In this day and age it's almost unfathomable that we even have to discuss whether or not it's appropriate, acceptable, or rude to intentionally exclude the one kid in class who is different from a celebration. Yet, that's exactly what happened recently when one mother poised the question to the subreddit that asks daily, "Am I The Asshole?"

She asked, "AITA for not making my daughter invite the special needs student in her class to her birthday party?" Maybe in some contrived way you could look at the question at face value and potentially answer, "well no," but don't worry, she elaborated in detail why she didn't "make" her daughter invite the child and it's honestly hard to stomach.

My daughter is in the second grade, her birthday is coming up and we have a pool party planned at our park district for her birthday with her classmates. One student in her class, let’s call him Tyler, is nonverbal autistic. I’ve met him a few times, and he’s a sweet kid, but yeah nonverbal autistic. He is in my daughters class partially but leaves midway through the day to go to a special program or something.

Accurate representation of her typing, "or something":

Now I told my daughter she can either invite all the girls, or the entire class. I am not letting her invite specific people and single anyone out. She ended up choosing the whole class, but my daughter, as respectfully as a second grader could be, asked me if it was okay if Tyler did not receive an invite. She said he’s barely in her class and doesn’t really know anyone, and it might be tough for him to be at a pool party.

At this point, most of us reading went:

Don't worry, she talked to other people and found herself totally perplexed.

I talked to my husband about this and we ended up deciding that she does not have to invite him. She has to give out her invitations through mail however, because I do not want him seeing her giving invitations out.

Anyways, I was talking about this at my work with a couple other nurses and a few of them thought I was being horrible by telling her she didn’t need to include the child with special needs. I said that I do not have any experience handling special needs children, and I didn’t know if he would need special assistance or even need his mom or a caretaker there the whole time. A coworker told me I made a huge mistake by “teaching my daughter that it’s okay to exclude those who are different”. Idk if I’d read that much into it.

And one more time, she asked, "AITA?"

The answers rolled in. Out of 2,500+ comments we found some of the most compelling responses worth sharing: 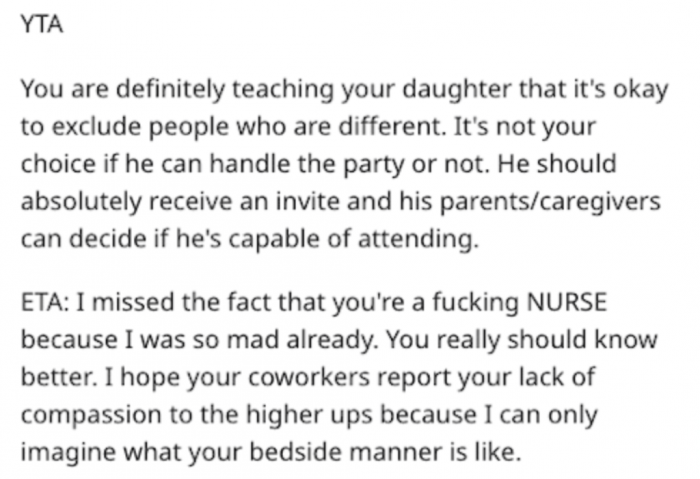 At least one person thought OP was redeemable.

Maybe he wouldn't have gone, he definitely would have been touched by the invite.

Being nonverbal does not equal incompetent. Lots of nonverbal autistic folks communicate lots of other, totally valid ways.

What a terrible lesson this person is teaching not only their daughter, but the whole classroom.

One person tried really hard to see OP's side of it.

I disagree with this person's empathy, though. This whole situation could have been handled better, period.

YTA = You're the asshole.

Because OP is definitely the asshole.