With bushfires still roaring out of control across Australia, the country is in crisis. Over 500 million animals have perished in the fires since September. However, amidst the tragedy, it is heartwarming to see communities coming together, and working closely arm in arm to support their country.

And it's not just people who are proving to be heroes during this devastating time. We have seen some truly incredible acts of bravery from animals as well.

Take, for example, Patsy - a 6-year-old border collie/kelpie cross, who saved an entire flock of sheep as her owner fought off flames as they were approaching their farm. 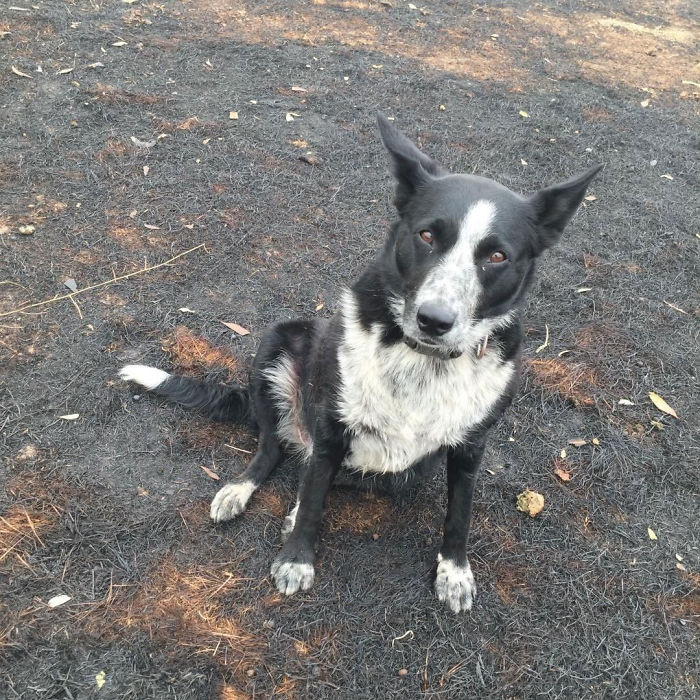 Patsy, nicknamed "Patsy The Wonderdog," is a hero according to her family.

She did an amazing job of helping her owner bring their sheep to safety amid the raging bushfires on their property in the town of Corryong, Victoria.

Patsy rounded up the sheep and brought them into a safe paddock whilst her owner was putting out the fires on the property.

Patsy's owner's sister, Cath says the situation in Corryong is "like Armageddon."

“Everyone is just trying to get water and feed to their animals, shoot the ones that can’t be saved, get temporary fences up to keep stock secure, and put out all the logs and stumps still burning. And there’s people who have nothing left but the clothes on their backs.”

“It’s unbelievable and it’s only going to get worse. That’s why we put Patsy’s story out there. People need something positive,” she said.

“However, the other side of the valley has not burned, and the weather conditions over the next few days (Friday and Saturday) are expected to be extremely dangerous for fires again. The original fire that started on 30 December 2019 is still burning out of control in the bush near Corryong and throughout North East Victoria. If the weather conditions are bad enough, the wind can blow embers from these fires for many miles and start new fires in unburned areas, like the other side of the valley and areas around Corryong that haven’t burned yet,” Cath explained.

“Another risk is that when embers blow ahead of a fire front, they can land in houses and buildings that may have made it through a previous fire, burning them down in a separate fire. The danger in a bushfire zone never really goes away, the risks just increase or decrease depending on the conditions any particular day. The good news is that the weather has been much better over the last few days, so there’s been an enormous amount of preparation by the firefighters and emergency services. Firebreaks and containment lines have been made at critical locations, more equipment and supplies have arrived, and more firefighters. Now, it’s a waiting game.”

“For Patsy, funnily enough the fires don’t really make much of a difference!" 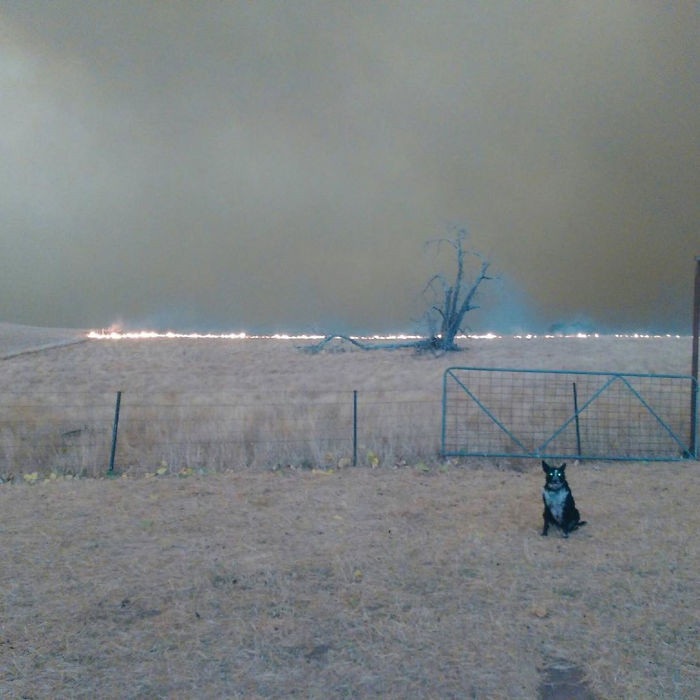 "She’s a border collie/kelpie cross, so she’s a working dog through and through. These dogs have been bred for generations to develop their ability to work with sheep and cattle on farms, and they are very intelligent and resilient animals,” Cath explained.

“They love to work, it’s just what they are bred to do, and they can be very focused and single-minded on the job! So when my brother needed Patsy to help bring the sheep into safety, that’s exactly what she did. She just got on with her job and did it, regardless of the conditions. Cool, calm, and collected. We think Patsy’s a hero dog, but we also think that most well trained and skilled working dogs would have done the same.”

Cath says that Patsy loves living life out on the farm.

“She also loves a good belly rub. Really, she just loves being on the farm and doing her job with my brother.”

“This crisis is going to go on for a long time yet, no matter what we do. These fires are the worst in living memory here, and our fire season is not even half over. Normally, in North East Victoria, the most dangerous months for fires are February and March, but these fires started in December. Along the East coast of Australia, other fires have been burning for literally months. Many areas have been in severe drought, and 2019 has now been identified as the hottest year on record in Australia (since European settlement)."

“This crisis is going to go on for a long time yet, no matter what we do. But the support from everyone, coming from literally all over the world, has been incredible and means so much to our community. If Patsy’s story helps put a smile on people’s faces, then that can only be a good thing! And if people would like to donate to bushfire relief, every little bit helps and will be greatly appreciated.”

Cath says her brother does not intend to evacuate due to the amount of livestock he has on his property. 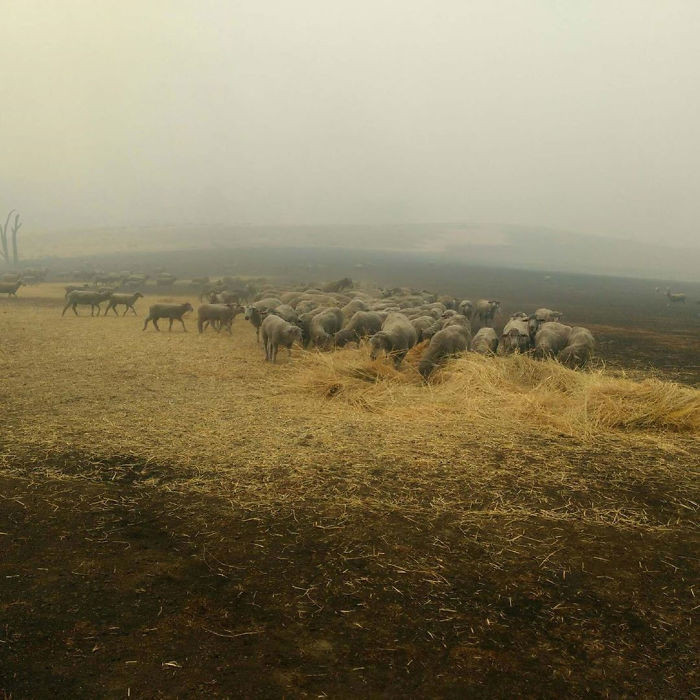 “He has nearly 1000 sheep to take care of and has already started cleaning up and making urgent repairs to the farm. He’ll stay on the farm to do what needs to be done. The time to evacuate is well before the fire comes, and that’s what my family and I did.”

“We were staying on the farm for Christmas and New Year with my brother, and when the call came through that spot fires were starting near our farm, my husband, kids and I evacuated to a house in Corryong and my brother stayed on the farm with Patsy to get the sheep into a safer paddock and protect them and the farmhouse from the fire. After we lost power and phone communications, we just had to wait until he came back. Longest and most worrying hours of my life.” 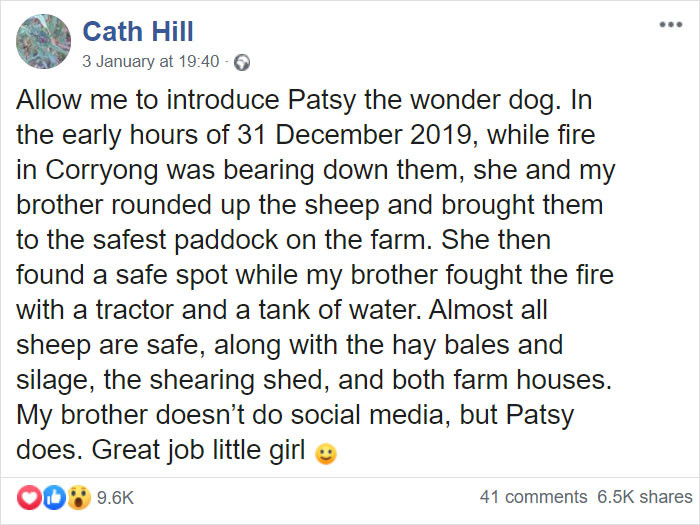 People have fallen in love with Patsy. 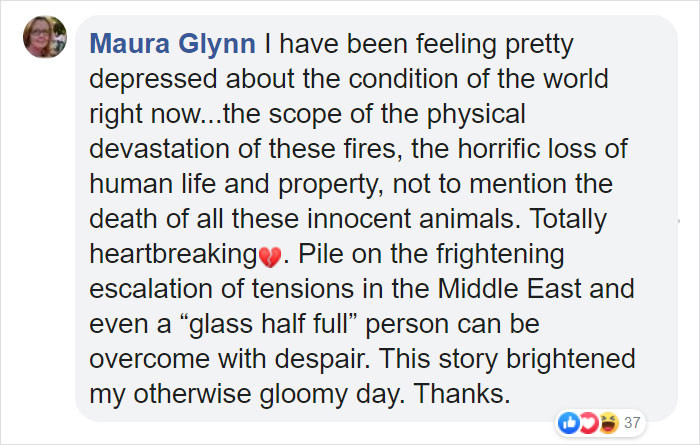 If you’d like to help out Australians in need of your help, there are several disaster relief and recovery efforts that you can donate to:

Patsy’s owner, would also love it if people could support these fundraisers:

Buy a coffee for a firie or a Corryong local