German illustrator Jenny-Jinya is famous for her heartbreaking comic strips. Some may call them tearjerkers, but they are above a realistic depiction of how cruel man is to animals. Her Instagram profile has 285K followers, and that proves that her comics are hitting the target, and she is raising awareness about animal cruelty, pollution, environmental hazards, and all of the other awful things we do to our planet and its inhabitants.

This time, the artist’s strip is about elephant rides. We are not aware that for the animals to be obedient, they have to be “broken” first. That means they are taken from their mothers at an early age, beaten continuously and terrorized to break their will…

We just don’t like to face the truth that animals suffer for our own amusement.

Maybe this Coronavirus lockdown will show us that we can settle for a lot less, and that there are just a few things in life we actually need, and that all the rest of comforts and privileges in our lives just come down to us raping the nature. Is it worth it?

The artist has published on her profile the strip about an elephant working in a tourist ride.

When asked about the inspiration for her latest strip, the illustrator said that she came across a photograph showing a captured baby elephant that made her cry. “It was tied up and seemed to scream in pain when the so-called trainers hit the poor creature.”

Jenny thinks that “if more tourists knew how elephants are tortured to make them submissive, perhaps fewer people would support these ’attractions.’” She also said that after her work went viral, she received many messages from people confessing they had ridden these animals in the past. “They had no idea how these animals were ’trained’“ 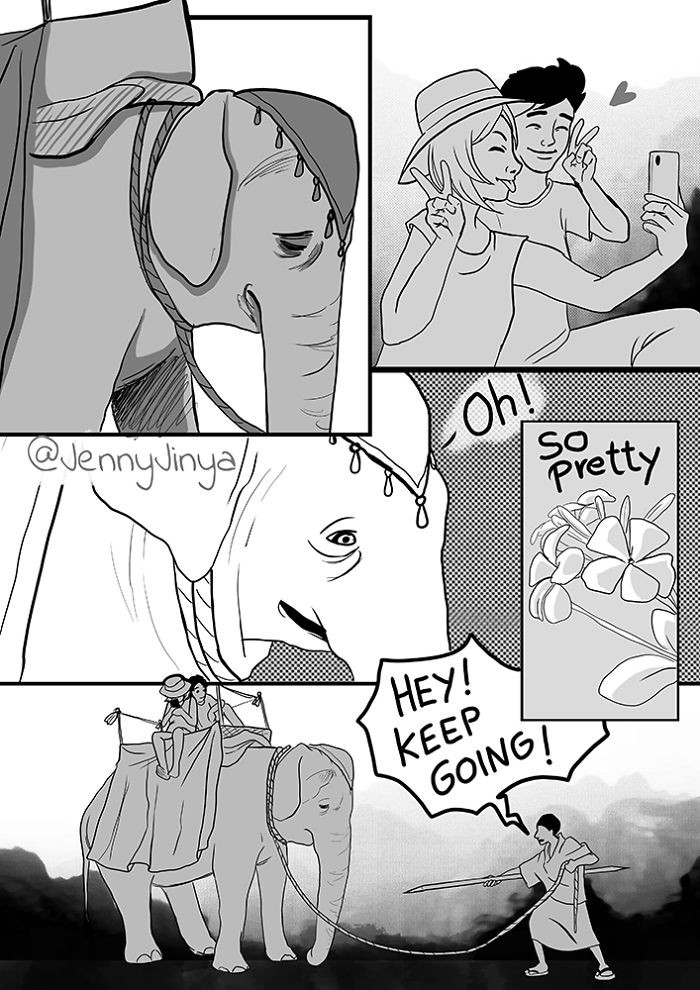 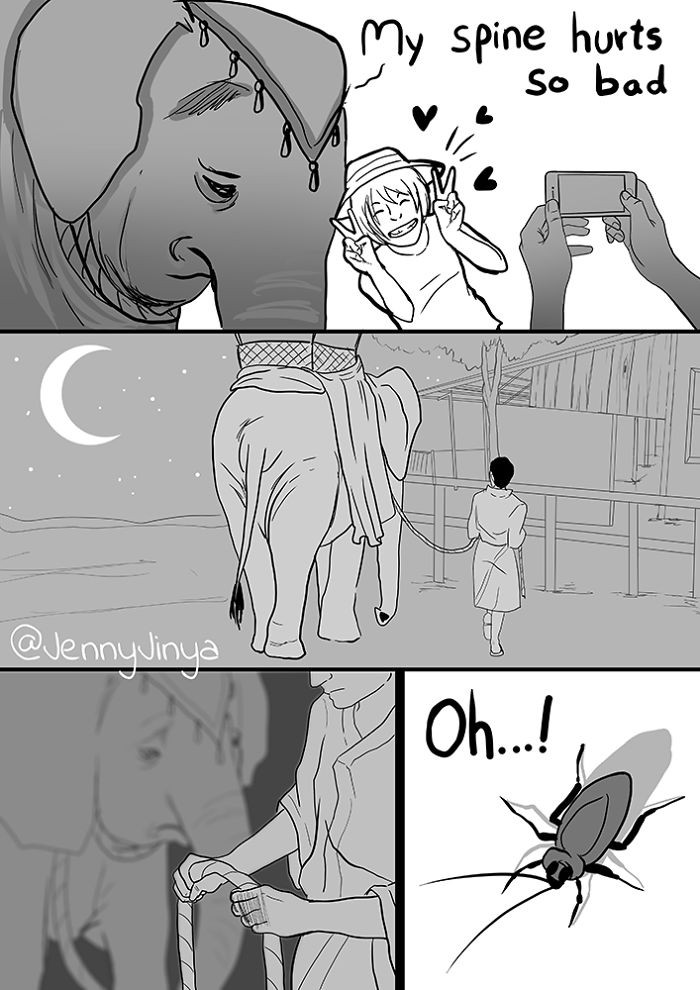 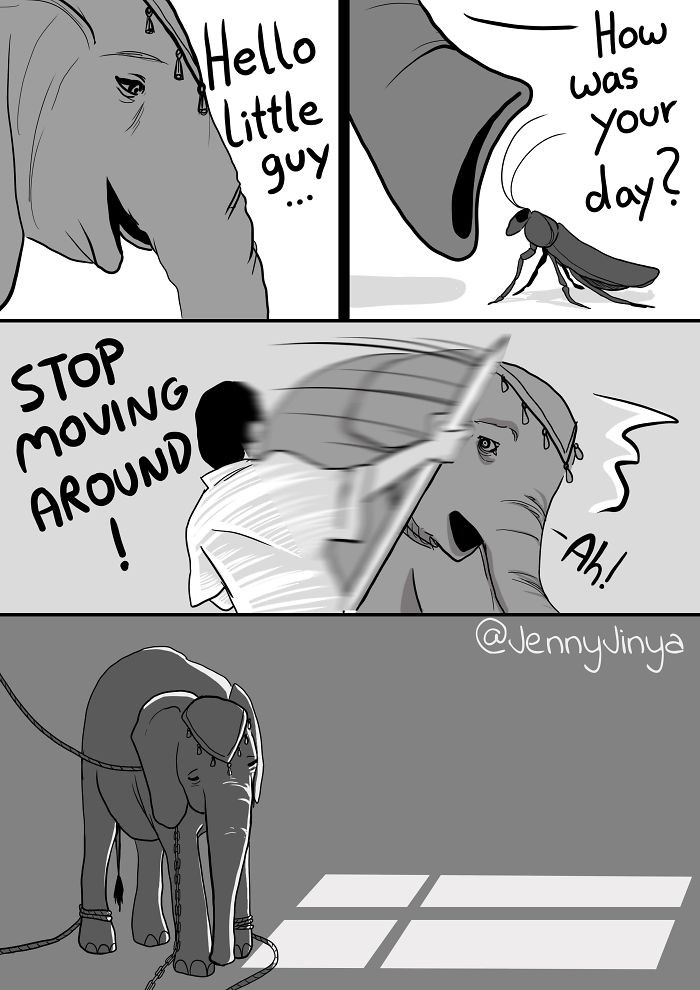 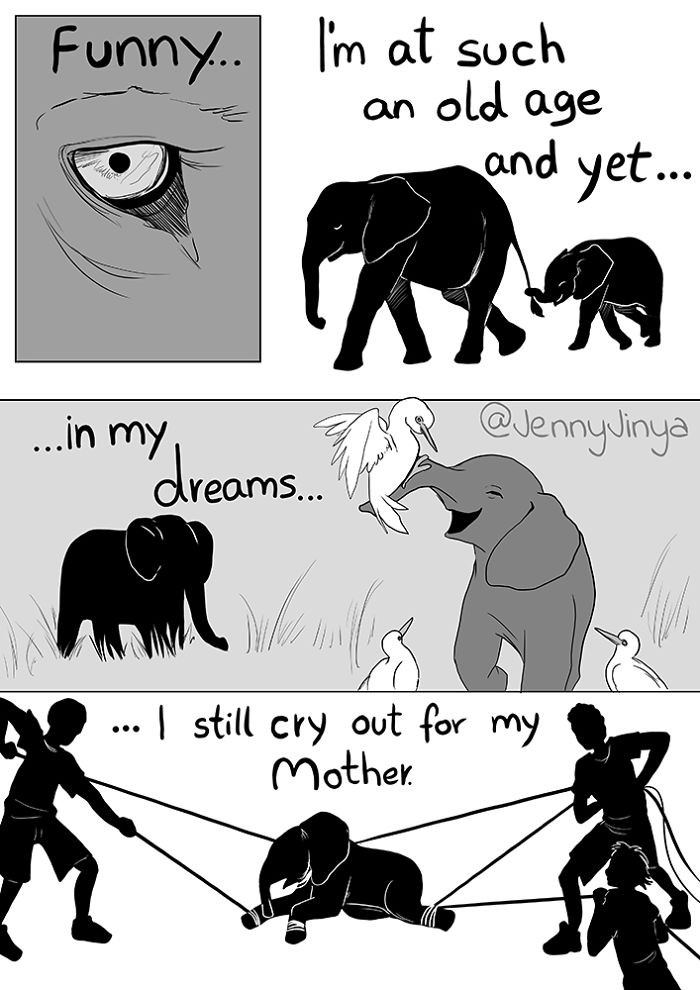 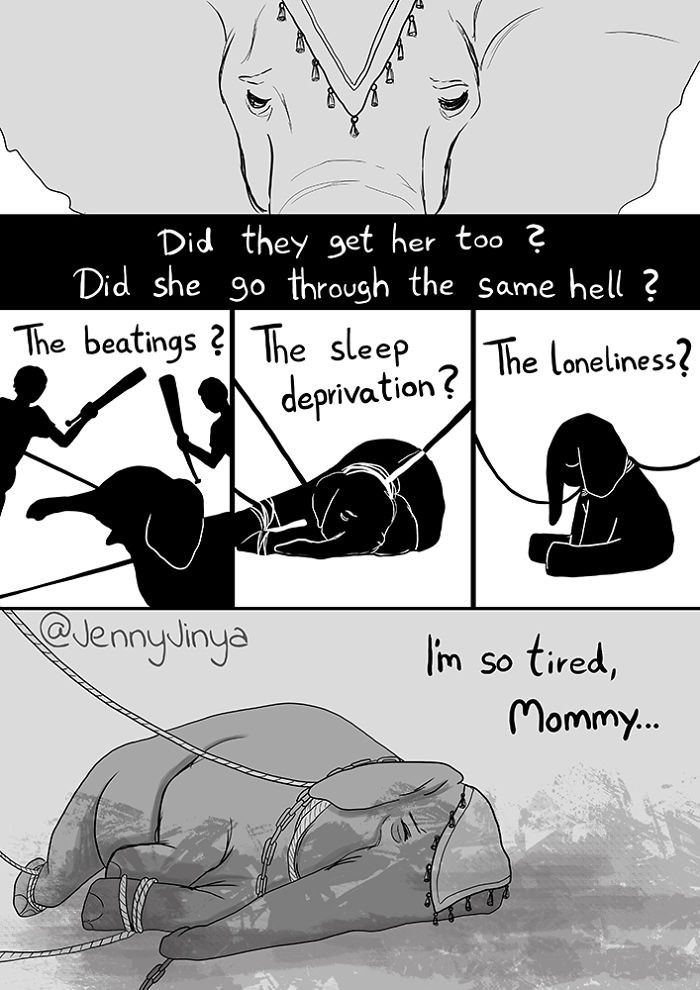 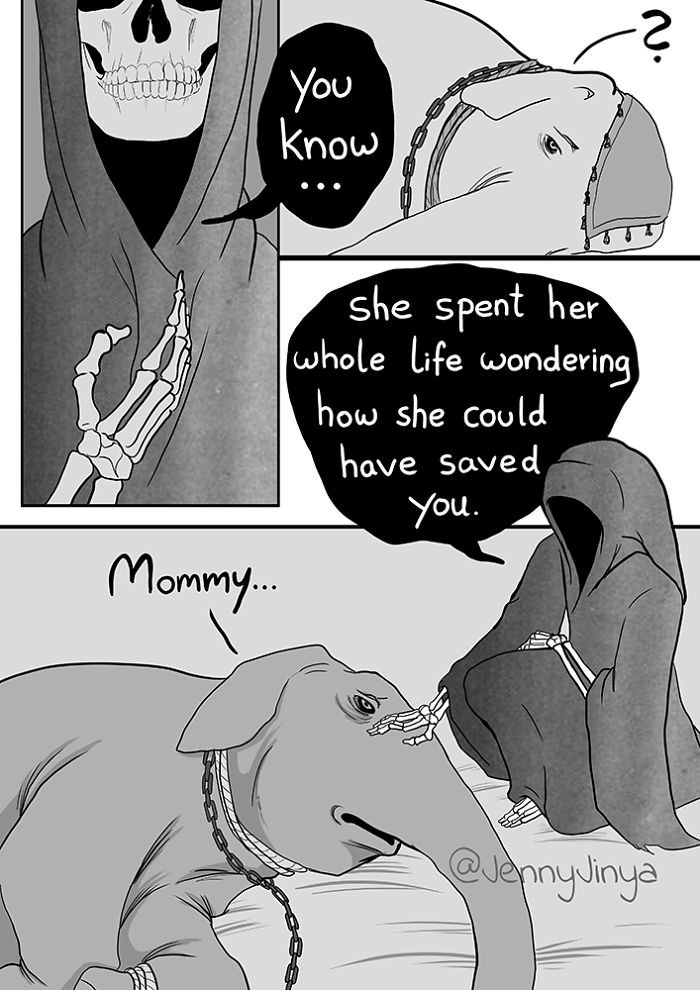 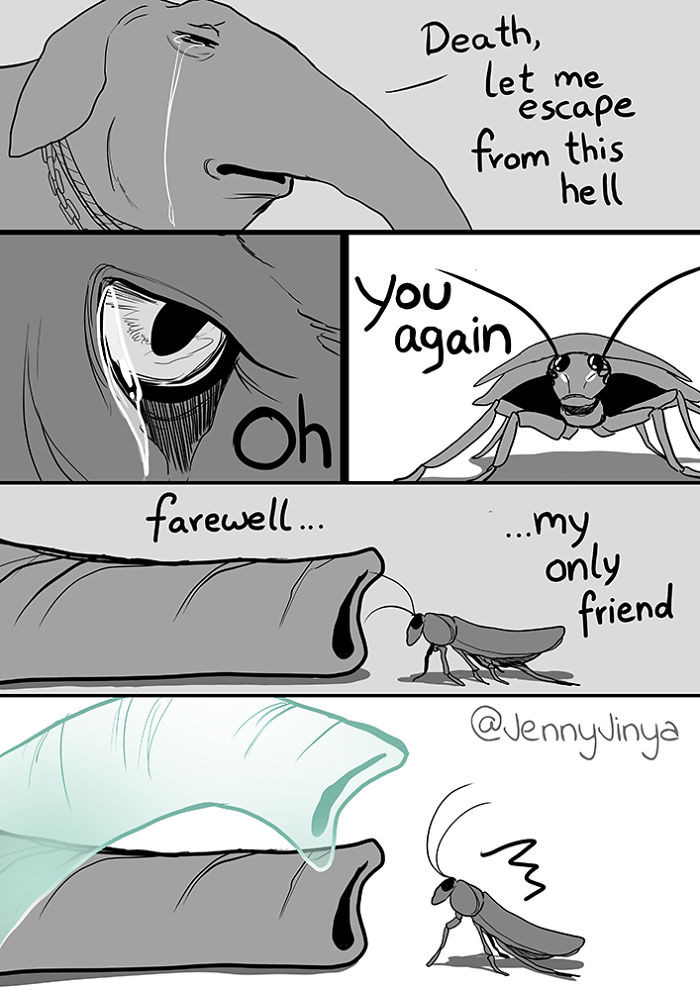 Jenny admitted that the entire process of illustrating such distressing stories is quite depressing. “Conducting research about the issue in question is always depressing enough, but when I sketch out the storyboard, a few tears run down my cheeks, too,” she said.

There are many reasons for animal cruelty. The artist says that “Some people think about profit, others are just poorly educated about certain topics, and some people might just have a crooked mentality.” But the artist firmly believes that educating people, helping shelters, creating petitions, and, most importantly - reducing the consumption of animal products can make the situation better. 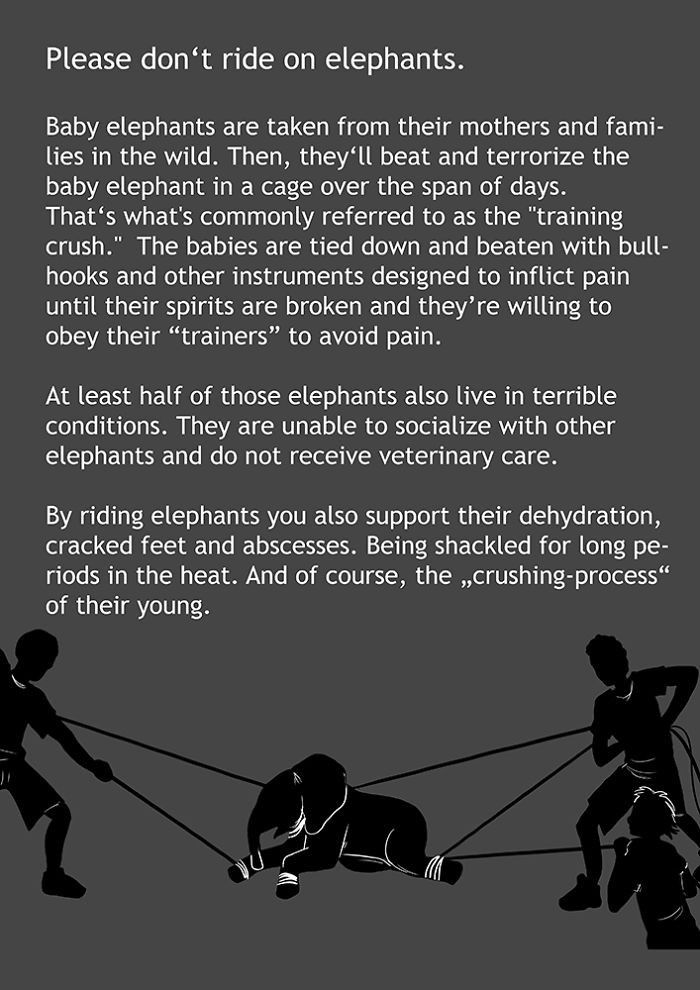 World Animal Protection states that the number of people who want to ride elephants for amusement is increasing. This increased the number of these animals taken from the wild and kept in captivity by 30% over the last five years.

In 2016, WAP examined 3000 elephants living across Laos, Nepal, Cambodia, Thailand, Sri Lanka, and some regions of India. Their research has shown that only 200 of were living in acceptable conditions in captivity. Dr. Jan Schmidt-Burbach, a global wildlife and animal health adviser at World Animal Protection (WAP), told BBC: “We want tourists to know that many of these elephants are taken from their mothers as babies, forced to endure harsh training and suffer poor living conditions throughout their life.”

Internet users shared how they feel about elephant riding: 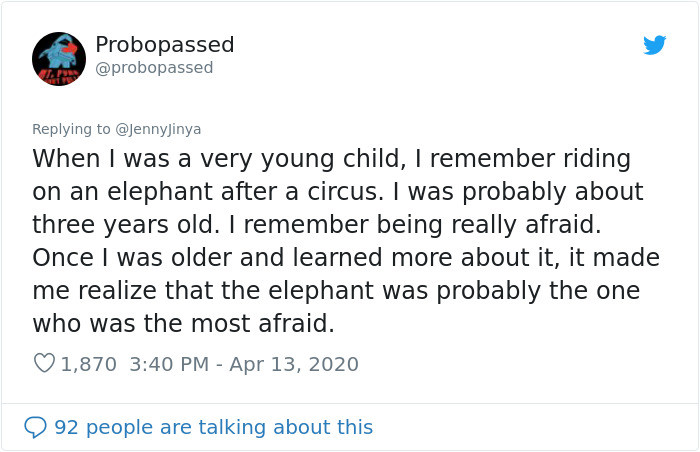 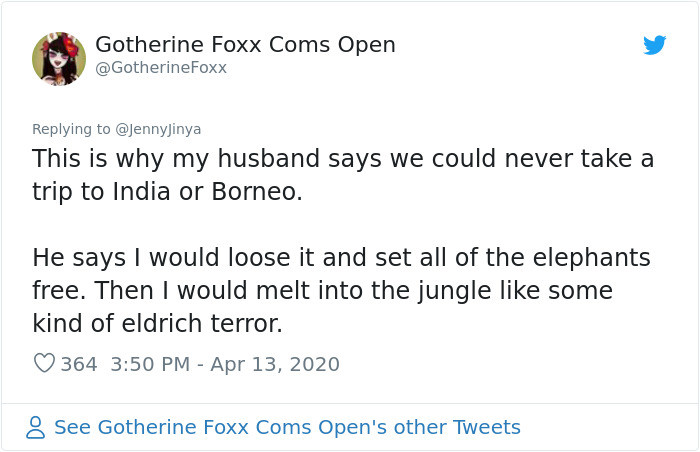 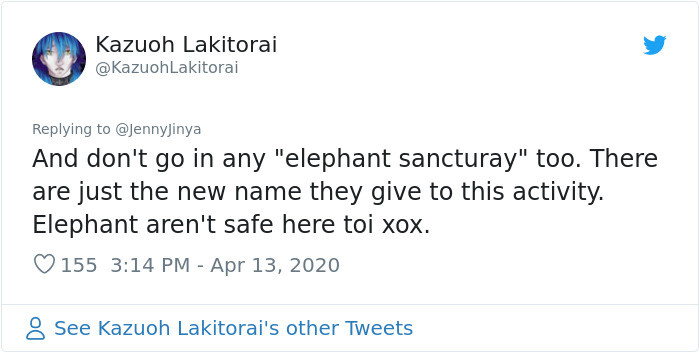 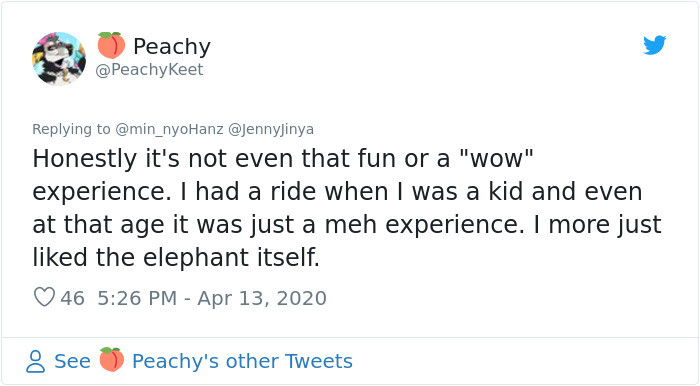 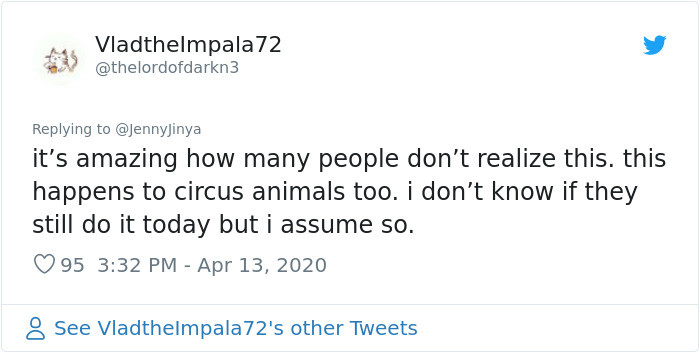 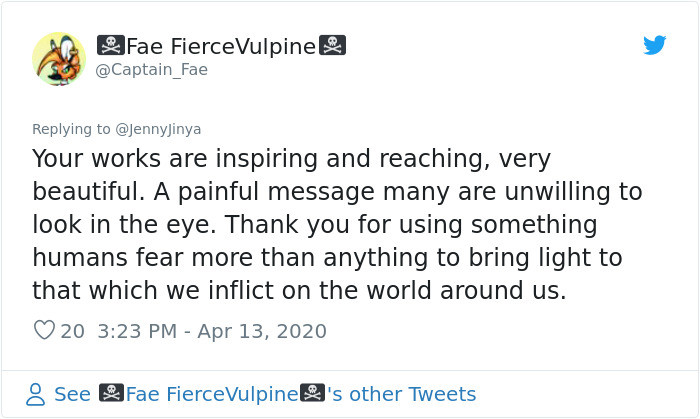 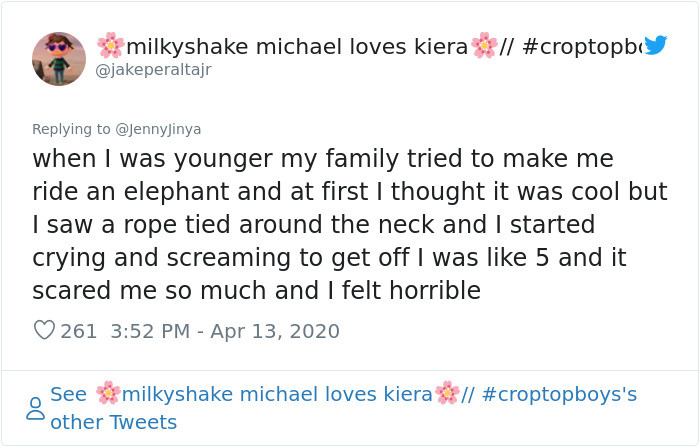 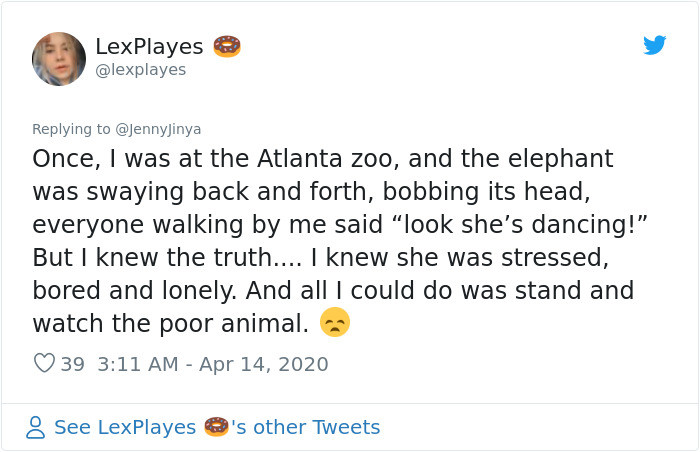 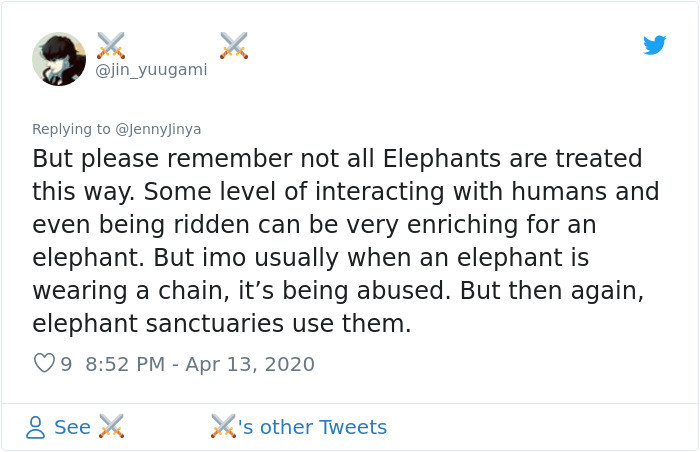