Are you ready for some startling facts on poverty? Nearly half of the entire world's population is living in poverty. That's over 3 billion people! Even worse, over 1 billion of those people are children. Even crazier, 80% of the world population lives on less than $10 a day. One of the most intense ways poverty affects people is with food, since most people simply cannot afford food. This leads to issues like children suffering from malnutrition, to the point of death, everywhere.

Suffice it to say, there are a lot of people who might have something to say when a celebrity gets on the Internet and starts offering up some wild ideas about how to address nutrition among poor people. Take Jamie Oliver, for example.

He is a popular chef well known for his easy and relatively healthy recipes but as he's noticed the rising levels of obesity in children he decided that the perfect solution was a "sugar tax." In theory, this tax would make the foods that lead to obesity too expensive and force people to buy healthier food options instead.

But it's not just a sugar tax that Oliver wants people to talk about, he takes major issues with the ease of advertising sugary snacks and sodas to children. It's a major part of the platform and a very relevant argument. In fact, Oliver also told MPs:

This a tax for good; this is a tax for love; this is designed to protect and give to the most disadvantaged communities.

He aims to see the tax money collected used to fund sports facilities and healthy eating clubs, both of which would be intended to support disadvantaged communities. Check out the video that sparked all the controversy:

Controversy is definitely the right word because an awful lot of people have come out to speak against Oliver's wild idea about taxing sugar. Whether or not your initial reaction is to cheer Oliver on, you definitely need to check out how one woman responded to his idea on Twitter. Sharing a deeply personal story about growing up in extreme poverty, her side of the coin paints a dark picture on ideas like Oliver's. 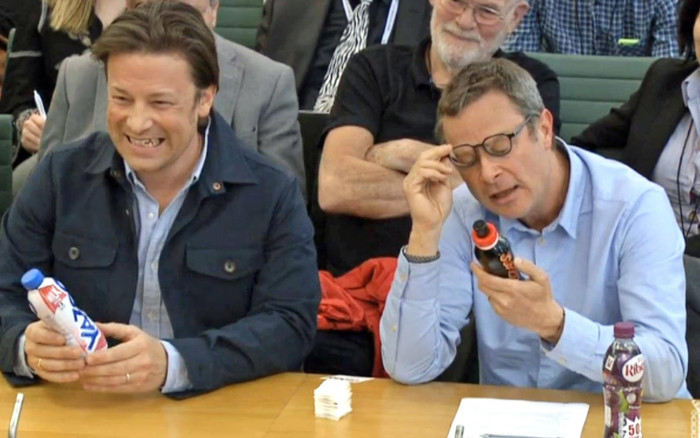 everyone knows my opinion on jamie oliver by now (insufferable bellend) but im still going to weigh in on this whole "make unhealthy food more expensive" thing from the perspective of a girl who was genuinely poor growing up and ate awfully:

from the age of about 6, my dad had to mostly raise me and my brother on his own as my mother cheated, left him and then became too violent and dangerous to even be allowed on our street. now when i say we were poor, i mean very poor. money given to me on birthdays often had to

be spent on food for us to survive. my dad met my mother in a psych ward after he was sectioned when they found him too depressed to function, with no possessions and the intent to die on a park bench near the hospital. so we had no rich relatives to live off growing up either.

be spent on food for us to survive. my dad met my mother in a psych ward after he was sectioned when they found him too depressed to function, with no possessions and the intent to die on a park bench near the hospital. so we had no rich relatives to live off growing up either.

he worked full time, and with two young kids this meant a lot of money was spent on our childcare. so that's more money gone, when we barely had enough to live on cheap food as it was. this meant quinoa and couscous was out of the question. in fact, we usually lived on whatever

was in the reduced section. even fruit and veg was too expensive, so my brother and i had to take multivitamins in order to get a lot of the things we needed. im seeing a lot of people go "well tinned veg is cheap, you're just lazy!"

which is all very easy to say when you're a 20 year old student who has never had a full time job or a lot of bills to pay. when you're a young father with severe depression working countless hours in a tiring job coming home to two young kids while having to fear for your life

because your ex wife leaves you 150 threatening voicemails a day and keeps violating her restraining order, going as far as to attempt to run you over, have your kids abducted and smash the glass in your door, all while struggling intensely financially, would YOU have the

energy to cook a nutritious meal from scratch? when you're getting 4 hours sleep a night on an old couch because you're worried if you sleep in your bed that you won't hear if anyone tries to break in? ill answer that for you: absolutely fucking not.

at the end of the day, me and my brother had no significant health problems caused by our diet. my dad always tried his absolute hardest. most working class parents are incredibly conscious about the wellbeing of their children.

the reason these parents buy junk food is this: because it's all they can afford, and they are TIRED trying to make ends meet which impedes their ability to cook from scratch. many are also depressed/disabled which makes it even harder to cook.

if they had raised prices on sugary and fatty foods when i was a kid, we wouldn't have eaten. plain and simple. in my humble opinion, it's much better for a kid to eat a pizza than not eat a damn thing.

if you GENUINELY want to make a difference in the lives of these families, here are some things you should actually ask the government to do:

-more affordable housing so they have more money to spend on food instead of rent
-fund more free adult education so that parents who are able can study a skill which will help them earn more money
-stop fucking cutting nhs physical and mental health services, if ill parents get

She quickly got support, too.

💗💗 props to your Dad and you both!!! 👏🏻 completely agree - if they stopped jumping straight to laziness, ‘greedy teenagers’ etc etc and started looking at the serious serious funding and social issues affecting people we would maybe get somewhere

And another person thinks Oliver just doesn't get "it." 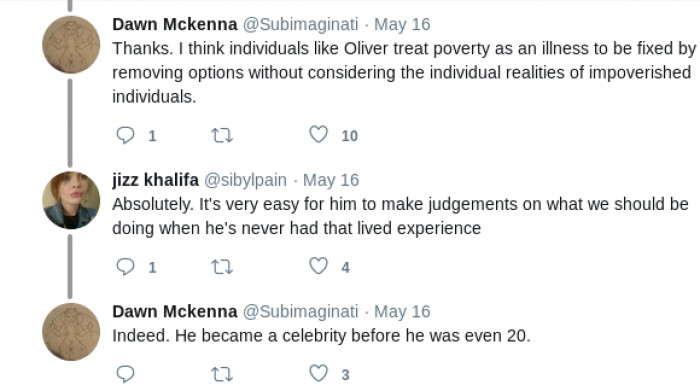 Because of her boldness, other people not only supported her but chimed in with their own experiences growing up in poverty.

I am so glad you wrote this thread!! I grew up with 2 working class parents. My mum was struggling with severe anxiety and depression and my dad worked fulltime but also has depression. My sister and I grew up on quite a lot of cheap and not necessarily nutritious foods...

Neither of us were overweight or physically unwell. I think it is so easy to shame parents. My mum was struggling and the last thing she wanted to think about was cooking a meal from scratch. We never went hungry, though, and that would have happened if food prices were higher.

It's incredibly easy to judge families but my parents always tried their hardest to keep us fed. If that meant spaghetti hoops and instant mash and cheap chocolate biscuits, so be it.

Not to mention some general scoffing at the typical idea the typical wealthy person has regarding the solution to obesity and poverty.

This is always the answer wealthy people suggest. Make things more expensive so poor people can't have them.

We also cannot overlook the criticism of Jamie Oliver that was flooding in. People weren't too keen to hear from him, it seems!

I'll never forget the time he moaned about British workers being lazy because his employees didn't want to work the 80 hour (!) weeks that he did (for a business that he directly owns and profits from).

Now it's your turn to tell us what you think! Is Jamie Oliver on to something? Or is this just another way to bring down poor people and blame them for their problems instead of offering up a real solution? Let us know!