Keanu Reeves doesn’t really care if he is not on your wedding list, he might just show up.

Unlikely some other wedding crashers, he always gets a warm welcome.

Like Bill Murray and some other movie stars before him, this actor seems to really like to show unexpected at weddings that he isn't invited to.

Recently, the coolest guy in Hollywood, and basically the Galaxy, took a quick photo with Jarrod Camara and Leslie Walker just before their ceremony at the Dream Inn in Santa Cruz, California. It quickly reached the Reddit front page, and it’s easy to see why: Reeves was extremely emotional. 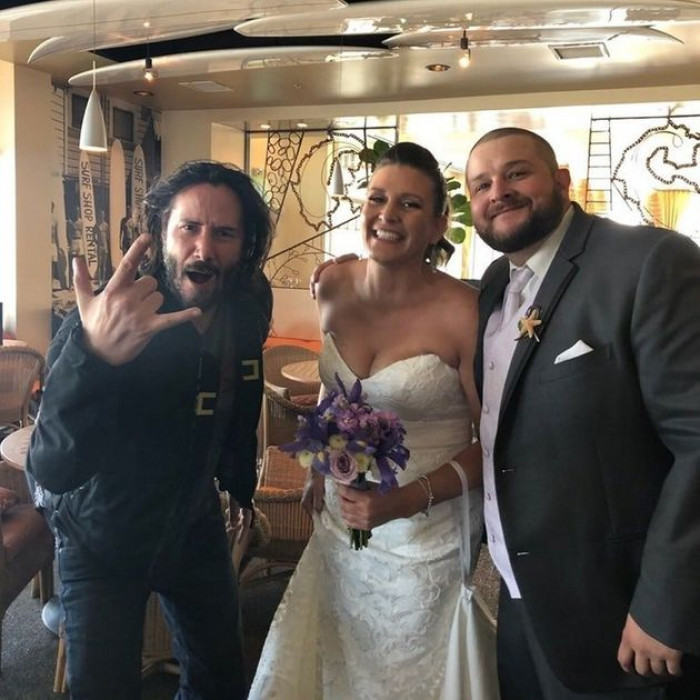 Jordan Camara, the groom’s brother, told the reporters that the wedding guests noticed Reeves downstairs at the hotel’s bar. They just couldn’t resist asking for a photo, and apparently, the actor was very nice.

“My brother went over and Keanu got right up and shook everyone’s hands and then did that awesome pose for the picture,” Camara says. “He was just as calm and cool as you would think he’d be, and he was happy to take a picture with them.”

And this wasn’t the first wedding picture in which Reeves has appeared lately. Last week, A couple that was getting married in New York had the same opportunity.

Kilt or no kilt, Keanu is properly dressed for a wedding each time.

The actor is currently promoting his new rom-com “Destination Wedding.” Could all of this be a publicity stunt? It may be the reason, but who cares? Everyone is happy when he is doing it.

Best #Wedding Picture EVER!
Moray & Maura recently got hitched in New York and were #photobombed by a rather scruffy chap passing by.
We think Moray looks way better than #KeanuReeves in his stylish @slanjkilts Modern Inglis #tartan #kilt and Midnight Blue Crail kilt outfit!! pic.twitter.com/tL5vqG2DL7

What do you think? Would you be pleased if Keanu turned up on your special day?