Children love to get everyone's attention and very often, they throw tantrums to get what they want. But as parents, is there a need to give in to these tantrums?

Parents find it frustrating to deal with temper tantrums. One child wants a toy, and if he does not get what he wants, the child whines and cries all his might until he gets it and some parents find themselves terrified of their child's behavior, and their immediate resolution is to give them whatever they want.

That should, however, serve as a caveat for parents because you may end up rewarding the wrong behavior instead of correcting it. By giving in to your child's tantrums, he would think that what he did was right and would more likely do it again whenever he needs to get something.

On the other hand, ignoring such behavior would send your child a message that it's not easy to get what he wants. It would be less likely for your child to show the same behavior again.

But for this man's nephew, throwing a tantrum is normal, and his parents easily give in to what he desires. When the child's family went to his home for Thanksgiving, he came to witness with his very own eyes his nephew's misbehavior.

Sadly, his brother confronted him for not giving one of his son's toys to his nephew and blamed him for the outburst of emotion. Find out how the community reacted when he asked if he was an a**h*le or not for not tolerating his nephew's behavior.

Here's the first part of the story.

His nephew played non-top with his 2-year-old son's toy truck and wanted to keep it for himself. His brother immediately said that he would replace it.

This guy, however, refused to give the toy to his nephew. Aside from being way too old for that kind of toy, he does not want to tolerate his behavior. 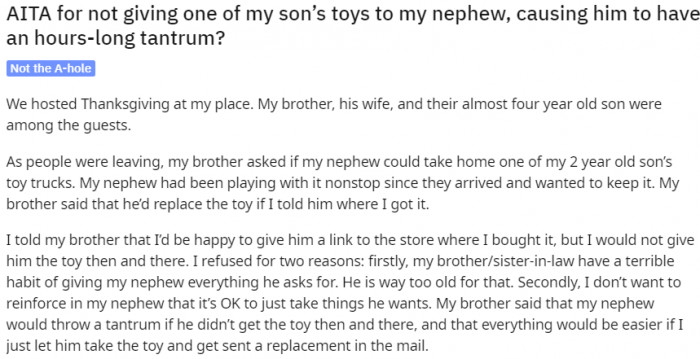 This guy refused to be an enabler of his nephew's behavior.

As the child did not get what he wanted, he started throwing a tantrum that caused them (the family) to leave. The guy then received a message from his brother blaming him for what happened.

His brother told him that for the entire three-hour tip on their way home, his nephew screamed his head off. He then passed out from too much exhaustion.

Guess what happened. His brother also accused him of triggering a tantrum and 'backseat parenting'.

Here are some of the comments posted by the community. 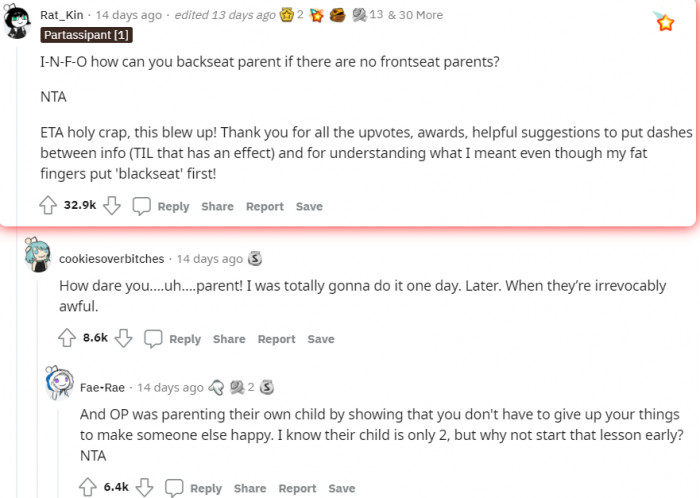 NTA. How can you teach your kids good behavior when you're indirectly reinforcing them for their bad behavior? 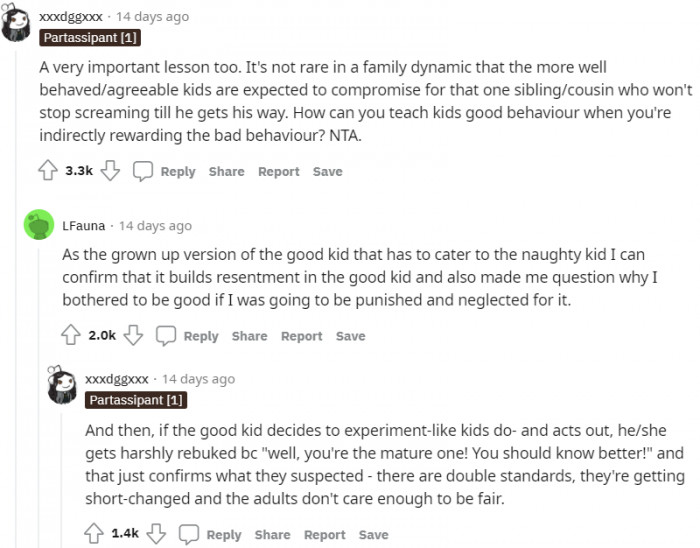 NTA. The parents are awful! 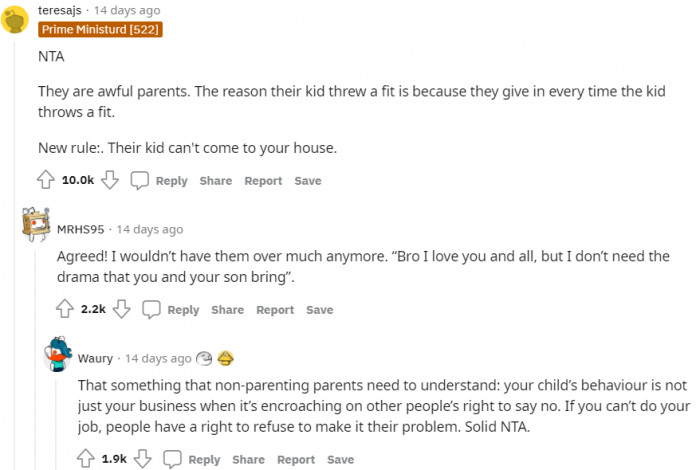 NTA. The 3-hour tantrum is his brother's fault. 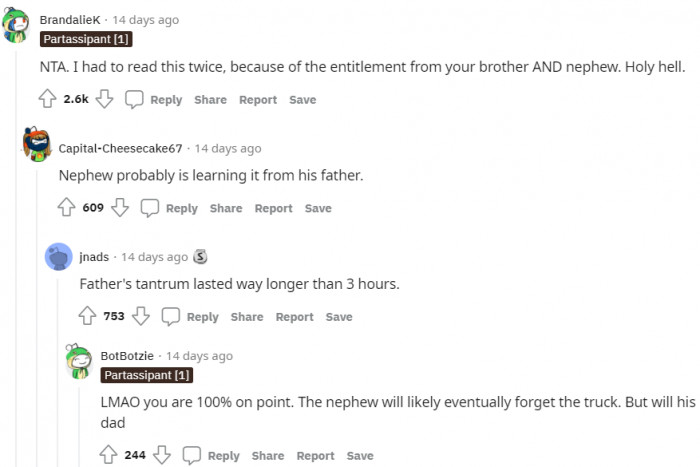 NTA. Boundaries should be set. 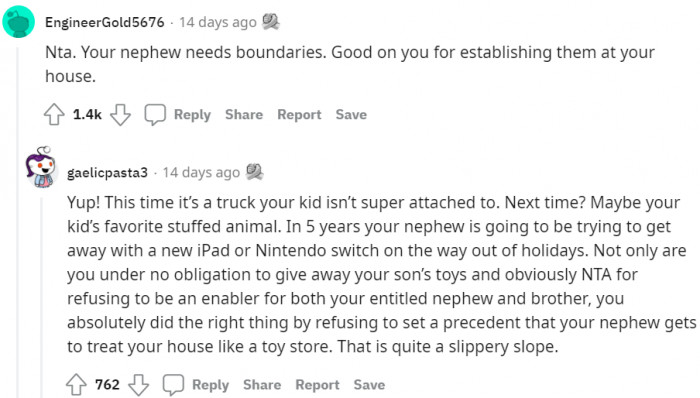 NTA for not being an enabler. 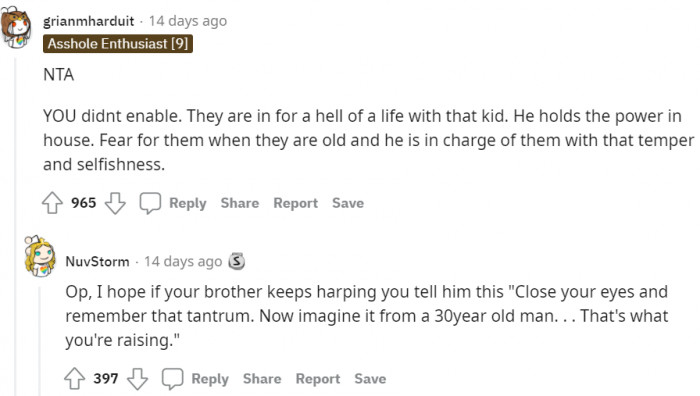 NTA. But TAs are the child's parents. 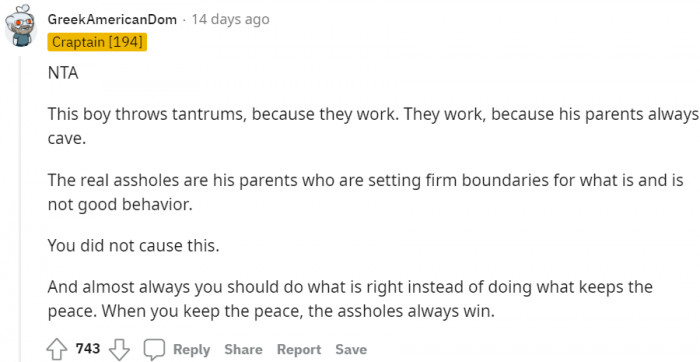 The child's parents are wrong for blaming the guy for their child's misbehavior. 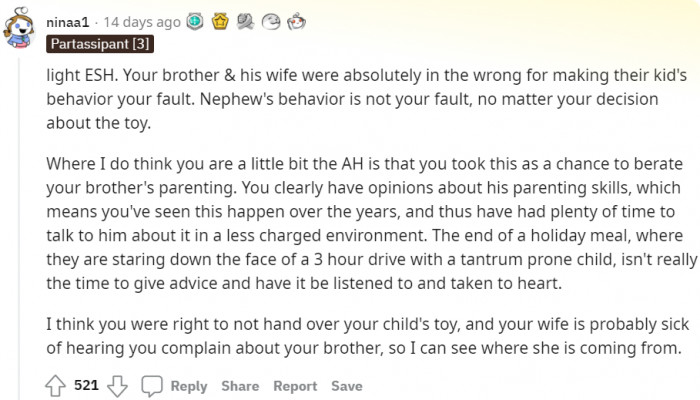 For some, he was TA if the child has autism as a 3-hour tantrum is no longer normal. 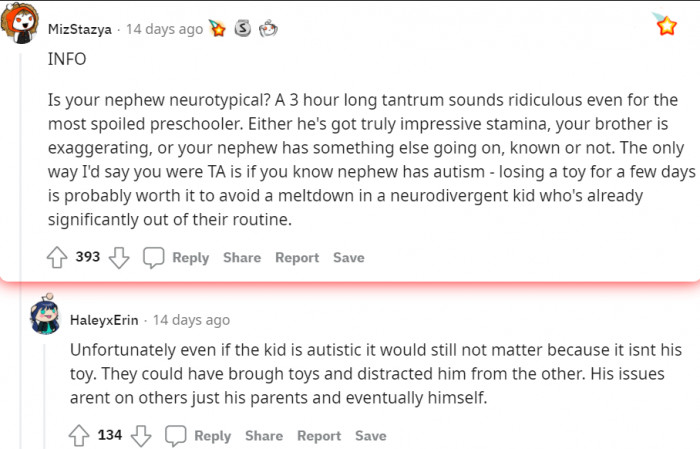 NTA. "No is a complete sentence." 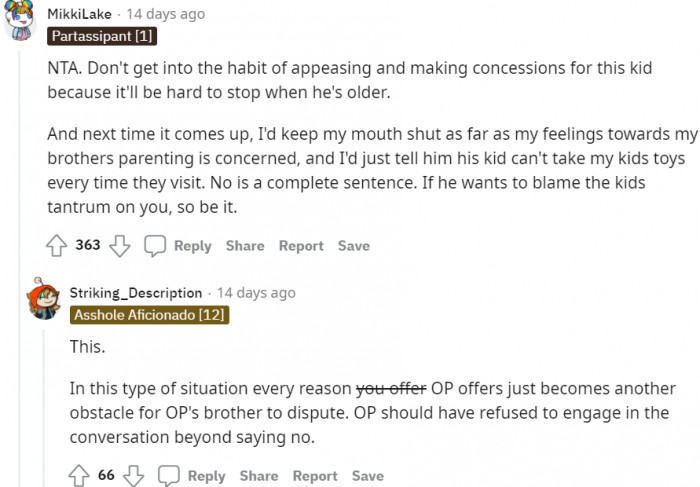 NTA. LOL, the guy was told to do the same thing when he would visit his brother's house. 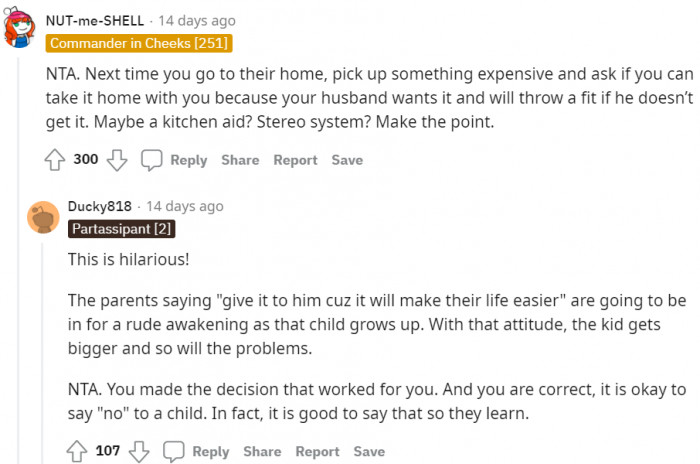 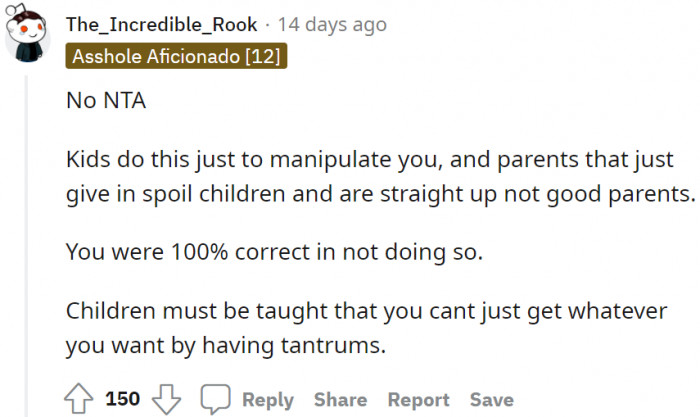 NTA. It was easier to blame the uncle than admitting they are terrible parents. 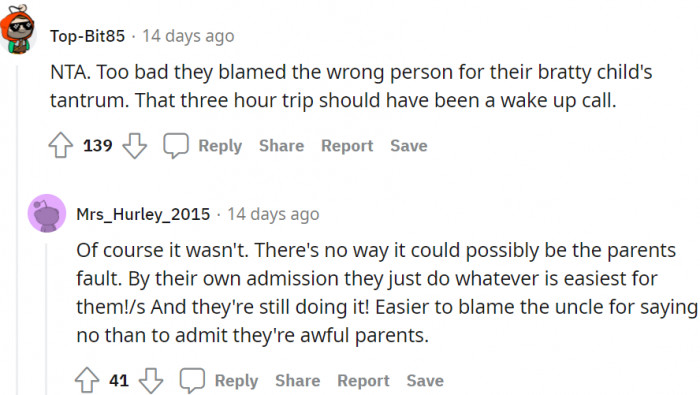 This one here is asking if the child has been tested for neuro-diversity. 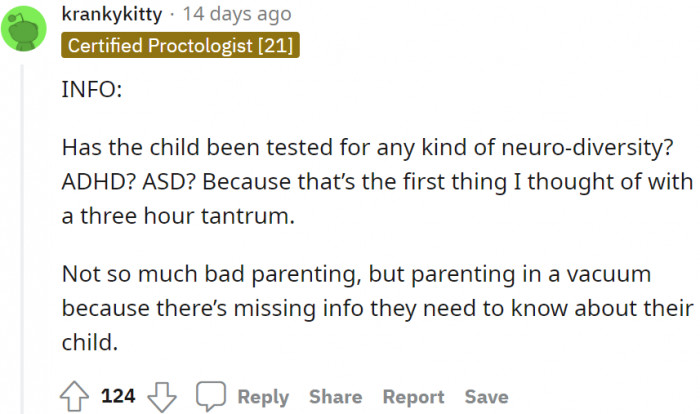 Nobody's TA as it looks like the child has some kind of autism. 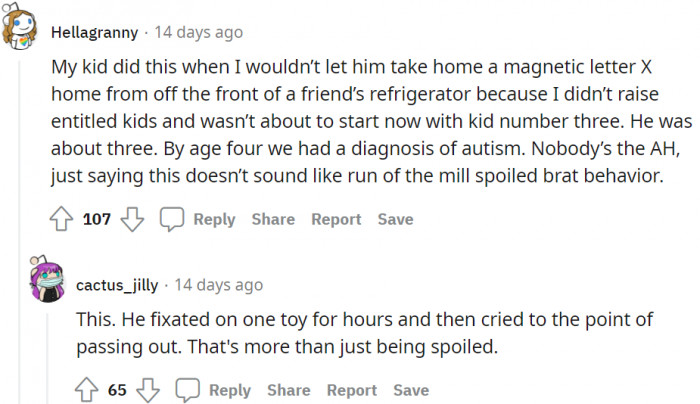 NTA. The parents have raised their child to be a brat. 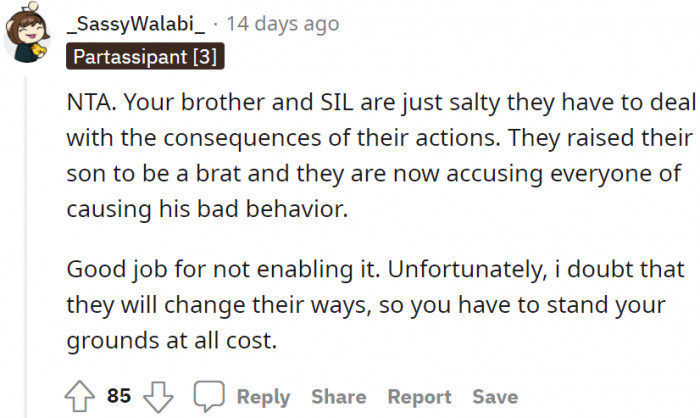 NTA but notice the 3-hour tantrum, which possibly means it could be associated with some condition. 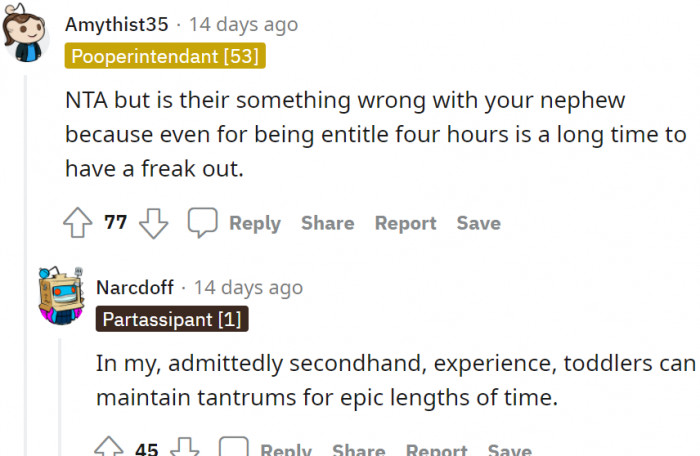 The kid must be autistic with hyper-attachment or hyper-focus issues.

YTA. It was Thanksgiving, and the kid fell in love with the truck. 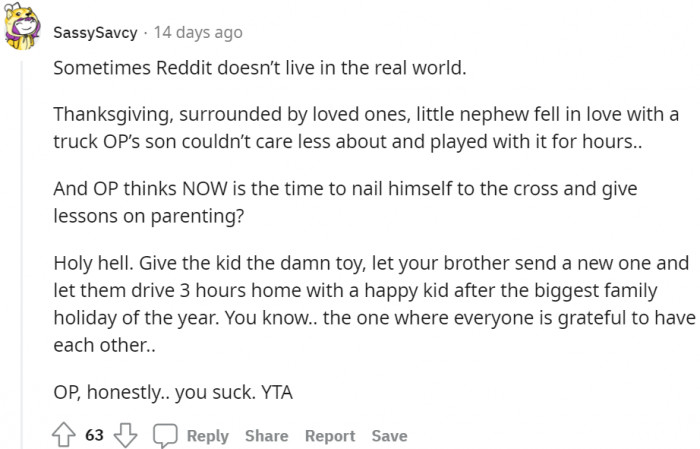 After consolidating the responses, most people praised the guy for not being an enabler of bad behavior. There were also those who thought that he was TA for it was Thanksgiving anyway.

Families gather to be happy, catch up with life, and exchange gifts with one another. But this guy cut the happiness of one kid who played with the toy truck for hours.

In case they have no idea yet, the parents and even this guy, are warned of the possibility that the child might be autistic. It's a blessing in disguise so that psychological, as well as medical intervention, can be given.