I missed the whole Tinder/Plenty of Fish/Hinge/Bumble dating-app 'thing'. I met my now husband over 11 years ago and we've been married for 6 of those. Despite missing the entire Tinder explosion, I have many single friends and I have heard it ALL.

Plenty of my friends have met great, nice, kind and successful guys who're good looking and great to be around... but they're short. If I had a dollar for every time I heard women complaining about guys they like being too short, I'd probably have a couple thousand dollars.

I don't know why it's a big deal, but it is, and I hate to say this, it even is for me. There's a photo of me and my husband at our wedding and, even though he is taller than me, I look taller in the photo... and I hate it. I wish I knew why, but I don't. It's like society has conditioned me (and everyone else) to think that men NEED to be taller and it's stupid, because really.... who cares? I'm sure there's some biology based reason behind why women are attracted to taller men, but if you found a short guy you really liked, is it worth letting him go to be alone?

Recently, Twitter user Lizz Adams (a tall girl) shared a photo of her and her "5'5 King". She implored other women to do the same, stating her husband is amazing to her, while many women seeking tall men are constantly mistreated in their quest their ever illusive 6'2 soul-mate.

Check out there replies below... they may have you rethink your 'over 6ft tall' rule. 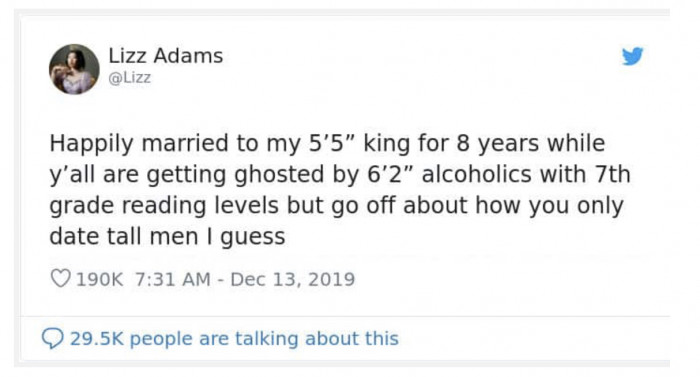 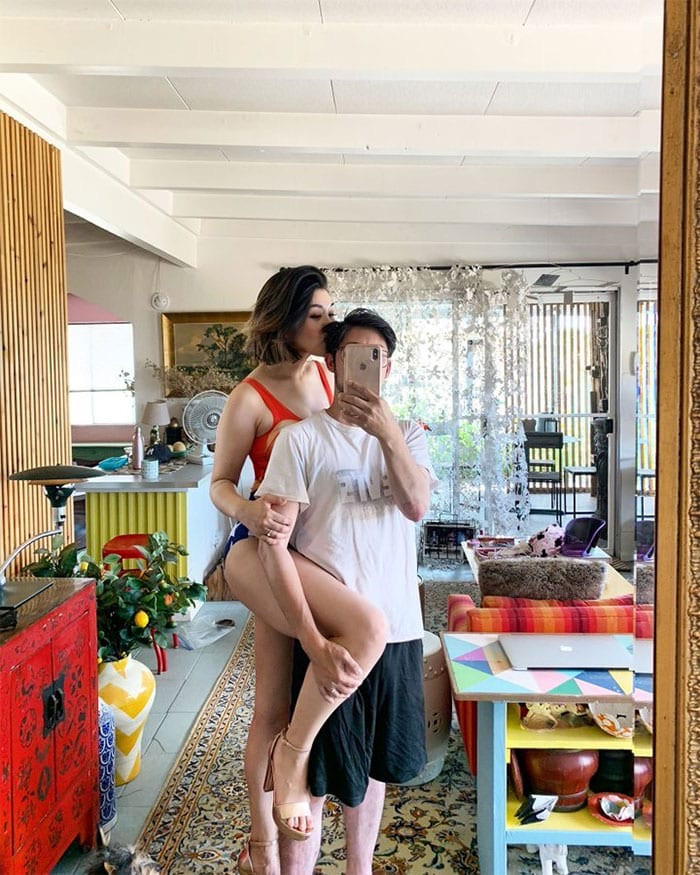 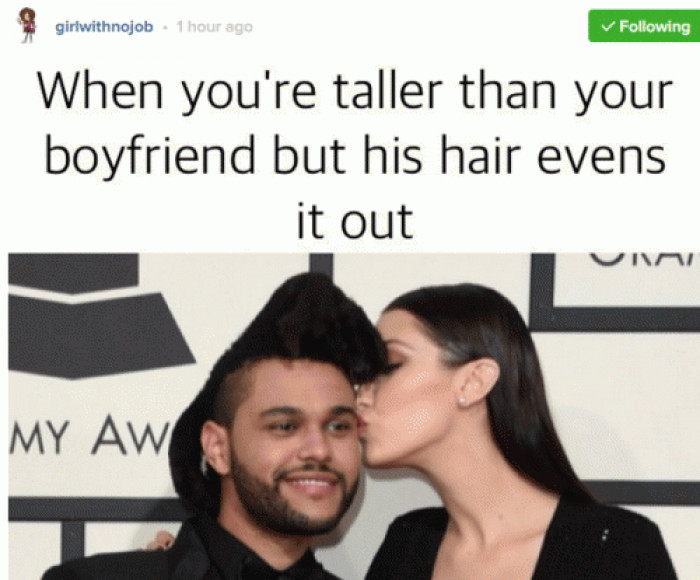 The replies then began: 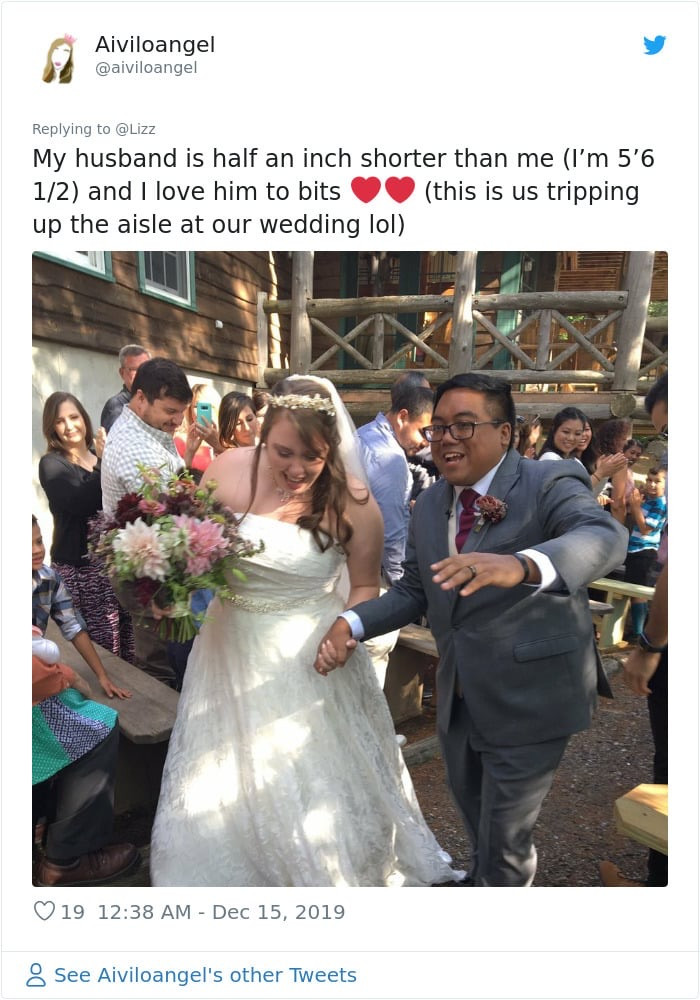 Katie Holmes and Tom Cruise were an iconic tall/short couple... 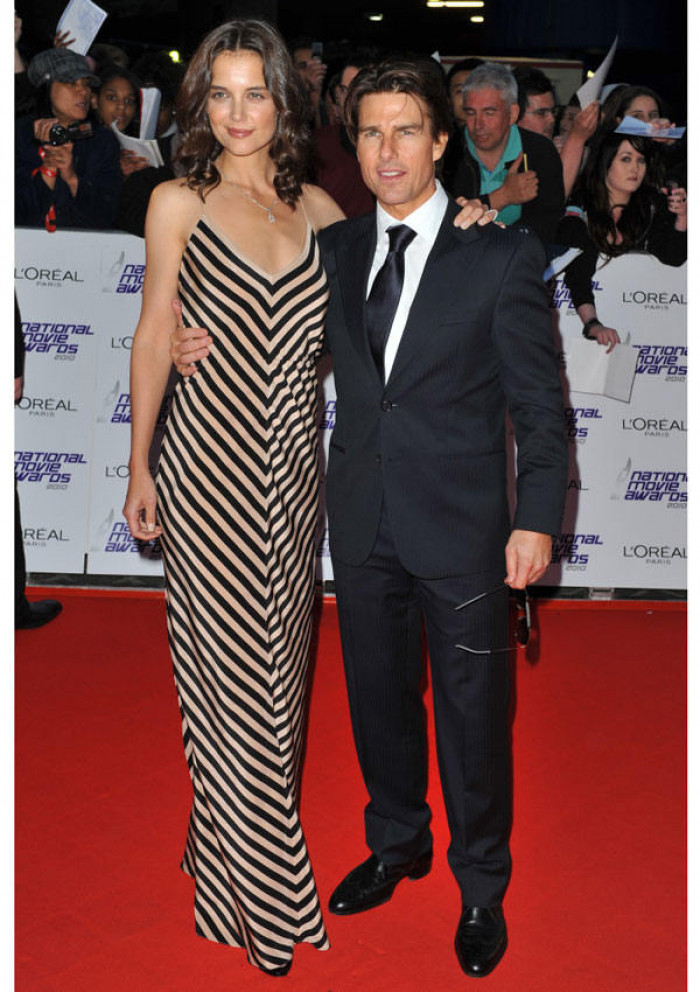 This couple are both tall, but she is taller, especially with heels. 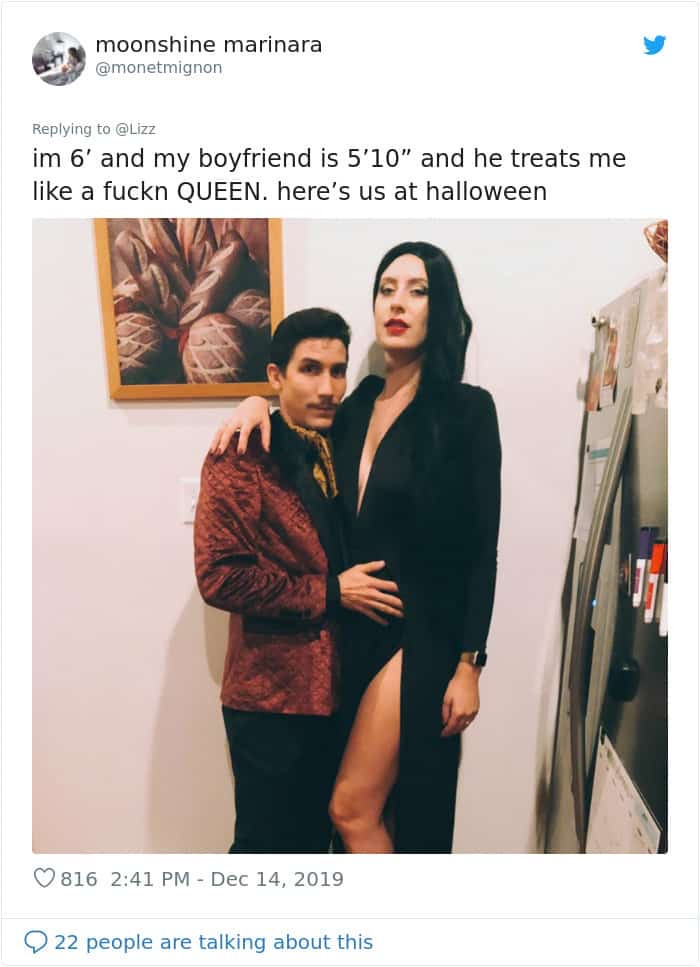 This women calls her man her 'smol boy'. Love it. 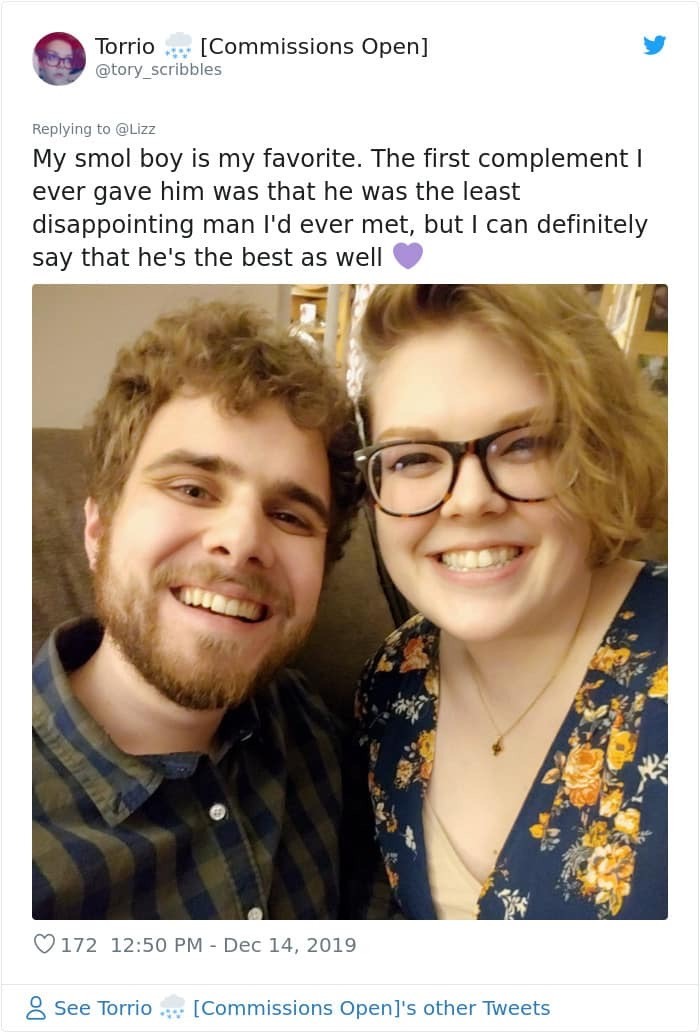 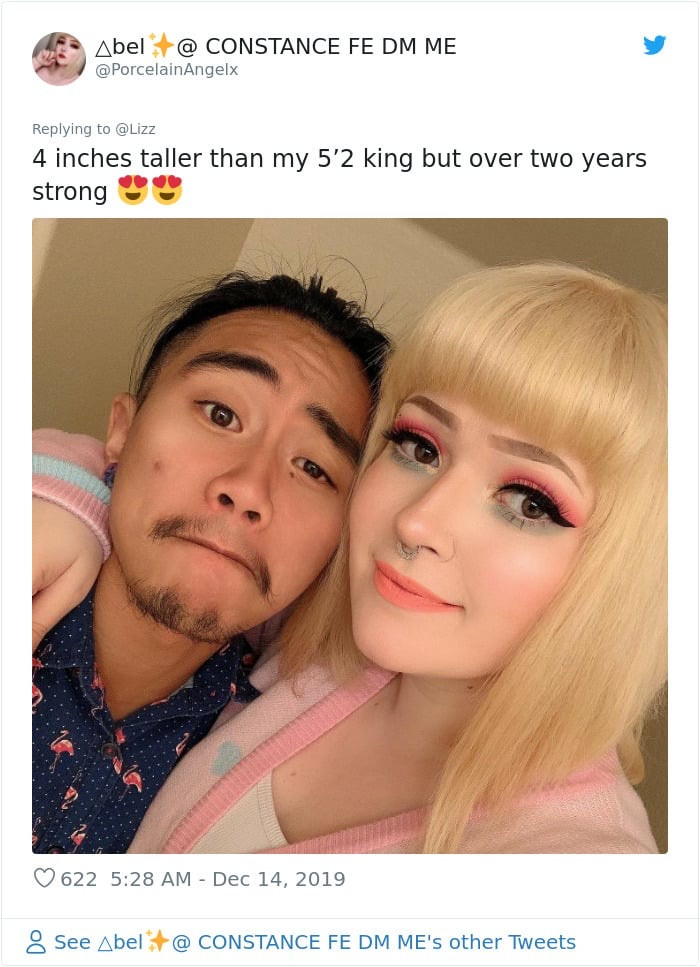 This guy replied saying he is 5'2 and his wife is much taller... 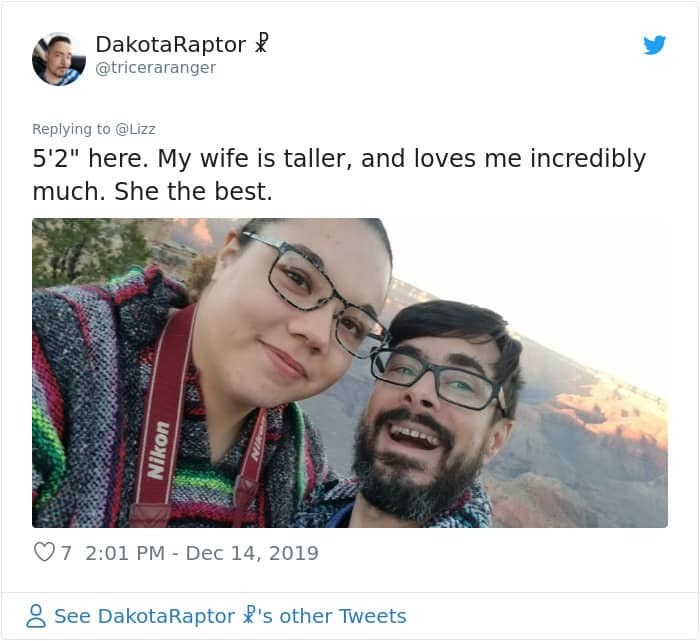 These two just have fun with it 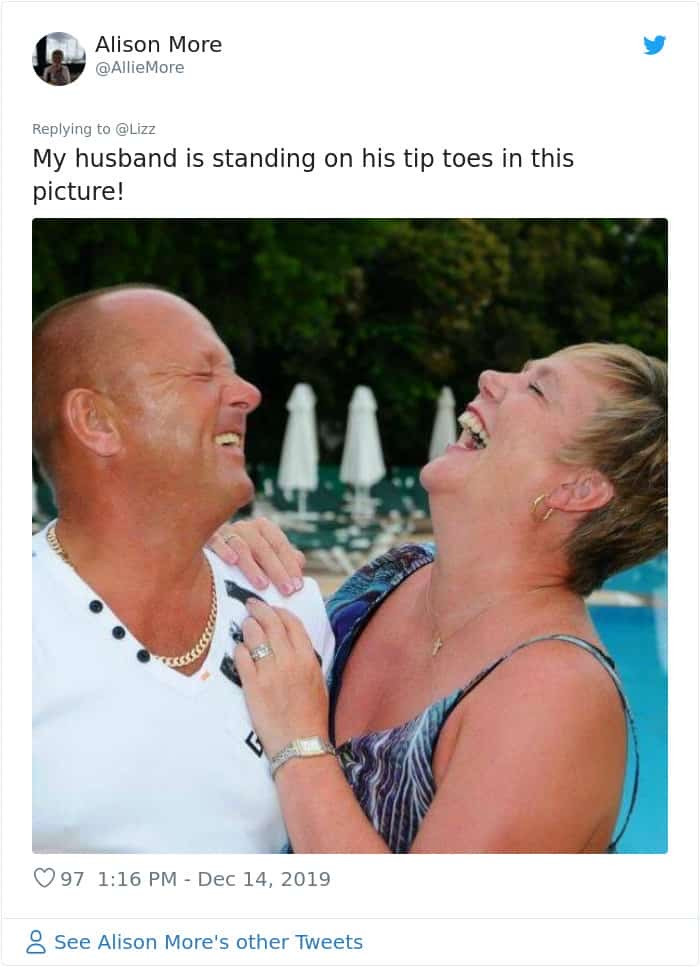 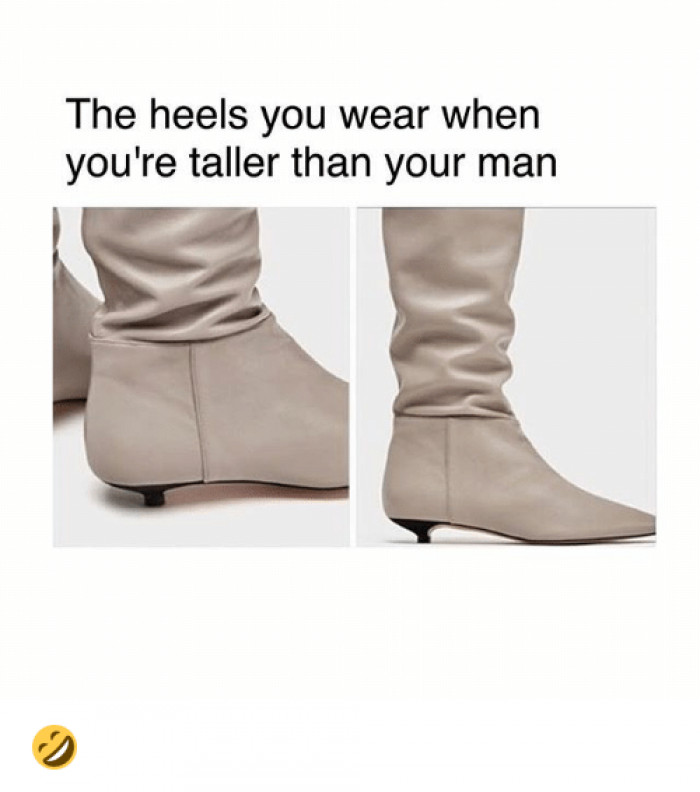 This is a pretty big height difference. They made it work for YEARS, thought! 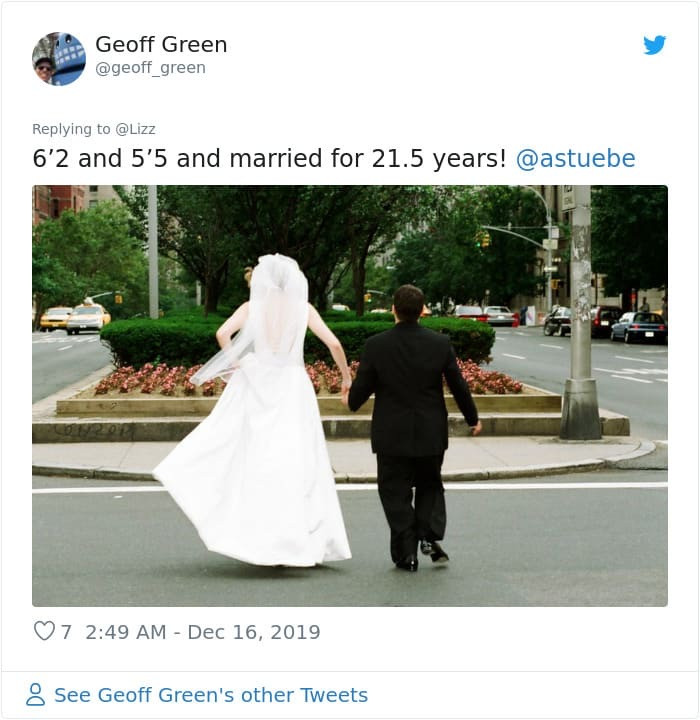 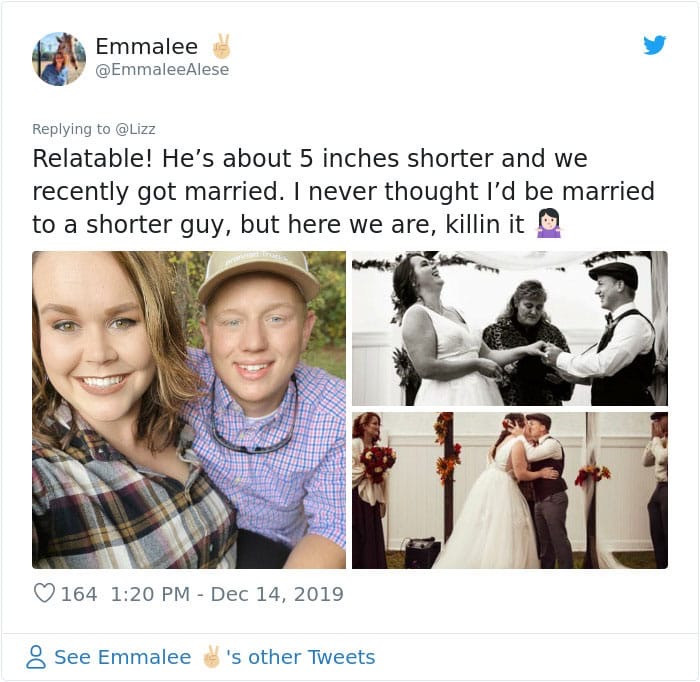 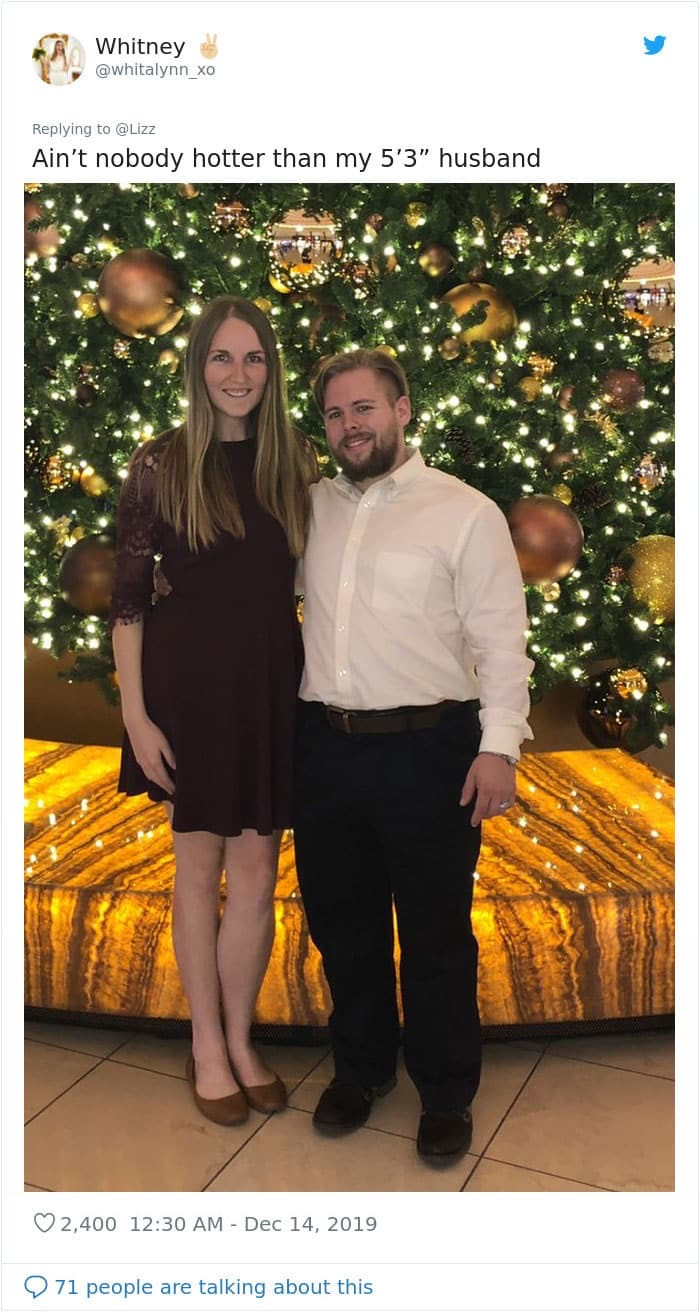 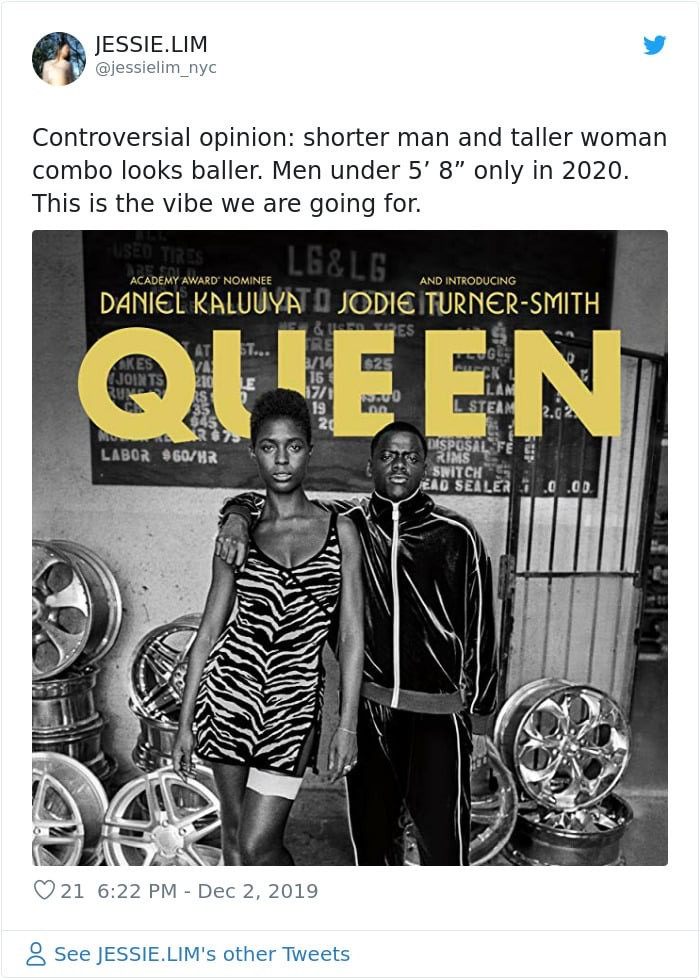 This woman dropped her height requirement and found a great guy! 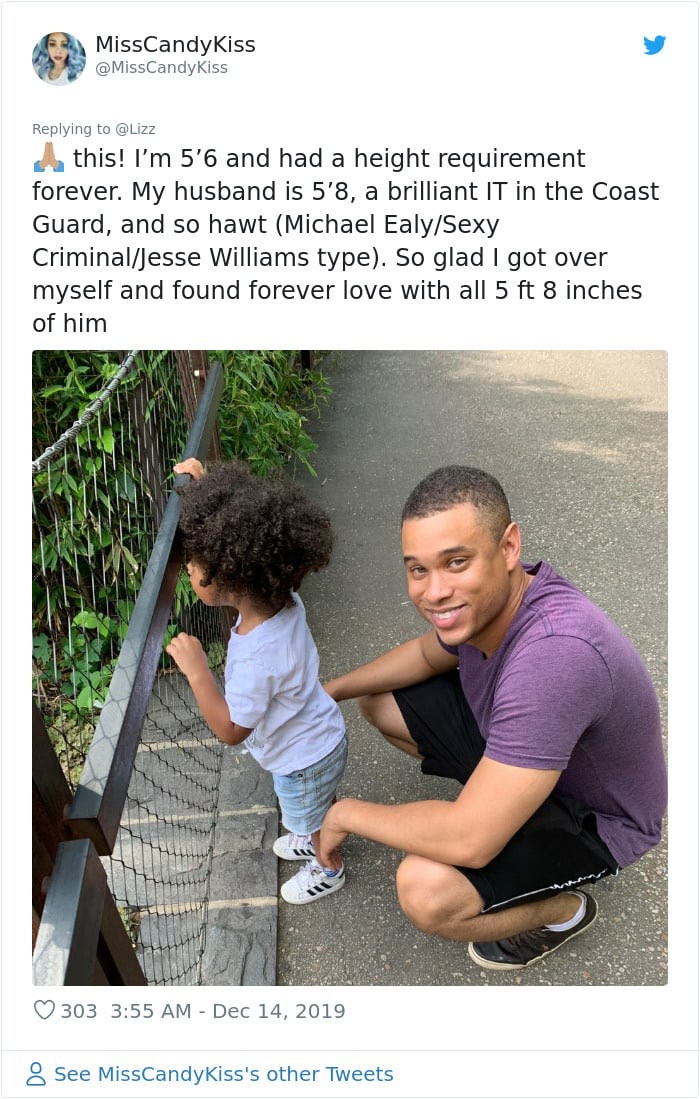 Both tall, but she's taller. 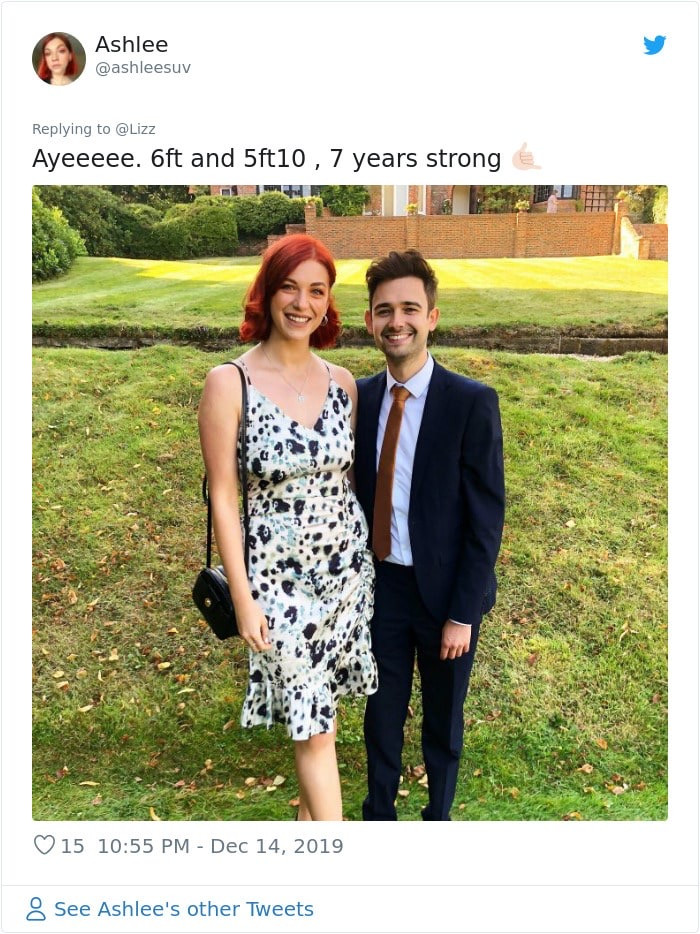 This girl tweeted a pic of her parents 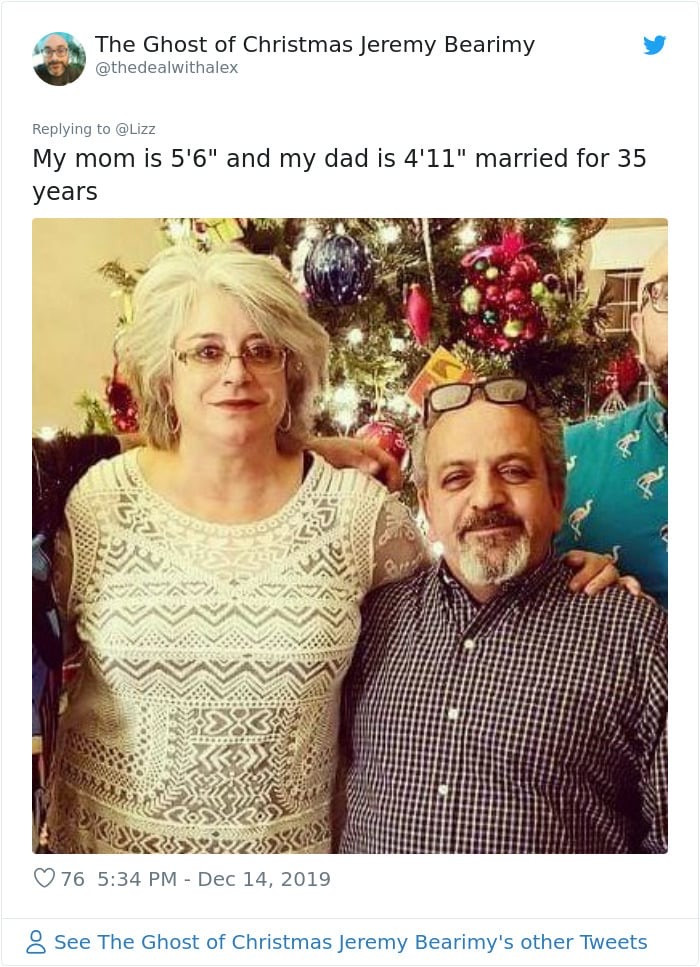 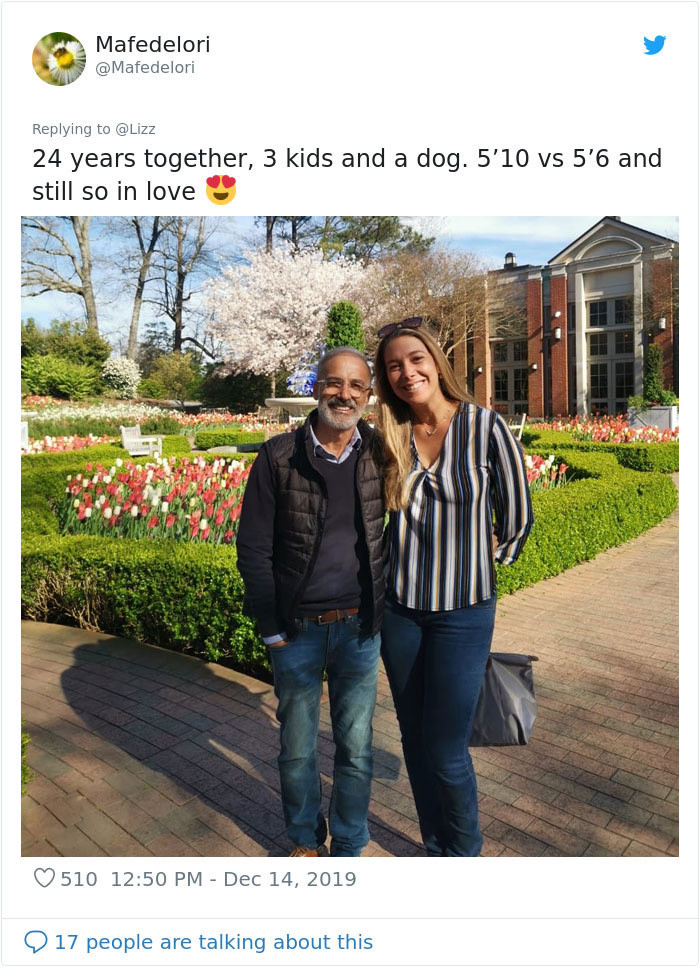 Liz shares something her hubby once did and it's kinda great! 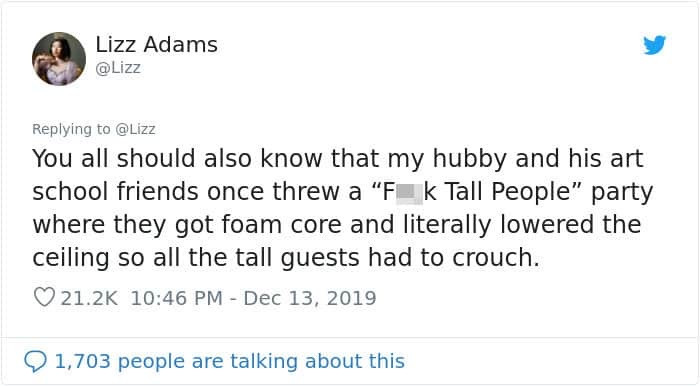 #NotALLTallMen... of course there was one. 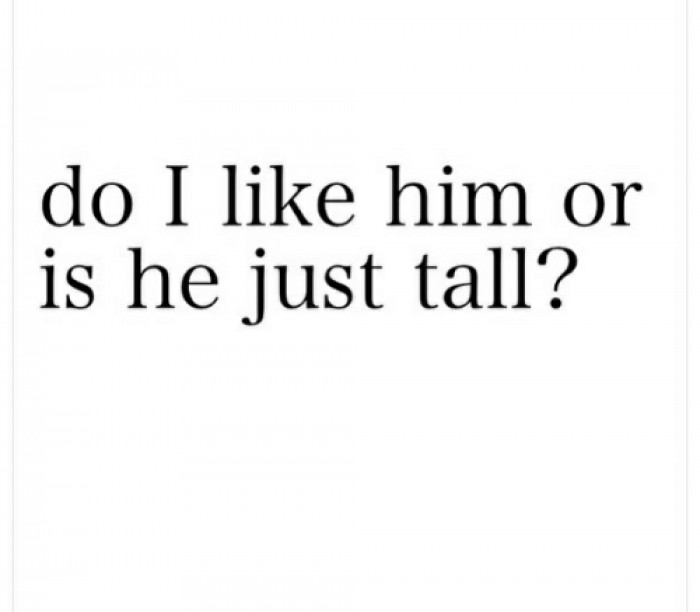