Most teenage girls are interested in experimenting with beauty products, it's no secret. The massive beauty industry is a constantly changing market filled with new must-try products for skin and hair. The truth is that it is all very alluring for young women trying to figure out exactly what is right for them!

Australian teenager, Tylah Durie was no exception. Living in Victoria she frequently found herself experimenting with new beauty products, including a wide variety of options designed to dye her eyebrows. At 16 years-old, the sky was the limit for her. 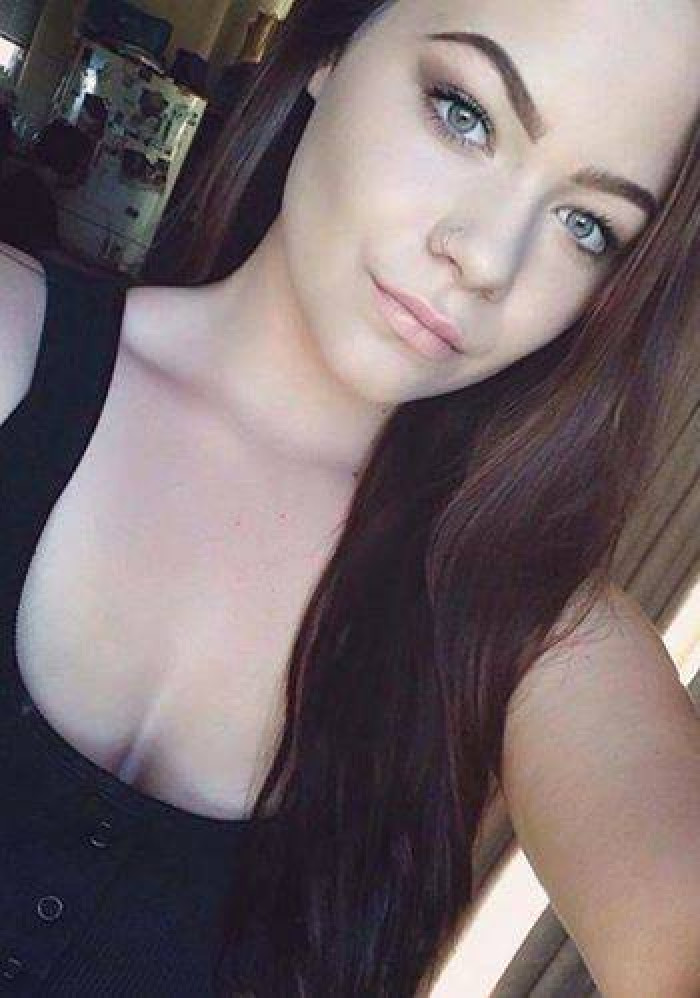 Using dye on her eyebrows was certainly not a new and mysterious concept for the 16-year-old but she definitely had her eyes on a particular product she wanted to try. She had no clue just how detrimental to her health and well-being this product would be for her.

It was only a mere thirty minutes after applying the product, "1000 Hour’s Eyelash and Brow Dye kit," that the aspiring beauty student began to experience unpleasant symptoms. It started with burning and itching on her eyebrows, and it only got worse.

Tylah recounted what it was like to wake up experiencing the horrifying reaction:

I woke up almost blind because of the reaction, my eyes had blown up like huge balloons, I was crying and screaming. 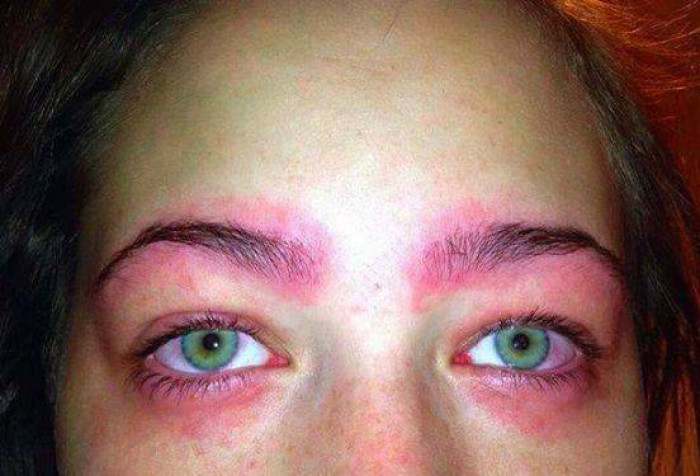 Continuing on, Tylah further described what the pain was like:

It was like having beach sand thrown in your eyeballs and not being able to get it out, then a stinging like razor blades on my eyebrows.

I think anyone can read that description and imagine the excruciating pain Tylah had to be in, and wouldn't wish that on anyone!

So what the heck was going on?

Tylah was allergic to an ingredient in the product called paraphenylenediamine (PPD) and she had no clue she was allergic. Additionally, the ingredient was not present in any of the other eyebrow dye kits she'd used in the past.

Go to the next page to see the extent of Tylah's injuries. 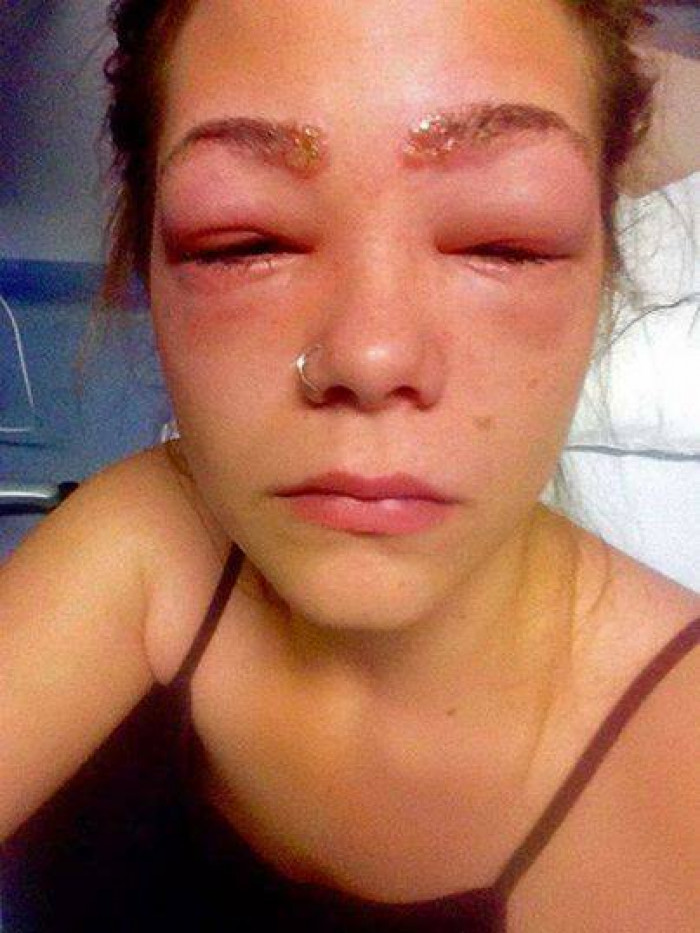 Tylah's condition was horrifying to experience... so what went wrong?

When 16-year-old Tylah Durie tried to dye her eyebrows it may have been a day like any other, to begin with but she had no clue that it would be a near-fatal mistake and come dangerously close to costing her very eyesight.

As her condition worsened, the swelling and pain consumed her but one thing was for certain: all of this could have been avoided with a simple "patch test."

A patch test is a strong recommendation in the beauty products community to take a portion of the product you're wanting to use and smear it on a safe place, like the top of your hand, and then wait an hour to see if you have a reaction. It is often recommended with face makeup and hair dye because a reaction on a small area like the top of your hand will be nothing compared to a dangerous reaction all over your face or the entirety of your scalp. All too often people take a huge gamble when they assume the new-to-them products won't be an issue when something as simple as one new ingredient can have dire consequences, as was the case with Tylah being allergic to a single ingredient.

The next page shows a closer view at her eyes and the trauma that they went through. 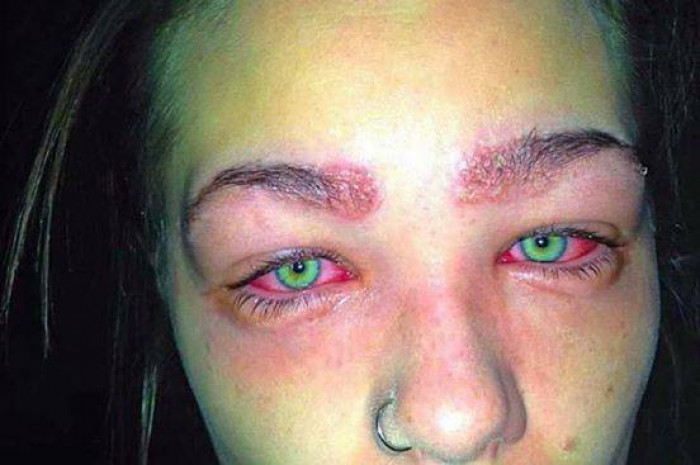 The allergy left serious chemical burns on the teenager's face and eyeballs, and her doctors issued stern warnings that attempting to use this product ever again could kill her.

Tylah, in her own words:

I was hospitalized and was terrified, doctors said I had a very unusual but severe allergic reaction and could have gone permanently blind.

She was prescribed antihistamines but that didn't completely halt some of the horrifying reactions, including painful blisters forming in her brows and her eyelashes falling out.

Reactions can be as small as redness around the edges of your face to itching of the eyes, all the way to chemical burns, blisters and your whole scalp feeling like it’s melting off. Some people can even suffer anaphylactic shock.

Tylah wanted nothing more than to simply darken her eyebrows and now that she is recovering, she's turning her horrifying experience into a lesson for others. She just wants to warn people what the consequences can be when one doesn't do the simple patch test. It may be rare but it's certainly not worth risking.

The path of recovery. 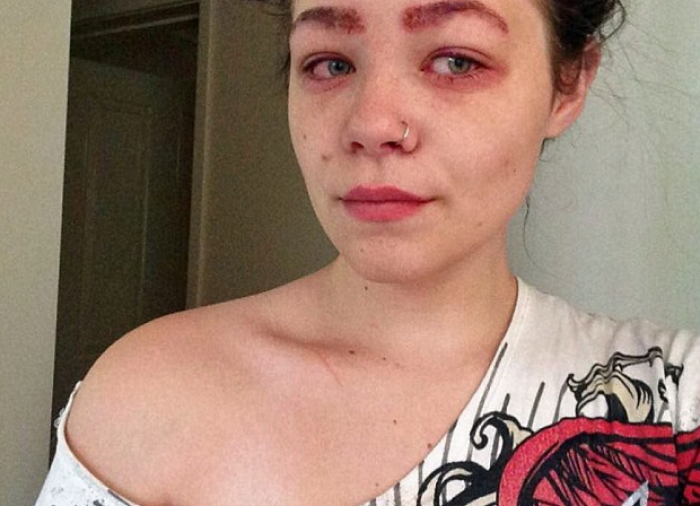 No one really does the patch test in my family, so I thought I would be okay and hadn’t suffered any reactions when dying my hair in the past, but those dyes didn’t have PPD in them.

I’m on a lot of medications to heal this and would never wish this pain on anyone, so please do a patch test.

I was really scared by what happened… once you get one reaction from PPD it gets worse and worse each time. If it happens again it could either kill me or leave me permanently blinded.

It's a terrifying thought, especially knowing that it could happen to literally anyone and you would have NO clue. Your only choices in preventing tragedies like this from happening to you are to do a patch test... or have a professional help you along the way. 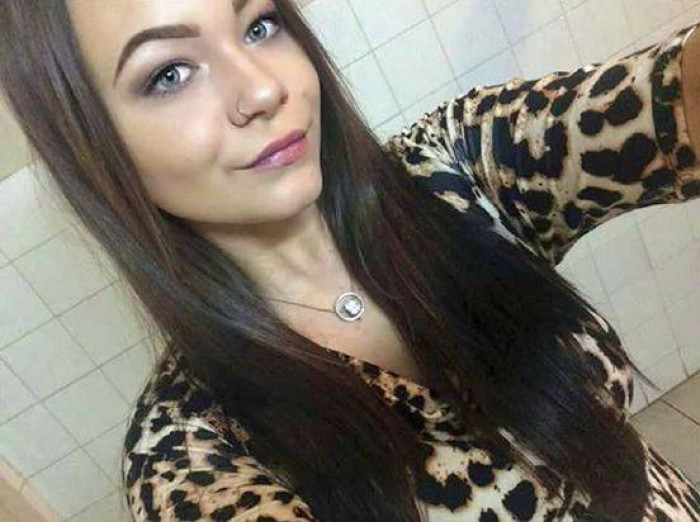