15 Vending Machines That Hilariously Suck at Their Job

Have you ever had that moment where you just wanted a snack so bad that after grappling over time and money and whether or not it was worth it, you were finally willing to pay an outrageous price at a vending machine and the stupid snack got stuck? Were you able to resist the urge to kick the thing? Some people say that it doesn't work to kick or shake the machine but I beg to differ. When you want a snack enough to pay that much money for it, you want that snack bad enough to fight a machine for it.

Apparently, not everyone is as volatile over snacks as me though because there's a whole bunch of pictures of people who laughed and gave up instead of tackling a giant machine. This entire list is hysterical and almost hard to believe.

Just kidding, I'm glad he's admitting how useless and horrible he is! 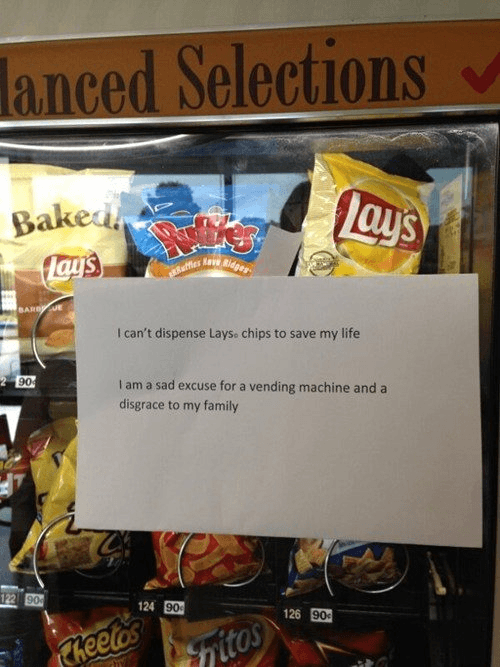 2. I wish someone would just give up on this one.

This is utter chaos. 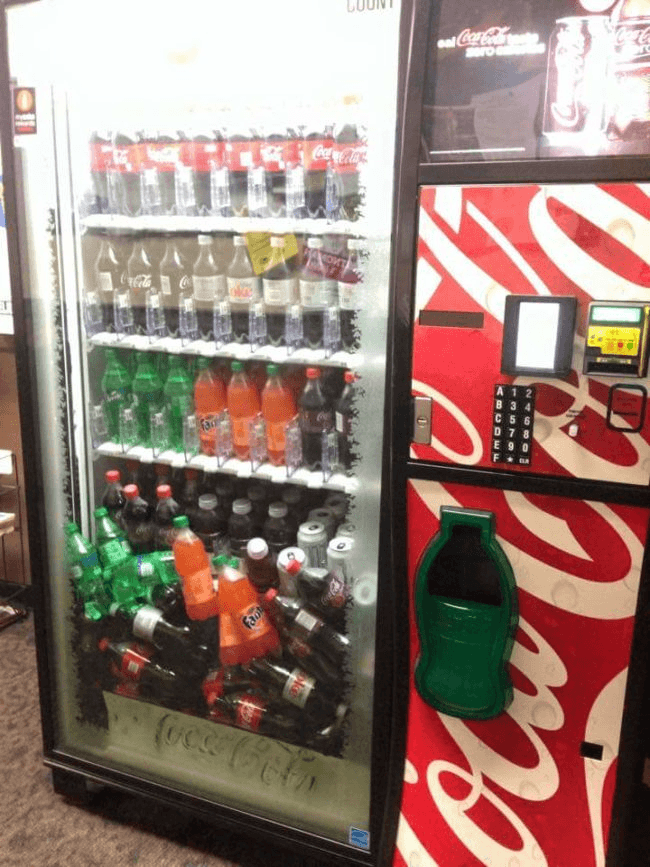 I mean, I'm kind of impressed at how many people wasted their money for a bag of chips that was never coming. 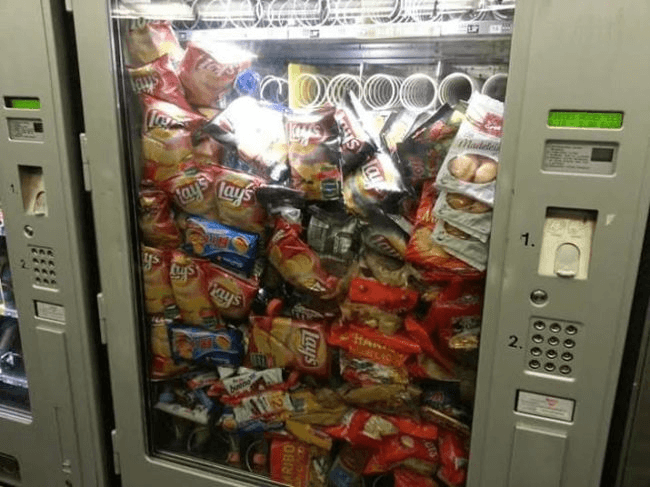 4. At least someone is telling it straight.

But this vending machine is terrible at it's job. 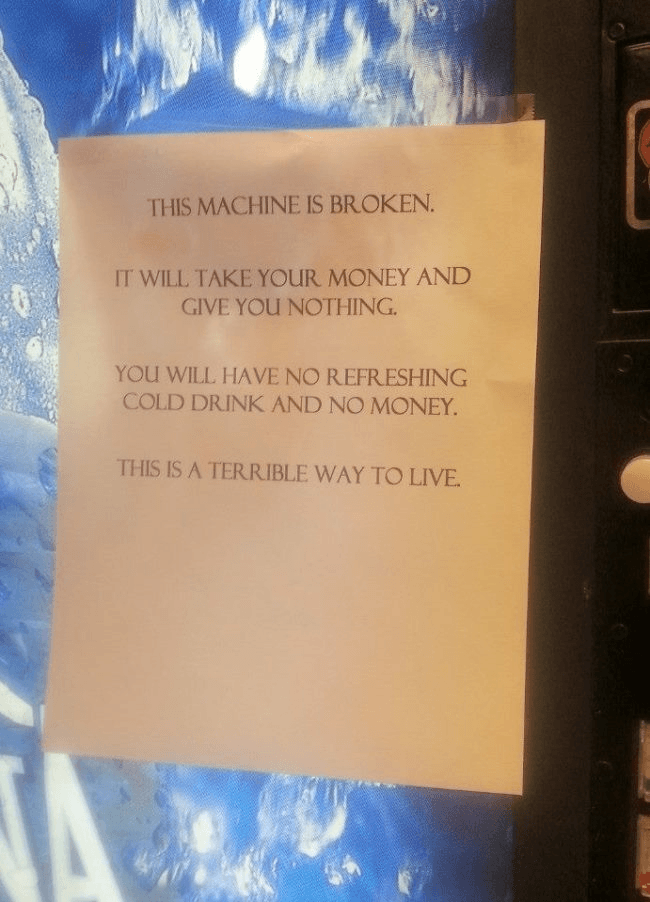 5. This is very optimistic.

Although I'm not sure who we are donating to... is it the owner of the vending machine? If so, that's pretty clever. 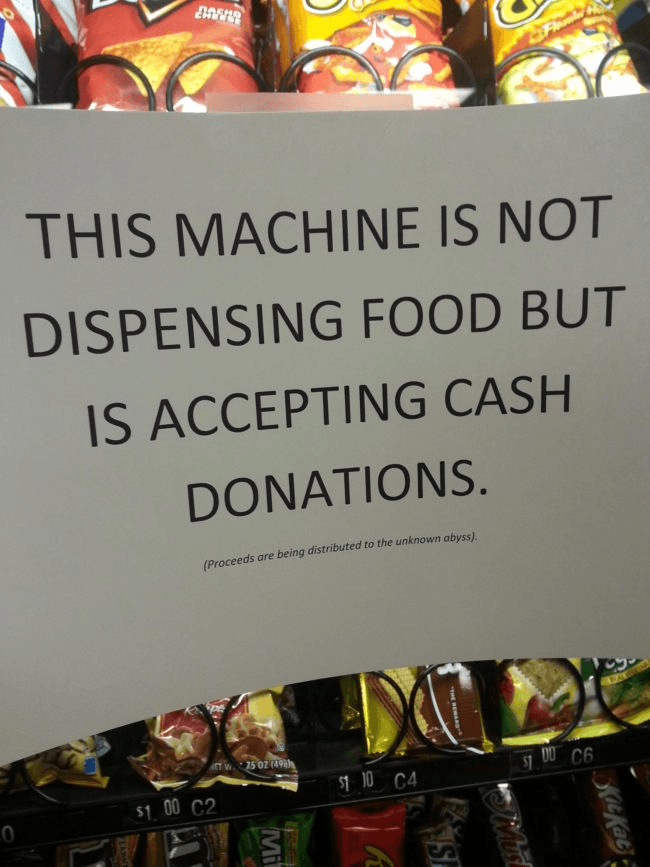 6. Justice will be served

For the amount of effort he put in, he deserves his refund. 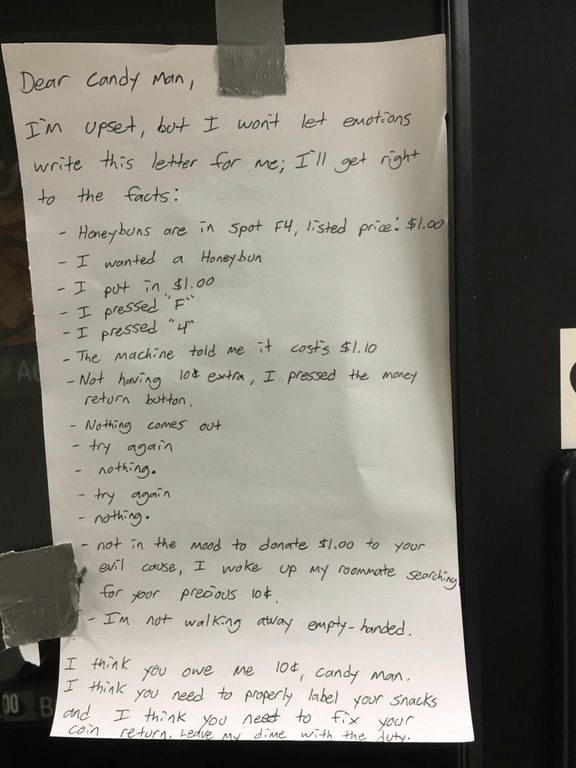 ...don't sugar coat it or anything. 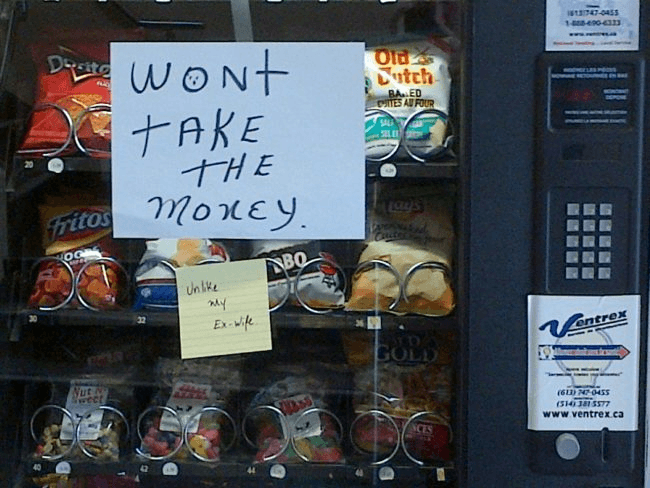 I feel his heartache but I'm glad someone took the opportunity to lift him up. 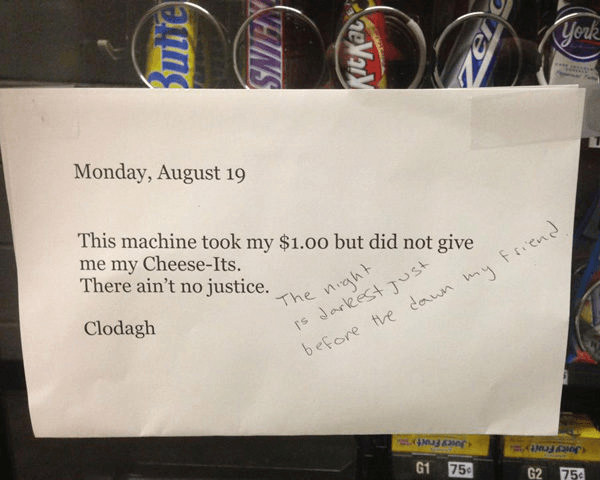 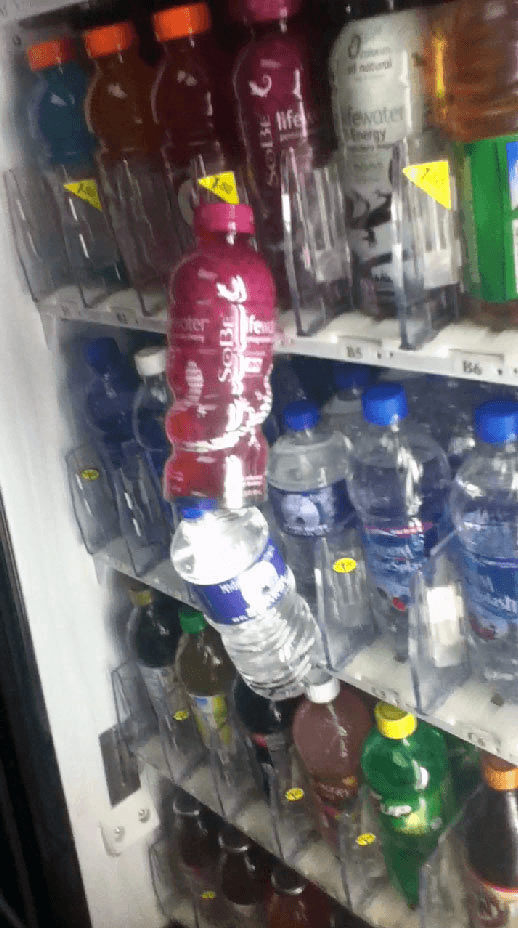 Gamble on your snacks with this vending machine. 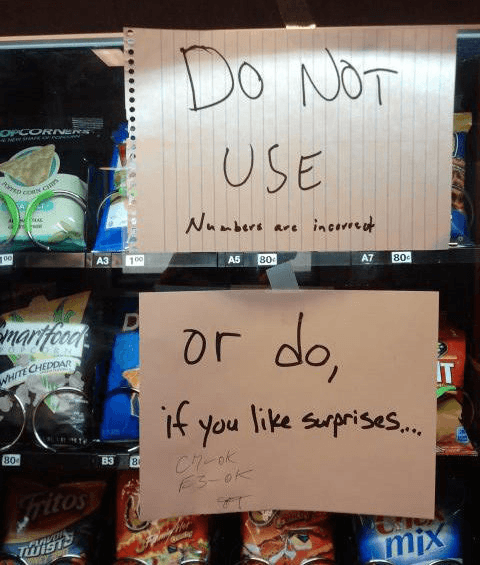 I said kit-kat not kitty cat. Actually on second thought, this is way better. 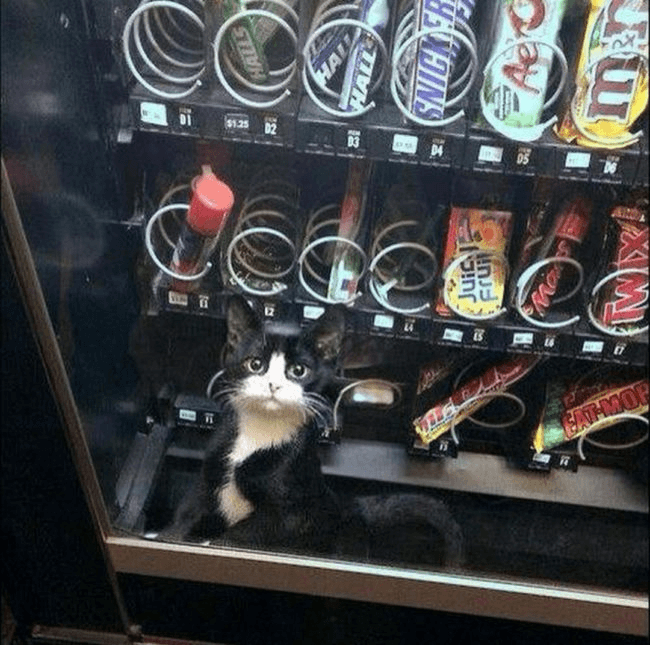 I mean other than these few flaws it's basically fine, right? 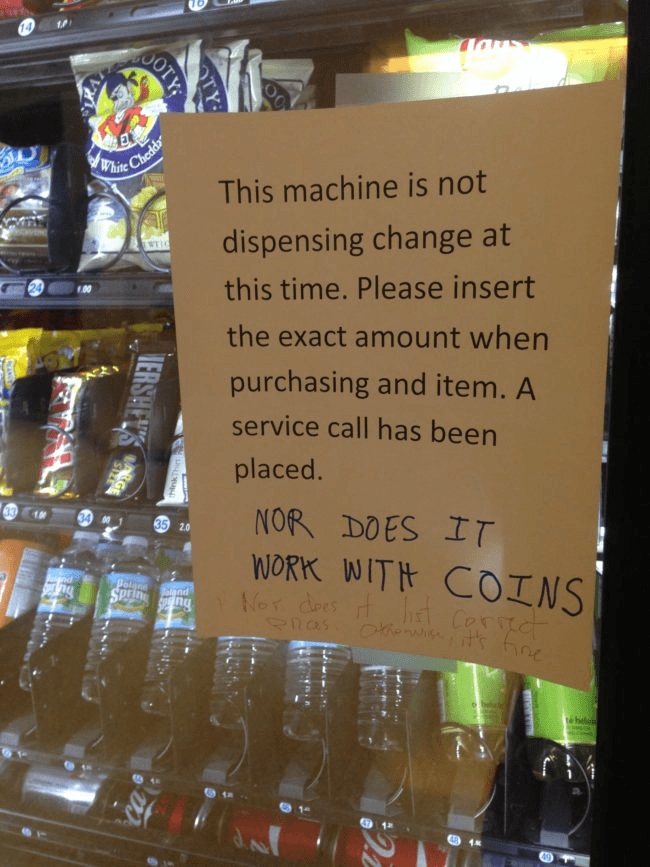 Never come between a desperate man and his cheetos. 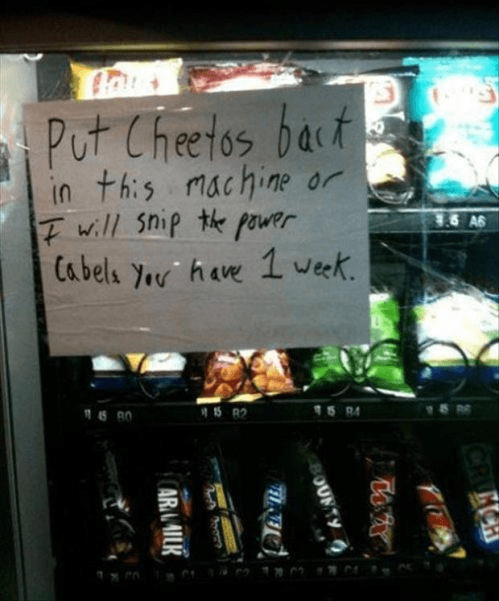 That's a visual that makes me anything but thirsty. 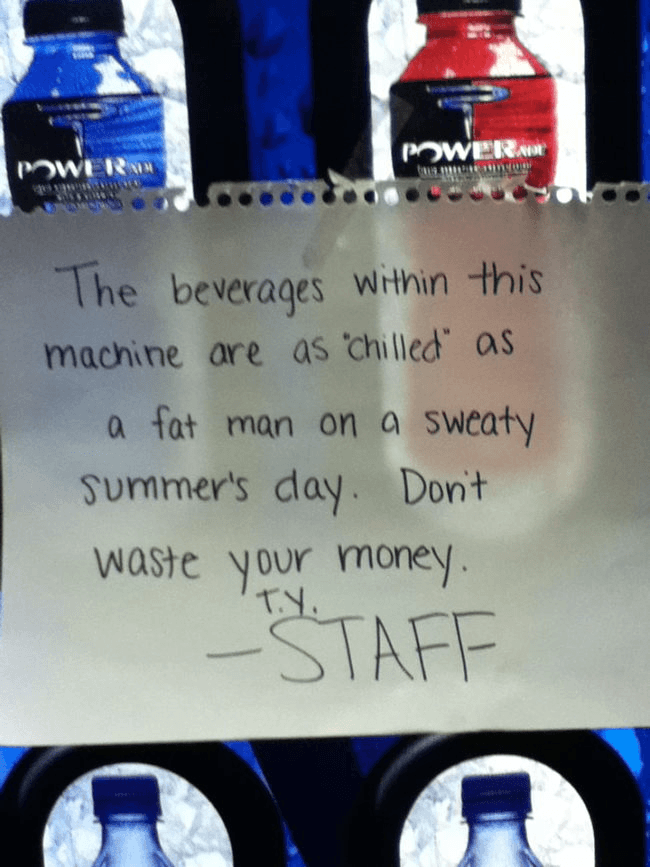 15. I learned something new from this vending machine: 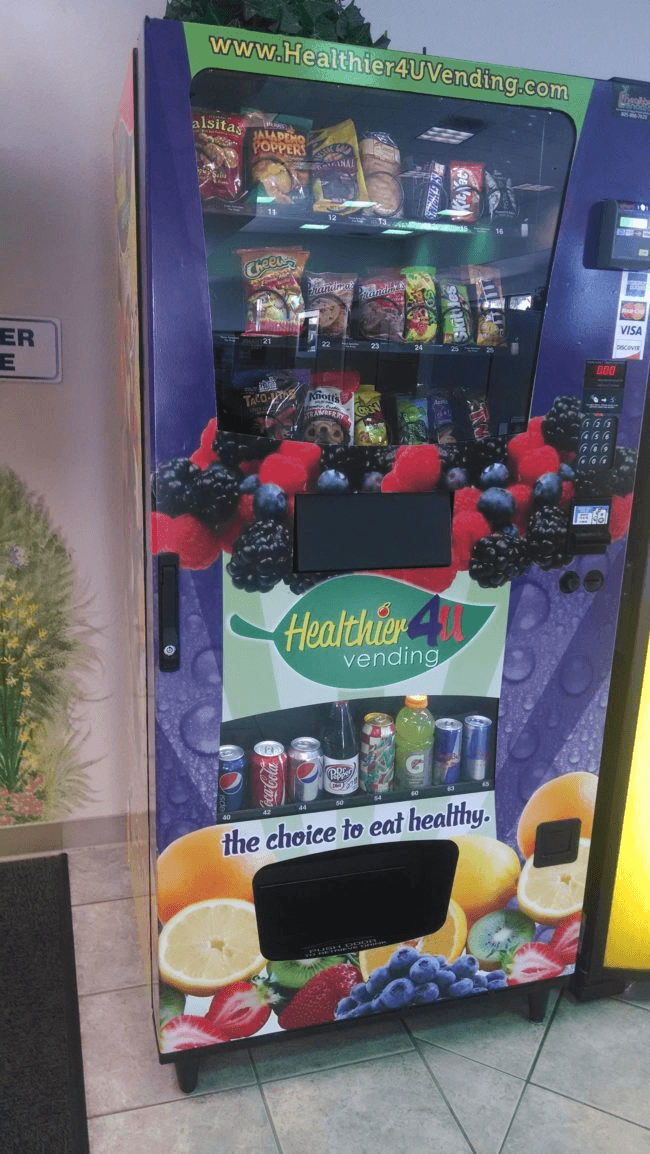