Adam Savage, former MythBusters co-host, has lately received some backlash from a small minority of his fans on Twitter after he voiced his opinion on people who refuse to wear masks. Adam is known for speaking out on conspiracy theories and he's basically straight savage when it comes to defending and protecting science as well as the things he believes in. He previously Tweeted about anti-vaxers, and some of his fans also didn't receive it well.

After a couple of people replied to his Tweet saying that they will unfollow him because of what he said, Adam decided to reply to some of them and shut them down one by one. 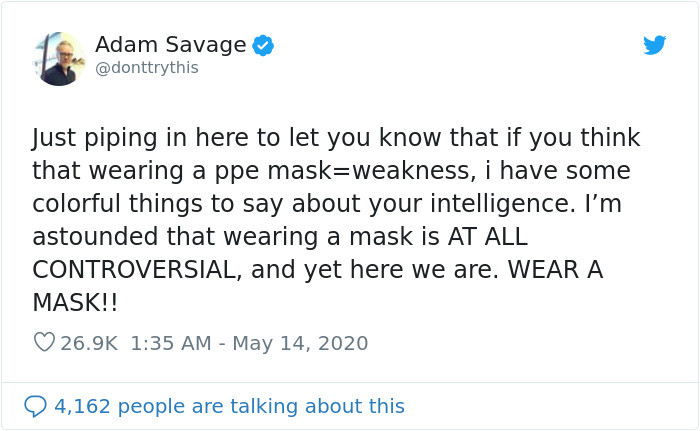 Some of Adam's followers were definitely not pleased with what he said... 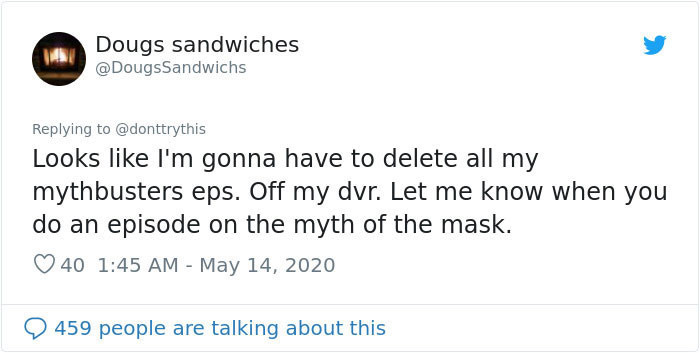 That's when Savage started shutting them down one by one 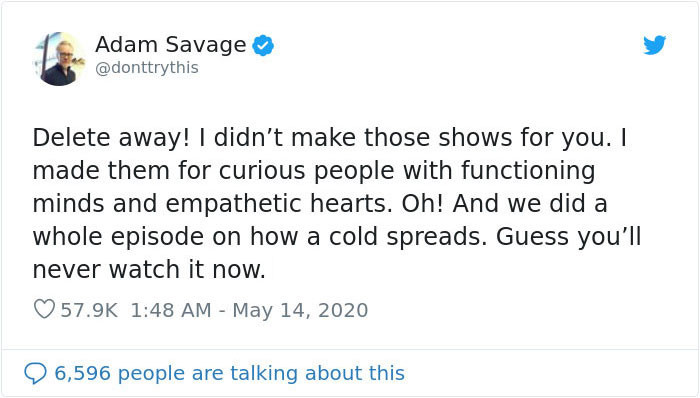 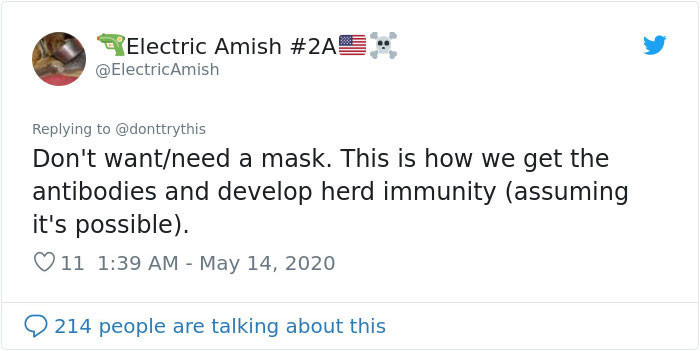 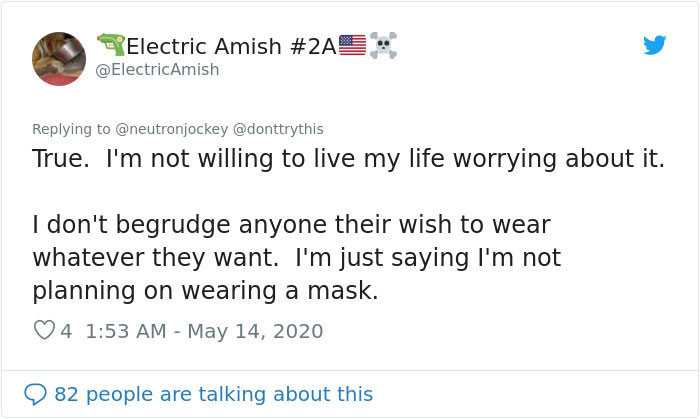 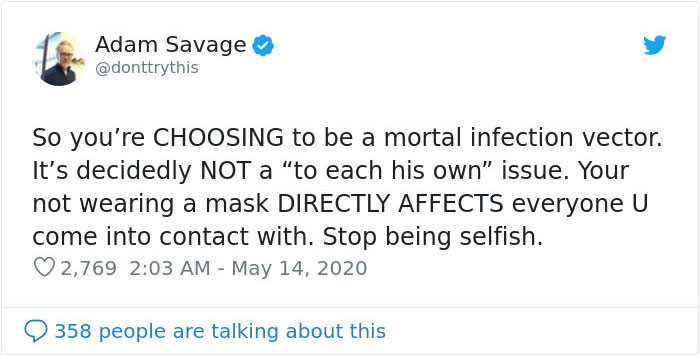 Savage thoroughly explained why some people end up falling for these conspiracy theories.

“Life is unending chaos. We are insignificant, we are born, briefly shine, and then we die. There’s plenty of suffering in between. Maybe, when they’re confronted with that chaos, for some people the idea of a coordinated plan is comforting, even if the plan is against them. At least someone is in charge,” he said.

“Real evil is way more banal, I imagine, than most people think it is. The true horror is preventable, incremental bureaucratic violence perpetrated on the weakest and most marginalized in society. Little people, each afraid for their jobs. Not some nefarious hidden genius with a big plan. I have no idea if I’m right but the odds are with me.”

Savage continued: “Trying to get hundreds or thousands of human beings to keep quiet forever about something huge in a perfectly coordinated fashion is about as realistic as making a skyscraper from jello. Humans are just too squishy and unpredictable.”

Savage then added that wearing a mask is the best way to fight misleading information about coronavirus:

“If there was broken glass all over the floor would you refuse to wear shoes on principle?”

Adam has repeatedly confronted conspiracy theorist in the past: 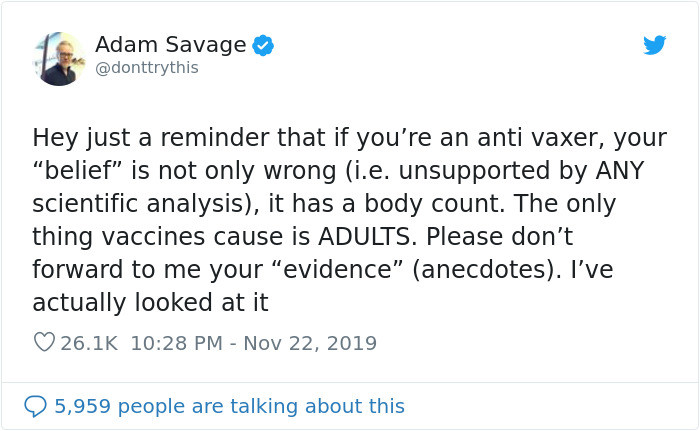 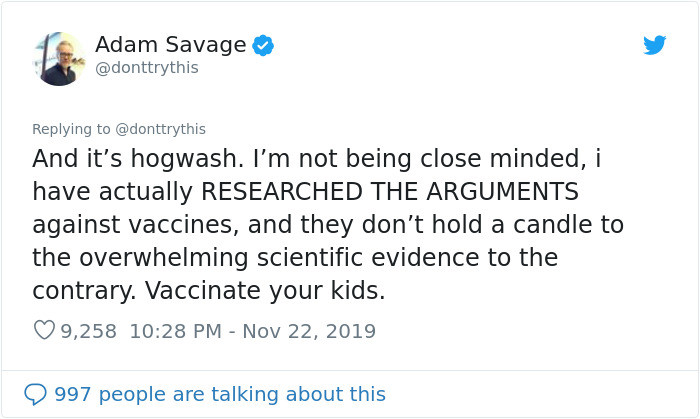 This isn't Adam's first rodeo, he's been fighting scientific misinformation for quite a long time. He previously called out anti-vaxxers in November 2019 and accused them that they are leading people to die way earlier than they should. Some of his fans were also not that happy about what he said. 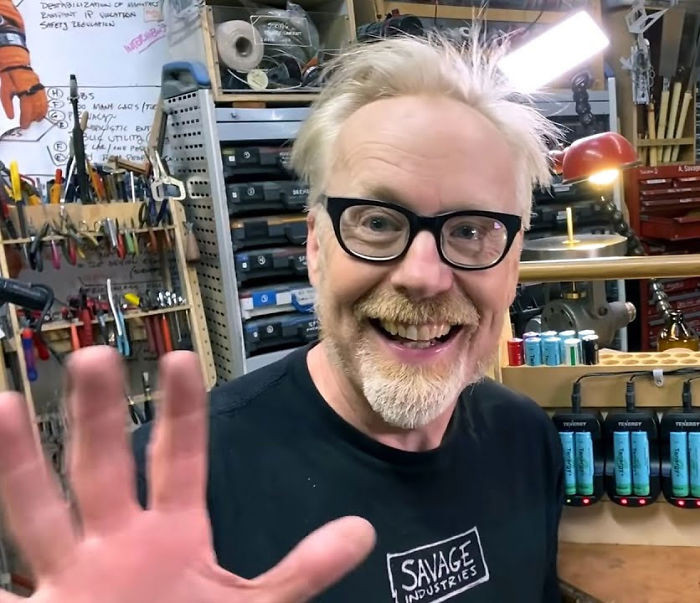 In the beginning, many politicians told people not to wear masks because health professionals were running out of supplies and they were afraid that they wouldn't have enough of them. However, after many developments, most countries changed their tune and made wearing masks mandatory to prevent the virus from spreading further.

Many Asian countries were able to ‘flatten the curve’ by using masks in public, according to a statement Chris Kenyon from The Institute of Tropical Medicine in Antwerp gave to BBC Future.

Ben Cowling, the head of epidemiology and biostatistics at the University of Hong Kong, told the BBC that “face masks could help to reduce transmission in the community particularly if used in public transport and crowded areas.” Cowling and his colleagues found that the virus is capable of escaping through the breath and coughs of infected people, so even by wearing a standard surgical face mask, it would be enough to reduce the amount of virus escaping their mouths.

Here's how people felt about the interactions above: