Traveling with a newborn baby is already somewhat difficult. It's even more difficult if you get on your plane to realize that someone is in your seat.

Parents all have the same struggles and sympathize with each other. Sometimes, you have to stand up for yourself and your babies though.

This father and mother feel super bad after telling another mother to move out of their seat, but the story has more context than that. They decided to ask Reddit for advice.

You might ask yourself, why did they kick the mother out of the seat? Well, it wasn't as terrible as it sounds.

This mother and father paid for the seat and she was sitting in it. I mean, what would you do if this was your situation?

These parents want to know if they are assholes for making the mother get out of their seat. Reddit had a lot to say about this and a lot of people were actually on their side.

Let's dive into the story and see what exactly happened so we can determine if they actually are the asshole or if they were in the right. We'll also see what Reddit commenters have to say about the situation, what they would do, and if they're the asshole or not. 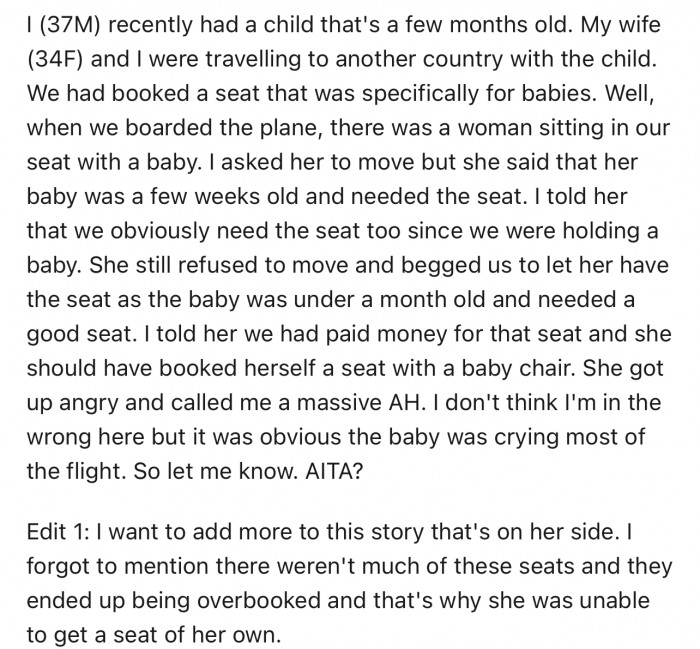 The first NTA comment. Most people agree with them that they paid for the seat so obviously they get the right to it.

She definitely felt entitled to her seat. Ridiculous.

Someone who went through a similar situation. I wonder how many times things like this happen when traveling on airplanes.

Exactly, but it didn't work.

"You paid for the seat, she didn't." Said it perfectly.

Another NTA commenter and I mean they have a point. 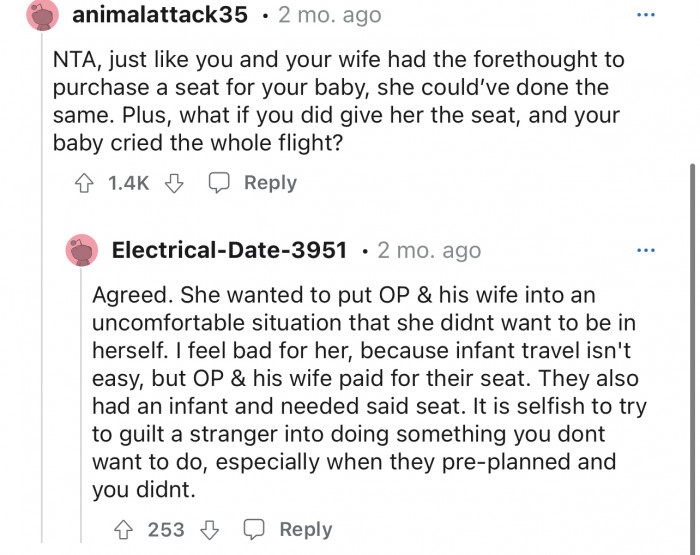 It's ridiculous for her to demand that because her baby is younger, that they deserve the seat, but newborns typically are easier on flights than older babies. 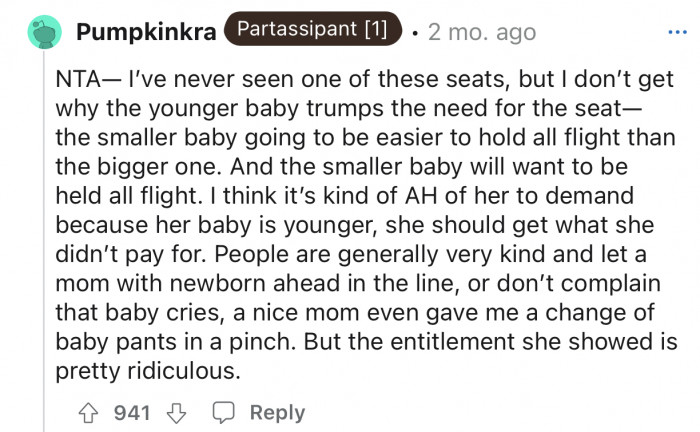 People are coming in hot with information and details. 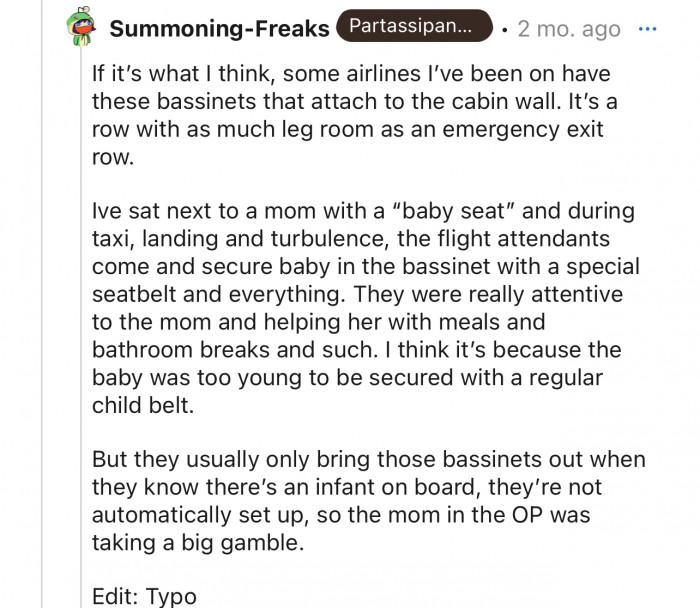 "Good for you" sounds about right.

Wait, shoe got mad at the flight attendant too? 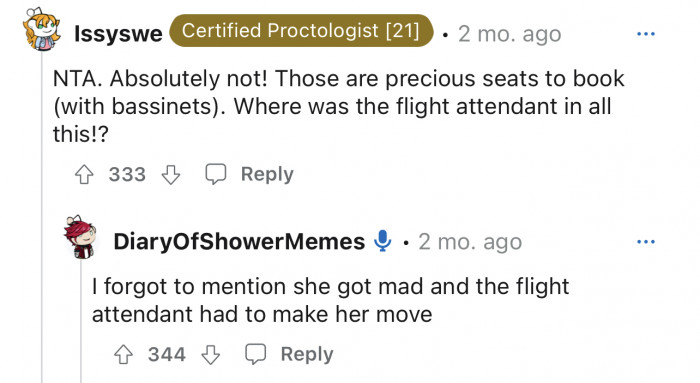 Everyone is saying that the OP is NTA and had the right to use the seat. 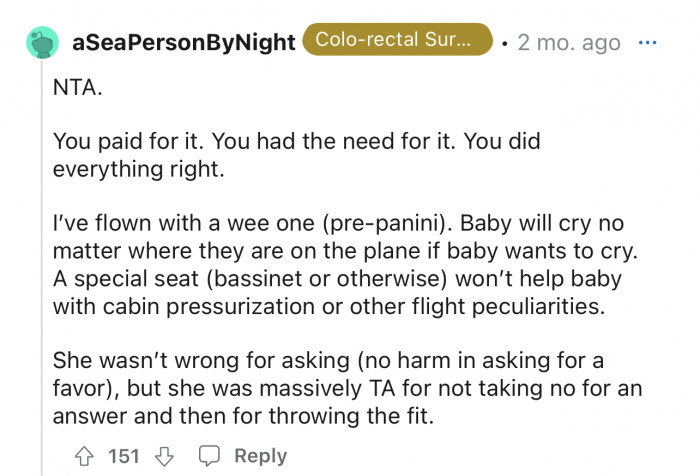 More perspectives on the situation. 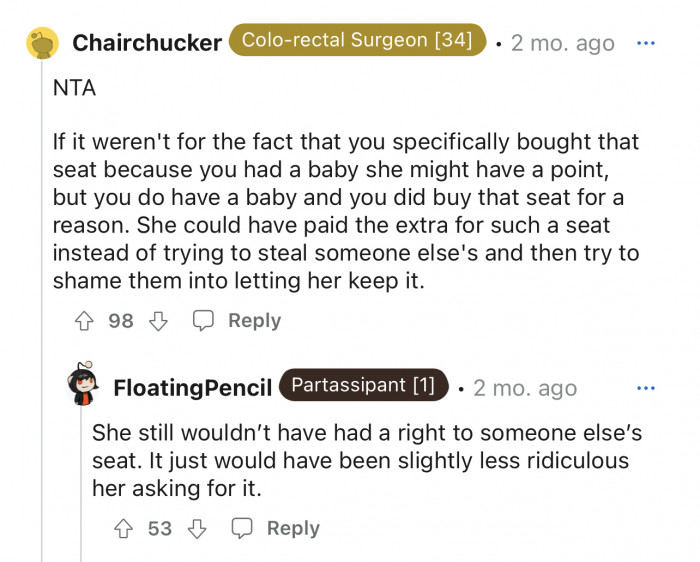 Why do people think thy can just take seats? 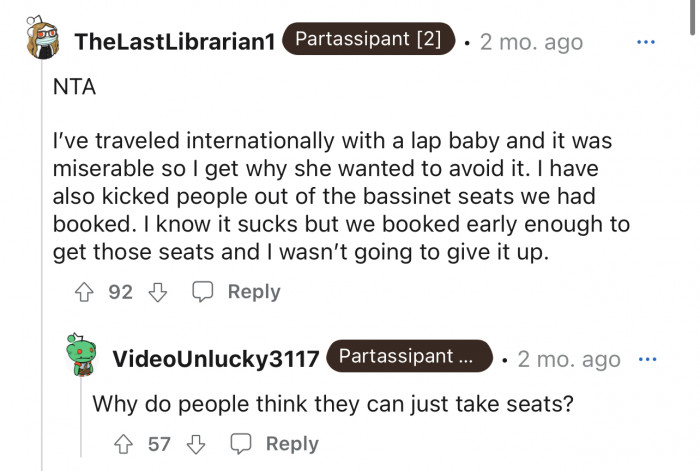 Basically everyone is saying that she's ridiculous for thinking she was entitled to OP's seat. 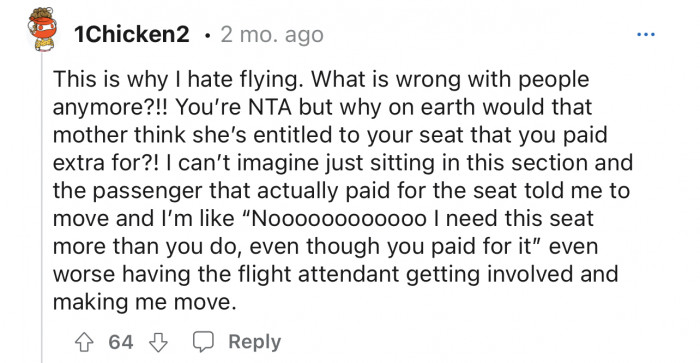 Yep, because it was definitely emotional manipulation.

Yesss, exactly, what they said.

I mean they did pay for the seat. This person says that it's rude to ask to switch seats in general. Just sit where you're supposed to. 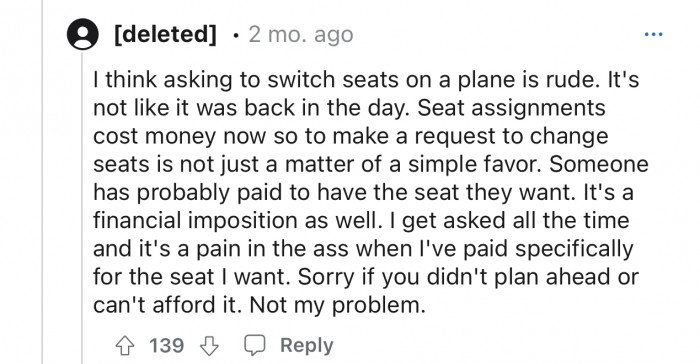 Very presumptuous for her to just sit there knowing it wasn't her seat. 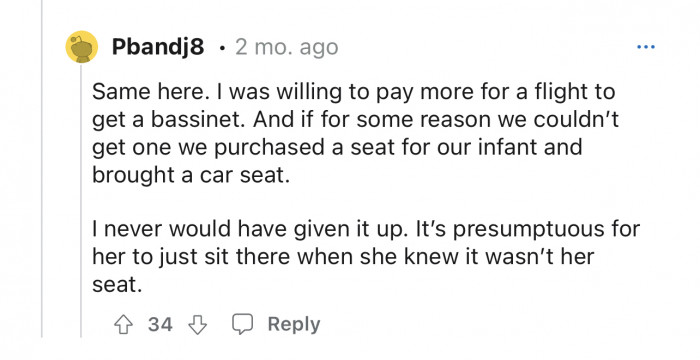 One commenter says they're NTA but OP replies saying this. What do you think? 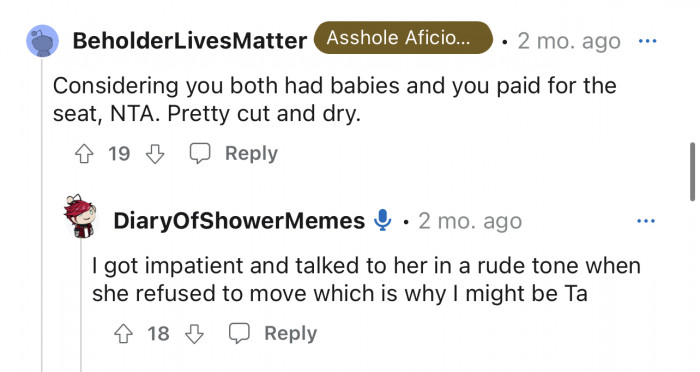 This situation actually has people all saying he's not the asshole. Most people are agreeing with this person and say that they were in the right.

I mean, this couple did pay for the seats and the woman did not. It was definitely unfair that she made it seem like her baby and herself were more important than the couple.

How do you feel about this situation? Would you have done the same thing or would you have taken your seats back?