College education in the US is costly, and although it provides college graduates with some advantages over their competition, it also sets them back a bit. The burden of huge debt is too much for some of them to bear, and they have trouble paying it off.

American Twitter user Wee-Yum recently posted a screenshot of their student debt: $82,649.35. "This is my student loan amount," the caption wrote. "I don't stress because it ain't ever getting paid off." To find consolation, Wee-Yum invited others to share their student debts as well.

Because this is a hot public topic in the US, it went viral quickly. It got more than 93.4K likes and received plenty of replies. The amounts are staggering. The saddest part is that most of the people who shared them seem pretty hopeless and don't think they will ever repay them. 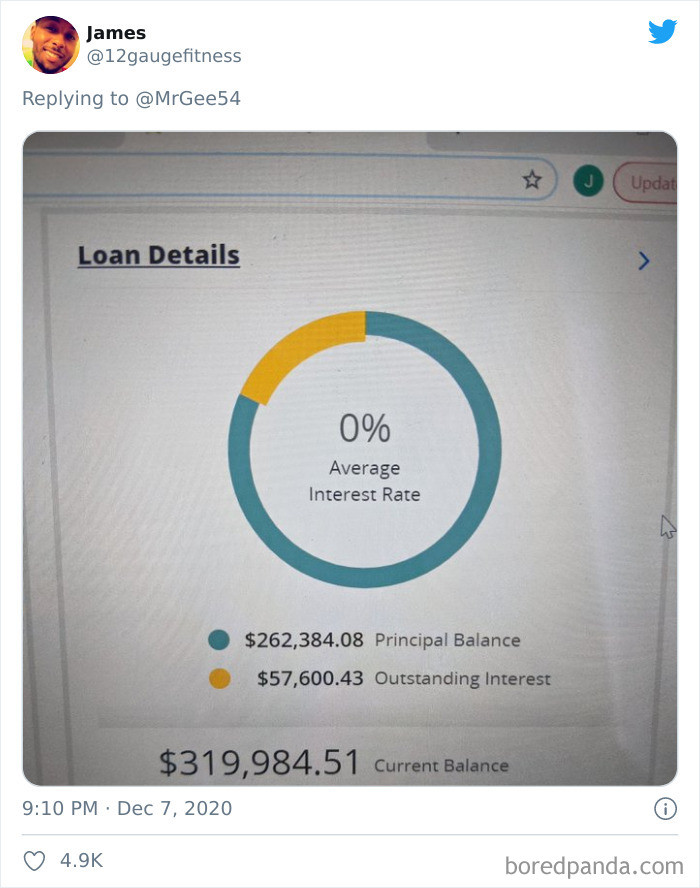 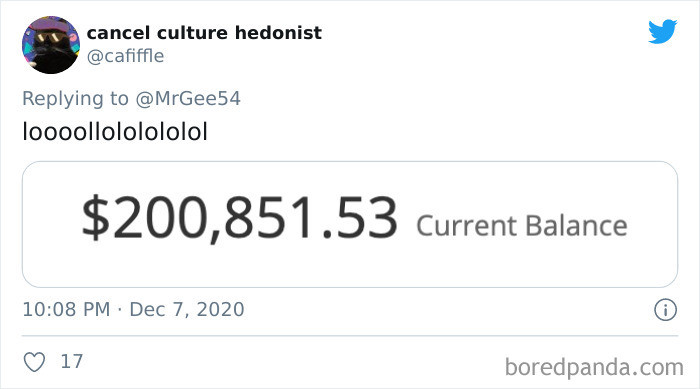 The total amount of unpaid student credits reached an all-time high in 2020 – close to $1.6 trillion. The experts predict it will reach $2 trillion by 2024.

About 43% of American college graduates took some form of loan to pay for their studies. But today, the situation is even worse. Nearly 54% of students need to take a loan to cover their educational expenses. 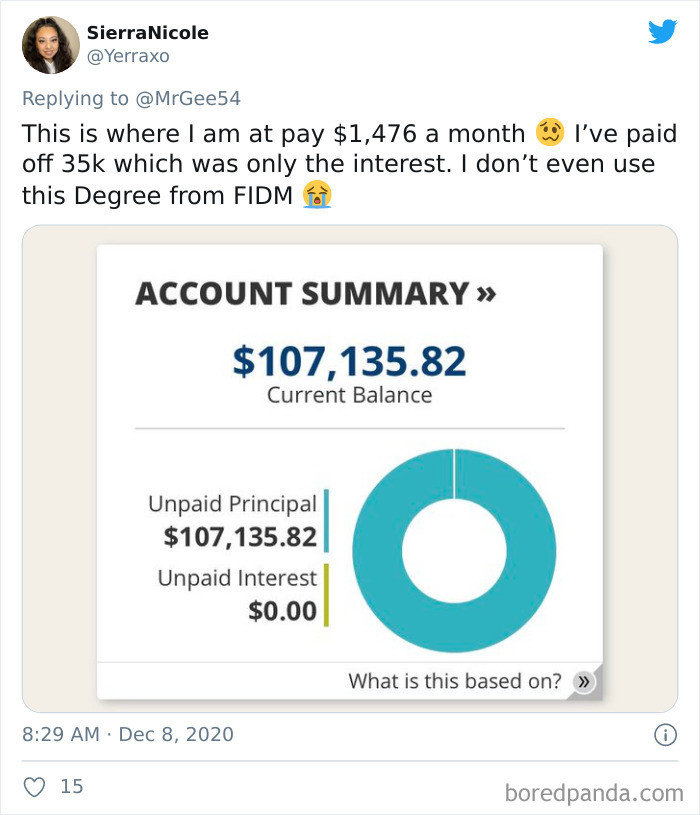 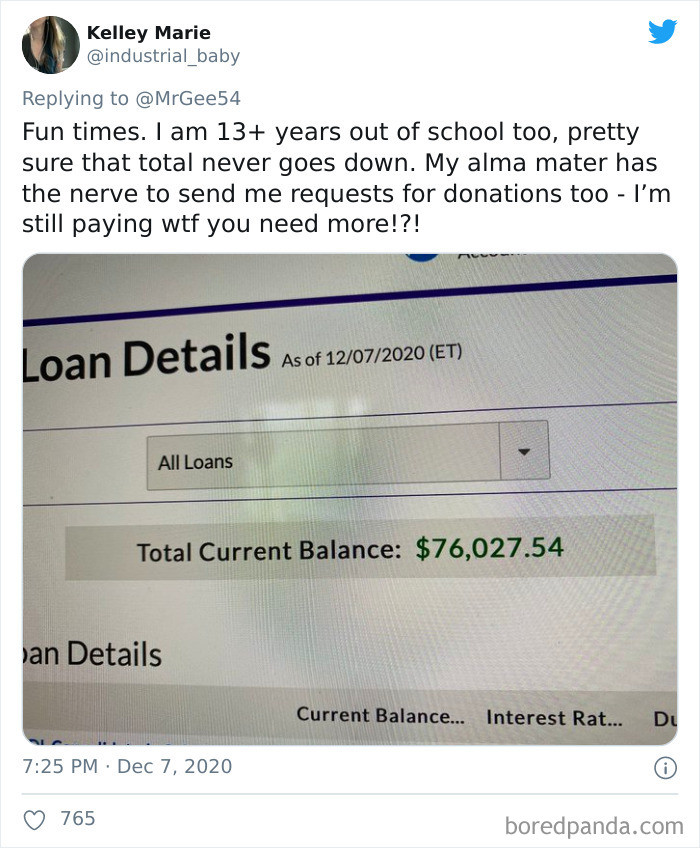 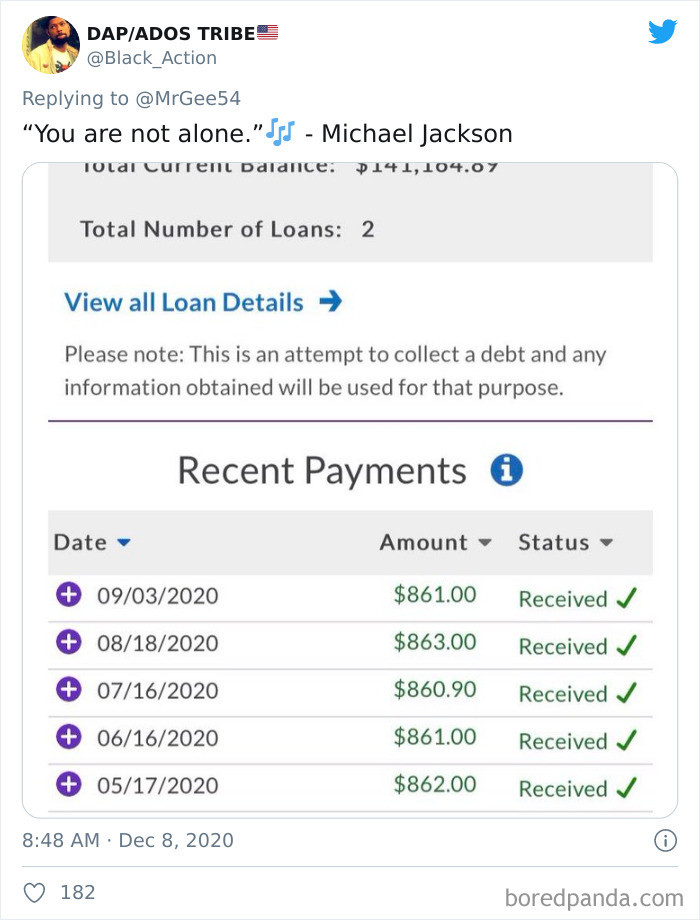 Kelley Marie is one of the people who contributed to this thread. She was already a mom when she took her student loan. "I knew I needed to do better for myself, for [my kids'] sake as well as mine. I simply could not afford college on my own, so it was a risk that I simply decided to take," she said.

Her total debt at completion was around $65k. "I have both federal loans and private loans," she said. "When I first graduated the payment was undoable, something like $750+, so I deferred my federal loans and ended up on interest on for my private ones. It piled up for the first several years (my first job out of school only paid about $30k), and at that time, I was a single mom to two kids."

The curriculum Kelley wanted was only available at a private university, and there wasn't another one in the region where she lived. "I want to say that maybe I would have chosen another field, but that really sucks to be stuck in that situation. I don't know how I could have worked more (I freelanced during college) between full-time classes and being a mother. But that being said, my older girls are now 18 and 16, and I am pushing them to take out as few loans as possible. Me drowning in my own loans kept me from saving for their education. But I can help them navigate the system in a way my parents did not. Searching for jobs that offer grants, and comparing schools." 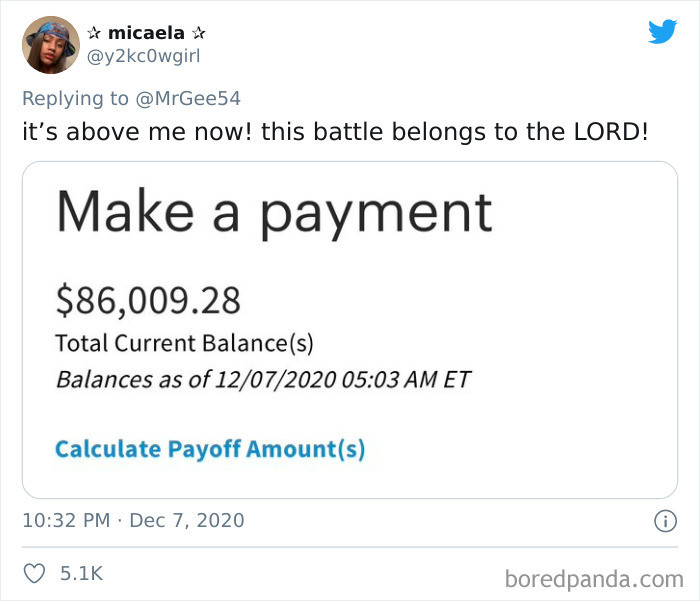 For Scott Quenette, another contributor to the thread, taking a student loan was the only way to go to college. "[My] loan total is around $150k, including interest," Scott said. "I've paid $18k so far, and it's all been interest, so I just assume I'll be paying it forever. It's all federal, so it's manageable. Just an annoying bill every month."

When asked if he thinks he made the right decision, Scott said: "I might try a few things differently so I could actually pay it off, but at this point, it's not breaking me."

"My overall point has not been 'get me off the hook for this' but that I could be putting that money into the economy; this is an economic stimulus more than anything," he added.

The enormous size of student debt isn't affecting only the millions of people who owe, but it burdens the U.S. economy as well. Nearly 92% of student loan debt is supported by the U.S. government, making it an important political issue. 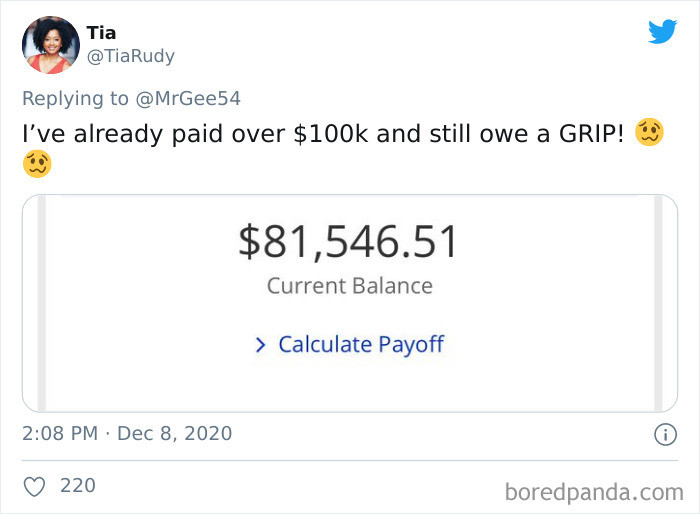 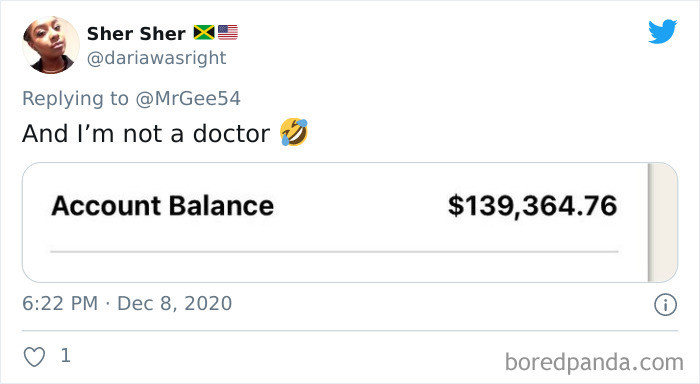 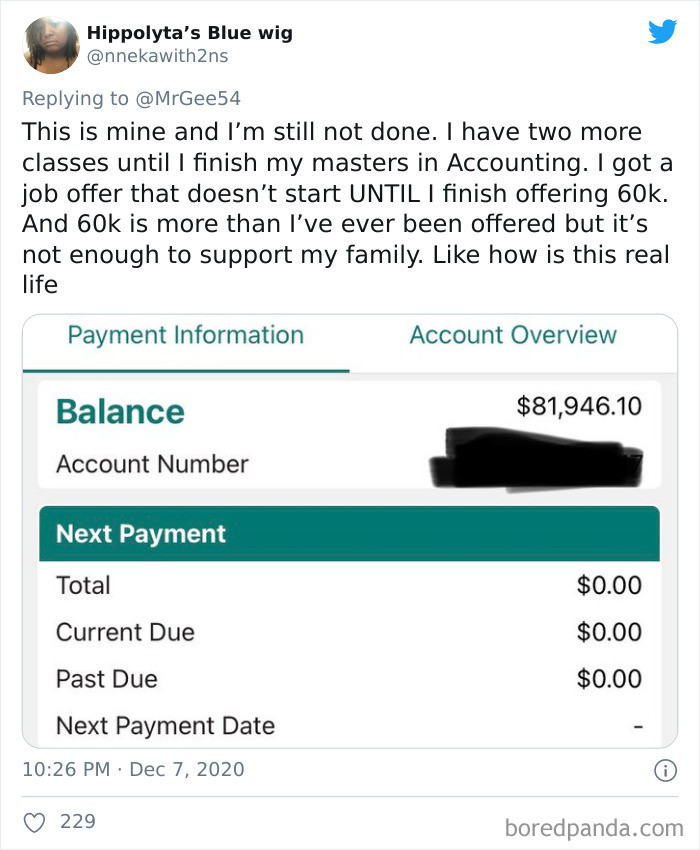 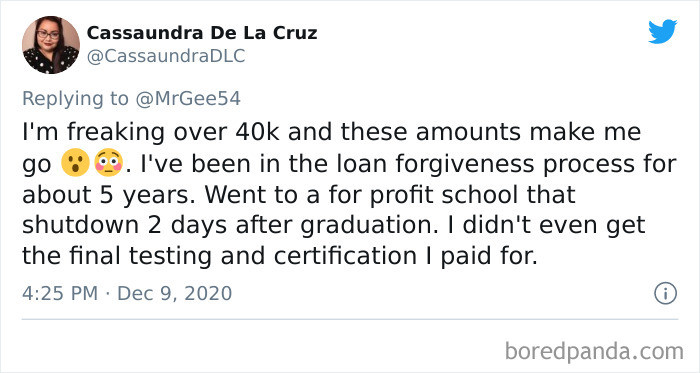 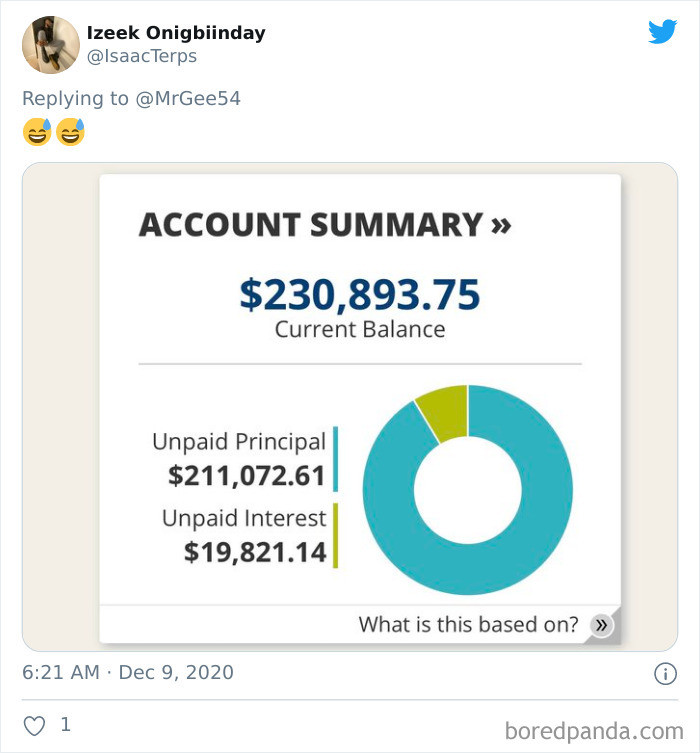 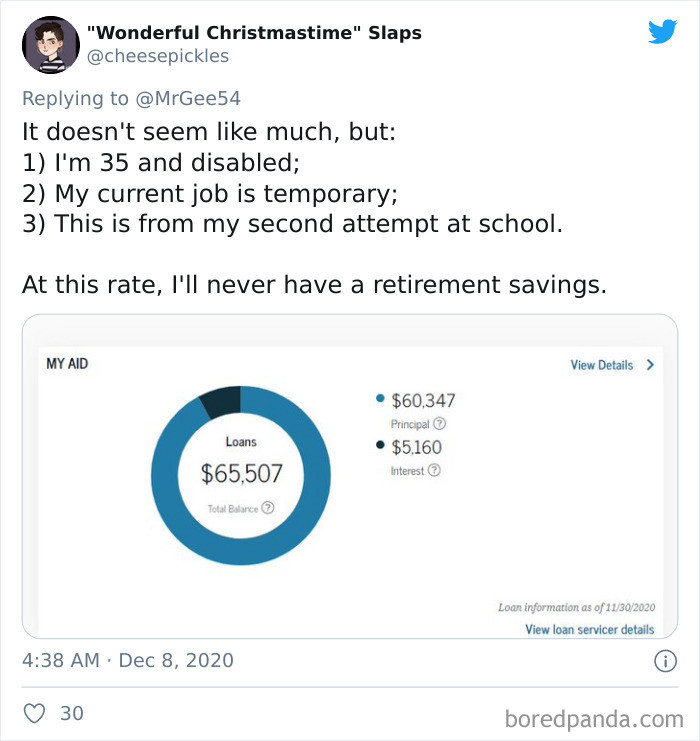 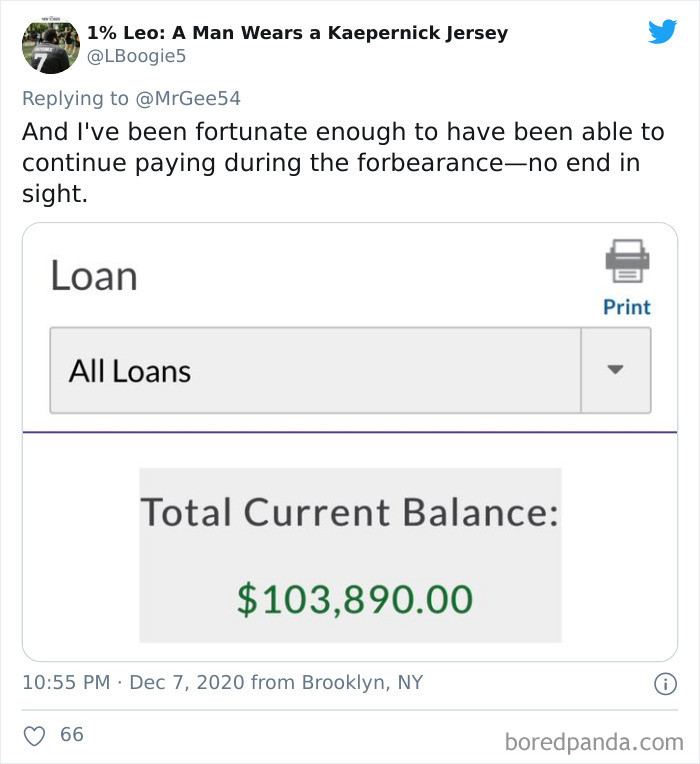 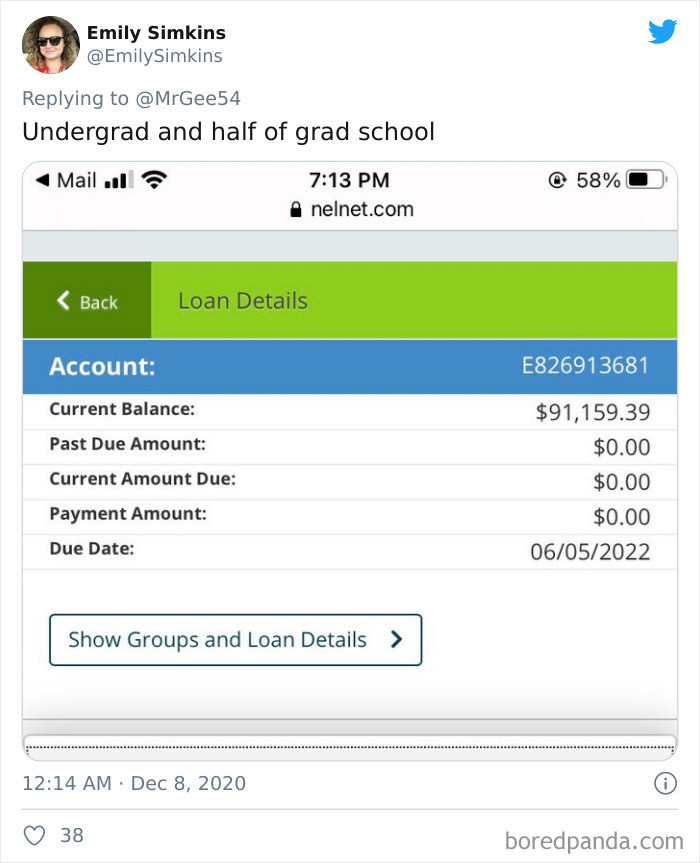 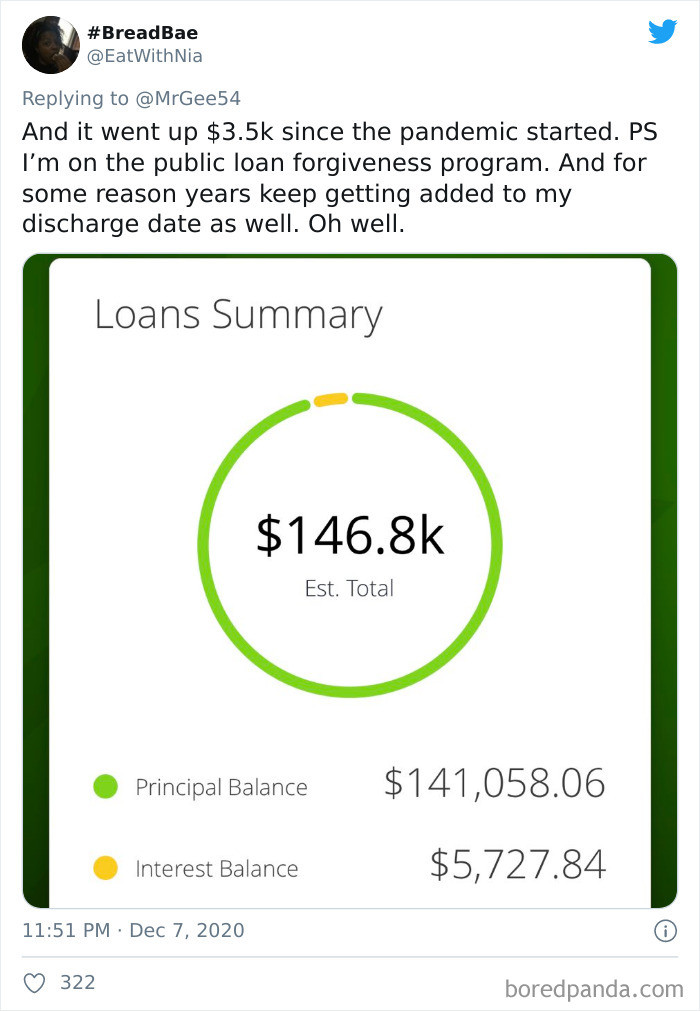 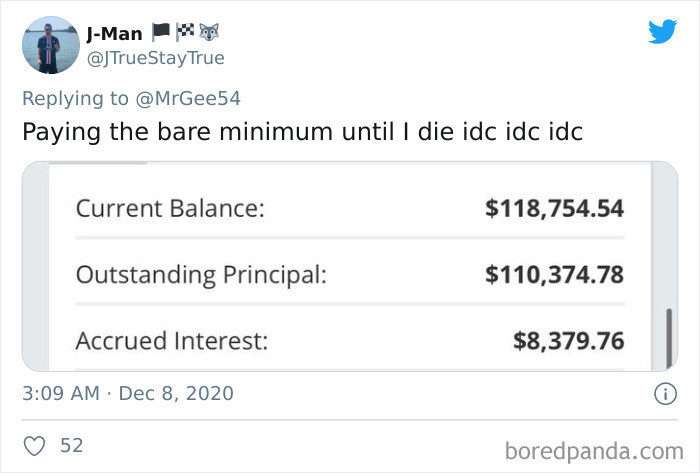