Approximately 1 in 5 women in the United States (18.3%) has been sexually assaulted at least once in her life, the NISVS report says. Most rape victims (79.6%) suffered it before they’ve turned 25.

To make matters even worse, different government agencies are releasing “How to avoid sexual assault” instructions. And they are ridiculous. It’s like saying that women somehow provoke sexual assaults.

A Twitter user going by the name @xcrazyraerae went on to ridicule those instructions, and her post got a lot of attention. She said: “I’m also a victim” and that “it shouldn’t be our job to avoid it,” the thread reflects on all the nonsensical advice women are given on a daily basis. The irony is that all the listed points are aimed at men, which makes it not a joke thread, since “they literally need to follow these rules but don’t.”

The author Raeli Nicole Williams, who goes by the Twitter handle @xcrazyraerae, says that she created this post because she got fed up with “this kind of absurd advice.” “I have a sarcastic personality and just started snapping back when people would say those kinds of things to remind people that sexual assault is a male problem instead of a female problem.”

People were first confused with the thread. “They didn’t understand it at first and definitely came at me. I just had to remind them to take the time to read it, and after that, they understood the comedy I was going for.” After reading it, Raeli said, readers would realize the story is sarcastic. She added that she received a lot more criticism from men who disagreed with her as opposed to women.

“I think this all comes down to the patriarchy and the idea that men are superior. There is a deep-rooted idea that women are meant to serve men and that men can do no wrong. Therefore, the blame for assault is directed at women rather than men,” she explained.

Raeli mentioned that people tend to forget that males can be sexually assaulted as well. “It’s something that’s not often talked about because men are seen as strong and superior.” In fact, “that’s one of the issues I had to face and account for when I claimed that sexual assault was a ‘male problem.’”

Raeli didn’t expect her thread to go viral, but she’s glad for it for the reason that “victim-blaming is something that is so important to talk about.”

When someone asked if this thread was a joke, the author replied: 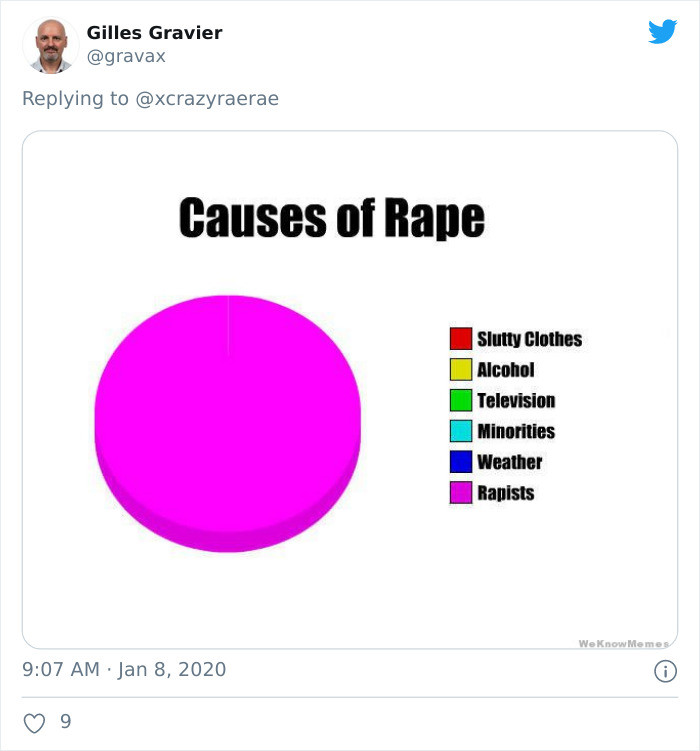