It's a privilege to have a babysitter come over to watch your children while you go out and do your own thing. There's a special bond between babysitters and the family that they provide their services for.

You need to trust an outsider to take care of your kids while you're not around and looking for someone that trustworthy is no easy task. In this story, the babysitter is not the troubled one — it's the mom.

The OP (original poster) is a 28-year-old female who babysits on weekends to make extra cash. She's loyal to this family because she loves the kids and it's quick money for her.

OP's main issue is that the mom is never home on time. She also doesn't give OP an approximate time that she'll be home; she once went out for "brunch" which lasted from 11 AM to 7 PM.

After that, OP asked her to at least inform her about the time that she'll be home. The mom did what OP asked but she still somehow failed to show up at the agreed-upon hour.

Because of the mom's disregard for OP's own schedule, OP can't follow through with her weekend plans because of the mom's unreliable schedule. One Saturday, OP went to her client's house at 6 PM and the mom is supposed to come home at 9 PM.

Big surprise, the mom failed to be home by that time. The kids are in bed by now and OP messages the mom to ask her about her whereabouts to no avail.

Another hour passes and still no response. Midnight arrives, OP's plans are ruined, she's exhausted and pissed but there's still no answer from the flighty mother.

The patient babysitter once again leaves a voicemail to tell the mom that if she's not home by the next hour, she's considering the kids abandoned and she will inform the cops.

She texts the mom the same thing but receives no reply.

Another 30 minutes pass and OP calls the mom once again.

The call goes to voicemail on the second ring. OP messages the mom one last time but the dedicated mother leaves the babysitter on read.

Had the mom texted OP to inform her about what time she'll actually go home, OP said she would have waited.

OP has never met the dad of the kids or the extended family so she can't inform anyone about what's happening. She gives the mom another 15 minutes and tries to call her again but there's still no response.

Finally, tired of getting the run-around, OP calls the cops' non-emergency line.

The police showed up and OP showed the agreement between the mom and her that she will be home by 9 PM. Even the police tried to call the mother but she still wouldn't pick up the phone.

The police takes the kids to the police station and OP is allowed to go home.

OP was deep in slumber when she was woken up at 3 AM by a frantic phone call from the mother of the year. She was asking where the kids are, why OP is nowhere to be found to which OP answered that she only did what she promised.

OP told the mom to go check on her kids at the police station. The mom started cursing at OP and OP hung up on her then went back to bed.

The morning after, the mom messages a long letter to OP informing her about the results of her action.

The father was called in and a DCF (Department of Children and Families) investigation against her has been launched. The mom insulted OP but the babysitter didn't think she did anything wrong.

That is until she spoke to a friend who has kids who told her she should have waited for the mom and just refuse to babysit for her in the future. The friend also thought OP was just being petty.

What kind of mom does this? It's also very disrespectful towards OP to not honor the agreement.

What happened was probably the best thing for those kids 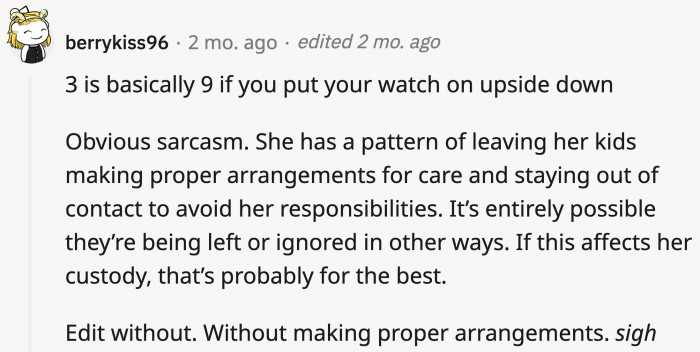 Right? Wouldn't you be worried if your babysitter called you that much?

She is a neglectful and entitled mom... 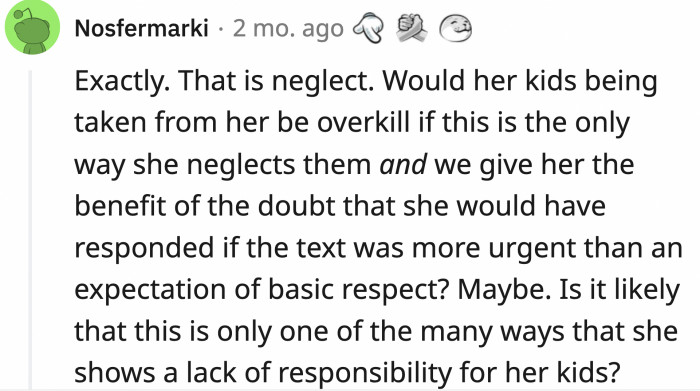 ... who found out that her actions and inactions have dire consequences 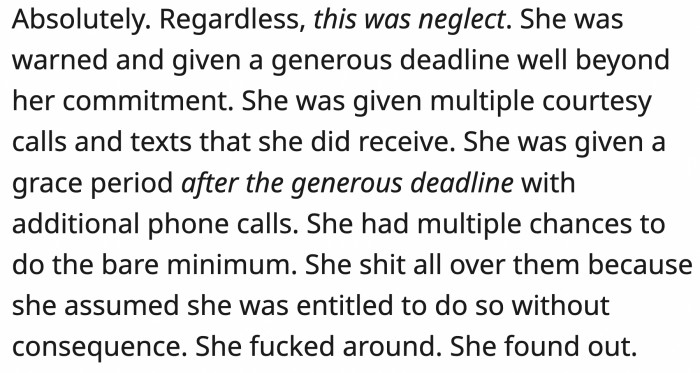 It's a learned behavior that needed to be stopped

The mom is a walking red flag...

She finally noticed her children were missing at 3 AM

How is that an acceptable behavior in any way?

The mom would have at least paid OP for overtime surely

But of course she didn't

According to the kids, he is.

The mom was definitely taking advantage of OP's kindness and she was most definitely crossing a boundary.

The mom willfully ignored all of OP's calls and texts.

It's not that far out of reach to be honest

"Oh no, it's the consequences of my actions!"

Even other parents who were in actual emergencies had the common courtesy to inform their babysitter AND paid them for their service!

What OP did was not an overreaction. She only did what she thought was best for the kids, which is the mother's job but she was too irresponsible to do it.

It must have felt horrible to come home to an empty house with your kids nowhere in sight but she should have thought of that before staying out until 3 in the morning. OP told her what exactly she would do, all the mom had to do was go home.

At the end of this, it's the kids who will get traumatized by their mom's behavior. No children deserve an absentee parent.