A 20-year old Billy Dunn, AKA @billybillynyc on TikTok, shared a video where he replied to a comment, talking about the ridiculous things people say around him, totally unaware that he is half black.

“I was at a party, and the only other Black person left. After he left, one of the white dudes there proceeded to say the N-word. Not even in a song or nothing, just said it out loud. When I confronted him about it, he said, ‘What? He’s not here anymore.’ Little did he know, I’m a double agent. Needless to say, that situation was handled,” Billy, who has a black dad and white mom, said in the video.

His TikTok quickly went viral, and other biracial people shared their stories as well.

Reply to @chynali The reality of what people say behind closed doors. All of these situations were dealt with accordingly. 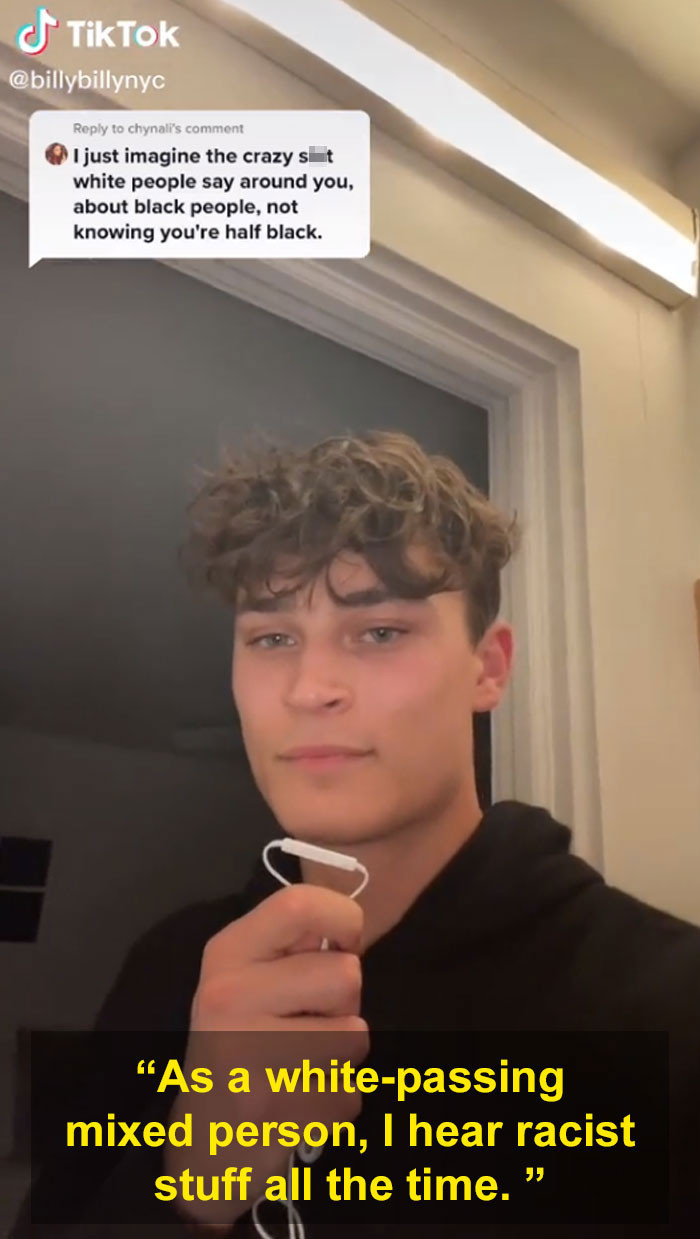 A 2015 study conducted by the Pew Research Center showed that multiracial Americans lead the social and demographic change in the U.S. They’re young and proud and believe their mixed racial legacy has made them more open-minded.

Cole Hedgecoth is an Atlanta-based hip-hop artist who is also very proud of his racial background, says “I love my family, and it’s given me a unique perspective on racial inequality.”

“[My racial background is an important part of my identity], though it isn’t everything. I celebrate diversity and want people to know that I’m proud of who I am, but I won’t let people dehumanize me by saying racist things.”

Cole said that being biracial (black-white) enabled him to see the extensions of concealed racism in the U.S. he wouldn’t have if he were only white. “Having experienced it opened my eyes to a whole new perspective. I’m grateful to be able to see things for what they are.” 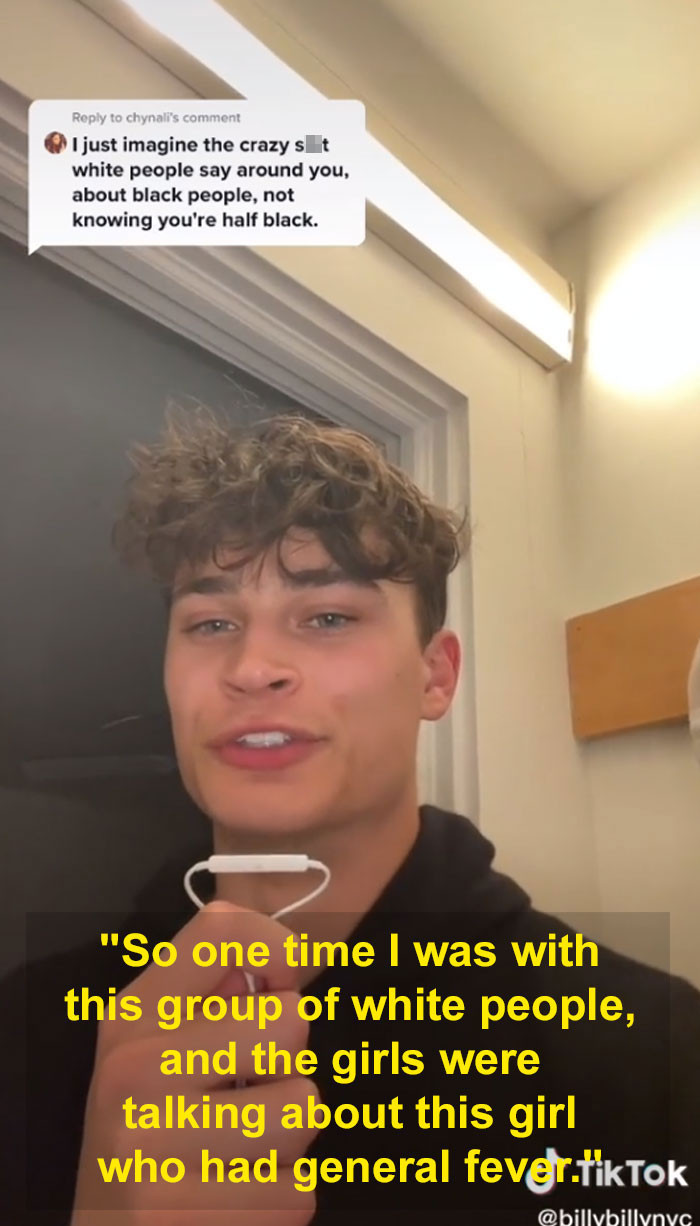 Billy is also very proud of his racial background. “My dad made a big effort growing up to tell me and my siblings stories about what he and his family members experienced as black people from the south. I credit him with a lot of the knowledge that I have about the civil rights era.

Mainstream media oftentimes makes people with similar backgrounds to me feel like they have to fit into one racial group or another. As I’ve gotten older, I’ve realized that being biracial gives me a unique perspective into a lot of topics in the media today, such as racial profiling and police brutality. I always aim to try to use my privilege and platform to advocate for things I believe in.” 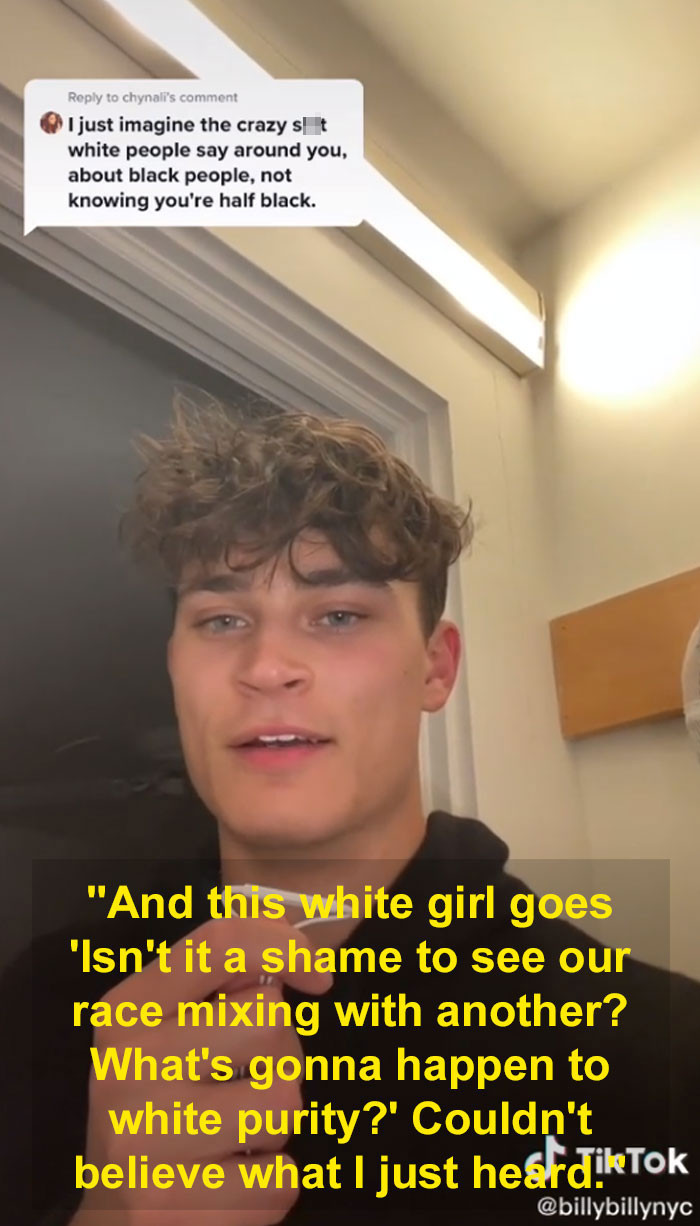 In a study we mentioned previously, most (55%) reported being subjected to racial jokes and slurs, and 24% have felt frustrated because people have made statements about their racial background. 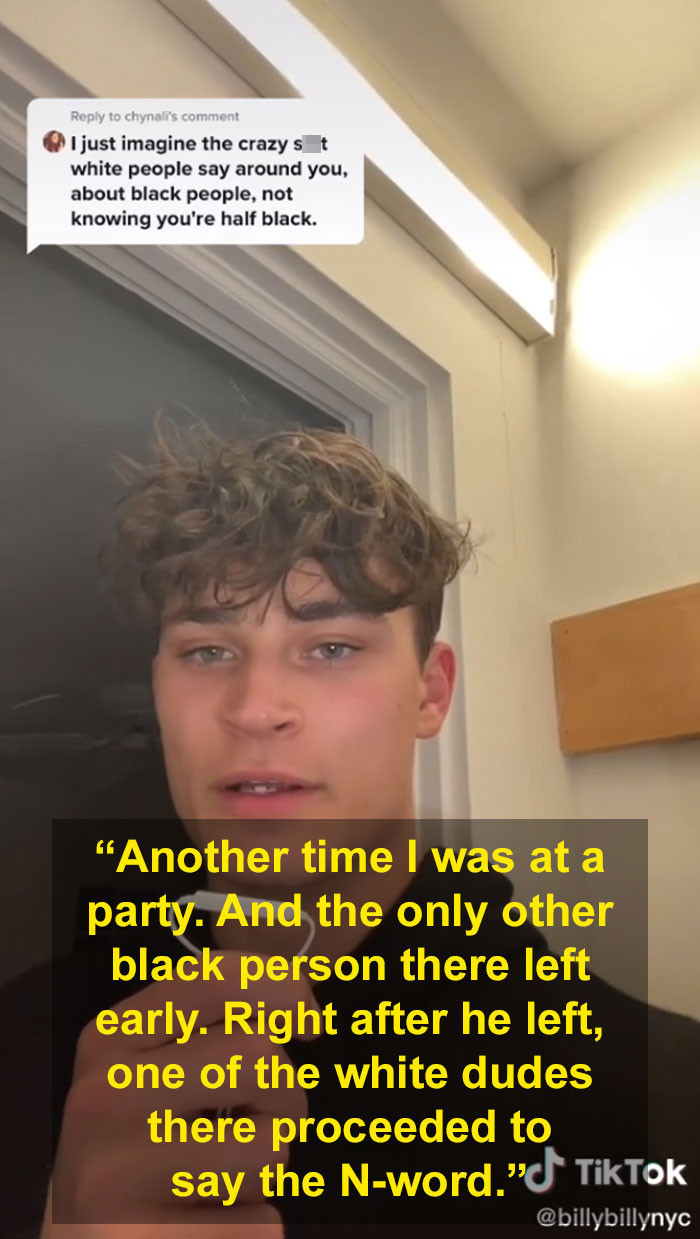 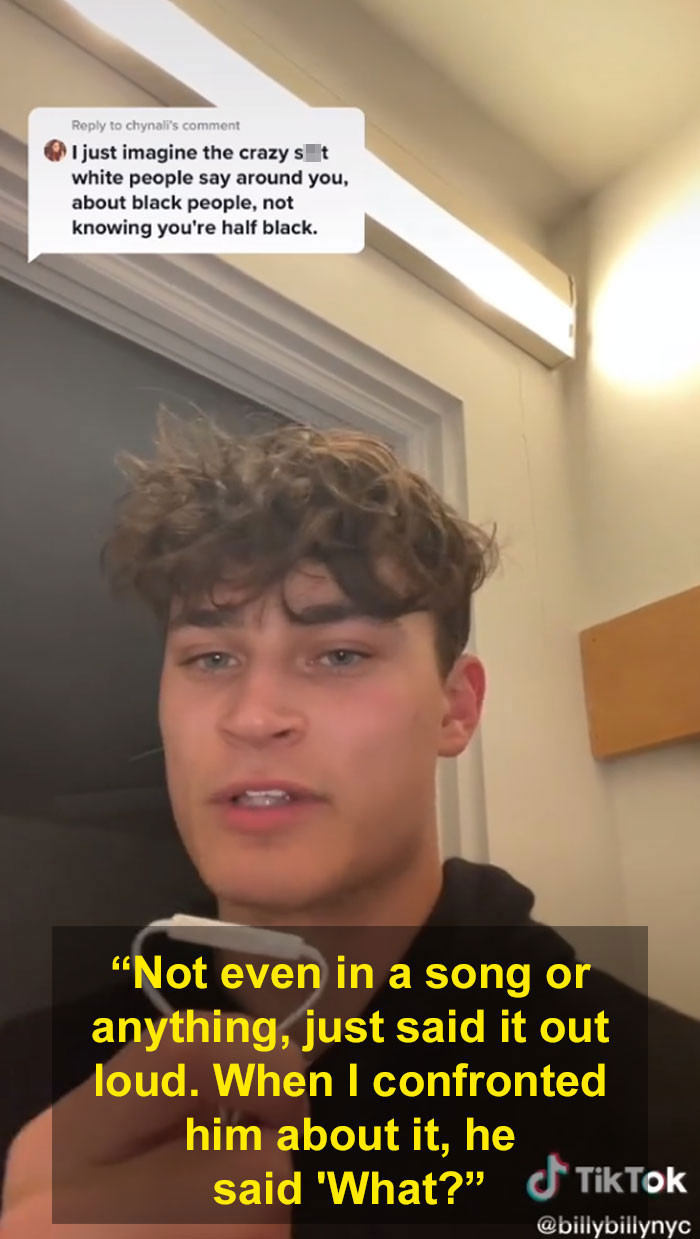 Mixed-race adults face discrimination in a similar way as blacks. To illustrate - among adults who are black, 57% say they have received bad service in shops and restaurants, identical to the percentage of biracial black and white people who reported the same. In addition, 42% of single-race blacks reported they’d been stopped by the police for no reason, as do 41% of biracial adults. 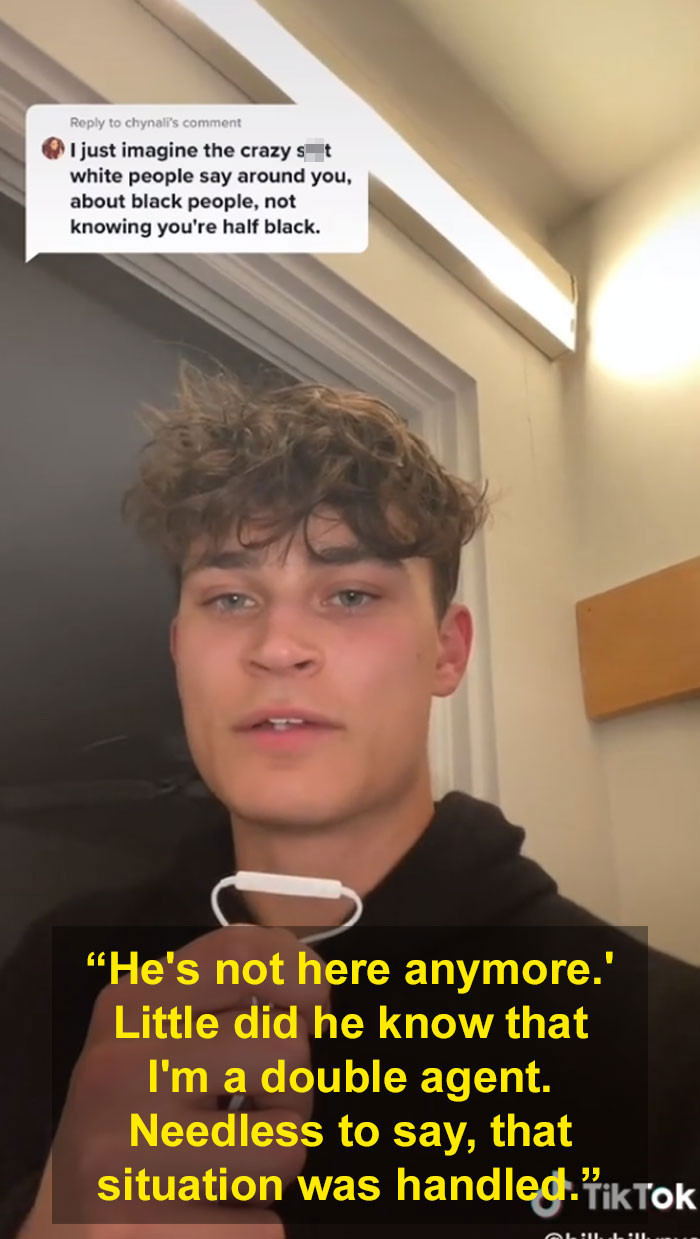 “I don’t think you have to be one race in order to educate yourself on race relations in this country,” Billy stated. “If any person makes the effort to listen to their peers and learn about what’s going on, then that person has the ability to make real change on any level.

If there was one thing I want people to know about me, it’s that even though I talk about my experiences very openly on social media, it is something that was very difficult for me growing up and something I still can be very cautious talking about.

My goal is that if there is somebody who looks like me who may be struggling with their identity, I want them to know that they are not alone and that they don’t have to conform to what society tells them they are just because of how they look,” he explained. 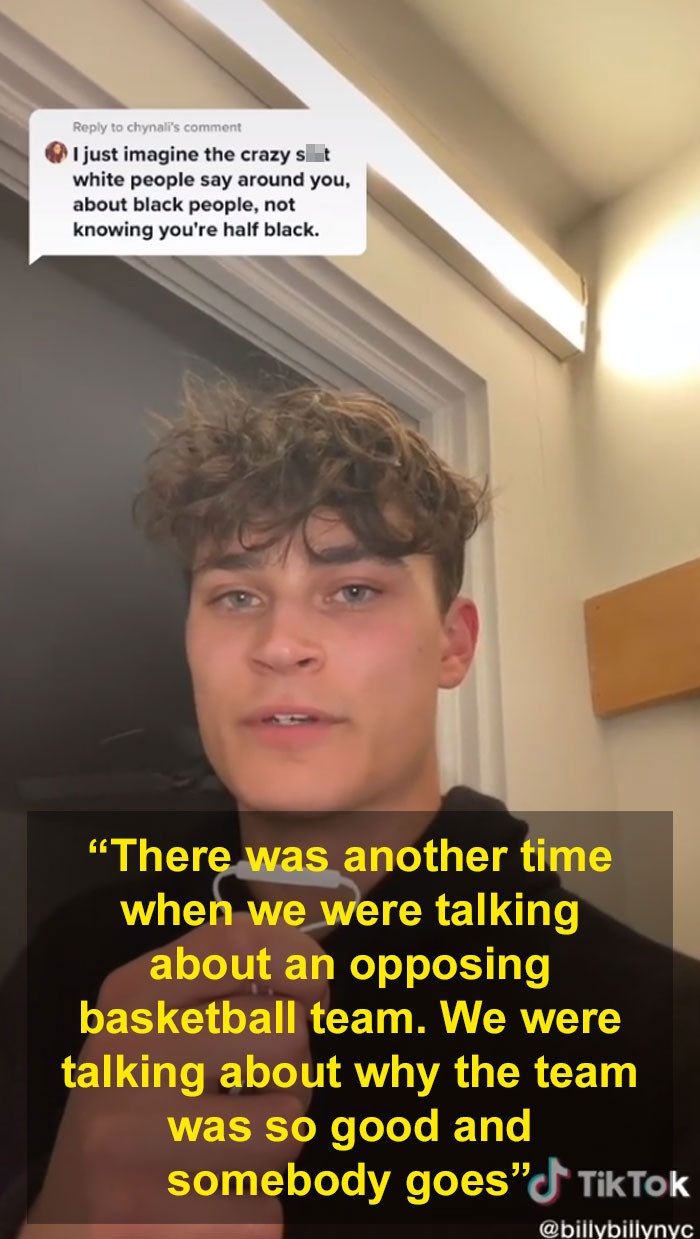 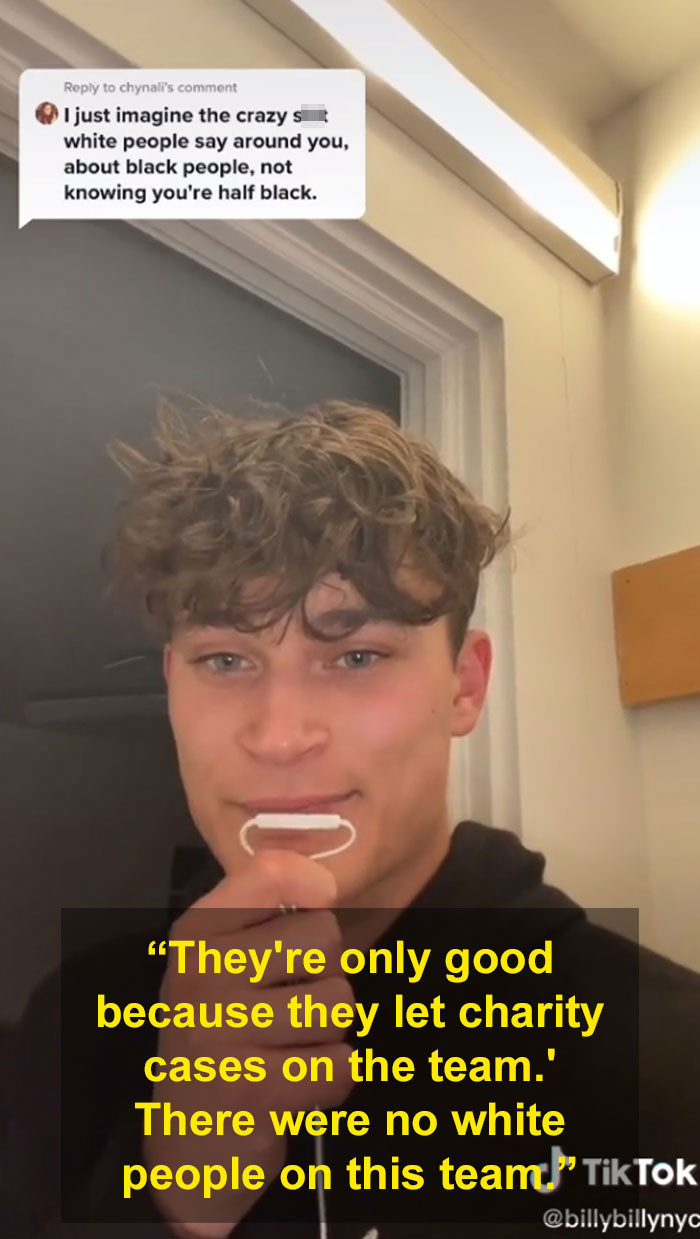 “As long as the conversation continues, race relations should improve,” Hedgecoth added. “I think it’s unlikely that racism altogether dies out anytime soon because racists raise kids to be racists, but if people continue to fight against inequality and have a conversation about discrimination, slowly, people will begin to change their perspective.”

Billy’s video has gathered more than 2.7 million views and has inspired others to share their stories 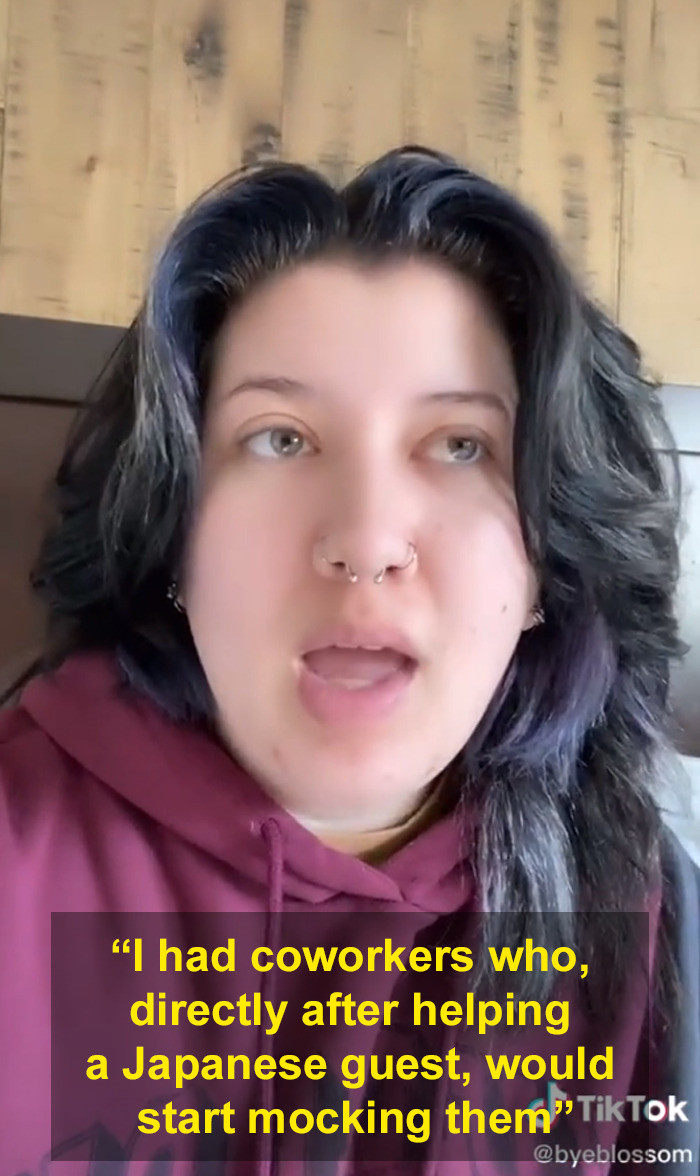 #stitch with @billybillynyc dont even get me started on the nail lady "jokes". tbh the microaggressions sometimes feel worse than outright slurs

“I’m half-Chinese. I used to work for Disney and we would have a lot of Japanese guests there. I had coworkers who, directly after helping a Japanese guest, would start mocking them. Usually, for the shock value, I’d immediately tell them I was Asian and they’d be like *covers mouth with hand*.” 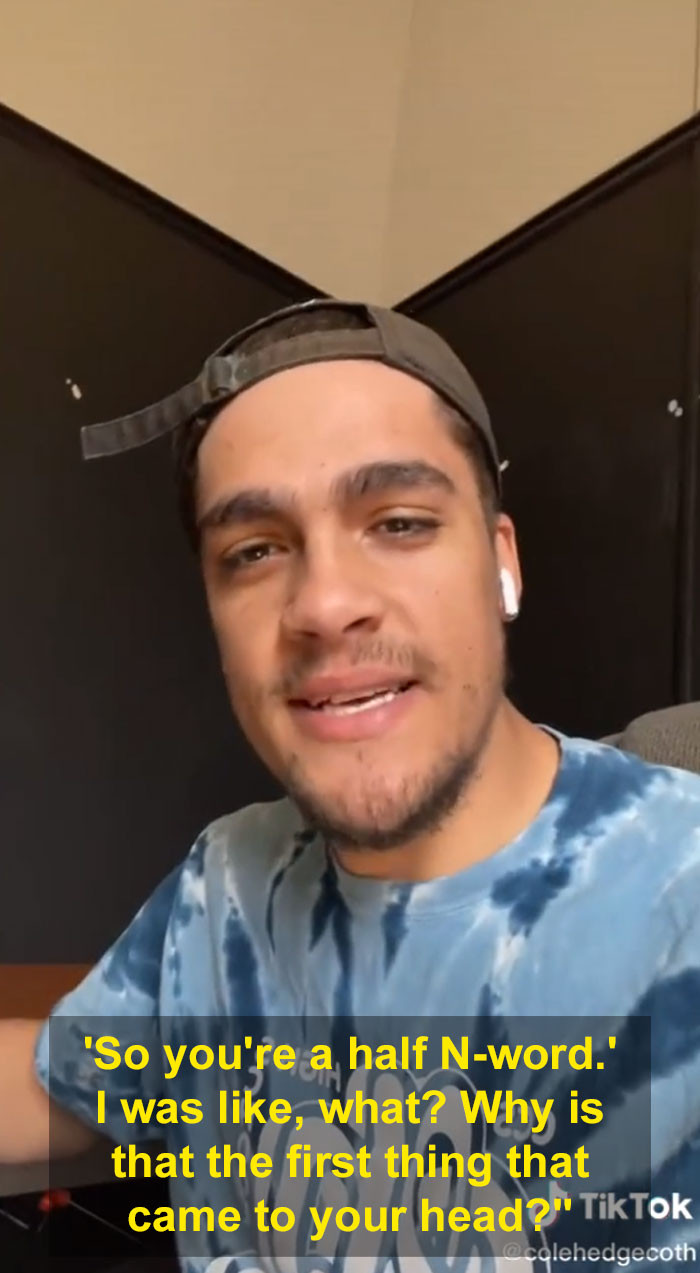 “I didn’t really realize how racist some people are until I was in an all-white space and people didn’t realize that I’m mixed. For example, I was at a pool party one time and this guy asked me, ‘What are you?’ I was like, ‘I’m mixed.’ He asked me with what and I was like, ‘Black and white.’ And he was like, ‘So you’re a half N-word.’ I was like, ‘What? Why is that the first thing that came to your head?'” 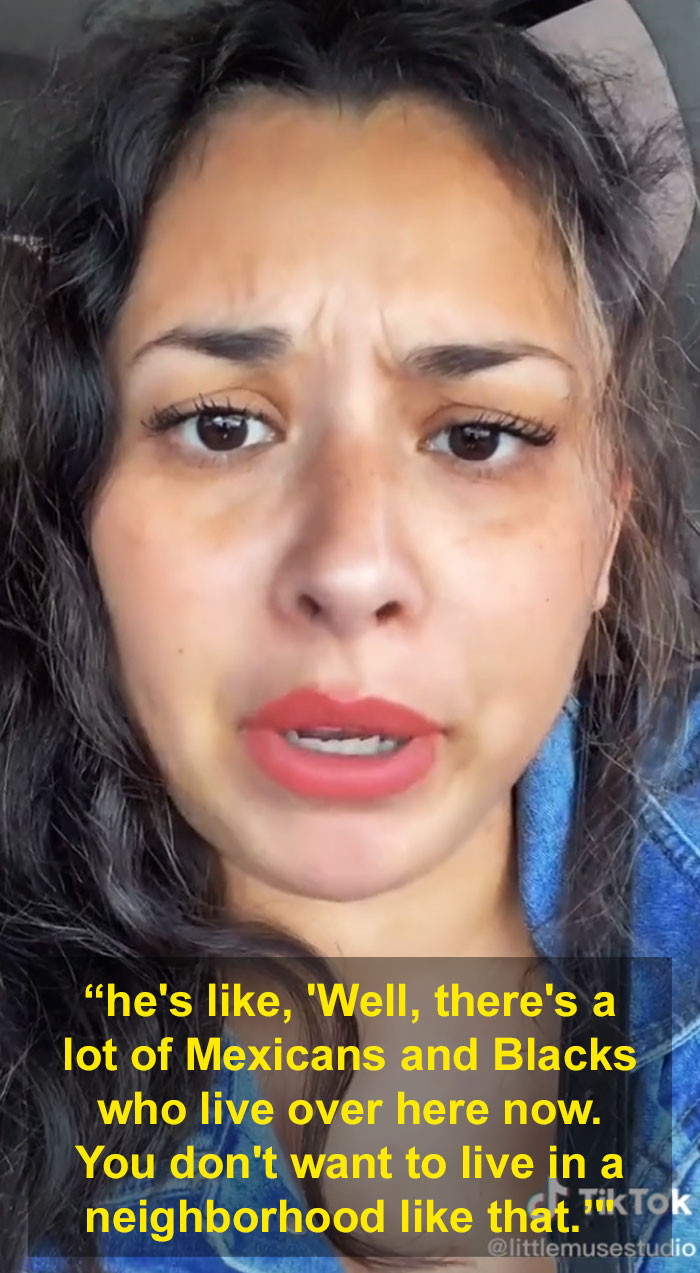 “I am Mexican and one time I was dating this guy, and his grandpa had just moved to a different house, and he said, ‘Yeah, I grew up over here… but it’s really different now.’ I was like, ‘How so?’ And he’s like, ‘Well, there’s a lot of Mexicans and Blacks who live over here now. You don’t want to live in a neighborhood like that.’ I said, ‘You don’t? Why wouldn’t you want to live in a neighborhood with really good food and really cool people?'” 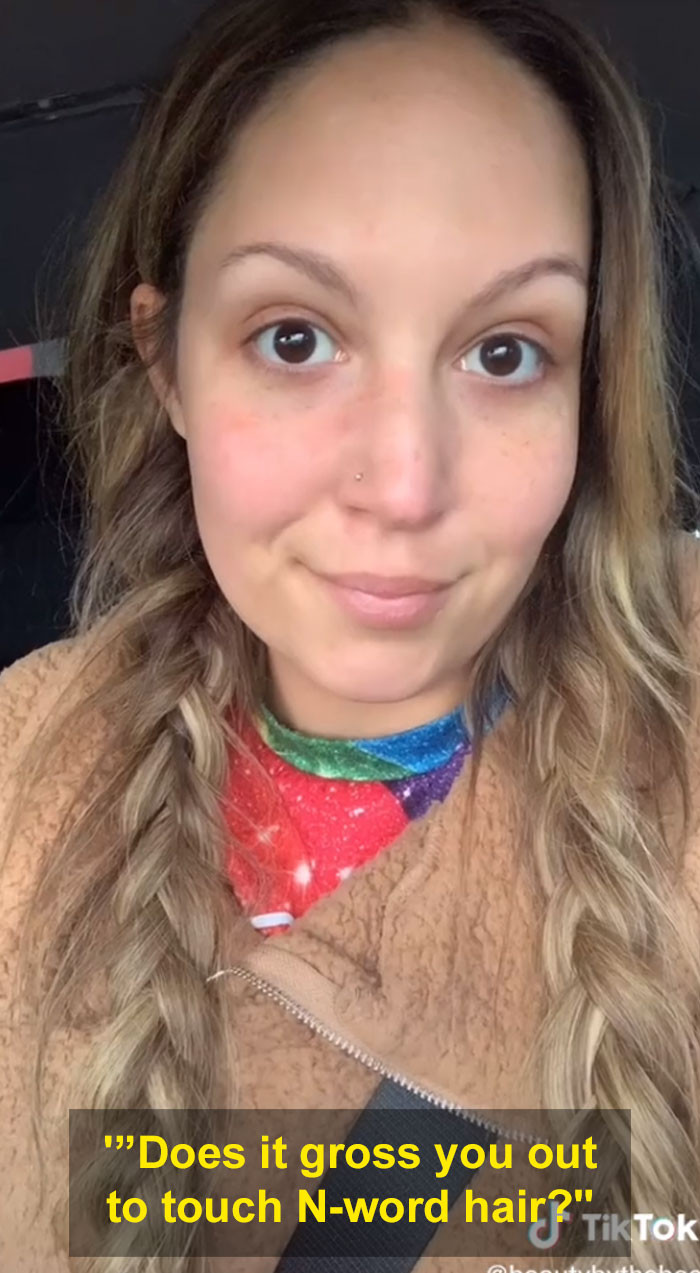 “When I was in beauty school, I was going to one of my friend’s houses, and her mom asked me, ‘Does it gross you out to touch N-word hair?'”

#stitch with @billybillynyc comment if you want to hear more. This just reminded me of so many horror stories! So glad I left. #racists #whitepassing 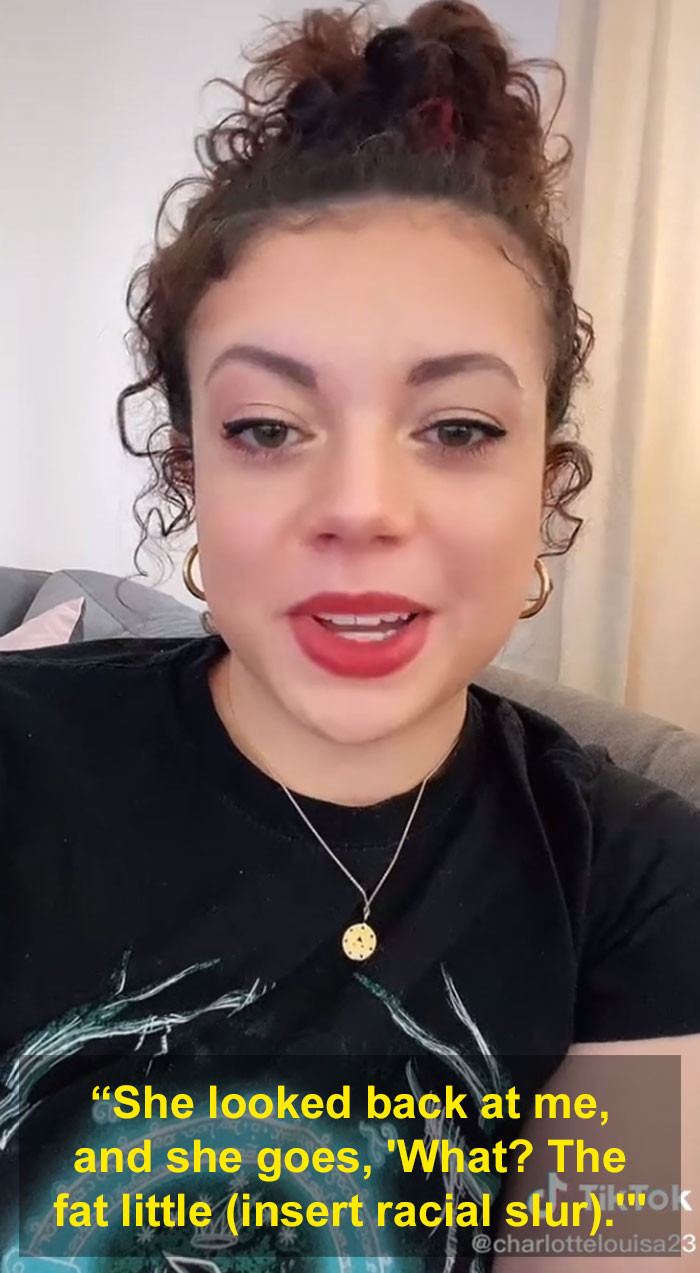 “I used to work in sales, and this one time, a white lady came into the store and asked me where she could find XYZ. I was busy at the time, so I said to her, ‘Oh, you can just see my colleague over there. He will be able to show you where you can find what you’re looking for.’ She looked over at him, she looked back at me, and she goes, ‘What? The fat little (insert racial slur).'” 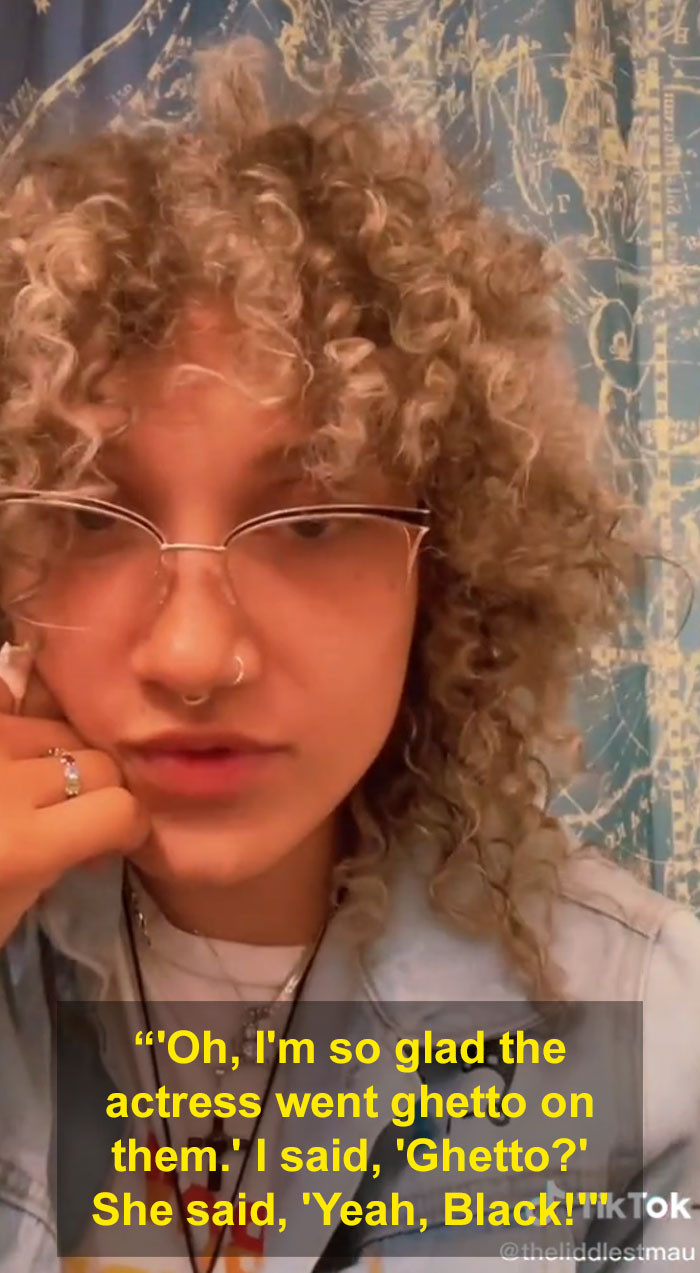 “If you’ve worked in film before, you know 11 hours is a normal day. One time, an actress cried to the director. She said, ‘My feet hurt, it’s time to wrap.’ The director said, ‘One more take.’ The actress said, ‘OK, then you’re going to pay for my medical bills.’ I’ve never seen a director say wrap so quick in my life. This girl who overheard had the audacity to say, ‘Oh, I’m so glad the actress went ghetto on them.’ I said, ‘Ghetto?’ She said, ‘Yeah, Black!'”

#stitch with @billybillynyc #whitepassing #incognito it’s sad I have so many more stories ... esp from film sets 💀💀💀#fyp #foryoupage #foryou 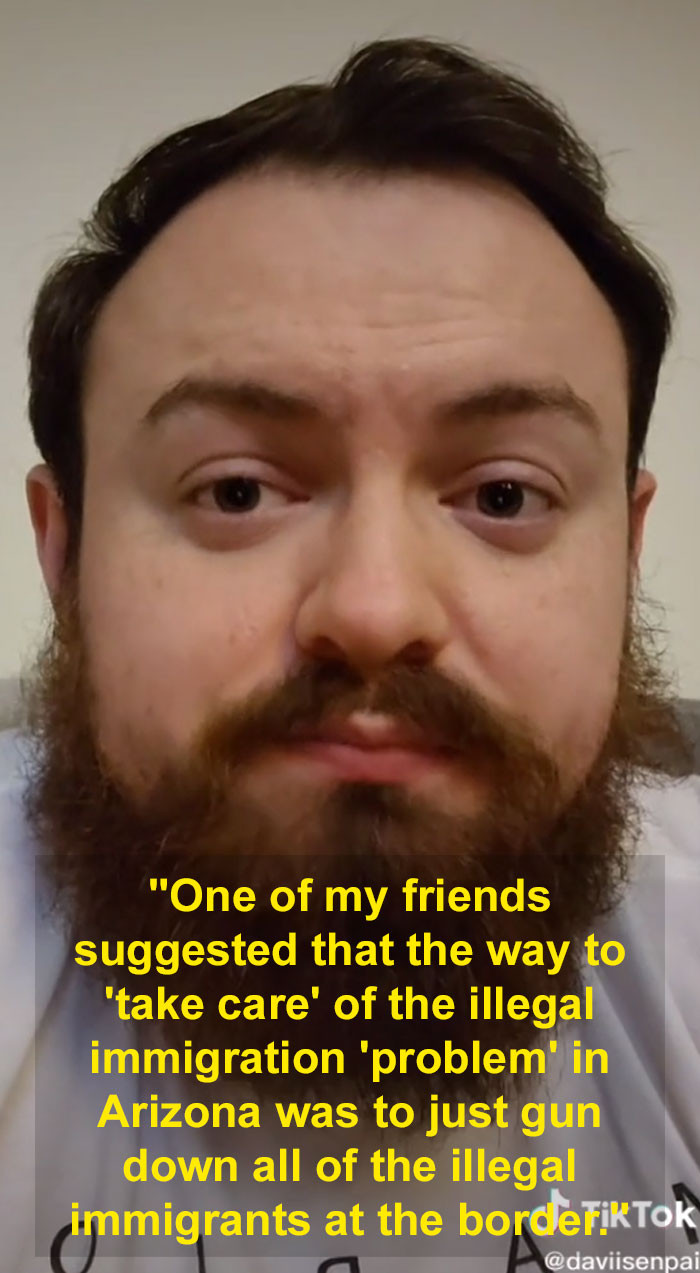 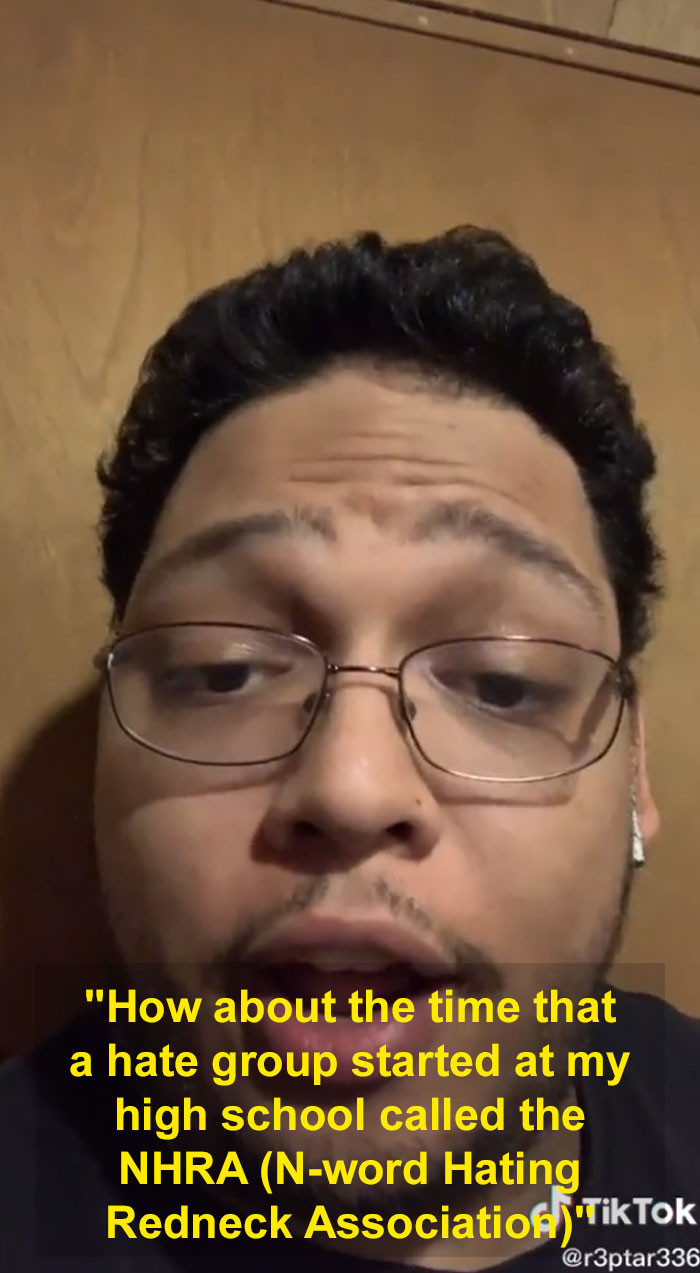 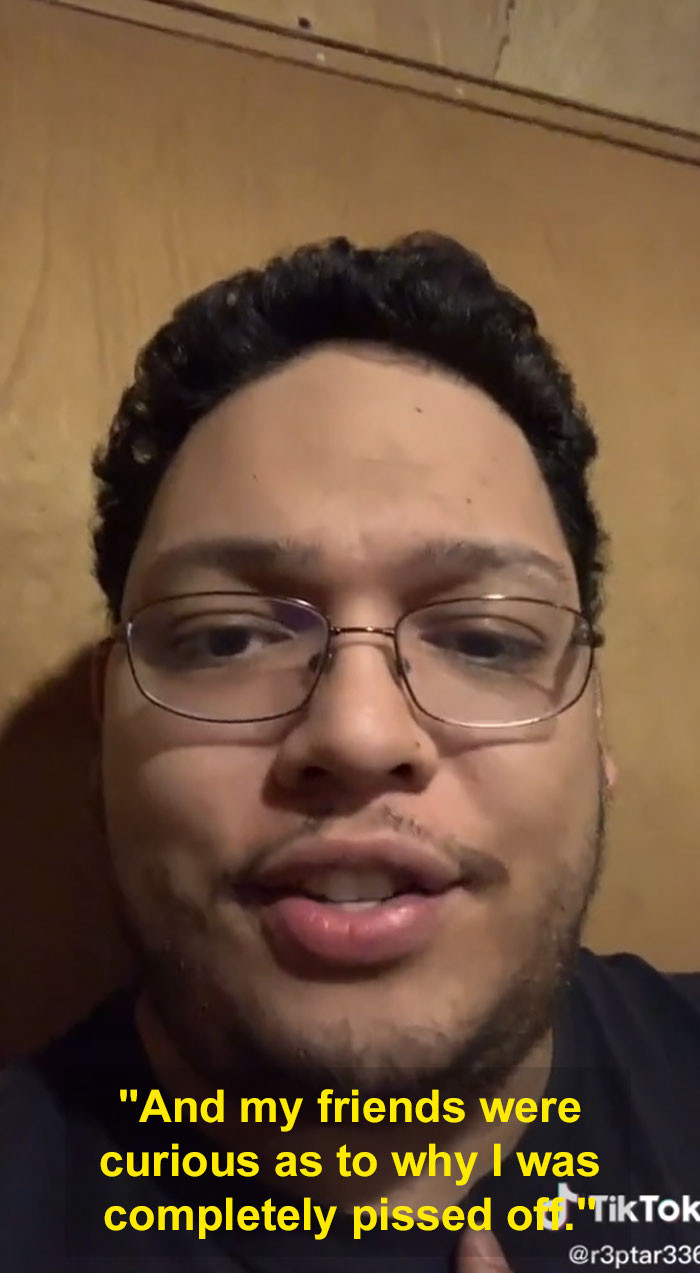 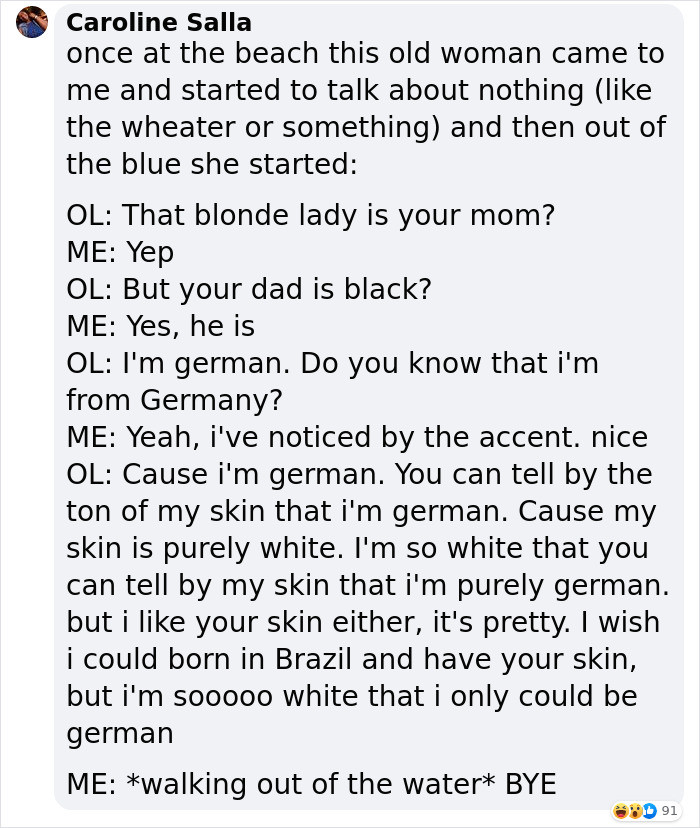 The debate has spread to other social platforms: 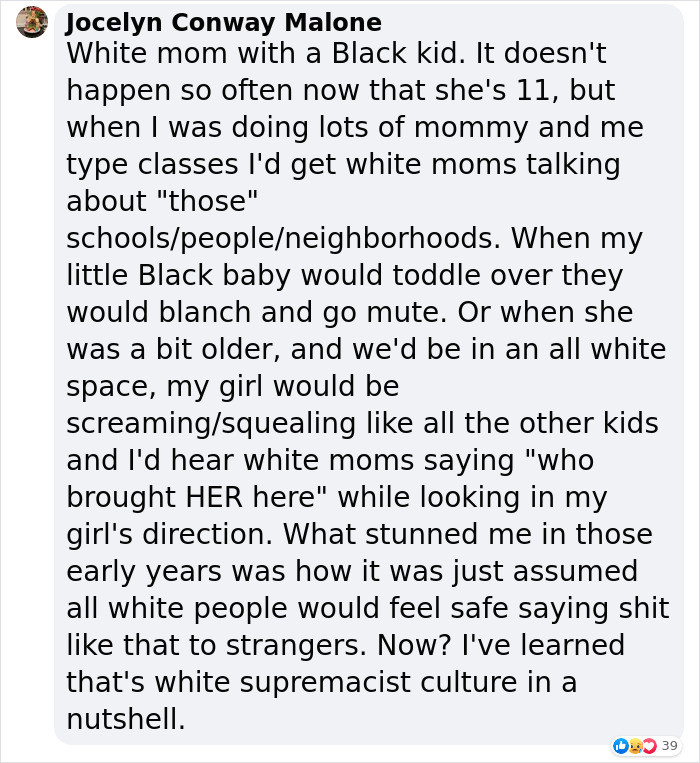