It's almost inevitable that if you introduce two different animals together, that have never met, that there might be some tension. Many of us have experienced this if we have gotten a new pet or if we have decided to have an animal play date.

This situation doe not always go as planned and that can cause problems. In this case, it definitely has caused an argument between a woman and her husband.

Her husband has an 18-year-old cat and she has a 3-year-old bulldog. Once they moved in together, the couple slowly started to introduce the animals.

Most of us would take this approach. She says that she's tried many things to get them to get along, but for some reason, her husband's cat does not like the dog.

This woman says that the cat has made it very known that it doesn't like the dog, so she's asked her husband to re-home it. Now, her logic is that she's pregnant and wants to keep her dog and the baby safe from what the cat might do since it's already displaying violent tendencies with her dog.

She wants to know if she's the asshole for asking her husband to re-home the cat. Let's dive deeper into this story to find out if she is the asshole or not.

Here's the story...She starts off by telling their background and explaining what the situation is and what they've tried so far with the animals.

But then....She goes on to say that she asked her husband to re-home his cat.

People are definitely saying that she's the asshole.

A lot of people are saying that they would leave the marriage over this.

This commenter is saying how they introduce pets before moving in together. I'd say this is a smart move.

A lot of people are saying she's heartless for treating the cat this way.

Even people who are allergic to the animals of their significant other, put up with it. It's just what you do for your loved ones.

A great perspective to look at. How does she think the cat feels?

They have a point. Senior cats, or animals in general, don't do well with changes like rehoming them at that older age.

I mean, but is the cat really prone to hurting people or the baby or is the OP just being a bit dramatic

This person is right. This is a terrible way to communicate by just telling him to get rid of the cat and rehome. Where is the compromise?

Commenters are here to give her advice on other alternatives for the cat instead of rehoming it.

People are really taking this AITA story to heart, so yeah, I'd say she's the asshole.

Reddit decided it's best for them to cuddle their fur babies extra tight today for this poor cat.

This commenter on reddit had a lot to say, and most agree with them. 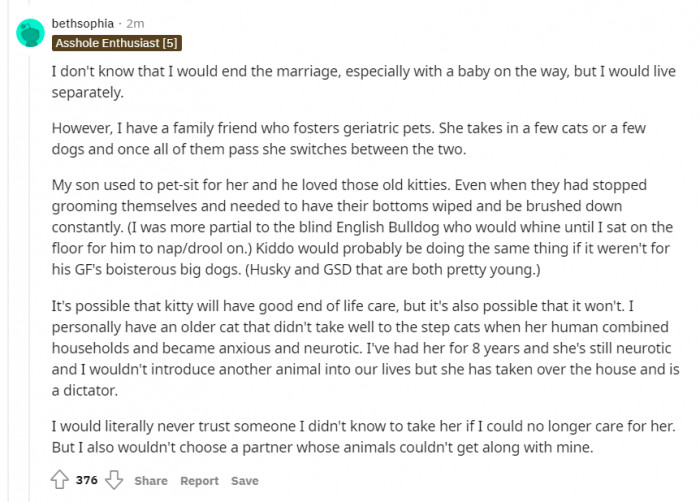 "I'd rehome my spouse real quick"

Reddit is here to the rescue with adoption pages instead of a shelter.

Reddit has come in with a verdict and it is indeed that the original poster is the asshole. I think we can all say that this story made us get in our feels at least a little bit.

If anyone has ever had to get rid of a pet or lost a pet then you know the heartbreak that can come from that. We seriously can't imagine what the cat or husband is going through.

Let us know what you think about this situation and what you would have done.