Unless you've been living under a rock, under a bunker, in the middle of absolutely nowhere, then you probably witnessed all the ruckus and hullabaloo that occurred when the President of the United States, Donald J. Trump, tested positive for COVID-19, AKA the Coronavirus. As we turn yet another corner in unprecedented case counts, it's hard to look at 229k (as of now, it's growing daily,) American deaths and not take Trump's dismissive attitude with an enormous grain of salt.

Turning to Twitter, as expected, POTUS encouraged citizens not to be concerned about the virus. Lacking in a lick of concern for the people he represents is nothing new for Trump, but that hasn't completely numbed society to his outbursts and Twitter-tantrums. This time, the Twitter universe bit back and leading the charge was America's Sweetheart (or America's Ass, depending on your sense of humor and affinity for the MCU,) Chris Evans.

Before being released from he hospital, Trump didn't miss an opportunity to hog even more limelight by having a ride around to wave at his supporters, enraging everyone with two brain cells to rub together. 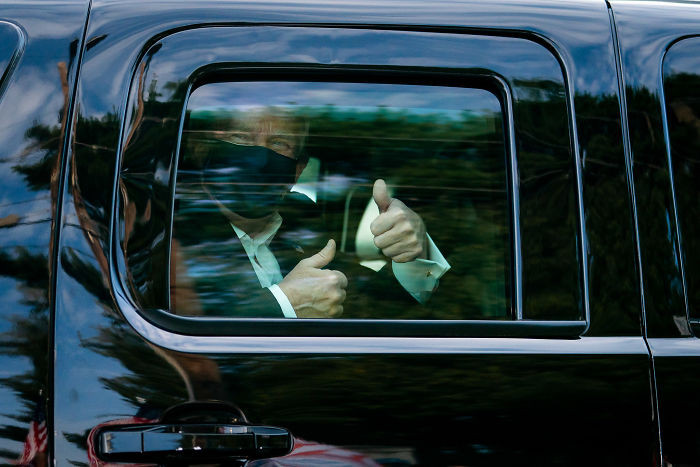 via: The White House

When it was time to leave, unsurprisngly, Trump turned to Twitter. "Don't b afraid of Covid," he said. 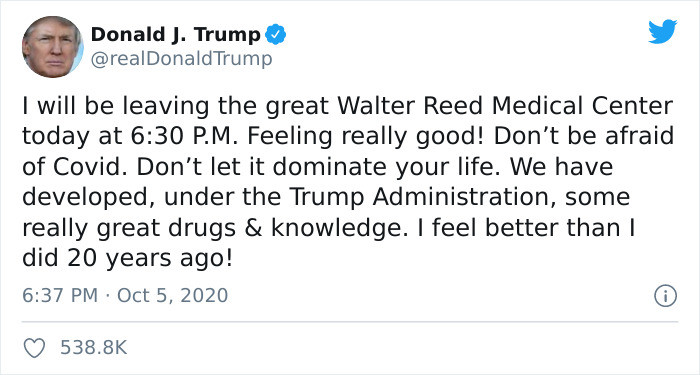 Chris Evans, well known for his iconic role as Captain America in the MCU, was less than pleased with Trump's dismissive attitude toward the global pandemic.

Evans has been openly critical of Trump before. 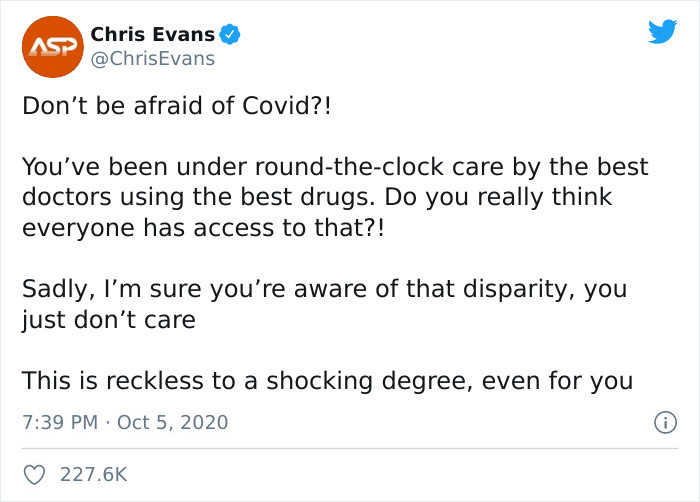 Evans pointed out what sadly not everyone may realize, the healthcare gap that makes Donald Trump feel so comfortable would not make millions of American citizens nearly as comfortable.

In fact, not everyone can even go to the hospital at all unless they're on their deathbed. 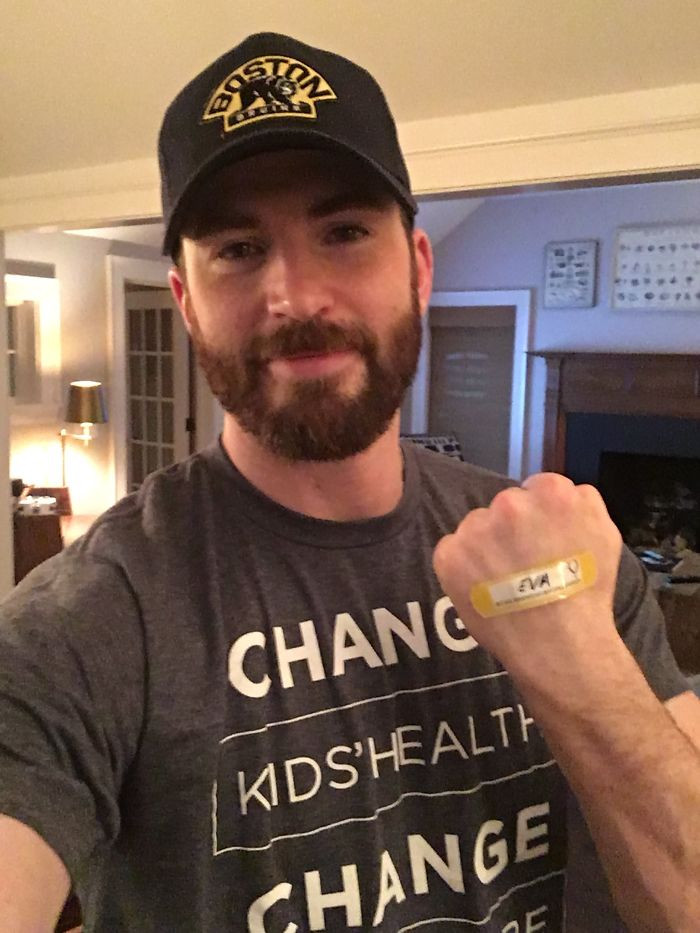 With Evans at the helm, other Twitter users quickly chimed in as well. Their responses illustrated just how arrogant and ignorant Trump's Tweet was. 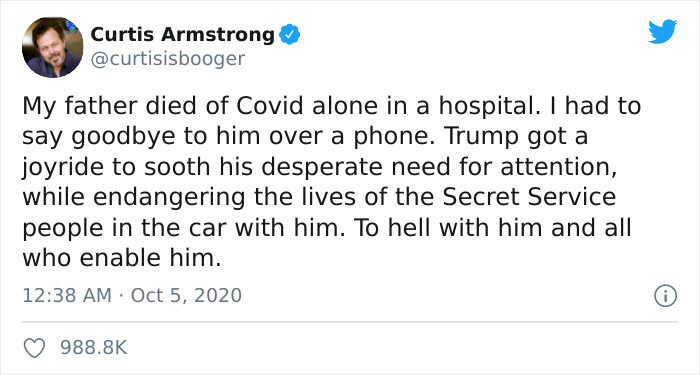 Countless people could not even be present as their loved ones passed this year from this deadly virus. 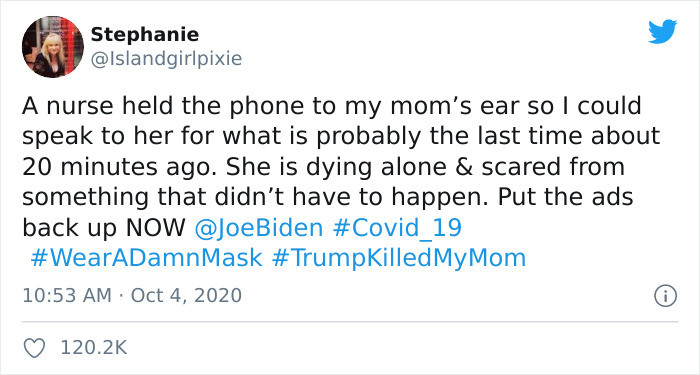 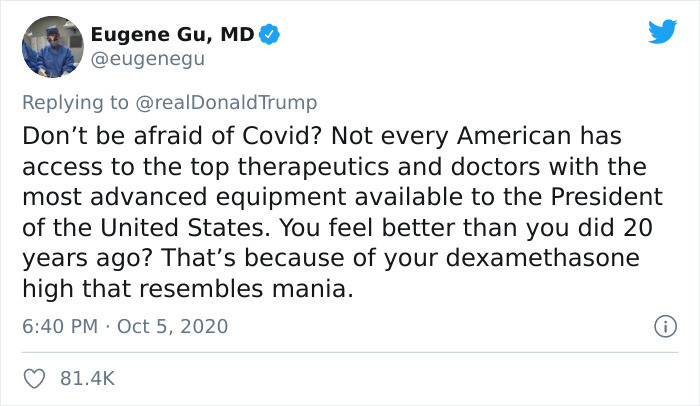 Even more imporantly than merely his experience, is his empathy for his fellow citizens and human beings. 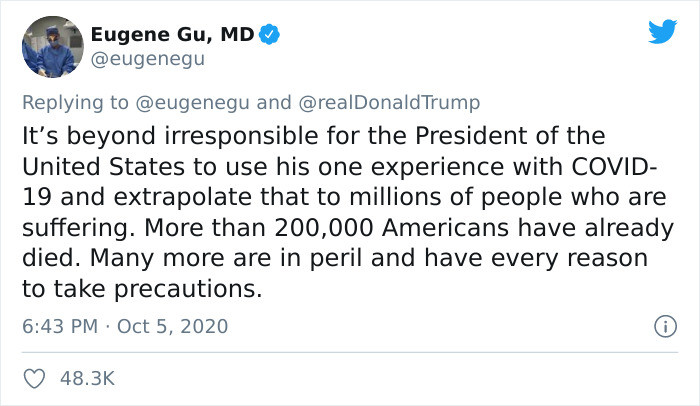 Another Tweet tried to bring a visual to the discussion because it seems like some people these days just can't wrap their head around the enormity of loss the United States is experiencing right now. 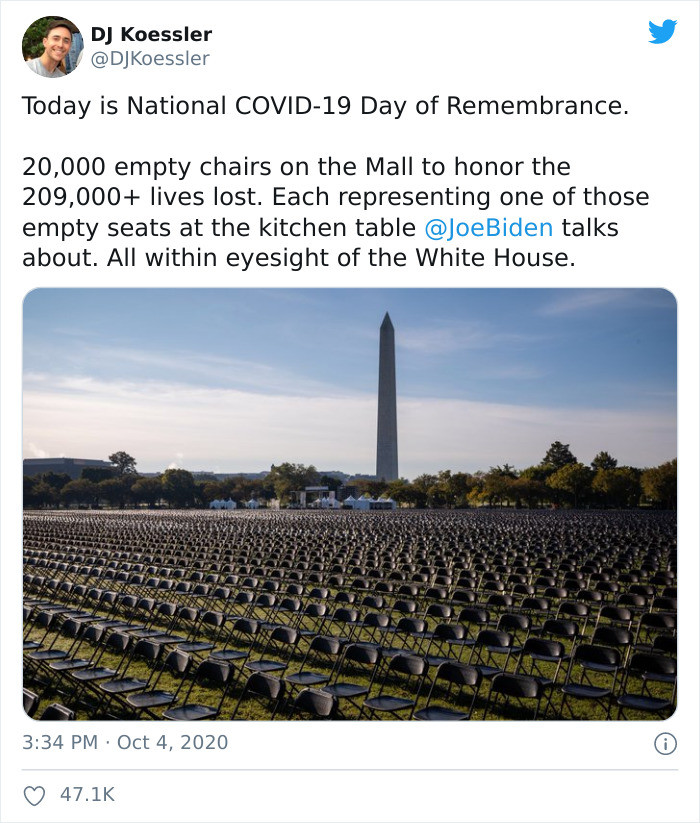 Mia Farrow urged citizens to be afraid of the disease. That doesn't mean cower in fear, y'all, it means protect yourself, your loved ones, and your community members like a life is depending on it because so far over 230,000 lives have been lost. 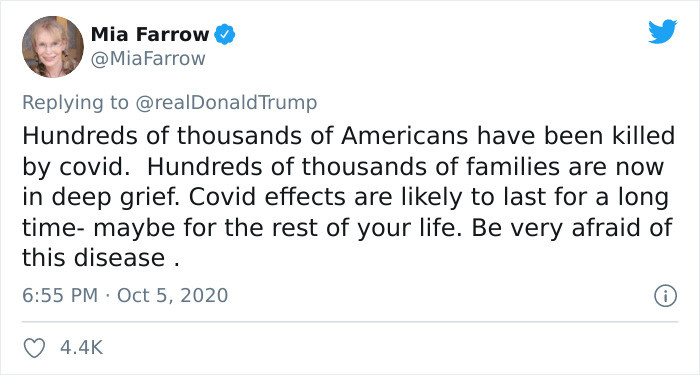 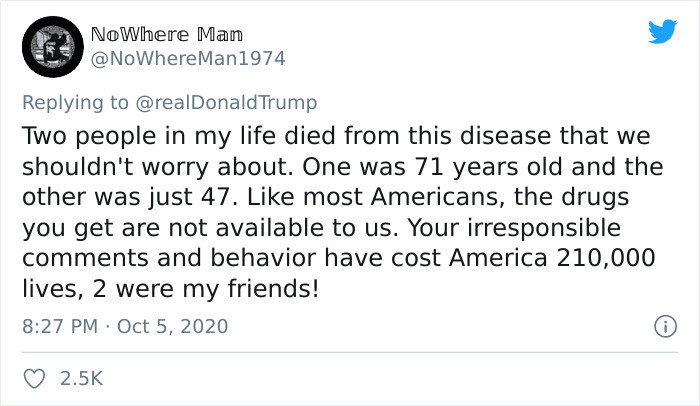 Coping with grief while reading the President tell millions of people not to worry... it's unfair. 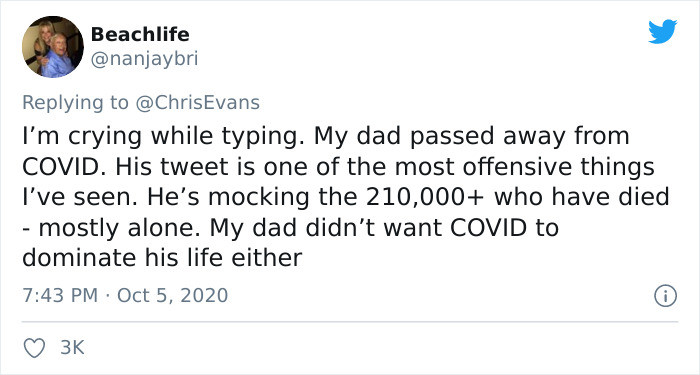 You don't want to catch this virus. 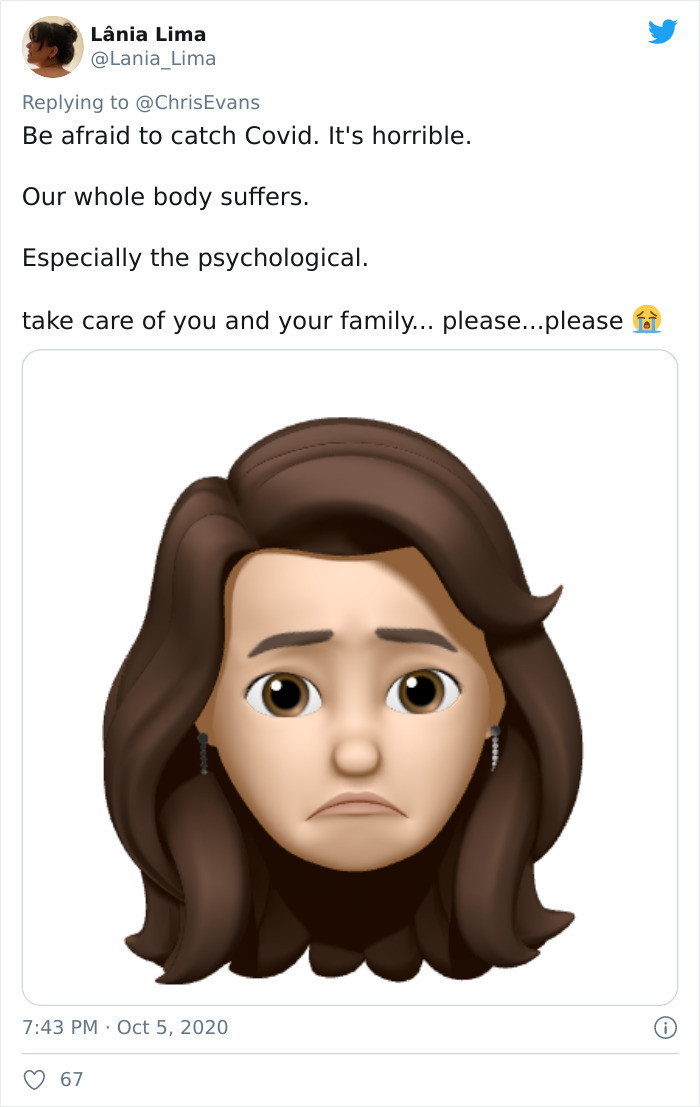 While not every country has totally knocked prevention out of the park, nobody has quite let it consume lives unnecessarily quite like we have. Other countries chime in with perspective. 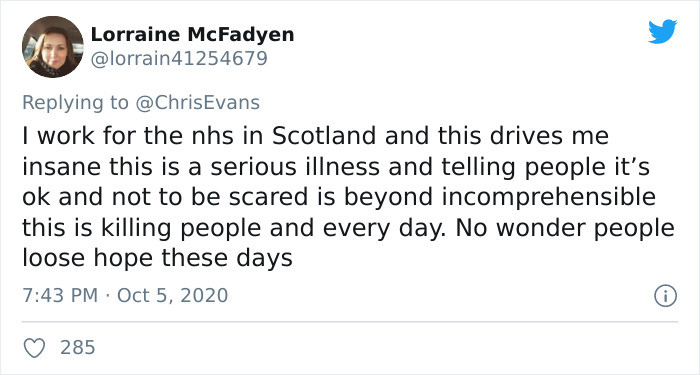 How many people died alone? Too many, Donald Trump. TOO MANY. 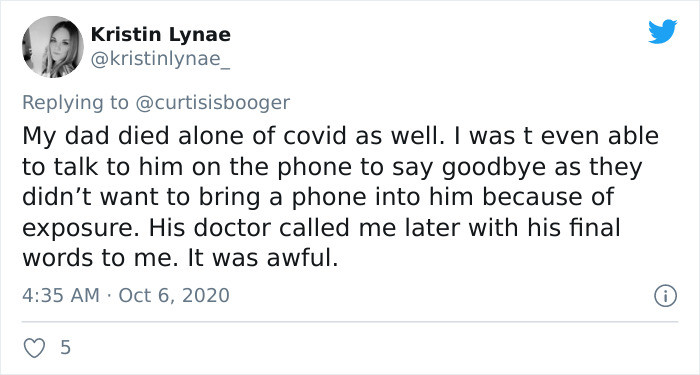 Some people got phone calls and face time, others got nothing to say goodbye.

"Praying for all those affected." 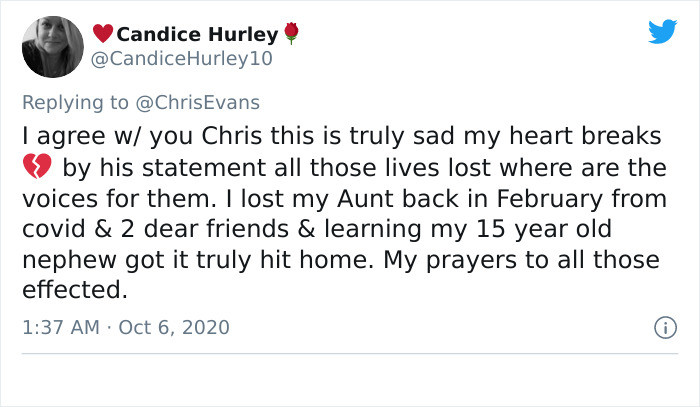 Death is not the only sentence COVID19 is dishing up.

In fact, The New York Times recently shared a story about survivors of COVID-19 experience antibodies that attack the body the same way life-long autoimmune diseases do. 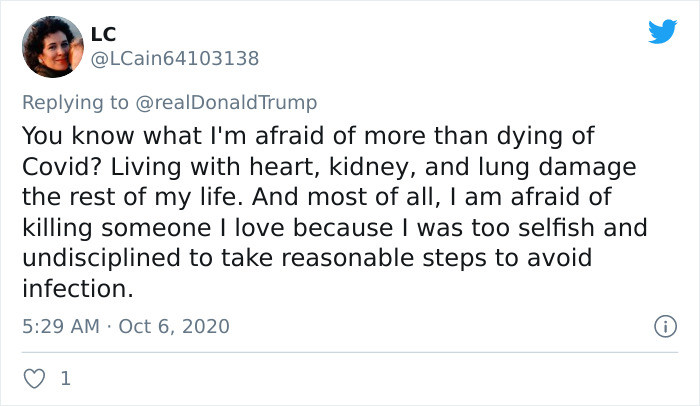 Even people not experiencing COVID19 are hurting because of how chaotic COVID19 has been. 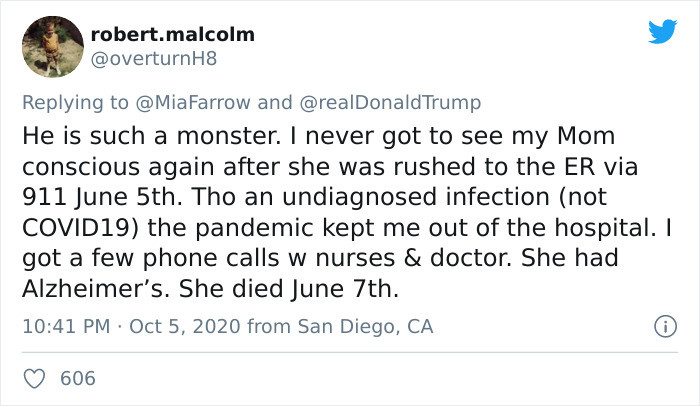 The lingering effects for survivors has felt pretty catastrophic, it's no wonder Chris Evans and so many other people were enraged by Donald Trump's totally careess tweet. 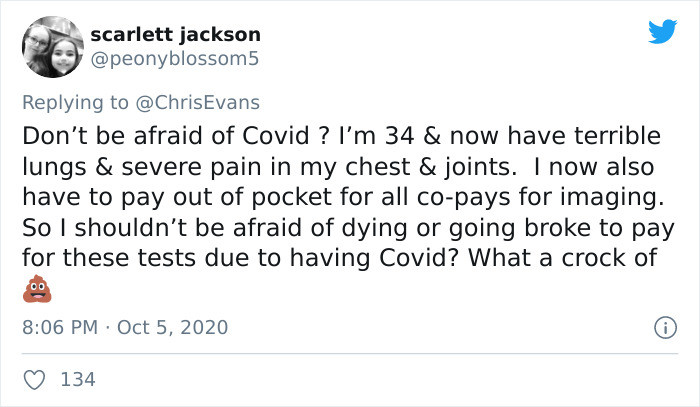