This bad review takes the cake of all the awful reviews out there. This particular customer got so irritated over a t-shirt worn by a Chowder House employee, that he took to the internet with his rage and channeled it into a negative review, titling it, 'an employee's ideology plastered on his shirt.'

The shirt simply read, 'hi. don't be racist. thanks.' With the Black Lives Matter movement in full swing, the fact that someone had an issue with the verbiage of his shirt, really isn't all that surprising, definitely sad, but not surprising.

The anti-racist employee, Bryan, took the negative review to Twitter, after initially seeing it. Clearly he wasn't the only one who couldn't understand the customer's distaste, because his post blew up with over 18.2k retweets, and over 102.1k likes.

The people who showed up on Bryan's thread in support were equally as baffled over the total asinine complaint of nothing, except a t-shirt. But no one considered what would happen next.

The owners decided to take their own stand, and purchased the exact same shirt that was worn by their employee when the negative review came to light. And added them to the business's baskets on their front counter.

The brilliant shirt that ultimately made a difference. 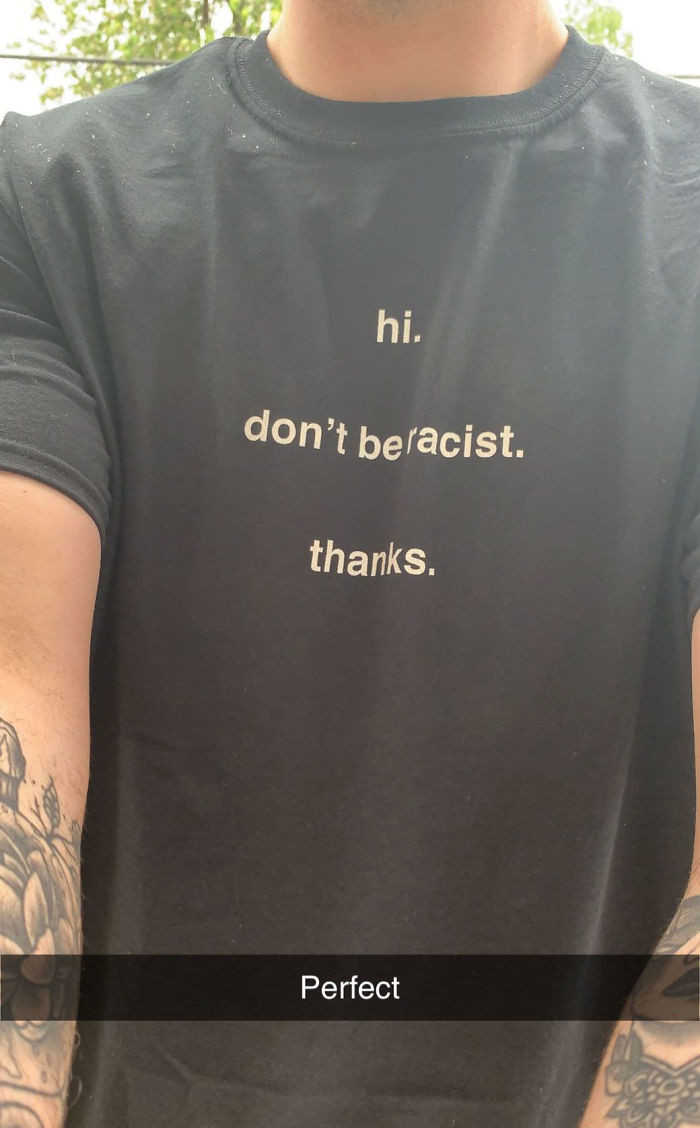 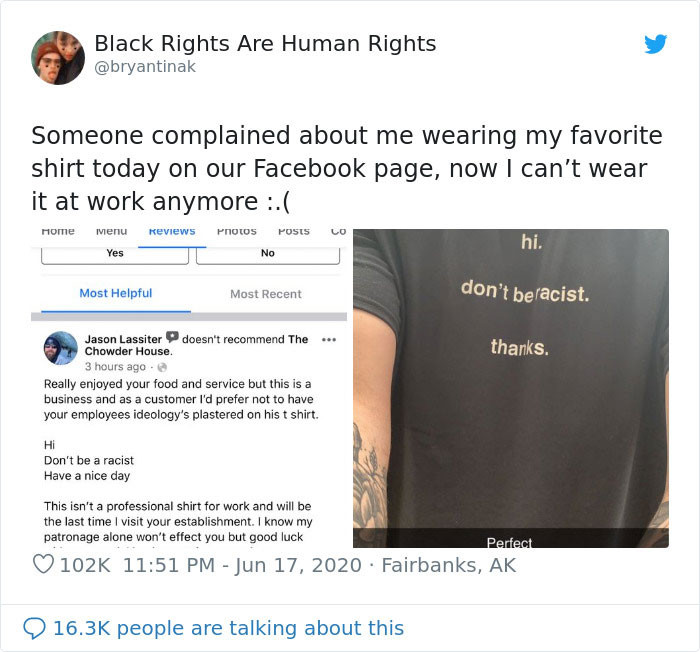 The review that the customer left on social media.

Oh, the ideology. Cue the eyeroll.

So incredible that his bosses reacted the way that they did. It's the kind of support that's needed! 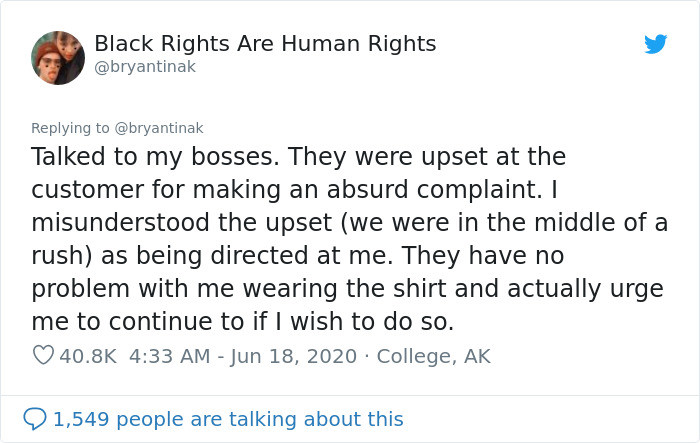 Of course he attempted to retract his review. 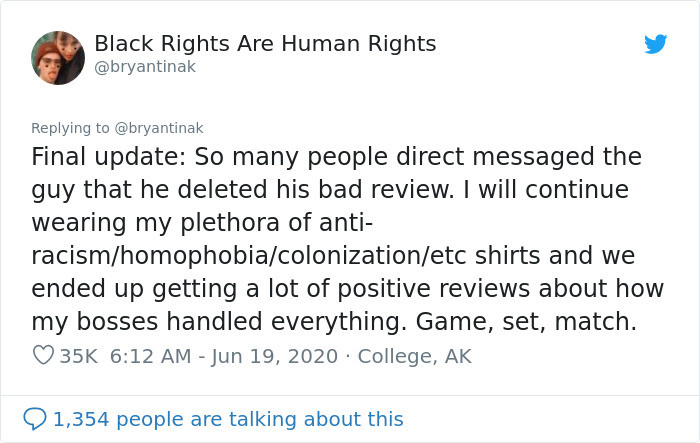 Hands down, the best part of it all. 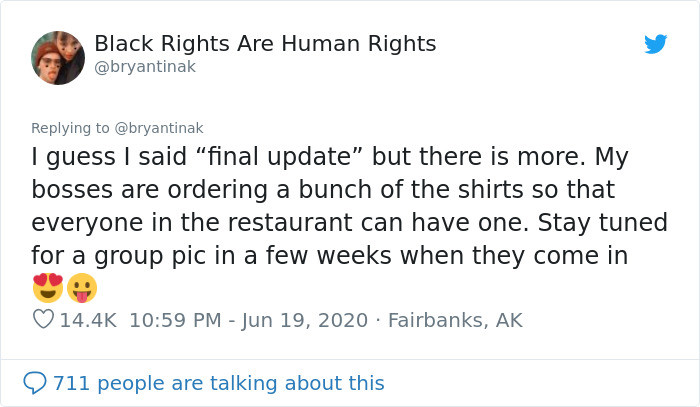 The comments give the whole situation life. 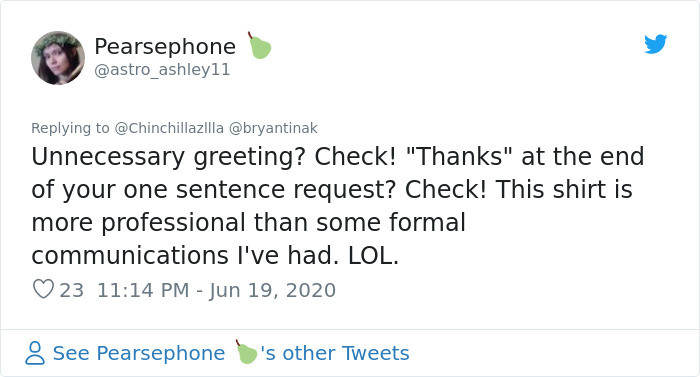 A round of applause goes to you, bud! 👏 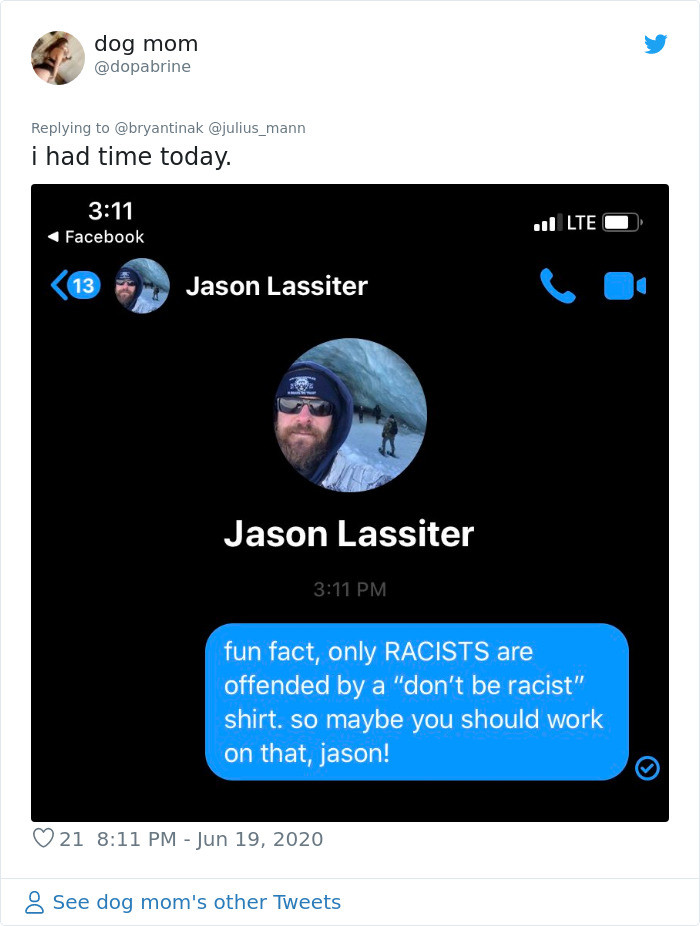 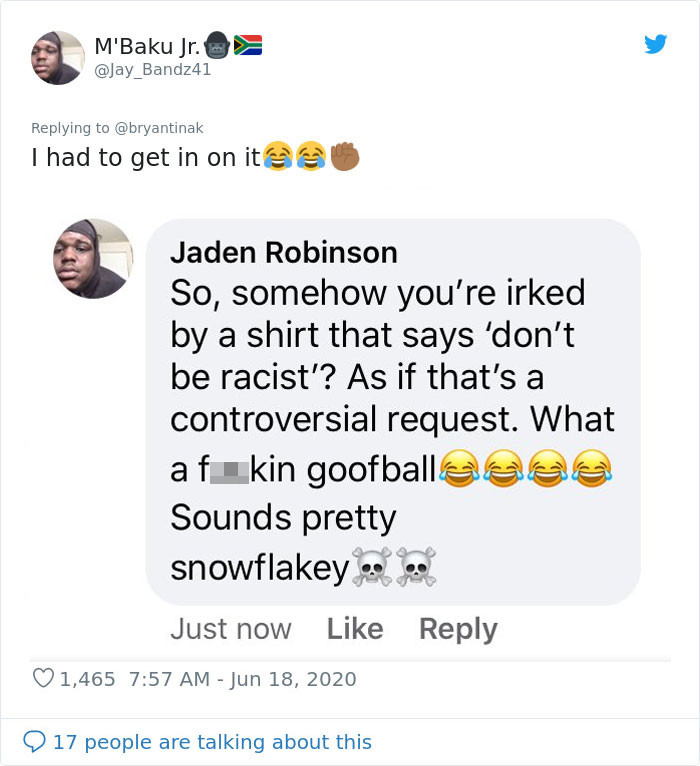 When you know better, do better. Simple logic. 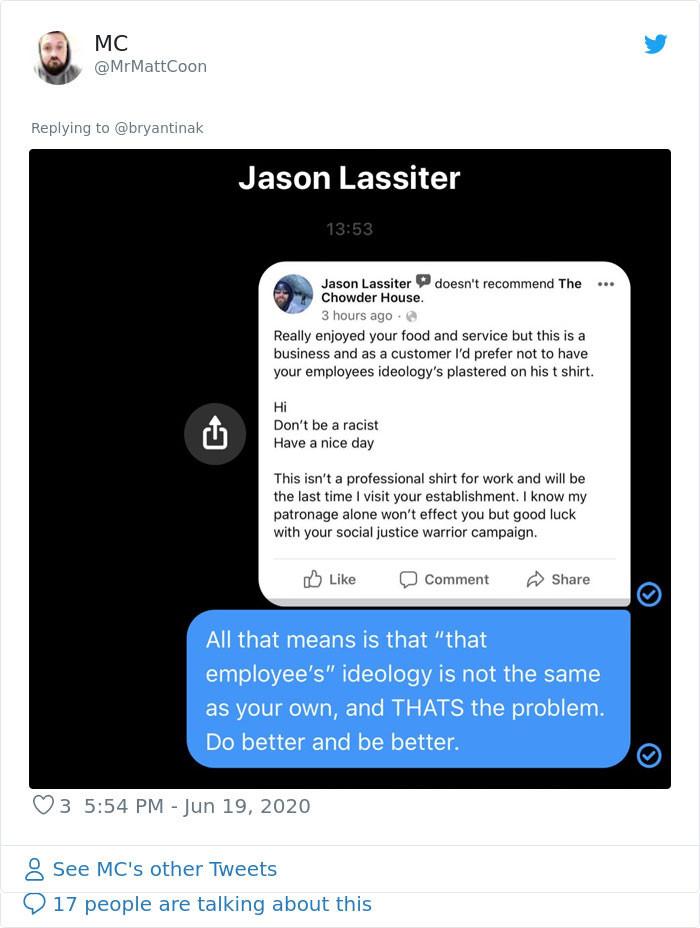 Go ahead and explain it to the class. 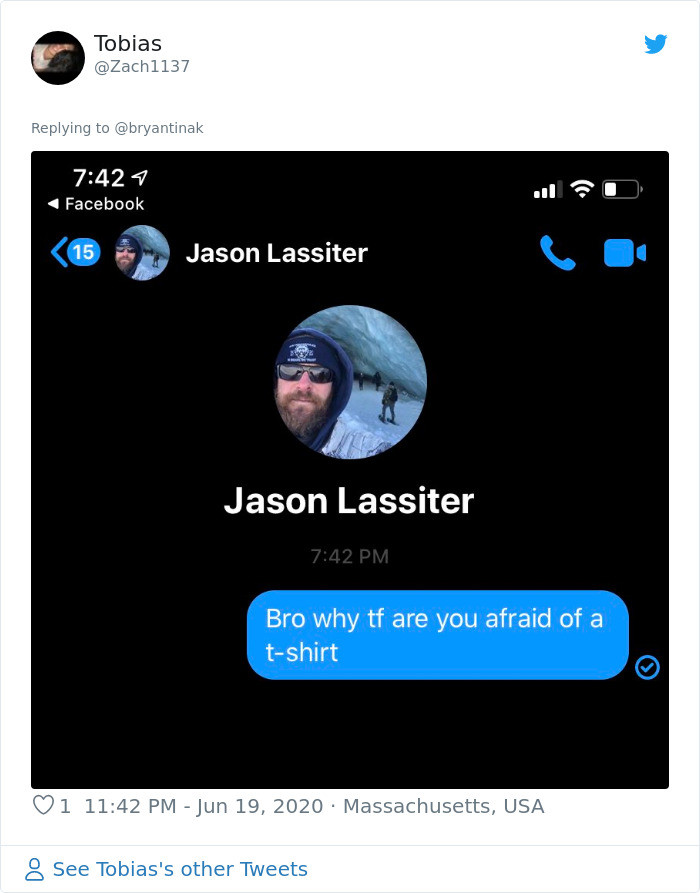 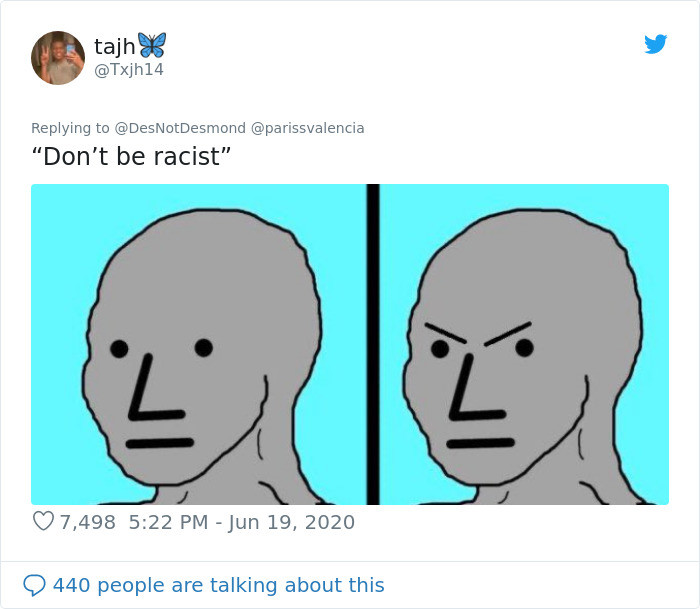 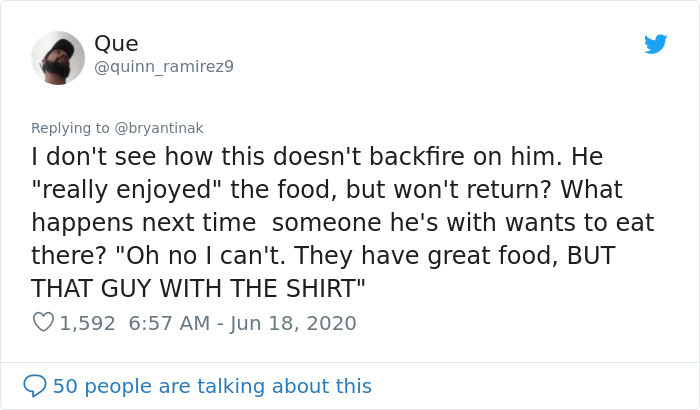 How dare he defend humanity!

Because that makes all the sense, right? UHG. 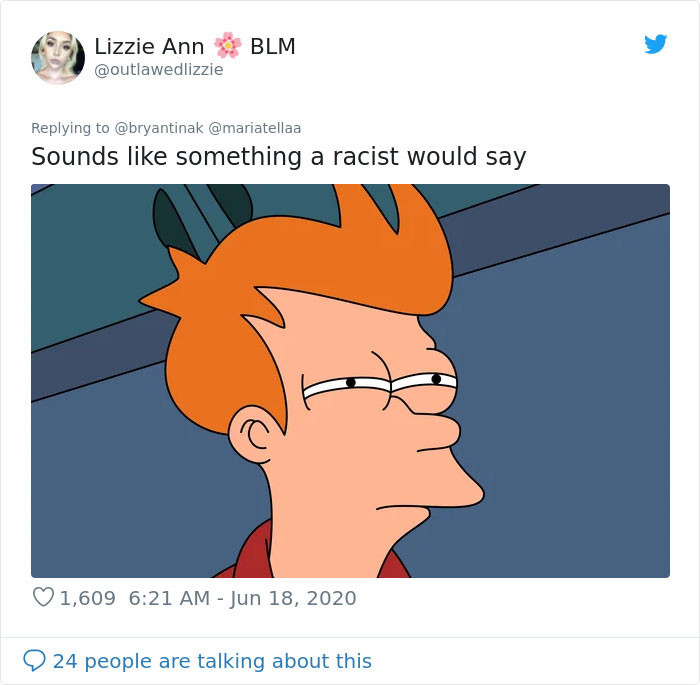 The message is clear none the less.

It's the best possible ending to the story!

Couldn't have said it better.

Moral of the story, don't be racist. Actively be anti-racist. Stir the pot every chance you get. 👇