Black Lab Was Born With A Cleft Lip And Cleft Palate, And After A Successful Surgery He Is Happier Than Ever

Felix is a good dog who had his fair share of misfortune. This black Labrador was born with a split lip and split palate. These severe physical drawbacks did not stop him from being playful and adorable, so he captured the hearts of people on Imgur, where his photos were frequently shared.

Fortunately, at the beginning of the year, Felix had successful surgery to repair his mouth, and now he is happier than ever and, most importantly – healthy as any of his pooch friends. He was even able to swim in the river, something that wasn’t possible a year ago.

Felix was born with a split lip and split palate 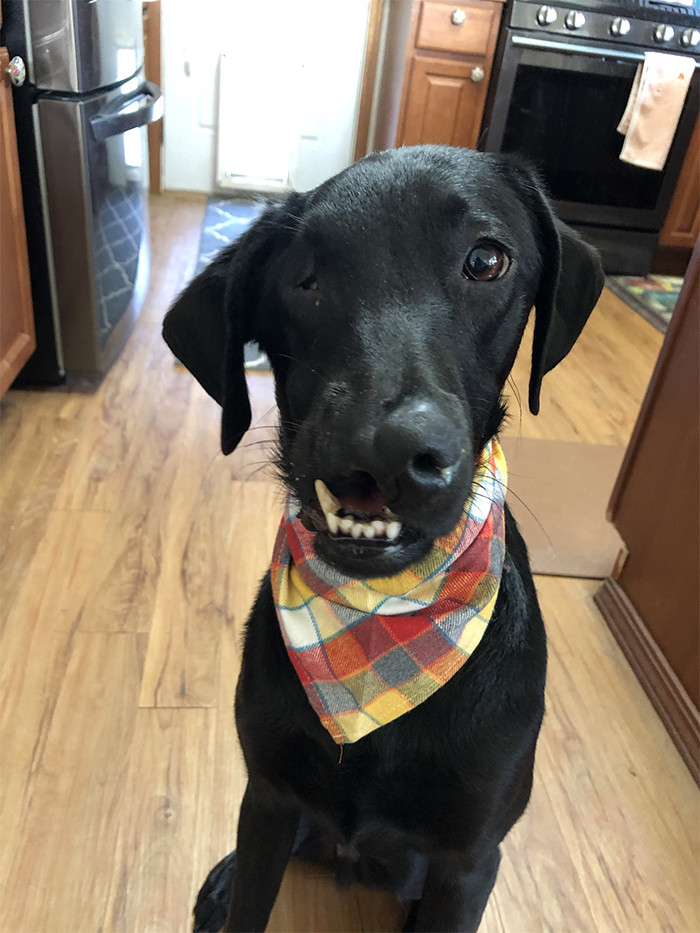 “I got Felix as an 11-day old puppy. I was the rescue worker who was called in by the breeder after they noticed that one of the puppies from their litter was not thriving, and was, in fact, dying because he had a severe cleft palate and cleft lip, and was not able to nurse off of his mother properly,” Jamie, Felix’s savior and the owner recalls. “He had developed aspiration pneumonia at this point and was not going to live another 24 hours. I took him home with me and tube-fed him for the next 7 weeks. I treated his pneumonia as well. He is now a 14-month-old adult Black Lab!”

He finally had surgery and is now better than ever 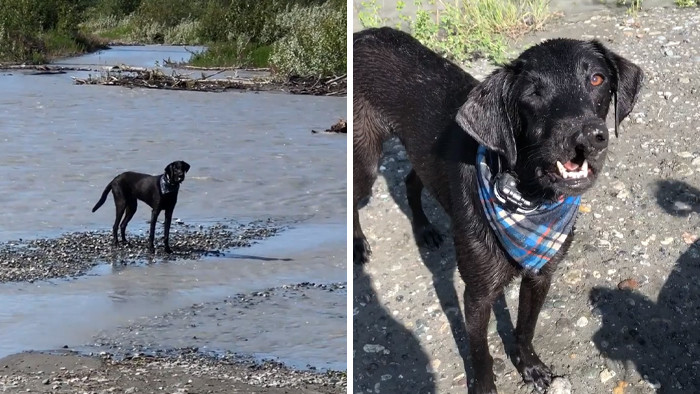 “The cause of a cleft lip and palate is unknown,” Jamie says. ;“It is a congenital defect found in animals and humans, and is thought to be due to improper nutrition in the mother, or exposure to chemicals during gestation.”

“Felix went to the river today for the first time since his surgery for the purpose of getting his face wet!” 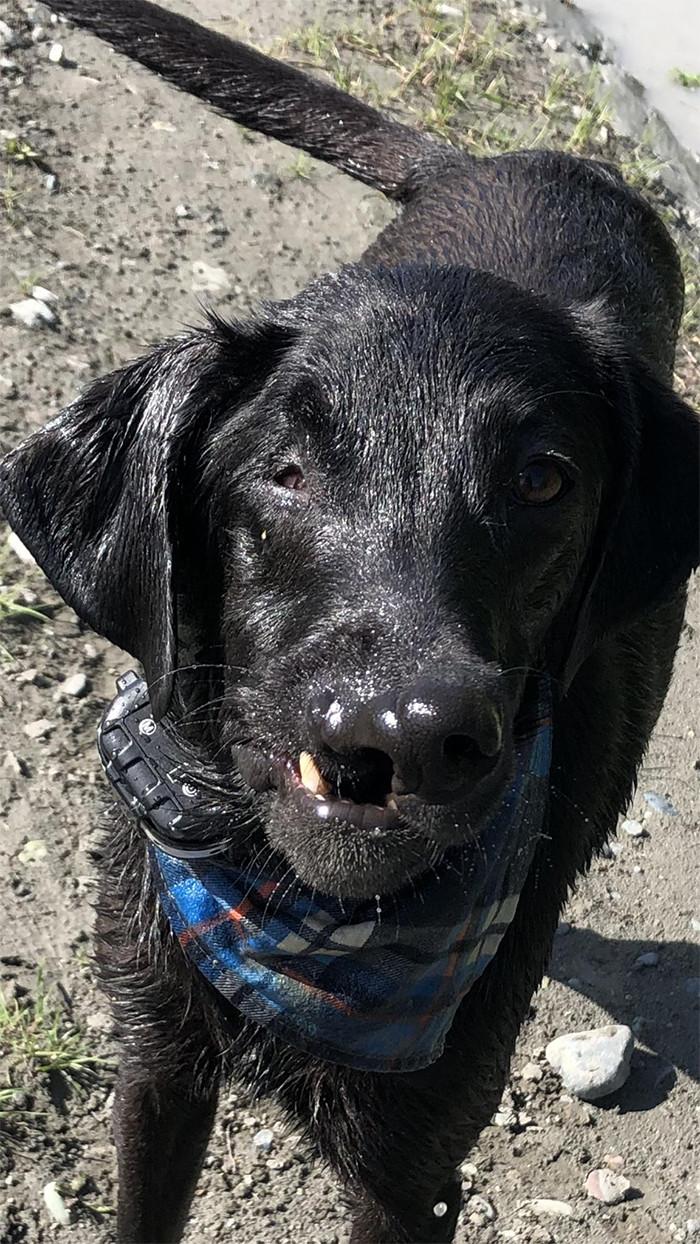 Sadly, the split lip and palate are not the only medical issues that this adorable boy faces. But he doesn’t let that get him down! “Felix also has some digestive issues because his colon formed on the exact opposite side of his body that it was supposed to! Weird but it works. He only has one functioning eyeball, his jaws don’t match up, and the right side of his face looks like a melted candle, but other than that he is ok I suppose,” Felix’s owner says. “None of his teeth match up either, so he has to mostly eat canned food. Sometimes I give him hard food so he can feel like “one of the gang” but it’s kind of hard for him to scoop it up. Keeps him busy though.”

“He had so much fun” 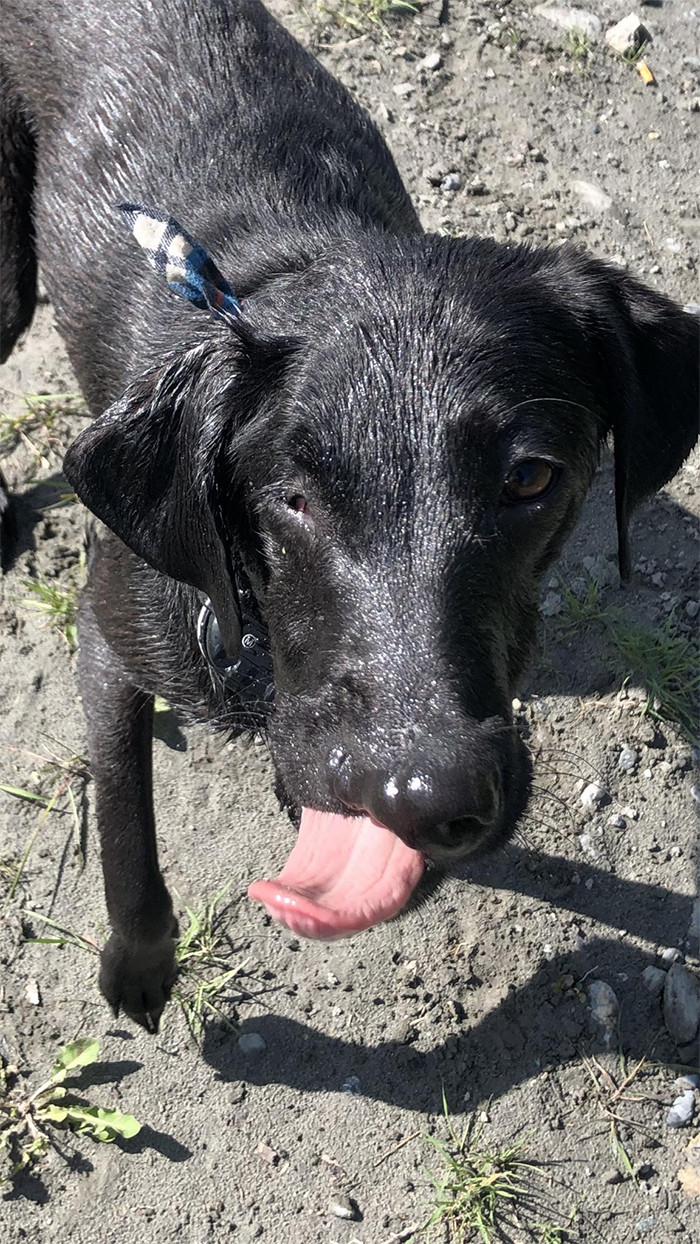 “Felix had corrective surgery on January 31st to correct his clefts,” Jamie, Felix’s says. “He has a unilateral cleft palate that involved both hard and soft palates. His Doctor was able to reconstruct the roof of his mouth using his own tissue, and even rebuilt his soft palate, as it was nonexistent. Ever since his surgery, probably due to his skull shifting, he suffers from a neurological tic now that causes him to spin around and bark at the air occasionally. We are trying new medications to help him out with that.”

“This would not have been possible a year ago” 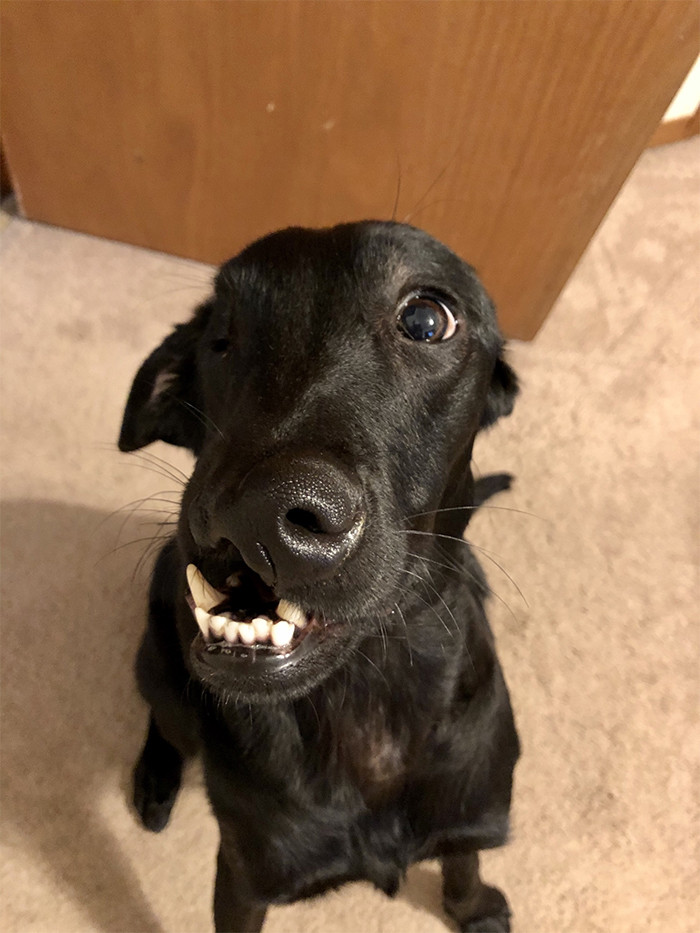 “I had to use a specialized tool that I made to clean the food out of his cleft every time he ate,” she explained. “He also had to be regularly sedated so it could be cleaned and flushed at the vet. One time there was an entire salmon skin up there (we live in Alaska), and another time there was a plastic dental flosser stuck up in there. He was kind of a mess.”

Felix when he was a baby: 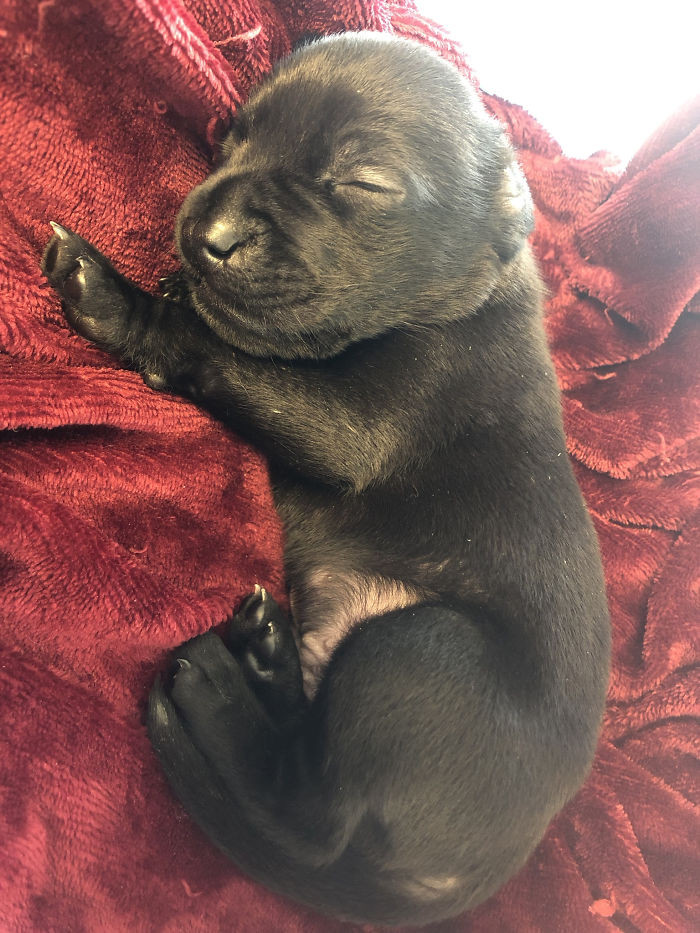 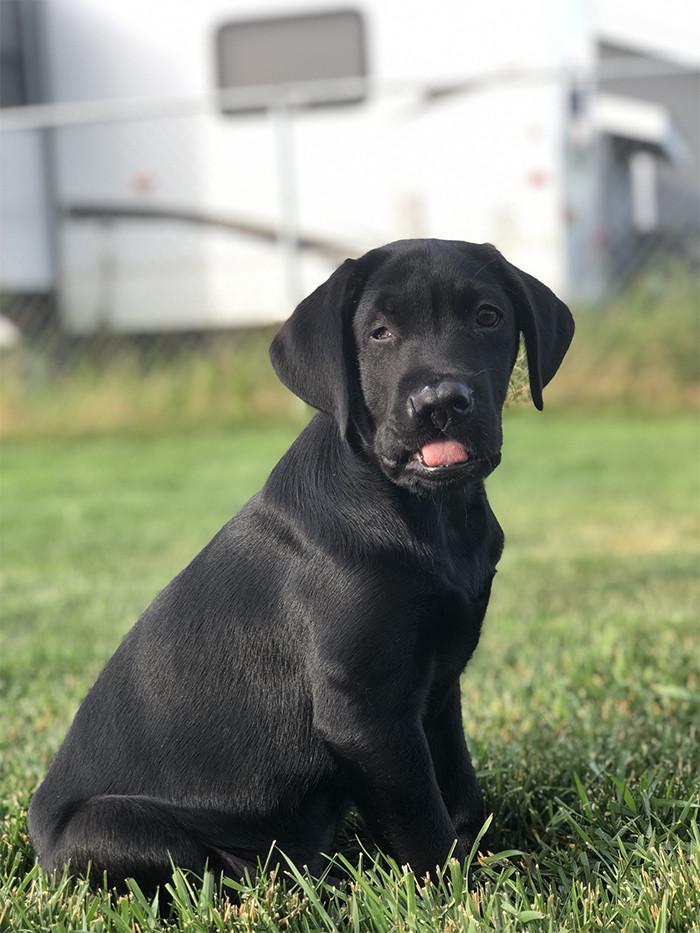 Evidently, Felix is feeling pleased and secure living with his owner and siblings. “Felix is the happiest dog I’ve ever had,” Jamie shared. “He is blissfully ignorant of his health problems, and he has more energy than he or I know what to do with. I was able to take him swimming for the first time in his life this past weekend, and he did great. I hope to be able to train him to be a “real retriever” this summer. If I would have tried to take him swimming before his surgery, he would have drowned in seconds.” 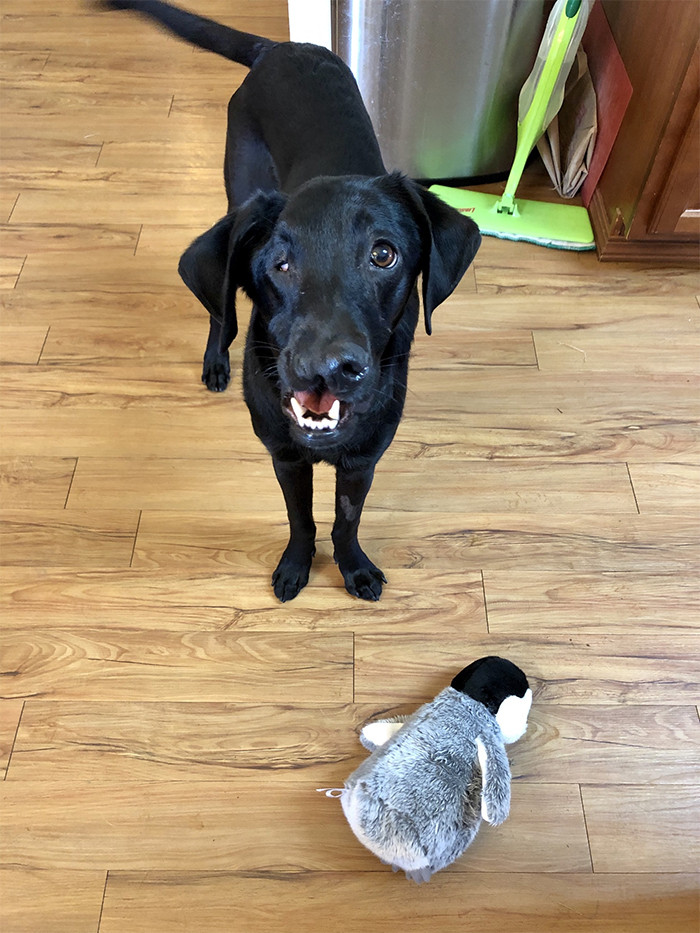 This dog is a bundle of joy! “Felix loves to play ball – he will do it allllll day if you’ll throw it,” his owner says. “He is able to eat and drink normally now, and he’s the strongest dog I’ve ever known. After his surgery, he had a feeding tube coming out of his neck and I had to push liquid dog food through it for a few weeks. He never complained and stood so still while I did it. He couldn’t have anything in his mouth, which was difficult, because he loves to have something in his mouth at all times! He has been a real trooper, and I hope that the rest of his life will be great!” 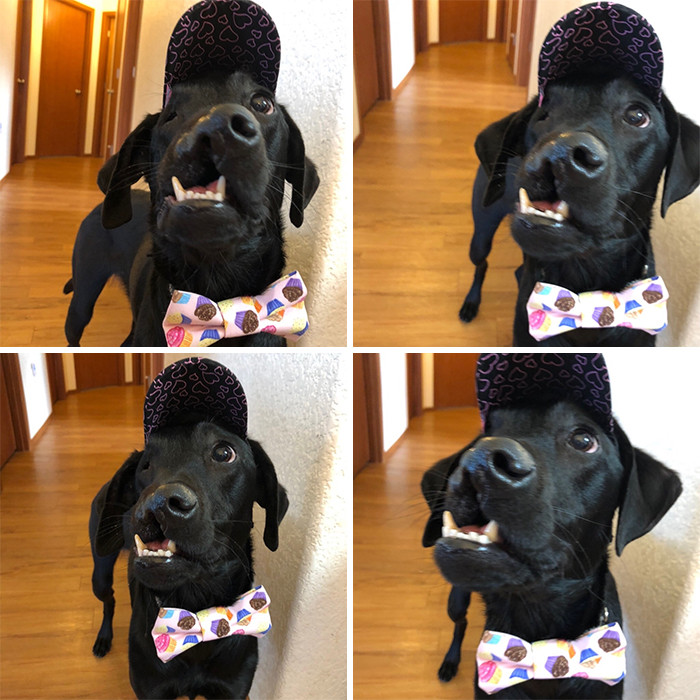 It is clear that Felix is loved in his house. He has company and gets to play with other dogs, cats, and his favorite stuffed toys. In fact, he loves them so much, he ate two of them and had to have an operation! 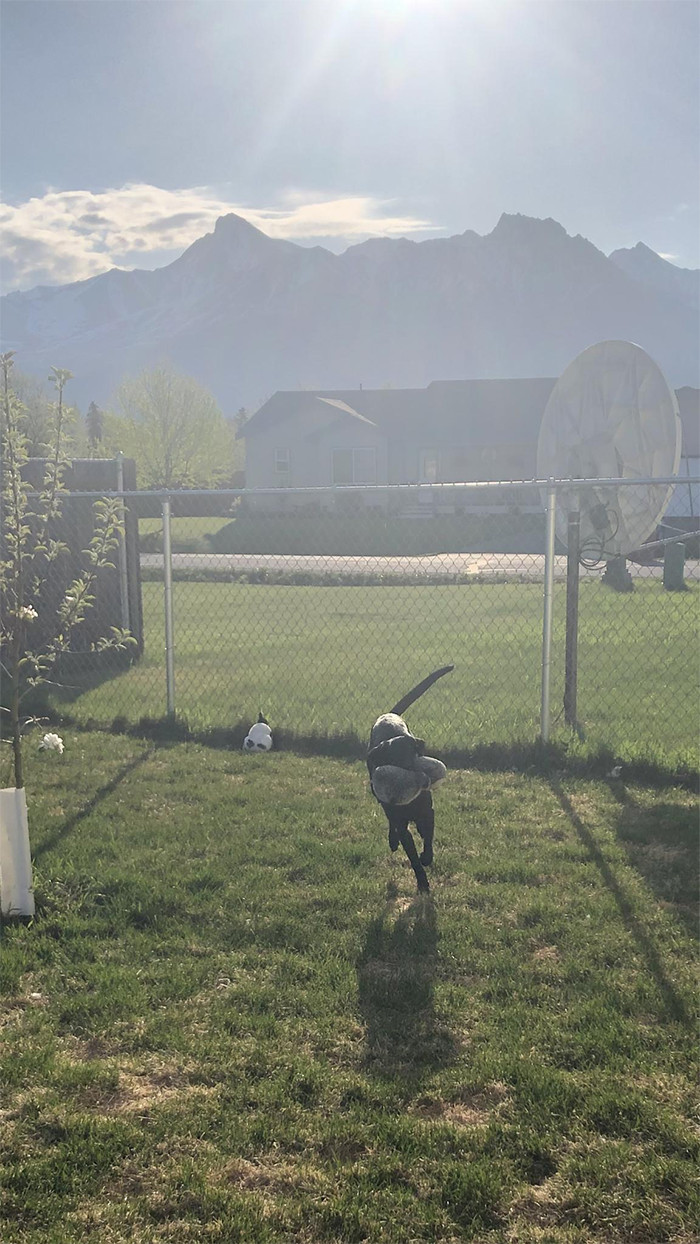 “Seeing him like this after his surgeries is the best reward. What a guy,” Felix’s owner says. “He is a happy boy.” 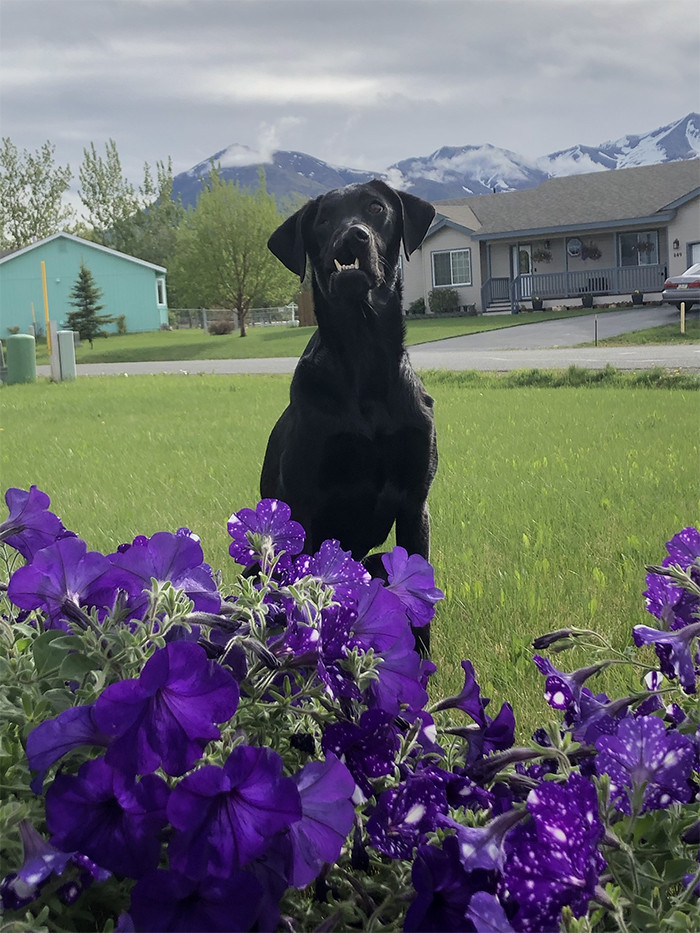 Jamie is happy that Felix is part of her life. “I have had people say that I should have put him down, but I’m glad I didn’t,” she says. “He is a great advocate for overcoming challenges, looking a little bit different than your friends, and for having your pets spayed or neutered!”

“He is a handful!” Jamie says 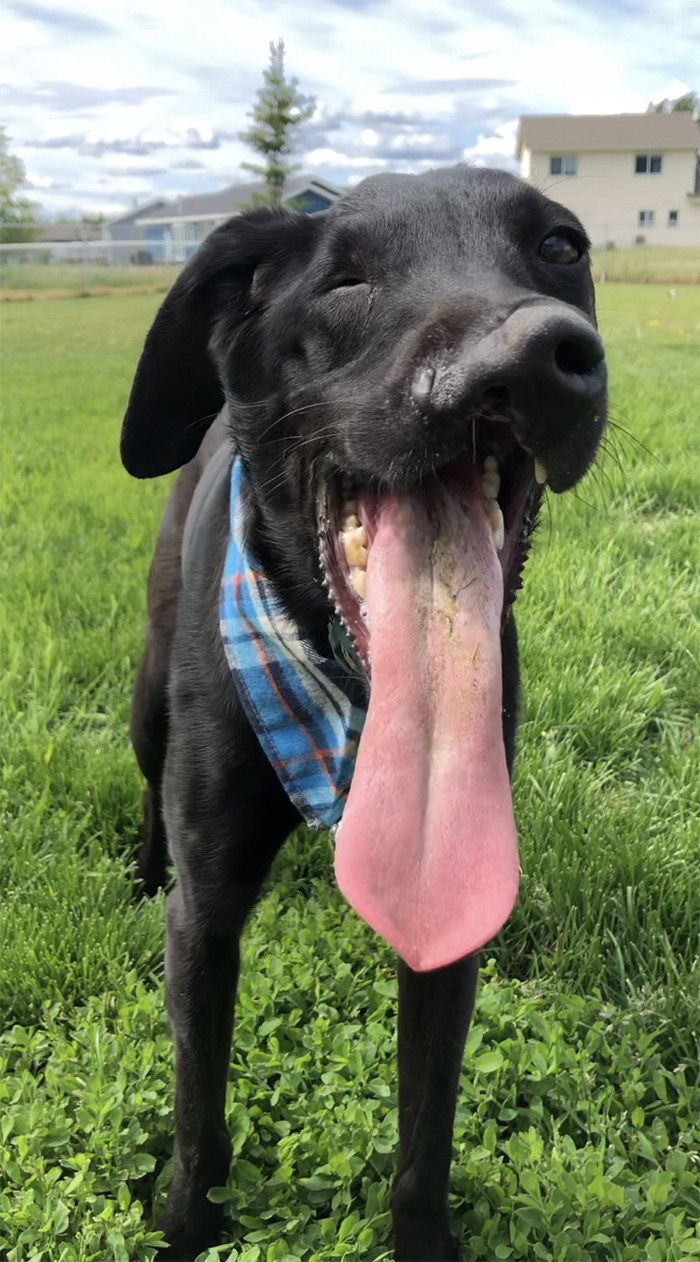