Humans spend quite a lot of time in the water, sometimes out of necessity and sometimes just for fun. There are even several activities and sports that were created just so we can have more reasons to jump into the water and have fun.

Cooling off in cold water is something that is appreciated and done by pretty much everyone worldwide. The weather in some areas can get quite hot so hanging out in a pool is something that a lot of people resolve to in order to cool off.

Animals, however, do not all enjoy spending time in the water, and a perfect example of that is cats, most of them absolutely hate even being touched by water, but some dogs for instance love everything that has to do with water, and they're quite good swimmers. Besides these two, many animals in the wild can often be spotted playing or bathing in the water.

This time, a fun-seeking mother bear and her two adorable cubs decided to spend some quality family time in this Los Angeles County family’s backyard pool. The couple couldn't hold their excitement, especially after their dog Daisy was eager to join the family in the pool, but eventually decided to watch from a distance.

The mother bear and her two cubs were spotted having a blast at this family's backyard pool. 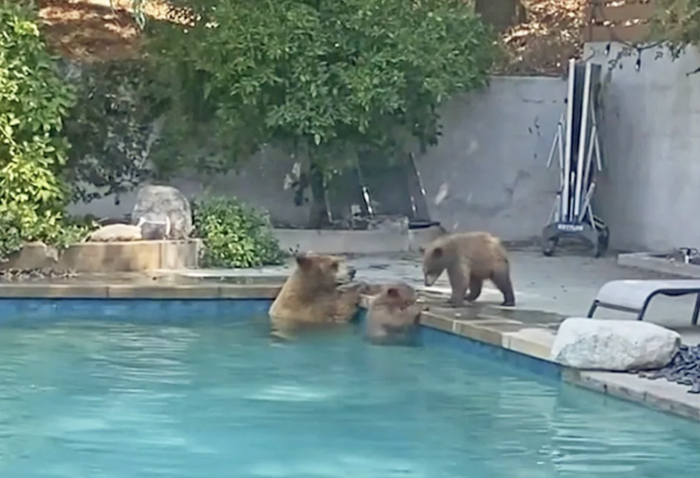 Daisy eventually decided that it was wiser to observe from a safe distance. 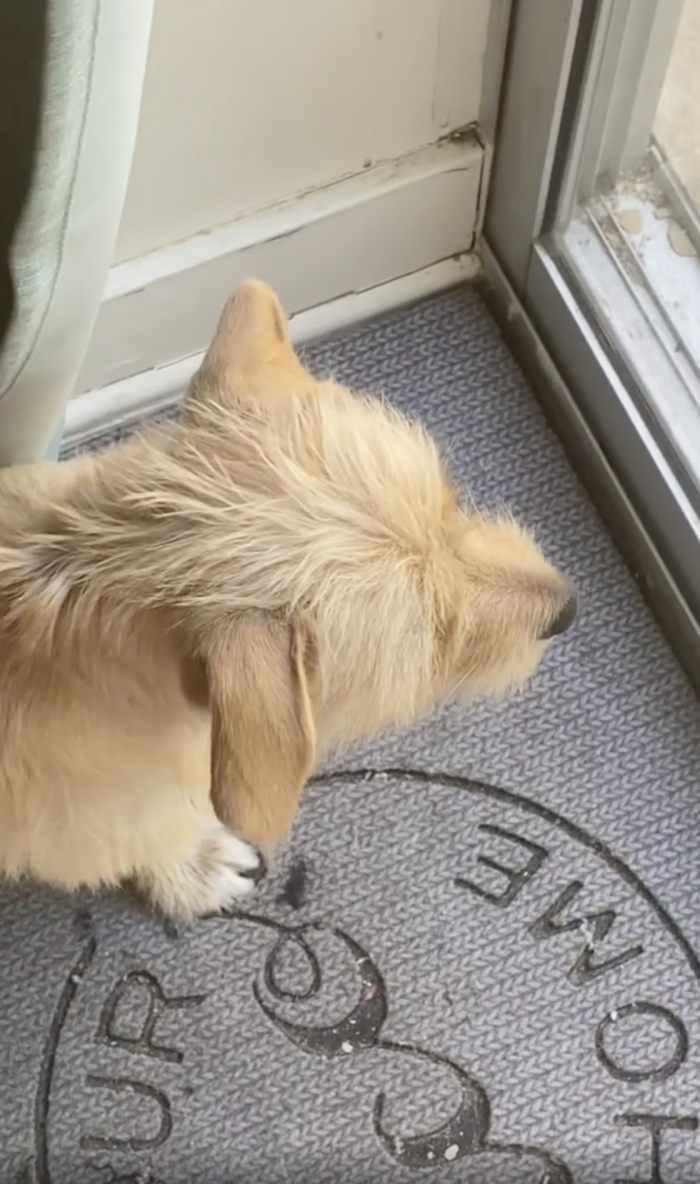 Turns out that this bear family was quite a common sighting in this family's backyard, however, this was the first time they decided to make themselves at home. The Kress family couldn't hold their excitement and their dog was quite eager to join them.

The best part is how casual they were about it, it's definitely not something you see everyday. 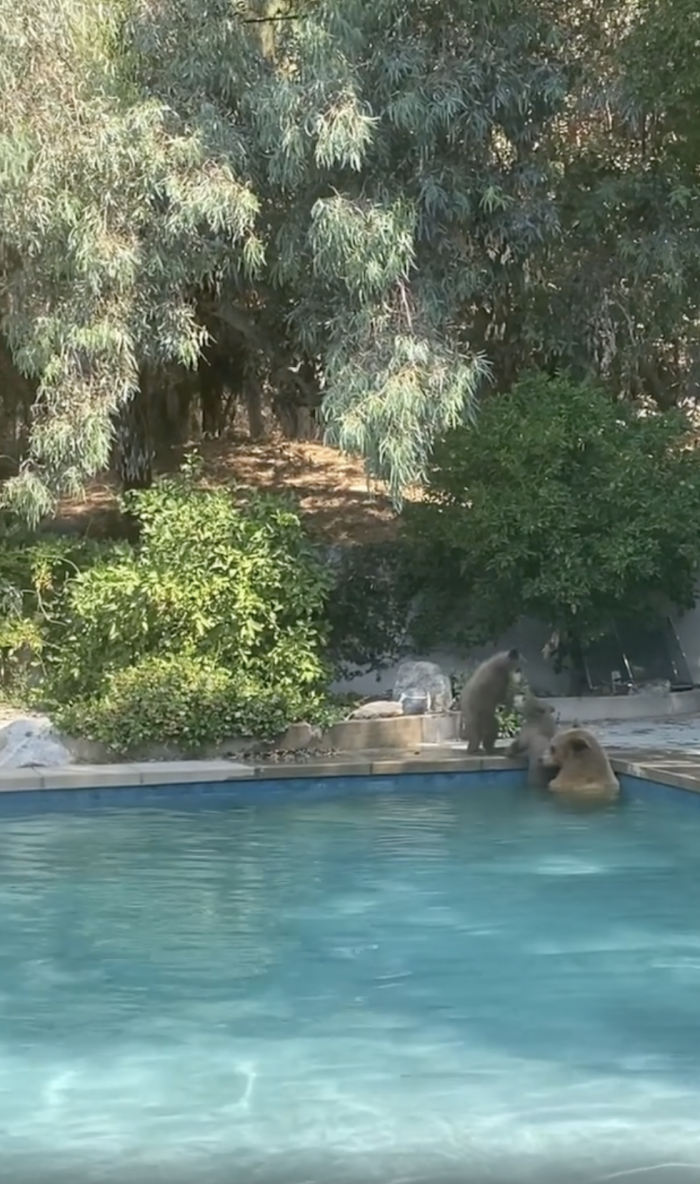 “We see these bears almost every day and often multiple times a day behind our house,” Tiffany wrote on Instagram. “But they finally decided to come over the wall and drop in for a dip in the pool! Our dog Daisy really wanted to go meet the new friends.”

Despite her visible eagerness to join in on the fun, Daisy was not allowed to act upon her natural friendliness. 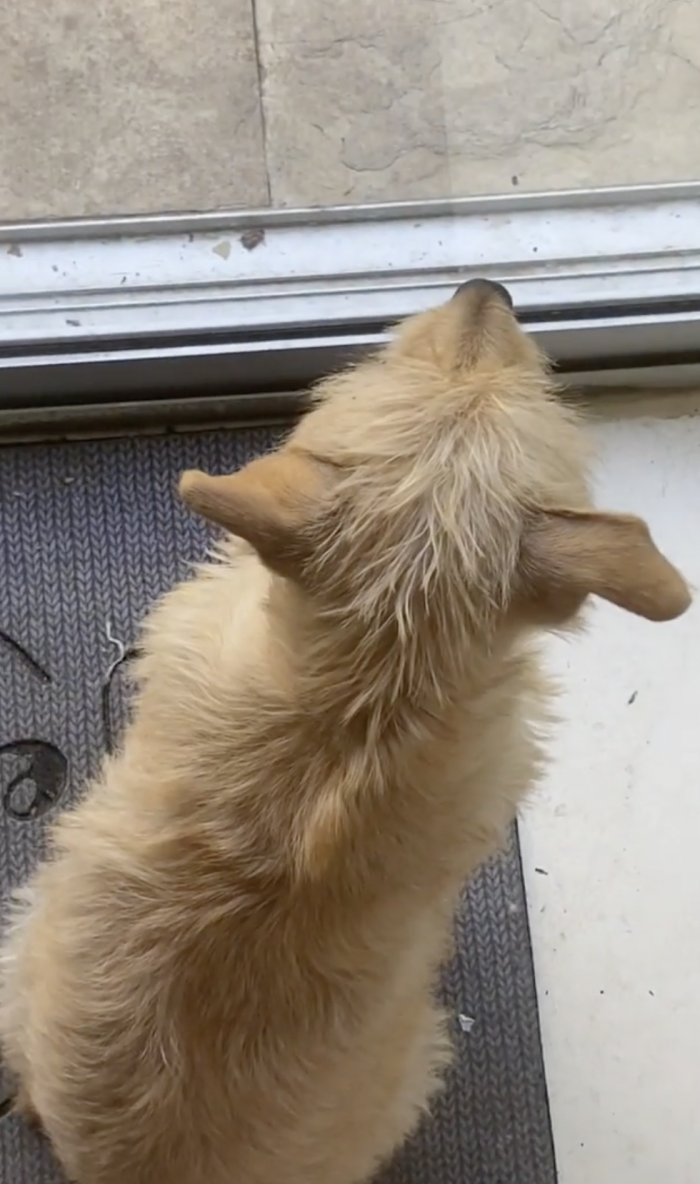 As Daisy was so eager to go outside and meet her neighbors, her parents decided it’s better for her to remain inside.

Daisy initially was eager to hang out with the family, but her parents decided that she was better off watching from the inside. Tiffany is heard saying in the video: "I don’t think she can go out right now,”

The whole family watched and recorded the family safely behind the windows.

This is the original post showing the mother bear and her cubs having fun at the pool:

It's always exciting when nature starts interacting with the modern world. Wild animals often have no idea how to deal with several aspects of the modern world, so they're often confused and lost whenever they find themselves forced to navigate throughout our steel jungle.