Writer and activist Rayne Fisher-Quann recently stumbled across a tweet with a photo we've all probably seen 100 times. It features an overweight couple, outdoors, in denim shorts, white t-shirts tucked in and the image cropped so we cannot see their faces.

The tweet Fisher-Quann originally found mocked the people's weight and fashion choices with over 100,000 likes! Fisher-Quann lamented that she couldn't believe how harsh people were being and that if a popular model like Bella or Gigi Hadid wore this exact outfit, people would praise it and call it '80s inspired inspo'.

So why are we like this? As a society, why do we praise the outfit on someone skinny, but recoil when they same thing is worn by someone we deem 'fat'?

Check out Fisher-Quann's chain on tweets on the topic below.

a tweet making fun of these women has 100k likes but i swear to god if bella hadid wore this exact outfit it would be on a million "80s casual inspo ❤️" pinterest boards bc, as always, fashion is judged exclusively by the bodies that wear it pic.twitter.com/eBZ6P3Zrmh

Fisher-Quann was correct. Other Twitter users shared a photo of one of the Hadid sisters in the exact same outfit, explaining it had garnered A LOT of positive attention. 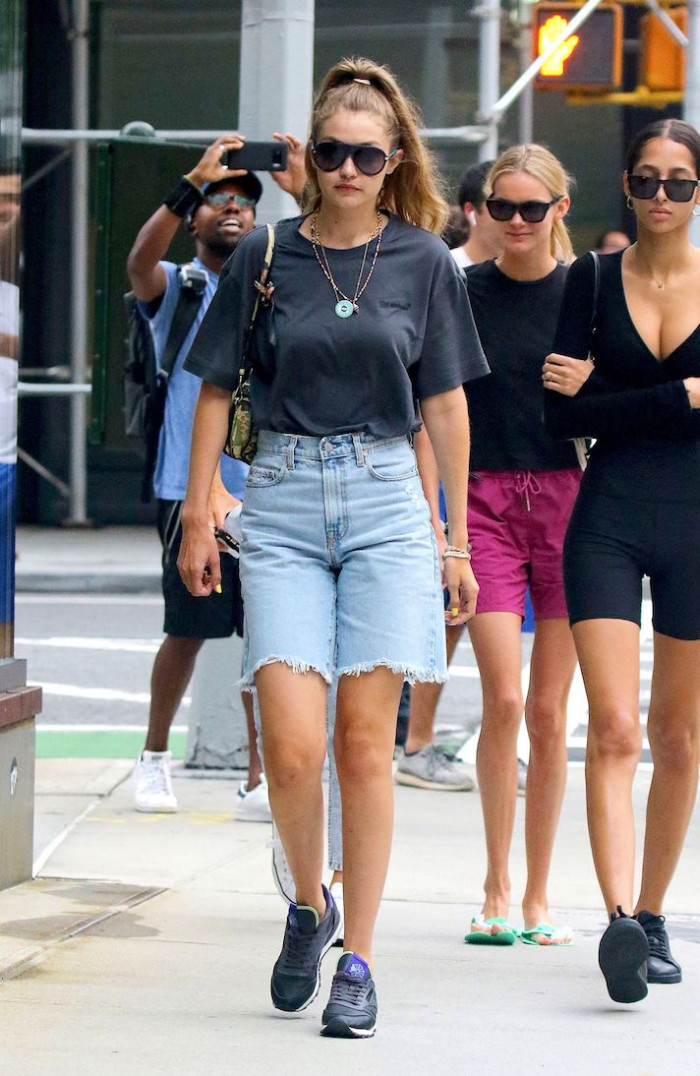 you don’t gotta imagine that far. people were praising princess diana for a similar style aesthetic. and she is obv one of many.

the problem was never the style or the outfits, the problem is people’s incessant belief that fat bodies shouldn’t exist. https://t.co/sSv3mwDSr0https://t.co/Ac26Y9hJP4

Fisher-Quann went on the talk about the double standard in the aesthetics of class.

this ties into the point i make often about the aesthetics of class — as beauty and thinness are increasingly only available to the rich, we've begun to code the aesthetic side effects of poverty as indicating evil, ignorance, sloth, poor taste, etc.

the last thing i will add is please stop fucking replying to this saying fat people shouldn't tuck their shirts in, it's gross, we don't police fashion based on the bodies that wear it, literally everybody looks good with their shirt tucked in, shut up

bruh people commenting “but they should loose weight” is like saying they deserve to be treated badly because they are overweight. this isn’t about them needing to loose weight, this is about the fact that bigger people are treated bad. skinny/pretty privilege is real lol.

Some with body-positive comments

I just hope they’re having a really fun summer day!

Others with personal experiences.

Bullying never goes away w/ these people. As a fat person, not only am I thankful for Walmart havin cute large size clothing, its also the gd pricing!

Even if I HAD the money I do not see the logic in payin 80+dollars for a pair of large bodied shorts when I can get them for 10!

Fisher-Quann went on to even ask people not to bully the original tweeter as hate doesn't help solve these deep-rooted societal issues.

ik this has mostly blown over by now but please stop harassing the person who tweeted the original post. nobody deserves four days of death threats for making a mistake that blew up on twitter. this post was calling out a larger culture, and abusing one person changes nothing.