One of the ways that humans show affection is through kisses. Indeed we want to show our cats that we love them by kissing them.

But what if you live with a friend who wants you to stop doing it because he's a germaphobe? This is what a female cat owner has experienced with her best friend who's also her roommate.

Her male best friend has signs of autism but has yet to confirm it with a professional. Unfortunately, things worsened when the two friends over how the cat owner kisses her own pet.

Things went downhill for these roommates because the best friend, who also wants to kiss the feline, is too afraid that her saliva might mix with him when he kisses the cat.

But is it fair that the best friend acts this way when he doesn't own the cat? Who's at fault here?

The pet owner wants to know, so she consulted the peeps over at the subreddit "Am I the a**hole?" Since people with autism have brains that work differently (and the pet owner understands that) she wanted to know if she was wrong to not accommodate her best friend's wishes.

So what's Reddit's reaction on this matter? Let's find out.

A female cat owner is asking the AITA subreddit if she's the a**hole. 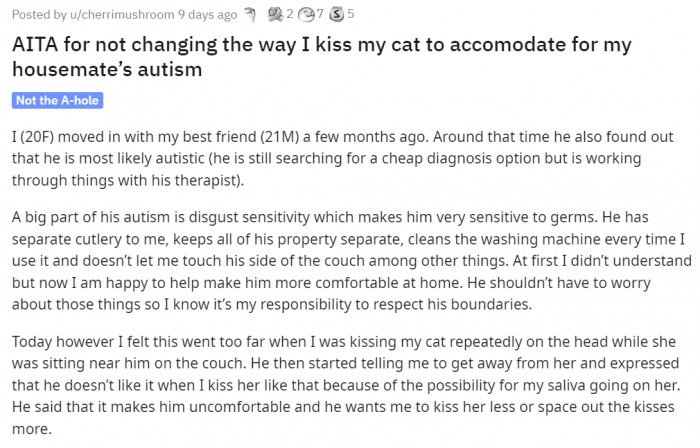 Her best friend is complaining about how she kisses her own cat. 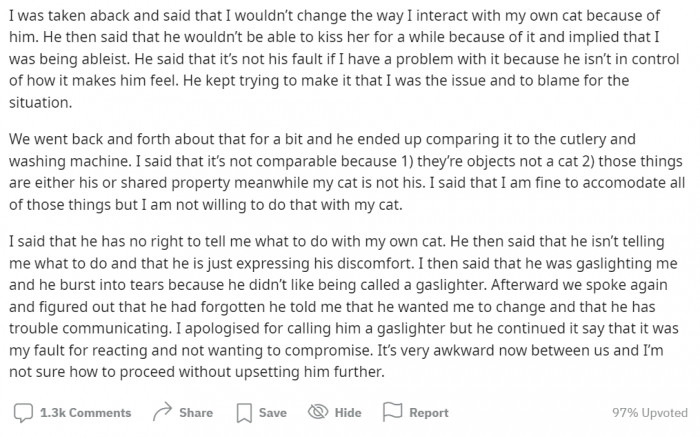 People think the best friend is weaponizing his autism. 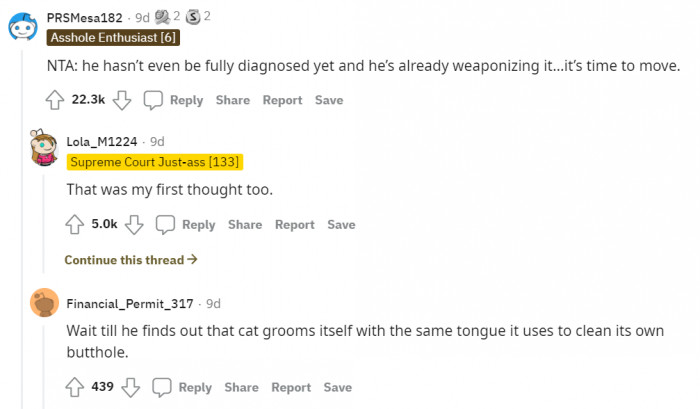 The ball is in the best friend's court for these redditors. 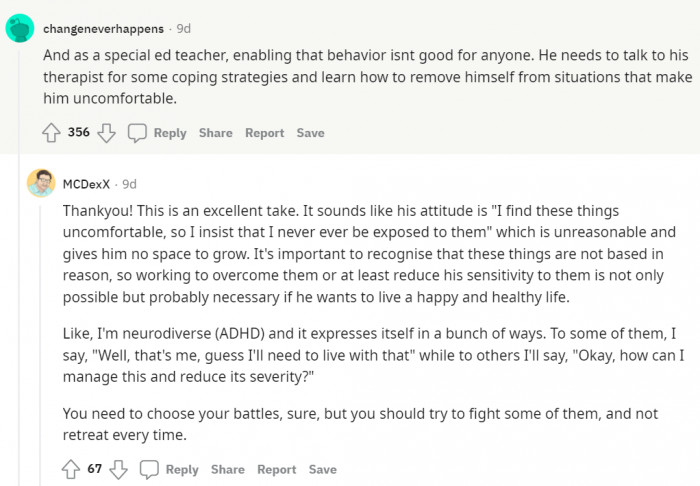 This user is also on the pet owner's side.

With or without autism, everyone is responsible for their actions.

It's the responsibility of the best friend to find a way to cope with the situation. He's being unreasonable according to more redditors.

Other users agree that the best friend is being abusive at this point. 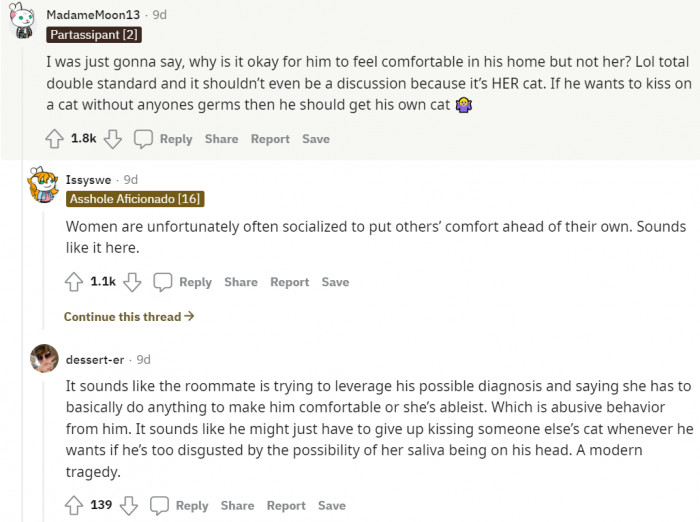 This user thinks that the best friend is using the autism to control the original poster.

The best friend should be the one adjusting to the situation, according to these users. 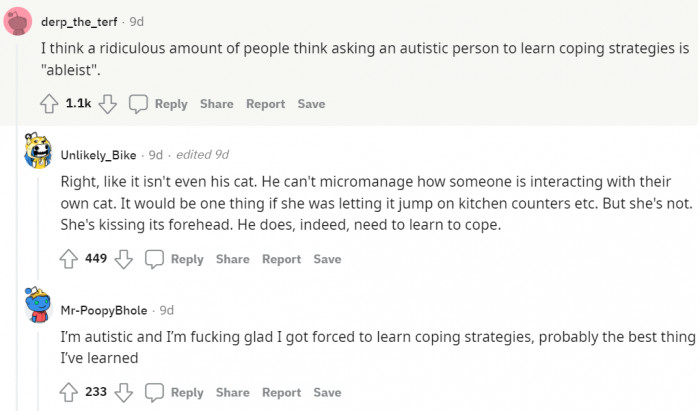 This user smells something fishy because the germaphobe friend still manages to kiss the cat.

More users are getting suspicious of the best friend.

The original poster explains the nature of her friend's germaphobia.

This will easily solve the problem, won't it?

Why is he owning her cat anyway. These users are right to suggest that he should get his own.

As the cat owner defends her friend, more people are becoming suspicious of his behavior. 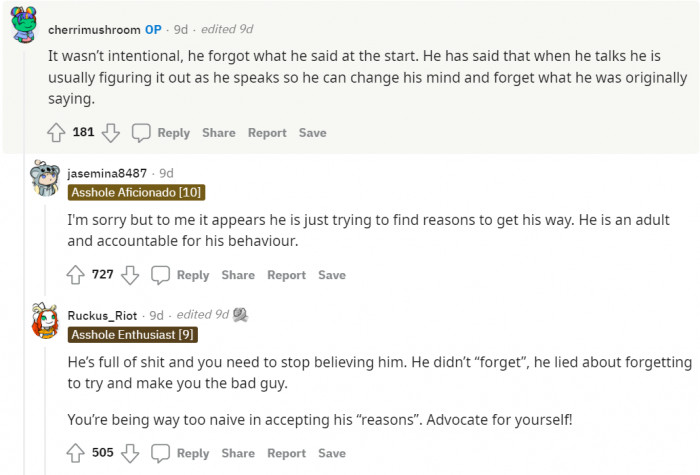 Other users agree that he is indeed a gaslighter. 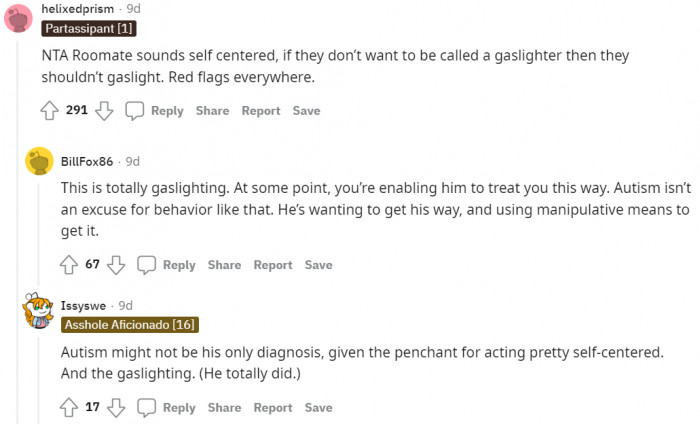 The perfect suggestion for someone who has a roommate with red flags everywhere.

At this point, nobody is on the best friend's side.

For this user, developmental disabilities are not an excuse for bad attitudes. 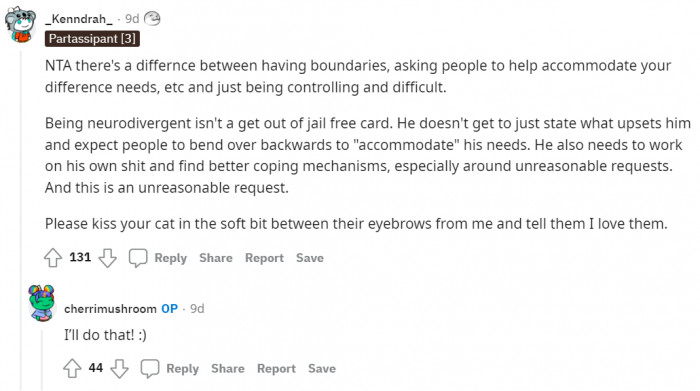 The verdict: She is not the a**hole.

The cat is hers, after all. So, she has every right to decide how she wants to show affection for her cat.

Sometimes, even the closest people in your life aren't the best roommates. When you live with someone, it's inevitable to see them in a new light.

What's more, since there's a lot of time together, the tendency is to witness the friend's bad habits and quirks. This can eventually lead to an argument.

Perhaps it's time for the original poster to move it. This might only be the way to save their friendship.