Thursday morning in Miami, Florida a 12-story residential building collapsed. As of Friday four people were confirmed dead in the tragedy and even more staggering... 159 people are unaccounted for.

Rescue workers are painstakingly coursing through debris and rubble, desperately searching for survivors in light of the tragic and entirely unexpected collapse. It happened around 1:30AM, resulting in 55 of the 136 units at Champlain Towers South collapsing.

The community, if not the entire state is in shock, while experts try to weigh in on what happened and why. With so many innocent people still missing, it's hard to focus on the facts.

On Thursday, early reports were scattered. 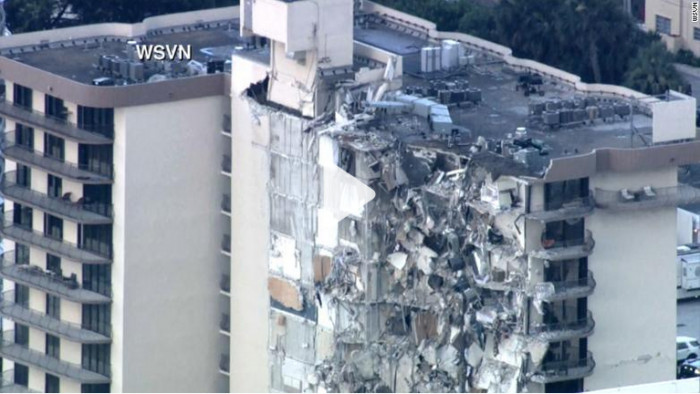 On Thursday, Miami-Dade Police spokesperson Alvaro Zabaleta originally reported 99 people were unaccounted for, and Miami-Dade Fire Rescue Assistant Chief Ray Jadallah said two people were pulled from the rubble and ruins... while Miami-Dade County Mayor Daniella Levine Cava said that one person had died in the tragedy. She also said on Thursday 102 people have been accounted for but the numbers were already looking different and more difficult Friday morning. 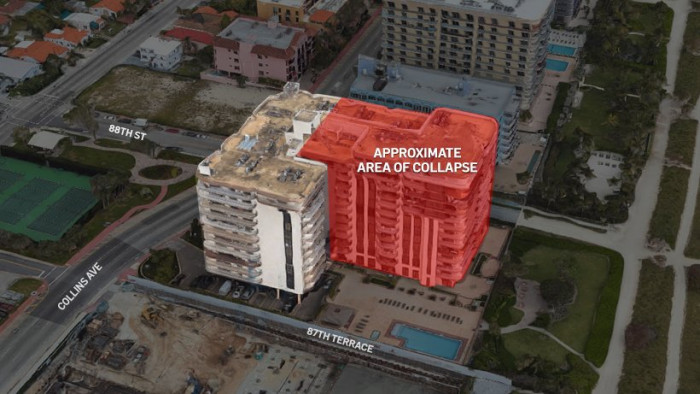 "Three bodies were found overnight from Thursday into Friday in the wreckage of Champlain Towers South in Surfside."

This brought the confirmed death toll up to 4. 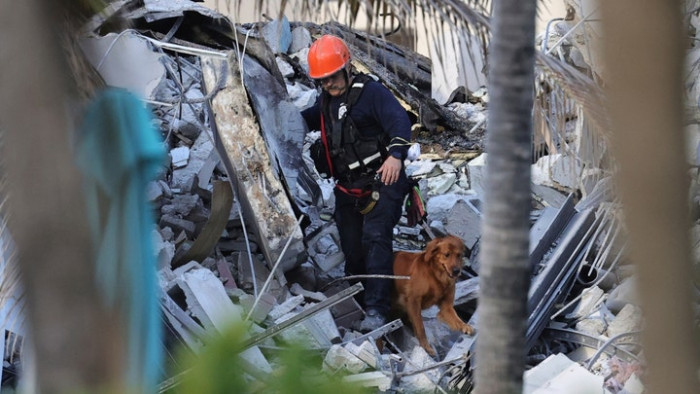 "The number of people unaccounted for is now 159.

We will continue search and rescue, because we still have hope we will find people alive." 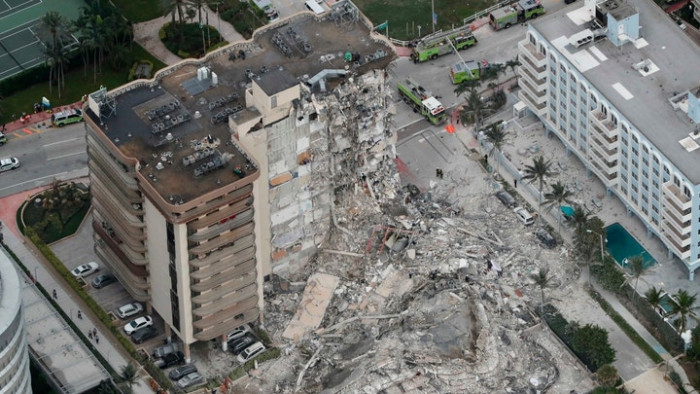 On Thursday, witnesses observed rescuers pull a young boy from the rubble, alive.

On Thursday afternoon, State Fire Marshal Jimmy Patronis said emergency workers were hearing sounds from the rubble and it is believed that one of the sounds is from an individual in the parking garage area that they are having difficulty getting to.

"It's kind of hit or miss. You get into the zone where you are so passionate and so focused and so determined to make sure you are doing everything possible to save a life in an event like this."

What remains of the buliding leaves material dangling, rubble is scattered everywhere.

According to CNN, "numerous search and rescue personnel have been scouring the rubble, including from the surface, with search dogs, sonar and cameras." Additionally, structural engineers have been assisting rescue workers by "shoring up other places -- such as areas near a parking garage underneath the rubble -- to allow crews to tunnel underneath with light machinery." 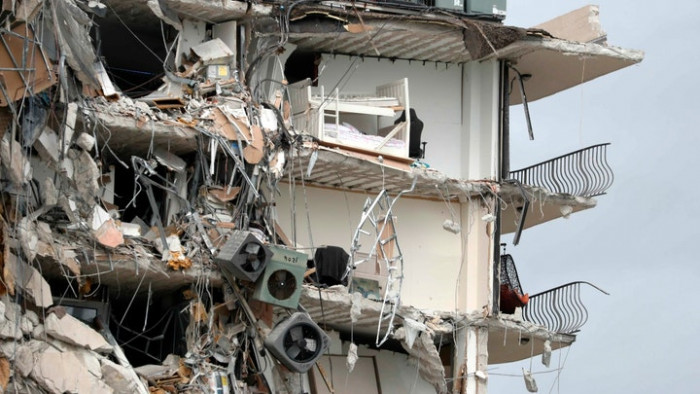 Friday morning Jadallah said that rescue workers will begin to use heavy machinery to "start pulling some of the superficial metal from above," and that this should help rescue crews identify "void areas" where survivors could be.

"As we move through the building, we constantly monitor, making sure that there's no movement, every piece of rubble that we move, we have to take, make efforts to stabilize the building, inch by inch."

Surfside Town Manager Andy Hyatt informed reporters that nobody is sure how many people were in the building at the time of the middle-of-the-night collapse. He said:

According to CNN: "The building's residents reflected South Florida's international and cultural mix, with affluent families from Argentina, Paraguay and Colombia and a tight-knit Jewish community." 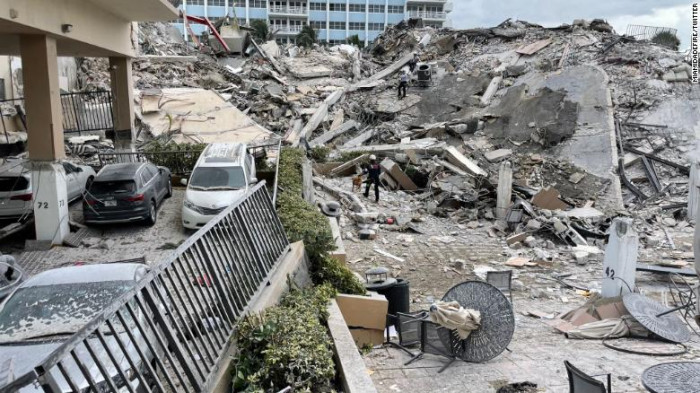 Now, professionals, experts, and local citizens are desperately trying to understand what happened and why.

Gary Slossberg, founder of the South Florida construction company National Home Building & Remodeling Corp told Fox News that "the condominium, which had two-bedroom units on the market asking between $600,000 and $700,000, was built in 1981, when the county had different construction codes." He said:

"With every hurricane, new construction codes come out. New engineering codes… This is [4]0 years later [since the building was constructed]. The codes have changed at least a dozen times. I know they have. So, some of these older buildings are not really built to withstand the type of same weather conditions as when they were built originally."

Sen. Annette Taddeo tweeted Thursday: ""Buildings need to be inspected much sooner than 40 years, especially in a county where sea-level rise can affect a foundation."

"Surfside Mayor Charles Burkett warned during a news conference that the building manager told him the tower was quite full and the death toll was likely to rise. He also said the building could be in danger of additional collapse."

"The building is literally pancaked, it has gone down, and I mean there's just feet in between stories where there were 10 feet," Burkett said. "That is heartbreaking because it doesn't mean to me that we're gonna be as successful as we would want to be to find people alive." 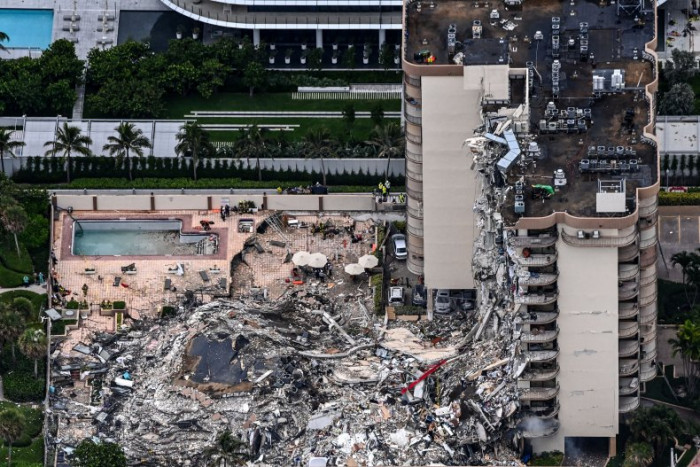 County Commission Vice Chairman Oliver Gilbert spoke for many with his request at a late afternoon press briefing. "I have to implore everybody: Just pray."

Third floor resident Barry Cohen told CNN that he "heard what he thought sounded like an explosion. His apartment was intact, but when he opened his door and tried to leave, he "looked down the hallway ... and there was nothing there,"

"It was just a pile of dust, and rubble," and the building shook as he awaited rescue, Cohen told CNN's "New Day." 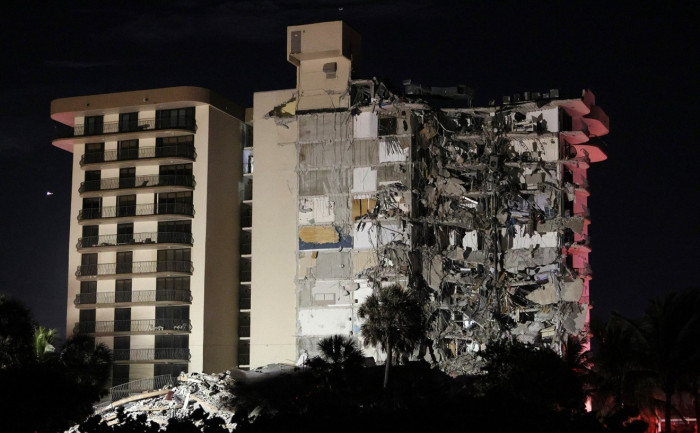 Levine Cava told CNN that the "affected area" is "predominantly Jewish, and rabbis and chaplains are in the area to assist."

He also said that a hotline has been set up for people trying to get information about their loved ones who may have been in the building: 305-614-1819. 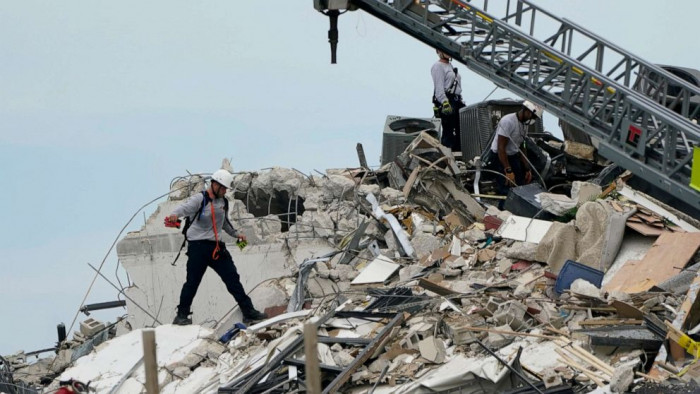 Local resident Nicholas Balboa was walking his dog around 1:30AM at the time of the collapse. He was direcrly responsible for the prompt rescue of a young child. Balboa told CNN that he felt the ground shake and saw plumes of dust and debris.

Balboa and another man went to the back of the building, dreadfully doubting anyone could survive the collapse, when he heard someone screaming, he said:

"Finally, I got close enough to hear him, and (the trapped boy) said, 'Can you see my hand?' He was sticking his hand up ... through the debris. And I could see his hand and his fingers wiggling."

The two men quickly got a police officer to help the boy and Balboa said the boy had been under a mattress and bed frame when he was found, and was pulled successfully out. It's unclear if the later footage of a boy being rescued is the boy Balboa helped save. 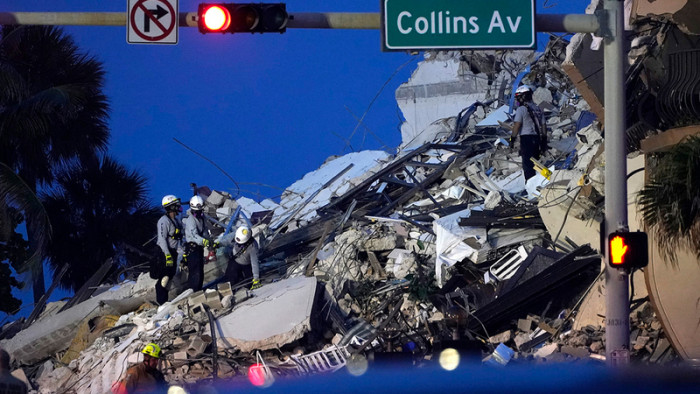 Another local resident, Shmuel Balkany, was walking his dog with his brothers when the bulding collapsed.

Balkany told ReliableNewsMedia that they heard a "really big rumble, and we think that it was a motorcycle -- like, classic, early in the morning -- and we turn around and we just see a cloud of dust coming our way. And we're just like, What is going on? So we, like, we start rushing toward there. We pull our shirts over our face so we don't get any, like, dust, in our eyes and everything."

Shmuel Balkany added: "We have friends who have family that live in the building. We don't even know if they're OK. Some of them are OK. We don't know if the rest are OK. It's very shocking. We're shook. We're pretty shook. It's not, like, processing in our minds yet." 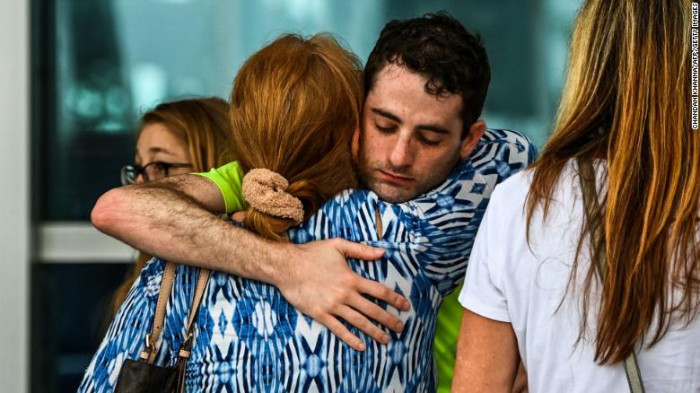 Currently, experts are weighing in while the search continues to try and understand what happened.

CNN reported from Shimon Wdowinski, a professor with Florida International University's Institute of Environment, "he determined in a study last year that the Champlain Towers South condo showed signs of sinking in the 1990s.The condo had a "subsidence" rate of about 2 millimeters a year from 1993 to 1999, according to his study, first reported by USA Today. While Wdowinski said that this sinking alone would likely not cause the condo's collapse, he said it could be a contributing factor."

Wdowinski said that while other buildings in the area moved at higher rates, "if one part of the building moves with respect to the other, that could cause some tension and cracks. What's unusual is that today it collapsed." 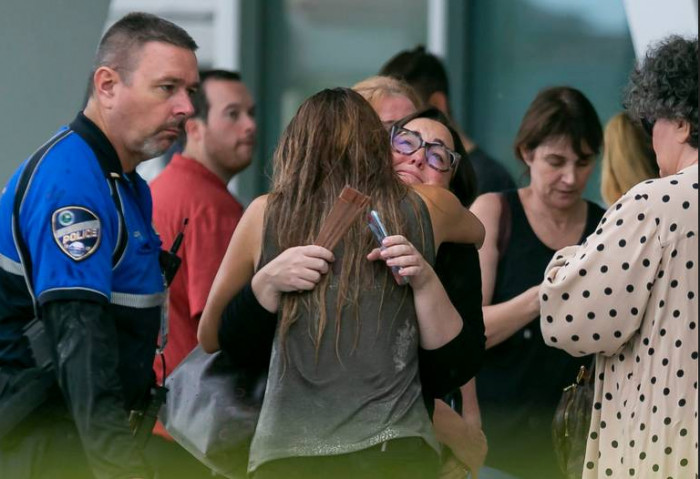 Florida Chief Financial Officer Jimmy Patronis, the state’s fire marshal. told NBC Miami that teams of 10-12 rescuers at a time are entering the rubble with search dogs and other equiptment.

Also reported by NBC Miami: "President Joe Biden early Friday approved a state of emergency declaration from Florida Gov. Ron DeSantis, officially permitting federal resources, including FEMA assistance, to be directed to Surfside. Miami-Dade Mayor Daniella Levine said Thursday she had spoken by phone with Biden, who had offered the full support of the federal government." 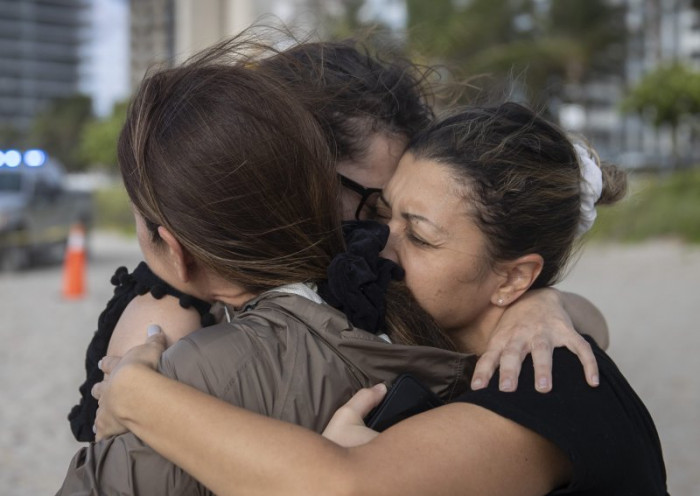 "The Red Cross opened a short-term shelter Thursday and is providing hotel rooms for displaced families. It also committed to providing small grants for short-term expenses and mental health counseling and services for each family." 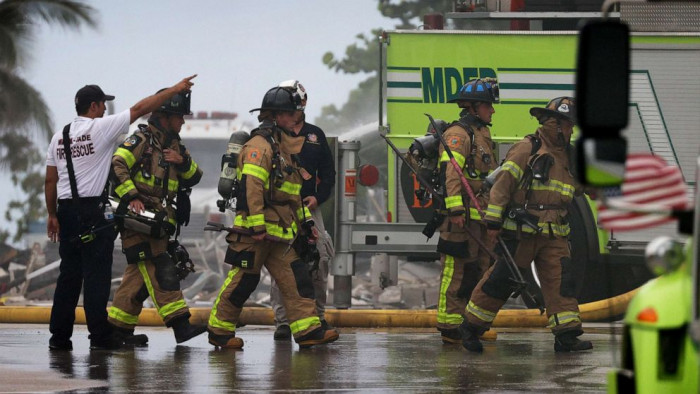 "TV doesn't do it justice, it is really traumatic to see the collapse of a structure like that. We still have hope to be able to identify additional survivors." 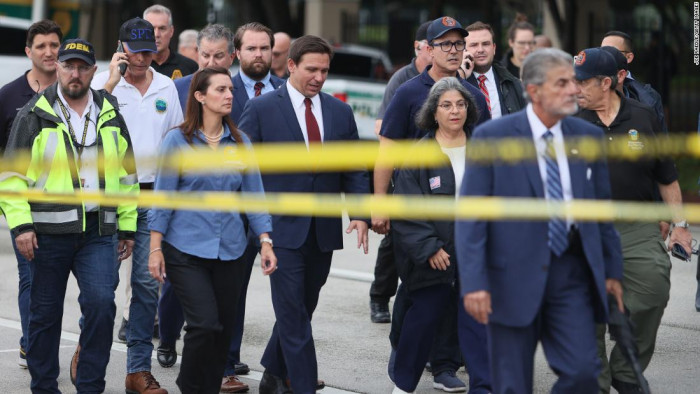