Not long after the month-long celebration of Pride in June, a lot of negativity has been spreading around like wildfire. In the US, the Supreme Court is prepping to determine whether or not homosexuals and transgender individuals are protected by current workplace discrimination laws and shortly after being exposed on a "gay hunting" website in Russia, an LGBT advocate was murdered.

It's dark times like this that we could use a moment to reflect on something beautiful, like love and marriage equality. Recently, Amit Shah and Aditya Madiraju, a gay Indian couple married in a breathtaking, traditional, religious ceremony in a Hindu temple and thanks to the professional photographer Charmi Patel Peña, the photos are going completely viral!

Amit, a 32-year old dance choreographer, and Aditya, 31-years old and working in risk management while enjoying the art of illustration and photography, married in a traditional, religious Hindu ceremony on July 19th after a civil ceremony in January. 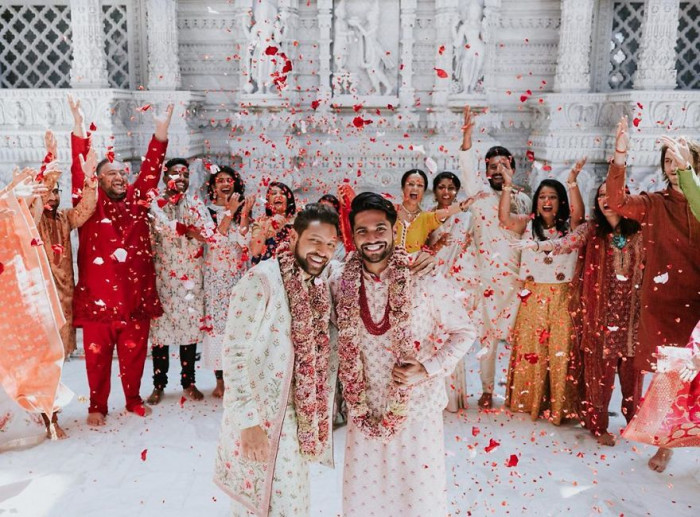 In an interview with Vogue, Amit Shah said:

We wanted a proper Indian wedding. At a time when Aditya's parents, who are based in India, were visiting us in America for the first time felt like the ideal date. It was all completely organic, we didn't force anything. We are truly lucky to have parents who are so supportive. 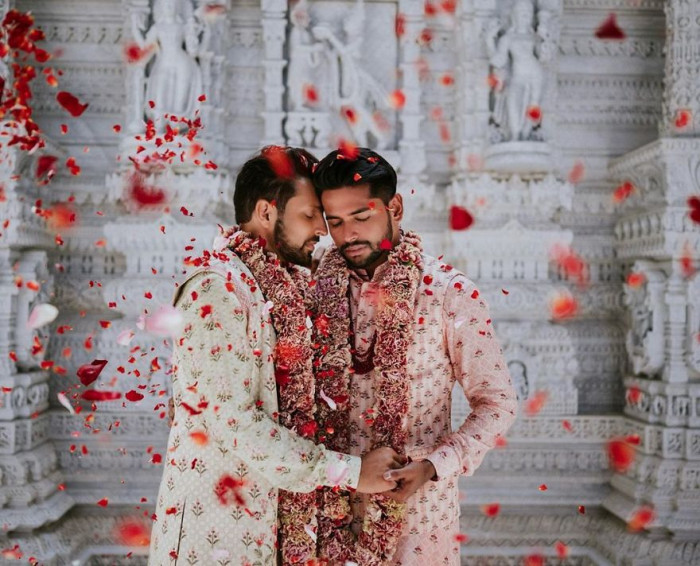 The stunning duo wore striking kurtas by designer Anita Dongre during the actual wedding ceremony. Kurtas are a traditional clothing worn predominantly in India but have expanded elsewhere in the world.

As the couple's photos spread far and wide, they turned to Instagram to write:

We didn’t realize the impact a simple wedding at a temple would have on people around the world looking for hope.

Additionally, in an interview with Irish News, Aditya said:

Having a traditional wedding is something that wasn’t out of the ordinary for either of us as we come from pretty traditional and conservative backgrounds. 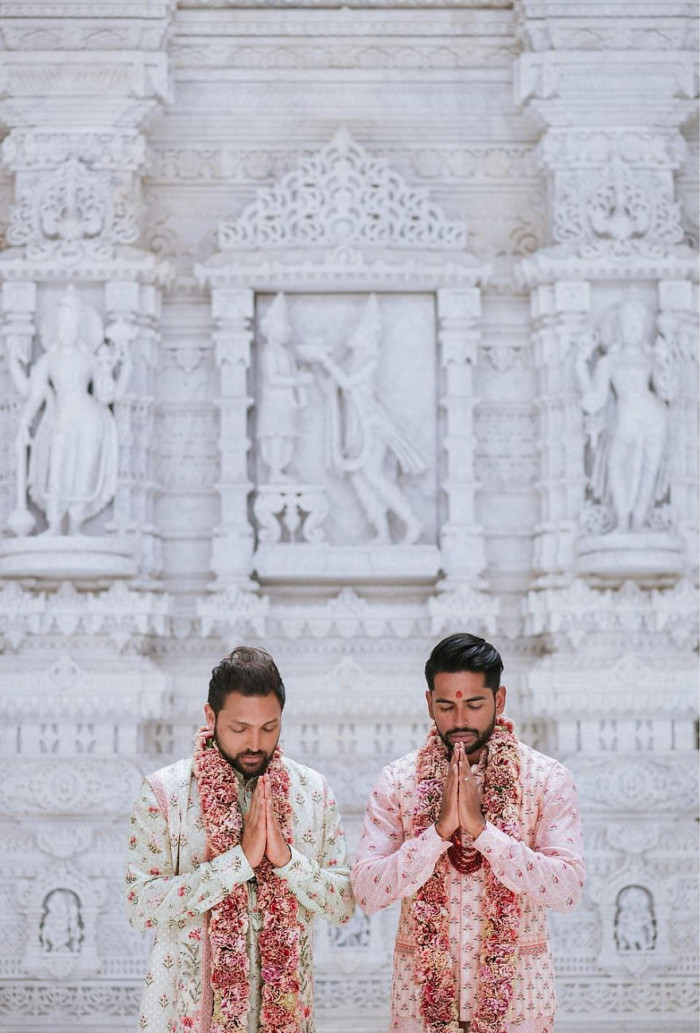 Charmi Peña of Charmi Peña Photography was excited to document the photos, in an interview with Bored Panda she said:

I knew I was documenting something big for the Indian community. And my gut feeling has been borne out in the tons of messages from LGBTQ people who have said that the images give them hope. 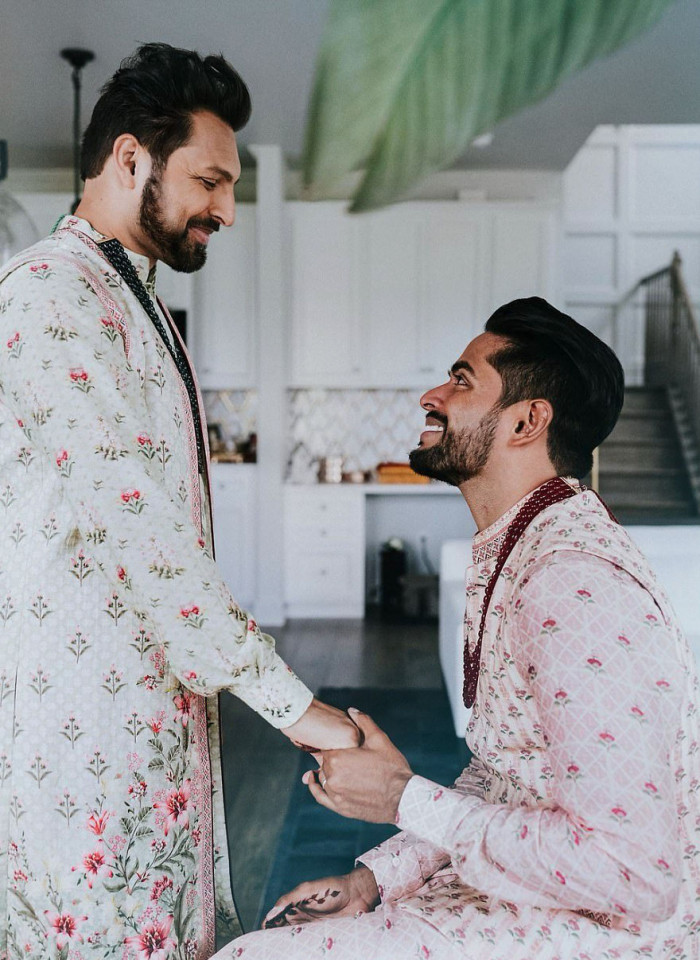 When asked how she felt about the images going viral and inspiring people globally, Peña said:

I’m excited of course — but mostly happy that people are seeing them. Representation matters, and knowing how seeing themselves reflected is helping people, is so fulfilling for me. 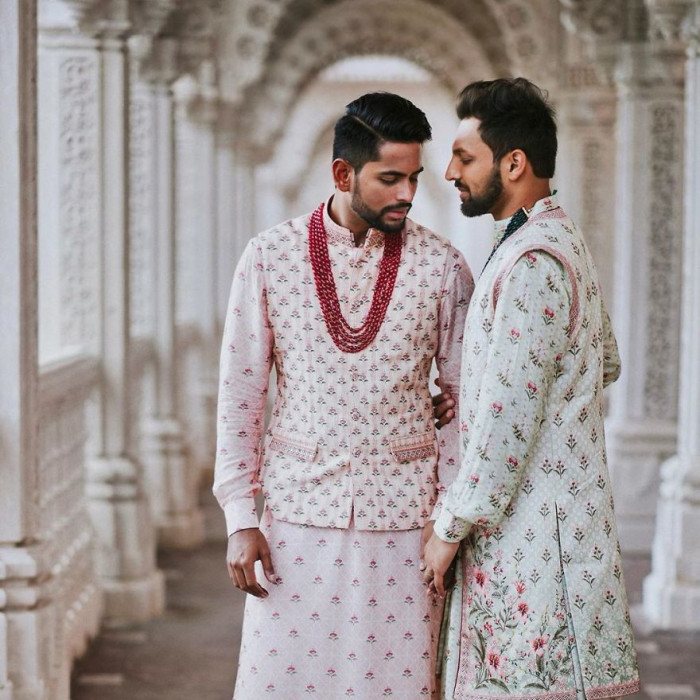 Amit and Aditya met "three years ago in a small Lower East Side bar for a friend’s birthday. Since that night, we have been together.” Amit said:

Although we have completely different personalities, thanks to our similar interests we hit it off instantly. 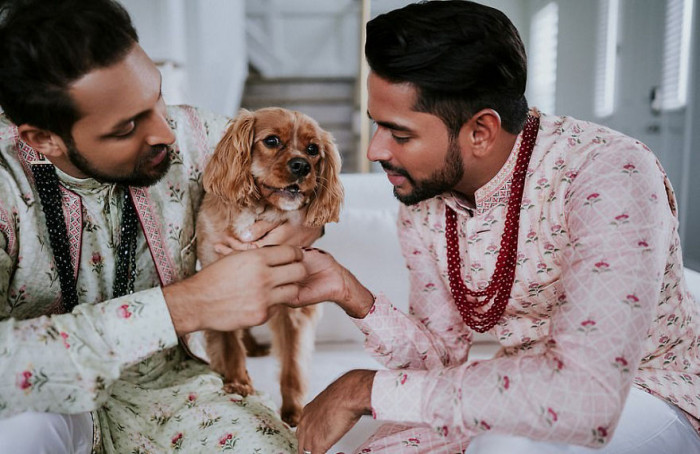 It was a simply ceremony only with our friends and family. We did a puja, garland exchange and pheras. We didn’t realise the impact a simple wedding at a temple would have on people around the world looking for hope. There is no secret to acceptance, tolerance, or happiness. You just have to find the right partner to take the step with. Let the truth of your love speak for itself 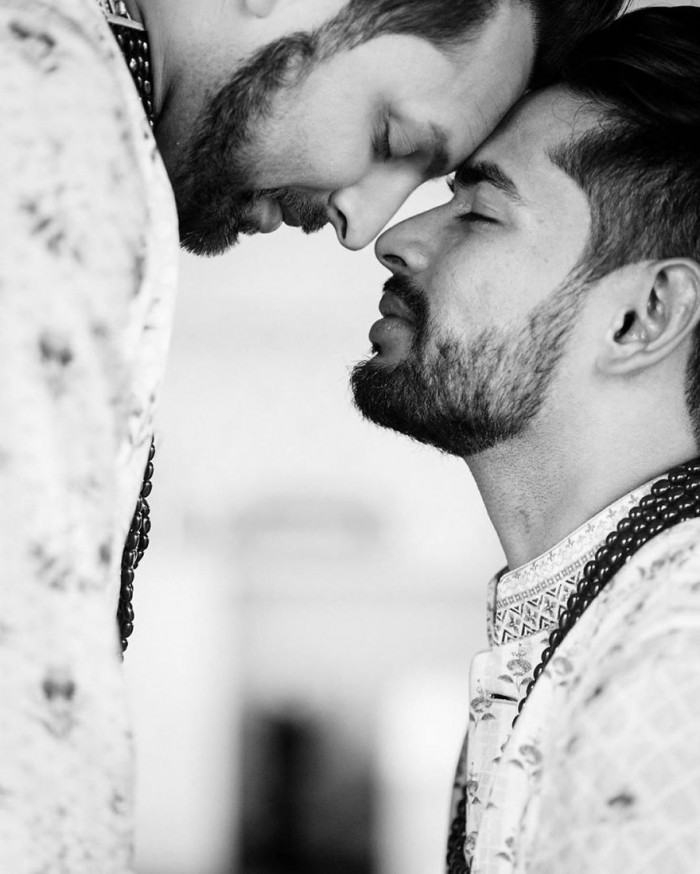 In India, same-sex marriage hasn’t been recognized legally yet. Opinions on same-sex marriage vary from blatant disapproval to favorable, but it depends on the area, community and temple in question. However, when Shah and Madiraju came out to their parents a year into the relationship, they were met with resounding support. 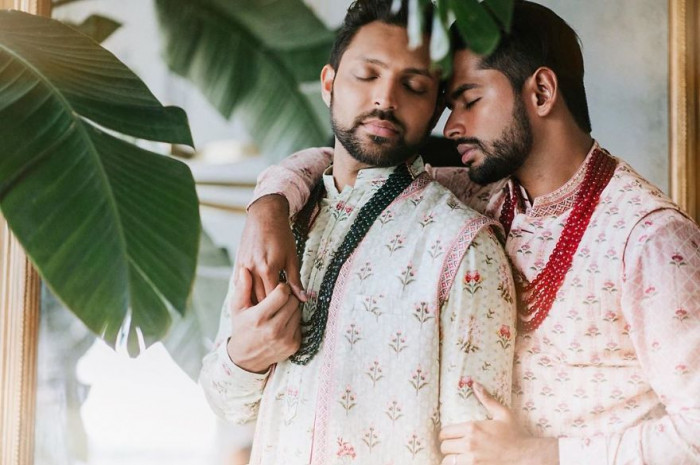 The big day was intimate, but it was incredible beginning to end. They began with an intimate, al fresco mehandi party, in the home the couple built together. 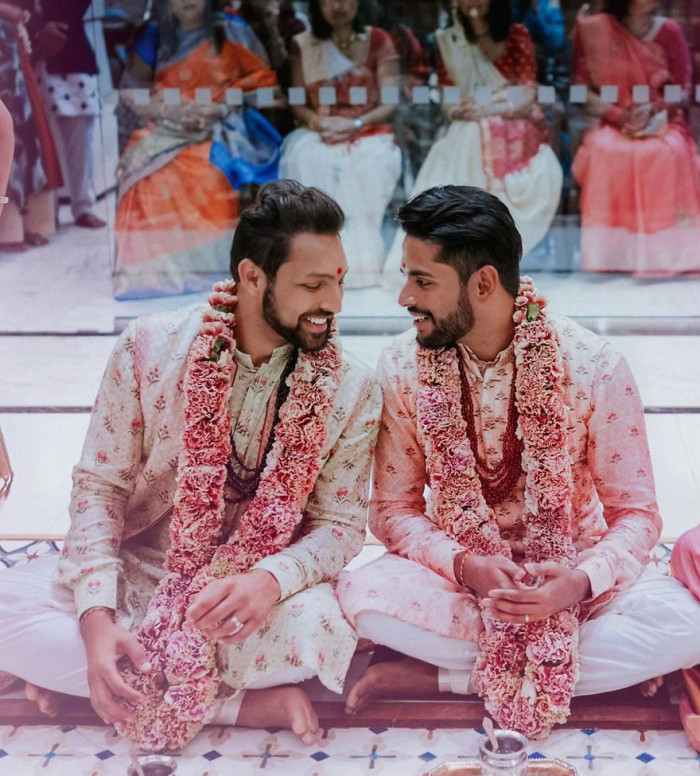 While typically a banquet might be expected from such an occasion, the couple went far more laid back and elegant. Opting instead for a backyard garden festivity. They decorated with the traditional Indian wedding flower, marigolds, and what can only be described as whimsical lights. 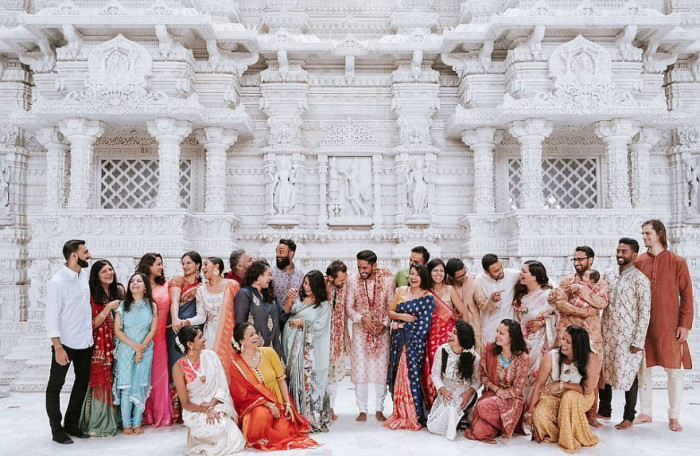 After a relaxed backyard beginning and a gorgeous, intimate ceremony, the newly-weds came back the next day to "wrap up the festivities." They treated their guests to a sangeet-style cocktail party at Pondicheri NYC. The industrial all-day cafe was known for serving Indian cuisine but Madiraju says it was chosen for more significant reasons:

We would go to the eatery often when we lived in the city so we wanted to bring the celebration back there. 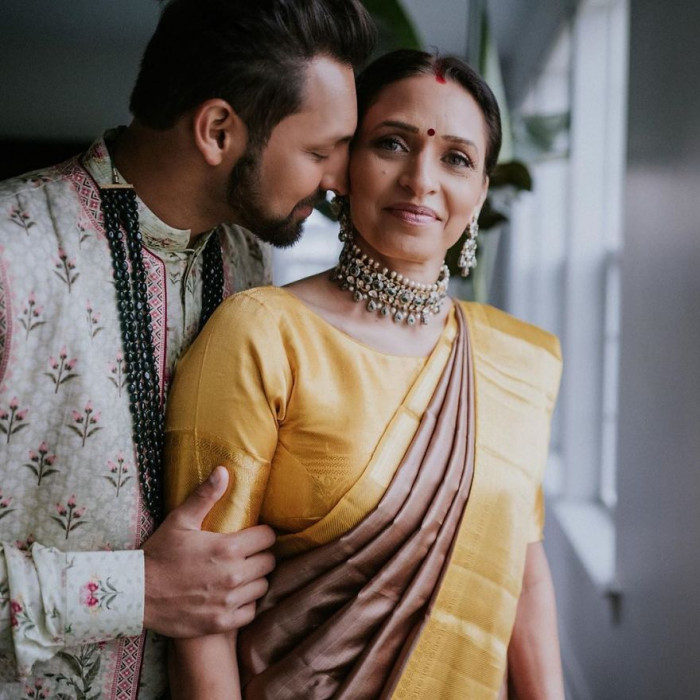 As an outpouring of support rolled in, the grooms turned to Instagram to express their gratitude:

Thank you everyone who took time out to congratulate us. We are unable to respond to each and every message but are very grateful for the support system we have witnessed. As we fall back into our routine life it is important to remember that the right to equality and freedom of expression is a given. No one should be mistreated because they have taken a different route than yours. Humanity and love over hatred. 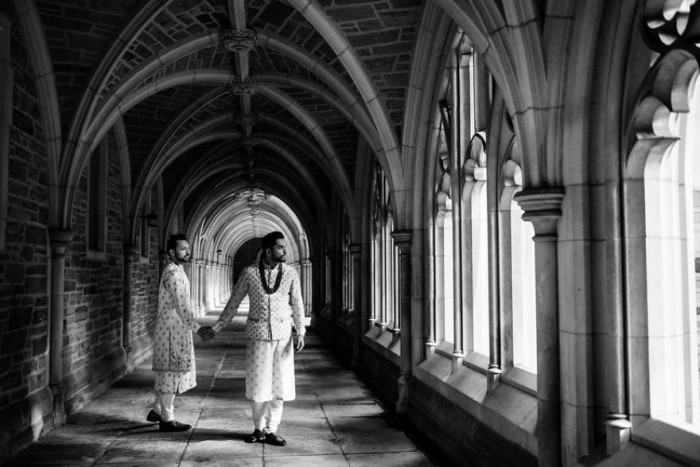 In an interview with Irish News, Aditya said:

Our parents have taught us a lot about religion and how to follow customs. After we got married at City Hall, we knew we wanted something more traditional with our families and friends involved. For us, it didn’t seem complete until we had a chance to conduct the proper Hindu prayers. 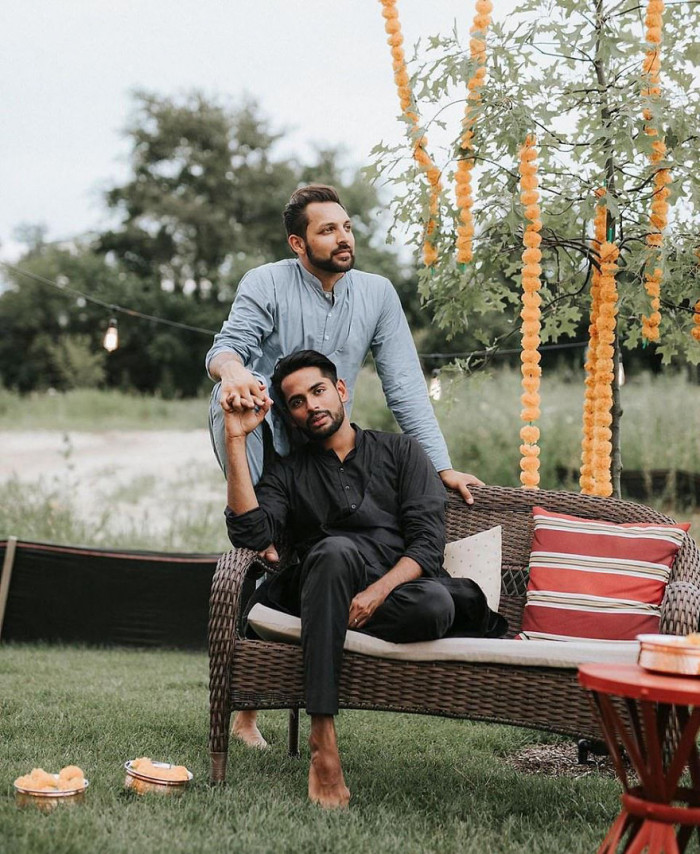 I have a bit of a bad memory. But when I see photos I remember everything: the smells, the sounds — the emotions. Photography lets me give that to others.

And truly, looking at the incredible photos of the couple's special day, you are right there, surrounded by the warmth, love, and joy of the day. 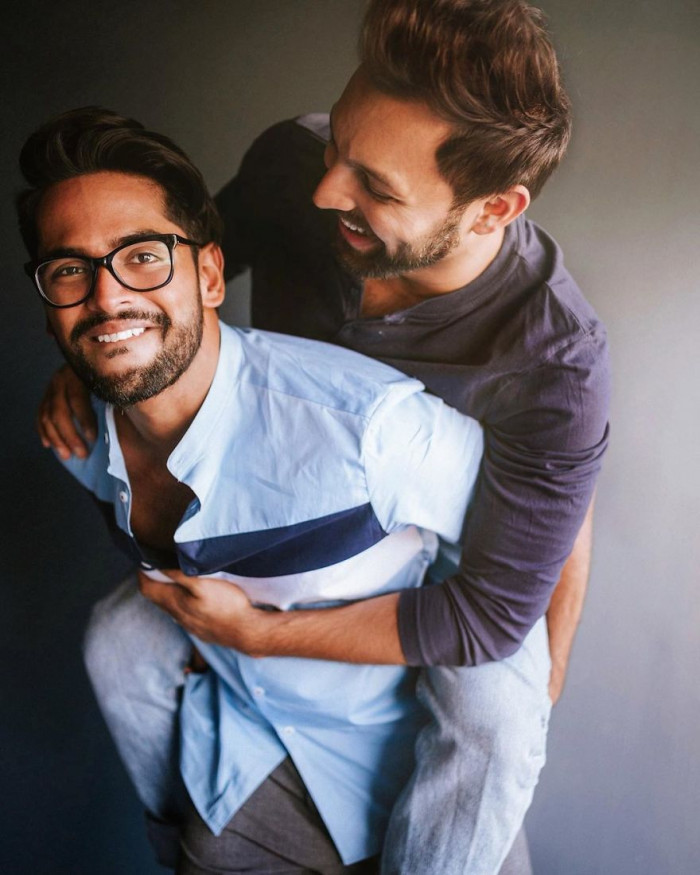 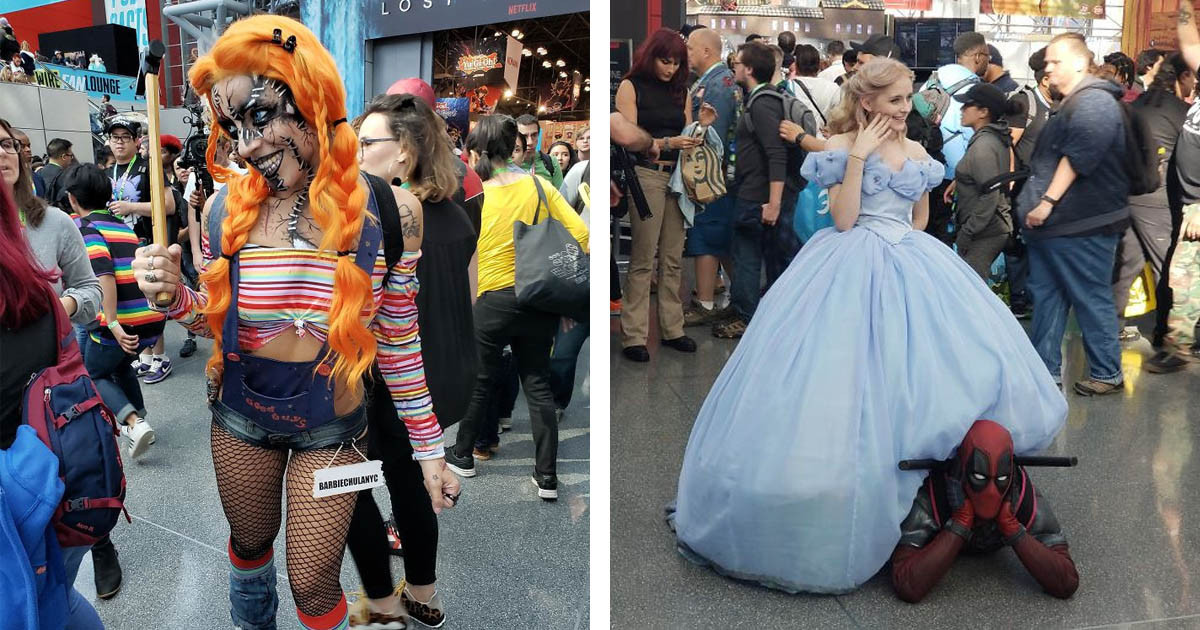 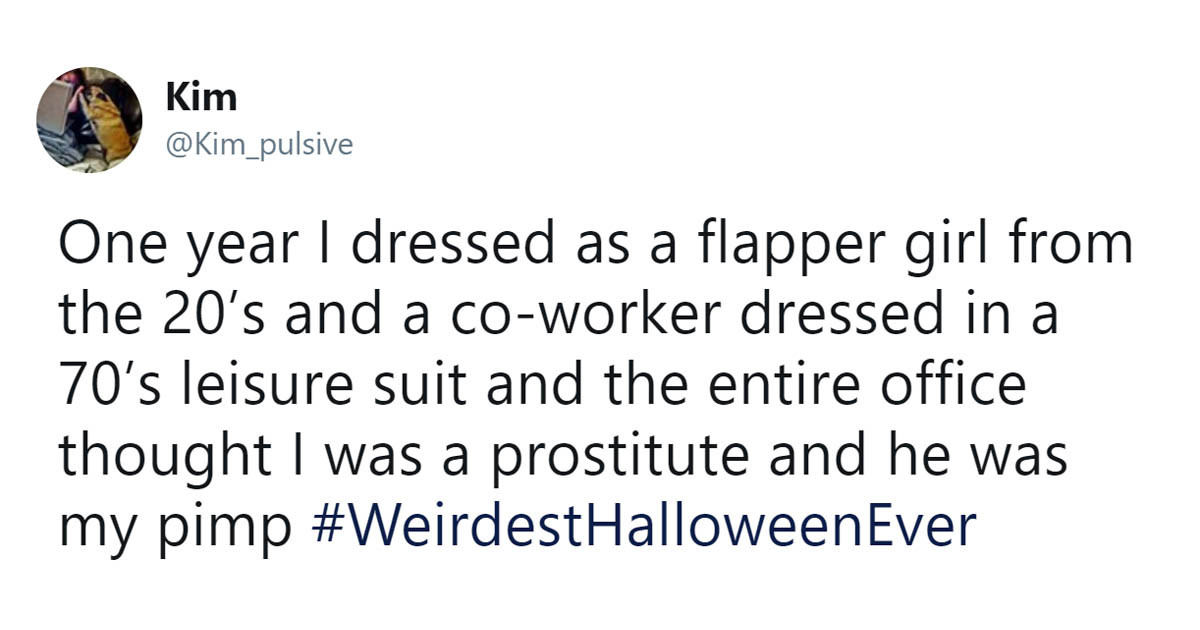 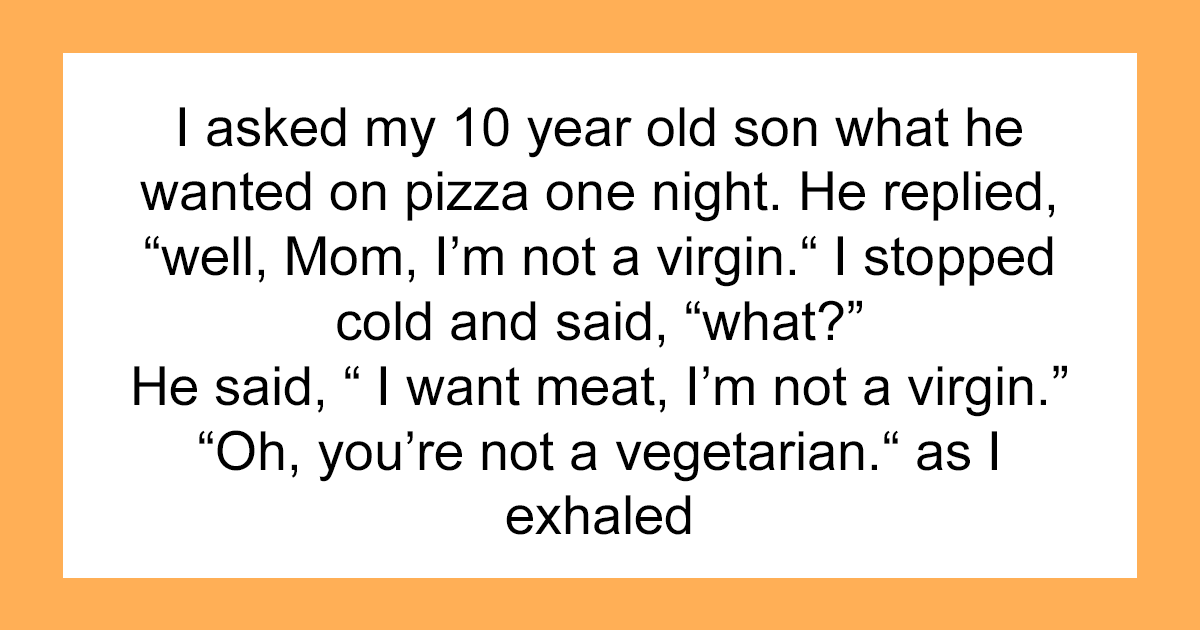 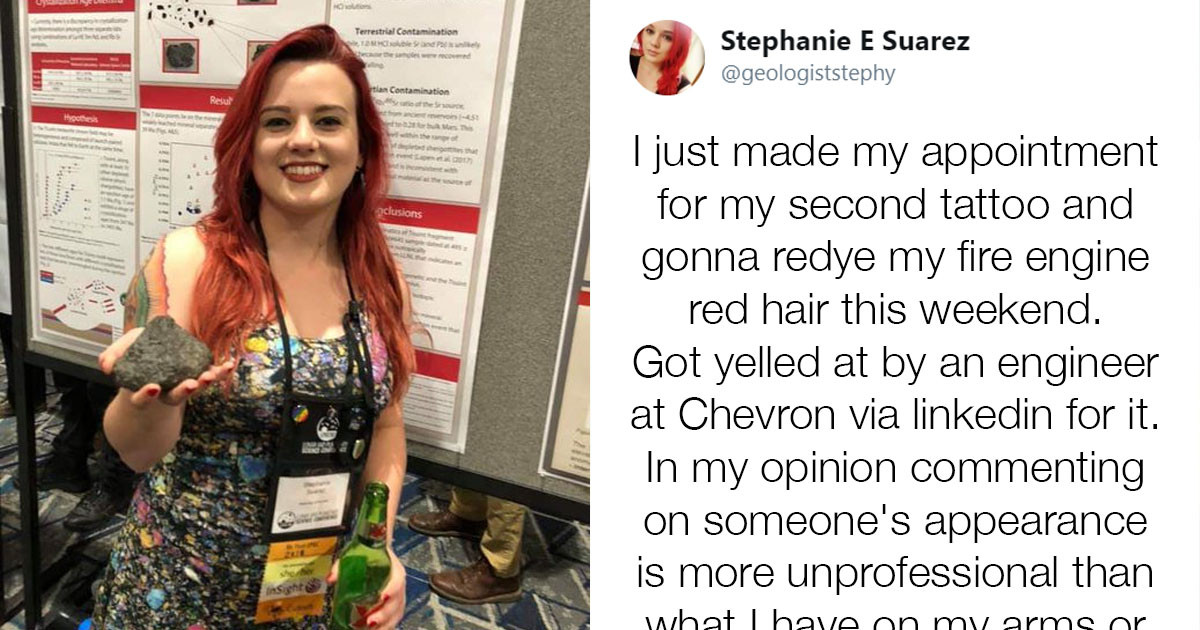