Harry Potter movies have a huge fan base all over the world. You know, the type of people who can’t wait for another movie to come out, but without new releases in sight, go over the entire movie series once more. And then again.

We can’t blame them because they are filled with small but ingenious details and messages, Easter eggs that make us look at the franchise from a whole different perspective. (and go over the movie series once more, just to see what this detail is referring to). Reddit users share details about Harry Potter movies that are not easy to spot but are marvelously planned and executed.

1. "When Harry Reveals That He's Alive In Deathly Hallows Part 2, George Turns To Excitedly Tell Fred, Who's Normally Always Next To Him" 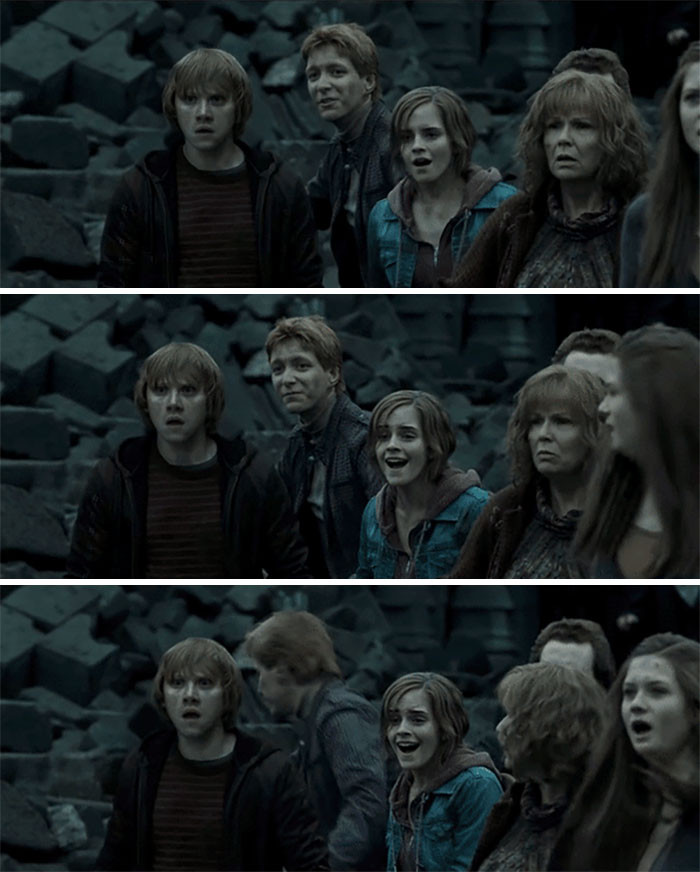 2. "Snape's First Encounter With Harry And His Secret Message"

"One of the questions Snape asks is if Harry knows what would result in adding the powdered root of asphodel to an infusion of wormwood. Harry doesn't know the answer, but that's not the important part.

This is actually a coded comment that would be lost on all viewers that don't have an extensive knowledge of Victorian-era flower symbolism. Asphodel is a lily, which means demise under the Victorian flower code, while wormwood reflects loss and absence. Snape is actually referencing Harry's mother Lily with this comment"

3. "In The Harry Potter Films, Voldemort’s Robes Faded In Colour Every Time A Horcrux Was Destroyed, To Give The Impression He Was Slowly Fading Away" 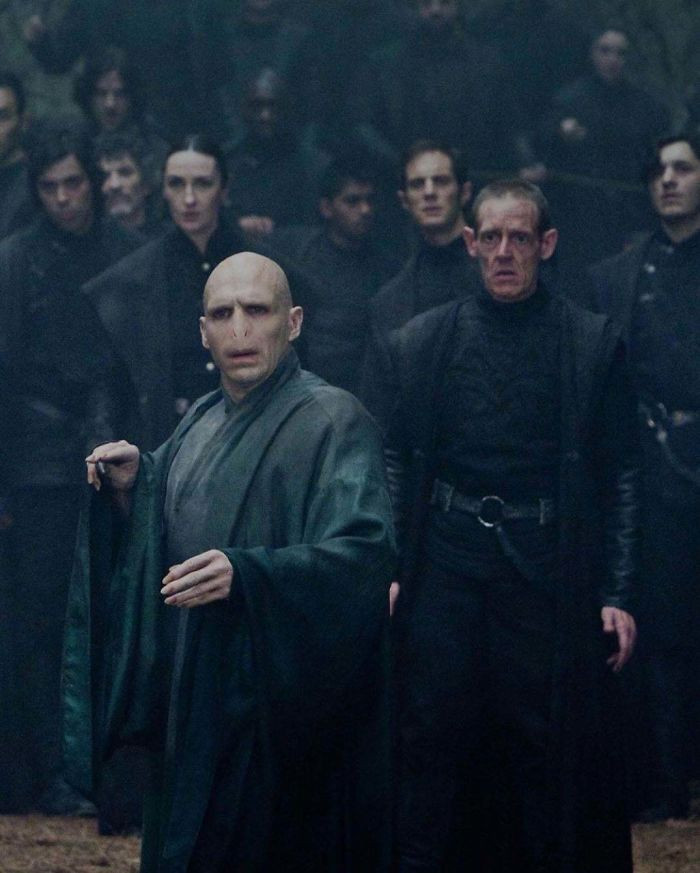 Tiny but elaborate details like the Cheeri-Owls cereal and how the Beauxbatons students are swaying to the Macarena are something many of us just missed.

Interesting thing is that the scene where a wizard is going through Stephen Hawking’s “A Brief History of Time” in The Prisoner of Azkaban motivated a trend of fanfic, Harry Potter and the Methods of Rationality, about an ultra-logical and extremely geeky variation of the young wizard.

4. "In Harry Potter And The Sorcerer's Stone (2001), You Can See A Portrait Of Anne Boleyn Hanging In The Staircase. Anne, A Wife Of Henry Viii, Was Accused Of Being A Witch, And Subsequently Executed" 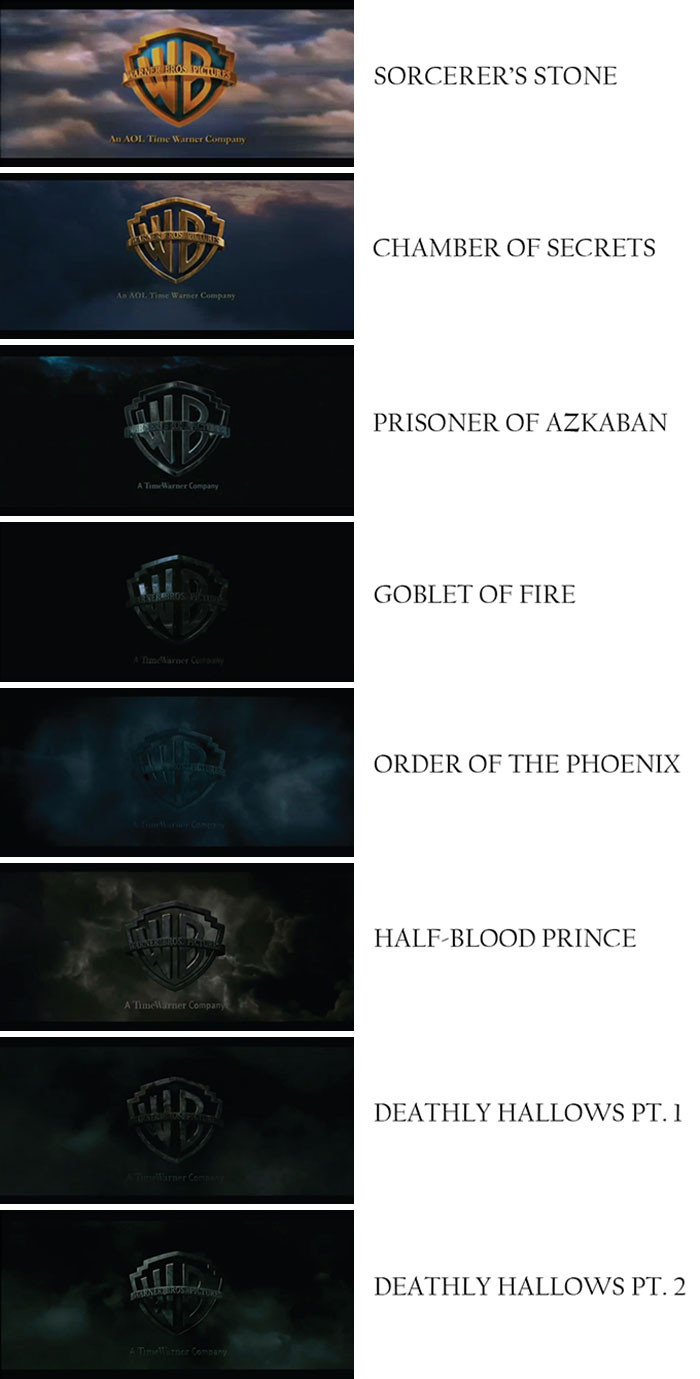 Although the Fantastic Beasts movies are not popular as the originals, they’re still entertaining. The newest FB movie should come out in November 2021. The plot is not yet revealed, but some info suggest that some of it will take place in Brazil.

6. "In 'The Sorcerer's Stone' Scene Where Neville Gets A Remembrall, He Can't Remember What He's Forgotten — But It's Probably His Robe, As He's The Only One Not Wearing One" 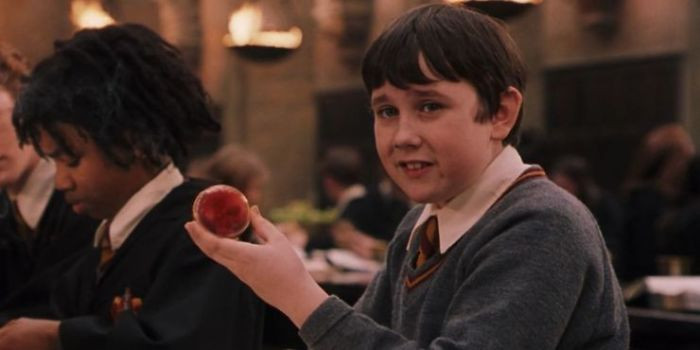 7. "The End Credits Of 'Goblet Of Fire' Feature This Magical Disclaimer: 'No Dragons Were Harmed In The Making Of This Movie'" 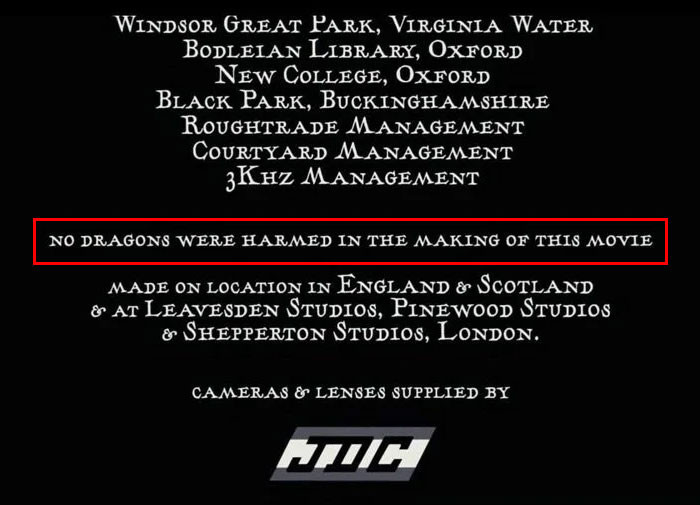 8. "The Ways Harry, Ron, And Hermione Wear Their Scarves And Ties Reflect Their Personalities"

9. "In 'The Sorcerer's Stone,' You Can See Mcgonagall's Name On The Quidditch Trophy Right Next To James Potter"

10. "In Harry Potter And The Order Of The Phoenix (2007), Harry Wears Button Down Sweaters At Da Meetings Similar To What Professor Lupin Would Wear. This Was Daniel Radcliffe's Idea As He Thought Harry Would Want To Emulate His Favorite Dada Teacher" 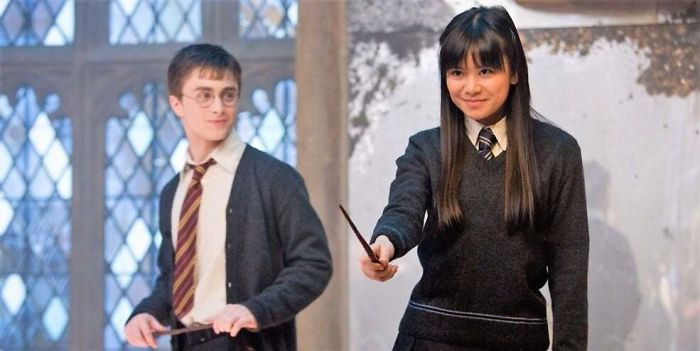 11. "In Harry Potter And The Chamber Of Secrets (2002) Before Harry Gets Sucked Into Tom Riddles Diary, He’s In A Candle Lit Room. When He’s In The Diary, Everything Is In Black And White Yet, We Can Still See The Candle Light Flickering On His Body" 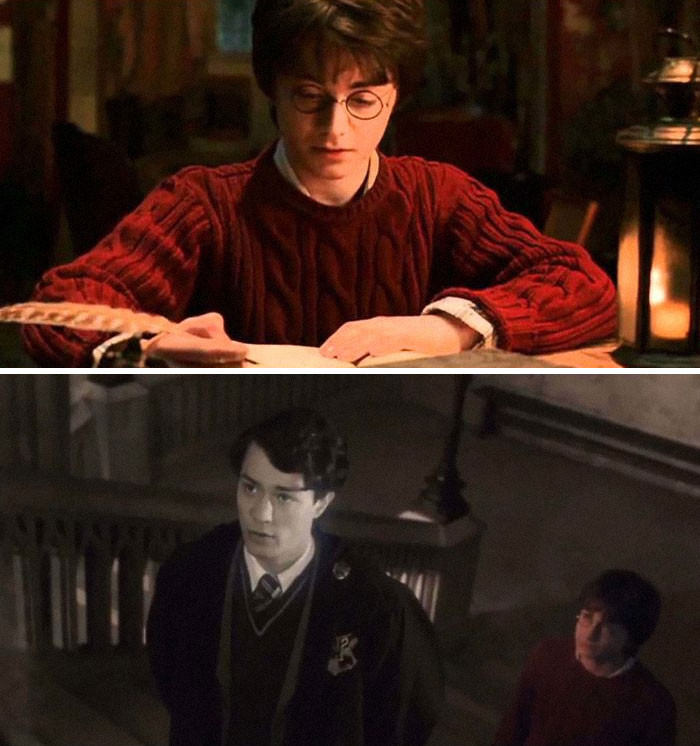 12. "In 'The Goblet Of Fire,' A Reflection Of Nagini Slithering Can Be Seen In The Warner Bros. Logo" 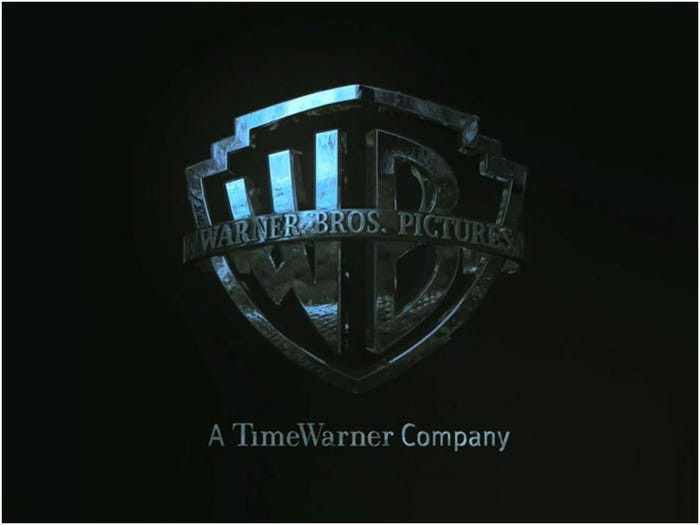 13. "The Title Of The Second Film In The Fantastic Beasts Franchise, “The Crimes Of Grindelwald” Contain The Deathly Hallows" 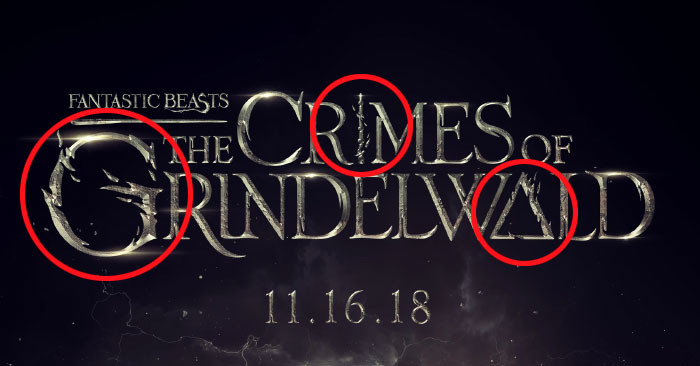 14. "In The Background Of The Cafe In Deathly Hallows Part I, There’s A Poster For The Play “Equus” — A Real Play That Starred Daniel Radcliffe And Richard Griffiths" 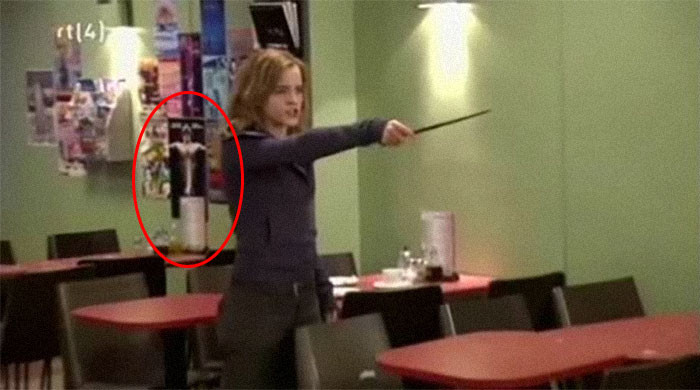 15. "In Snape’s Death Scene, There's A Gryffindor Scarf Hanging Up In The Background, A Reference To His Bravery And Dumbledore Saying He “Sometimes Thinks They Sort Too Soon” In The Books" 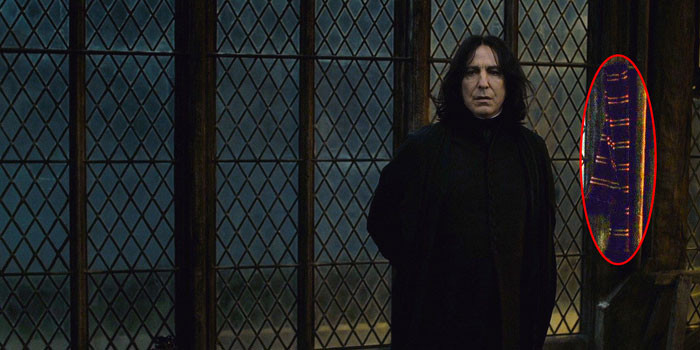 16. "Hermione's Hair Grows Throughout Deathly Hallows Part 1 To Show How Long She, Ron, And Harry Have Been Traveling In Search Of Horcruxes"

17. "In 'Prisoner Of Azkaban,' Newt Scamander Appears On The Marauder's Map" 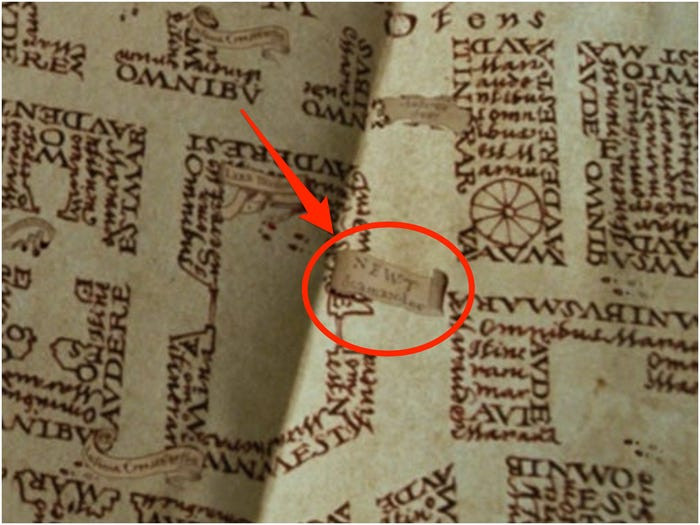 18. "In Harry Potter And The Deathly Hallows Part 2, Snape Is Still Helping The Order Of The Phoenix When He Re-Directs Mcgonagall's Spells To His Fellow Death Eaters" 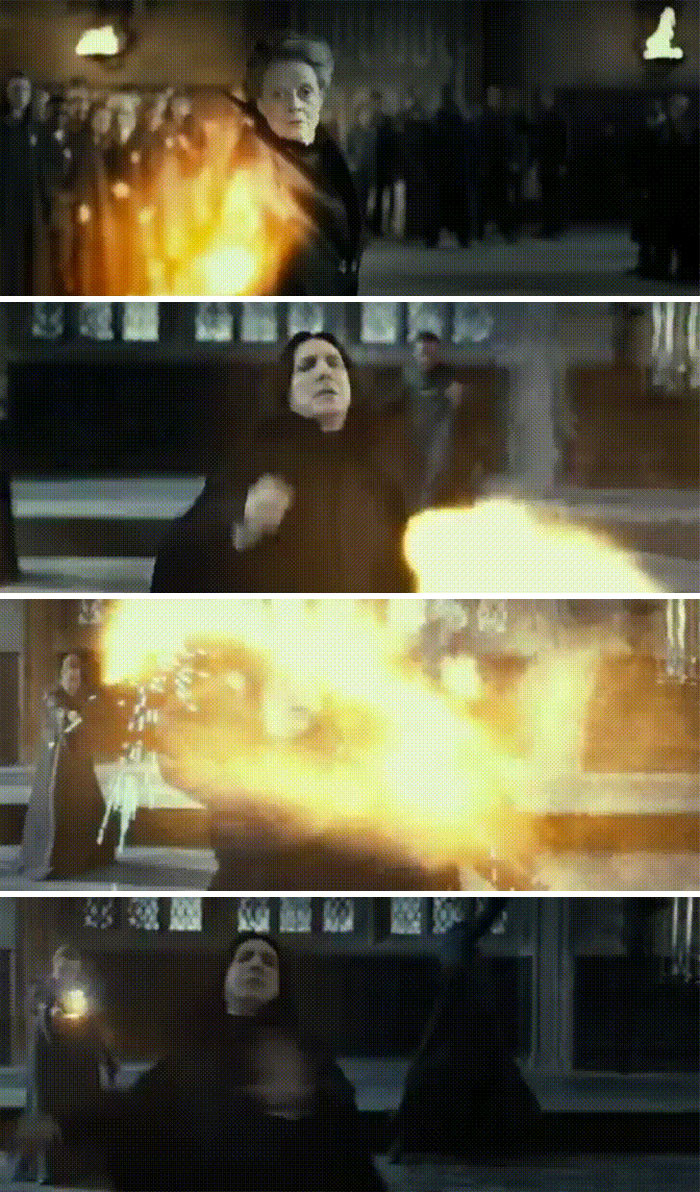 19. "In 'Prisoner Of Azkaban,' A Wizard — Played By Stone Roses Frontman Ian Brown — Is Reading Stephen Hawking's 'A Brief History Of Time'" 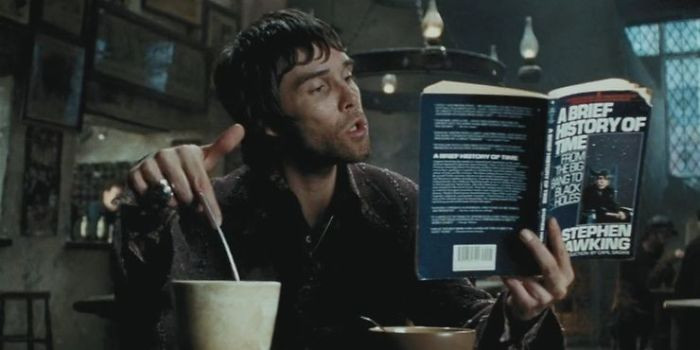 20. "In 'Order Of The Phoenix,' There's A Wizarding World Version Of Cheerios Called Cheeri-Owls" 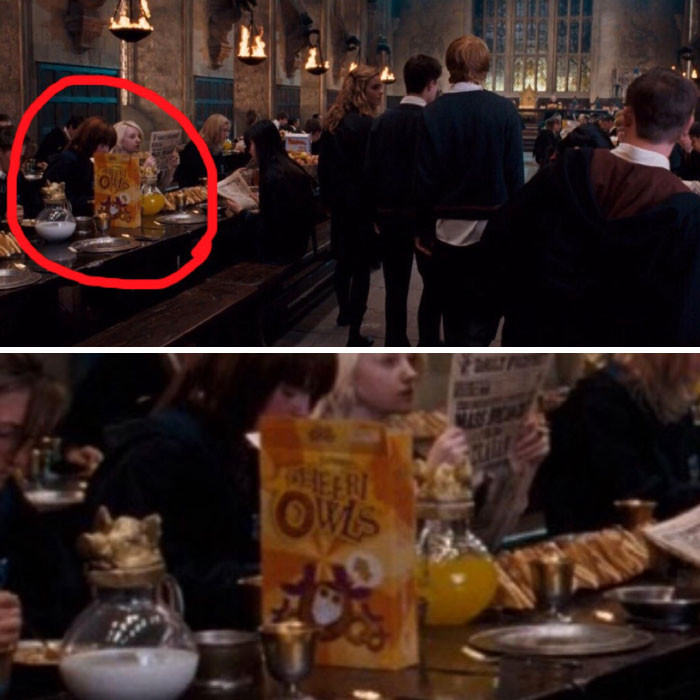 21. "In 'The Half-Blood Prince,' When We See Tom Riddle's Childhood Bedroom There Are Seven Rocks On The Windowsill In That Bedroom, Foreshadowing Riddle Splitting His Soul Into Seven Horcruxes"

22. "In 'The Sorcerer's Stone,' The Actor Who Played Lord Voldemort Is Credited As 'He Who Must Not Be Named'" 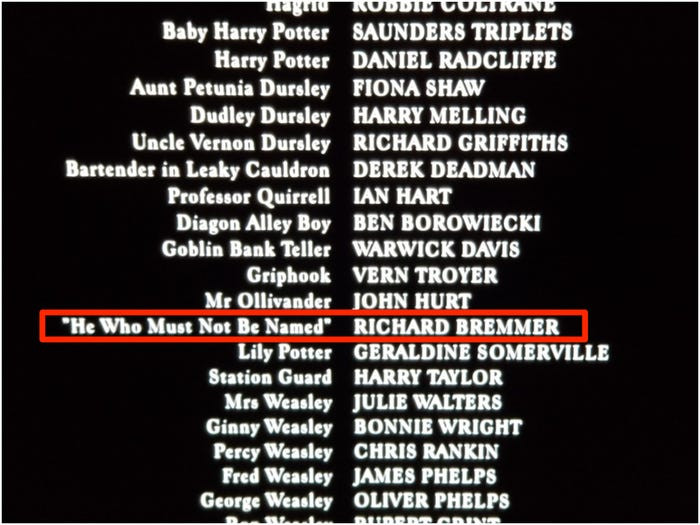 23. "In The Chamber Of Secrets, You Can Spot Gilderoy Lockhart's Second Wig On His Desk" 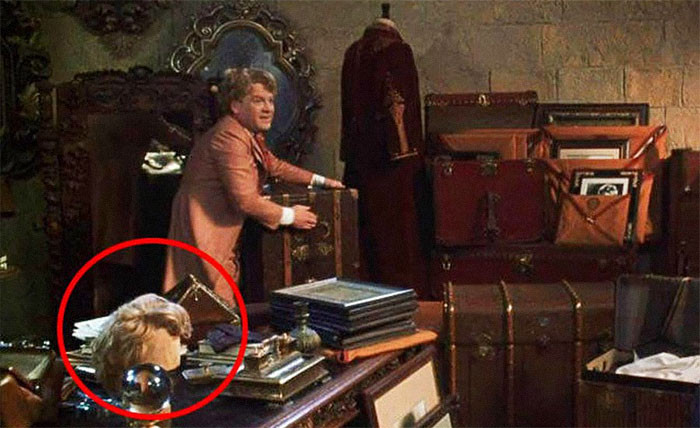 24. "Chamber Of Secrets Has A Post-Credits Scene That Reveals The Fate Of Gilderoy Lockhart" 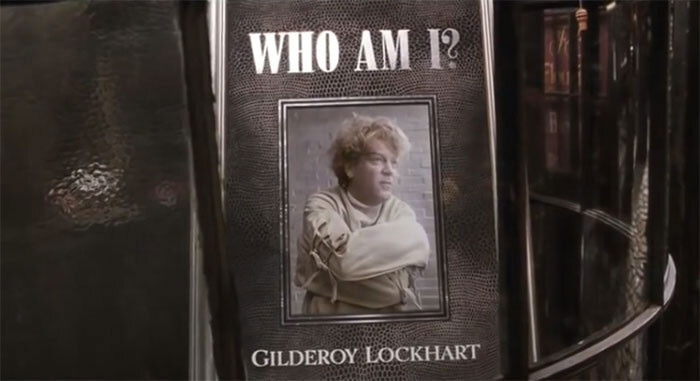 25. "When Oliver Wood Releases The Snitch While Teaching Harry How To Play Quidditch, He Immediately Loses Sight Of It, But Harry Keeps His Eye On The Snitch, Highlighting His Future Talent As A Seeker" 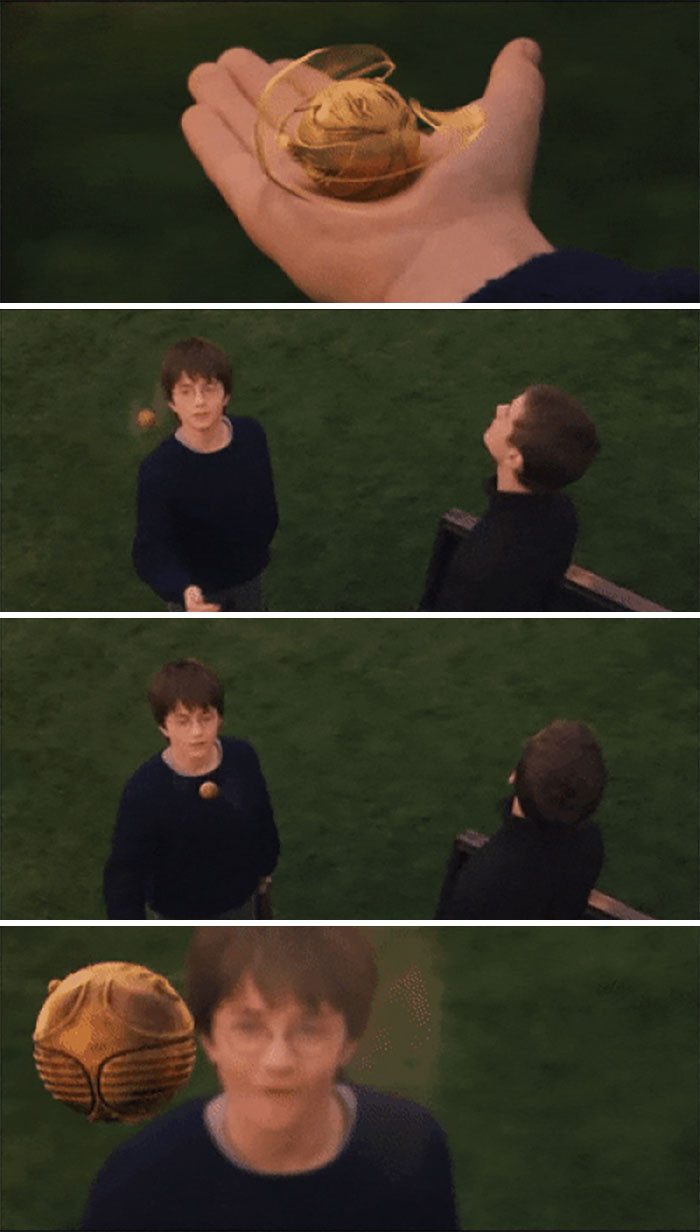 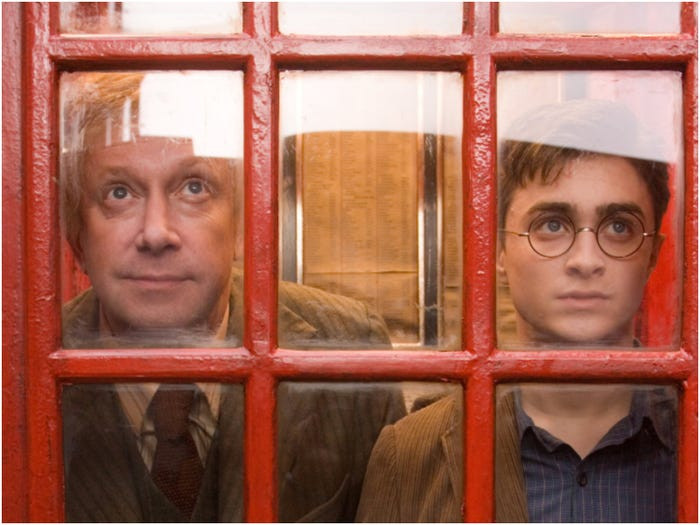 27. "In Harry Potter And The Prisoner Of Azkaban (2004), A Courtyard Fountain Has Statues Of An Eagle Eating A Snake. This Is A Reference To The Mexican Flag. Director Alfonso Cuaron Wanted To Pay Tribute To His Mexican Heritage."

28. "In The Deathly Hallows Part 2, You Can Spy Lucius Malfoy's Azkaban Prisoner Number Tattooed On His Neck" 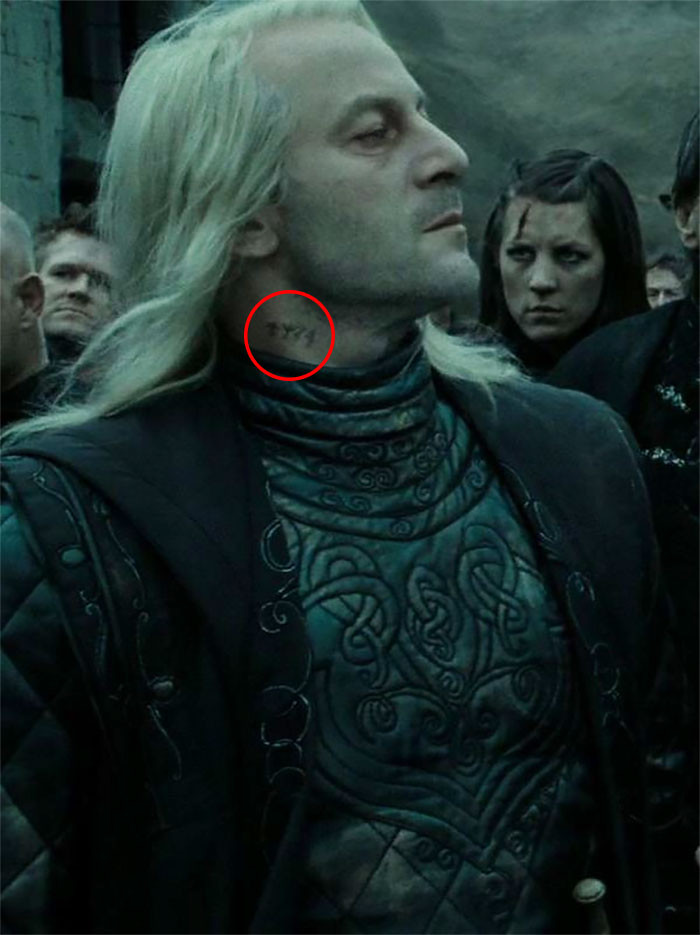 29. "In 'The Sorcerer's Stone,' You Can See Aunt Petunia Dying Dudley's Old Clothes Gray For Harry's School Uniform, Which Was A Scene In The Books" 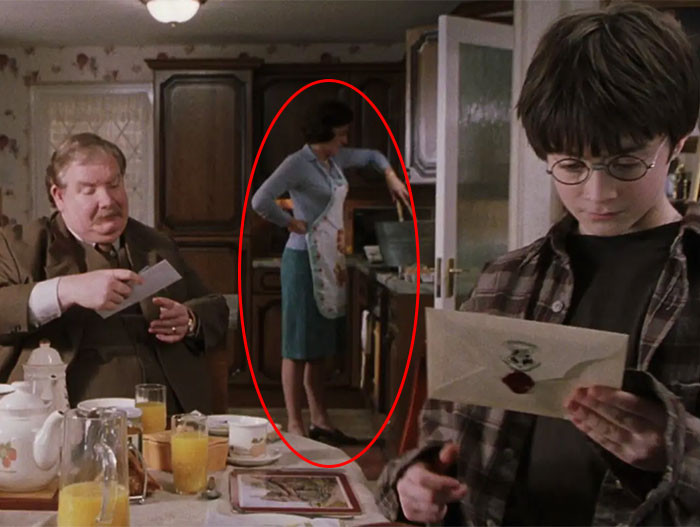 30. "In 'The Sorcerer's Stone,' Harry's Scar Burns Because Quirrell Has His Back To Him, Meaning Voldemort, On The Back Of Quirrell's Head, Is Facing Him" 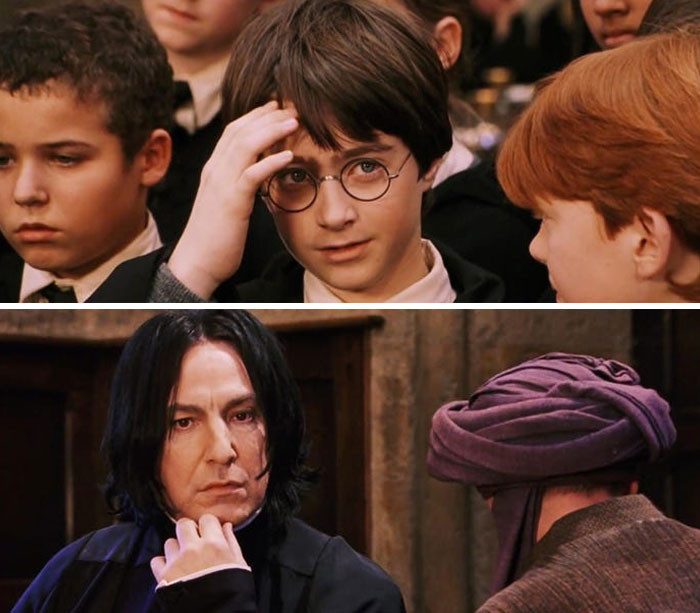 31. "In 'Chamber Of Secrets,' One Of The Options On Molly Weasley's Magical Clock Is 'Prison'" 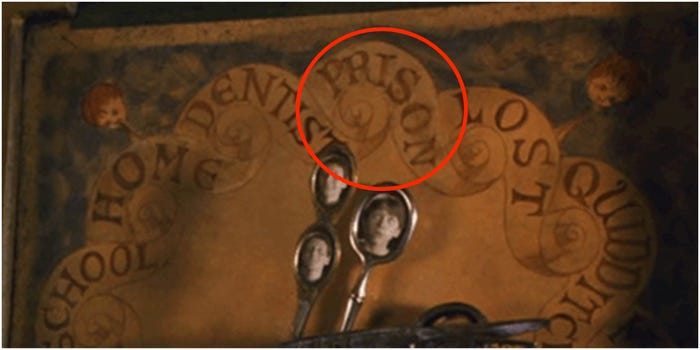 32. "In 'Goblet Of Fire,' We Catch A Shot Of The Deathly Hallows Symbol Way Before We Even Knew What They Were" 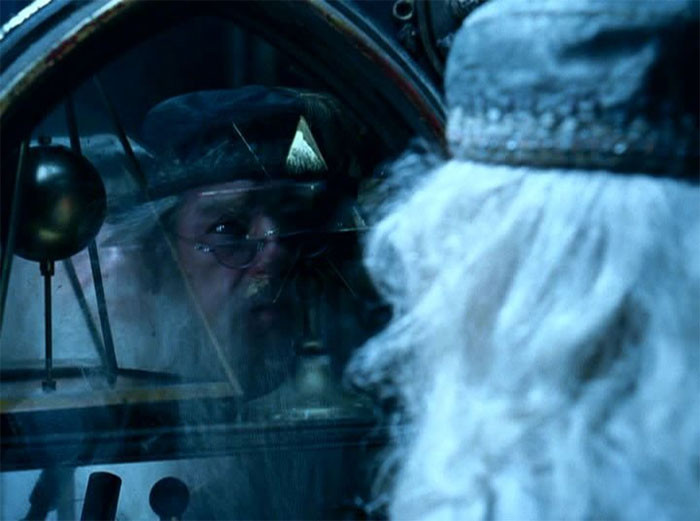 33. "In The Chamber Of Secrets, Sherbet Lemon Is The Password Into Dumbledore's Office. Then, In The Half-Blood Prince, The Candy Can Be Seen On Dumbledore's Desk" 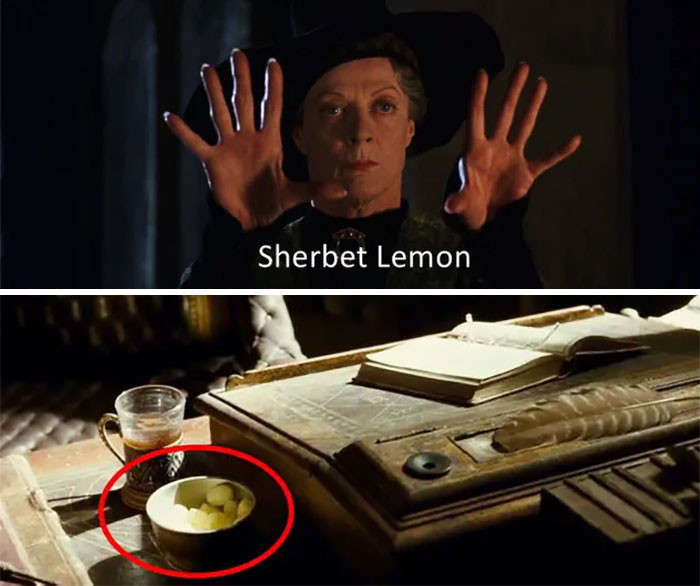 34. "In Prisoner Of Azkaban, The Bartender Makes A Bottle Disappear" 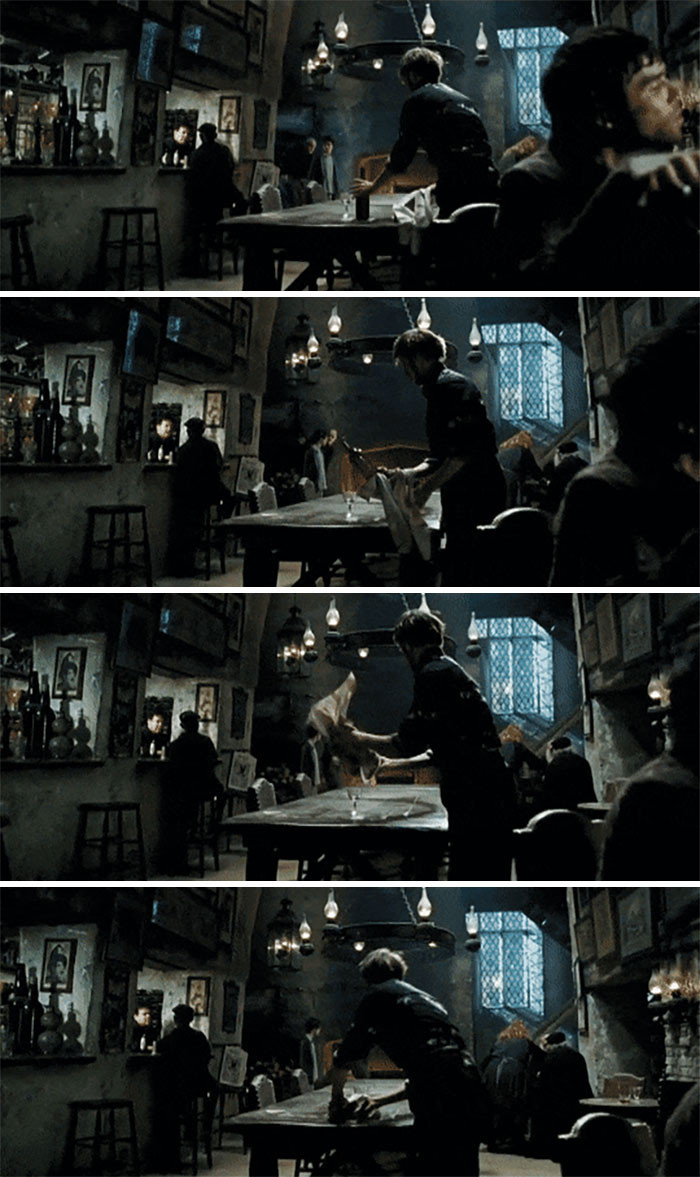 35. "In The Sorcerer's Stone, School Children Wearing Green School Uniforms Walk By The Reptile Room. This Is A Nod To Slytherin's House Color Being Green And Their Symbol Being A Snake" 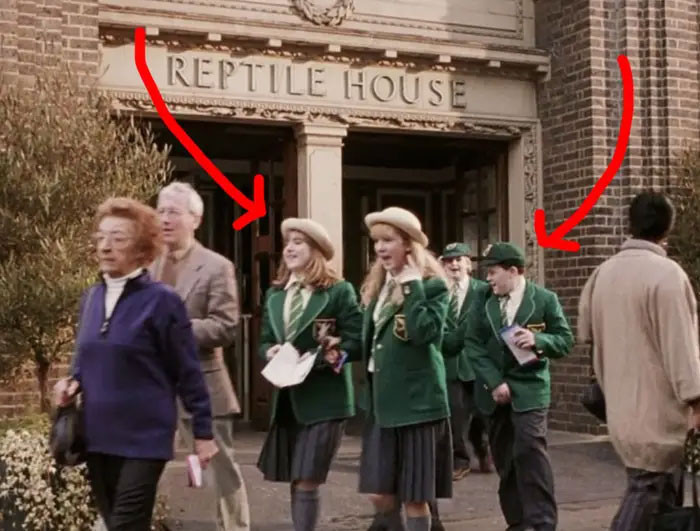