When it comes to the legal rights and protections of the LGBTQIA+ community, 2022 shows up in stark contrast to the last several decades. However, there is still an astronomical amount of work to be done in multiple areas besides the law, most especially when it comes to inclusion acceptance.

People twist themselves into all sorts of contortions and pretzels trying to insist they don't "hate" gay people or have a problem with "the alphabet people," but their actions and words often speak louder than their self-defense assertions. Their irrational fears and bigotry often seep out in the most absurd ways imaginable.

Once upon a time, a mother turned to Reddit seeking advice for dealing with her husband's irrational assertions that their 1-year-old infant son was showing signs he must be gay. She was seeking validation that she wasn't being the irrational one as well as advice for how to confront him and halt his behavior for the better.

If you're anything other than cisgender and heterosexual, then you probably know all too well what people like this woman's husband are like and you know that no matter how many times he says it's a joke - there's something deeper going on and it's going to come at the detriment of an innocent child. 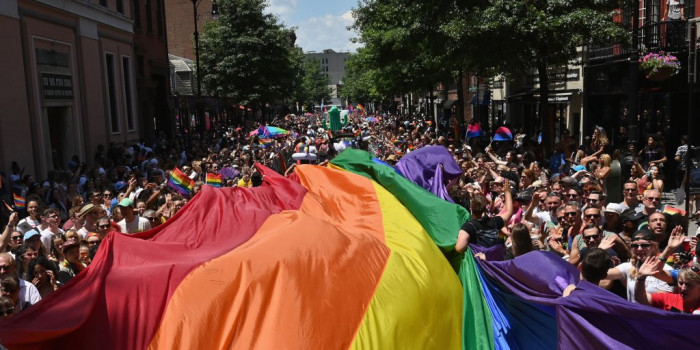 At the ripe age of one, a toddler has barely just existed the stage of "baby," and you'll find that many people (especially parents and early childhood experts) would still consider a one-year-old to be a "literal baby." Therefore, keep that in mind while you read what this man says about his little one. 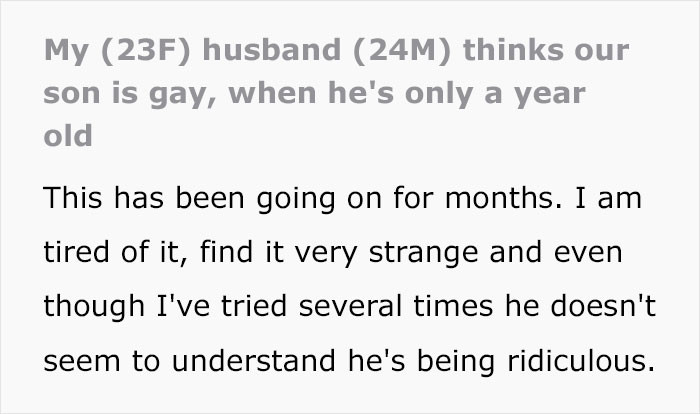 What reasons has this irrational man listed as "proof" their son must be gay?

Dr. Altmann exaplains on Parents.com why babies like shiny and sparkly things:

Whether it is light refracting through a window or jewelry, those shiny and moving lights are irresistible to babies and toddlers, and it starts young!

"Jewelry reflects the light, and baby's eyes are drawn to it, usually starting as early as 4 months, around the time when his eyes start working together."

Not the make-up. Doesn't he know that's for *checks notes* women and the gays? Um, okay.

According to Romper: "Most babies develop a preference for their mother within 2 to 4 months of age. From birth, the combination of sight, smell, and sound likely all help babies distinguish their mother from others."

But according to ding-dong daddy, it's actually because the baby is gay.

This baby ate a banana? GAY.

He likes to look at - and touch - flowers? GAY.

What in the ever-living... is anyone else speechless?

Did this woman actually marry and procreate with the Disney villain Gaston?

You know what? Nobody knows what to say to that. 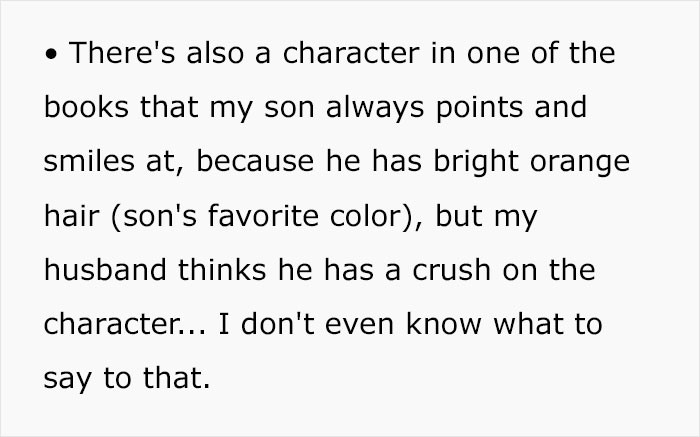 Wearing thin? How is it not totally obsolete? 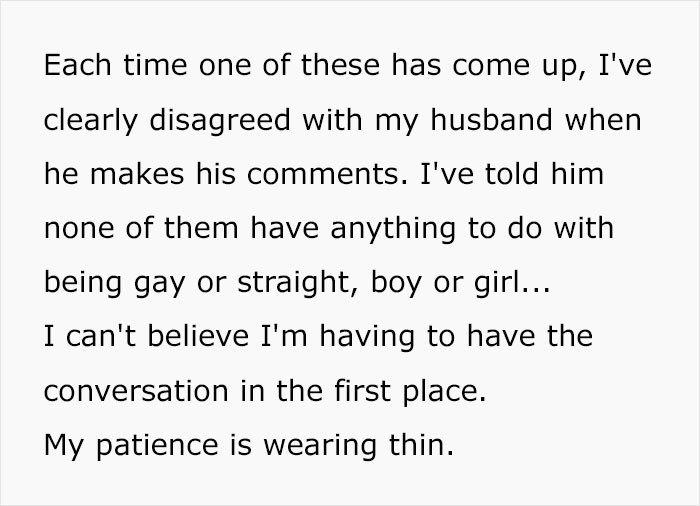 This is my patience just reading this nonsense: 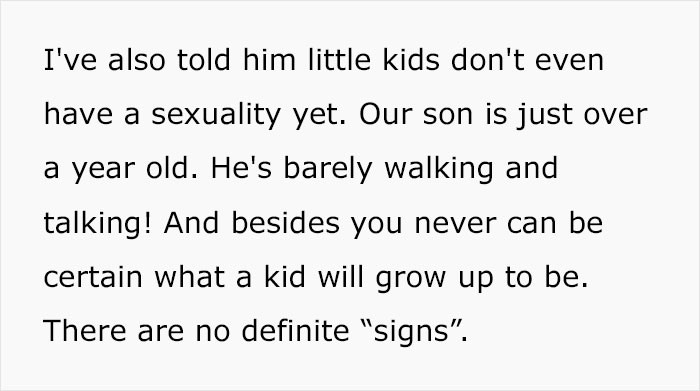 You probably WOULD like to think that, but I'm afraid you are probably missing the obvious signs that he's homophobic.

Toxic masculinity is described as: "a set of attitudes and ways of behaving stereotypically associated with or expected of men, regarded as having a negative impact on men and on society as a whole."

Girl, no, this is actually something you need to worry about! You made a baby - a whole human being - with a bigot.

This is beyond embarrassing... it's mortifying. 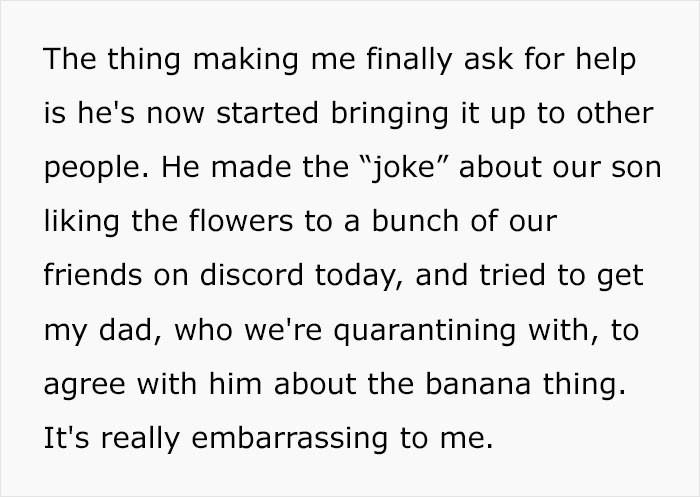 His behavior is otherwise totally on par with someone who is not a bigot, apparently. Perhaps OP is missing the hints and clues along the way?

What is this man projecting with this unusual behavior? 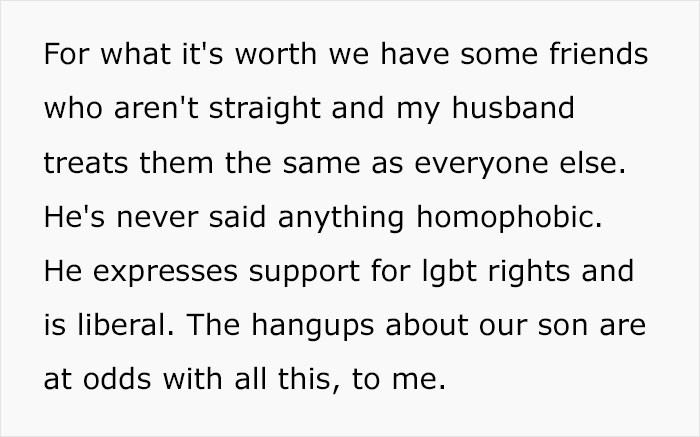 "Even though he's just a baby."

"Being straight, gay, or bisexual is not something that a person can choose or choose to change. In fact, people don't choose their sexual orientation any more than they choose their height or eye color. It is estimated that about 10% of people are gay. Gay people are represented in all walks of life, across all nationalities, ethnic backgrounds, and in all social and economic groups.

No one fully understands exactly what determines a person's sexual orientation, but it is likely explained by a variety of biological and genetic factors. Medical experts and organizations such as the American Academy of Pediatrics (AAP) and the American Psychological Association (APA) view sexual orientation as part of someone's nature. Being gay is also not considered a mental disorder or abnormality.

Despite myths and misconceptions, there is no evidence that being gay is caused by early childhood experiences, parenting styles, or the way someone is raised.

Efforts to change gay people to straight (sometimes called "conversion therapy") have been proven to be ineffective and can be harmful. Health and mental health professionals caution against any efforts to change a person's sexual orientation."

Reddit users chimed in with enthusiasm from various walks of life. 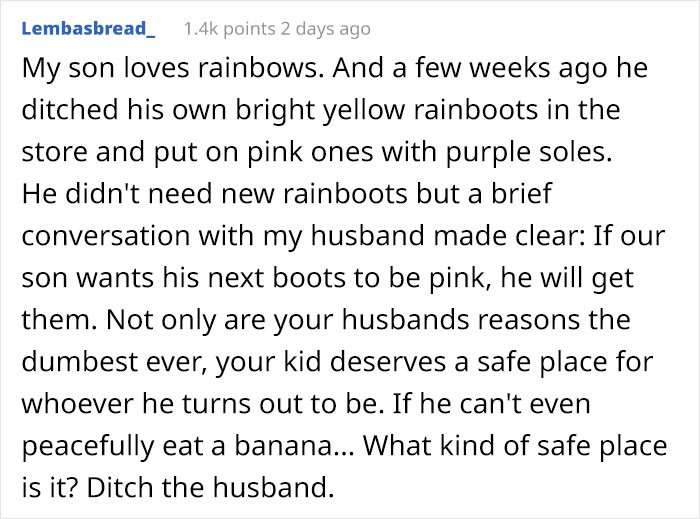 Dad definitely needs therapy, he clearly has SOMETHING to unpack... and he ought to do it before it causes harm to his child. 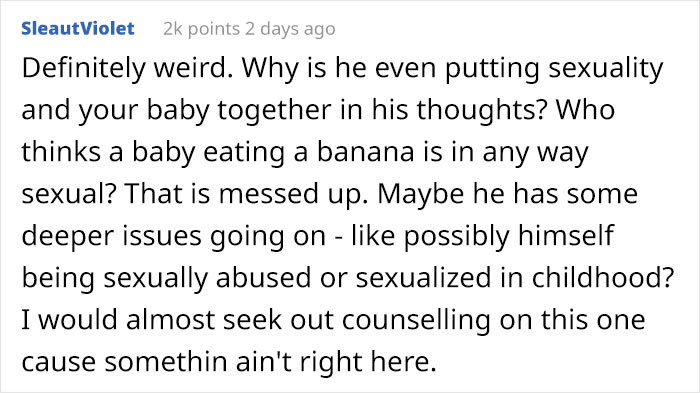 Your discomfort is rational. 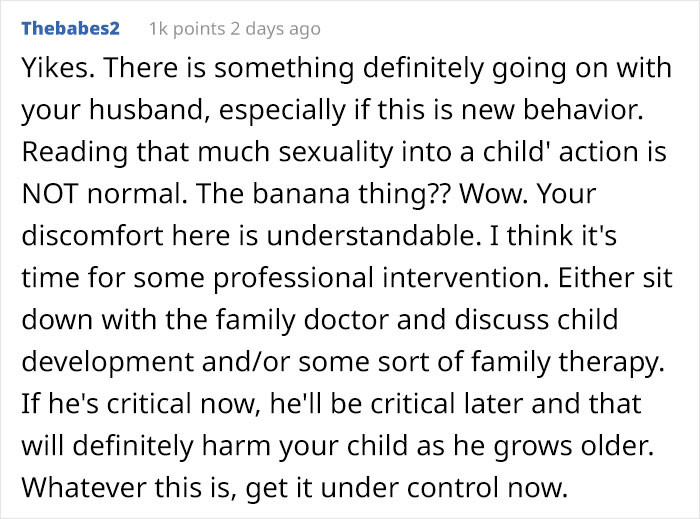 In 2018, a report from the Human Rights Campaign discovered that a whopping 78% of LGBTQ+ youth who are not out at home (meaning their families do not know they are LGBTQ+) hear their families make negative comments about LGBTQ+ people.

Kristina Furia, the executive director of Emerge Wellness and Philidelphia LGBTQ Counselling explained to TODAY that one way parents can create an open environment and sense of safety whether they know about their children's sexual orientation or not is to shut down both obvious hate speech and microaggressions as soon as they hear it. It would seem that OP's husband has a lot to learn about this concept.

Is he a closet gay? Possibly.

"Traditional societal views of masculinity have a negative impact on every member of society, but studies show they have a greater impact on the self-image, relationships, and overall mental health of gay men."

Gonna have to agree with this idea.

Sometimes people broadcast their insecurities in the worst ways.

In an ideal world, LGBTQ+ folks and their friends (and families) wouldn't have to worry about microaggressions, but the unfortunate truth is that the little things become big things and those become harmful things. We can only hope that this anonymous mom seeking support and guidance on Reddit is able to tackle this atrocious issue with her husband and a qualified therapist (or two) before it does come to the detriment of their innocent child.

Whether he is gay or not is irrelevant, the harm of perpetuating "gay" as a bad thing has negative implications that far exceed the scope of this dad's narrow view.