In 2015, it was widely celebrated that the U.S. Supreme Court legalized gay marriage. However, in 2018 it said that people also have the right to oppose it. In fact, the court ruled 7-2 in favor of a baker in Colorado who refused to make a wedding cake for a gay couple, citing his Christian beliefs as the reason.

Seemingly though, this decision has only empowered bigots to refuse service to the LGBT community on the basis of "religious freedom."

A prime example of this is Jeff Amyx, owner of Amyx Hardware and Roofing Supplies in Washburn, Tennessee. 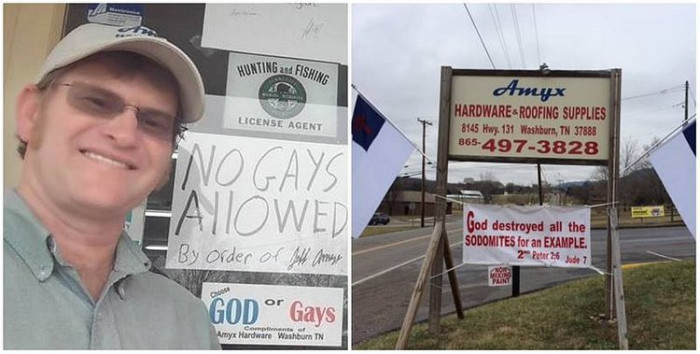 Amyx found himself in the news in June 2018 after hanging homophobic signs on the front door and windows of his store. The signs read "No gays allowed," "Choose god or gays," and "We reserve the right to refuse service to anyone who would violate our rights of freedom of speech and freedom of religion."

Doesn't he look proud?
This is Jeff Amyx, owner of Amyx Hardware & Roofing Supplies in Washburn TN.
Phone # is listed if anyone feels like giving him a call & letting him now how you feel about his new 'policy'.
Even had Tshirts made up!! #Murica pic.twitter.com/IEmVnAXhF5

Why anyone would want to turn away potential customers from their business is baffling, and members of the public were appalled by the act of bigotry.

The week after the signs were put up, people began slamming Amyx's business on Yelp.

Shortly after, Google reviewers re-categorized the business as a gay bar. 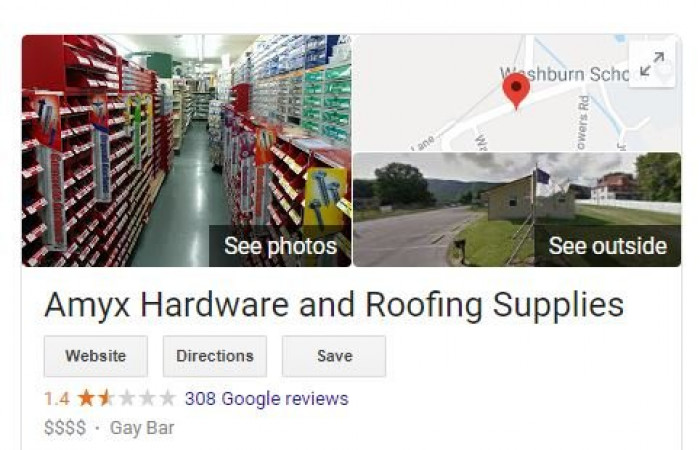 Yelp eventually began pulling down the negative reviews and made the following statement:

"This business recently made waves in the news, which often means that people come to this page to post their views on the news. While we don't take a stand one way or the other when it comes to these news events, we do work to remove both positive and negative posts that appear to be motivated more by the news coverage itself than the reviewer's personal consumer experience with the business."

Google, however, still appears to have the business listed as a gay bar and doesn't seem to have removed any of the negative reviews.

Although it is a beautiful thing for people to have the right to exercise their religious beliefs freely, surely it should not be used as a basis to discriminate against others for their sexuality.

With any luck, now that the Democrats have won a majority in the House, they may have a chance at winning the Equality Act. This bill would provide non-discrimination protections for LGBTQ people in many significant areas of life, including employment, education and jury service.