Pre-nuptial agreements are more common than you might think. They are not just reserved for the uber-wealthy either.

These types of agreements are usually arranged before couples get married and are expected to share all of their assets. "Prenups" are set up in a way to protect both parties from coming after each other's wealth in case of a divorce or separation.

One Reddit user shared a similar experience with her husband. The husband made OP (original poster) sign a prenup that their finances will be separate except for an expense account they will use for utilities.

OP cited that when they met, she was still in graduate school and, as a software engineer, he made more money than her back then. OP understood why her husband wanted to protect himself thus she signed the contract.

6 years into the marriage and OP is now a CRNA (Certified Registered Nurse Anesthetist) making $175/hour. The agreement is still in effect but neither knows exactly how much the other makes and they have no issues with that.

One day, OP told her husband that she was thinking of buying a new car. The husband seemed disinterested and told OP to get whatever she wanted.

OP decided that she will buy an Audi because it's what she always wanted. Her husband didn't know what car OP bought because he was away for a work trip.

When he got back, OP showed him the car and he was really happy for her. Later, he asked her how much she will have to shell out for monthly payments since the model is relatively new.

OP said she has no monthly payments because she paid for the car in cash.

The husband was shocked by OP's answer and asked "with what money?" OP replied that she made more than enough to pay for her car in full.

OP's husband didn't say anything else after that and OP thought that was the end of the discussion. A few hours later, the husband came back with an offer.

He said that they should void the pre-nuptial agreement. OP laughed at her husband for suggesting this and asked why they should forgo the contract.

He answered that since they are married, they should share their finances. OP replied that they've been married for 6 years without pooling their money and they've been doing okay.

She said that his sudden change in tone was very suspicious. The husband got upset and called OP a bunch of names before storming off.

He didn't come home but he did tell his family about the fight. They've been calling OP non-stop reminding her that he supported her (he was lying dear reader) while she was in school.

Most couples do have an idea about what the other makes since they share the burden of supporting the household. Of course, OP and her husband have a different arrangement and that's also okay. 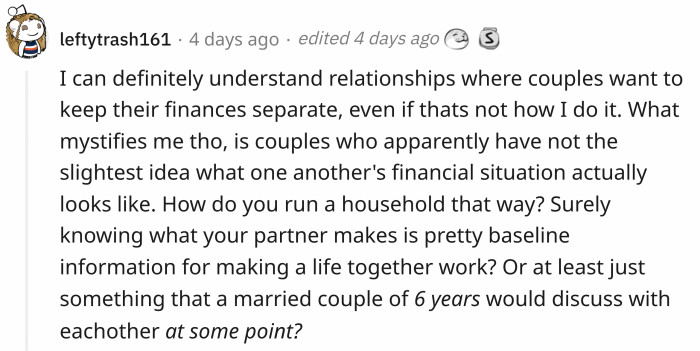 What does OP and her husband talk about? How do you plan major life decisions with this kind of arrangement? I guess that's why buying a car blew up on their faces. 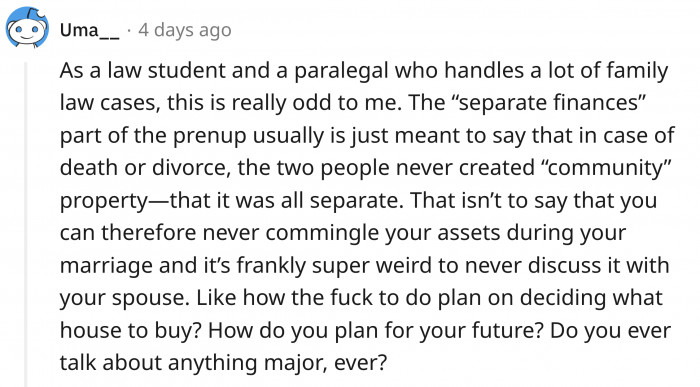 Is this an isolated incident or does OP's husband involve his family in all of their marital issues? 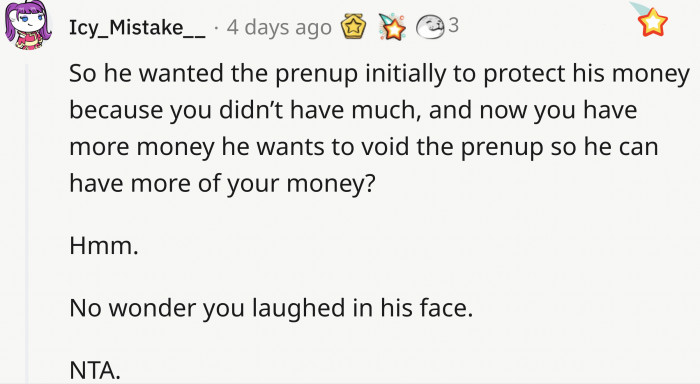 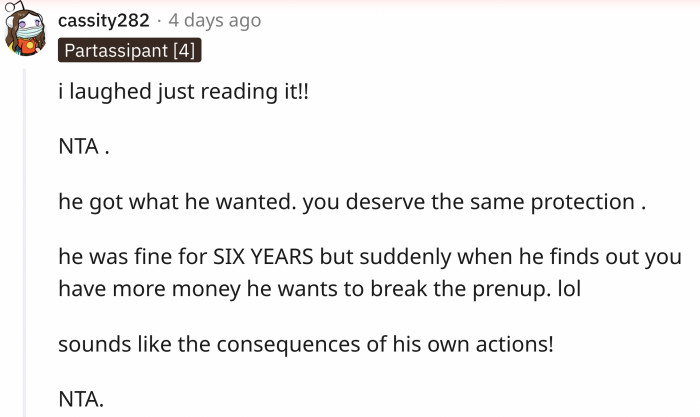 Agreed, OP should be direct when communicating with her husband

Could there be a deeper, more sexist reason for the husband's reaction?

It never dawned on him that with his wife's graduate degree, she will eventually make more money than him

Maybe add a few of your own clauses, OP

The husband was living in his own world thinking his wife will take advantage of him but it turns out, he's the one that's sus 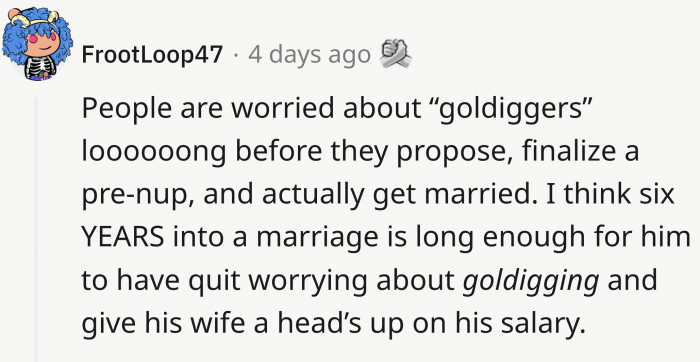 He doesn't view her as an equal that's why 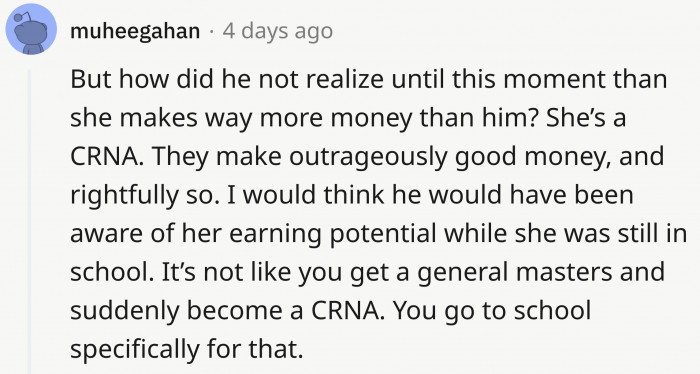 Me-thinks his ego was very bruised

People really couldn't fathom how after 6 years of seemingly happy marriage, the couple have no clue how much money they're making 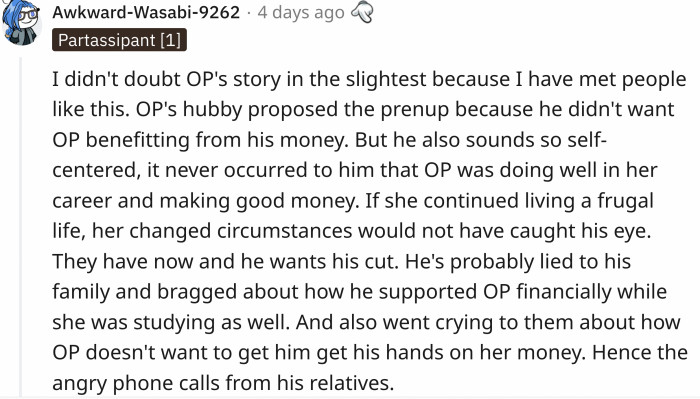 A similar situation ended a marriage 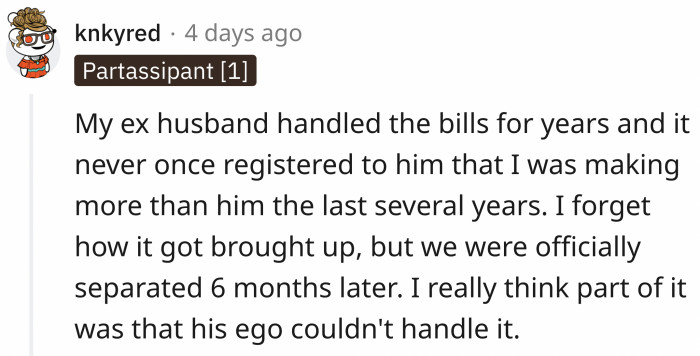 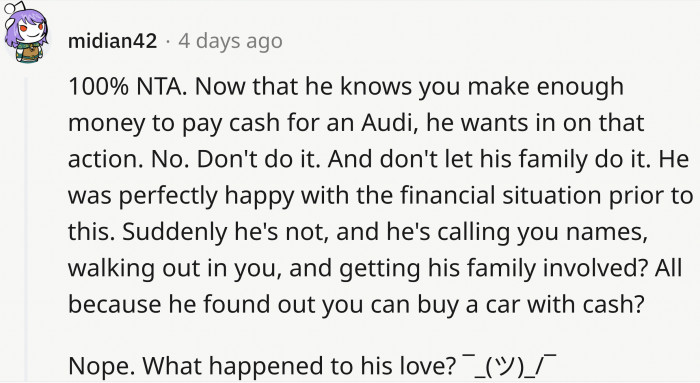 The husband will behave differently after this revelation 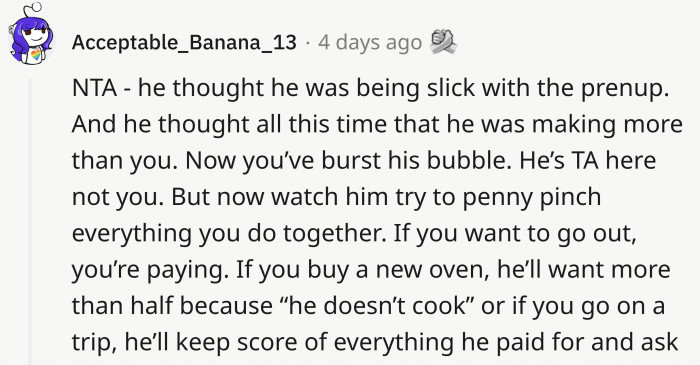 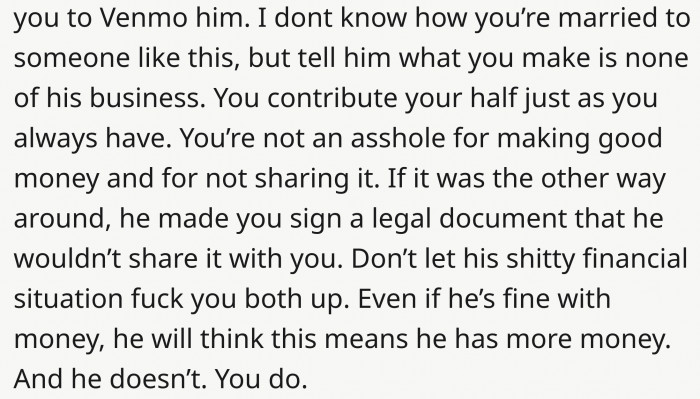 Congratulations on your new car, OP!

Because of her husband's behavior, OP initially thought that she was indeed the a**hole...

... but after reading all of the comments and feedbacks given to her, OP has a lot of serious life evaluation to do.

Money isn't everything in life or in marriage but it can rear its ugly head every now and then. Especially in OP's case where there is no clear communication about it.

It's so ironic that the husband thought OP will financially take advantage of him but in the end, he's the one with a suspicious motive. If they can't move past this issue, OP will be packing her bags in that new car of hers.