A South African man, Hector Mkansi proposed to his girlfriend, Nonhlanhla Soldaat at a KFC restaurant, and the video of the proposal was posted on Twitter in November and was shared more 5,000 times with the hashtag #KFCProposal.

The wedding planner was provided by KFC South Africa and even Uber and Audi decided to help out by offering the couple multiple ways to get around on their honeymoon. 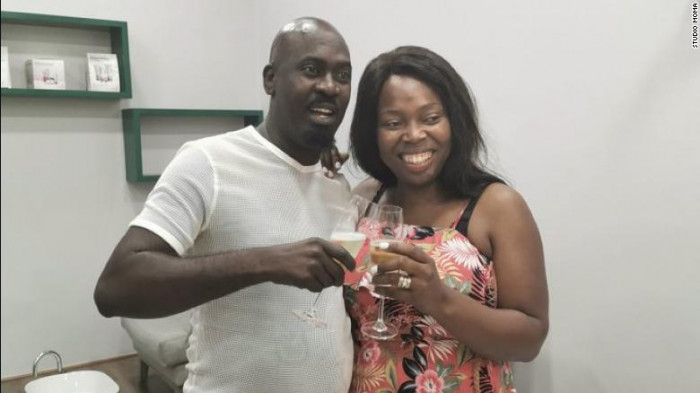 Even since Mkansi and Soldaat met at a funeral in 2010, they have been pretty much inseparable.

In 2012, they did a small ceremony where they tied the knot, but Mkansi, who is a pastor, explained that it was far from being their dream wedding.

"In 2011 our families began lobola negotiations (dowry) and in 2012 we got married in a small traditional ceremony as that was all we could afford at the time... We had the ceremony but I knew this wasn't what my wife and I wanted," Mkansi told CNN.

The reason why Mkansi decided to propose a second time is that he was not happy with the rings he got for his wife the first time, so he decided to get her new ones. He then surprised her with a proposal at their favorite spot, KFC. 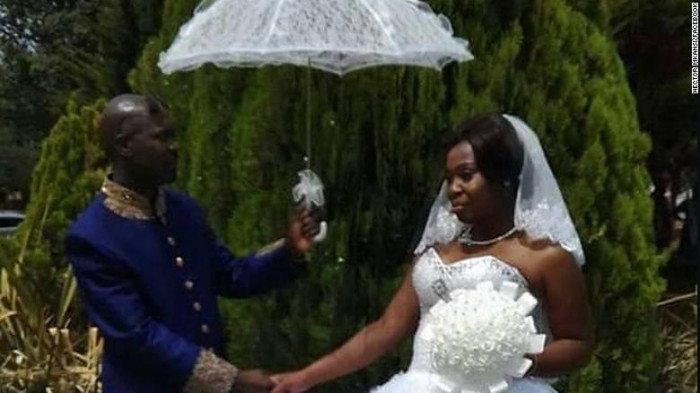 "The team at the restaurant was surprised at the request but they were helpful in creating the big moment. We received our meals and when she looked inside, she found the rings and that's when I went down on my knee," he said.

The couple had no idea that someone caught their special moment on camera and shared it online. The reactions to the video weren't all supportive and one woman even mocked Mkansi and said that South African men "are so broke".

However, the positive responses quickly drowned the negative ones.

"We didn't even know about it (negative comments) until much later, we are not really bothered by that," Mkansi said. 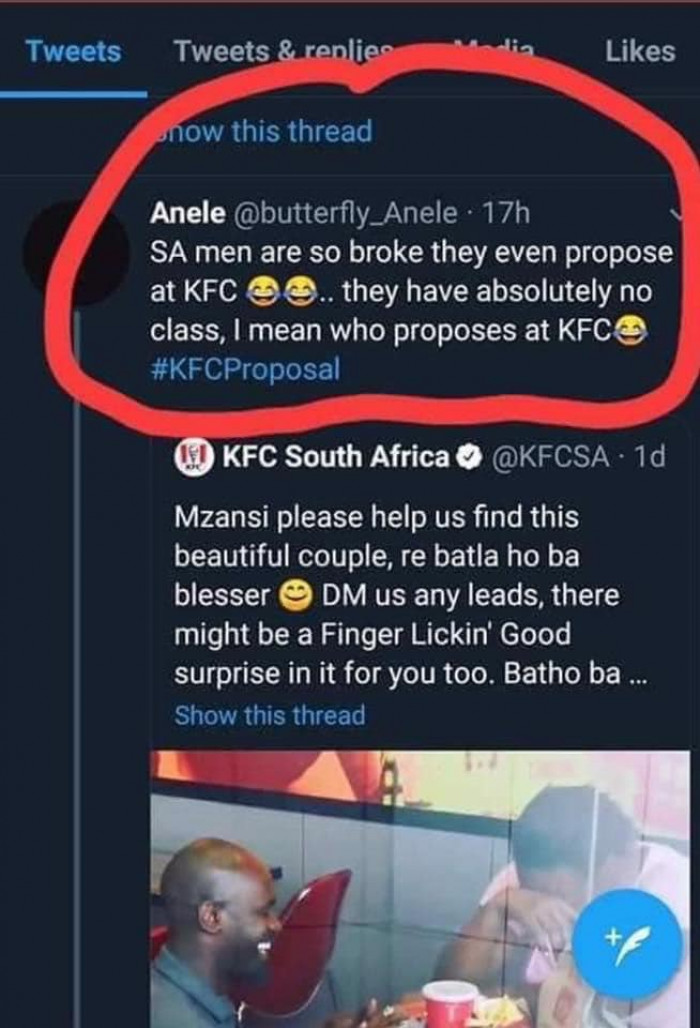 When KFC South Africa found out about the couple, they decided to help:

South Africa, you guys are amazing! We’ve found the beautiful couple, and looks like we’re having a #StreetwiseWedding y’all 🥳 We’re meeting Bhut’ Hector and his lovely bride Nonhlanhla we’ll keep you posted. #KFCProposal

These honeymoon destinations look far. Someone needs to drive them there. We got you.😉 #KFCProposal https://t.co/oiOMWX48Zp

Brands like Audi and Lexus also offered to help the couple travel more comfortably. Airlines Kulula and Mango also pledged to fly the couple to their honeymoon destination.

Fellow South Africans also offered to chip in to help pay for the couple's wedding, which includes jewelry, spa treatment, and home furniture.

"We are still in disbelief, both of us have to ask each other if this is really happening from time to time. We couldn't be more grateful to God and every single person that has shared in our little love story," he told CNN.

Mkansi said that this is truly the wedding of their dreams

"Our dream has come true, we never in a million years thought something like this would happen to us."

Even more companies wanted to help: 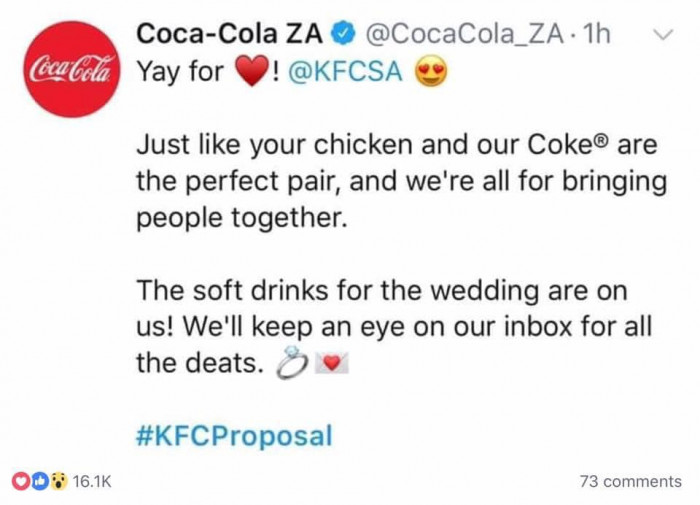 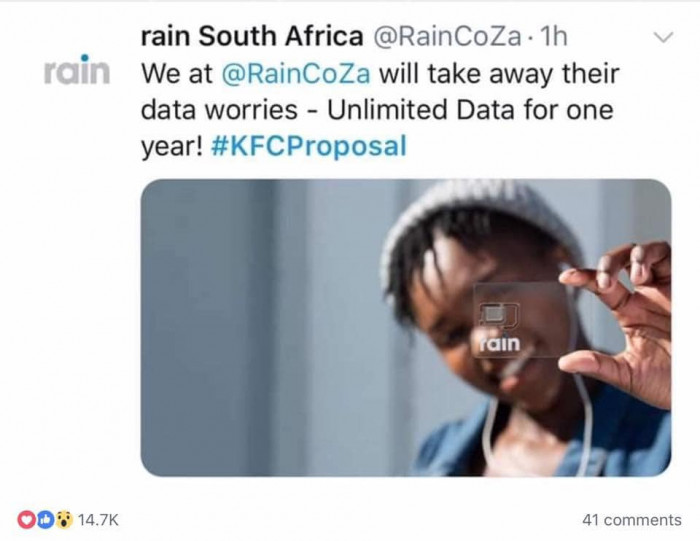 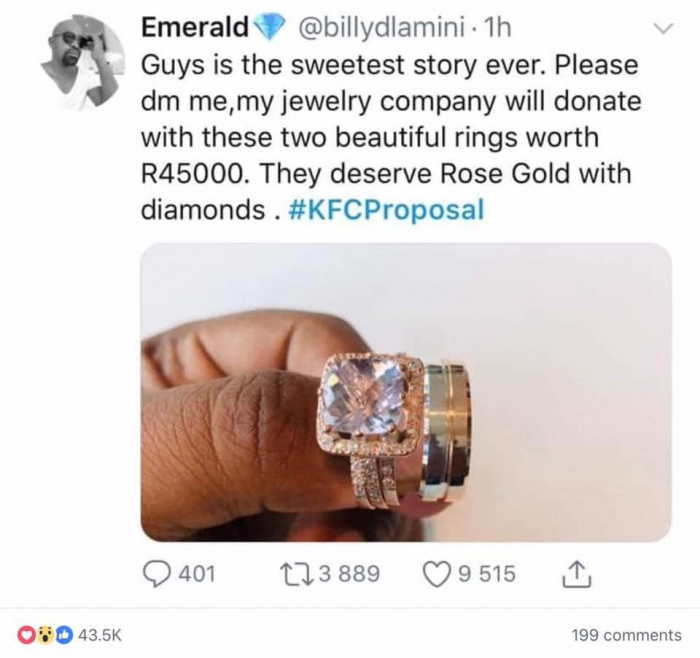 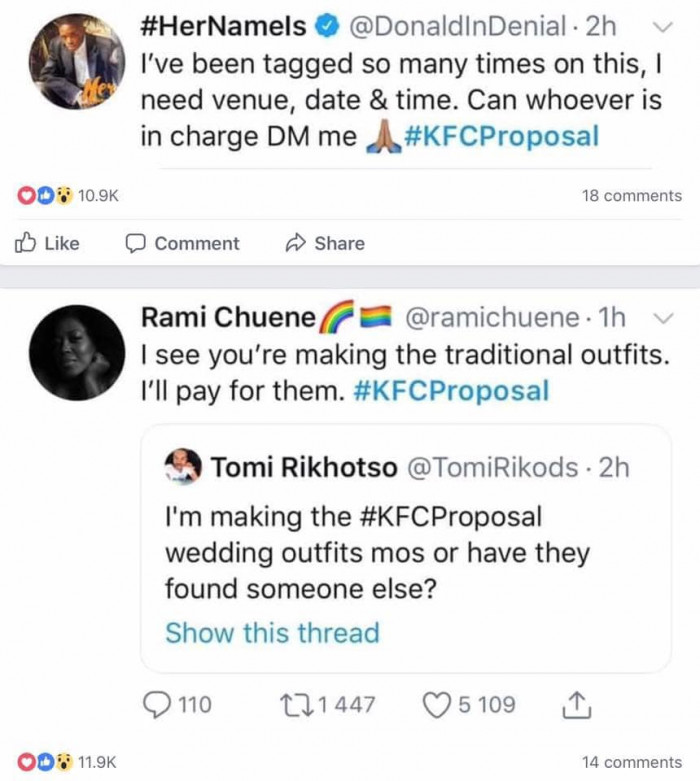 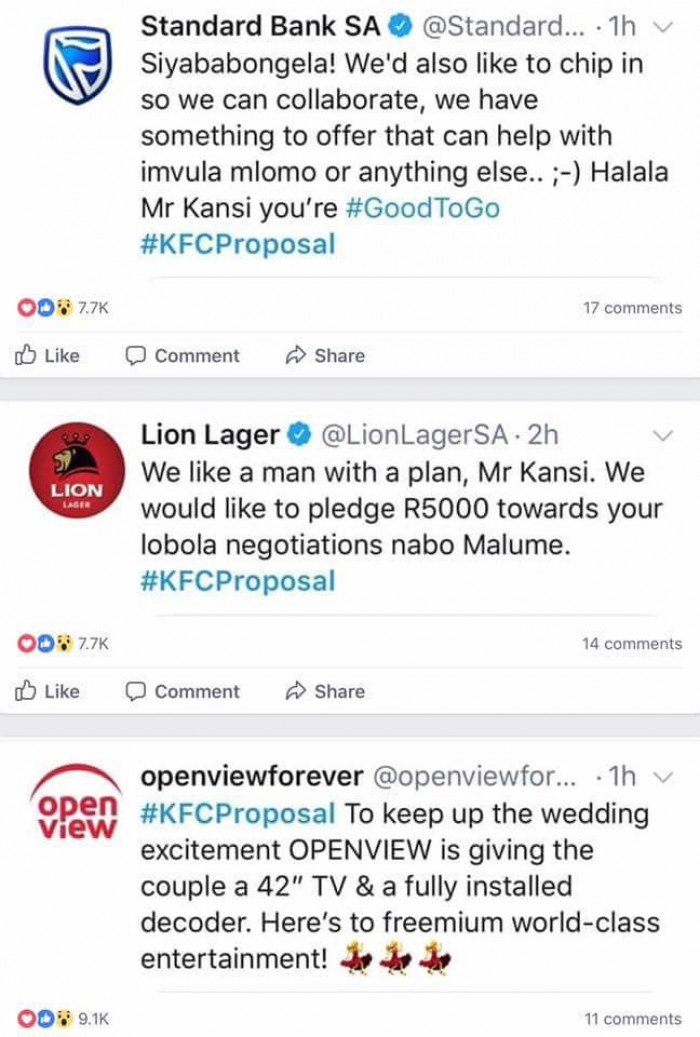 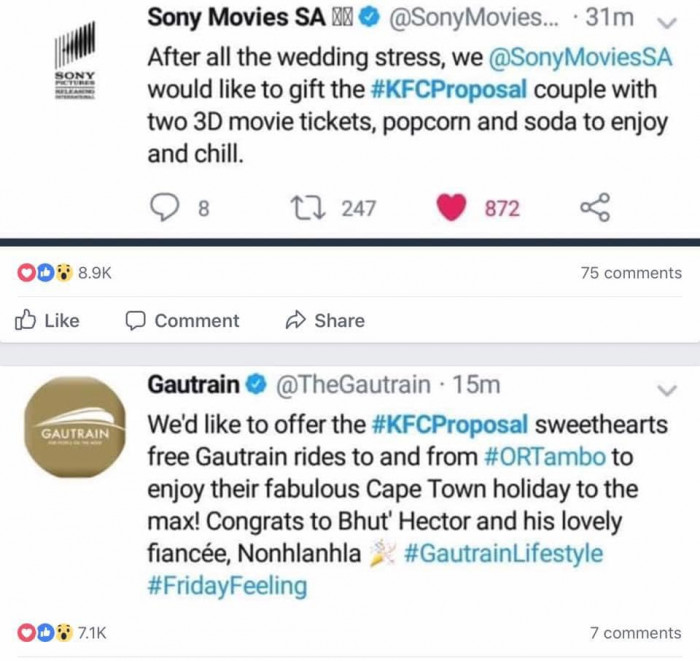 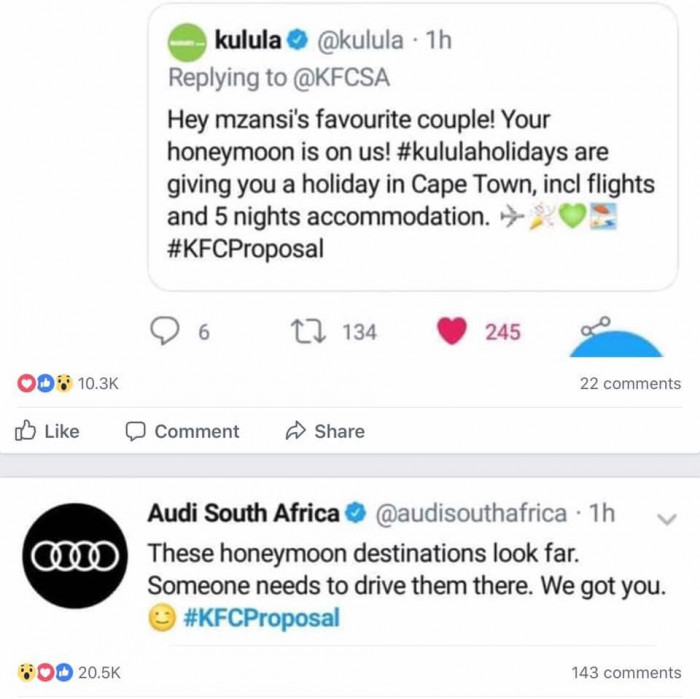 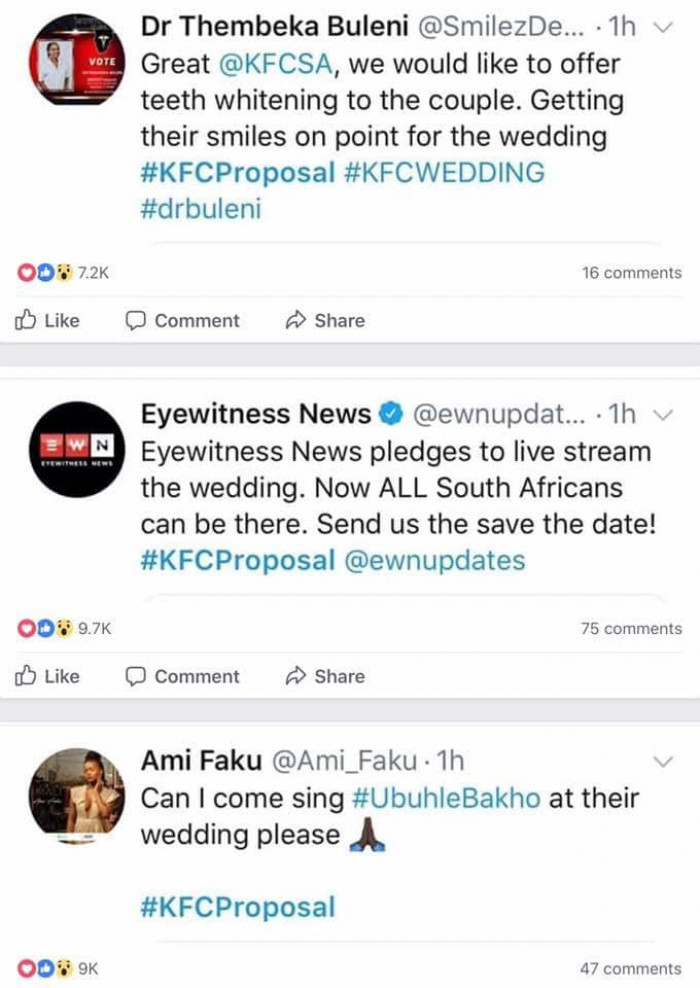 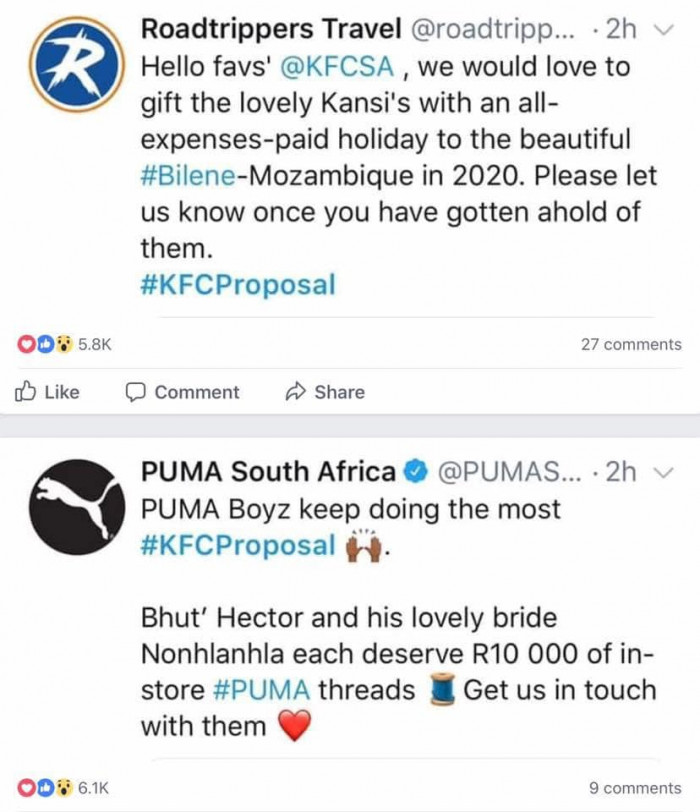 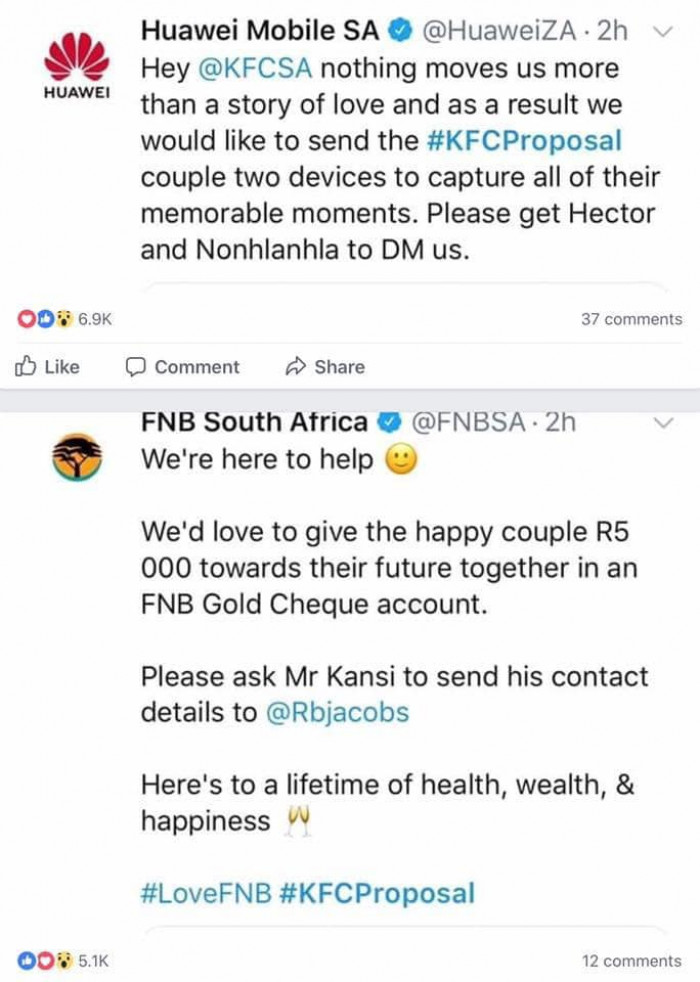 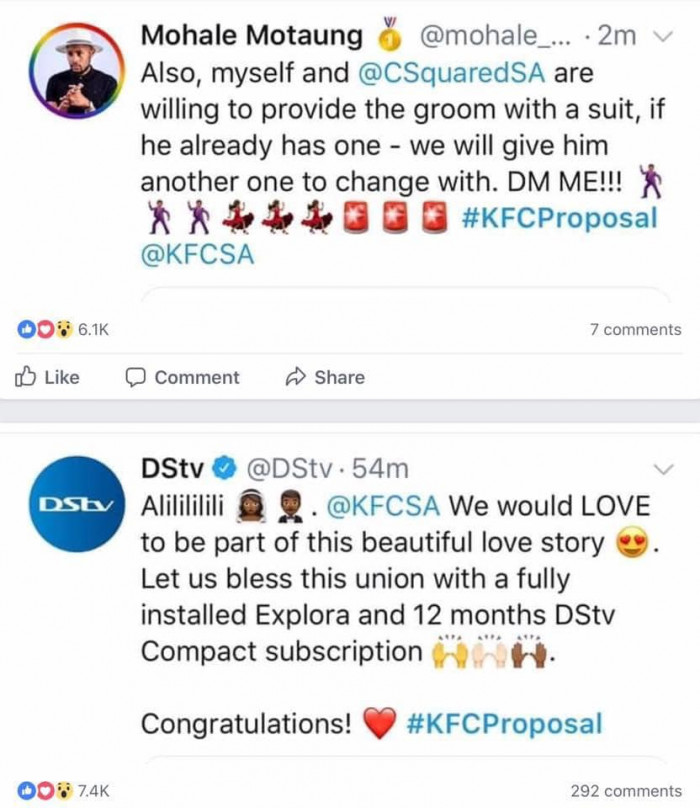