By now, you will more than likely be aware of the controversy singer Lana Del Rey caused recently by wearing what seemed like a see-through, mesh face mask to a book signing.

People were quick to call out the singer online for making such an irresponsible fashion choice during a global pandemic. And matters were only made worse when photos and videos started to circulate, of the singer getting up close and personal, posing with fans.

People's outrage is understandable, considering that the United States has been hit extremely hard by the pandemic. Residents are required to wear face masks in public and crowded indoor areas as a matter of safety.

Doctor and medical researcher Iris Gorfinkel made this comment regarding the use of face masks. "Masks are helpful because they block large and fine droplet particles that the virus can cling to," she said.

"They're helpful for blocking not just COVID-19 but other viruses as well, including influenza."

"In fact, a study done in Thailand looked at more than 1,000 people and found that those wearing a mask during high-risk exposure reduce the risk of getting infected by 70%. That's seven zero," Dr. Gorfinkel continued. 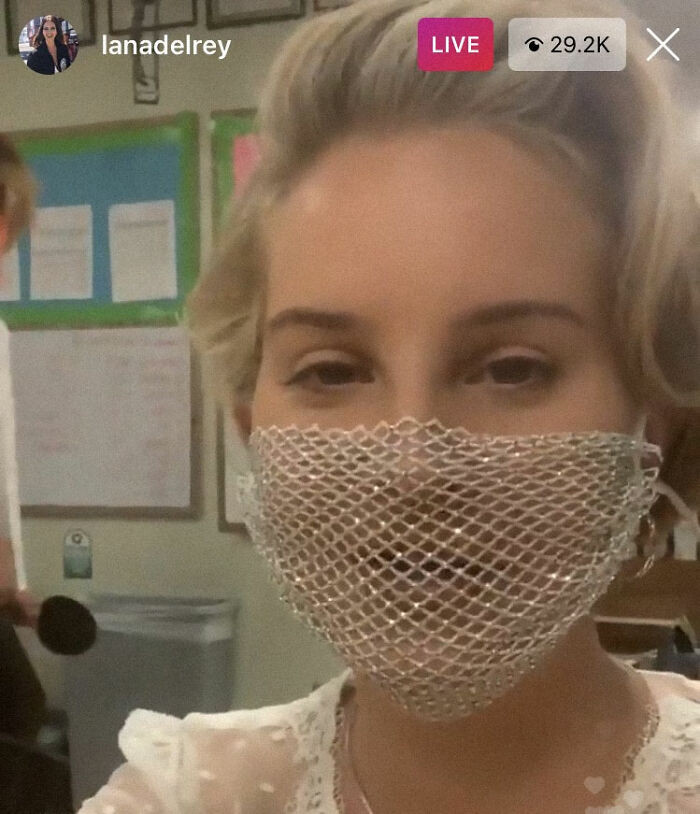 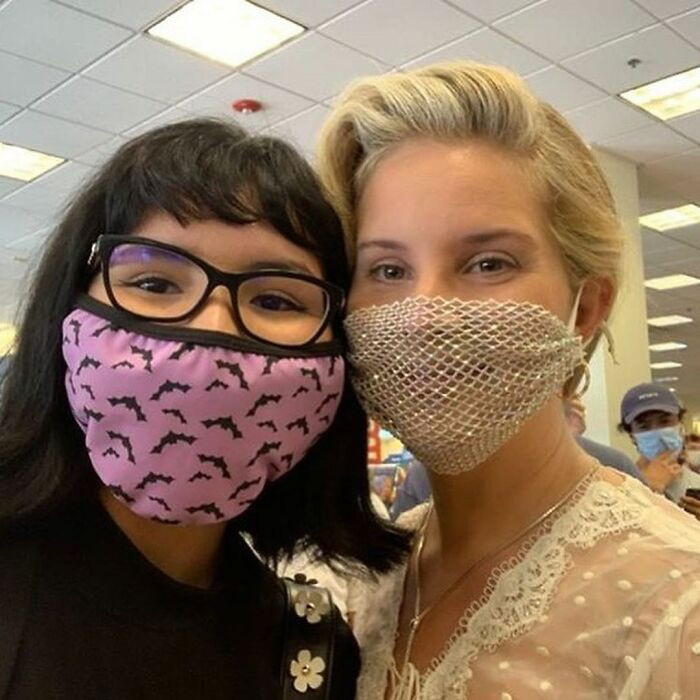 However, it's pretty obvious that a mesh face mask would not achieve those things. Respiratory droplets are minuscule, and it would be easy for them to be transmitted through the holey fabric. 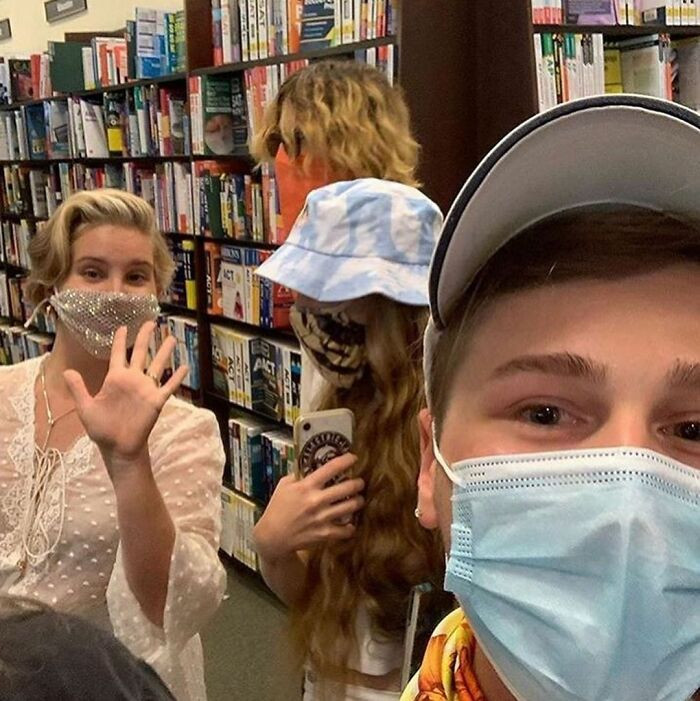 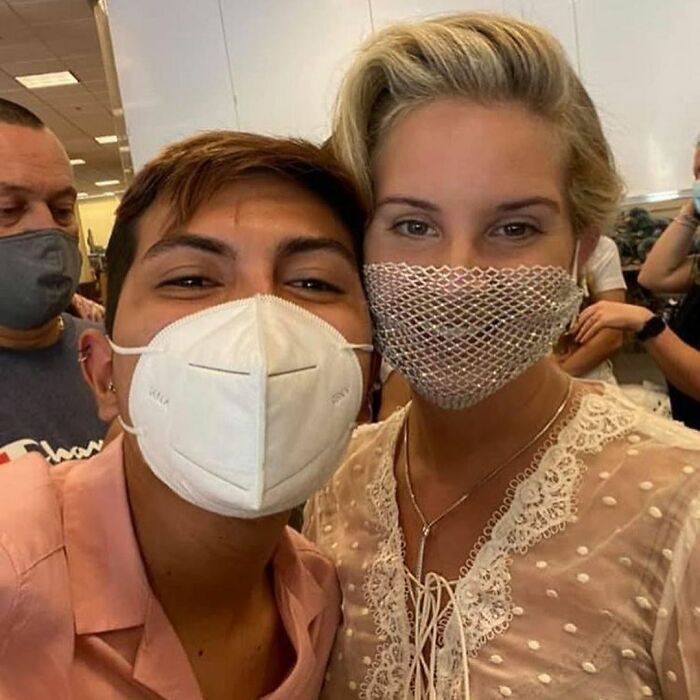 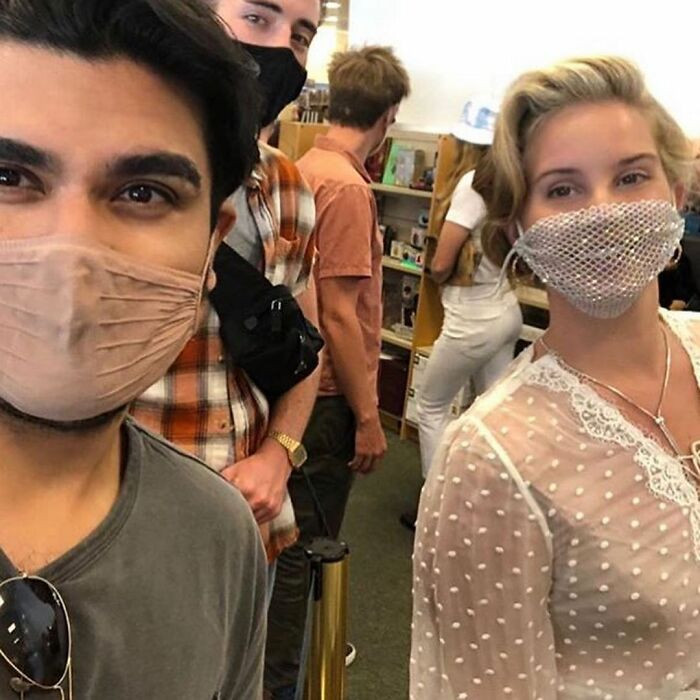 Dr. Gorfinkel says that as a general rule, a higher thread count means a more effective mask. "Three layers are best," she says.

"Basically, the rule is to do the best you can with the thickest material you can get. Masks with valves allow droplets through, so those are not recommended."

"Neck gators are also not quite good. You basically want to have something that fits around the face so that it's comfortable," she explained. 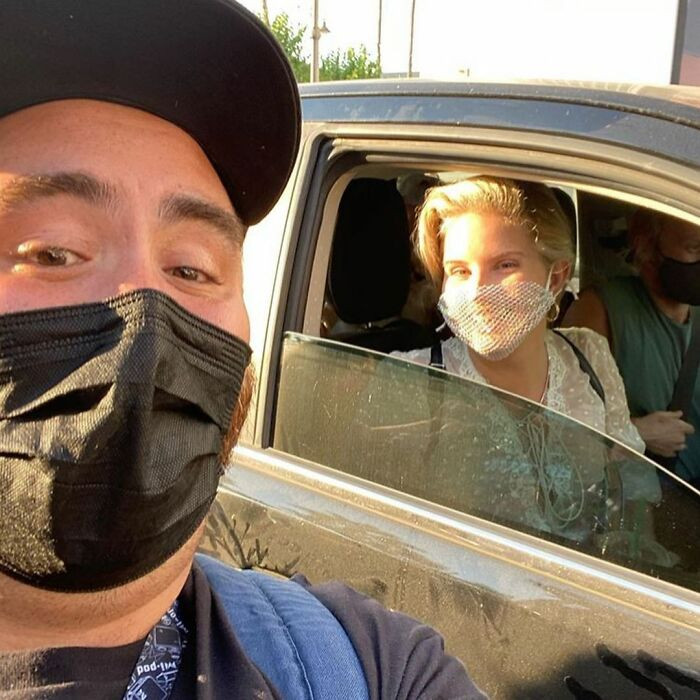 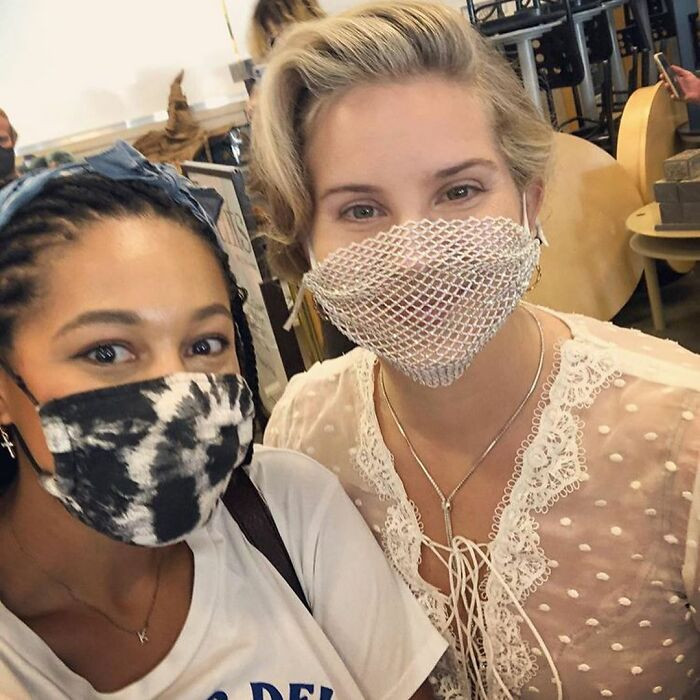 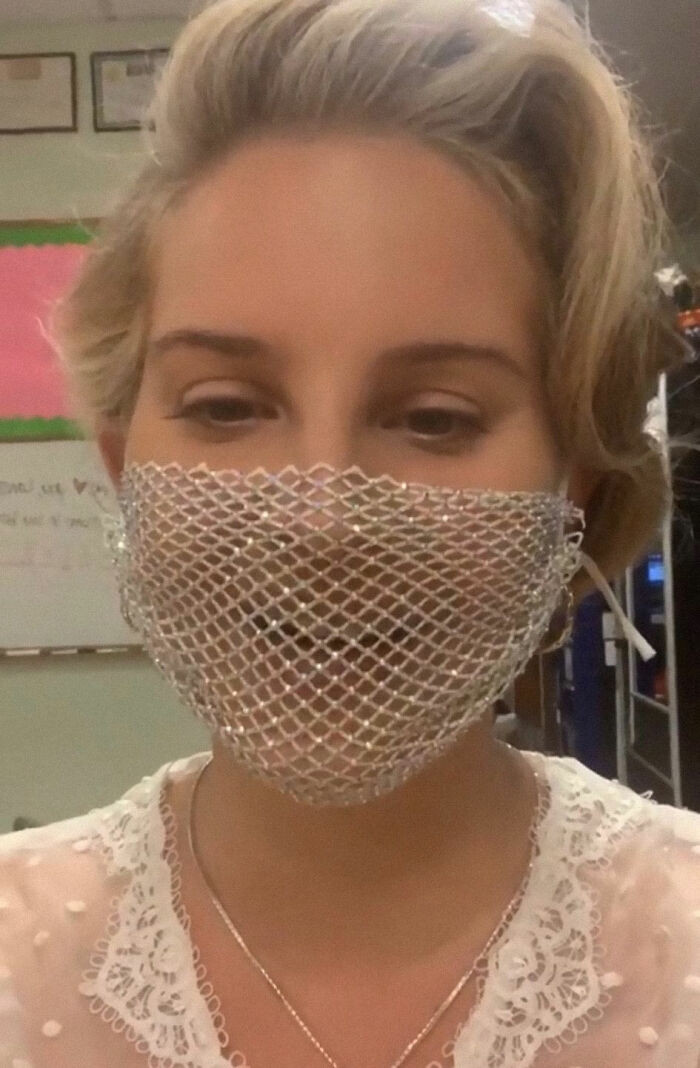 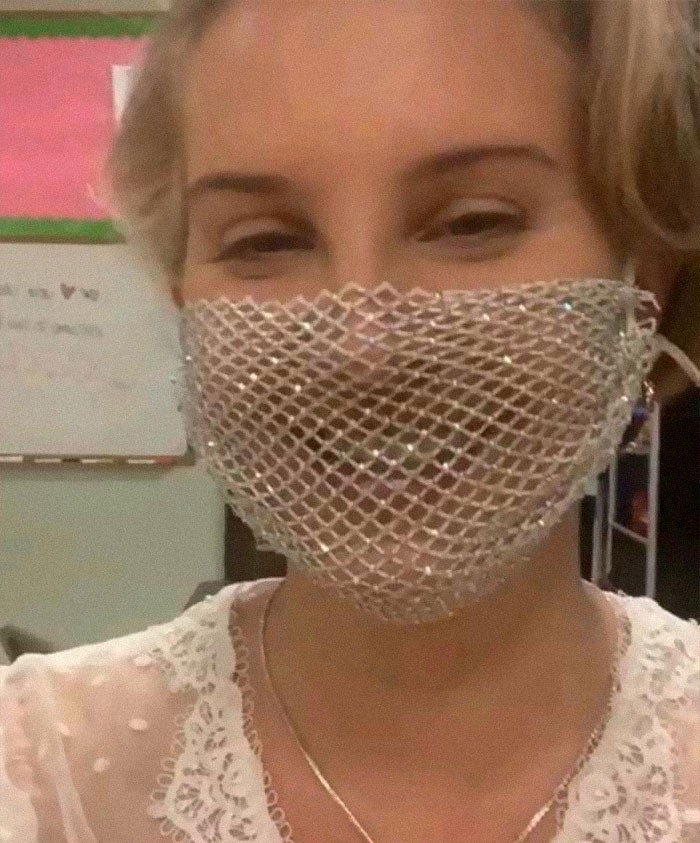 Lana appeared on the cover of Interview magazine in September, wearing a very similar mask. 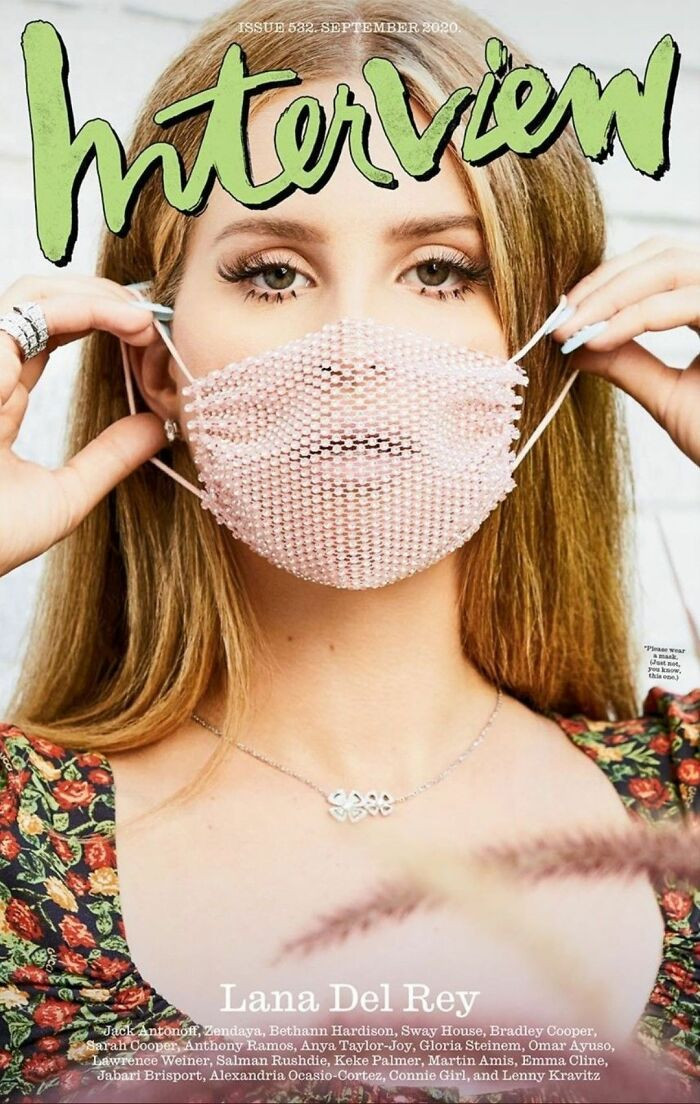 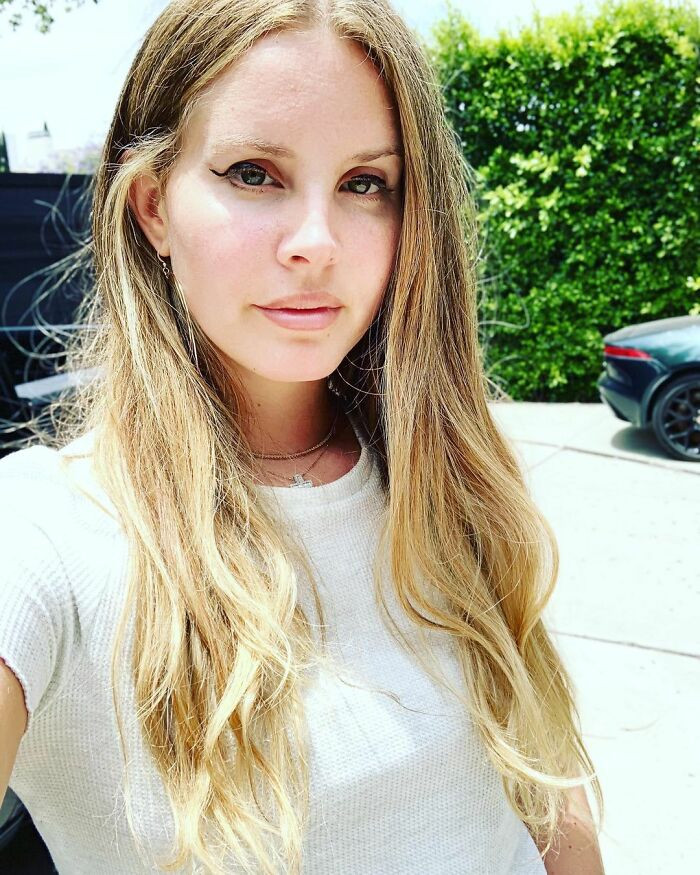 Del Rey's choice of face mask has certainly managed to stir the pot. The controversy eventually prompted Madeleine Virginia Gannon to write an article about it for the Michigan Daily. 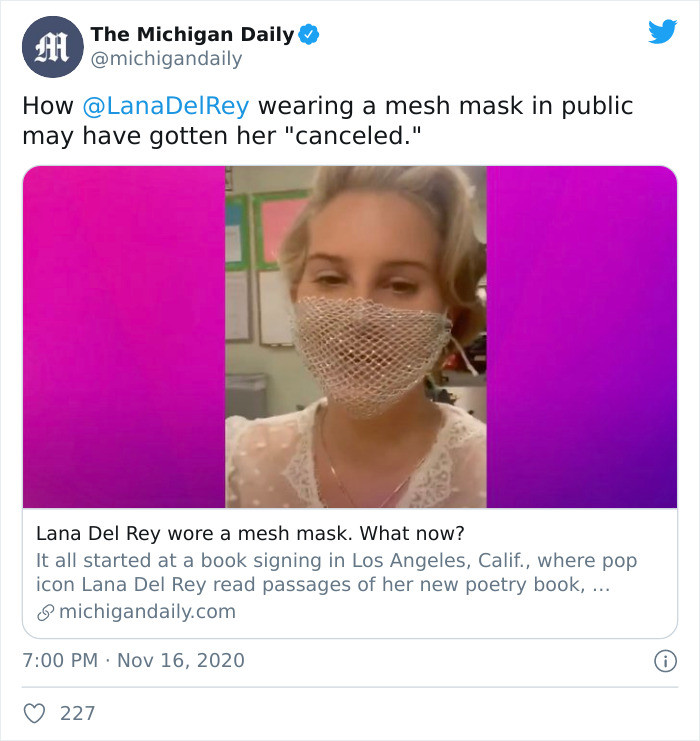 Lana read the article and decided to post a response. "The mask had plastic on the inside. They're commonly sewn in by stylists these days," she explained. 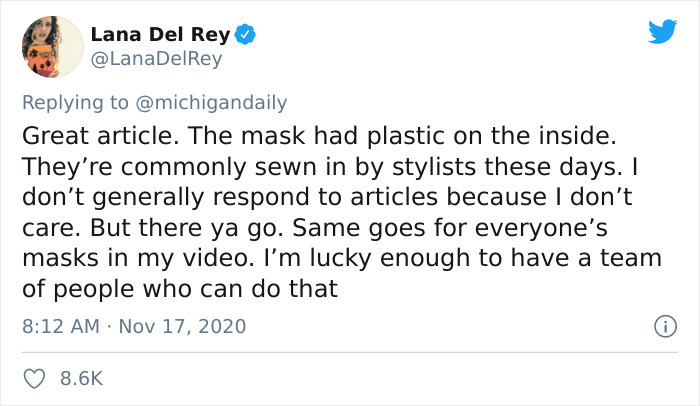 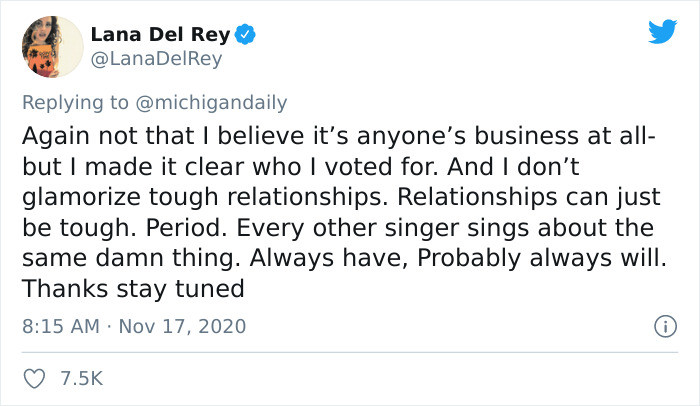 But even after her long-awaited response, people still weren't happy. They wanted to know why it took Lana so long to comment on the matter.

Lana explained that too.

But Lana's loyal fans have her back no matter what.