Hugh Nini and Neal Treadwell are a couple from Texas, USA who spent years scouring and scavenging thrift stores, estate sales, antique malls, and flea markets for photographs. Not just any photographs of course, they were on the hunt for pictures of men that were romantically involved.

What started out as an accidental discovery over time led to the couple collecting 2,700 photos (all taken between 1850 and 1959) which they sorted diligently though for the best of the best. Then, they put together a beautiful book with 300 of those beautiful photos called LOVING: The First 1,000 and are selling the first 1,000 books as a part of a fundraiser.

"Their images evoke as powerful a sense of love and humanity as has ever been filmed, or written about, or acted out on a stage." 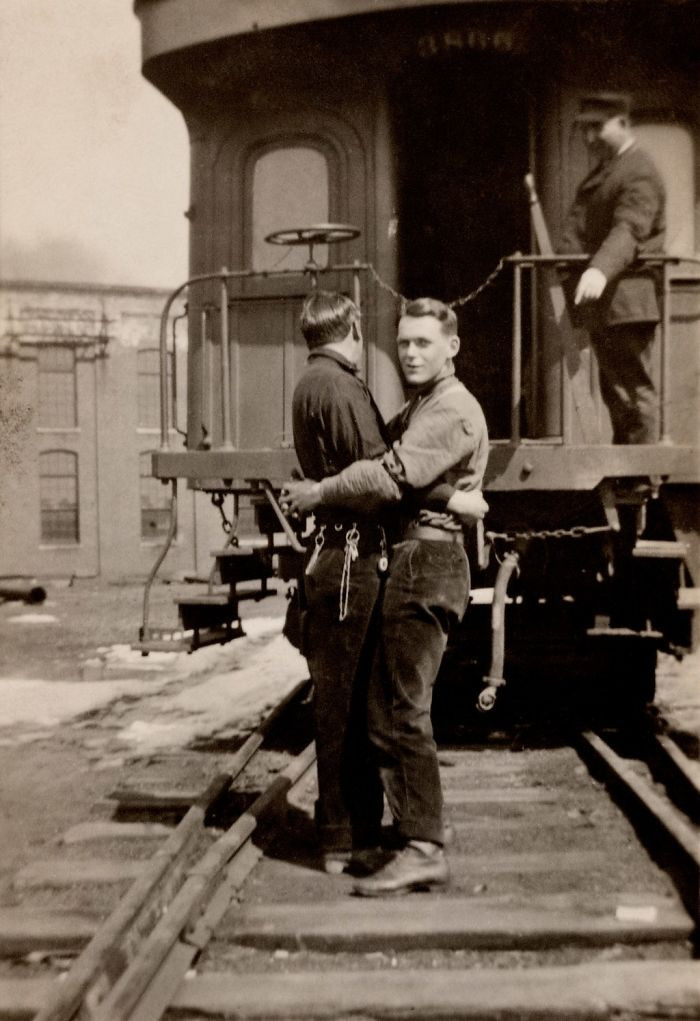 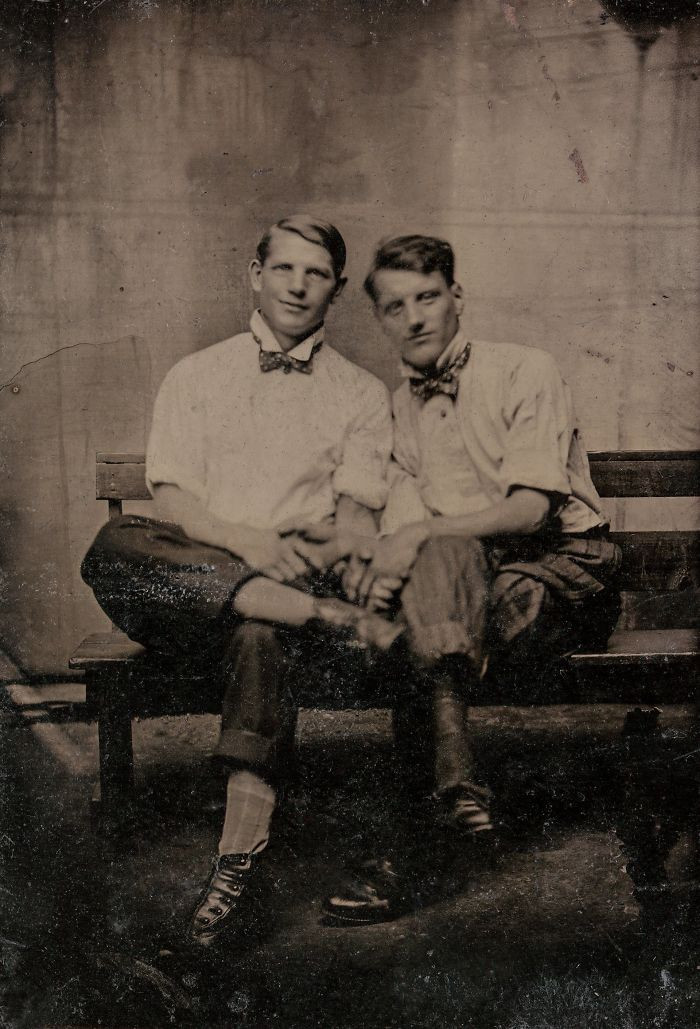 Nini told Esquire that military couples make up as much as 20% of their collection:

"Military couples, from all over the world, make up a disproportionate number in our collection. It makes sense,. If you were a man who is destined to fall in love with another man, the military was a good place to be.” 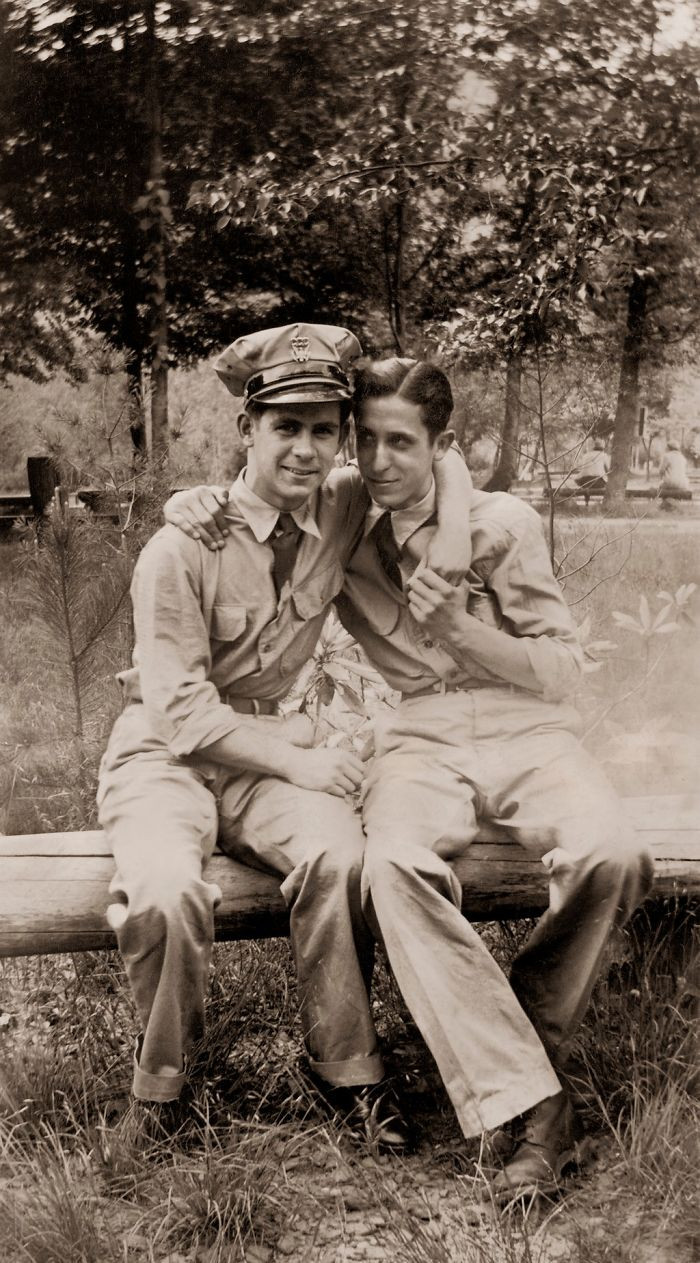 "Taking such a photo, during a time when they would have been less understood than they would be today, was not without risk." 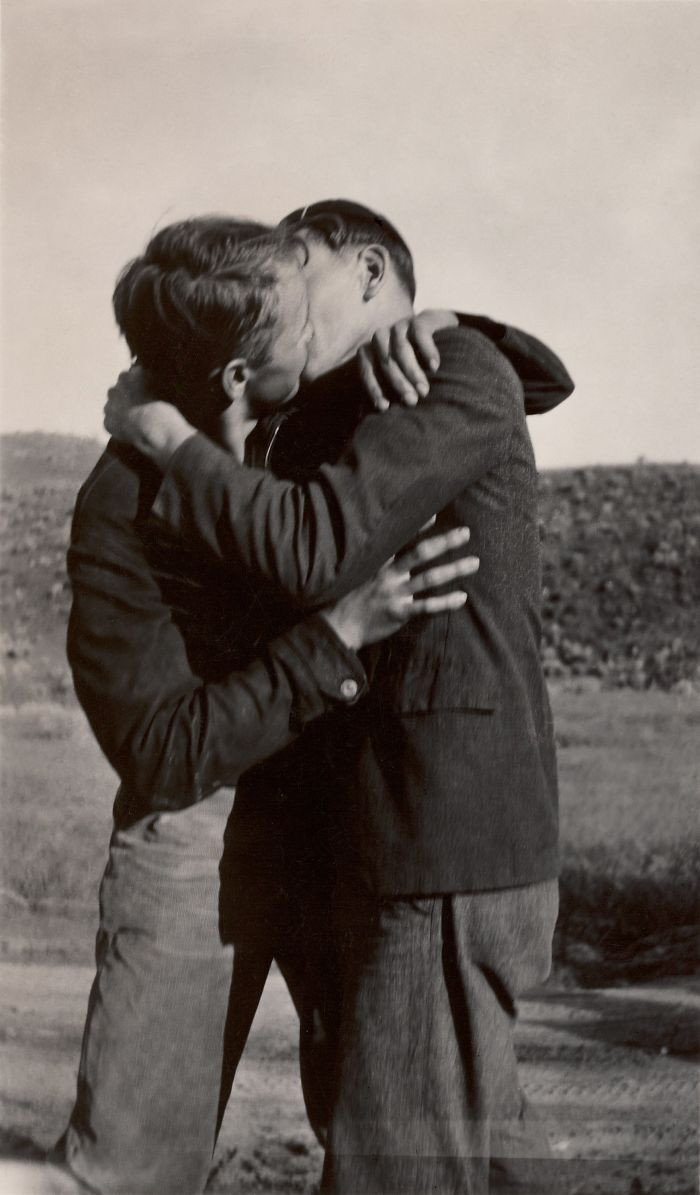 "Surely, these couples couldn’t have imagined a day when their secret photographic testament would become an entry in a book that celebrates them and the deep feelings of love that they had for one another.

We’ve only recently begun to imagine it ourselves." 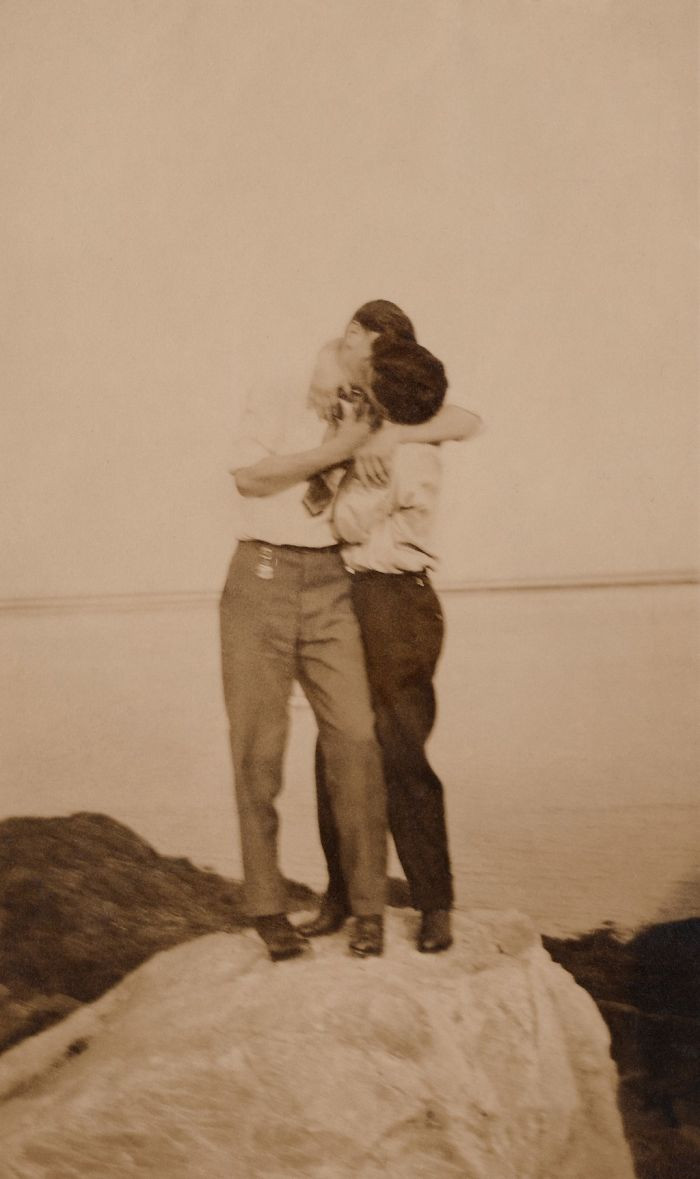 "Patterns emerge. One unexpected recurring theme is that beginning sometime in the mid 1800s, and continuing into the late 1920s, posing under an umbrella together was a signal that the two men were engaged in a romantic relationship. When we acquired our first “umbrella” couple we only chose it because they had “that” look in their eyes. Somewhere around the fifth umbrella photo we came to understand that this was a deliberately coded message that crossed borders and time. We have about 50 “umbrella couples” now." 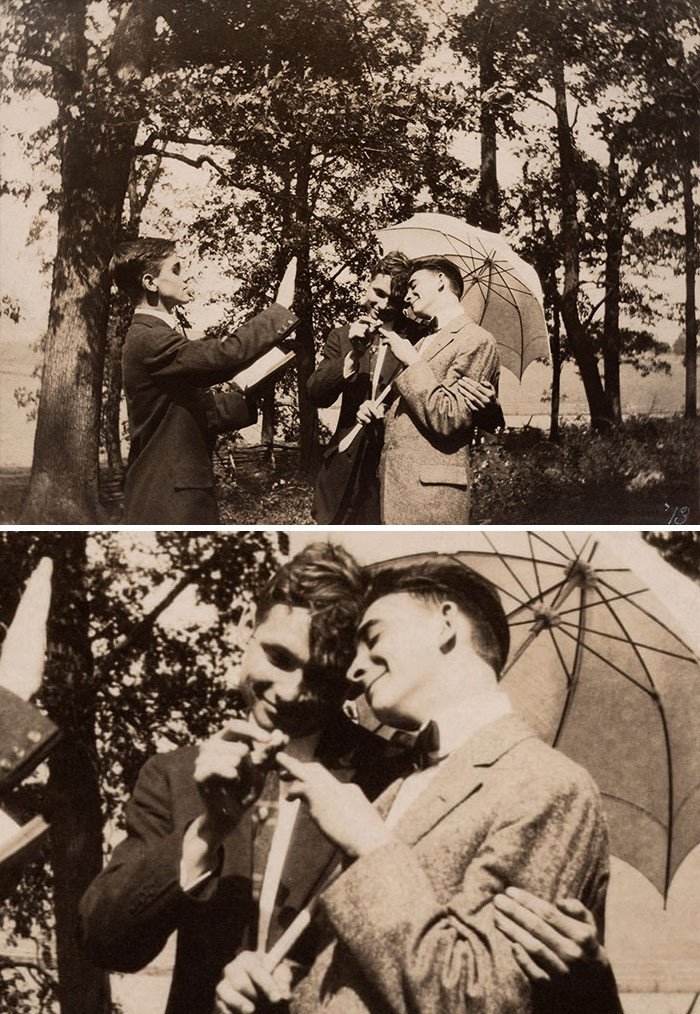 Curiosity was sparked. They said:

"We were intrigued that a photo like this could have survived into the 21st Century. Who were they? And how did their snapshot end up at an antique shop in Dallas, Texas, bundled together with a stash of otherwise ordinary vintage photos?" 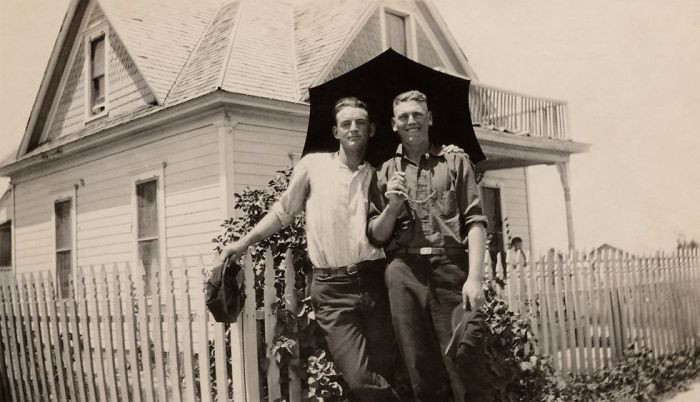 According to an article on the couples' book in VICE, Hugh and Neal were not able to legally marry at the time they found their first photograph. They were married in the first US state to legalize same-sex marriage, Massachusetts, in 2006. 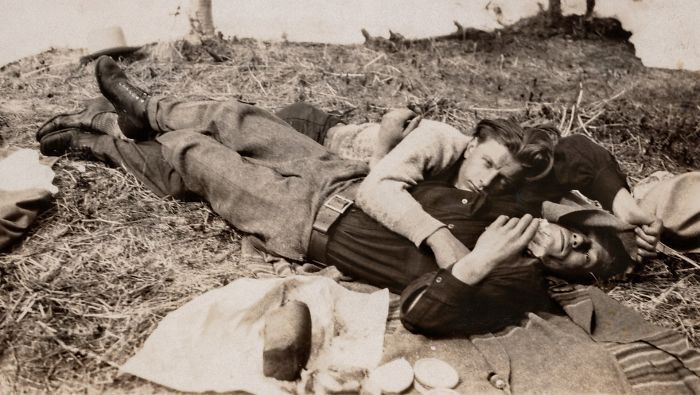 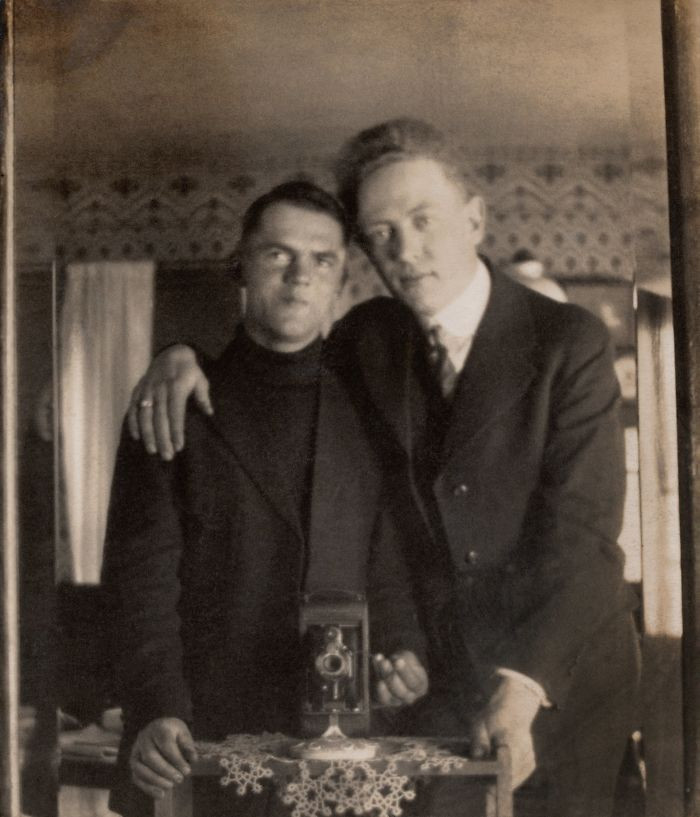 Many people throughout time have looked at photos and paintings of same-sex pairs and often dismissed whether the pair was romantically involved, so Neal and Hugh had a strict set of rules for adding a photograph to their collection:

"Sometimes the embrace leaves no doubt that the relationship exceeds friendship or fondness. But if in doubt, we look into their eyes. There is an unmistakable look that two people have when they are in love. You can’t manufacture it. And if you’re feeling it, you can’t hide it. In one instance our self-imposed guidelines were put to an unexpected, and successful, test." 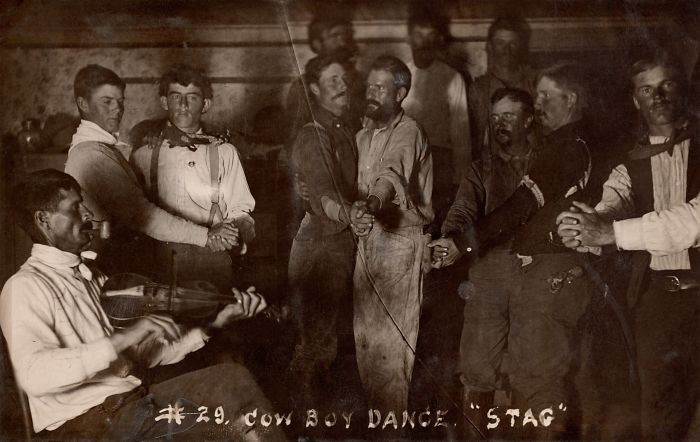 "Our collection started 20 years ago when we came across an old photo that we thought was one of a kind. The subjects in this vintage photo were two young men, embracing and gazing at one another - clearly in love. We looked at that photo, and it seemed to look back at us. And in that singular moment, it reflected us back to ourselves." 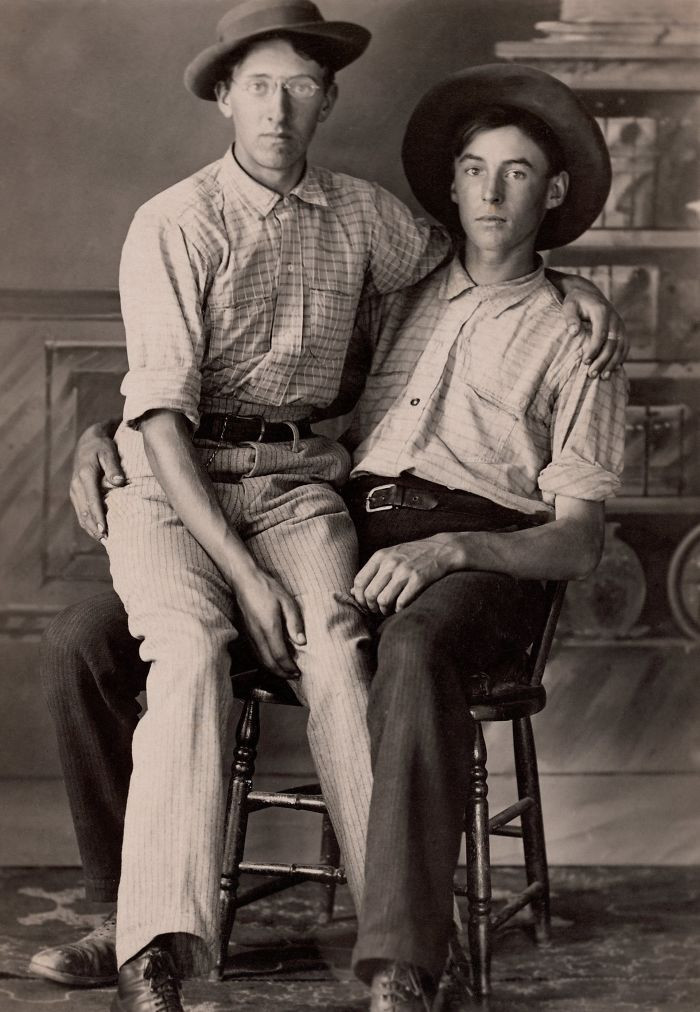 It was an entire year later that the real journey began, though:

"About a year later we came across a second photo through an online auction. It was a miniature portrait of two soldiers from the 1940s, approximately the size of a man’s thumbnail. They were posed cheek to cheek, and their photo was in a small art deco glass frame with “Yours Always” etched into the glass. They had that same unmistakeable look in their eyes as the first photo we’d collected so many months before. We thought we had now found the second, and last remaining, vintage photo of two men, like ourselves, who were in love. Thus began a twenty year journey that neither of us saw coming; much less planned. " 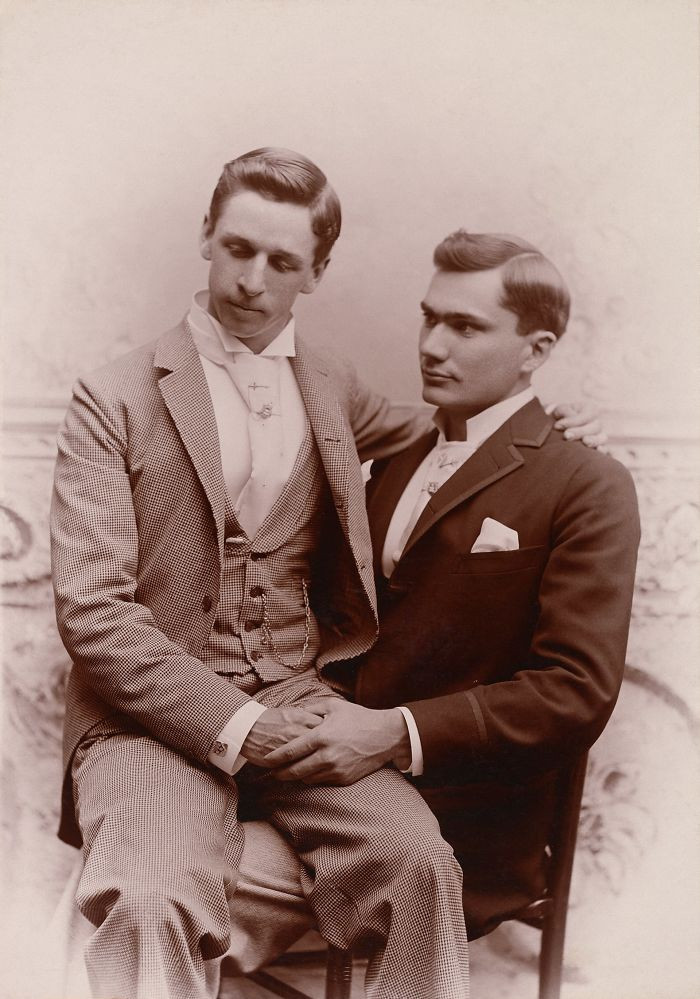 "As the years and photos accumulated, we began to feel a sense of obligation to share them with others. That said, strangely, though we have many good friends, and loving and supportive families, we never shared this collection with anyone until fairly recently. Our reason was simple. We didn’t think anyone besides ourselves would find them interesting." 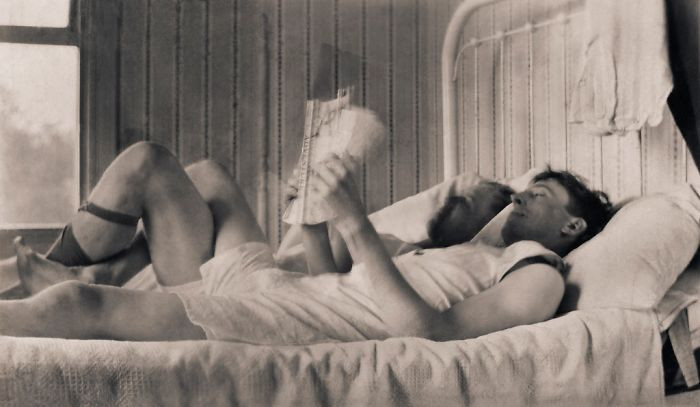 "Challenging boundaries, universal in reach, and overwhelming in impact, LOVING speaks to our spirit and resilience, our capacity for bliss, and our longing for the shared truths of love." 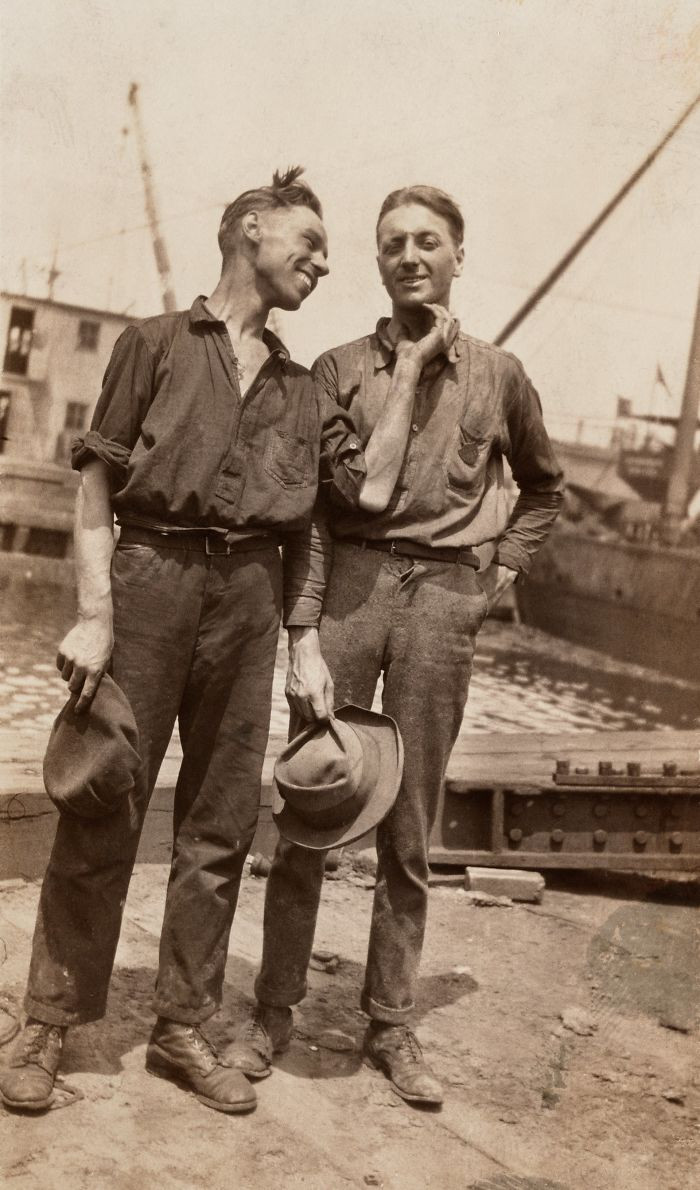 "Beyond their message of love, they seem to be calling out, saying; “We mattered to one another and we wanted to memorialize our feelings through a photograph. Even if only for ourselves.”" 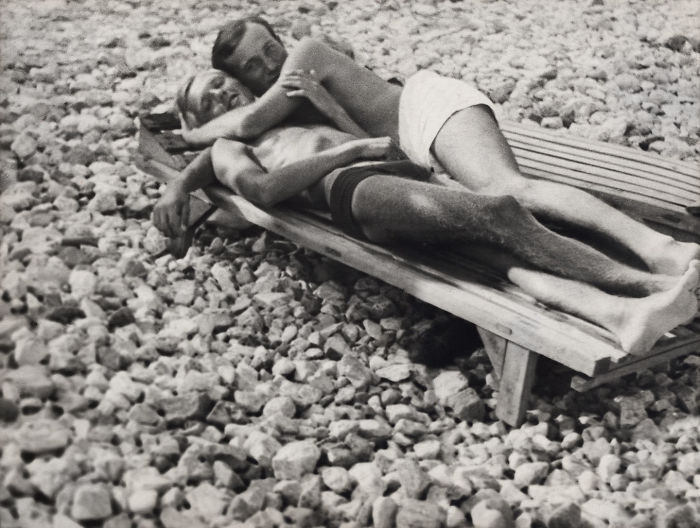 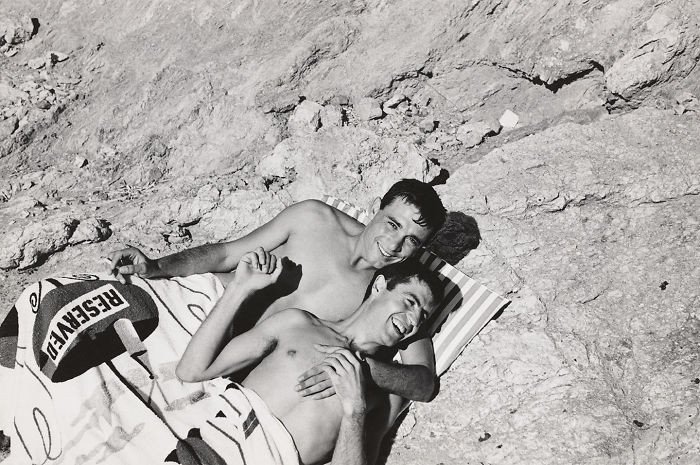 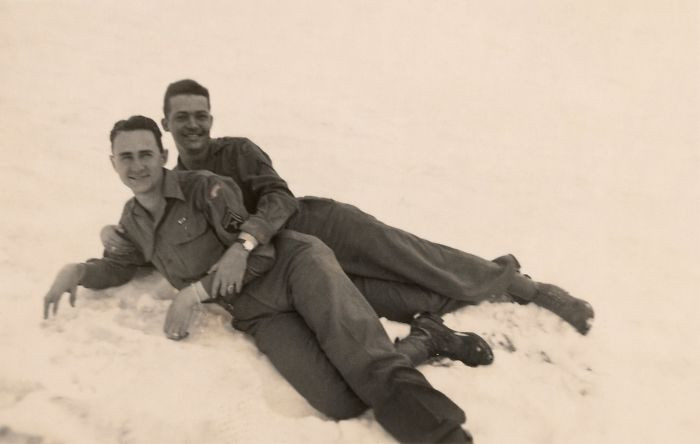 And for the world, the book. Neal and Hugh say:

"Our collection reveals to the world, and even to us, for the first time and voluminously, that feelings of love, attachment, or longing, between two people are the same - regardless of the gender make up of the couple." 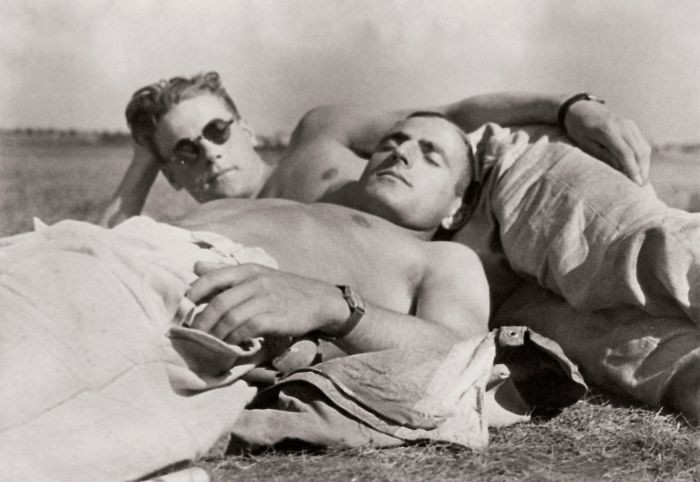 "These two young men, in front of a house, were embracing and looking at one another in a way that only two people in love will do. Dating somewhere circa 1920, the young men were dressed unremarkably, the setting was suburban, and out in the open. This open expression of love that they shared also spoke to their determination." 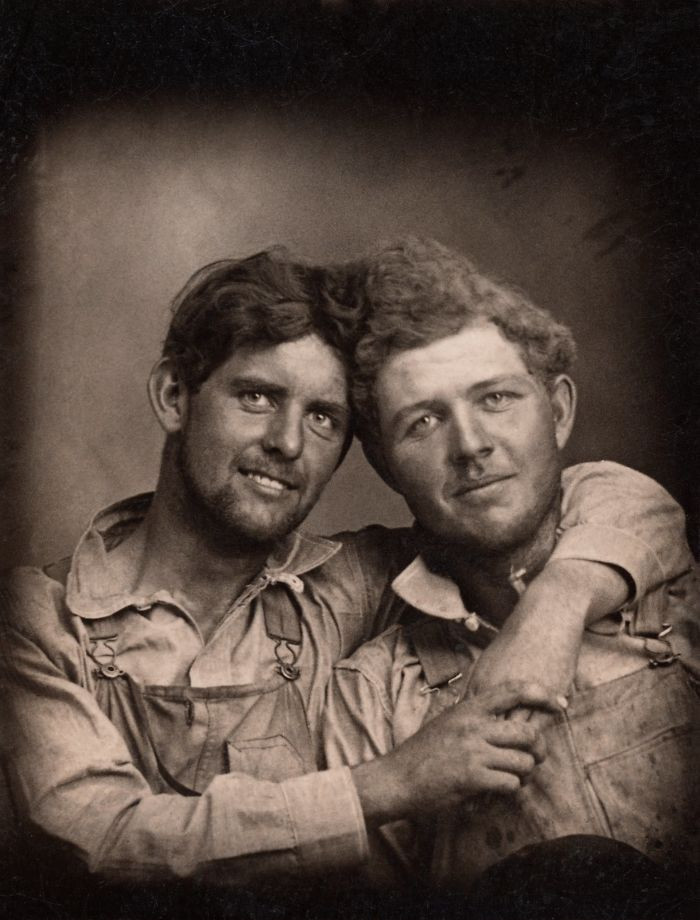 "Set aside for a moment the umbrellas, beaches, cars, bicycles, and boats, even the embrace - it’s their gaze. Whether to the viewer, at one another, or averted, it always conveys the kind of romantic love that everyone knows about, and is singular and special." 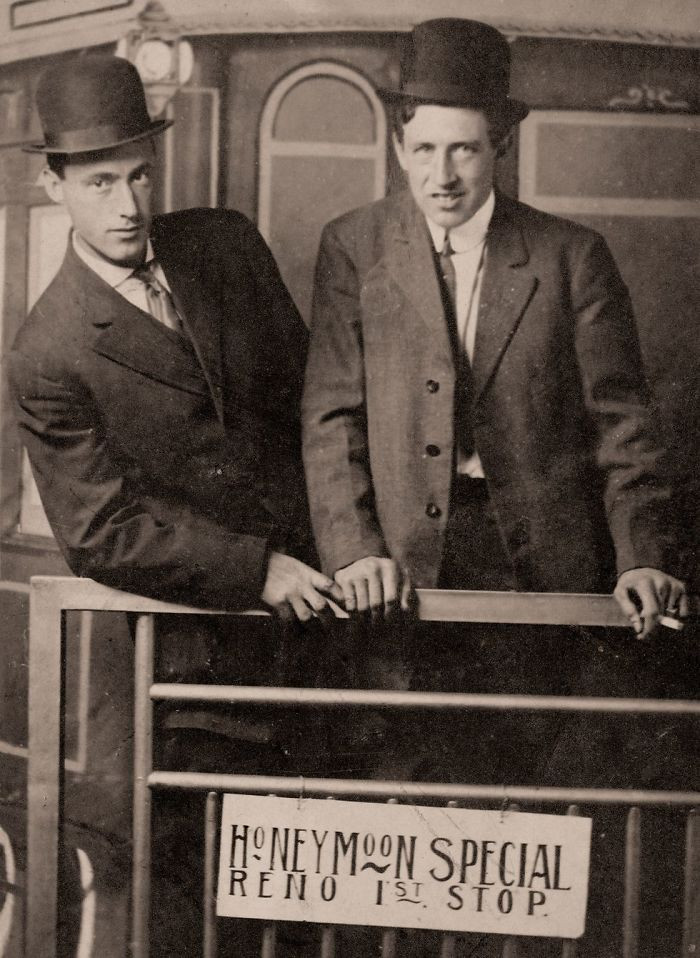 "They pose together in the bow of a boat, on a tree branch, on a bicycle, at the beach, in a forest, leaning against a car, and even in bed." 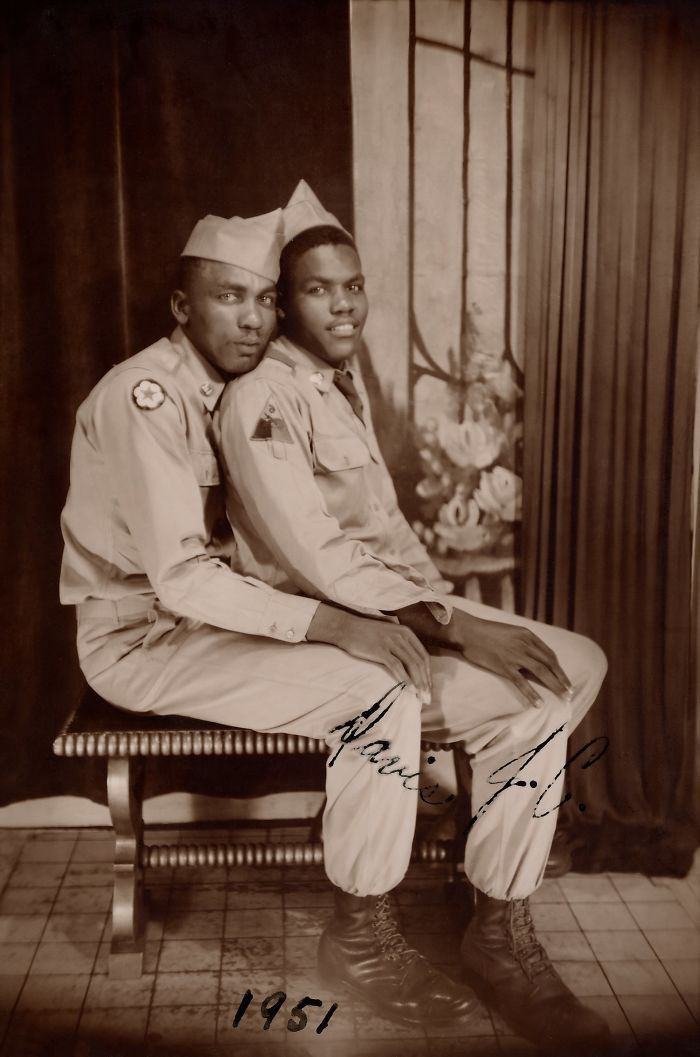 "They appear in many varied contexts that repeat across time and global geography. " 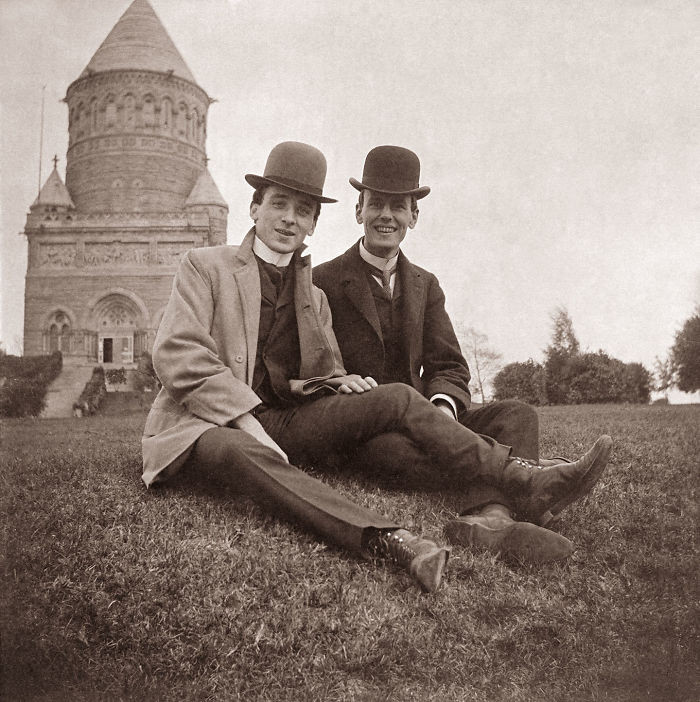 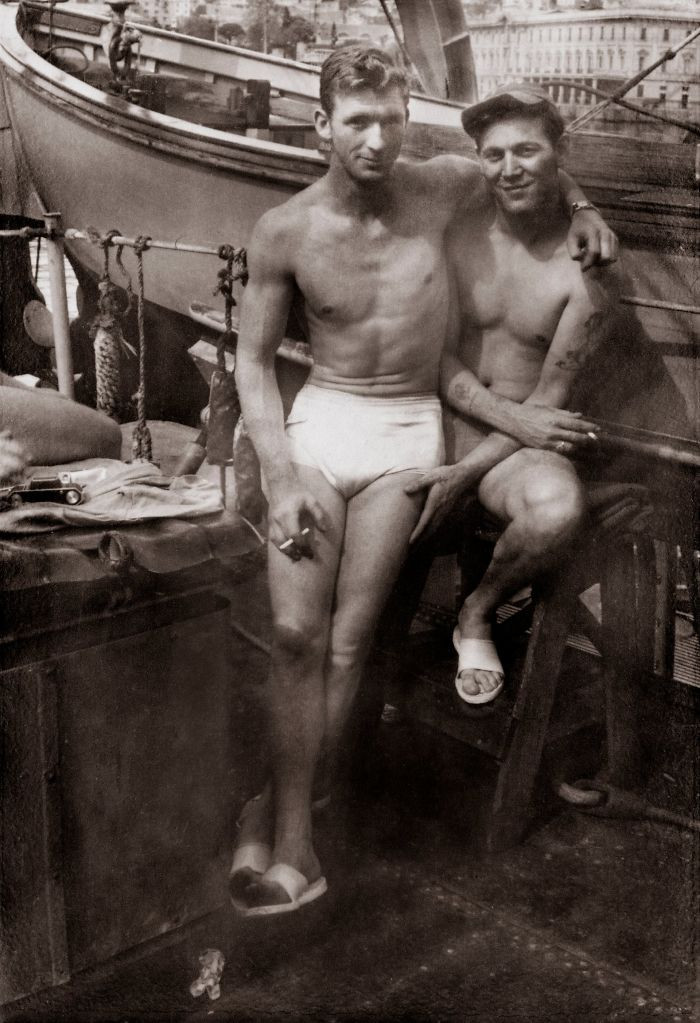 “Flipping through the book, it wasn’t that I felt that I learned a great deal about being LGBTQ, but what gave me comfort was the feeling that we’re not going anywhere. Seeing ourselves in the past is as much about being certain of our present and, dare I say, our future. When we see them as connected, we feel more whole, and that’s what love is about for many of us anyway.” 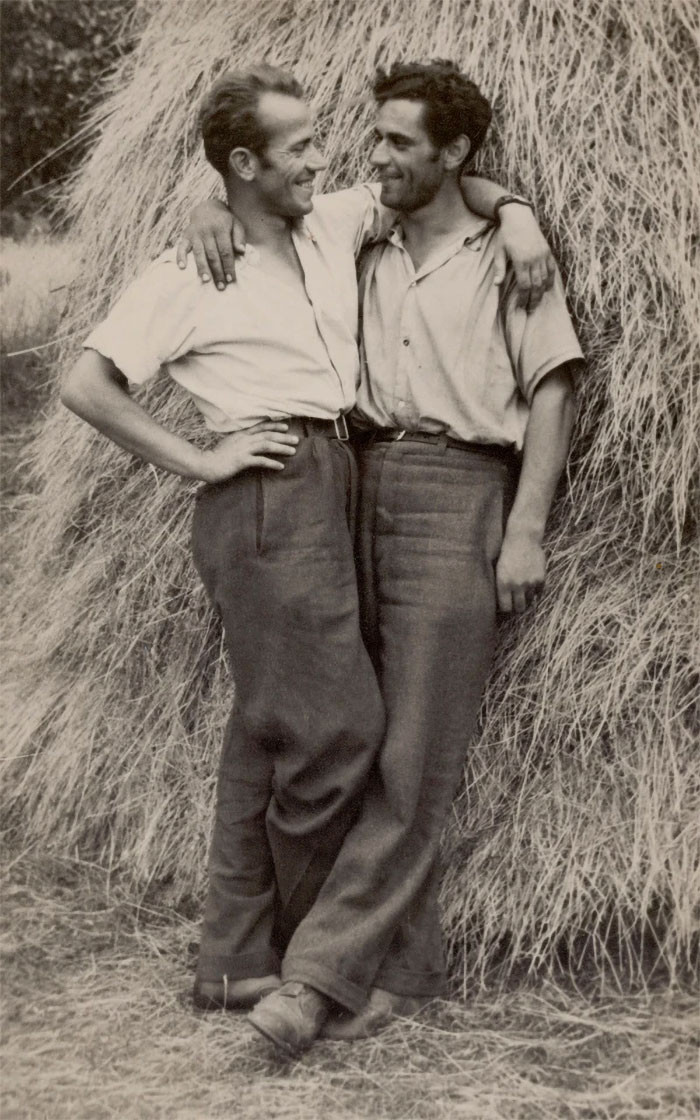 "Holding one of these photos, feeling its age, and seeing how they look at one another, or back to us, their emotions are palpable even today, so many years later." 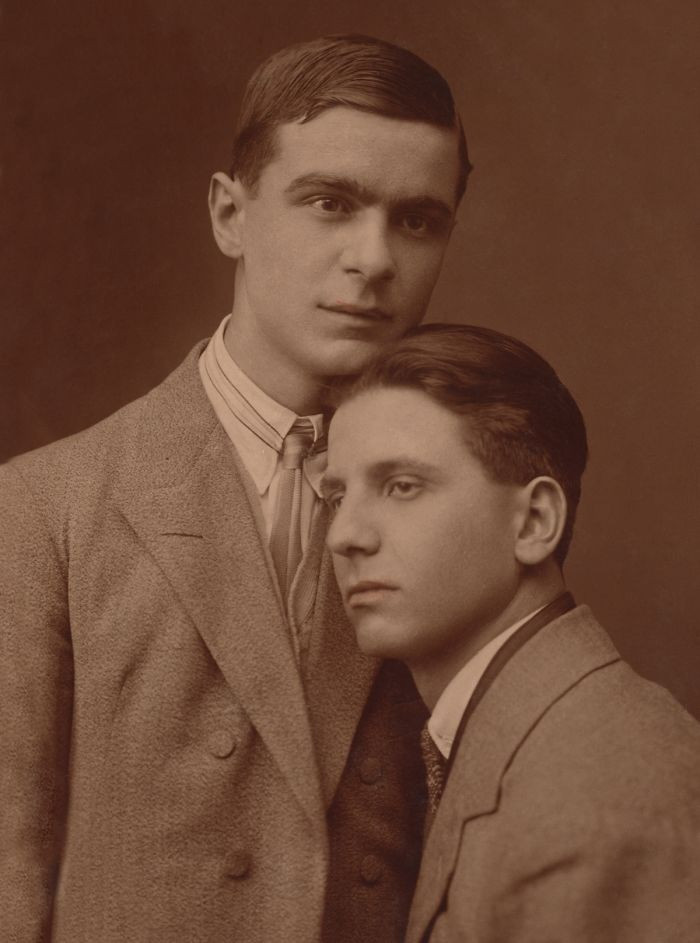 "LOVING is a book that is intended to usher in a new sensibility, a fresh humanism of love that, rather than categorizing individuals, brings us all together under one, if we may, umbrella. It shines a new light on the universality of the most written about, enacted, or filmed, emotion - love. Its message is for everyone." 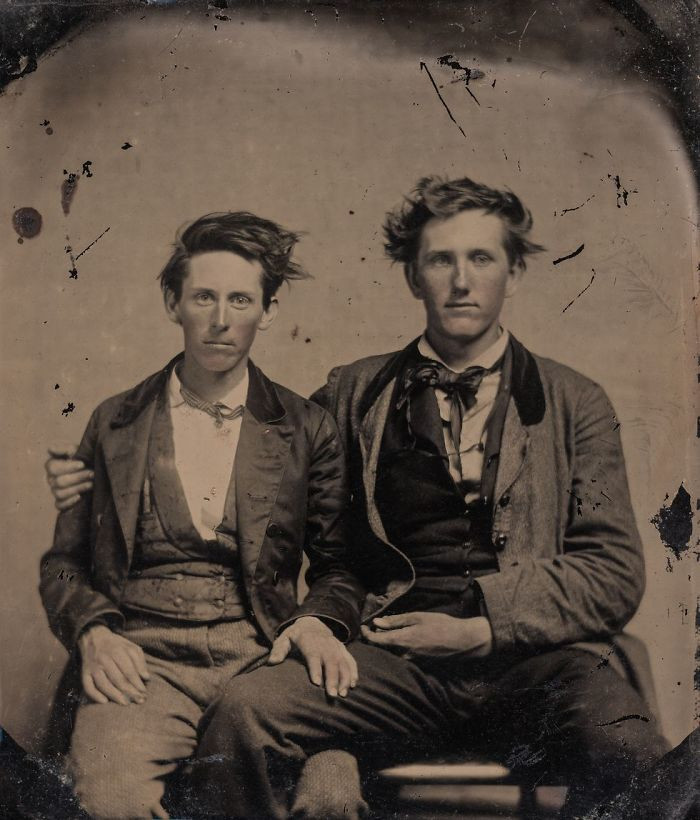 Avid travellers, the couple amassed over 2,700 photos by the time they were done with what they jokingly call their "accidental collection." They said:

"In the beginning we acquired photos because they spoke to us personally. As we came across more and more, there was a sense that we were involved in some kind of rescue mission. These photos had stood the test of time for somewhere between seventy and one-hundred-and-seventy years, and we were now the custodians for these unlikely survivors of a world that is only just now catching up to them." 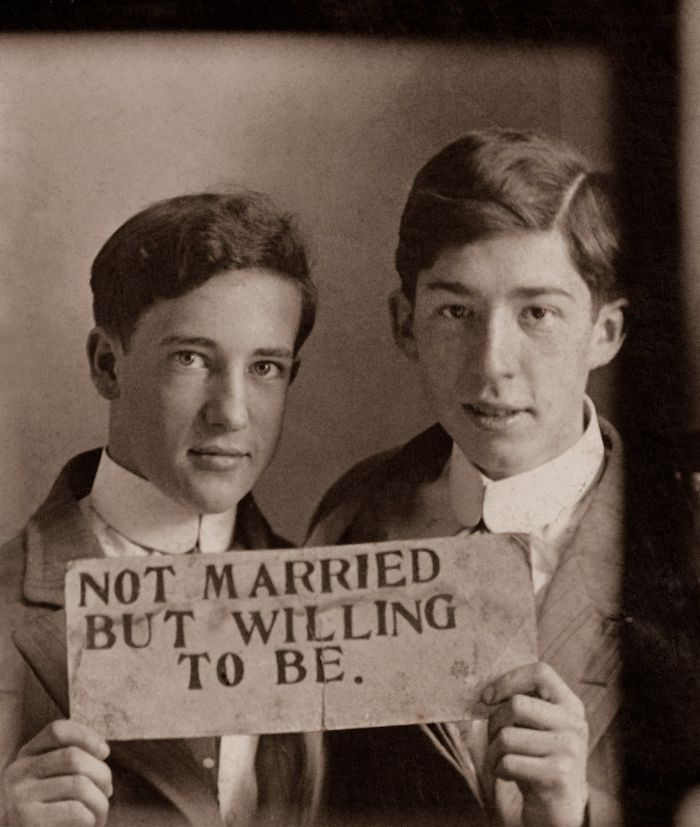 "The men in LOVING shared a common desire to be seen, only to one another, and to memorialize their stories despite the risks. Each image is an open demonstration of love, affection, and also bravery. When viewing these photos, we are drawn to the honest and disarming expressions of devotion evident throughout. The message here is as old as time, but from an unexpected, and heretofore silent, source." 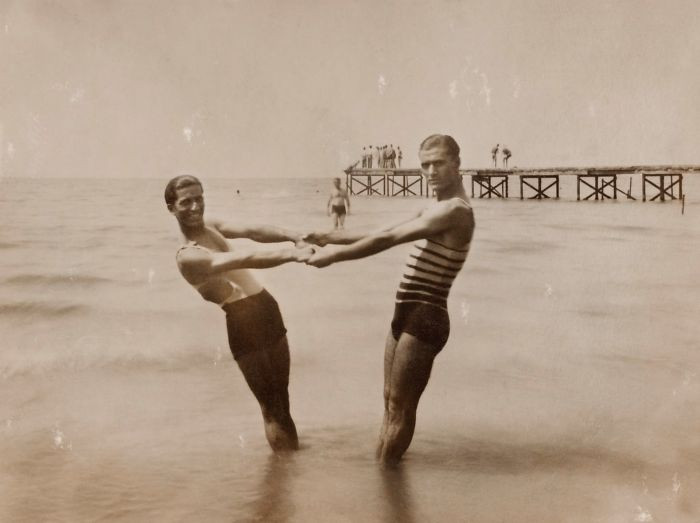 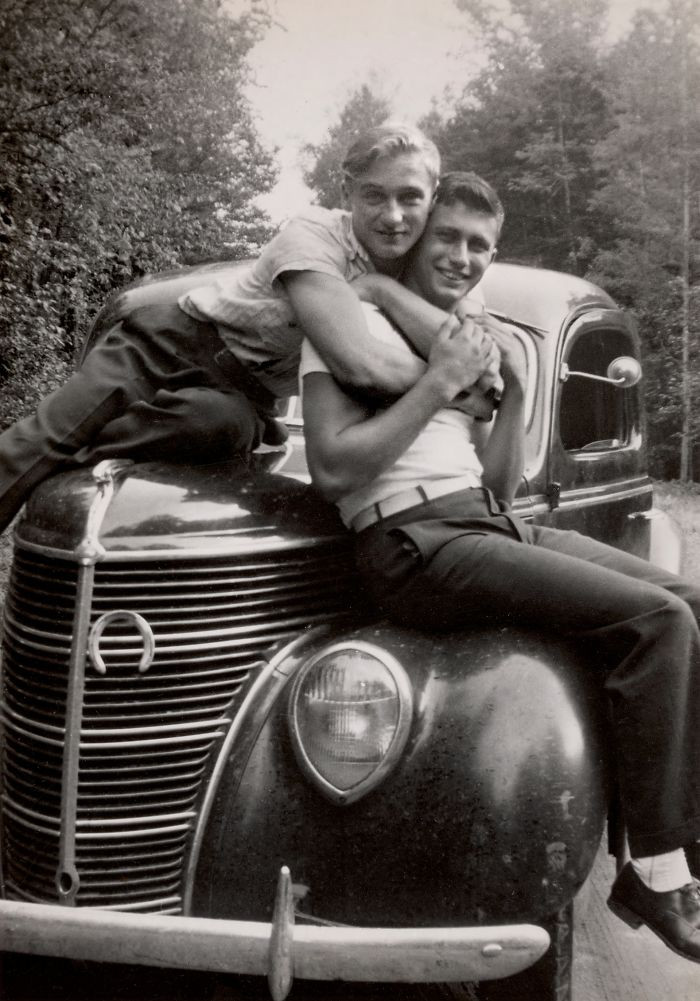 30. Undated, Provenance: Us. Note On Back: “Rubenstein And Whiskers, Ahk”

Jerry Portwood of Rolling Stone took a moment to note for the nonbelievers:

“You may scoff and think: Maybe it’s just guys horsing around (despite the kissing and legs wrapped around in intimate bedroom or picnic scenes) or that we’re unfairly placing our contemporary notions upon innocent, youthful friendships." 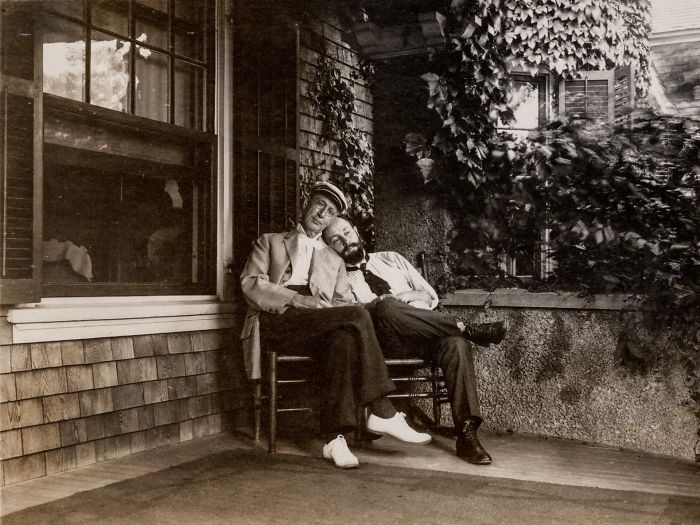