Towards the end of 2019, a new coronavirus broke out, and before anyone knew it, the world had to experience the whole year (and then some) with a pandemic. As people had to stay in their homes for the first time in so many years, the world underwent a series of massive changes.

People had to cut back on the hours they had to spend outside together with family and friends. Physical and mental health problems arose.

Most importantly, the economy suffered huge losses that put a toll on everyone and their means of living. The number of people in the workforce who lost their jobs grew each day, as evident in some mass resignations and career shifts within the United States, which already climbed to 4.3 million.

What contributed to this is the observance of strict health protocols, border controls, and business shutdowns. The limitations imposed on the movement of people and business, not to mention the stress that comes with it, became too much to handle.

So we came up with a compilation of photos to show you the mass resignations, and the career shifts brought about by the new normal. Perhaps many of you can relate whether you are on the business sector or worker's side.

The wage is never enough!

A Dunkin' Donuts employee has shared that he doesn’t get paid enough for his services. 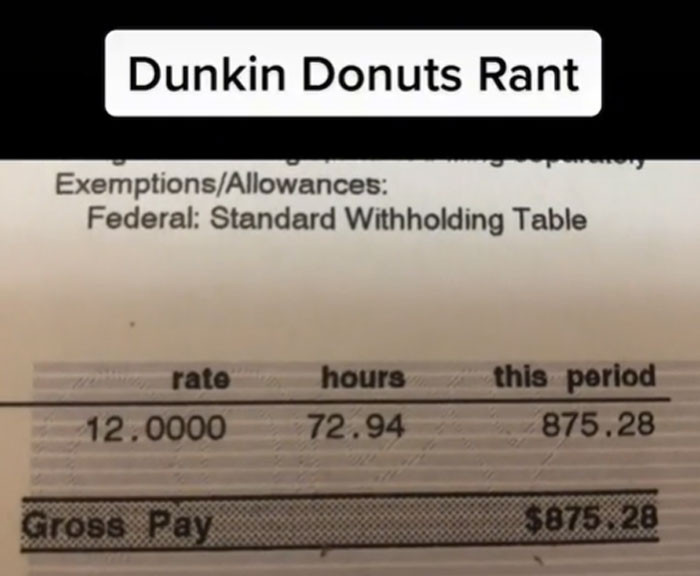 The employees are done. Half of the employees of this Chipotle branch in Kentucky quit, pushing the food chain to close temporarily.

Reports about restaurants and food chains closing down due to issues of unfair treatment, under-staffing, overworking, and inadequate compensation and wages are springing from everywhere, not just in Kentucky.

People had to work overtime because of the double, or even triple, workload they have due to the pandemic, but the employees and staff members are still paid below what they deserve and need to make ends meet. 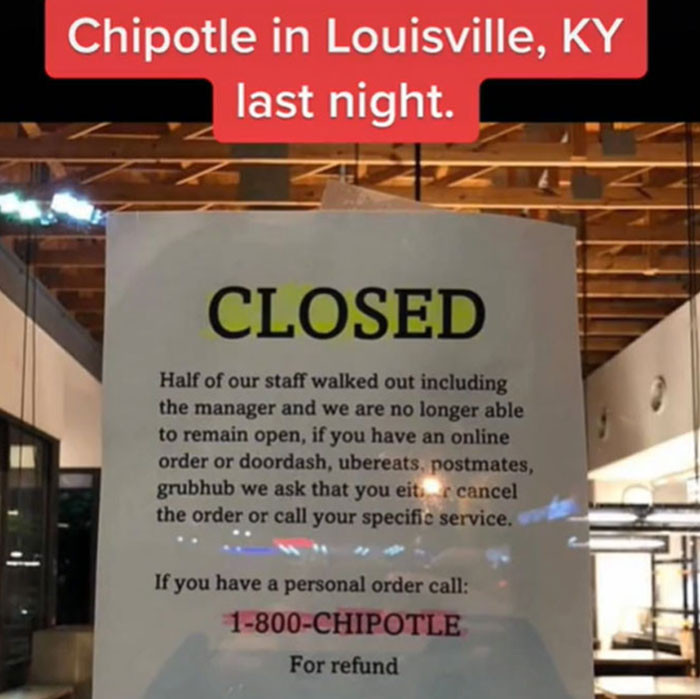 An establishment got ditched by its workers because of low wages, zero benefits, and understaffing. 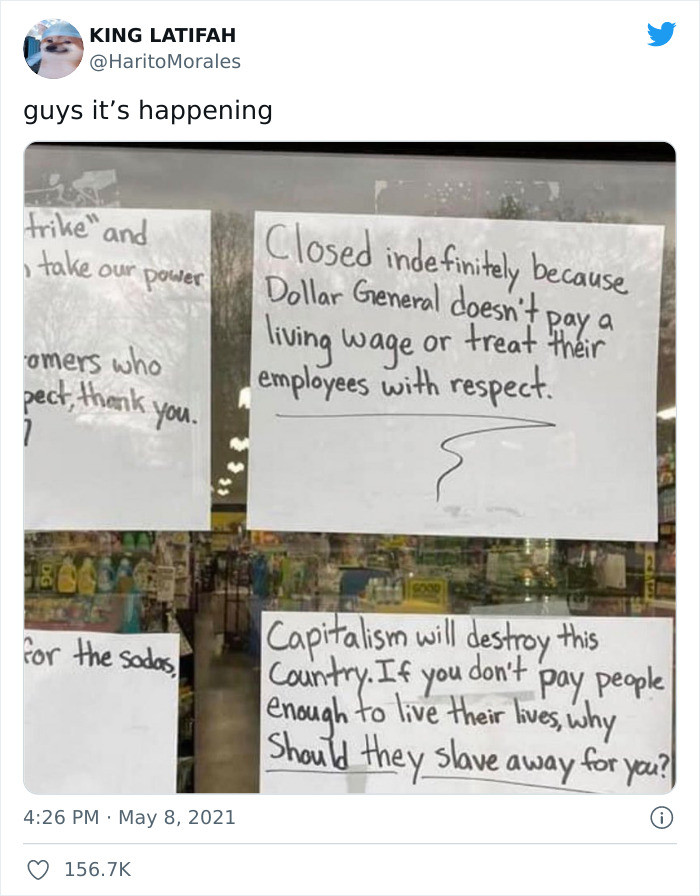 The side effects of capitalism are evident from the sudden rise of people not showing up to their jobs. 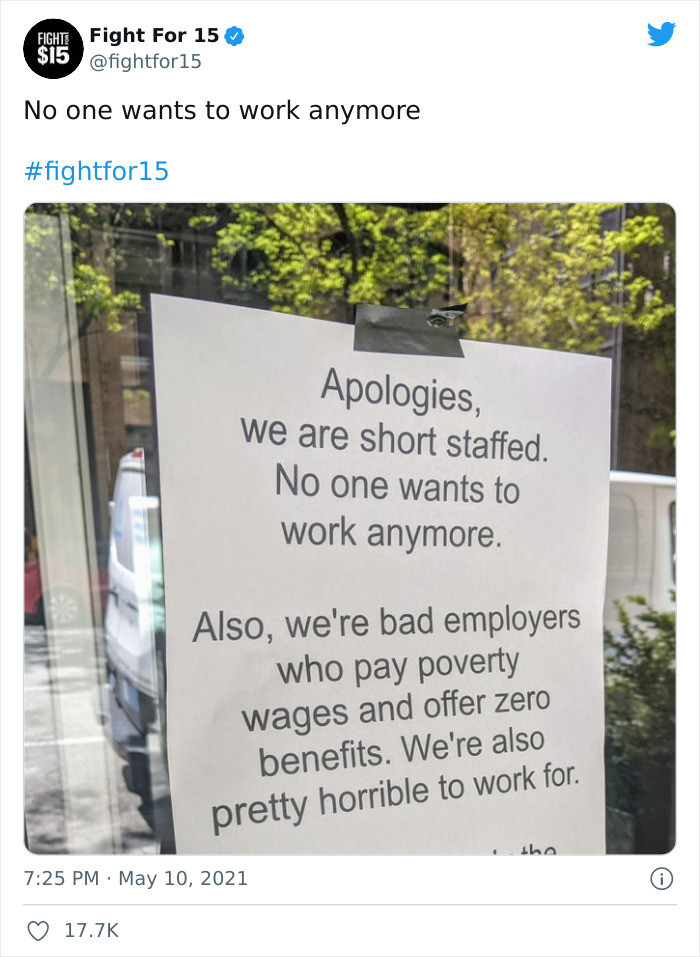 This Dunkin' Donuts branch had few workers left, so they have started encouraging impatient customers to send in their applications. 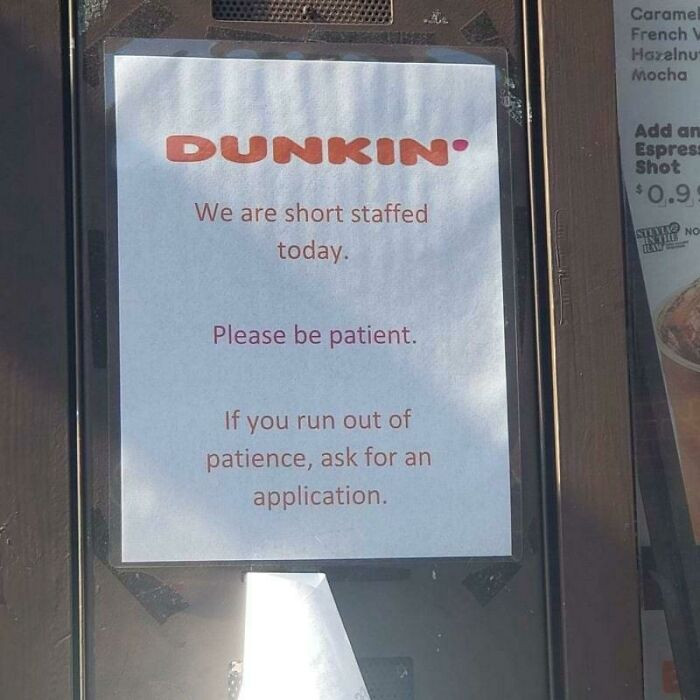 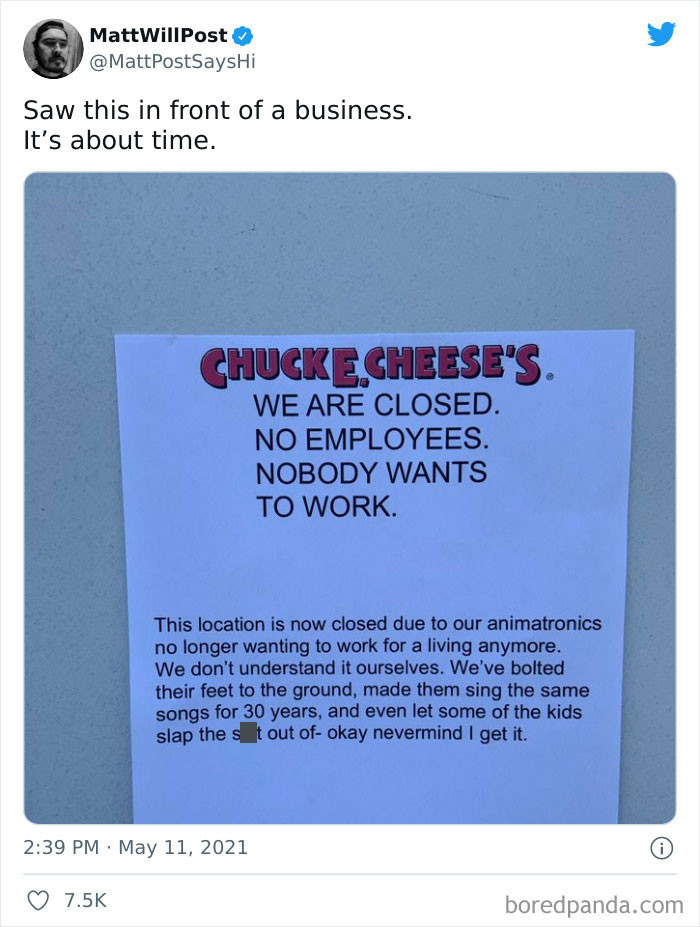 This Wendy’s last employee just came to work to inform everyone of the situation and to quit afterward. 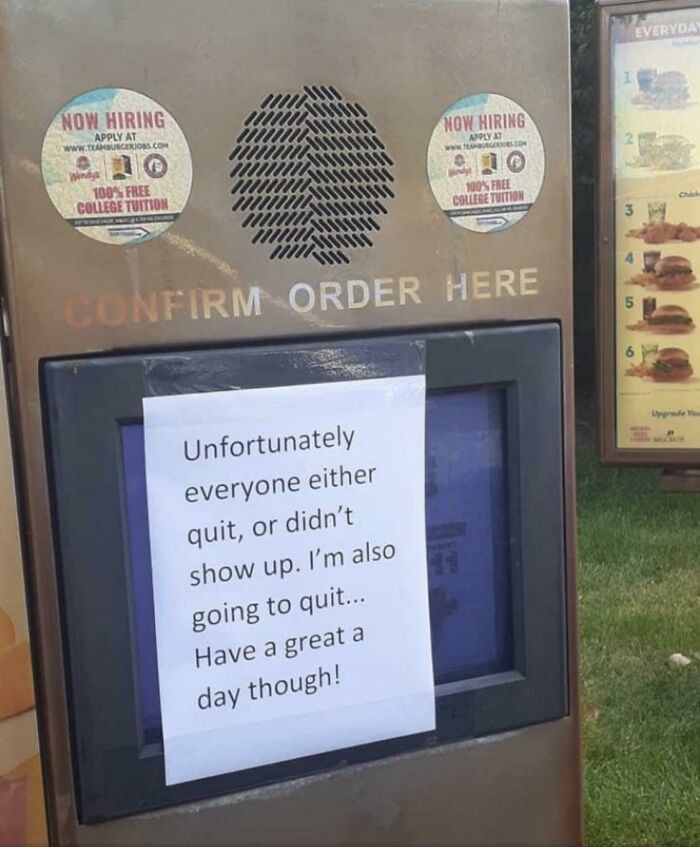 Closed due to no staff.

This establishment had to close and ask for applications because not one single staff member showed up. 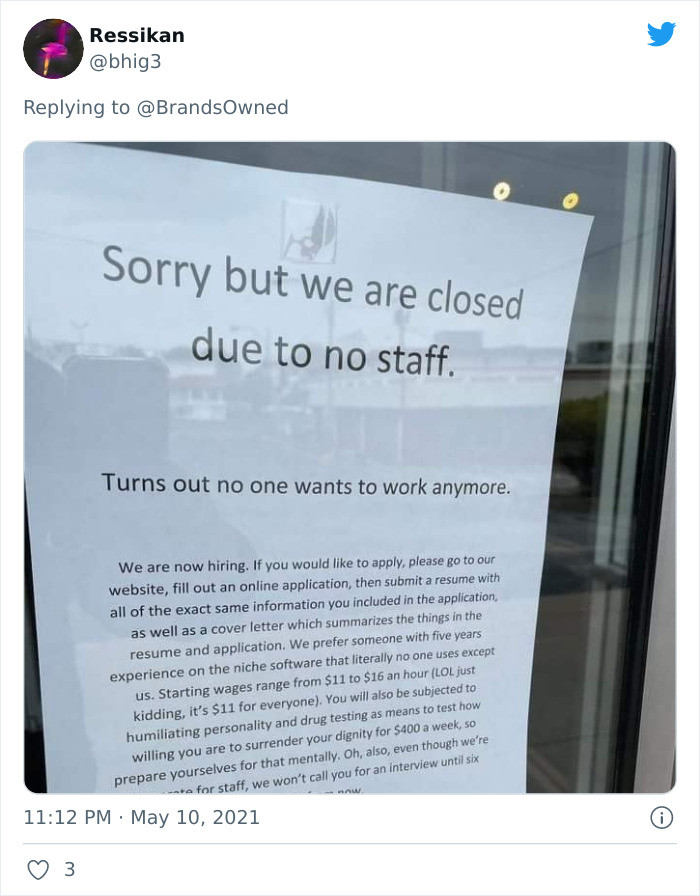 Demotivation at its finest.

A Burger King branch has closed early due to demotivated employees. 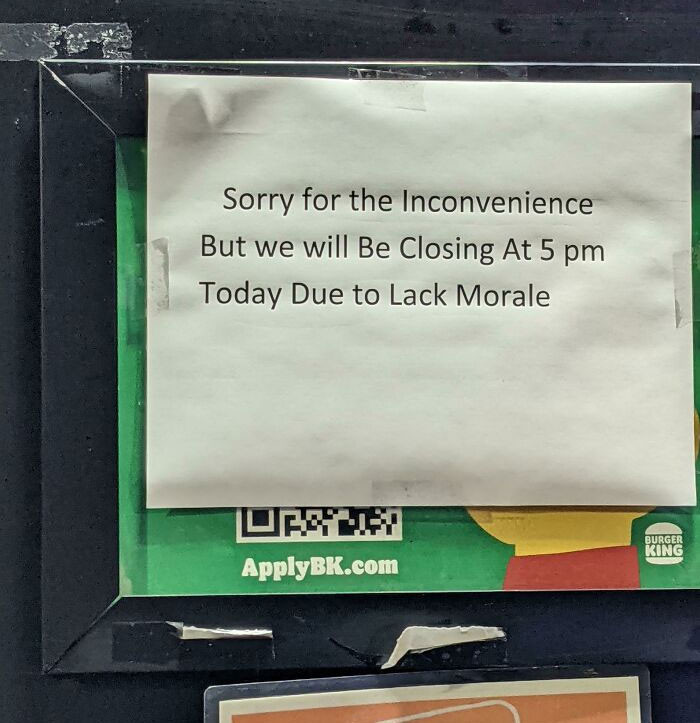 The secret is out.

A bunch of employees exposed their employer. They stated the reason for not working: having unfavorable working conditions. 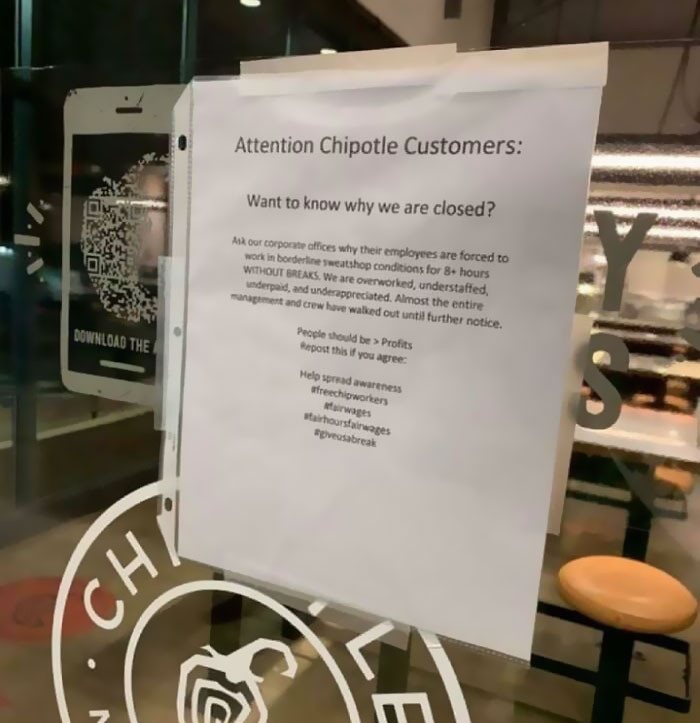 No space for exploitation.

Chipotle employees demanded action from their employer as they protested against being exploited. 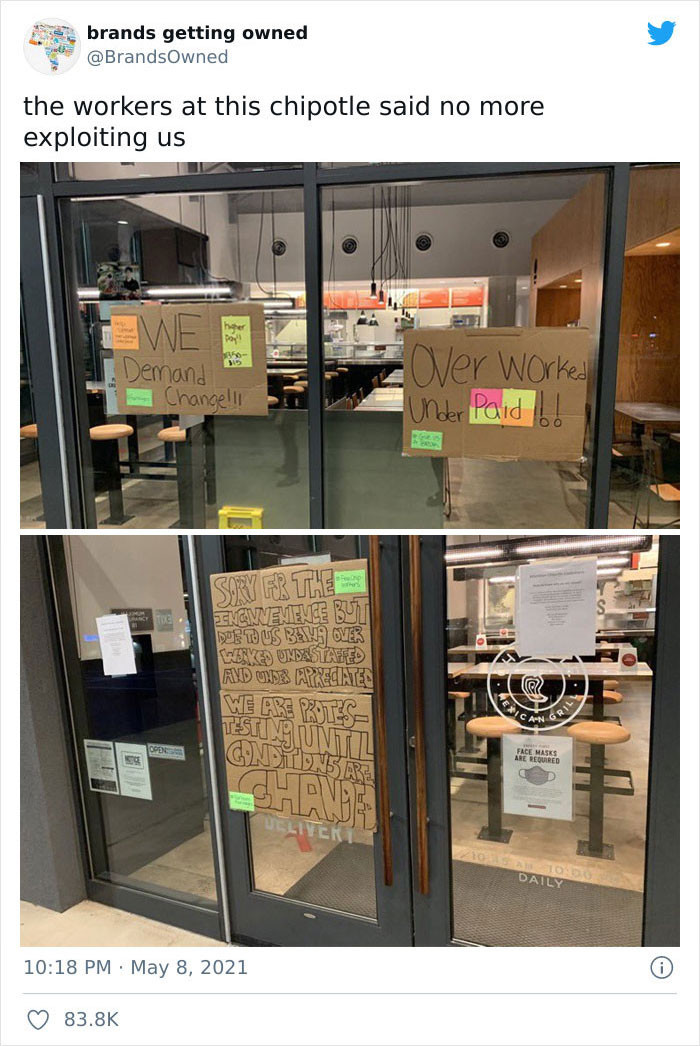 Nobody wants to work, period.

This restaurant is short-staffed due to underpaid employees not showing up. 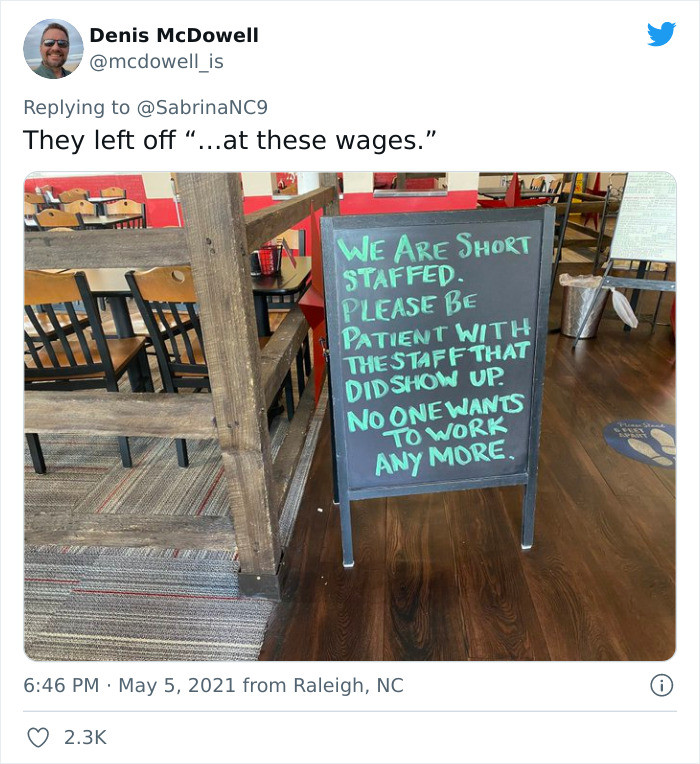 This business is hiring new employees, but it seems nobody is interested in the offer. 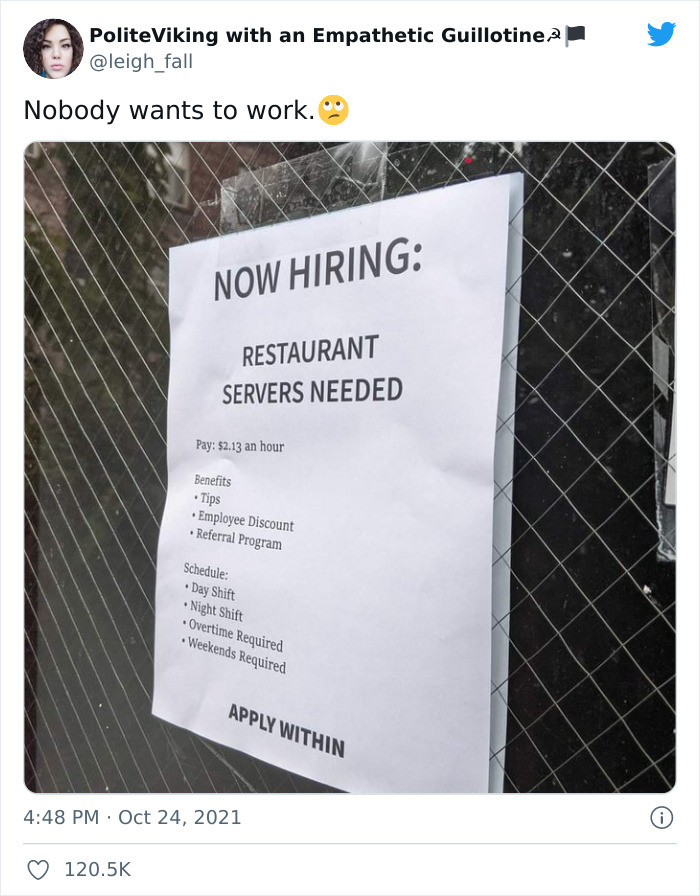 A couple of businesses in Chattanooga are looking for help as they become short-staffed. 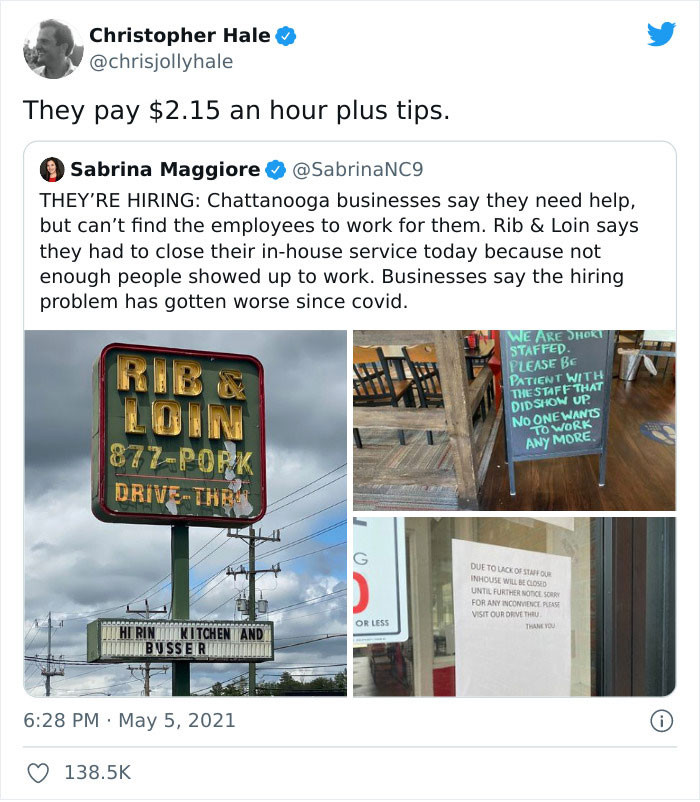 No workers, no service.

This store had to close because nobody would like to show up for their shift. 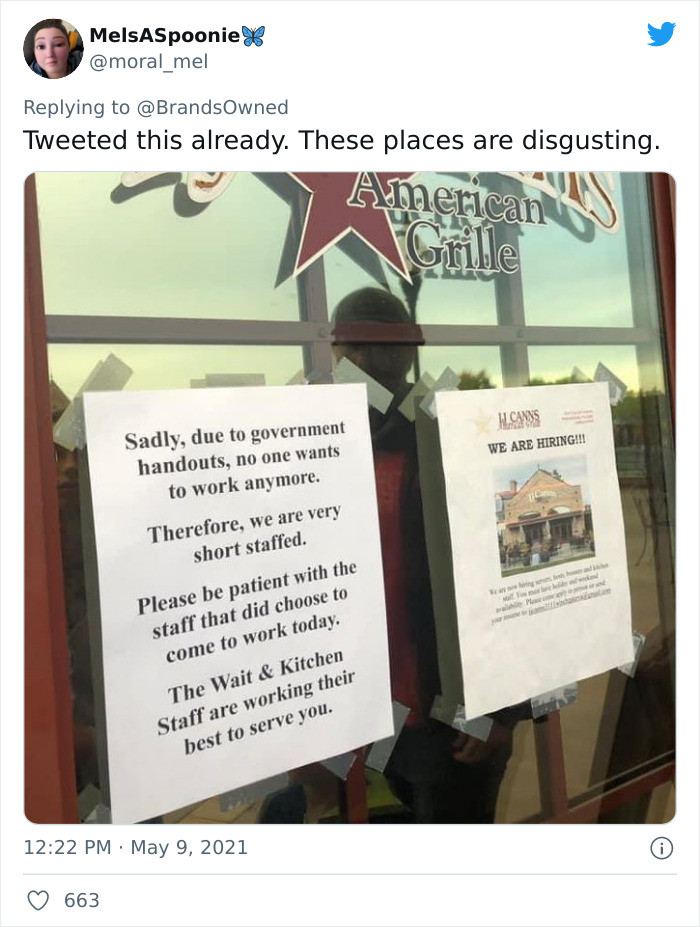 No one left. At a Burger King in Nebraska, everybody has quit their jobs. 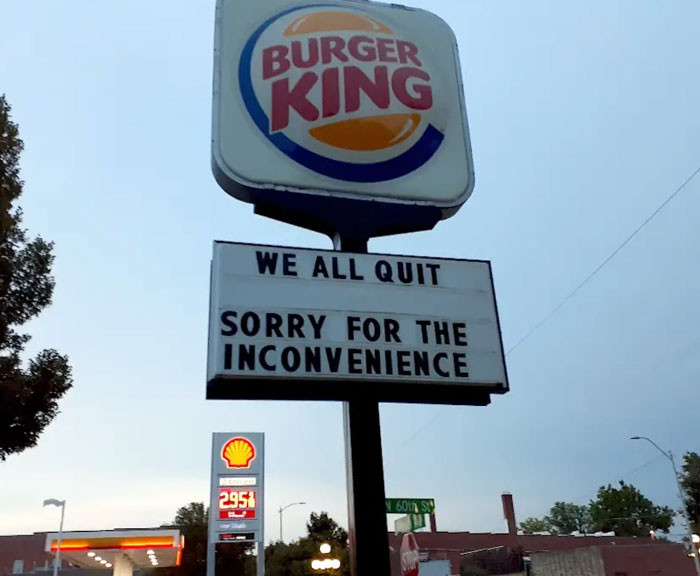 Closed! A store puts up a closed sign because no employee showed up for work. 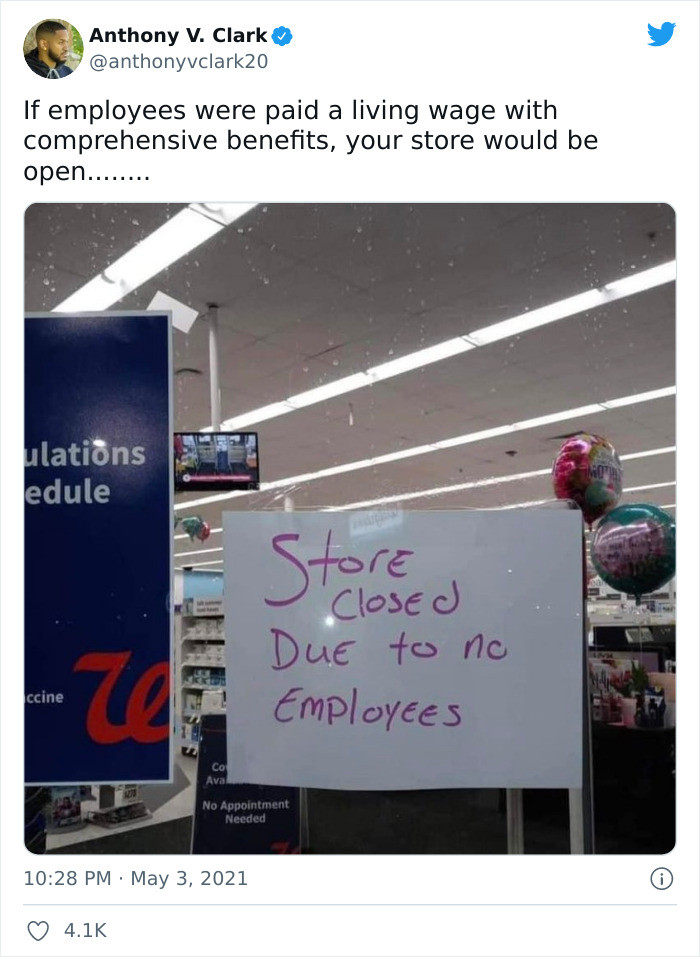 This picture shows how low wages cause mass resignation and the continued closure of businesses. 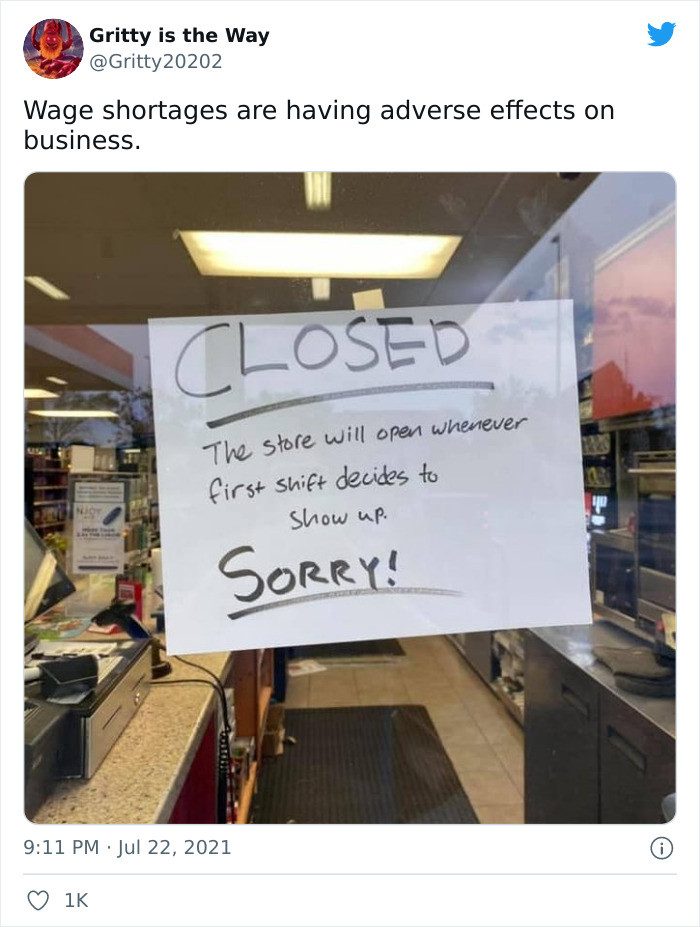 The pressure is on.

You can hear the frustration and pressure from this sign as the business loses its employees. 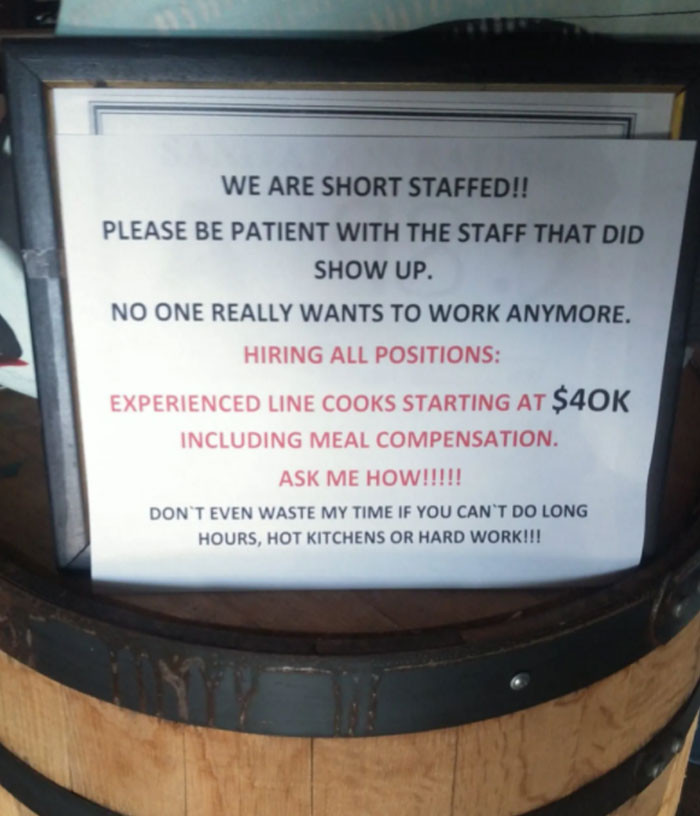 This business had to adjust store opening hours as their employees started not showing up to work. 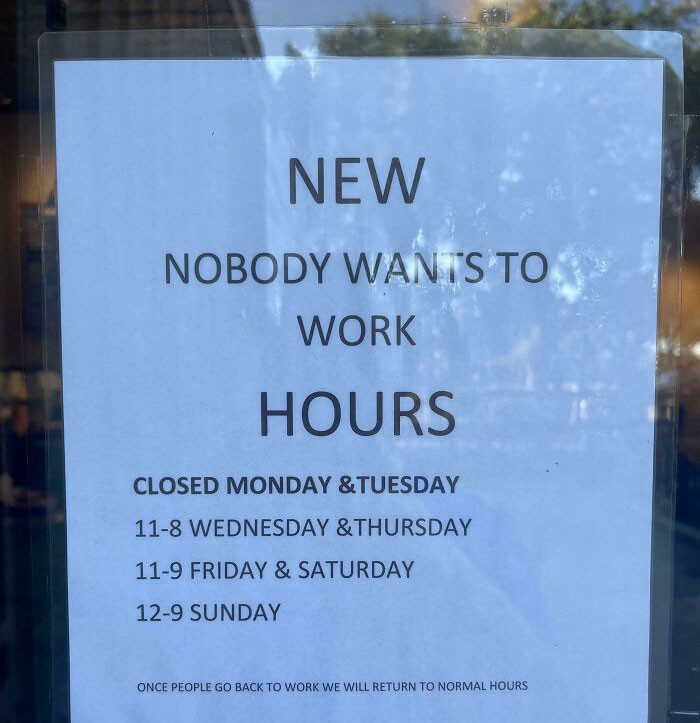 Same dilemma. A burger joint in New York had to ask their patrons to be patient as they are short-staffed. 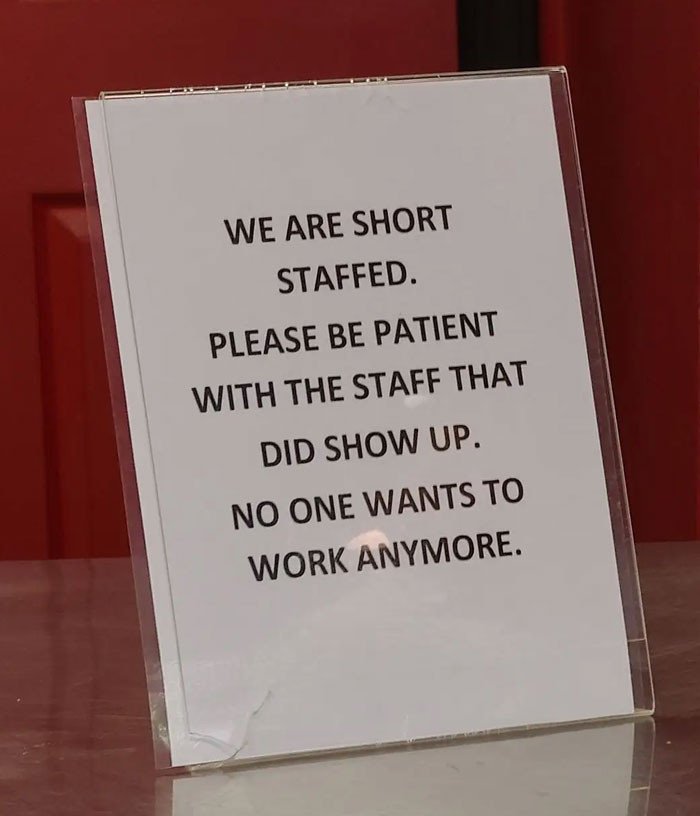 Quitting is a new trend. 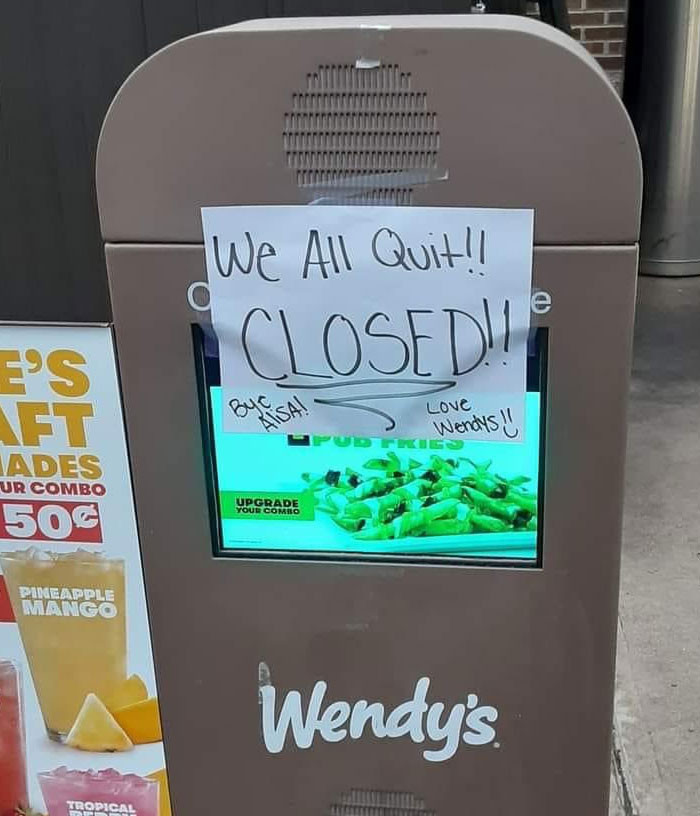 A pharmacy was closed due to under-staffing, which caused this diabetes patient's failure to collect her meds. 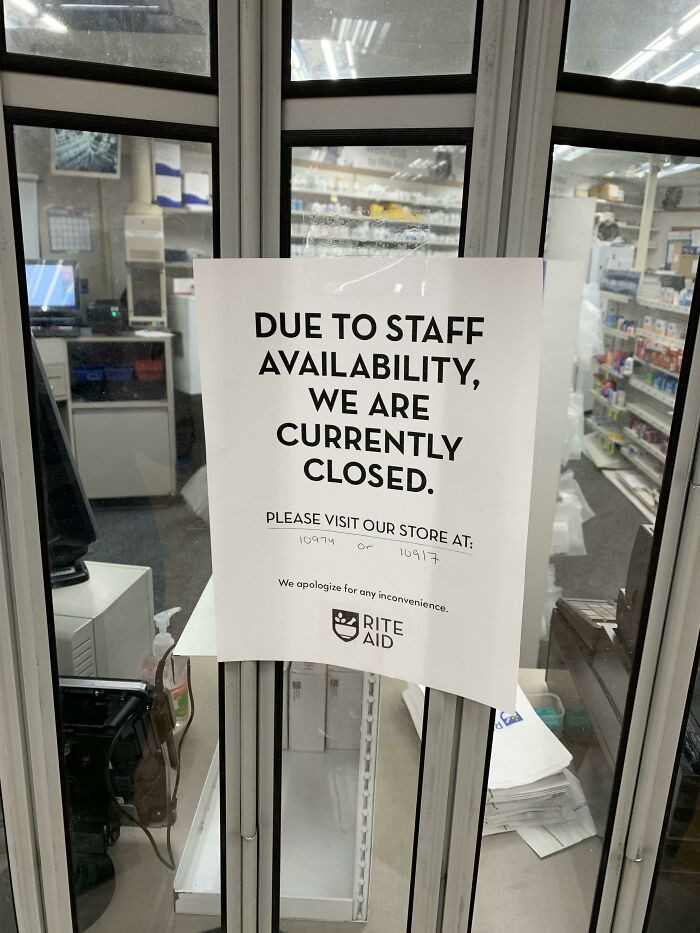 The employees of Sid’s had enough and don’t want to work anymore. 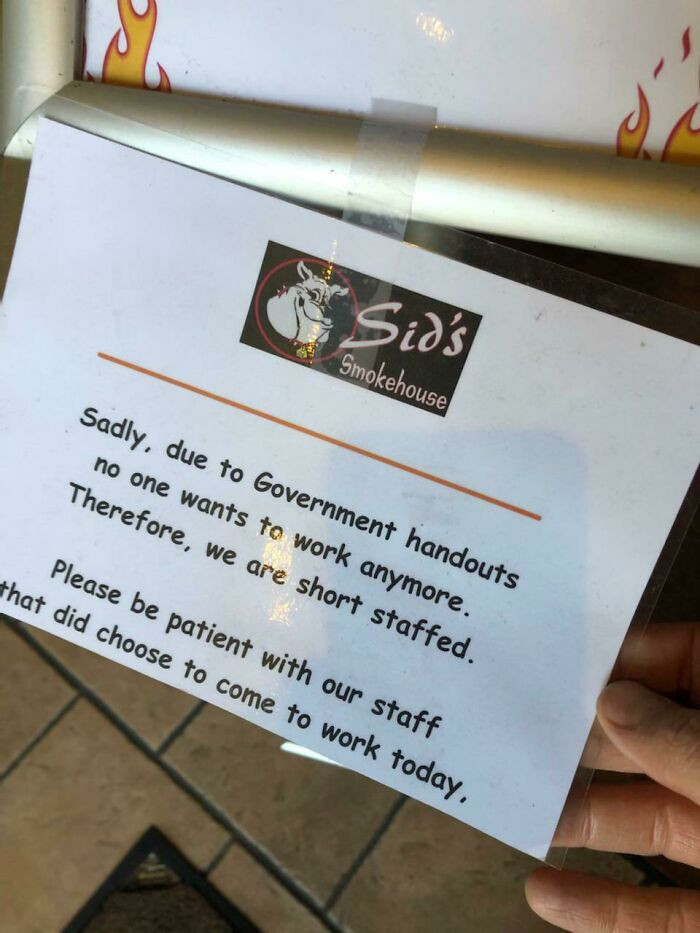 People are expressing their empathy over the employees who started mass resignations.

One thing is clear: employees are walking away from their jobs, and the employment crisis is spreading as fast as the coronavirus.

Take a look at these reactions. 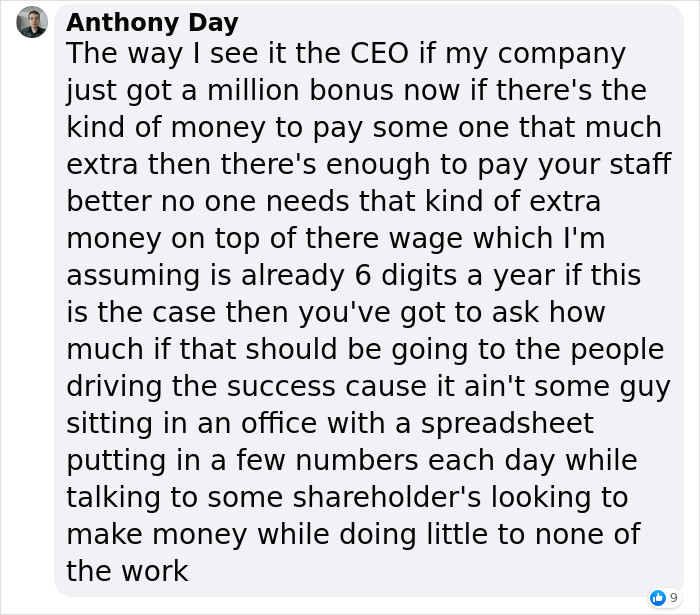 From an equally abused worker. 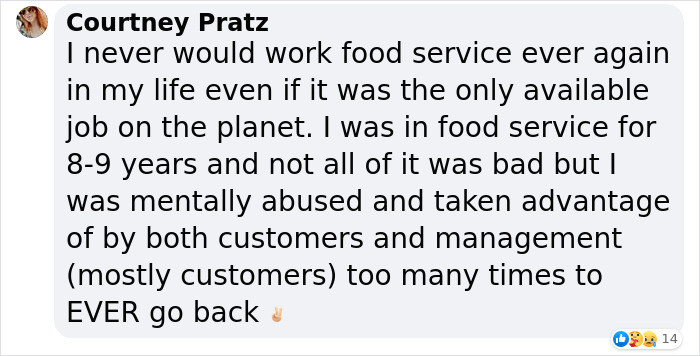 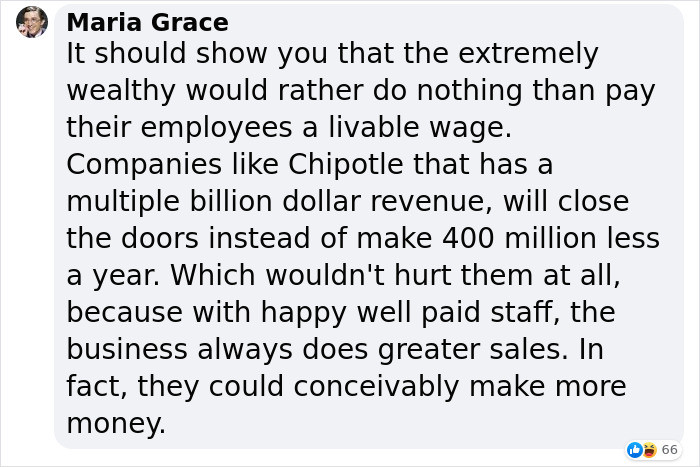 "Don't use the pandemic as an excuse!"

These photos came from various locations and different businesses. But it screams the same thing: Members of the workforce are tired and underpaid.

The employees are the greatest asset of a company. Life for workers is difficult enough as it is, with the pandemic still pretty much-causing havoc all over the world.

Employers should value their greatest assets else they will surely leave.