Sarah Everard, a 33-year-old marketing executive, disappeared on the evening of March 3 in south London, leaving the entire UK shocked and appalled.

A senior police officer has since been apprehended as a murder suspect, and it has just been verified that the human remains found in a forested area near Ashford in Kent belong to Sarah. “Sarah’s disappearance in these awful and wicked circumstances is every family’s worst nightmare,” the Commissioner of the Metropolitan Police, Cressida Dick, stated.

With the specifics of this terrible event still unfolding, social media users have been debating what men can do to help make women feel less threatened. Stuart Edwards is one of those people. He lives less than 5 minutes from where Sarah was last seen. Take a look at his post.

A Plan International UK spokesperson, said that “male allies can come together and tackle the structural inequalities which allow this public sexual harassment to happen in the first place.” Joining the #CrimeNotCompliment campaign could be the first step.

“Ordinary people taking even the smallest action can make a real difference. If anyone witnessed someone being harassed, a quick check-in afterwards, or an acknowledgment that the girl has a right to feel safe and not to be harassed, can make her feel better about her experience,” the Plan International UK spokesperson explained.

Sarah Everard disappeared on the evening of March 3 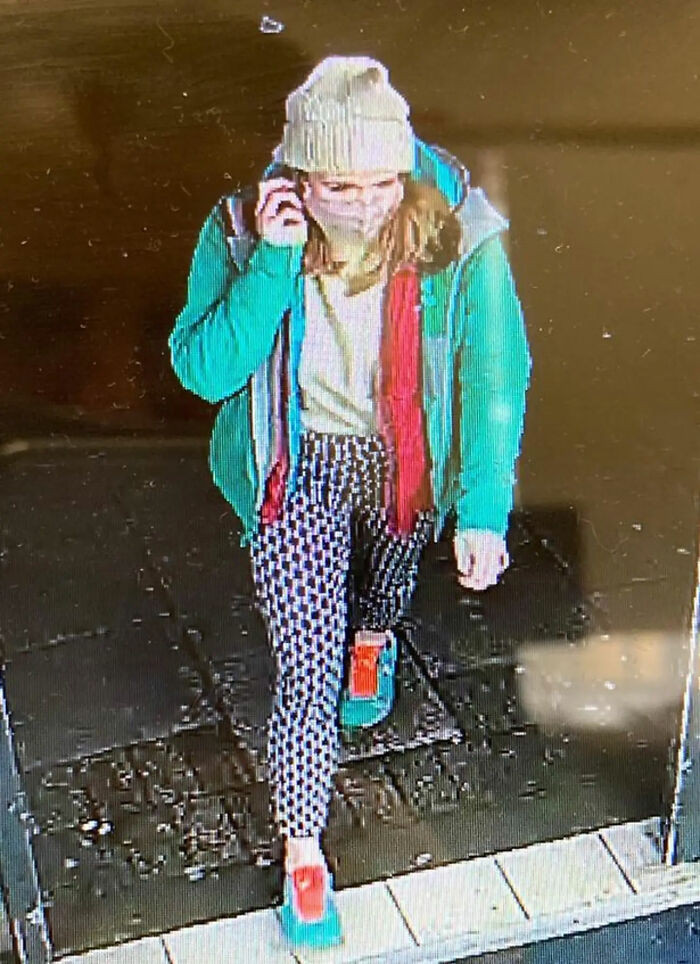 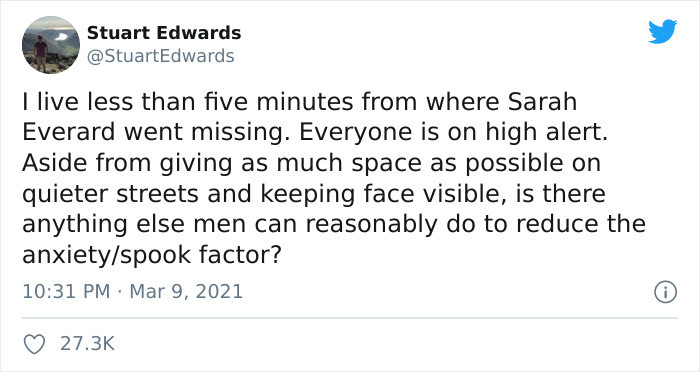 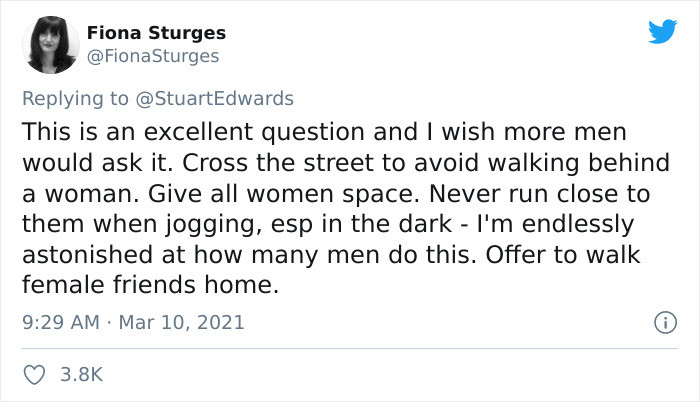 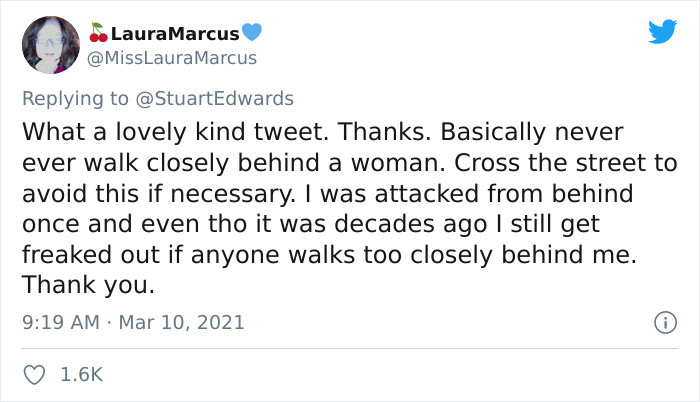 Even though the Covid lockdowns emptied the city streets, harassment is still a big issue. “Girls face a double whammy of restrictions to public space, both as a result of the coronavirus measures and their experiences of street harassment. Despite streets being emptier, this harassment has plagued girls throughout the pandemic, with half (51%) experiencing it over summer, and one in five (19%) during the first national lockdown. Now more than ever, we must stand with girls and champion their right to move freely in public, without the fear of being intimidated and harassed. That’s why we are calling for public sexual harassment to be made a crime.”

Rose Caldwell, the CEO for Plan International UK said: “All women and girls should feel safe in public spaces, yet they still continue to face harassment every day. They’re being followed, shouted at, touched, and groped—and it needs to stop. That is why our #CrimeNotCompliment campaign, with Our Streets Now, calls upon the government to establish a clear law that criminalizes all forms of public sexual harassment and protects the rights of girls to a life lived without fear.”

She added that: “Currently, there is no UK law that fully criminalizes public sexual harassment, leaving perpetrators to get away with it. As one girl told us, you can be fined for dropping litter in the UK, but not for harassing a woman or girl in public. This cannot be right. Only by enacting legal change will we start to see a cultural shift, so that girls and women will finally begin to feel safe in public spaces.”

Stuart, the thread author told the reporter: “I asked the question, but it’s the women who replied that are the voices that I think need to be heard. Me commenting would feel like a distraction from that. But thank you for giving a platform to the wider discussion.”

The Times writes that Sarah was seen on video footage leaving for home from a friend’s house on the main road near Clapham around 9:30 p.m. This was the last time she was seen in public. Her family raised alarms after they discovered she’d not been in contact with her friends.

In The Meantime, on Tuesday, March 9, a senior police officer was arrested at a house in Kent. The officer is part of the Parliamentary and Diplomatic Protection Command. Since this disappearance, the topics of sexual harassment, kidnapping, assault, and staying safe have dominated the public discussion.

A man named Carl, encouraged guys to be conscious of their actions 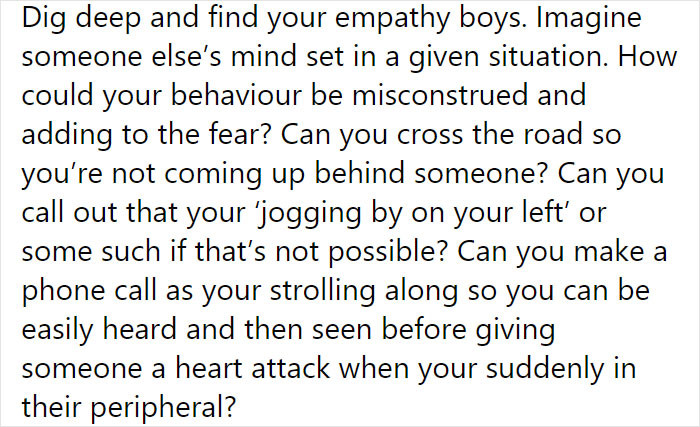 A UN survey found that 80% of women have experienced sexual harassment in public spaces at least once in their lives.

“This is a human rights crisis. It’s just not enough for us to keep saying ‘this is too difficult a problem for us to solve’—it needs addressing now,” said Claire Barnett, the executive director of UN Women UK.

“We are looking at a situation where younger women are constantly modifying their behavior in an attempt to avoid being objectified or attacked, and older women are reporting serious concerns about personal safety if they ever leave the house in the dark—even during the daytime in winter,” Barnett cautioned.

Meanwhile, a YouGov survey revealed that the vast majority of respondents (96%) did not report sexual harassment. 45% of them said that reporting them wouldn’t change a thing. And that’s sad. 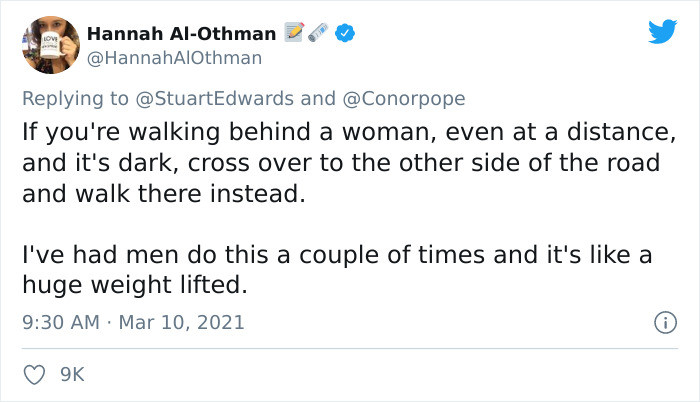 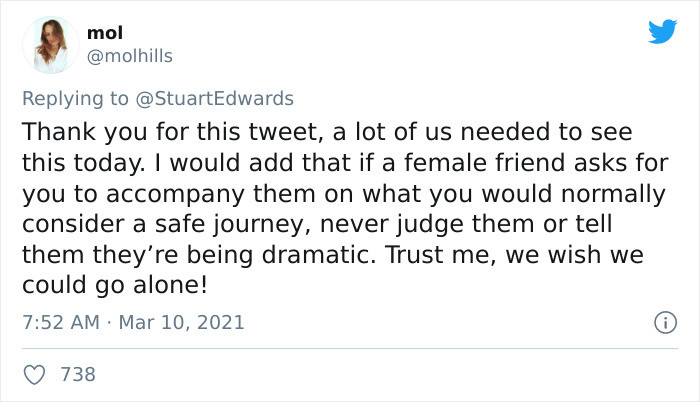 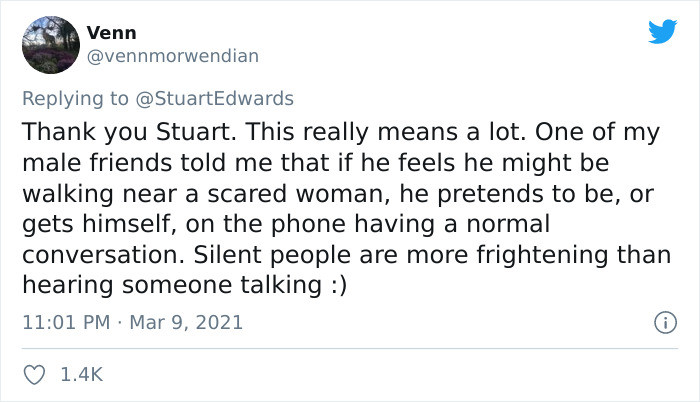 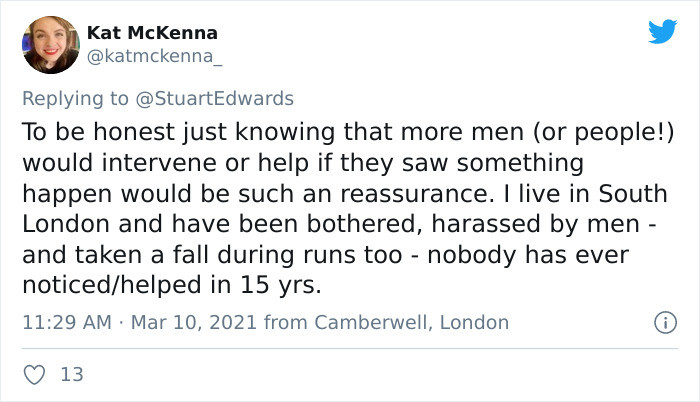 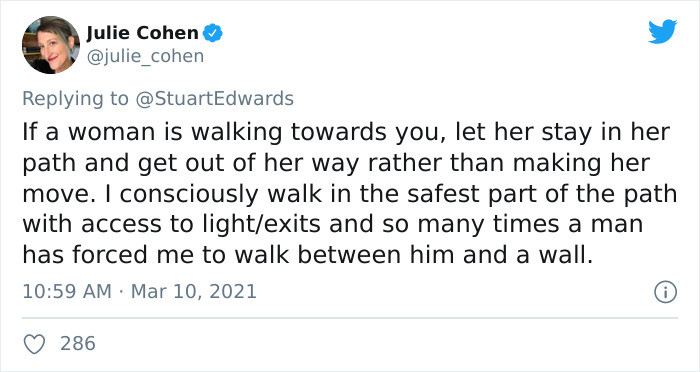 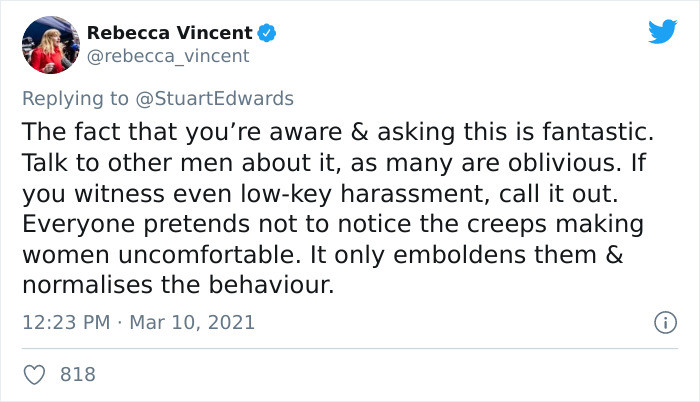 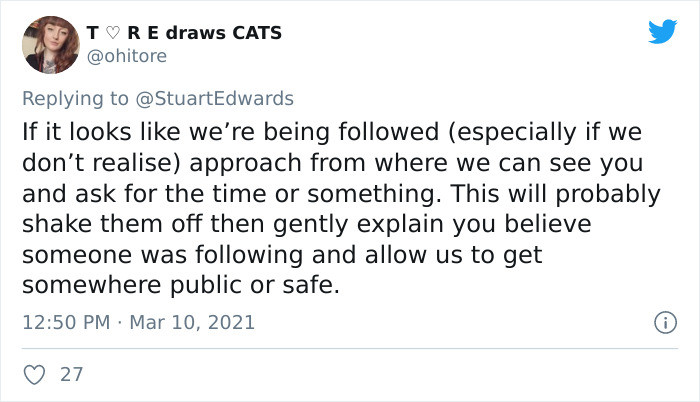 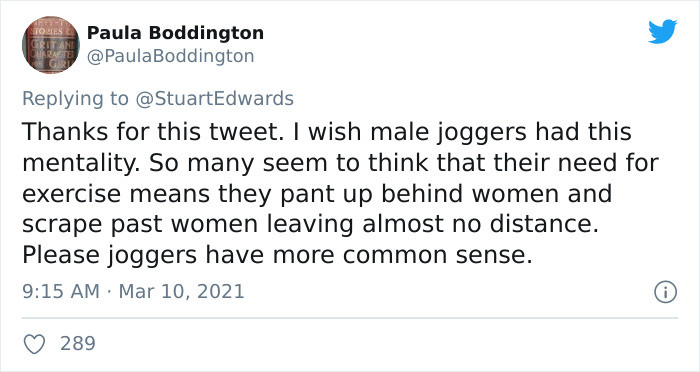 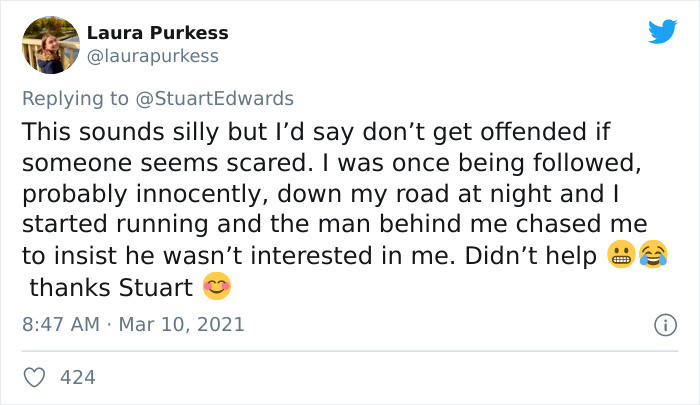 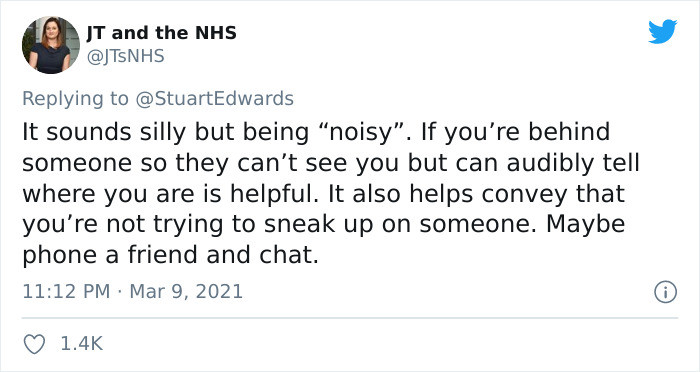 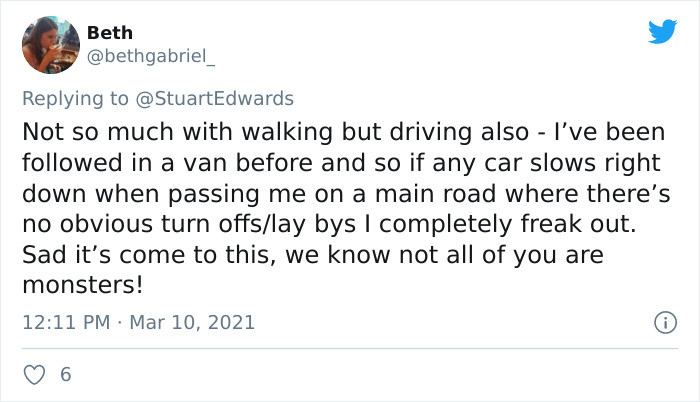 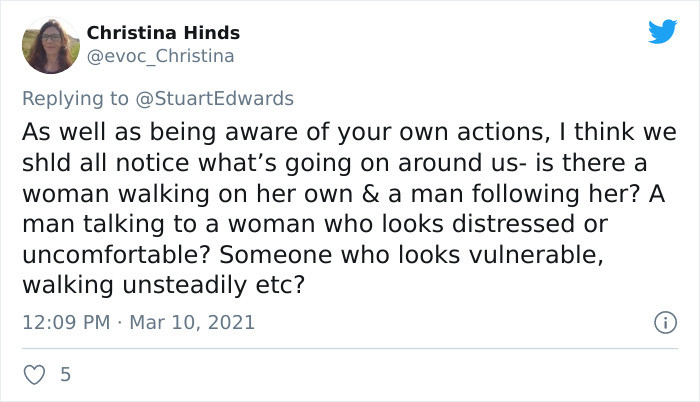 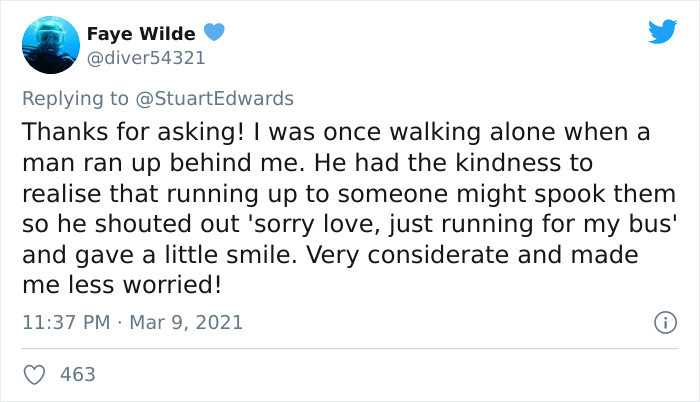 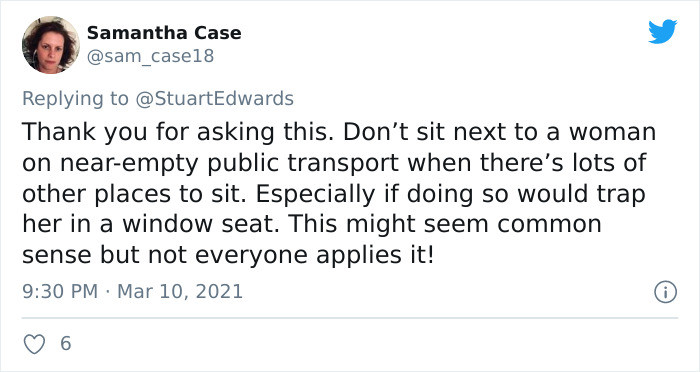 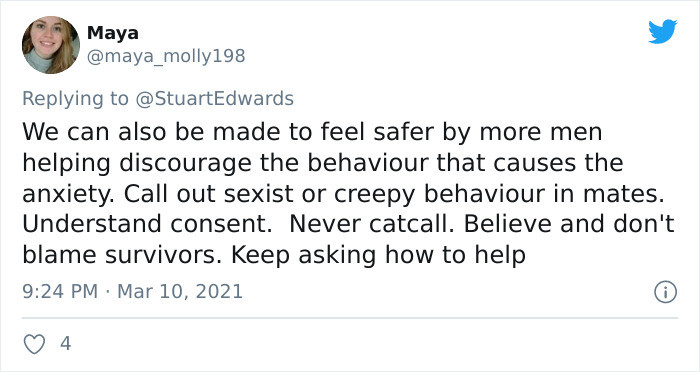 The BBC reports that patrols for women’s safety on the streets are being coordinated all over the United kingdom, as well as in Clapham, where Sarah went missing. The coordinators of the Reclaim These Streets actions said that it was wrong that “the response to violence against women requires women to behave differently.”

But the police have stated that the night watches cannot go ahead due to Covid-19 restrictions. The organizers plan to go to the High Court to challenge this edict.

The Metropolitan Police Commissioner stated that it’s still “incredibly rare” for a woman to be kidnapped on the streets of London. “But I completely understand that despite this, women in London and the wider public—particularly those in the area where Sarah went missing—will be worried and may well be feeling scared.”