Veronica is a 21 year old who hails from Las Vegas, Nevada, and she is making some pretty serious waves on Twitter. She recently tweeted about a TikTok she had seen, where the question, ‘What Would You Do If There Were No Men On Earth For 24 Hours’ was asked and subsequently garnered some pretty heart-breaking and shocking replies.

There's also responses from men which are, of course, kind of rude, patronizing and just in general what we have come to expect from many men on the internet. When reading these replies, it is important to keep in mind that the World Health Organization reports that 1 in 3 women will experience some kind of physical or sexual violence in their lifetime, so the women are coming from a relevant, real and honest place of uncertainty and fear.

Of course most relate to being able to DO things alone and at night... 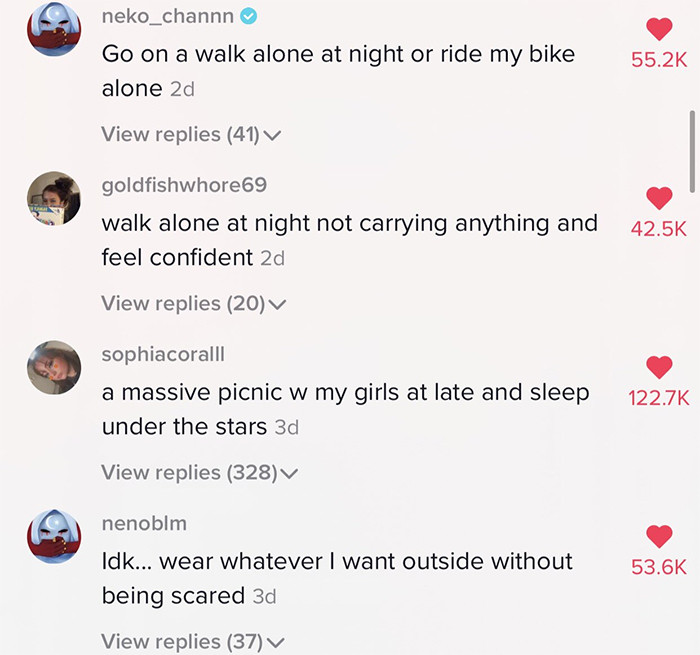 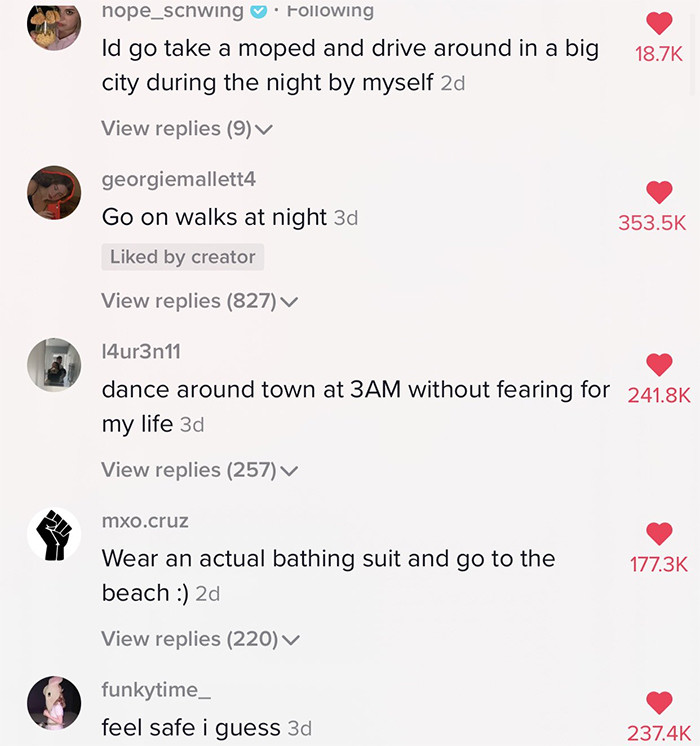 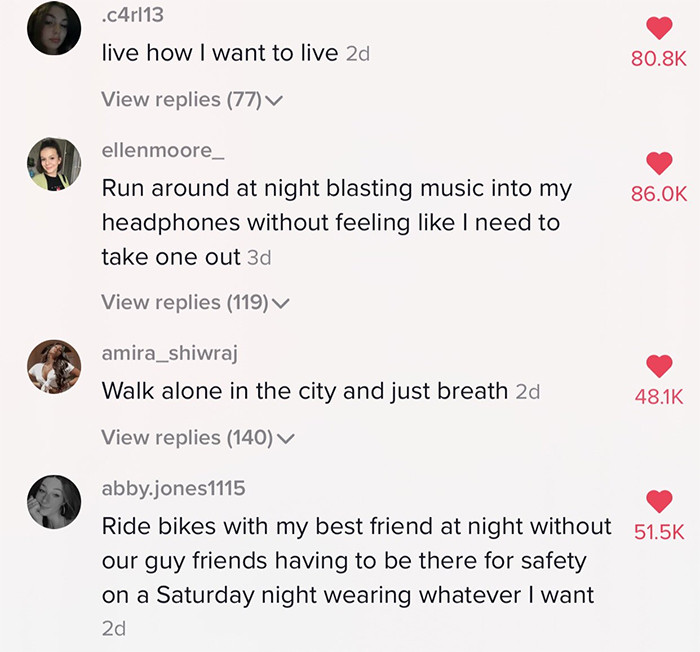 Walk with both air-pods in - PREACH! 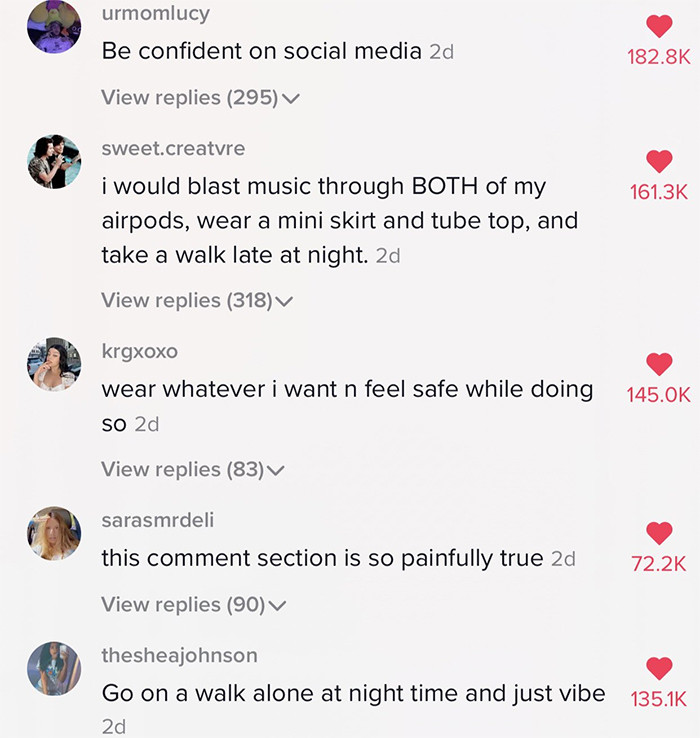 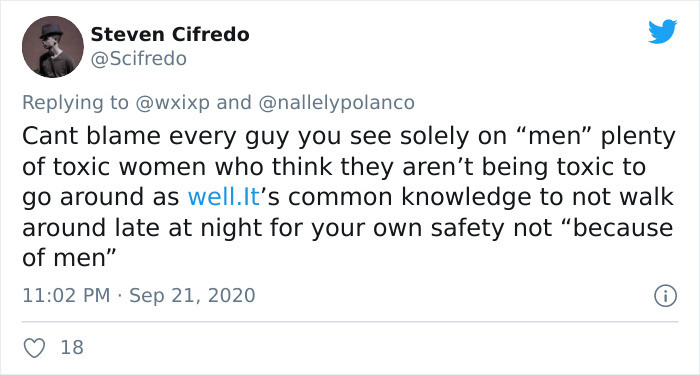 It doesn't blame them for every problem, you moron. 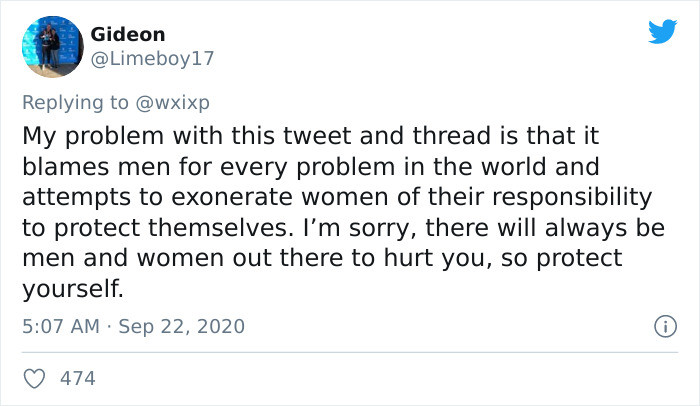 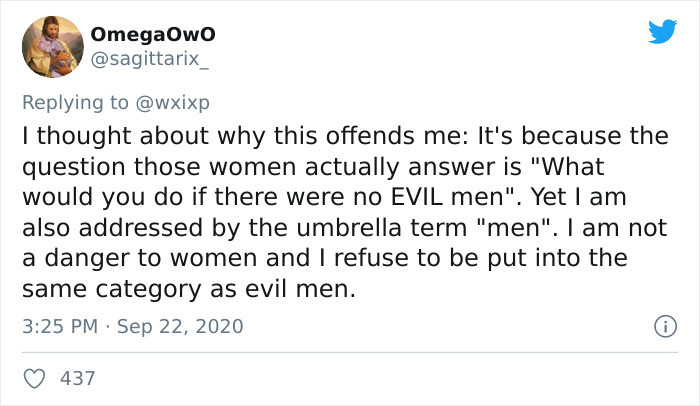 But women have each others backs!

Why are some of the men offended. Like who hurt you 💀💀💀💀

The point of this is, RAISE BETTER MEN. I told my husbands our kids ARE NOT growing up on that “Oh sex makes you a man” or any of the typical “man standards”. MY BOYS ARE GONNA CRY IF THEY WANT TO, NOT PRESSURE THEMSELVES OR WOMEN INTO SEX, ETC🗣🗣🗣

The IRONY is that men are commenting and PROVING why a lot of women feel like a world without men would be bliss. No man on gods earth is walking around living in fear that some woman is going to drag him behind a dumpster and rape him because his shorts were too short

The comments from men are upsetting but not surprising. Yes men can get attacked unprovoked too, but it’s much less often. ALSO men target us because 1) we are seen as inferior 2) as objects they can do as they please to 3) or just plain misogyny.

i love how men only bring up it can go both ways when they’re trying to discredit or dismiss women. any other time i bet they’d be calling another man weak for letting a woman do that to them

These are all things that women just have to do...

not that u asked, but ima tell u anyways.
I wouldn’t walk w/ my keys inbetween my knuckles, carry pepper spray anywhere i go, lock my doors ASAP once i’m in my car, avoid shopping at night, pretend to be on the phone, not have a designated gas station, always have an exit plan.

That fact that there’s men in the comments showing exactly why we should be scared of them....dear god

Veronica herself even had a rebuttal...

it’s the fact that I now have to mute this tweet because I’m getting shit from random men for it, like you really missed the point huh