In Oakland, Tennessee, August (affectionately referred to as Auggie,) lives with Steve and Jennifer Hetterscheidt. Auggie was adopted six years ago from The GoldHeart Golden Retrievers Rescue, a nonprofit rescue organization in Chester, Maryland that specializes in golden retriever dogs.

GoldHeart's network of volunteers "are dedicated to the rescue of unwanted, abused, neglected and displaced Golden and golden-mixed retrievers, and then placing in approved fur-ever homes." They've been doing their good work since 1999.

Auggie had been rehomed twice (due to no fault of her own, according to GoldHeart,) before she was taken in by the Hetterscheidt family and she's been living her best life ever since. Recently, she hit a monumental milestone when she celebrated her 20th Birthday.

What makes this birthday so special, you ask? It makes Auggie the oldest ever Golden Retriever!

At the age of 14, it was not likely that Auggie would find her forever home. Most golden retrievers live for 10-12 years and most people aren't interested in adopting a dog just to watch them pass. Auggie, however, was not only in her senior glory years but she had a lot more life left to live it turns out! 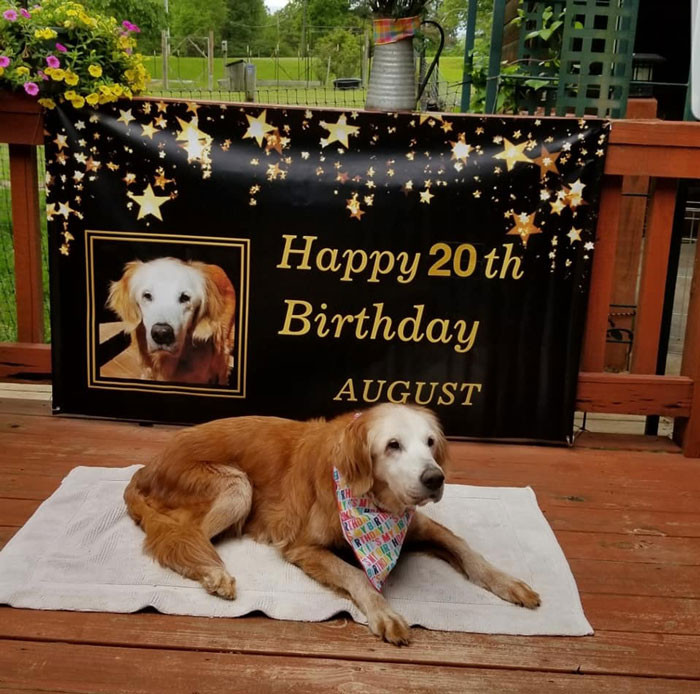 Celebrating with her humans and her dog siblihngs siblings Sherman, Belle, and Bruce, Auggie's birthday was made all the more special with a huge banner printed out and a delicious looking carrot cake.

Her special occasion was also highlighted by the rescue organization on both Facebook and their blog! 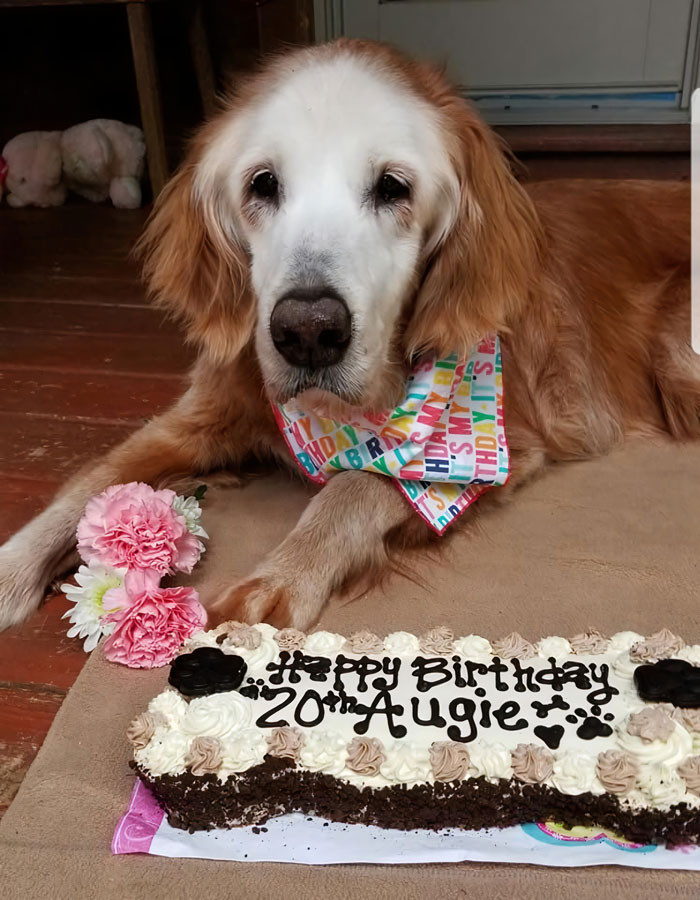 Jennifer told Auggie's fans that for being 20 years old, she is surprisingly healthy.

"She has minimal problems moving around, with a little bit of shaking when first getting up, and enjoys daily walks in the yard." 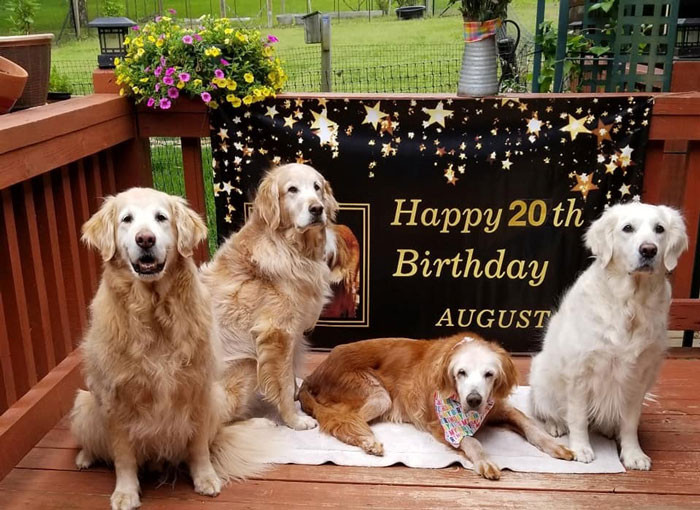 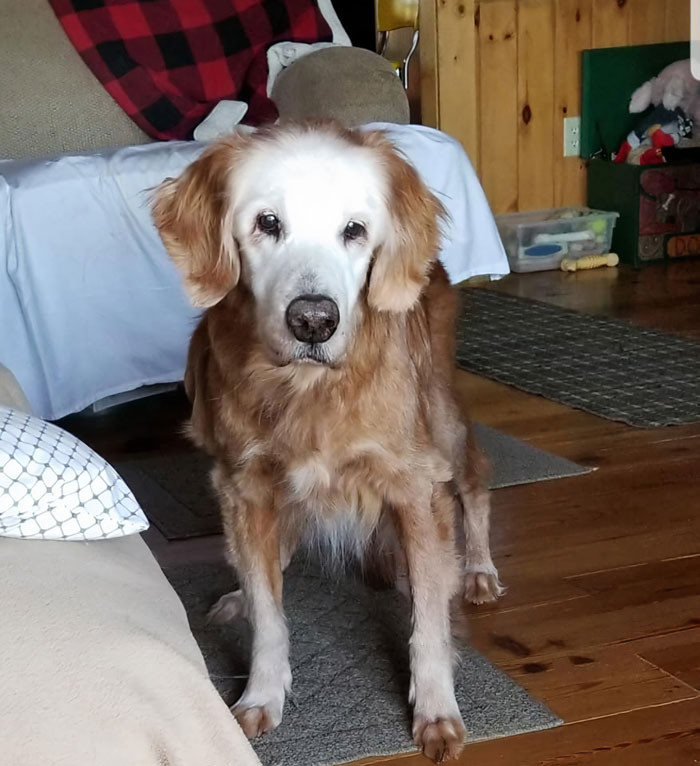 Jennifer said that Auggie eats a mix of wet and dry food and taking some supplements to help mitigate some kidney issues she was diagnosed with when she was adopted at 14. 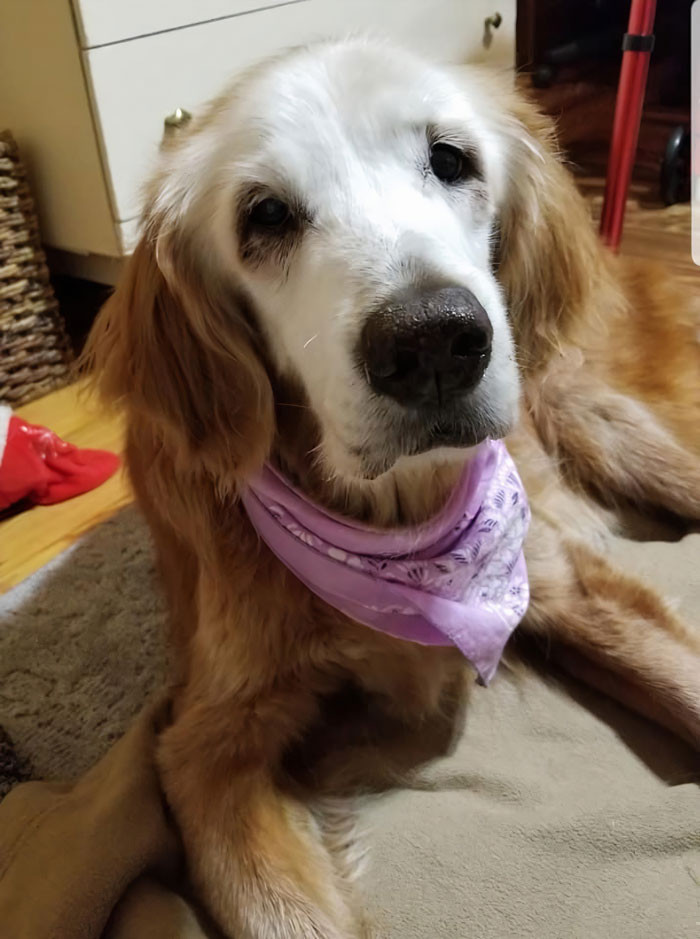 Happy Birthday Auggie, you deserve all the celebrations. 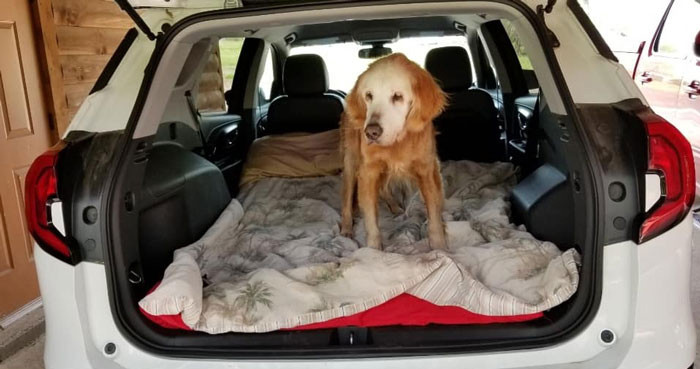 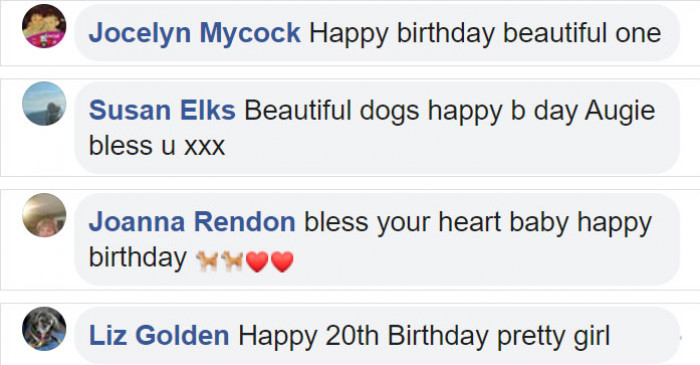 Today, Auggie's Birthday Post has over 13k comments and has been shared over 28k times! 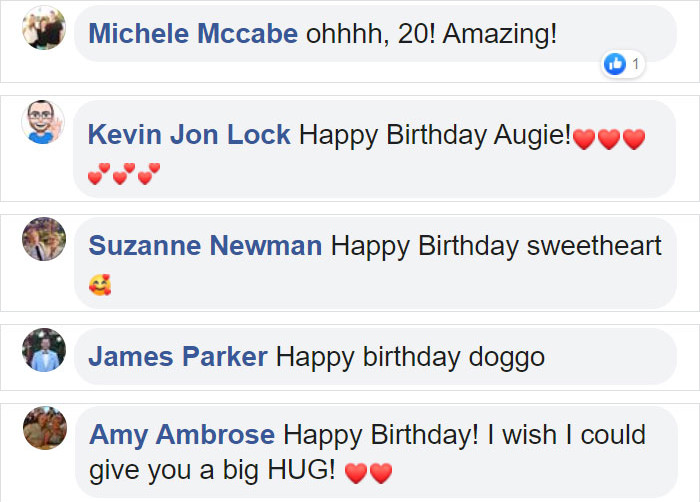 1. Listen to your veterinarian, as they will know your dog and will be able to give the best recommendations and plan actions to keep them healthy.

2. Listen to your dog. They communicate even without communicating—if you see them react negatively to food or certain activities, then change it up.

3. Feed your dog a quality dog food, as better food will ensure better health, a better mood for your dog, and you’ll avoid most of the vet bills that you’ll be otherwise saving for with poorer quality chow.

4. Groom your golden retriever regularly, as it will keep them looking their best and keep them healthy as it prevents things like ear infections, gum and teeth or even skin issues.

5. Lastly, exercise your golden retriever regularly to keep their heart and muscle strong.

Thank you GoldHeart and the Hetterscheidt family.