Pawsitively Adorable Photos Of Perpetually Tired, Chonky Catto Are All Too Relatable

By now you are probably well aware that the average cat sleeps more in 24 hours than they spend time awake. In fact, they usually sleep no less than 12 hours and as many as 16 hours.

Still, there is something endlessly endearing about a cat whose purrsonality has so much to do with their sleepy, good nature and that's got a lot to do with the reasons why one chunky, ginger cat is taking over the Internet. He's doing it with one relatable, sleepy photo at a time.

His name is Fat Xiang (or Fat “Lucky Guy," as his owner appropriately dubbed him,) and he is a tubby, ginger cat. On Facebook, he has over 30,000 followers already, so you know we became invested in his story.

Jessie, is a dentist from Taiwan who has been lucky enough to cross paths with Fat Xiang.

Way back in 2016, Fat Xiang was a stray and he had been injured in a fight with other stray cats. 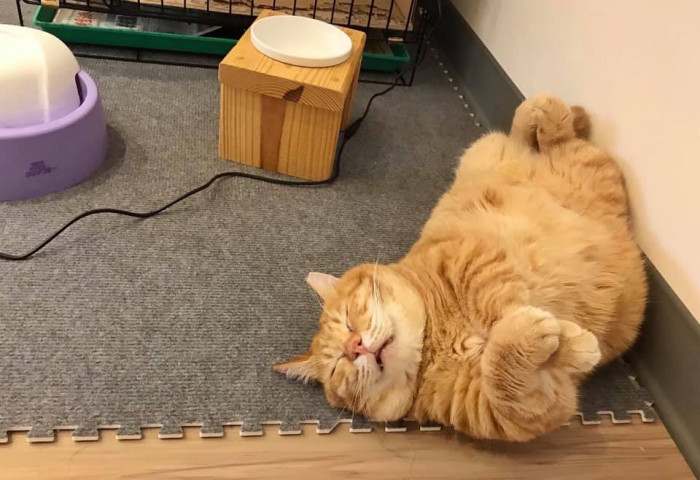 Jessie took Fat Xiang in and brought him to the vet, the news wasn't great. He had FIV.

Feline immunodeficiency virus is closely related to HIV in humans. 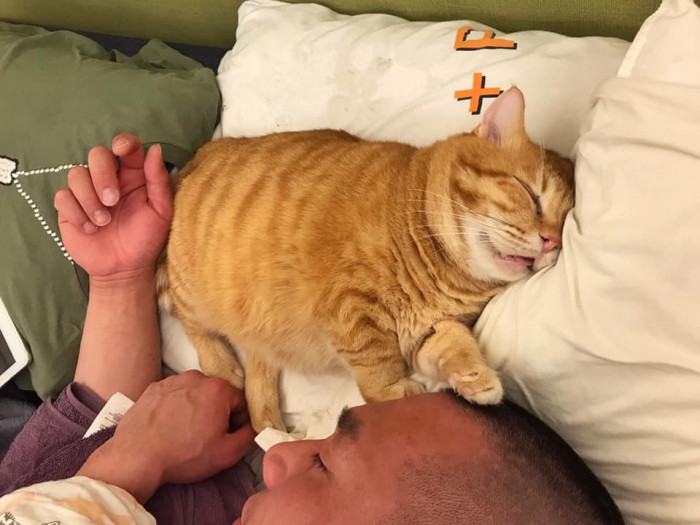 Fat Xian was originally supposed to be a TNR cat (trap, neuter, release,) but because of his FIV diagnosis, Jessie changed his mind.

In an interview with Bored Panda, Jessie said:

“I adopted Xiang in 2016. He was a stray cat and all of the neighbors liked him. Sadly, he would often get hurt by other stray cats who fought with him, and he was small and not strong enough to defend himself. So, I adopted him." 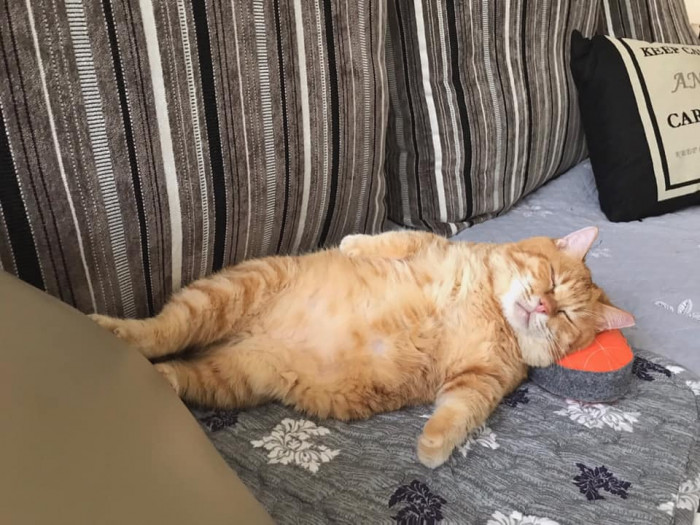 With TNR cats, the idea is to reduce the growing stray and feral population without hurting the cats. Most feral cats should stay in feral colonies and are not suited to living life with humans. 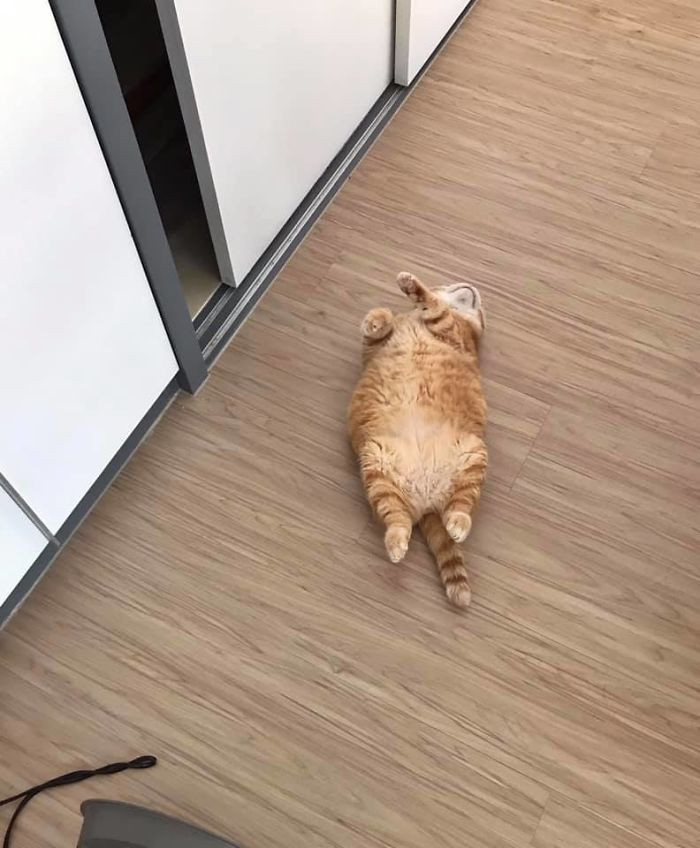 Jessie described Fat Xiang as “not a very kissy cat”, meaning he would keep to himself or fight with other strays.

Jessie was surprised to realize that Fat Xiang was actually pretty laid back and calm about domesticated life. 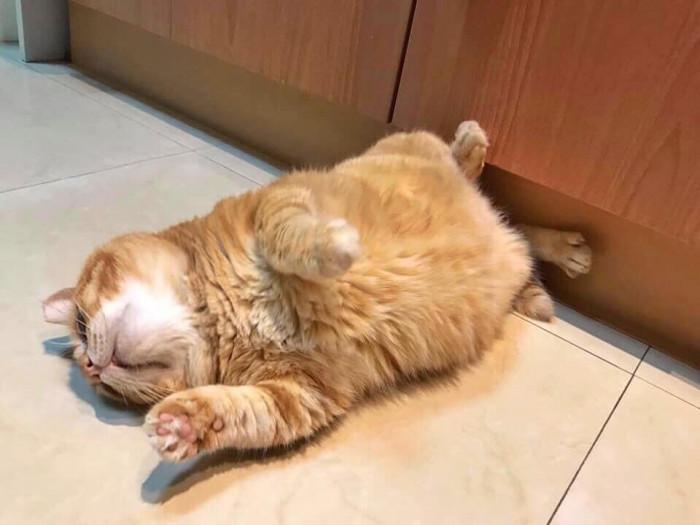 Jessie says when he calls out for Fat Xiang, the chonky catto comes stomping his way with delight.

Still, Fat Xiang seemed to sleep a lot, even for a cat. 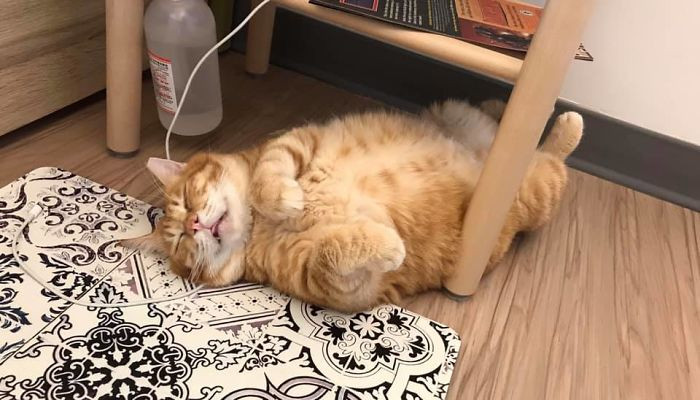 So, Jessie took him back to the vet. He said:

“He sleeps about 16-20 hours per day. I was worried if he’s sick and took him to the clinic. The vet checked his blood and X-ray, and said everything is normal, apart from his FIV. He suspects that Xiang now sleeps a lot more because he was constantly nervous in the street.” 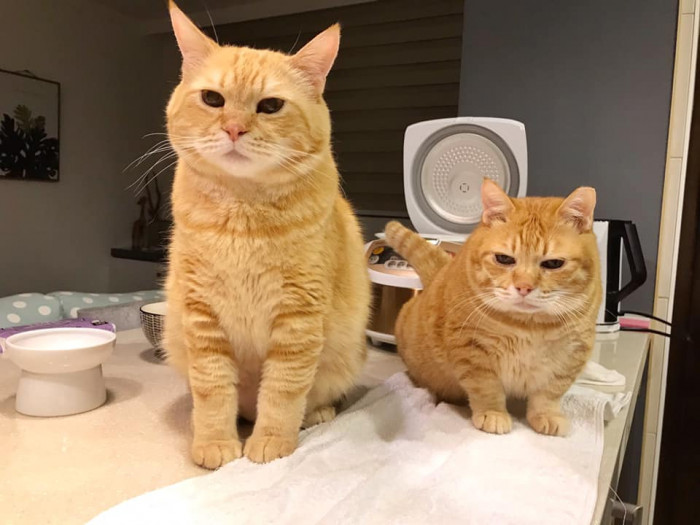 “Xiang gets things like the flu, rhinitis, and eye inflammation easily due to FIV. But he’s still enjoying his life with Shuai and us." 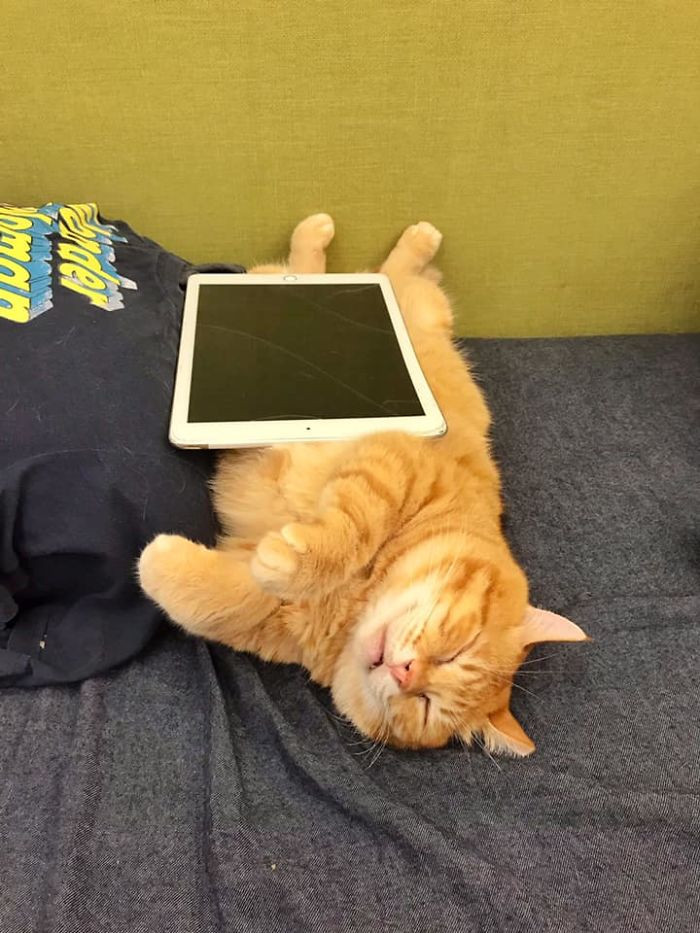 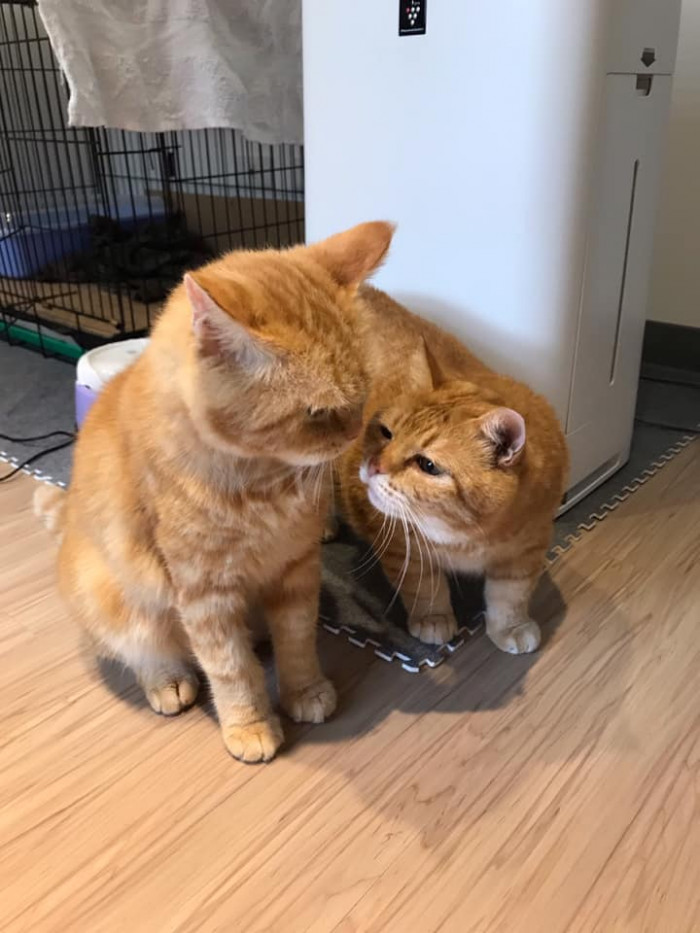 Also, despite his namesake "Fat" Xiang, he is not actually fat.

His short, munchkin legs simply give off the appearances that he is a chonky boi. 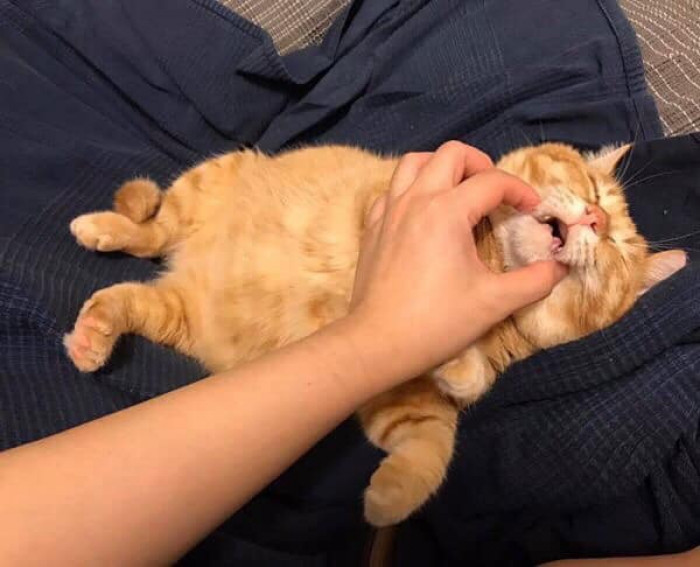 “Their fan-page is called “Run! Xiang” because I hope he is happy and vibrant. Fans always joked that I’m a liar because Xiang’s always sleeping [and not actually running].”

Xiang sleeps a lot, mostly on his back, and his love of sleep seems to resonate with humans these days and that's built him quite the following on Facebook! 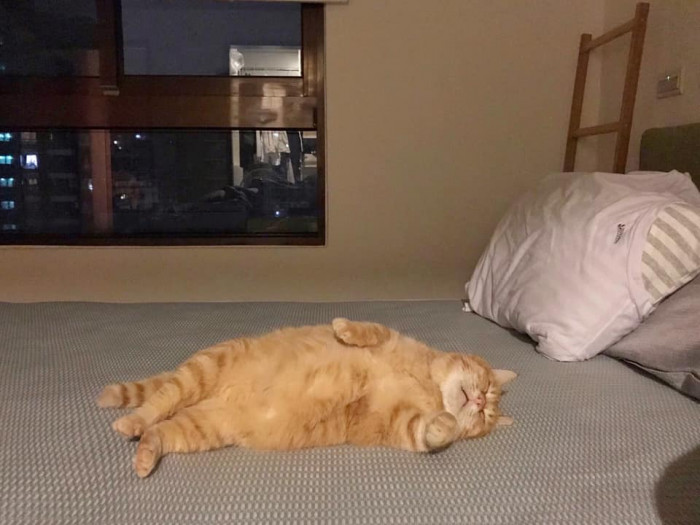 Jessie, Xiang, and Shuai (whose name means "handsome,") are living together in Taiwan.

Shuai is also a ginger catto and he joined the family in 2019 after his owner unexpectedly passed away. 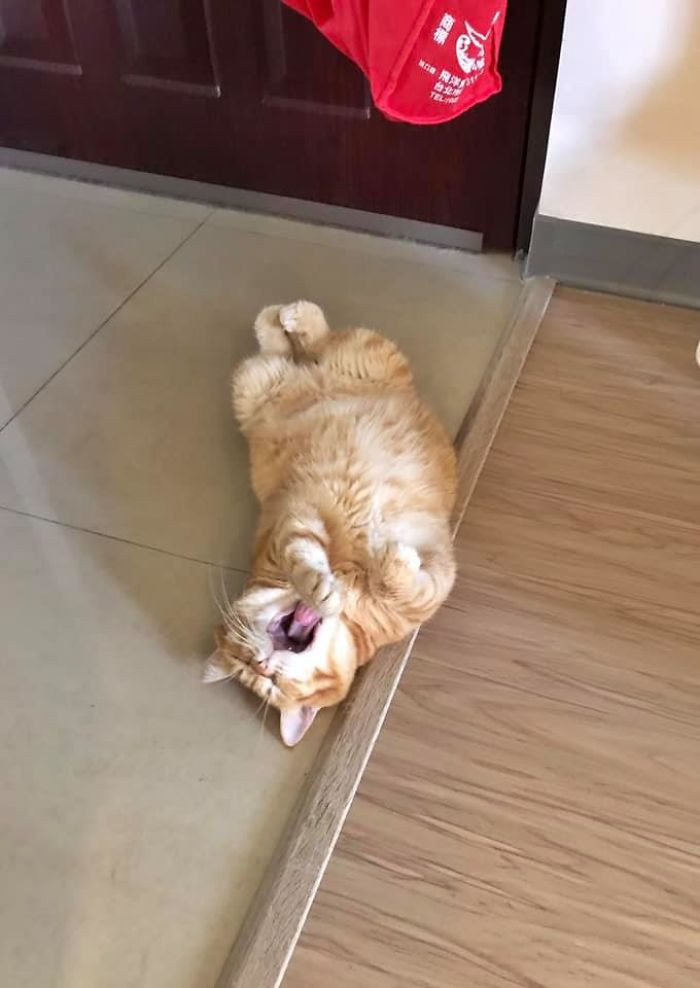 Xiang's page gets a lot of questions, curious about why Jessie doesn't adopt more cats. They often wonder if the FIV diagnosis Xiang has is an issue.

“I think life and death are natural among animals, all of them will eventually die—but if we can let them have a loving home and have them leave us within that comfort, I can bear it.” 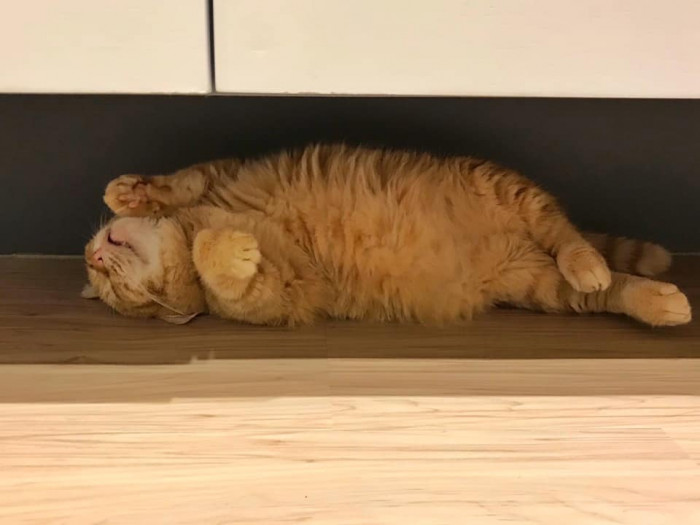 “The big difference between humans and other animals is that, whether it be financial or emotional frustration, there will always be opportunities, choices, and it will slowly get better for us humans. But, for the animal, the owner is their entire world.” 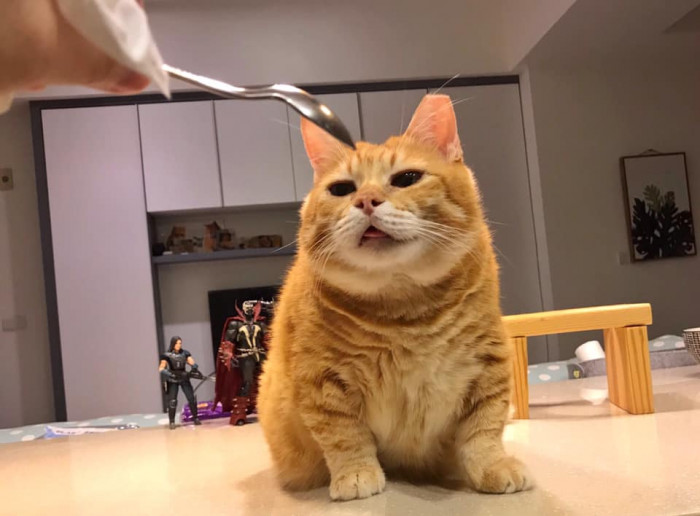 Of course, like many social media influencers who have taken in special needs cats, Jessie is also dedicated to doing his part. 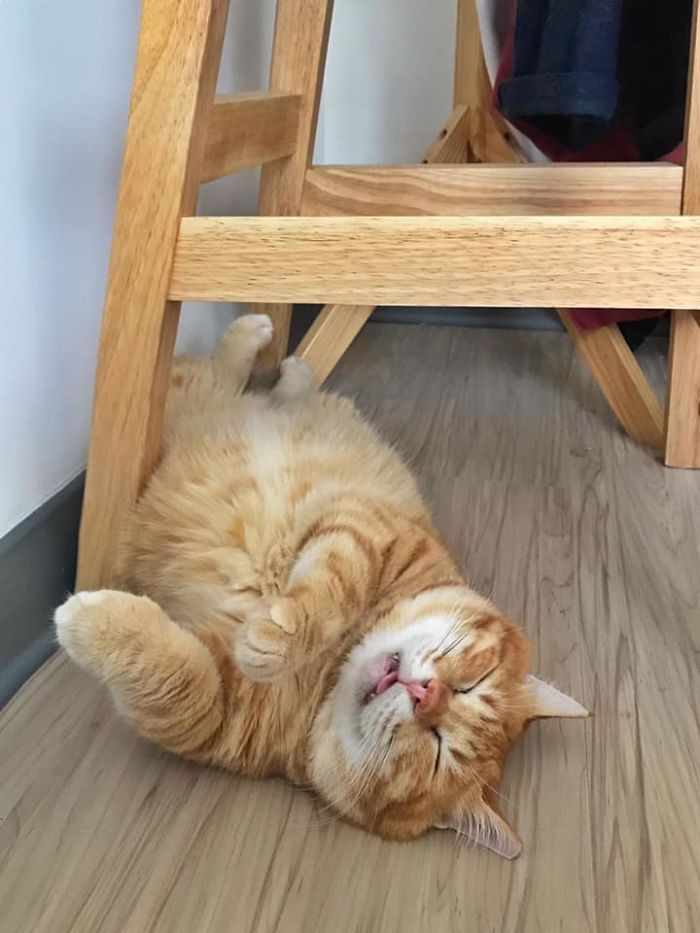 In the last year, Jessie has raised funds with calendar sales for other cats with FIV. 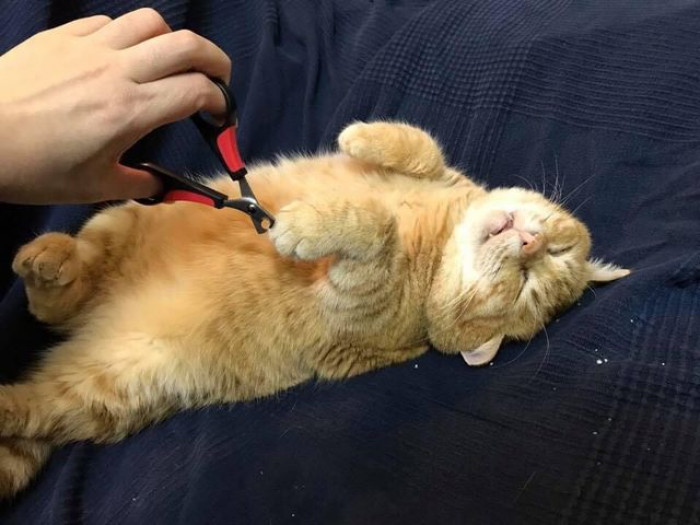 His posts about Fat Xiang continue to delight a growing amount of fans, and while there is a lot of sleep (and cattitude,) no one shows any signs of stopping. 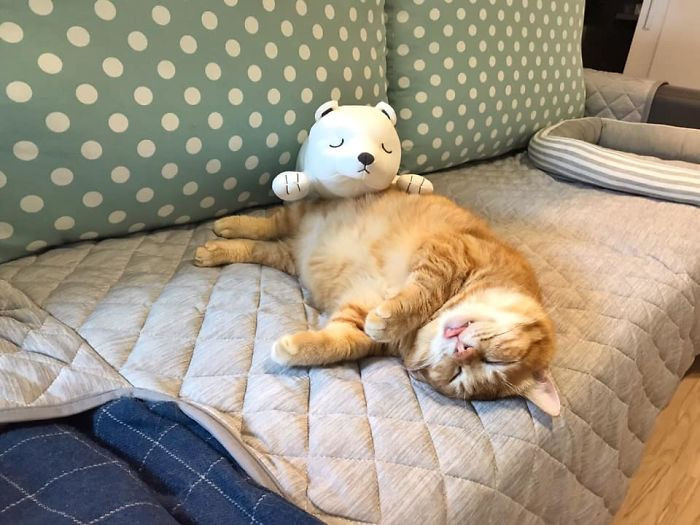 Everyone involved just has the right purrsonalities to be cut out for this job! 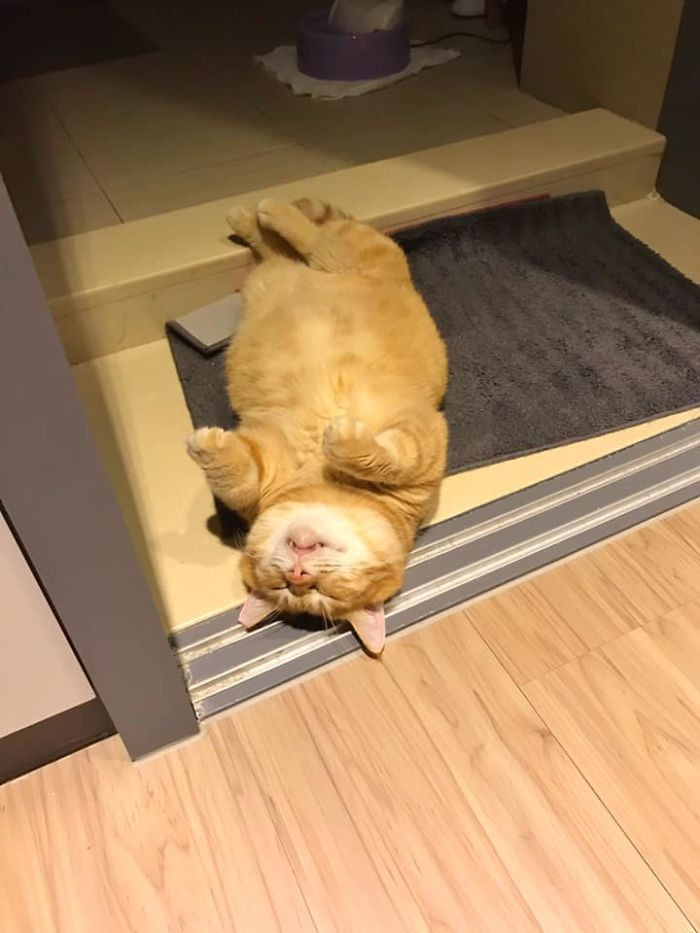