In 2008's Tropic Thunder, a lot of Hollywood controversy was both highlighted and mocked in some of the most offensive but well-done satire the world had ever seen. In 2020, we have a lot more awareness about the insensitivity and disingenuous nature of a lot of celebrities, but in 2008 it was still not as widely talked about or tackled head-on, but Tropic Thunder threw some heavy punches.

Along with being drenched in the controversy of excessive use of the r-word, Robert Downey Jr played the character of Kirk Lazurus, a white, Australian actor who insensitively pushes boundaries and gets a little too serious about his role as a black character in a Vietnam War movie. In doing so, RDJ spends basically the entire movie in "Black Face."

“I know who I am. I’m the dude playin’ the dude, disguised as another dude!”- Kirk Lazurus The question now is, did people just like, not notice?

Teenagers today are just realizing that one of their absolute, favorite, Marvel heroes, Iron Man himself, did Black Face in a successful 2008 film. 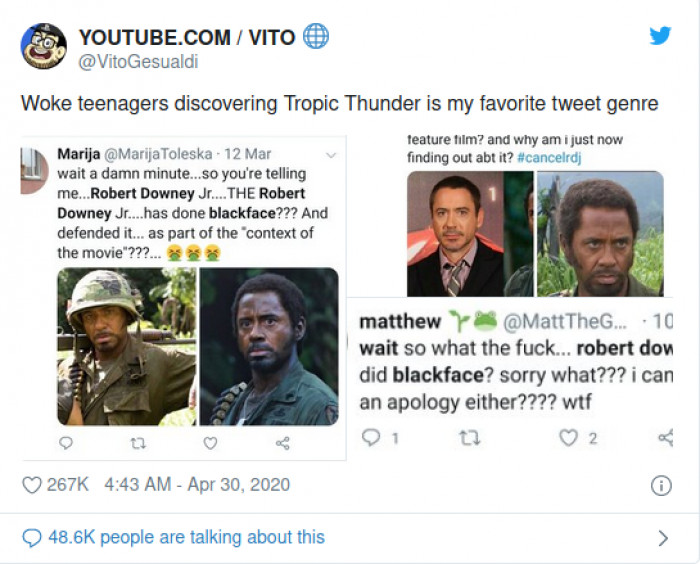 Black Face, as most people probably perceive it, is a bit different than what RDJ did in 2008.

Originally, Black Face involved negative stereotypes and exaggerated features and was explicitly racist. Today, Black Face is a little different, but it is still widely considered racist by the Black community to wear make up to darken your skin. Whether it is for art or an ill-conceived Halloween costume, painting yourself as BIPOC is not okay.

At the time, his use of Black Face was indeed brought up in damn near every review of the movie that was published.

He did not play a character in blackface. He played a white guy who was ridiculously committed to being in character always. https://t.co/SSixi7dSN7

“Kirk’s decision to make his character a black man complete with dark makeup would have been more than a tad controversial if not for Chino continually calling Kirk out for trying to act “black.”

While Al Sharpton and Jesse Jackson won’t be leading Thunder boycotts, the film has garnered a significant backlash from mental disability advocates”

At the time, there was plenty of controversy surrounding the heavy use of the r-word and the use of Black Face, but at the same time it's impossible not to watch the movie and clearly see the heavily saturated satire highlighting Hollywood's hypocrisy and preformative (insincere) allyship or portrayal of real-life issues for the almighty dollar.

RDJ went on to receive an Oscar nomination for his performance in Tropic Thunder. 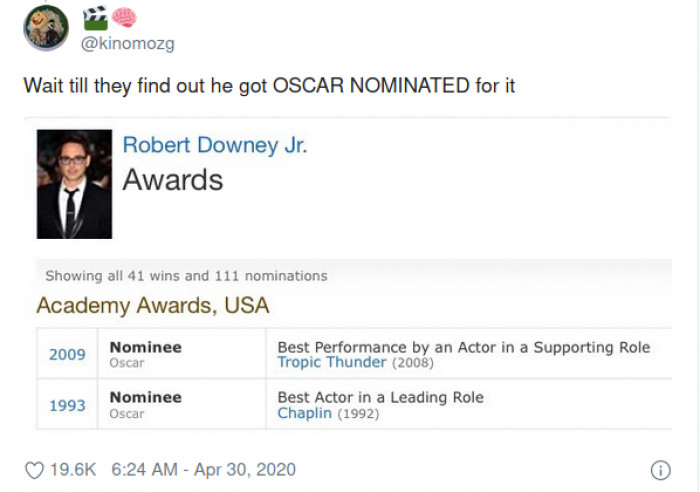 At the time, people seemed to realize this was not the sort of film we'd always be able to make.

“In some future time we may look back on ‘Tropic Thunder’ and ask, ‘What were we thinking?’ But a movie that asks Cruise to slap the air as part of a horse-riding dance popularized by the R&B singer Ginuwine takes some time to recover from. So does one in which Downey appears to be playing Jude Law playing Kirk Douglas playing the late Bernie Mac. “

In fact, it's pretty safe to say that today it would not fly.

Honestly, that's precisely why it's rather amusing seeing today's youth discover the 2008 film.

robert downey jr did blackface for an entire film but this app been so silent about it that i only just found out?? pic.twitter.com/9aYlPLILFJ

Blair Imani, cohost of "America Did What?" said point blank: 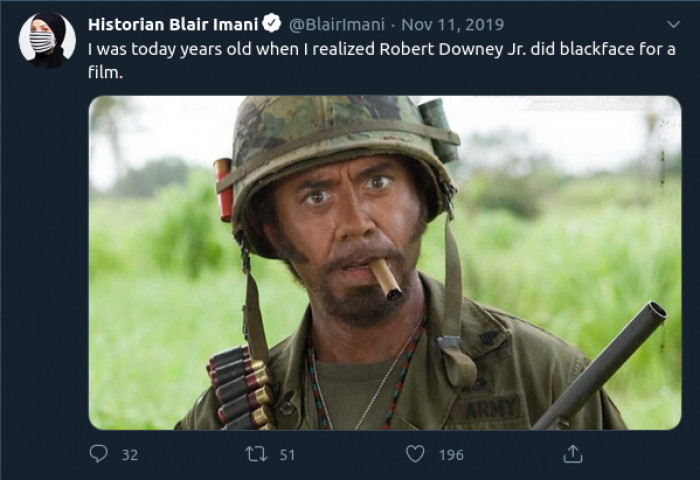 Twitter users went back and forth for days over this entire scenario.

In response to a now deleted critical tweet, another user wrote:

“‘Remember that time Robert Downey jr did full blackface to shine a light on the ridiculous practice of it for a comedy movie? What a great actor and film.’ There, fixed it.” 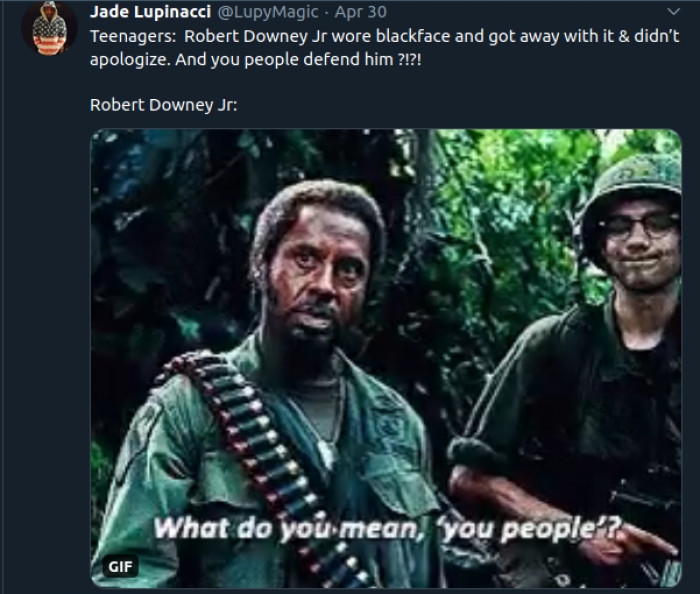 Are you wondering what RDJ himself has had to say about his Kurt Lazurus character?

In January 2020, RDJ was a guest on the Joe Rogan Experience, an extremely popular podcast in which he addressed the situation back in 2008:

In the end, even after hesitation from his own mother, RDJ decided, "I get to hold up to nature the insane, self-involved hypocrisy of artists and what they think they’re allowed to do on occasion.”