There are times where entitled people will act so high and mighty that they would project all blame towards you. You'll be manipulated to think if you actually made a mistake and if you owe them anything.

Of course, there are a lot of those kinds of people but there are ways to deal with them. If you can, best to ignore them altogether.

A Redditor posted under the subreddit (AITAH) Am I The A**hole about their neighbor barrelling in rage after 'their' avocados were given away to someone else. At first glance you would think that OP would be the automatic a**hole in this situation, I mean why would you give away someone's stuff?

But then OP recounted that they have an orchard of trees that was started by her late grandmother. Since there was a lot of produce, they decided to give it away to whoever wanted free of charge.

This was taken advantage of by the neighbor wherein one of the Avocado trees was in reach from her side and picks from there. One day someone came to OP's house and asked for two baskets of Avocados, which OP thought nothing of and agreed.

The next day their neighbor banged on OP's door loudly. Here's why:

Apparently, the neighbor had been using the Avocados she gets for free to sell to a restaurant. She had a deal with that restaurant to be an exclusive supplier for the Avocados.

The person who came with two baskets was the owner's daughter who found out where the neighbor was getting the Avocados. The deal between them was terminated because the person from the restaurant would just come by to get free Avocados from OP's place.

They did offer money in exchange for the fruits but it wasn't the OP and her mother's belief to sell them because of her late grandmother. The neighbor then blamed OP and her mother for the mishap and told them they were her Avocados while calling them names.

OP felt bad because it might've been a big part of the neighbor's income but Redditors still pointed out her entitlement. 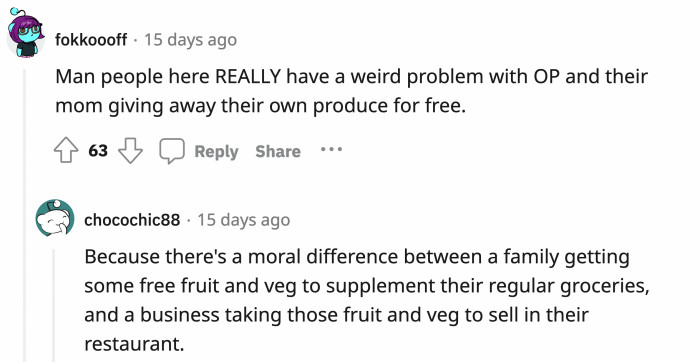 But when it comes down to it, there are legitimate simple reasons why OP didn't mind giving the produce away for free no matter how much

Although it doesn't seem like it, OP is getting a trade whenever they let others pick from their produce 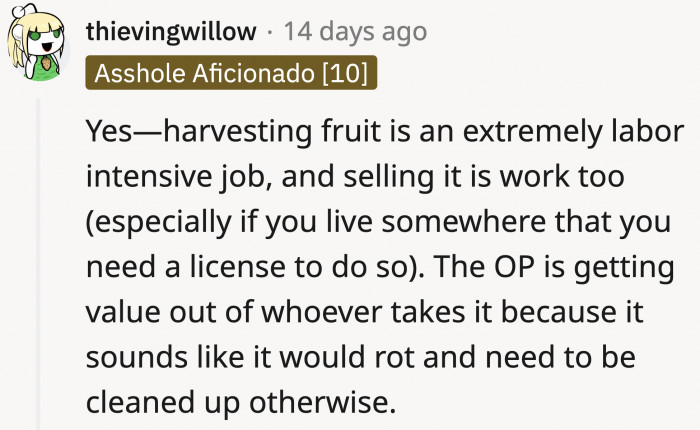 Also, keyword 'let them'. It's an exchange that OP initiated and in their mind it's not unfair 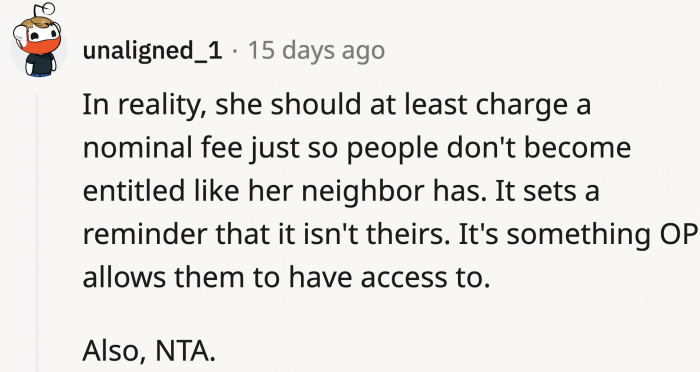 And since OP wouldn't charge for them, an alternative suggestion that would also benefit the community was brought up 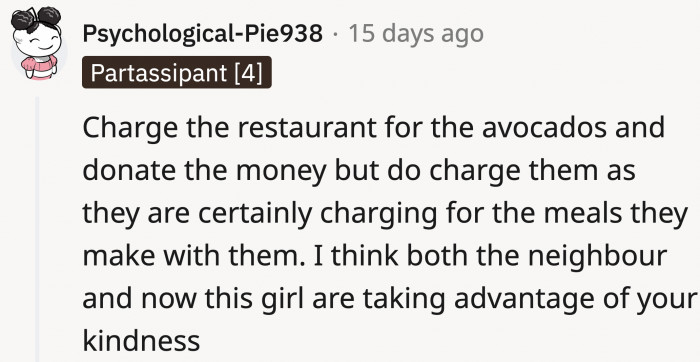 There are a few obstacles that would extinguish that option

How slow do Avocado plants really grow? Well, this long

HER Avocados weren't hers to begin with anyway

That would shut her up unless she's a complete Karen

Here's another subreddit that this post should belong to

Not much in life would come for free nowadays, especially ones that you could benefit from for a long period. One should think about being grateful if an opportunity comes like it instead of feeling entitled for it.

The neighbor OP had to deal with completely disregarded the fact that the fruits were being given to her for free without complaint. It wasn't hers, to begin with, and unless OP and she had an agreement, it would never be.

Did you think the neighbor went overboard with their reaction? Let us know in the comments.