It's not advisable to be enemies with your next-door neighbor especially if you're new to the area. However, if they keep leaving dog poop on your yard, it makes it challenging to be cordial with them.

This was the exact situation one Reddit user found themself in. The original poster (OP) shared in Reddit's famous Am I The A**hole (AITA) sub that he recently moved into his new home when he noticed the stinky problem.

Not knowing who was the culprit, OP decided to clean up the mess before mowing his lawn. Much to his chagrin, a fresh batch of dog poop is present on his newly mowed lawn.

Now, bothered by the irresponsible behavior, OP is on the lookout for the serial pooper. The new homeowner quickly saw that his neighbors have a shaggy dog that they allow outside a few times a day.

The OP witnessed the dog sniffing around the area and when it was ready to conduct its business, it would go over OP's yard. As if trained that way, the dog pooped on the yard 2 to 3 times a day.

Since OP is new to the neighborhood, they were unsure how to broach the subject to their neighbor. OP cleaned up after the dog for a few weeks, making sure that the irresponsible neighbors watched every time.

OP's chance to confront the neighbors one Saturday afternoon while gardening. They had a friendly conversation and a few minutes later, OP mentioned the pooping incident and asked if the neighbors would be so kind as to pick up after their pet.

If this was a sitcom, the two neighbors would shake hands, the pet owners will apologize and swear the embarrassing situation will not happen again in the future. But this is Reddit and the neighbors didn't behave that way.

This is the question as posted by OP:

You can read the first part below

The pet owner had the audacity to laugh and blame it on an imaginary stray dog!

OP has a new problem: his new neighbors won't take responsibility for their pet's behavior. Our patient Redditor decided to position their door camera towards the yard.

This would give OP plenty of evidence against the serial pooper. A week's worth of video evidence proved that only the neighbor's dog was responsible for the dried poop on OP's yard.

Evidence in hand, the frustrated homeowner approached the wife of his neighbor about the dog poop problem. Once again, they denied that it was their dog and basically shrugged it off.

OP approached the problem with a creative (and sporty) solution.

Fed up with their denial, the Redditor grabbed a pitching wedge and pretended the dried dog poop was a golf ball. Needless to say, the target was the irresponsible dog owner's yard.

OP was shameless with their version of justice and played weekly in broad daylight. They were enjoying the free golfing sessions until the neighbor's wife aggressively approached them.

The neighbor's wife yelled at OP and used every insult she could think of. OP cooly responded that they were simply returning the neighbor's property.

Because of this, the neighbor's wife called the police but OP never got a visit from them. The neighbor's dog also stopped 'gifting' OP with its poop.

Problem solved but now OP wonders if they went too far with the poop golf. What do you think?

Some commenters asked if OP showed the video evidence to the neighbors. OP alluded to it but never really showed the cinematic version of their dog pooping.

Reddit was on OP's side and the verdict is: OP's not the a**hole!

The commenter was understandably concerned about the relationship between neighbors...

...However, we counter, would you want to be cordial with someone who has repeatedly lied to you and made you doubt what you've seen with your own eyes? This commenter seems to agree.

Another commenter summarized the events hilariously

A practical and more permanent advice for OP

Another comment praised OP for the petty (but necessary) behavior

Do they have the same neighbors?

This redditor who couldn't resist a punny opportunity

An example on how your neighbors will walk all over you if you let them. Petty revenge is the answer!

These two seem like a lovely couple, we hope they have a good life 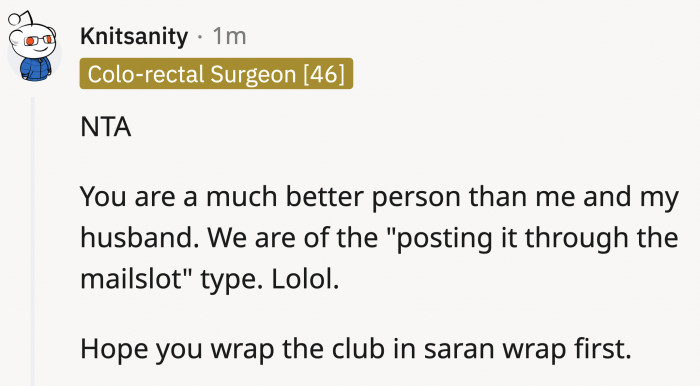 Part of being a responsible pet owner is making sure you clean up after your pet. Some states and neighbors penalize pet owners for not picking up their dog's poop.

The neighbors were still lucky that OP didn't report them. Unfortunately for them, their new neighbor knows golf.

The situation could have ended up differently if they just owned up to their lapse in judgment. What do you think, was OP wrong, or was it fair retribution?

Sound off in the comments!