There are things that are plainly right and wrong, it's not black and white, it's also not complicated. If you hear the words, "I'm gonna have a wheelchair-accessible van towed" that would be basically wrong, right?

Listen to the story of this Redditor under the subreddit 'Am I The A**hole?' but rephrased as 'Will I Be The A**hole?'

OP lives in an apartment building where acquiring your designated parking spot takes more than just paying it off monthly. They are limited and there are specific rules on how many spaces one can get per tenant.

OP recounted that a family with two wheelchair-accessible vans moved in and was given the handicap spot for free. On one encounter, OP met them because the mom parked in his spot and reasoned that it was more accessible if she was with her kid who was in a wheelchair.

Not wanting to inconvenience the family, OP went to the leasing office to look for another spot but unfortunately, another one wouldn't let up for a few months. OP couldn't really give up his spot every single time since he worked until 1 am and any other place to park is too much of a hassle.

The mom cried and called him heartless for not wanting to give up his spot and things escalated from there.

OP explained that there was another handicap spot on the other side of the complex and the one they already have is in front of their door. Also, not having his spot wouldn't inconvenience them since they only need one van to transport their kid and not simultaneously.

After OP decided to not relent, the mom parked in his spot several times and he would always leave a not to remove the car or he'll have it towed. The last straw was when he had to park on the bank's lot (semi-near the complex) because he was occupied and the mom's car wasn't moved even when asked.

Another reasonable option rather than aggravating other tenants

Here's a story about someone who made it work albeit not wheelchair related, the routine of car trading was something the family can do

OP would essentially be left with nothing, unlike the family that has other options

It could've been a way around the issue but if the mother is going to be stubborn, she would ignore any law 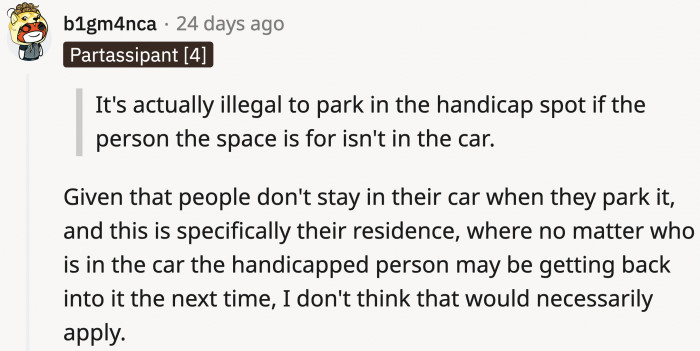 If OP is still wondering if he'll be the an a**hole for towing, Redditors got his back

Tow away and maybe they can pay the company with their entitlement.

In light of that decision, her son wouldn't lose the convinience of having the car near altogether

It it his right and after going out of his way and still being treated bad, he should do what needs to be done

A general rule when you're dealing with people like the mom

Compassion can only be received so far by those who would like to take it as submission to their entitlement. People with disabilities should have the resources that they deserve and people who make excuses and paint them in a bad light should think twice if they would be more badly affected.

The mother can deal with the consequences if OP would choose to have her car towed, there were technically multiple warnings already. Leave a comment if you think OP would be the a**hole for doing what he needs to do.