Whatever you may think as a grumpy adult, frowning on the youth of today with their constant screen time and expensive designer brand clothes, today's kids tend to have it a lot rougher than we realize or give credit for. Kids today are held to such high expectations and everyone's nose is in their business, constantly. Parents use social media to globally shame their kids and broadcast their punishment, and everyone is constantly arguing about spanking: do kids need more of it or none of it? No one can agree.

Despite all of that, most of the time kids are good kids, innocently navigating through life the best they can under the pressures and circumstances of our far-too-social environment. Some of us feel inclined to try and stick up for kids and the bad reputation they burden. Then kids like this come around and even the most optimistic of us are groaning and rolling our eyes over the absurdity and rudeness of their general disposition.

For one Twitter user, Isabel, the interaction she witnessed on the subway was impossible not to share. Some snot-nosed, bratty kid managed to sprawl out over 2 or even 3 seats on the subway. Pinned next to his guardian, both zeroed in on their devices, blissfully unaware of the world around them or how rude the child was certainly behaving by taking extra seats during a busy time of the day on the subway. 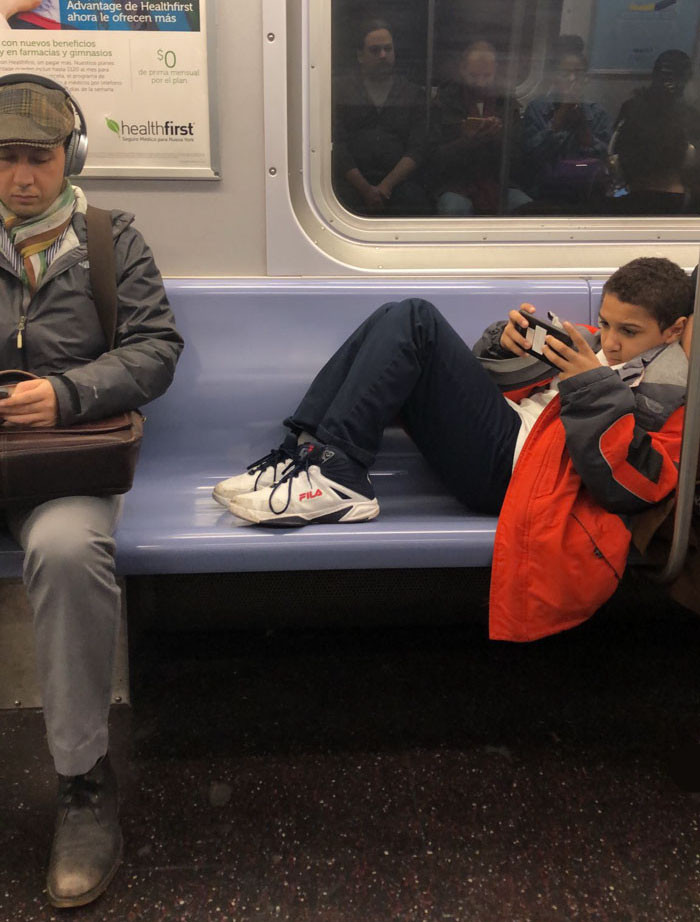 However, the instant karma she witnessed was too hilarious not to share.

Surely, a small collection of nearby passengers sent disapproving glares in the direction of the child, and a few hushed whispers in condescending tones were probably exchanged at his expense. Even Isabel quietly sat back to take a picture, stunned by the rudeness of the "lil ass," adding a hashtag #mykidcouldnever because she would, presumably, never allow her child to be so rude to fellow passengers.

But not everyone is a quiet busybody, looking down on others. In came one man, a hero some may call him, looking like Elton John and emulating the same potential sass, tired of standing on the subway when clearly there was a seat he could sit his rump in, and took charge. A man of action, unlike the befuddled onlookers. 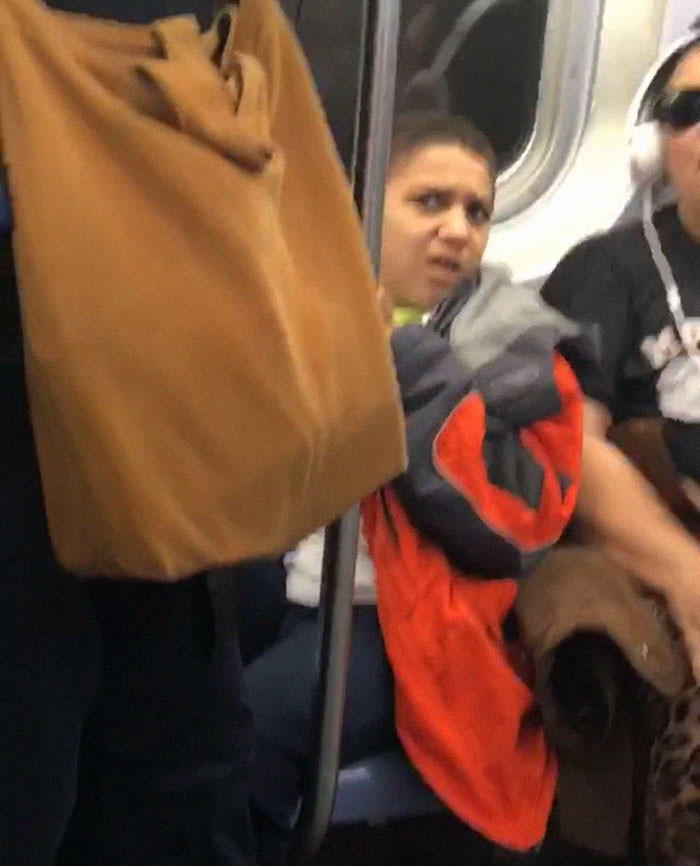 If a picture could say a thousand words, the look on this kid's face says a lot about reality smacking him via butt to legs. 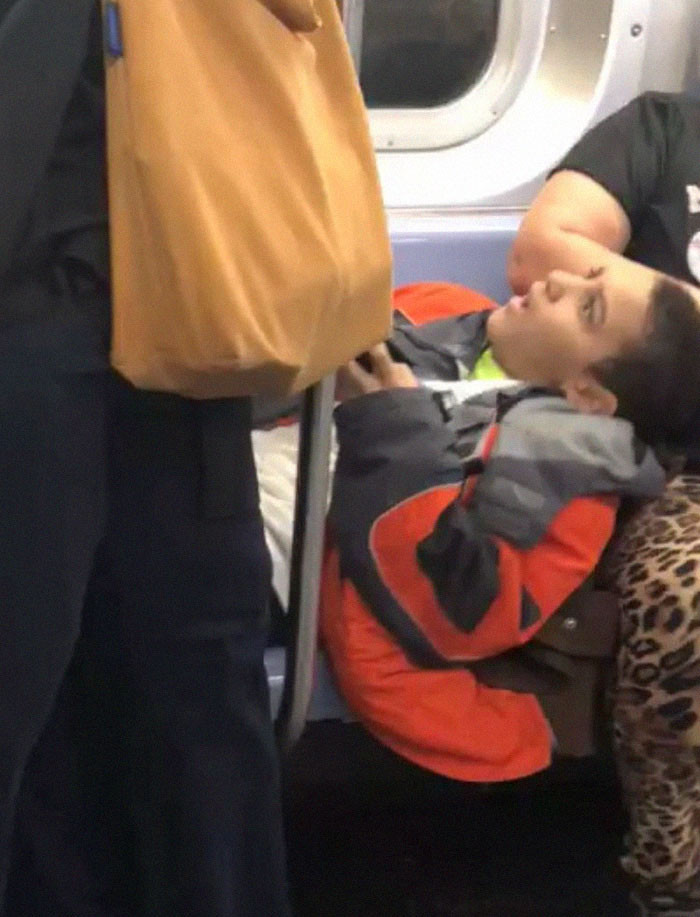 His near-absent guardian half-sassed some sort of defense but it wasn't very effective. Shout out to Isabel for capturing not only pictures of the karma-induced hilarity but this video was sound evidence as well.

You never know what's going to go viral on the Internet these days and considering how hard some people go in to defend the innocence of children, the rudeness of this child and his guardian and the heaping dose of butt karma they got on the subway resonated with a lot of people who have probably witnessed similar circumstances (or been the guy standing when a seat could be arranged if not for someone being rude as hell.) 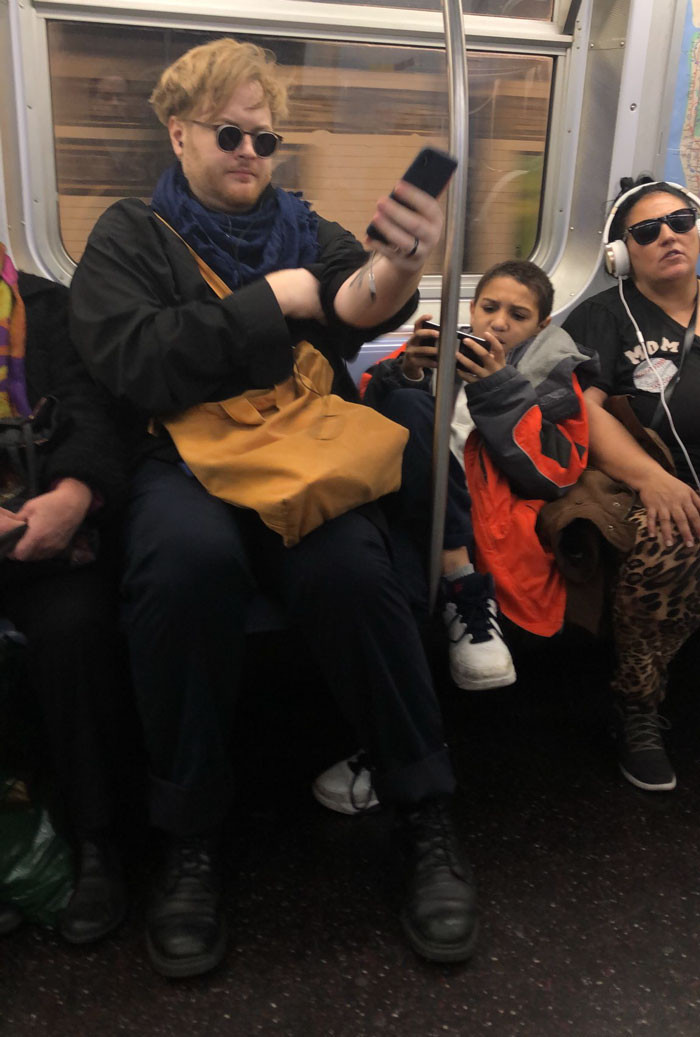 The Internet sounded off (naturally,) because that's what we do when things go viral.

None of us can get over how much this guy issuing life lessons looks so much like Elton John.

Plenty of people wanted to know how it even got this far, but the apples never fall from the trees.

Most people want to see the younger generations be kind to the older generations. Maybe more kids need to be sat on?

And we love this joke added in, because he probably does own a cape and he should definitely wear it when he sits on rude kids.

He will now be spotted. Don't be surprised if he gets a fan page on Instagram or Facebook.

He might need more life-lessons from new-age Elton John, too.

Some crimes are worth the time.

No worries, that assertion of assault was quickly dismissed. (But even then, the charges would have been worth it, just saying.) 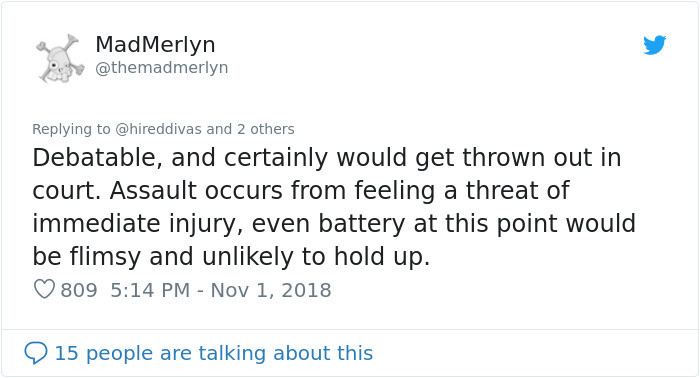 The only question that remains? What would you do. I know what I'd do...