Society literally demands some things from us, and we do them even though we know they are scams. We do it so we wouldn't become outcasts while screaming inside - "Common, people, don't make me do this! This is a scam and a lie we all choose to believe in!"

The problem is that even our society doesn't believe in these scams. Still, we are all conditioned to think it's a normal and desired behavior.

Of course, this applies to both sexes, but there is a general feeling that women are under more pressure than men. Let's face it, who is in charge of everything society considers important?

Home, family? Yes, it is up to women to keep everything together, work full time and look gorgeous while doing it (we understand the controversy of this statement, but that's what the commercials say!).

Reddit user going by the name u/jacklsd asked a question: "What is something that's clearly a scam, but women have been conditioned to believe its normal?" The answers quickly started coming in, and the general feeling is that, even though we've progressed so much in the last century, there is still much to do about gender prejudice.

1. What's up with the price difference? Same space, same food...

2. And the price for hair and makeup is also higher when it's for a wedding.

6. It's the same length. The only difference is that it's on a woman's head!

One of the most common scams women mention is the Big White Wedding. And we guess it sticks because it is a big industry, and the big players are doing their best to keep the hype going.

According to Ibis research, the wedding industry in the US is worth $51.2 billion and had an 11% growth this year.

9. Men watch too much adult movies...

10. Not a problem or a health issue 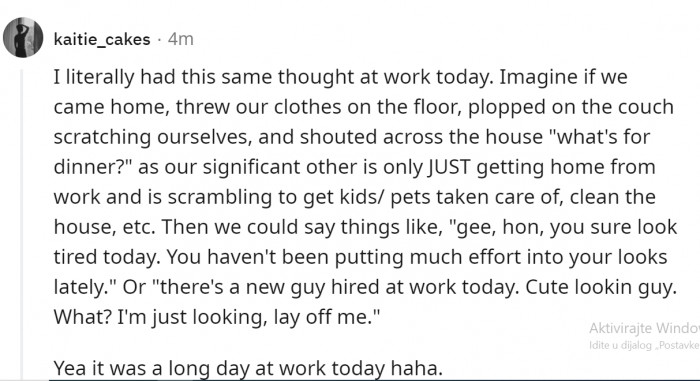 17. Always wear makeup! You must be pretty for men!

18. Actually, male birth control pill has passed the first round of clinical testing in the US

20. If you don't want kids, don't have them just to please someone.

These posts show that women are under more pressure than men. Maybe that’s because nobody expects much from men?

But it’s funny that, subconsciously, society has such a high opinion about women and expects a great deal from them but treats them poorly at the same time. We should all work together to change that and tear down gender prejudices.