2020 has been a tough year for many of us. People are getting sick and dying all around us, the economy is taking a plunge, people are losing their jobs… But some good came out of all these lockdowns and quarantines.

They made people work from home, made many families closer, and unlocked creativity we didn’t even know existed. Some of us use that creativity to find new ways of balancing our work and family life that are now all mixed up, while others are building really cool stuff.

One dad from London chose the second option. Dylan created a replica of Diagon Alley from Harry Potter inside of his daughter Ella’s wardrobe, and she was overjoyed.

Dylan told the reporters that it took months to plan out how he would build the miniature version of Diagon Alley. “I used mainly wood and MDF, but also I found wallpaper, for example, with books printed on it, which really helped make it look good but take less time.” The actual construction works lasted from August 24th to the end of September - Ella’s birthday.

“I wanted to do something special for Ella after homeschooling while I was working too and staying in so much. Inspiration happened one lunchtime standing in the room wondering what to do with it, and it occurred to me that even though it was not much use as a room, it felt like a mini street as we live in an old Victorian terrace house,” Dylan said.

A wonderful dad constructed a Harry Potter-themed birthday present for his daughter, Ella 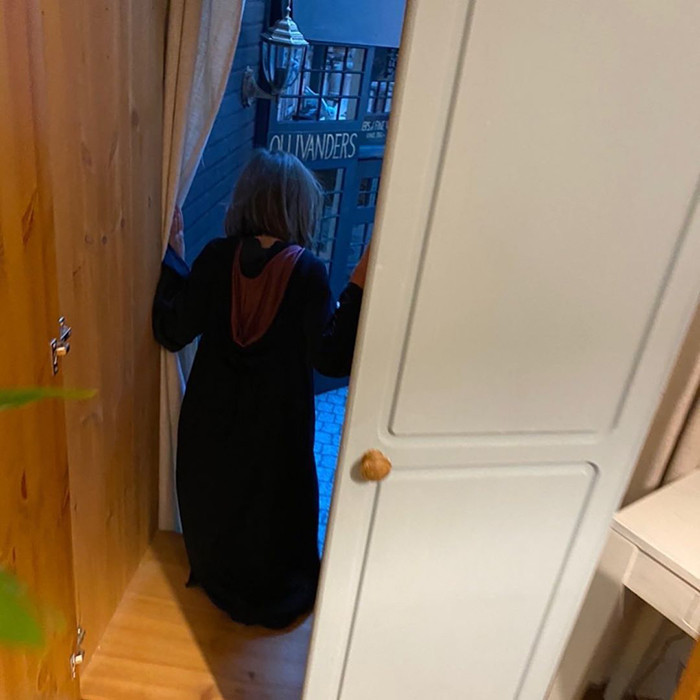 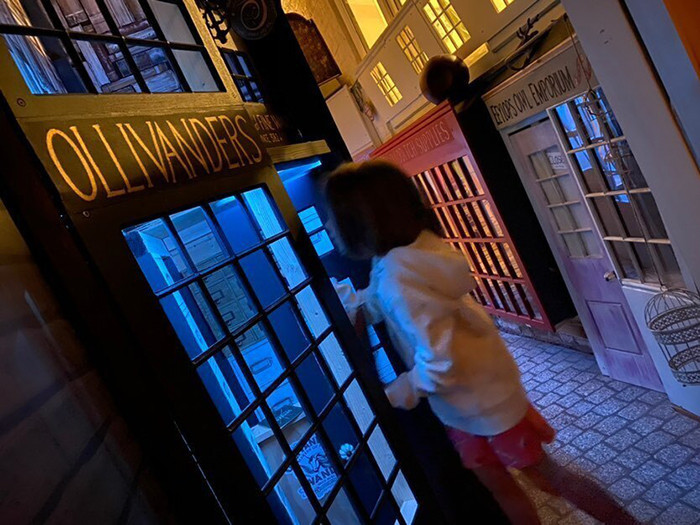 Dylan then purchased the necessary things on the internet to put in the tiny shop windows. “The street surface is Lino which is soft and warm to walk on. I also live in a street of many kind people, so I was given old photo frames which I used for shop windows,” he added.

Dylan first constructed a street model, then made orders for the wood, and also sent complete plans of the storefronts to his buddy Rob from R Concepts at Shepperton/Pinewood Studios. Rob then created the shopfronts.

Dylan says that his friend can “literally build anything” and actually constructed a car from scratch last year. “Then mainly I had lots of frame building and painting to do. It was a bit of a marathon doing it on my own, but music helped me through,” Dylan said.

Inside Ella’s closet is a tiny version of Diagon Alley 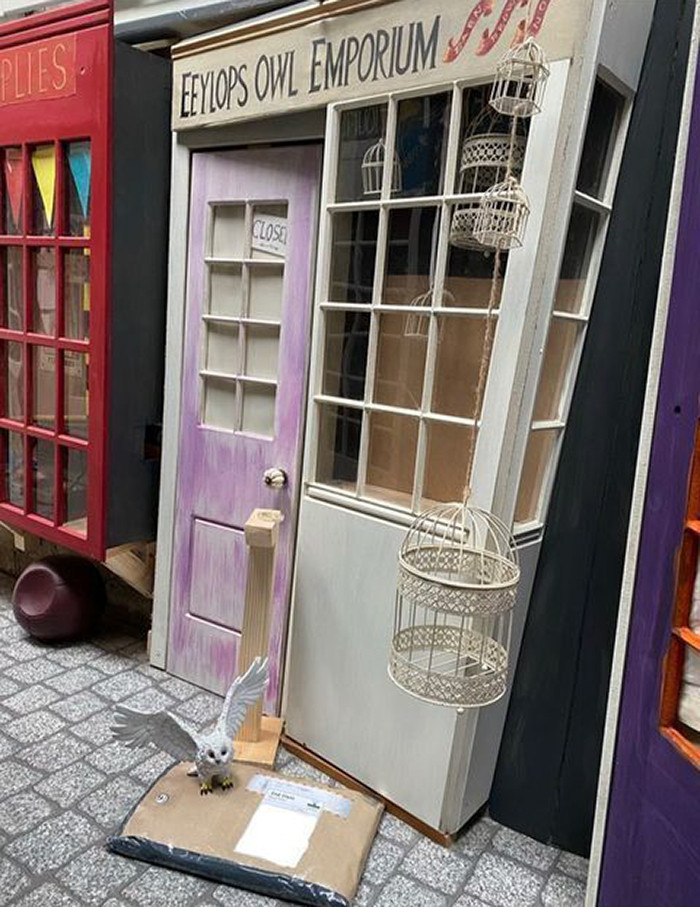 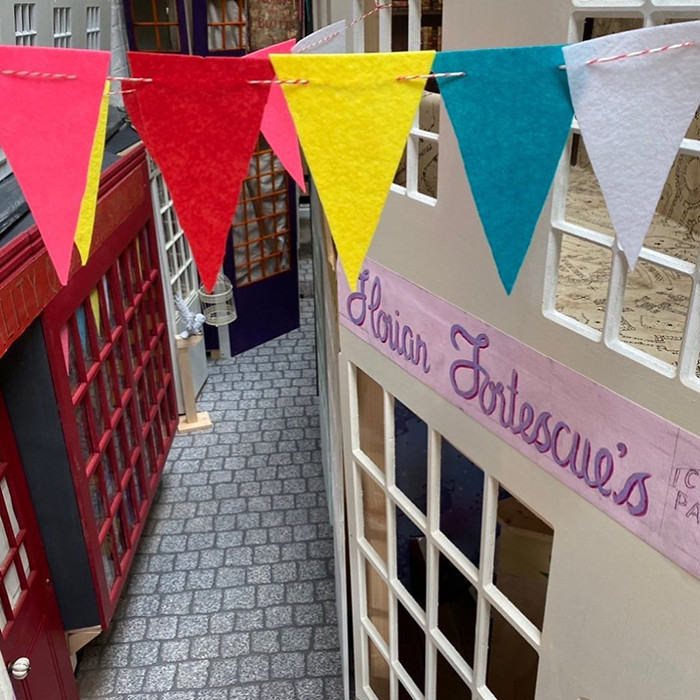 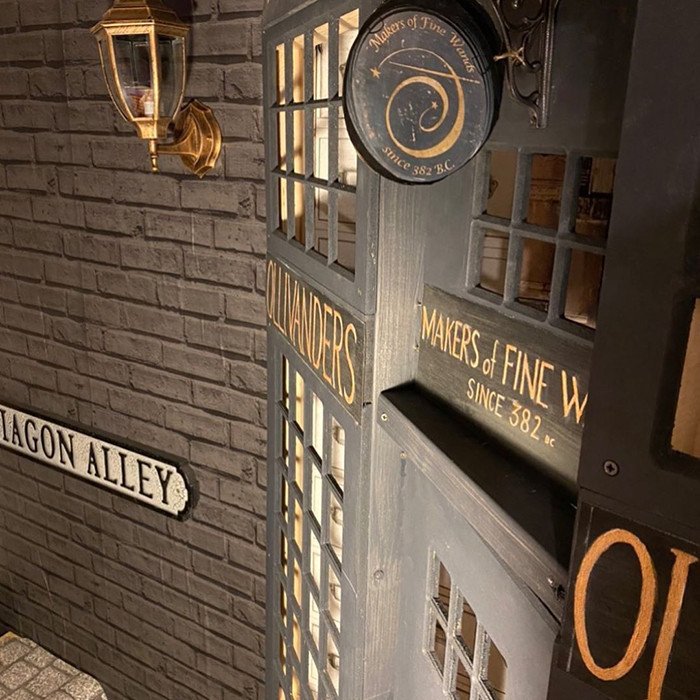 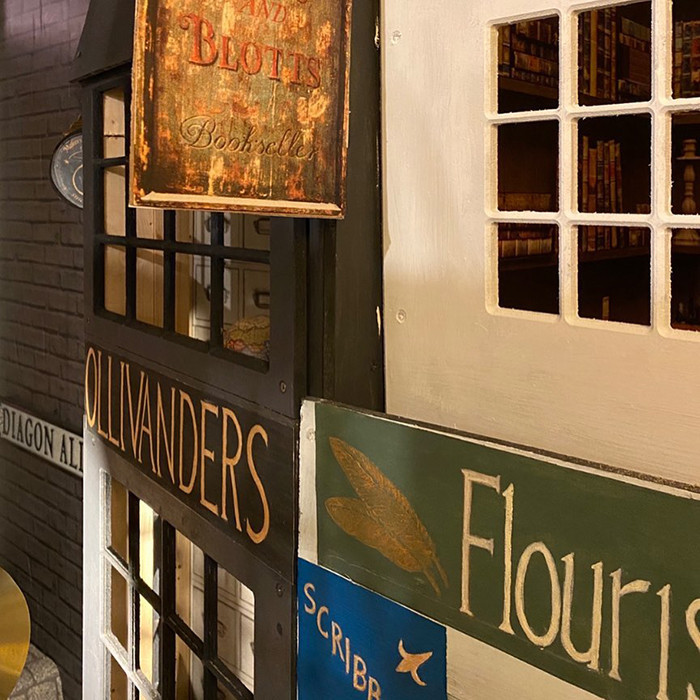 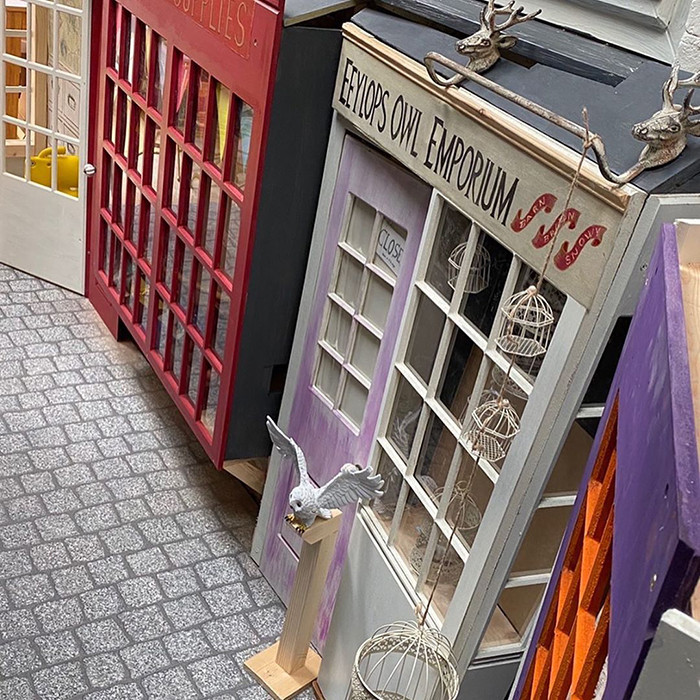 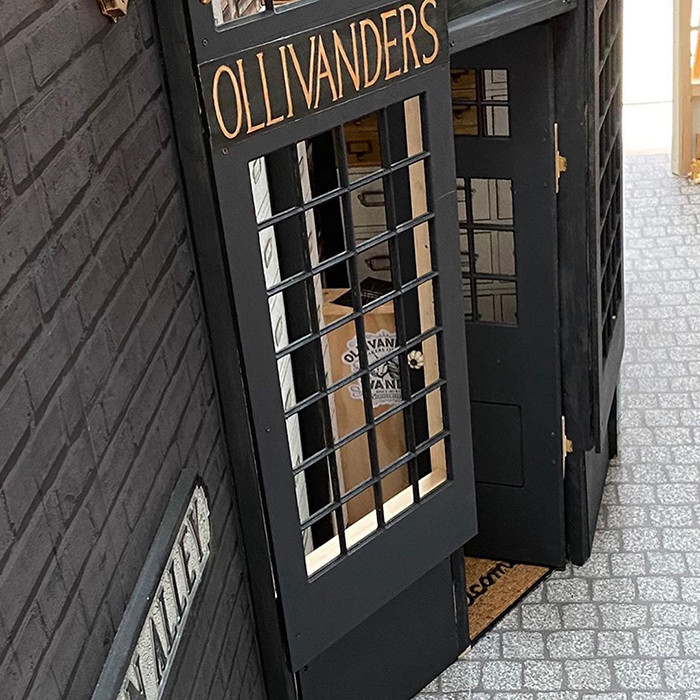 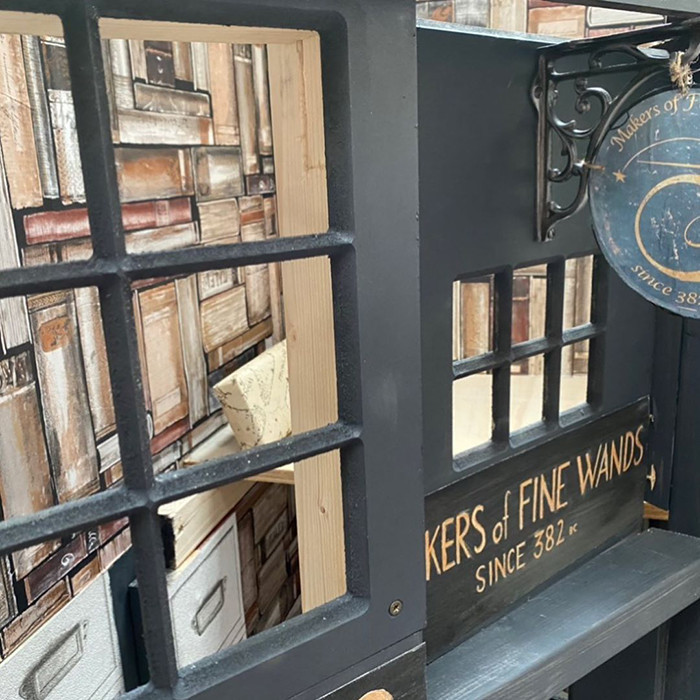 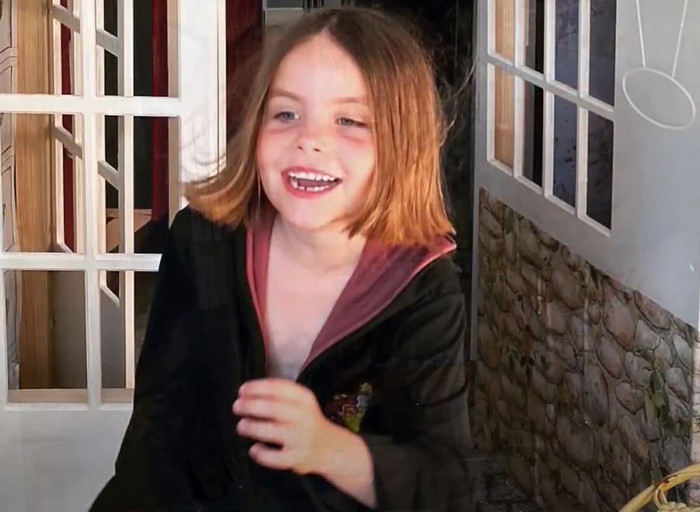 The tiny Diagon Alley was a surprise, so Dylan had to find a way to keep it secret from his daughter.

“So we played hide and seek when she got home from school. After a few goes, she decided to hide in the wardrobe which had a curtain behind it. She didn’t find it straight away, but she also knew I had made something for her so her first words were, ‘I can see something in here,’ then silence as she walked in and then, ‘Can we keep this here forever?!’”

Dad and daughter explored all of the stores together, and she opened the gifts he had placed in each one.

“We played for the rest of the weekend, for example, making ice cream in the ice cream shop with a machine I found. I also dressed up as Hagrid, which was hilarious for us both as my accent was terrible, but we went back through the wardrobe to the muggle world as Ella and Hagrid and took cushions from her living room for her reading nook above her bookshop on Diagon Alley.” 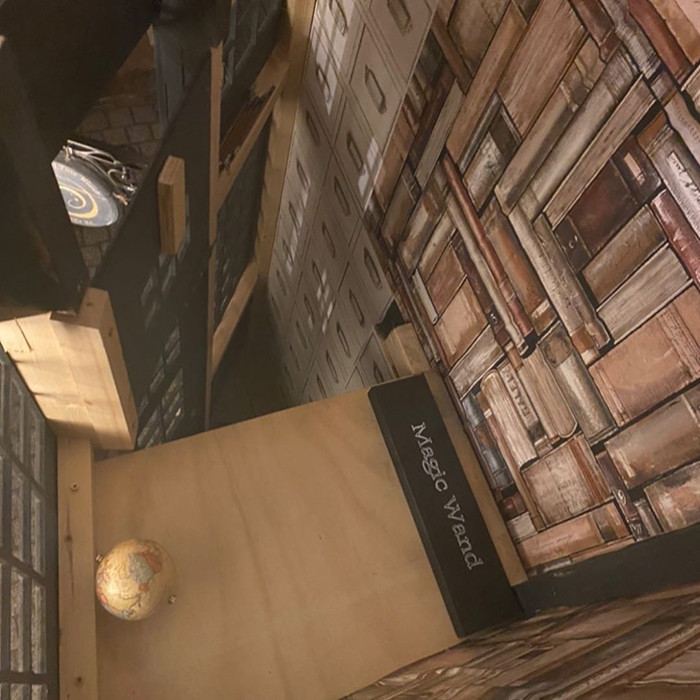 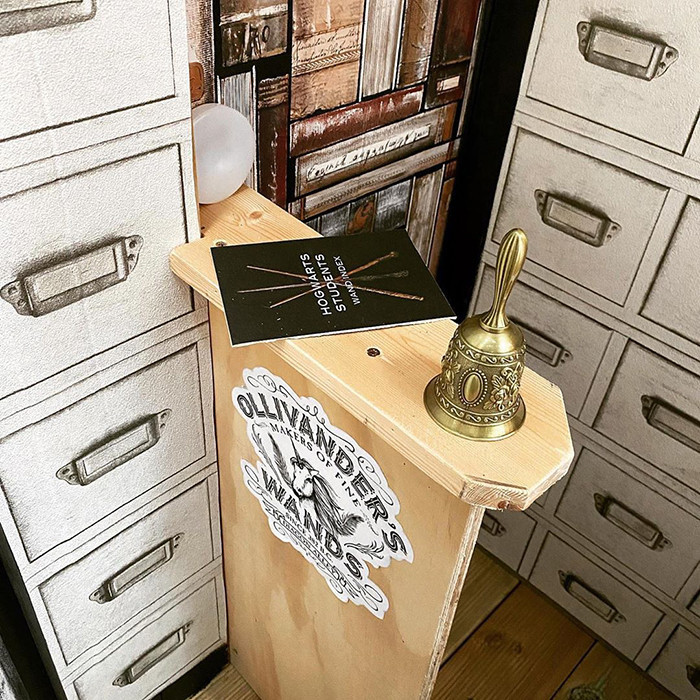 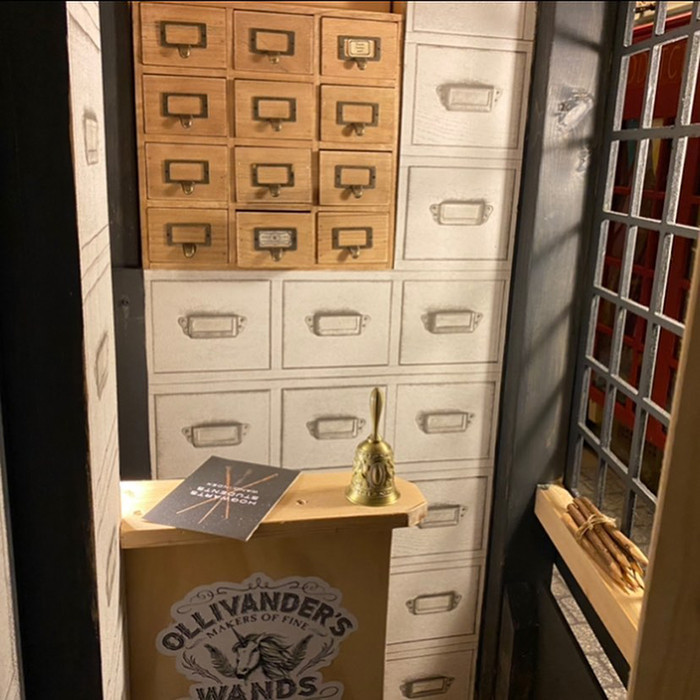 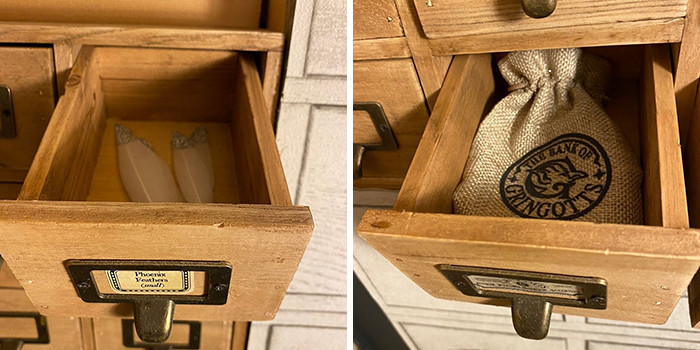 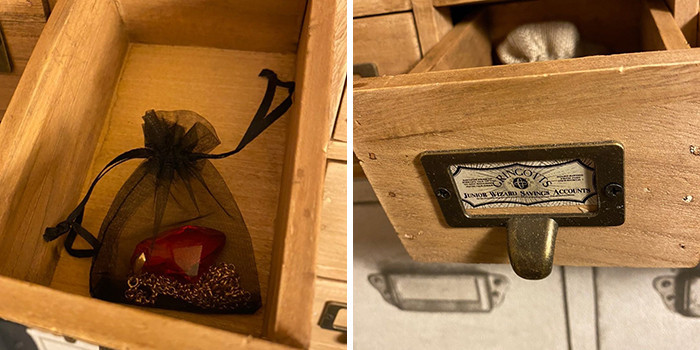 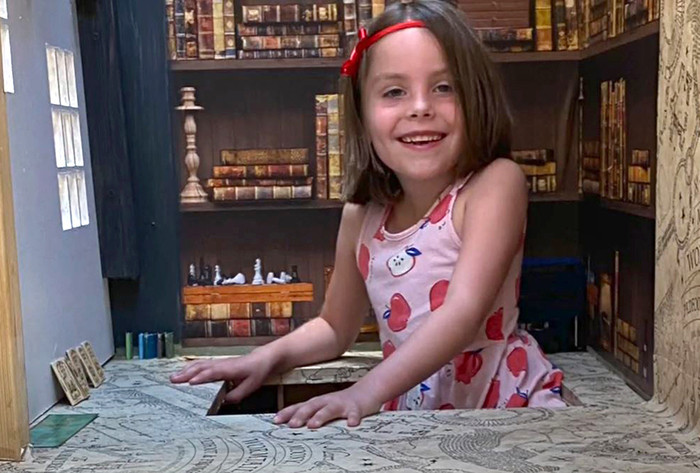 Ella is a big Harry Potter fan, but she has only seen the first movie so far because she’s too young for the others right now. “Her mother and I want her to be able to watch them as she gets older. I’m reading her the book at the moment, she loves it and really looks up to Hermione,” Dylan explained.

Dylan also said that the project was a silly idea to start with, and it was obvious that there would be a lot of work involved. Even though he wasn’t skilled at every job needed to complete it, he was determined to finish it by Ella’s birthday. He hopes this will inspire others.

“If a day is hard, then do something to make the next one better,” he shared his motto. “Thank you to authors like J.K.Rowling and filmmakers, as your stories and films are really helping people at the moment. They certainly have helped us during the first lockdown.”

“I thought maybe people wanting to do a similar thing might want to see, which is why I made a video diary of me making it, but I didn’t expect such a huge and heartwarming response. There are a lot of kind and awesome people out there!” the dad was thrilled with the reactions.

Dylan couldn’t believe how much interest his Harry Potter design got online. He got almost 3.4k upvotes on Imgur, and people are always requesting more photos of this tiny Diagon Alley.

This dad says he’s not done yet and pledged to share more photos soon as he assembles a new shop in Diagon Alley for Christmas.

“I just like building things in my spare time. I did get some help cutting the shop fronts on a big cutting machine, and my mother painted the shop signs.”