US-based artist Alan Gutierrez is an extremely accomplished illustrator, "specializing in science fiction and fantasy cover art." It's not hard to believe, looking at his work, that several of his illustrations over the years have been nominated for multiple awards! He says:

The results are artistically stunning, to say the least. Check them out and let us know which Sailor Zodiac is your favorite.

"This was my favorite of this idea. After this, I returned back to the more portrait style, but I think the series would not have been complete with this important aspect of the Zodiacs." 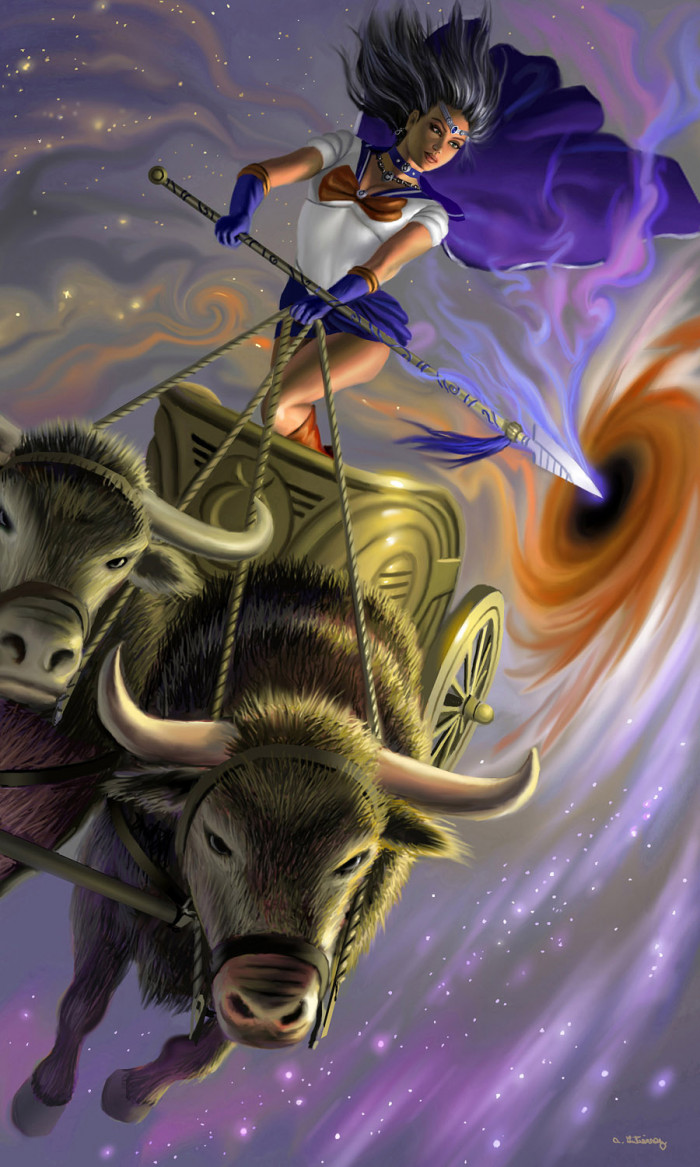 "This is one of my favorites of the series. I got the chance to mix a mythical creature with a pretty Senshi Zodiac, in a water setting, making this a very enjoyable experience!" 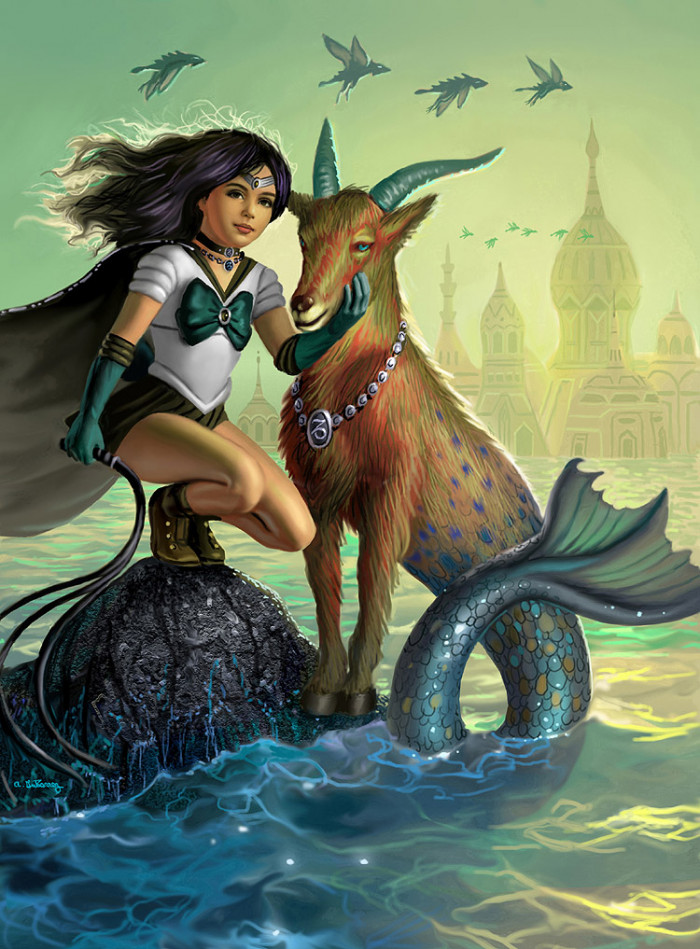 "This features the only male Senshi Zodiac. I added Sailor Bellatrix on my own. The only idea I wanted to convey about her, was that she is a Senshi of a “dark” nature." 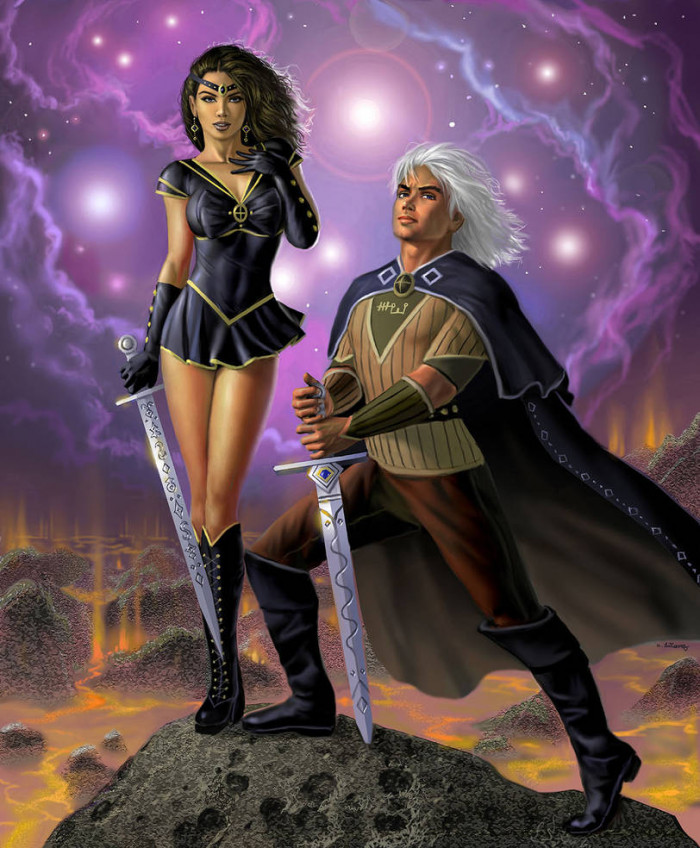 "She's the leader of the Zodiac Senshi, which I associated with great power, like Sailor Saturn. The scene is one of destruction-different from the pastoral scenes of many of the other Zodiacs. Even what she's laying on recalls a Crypt. I also gave her eyes a somewhat dark and mysterious appearance." 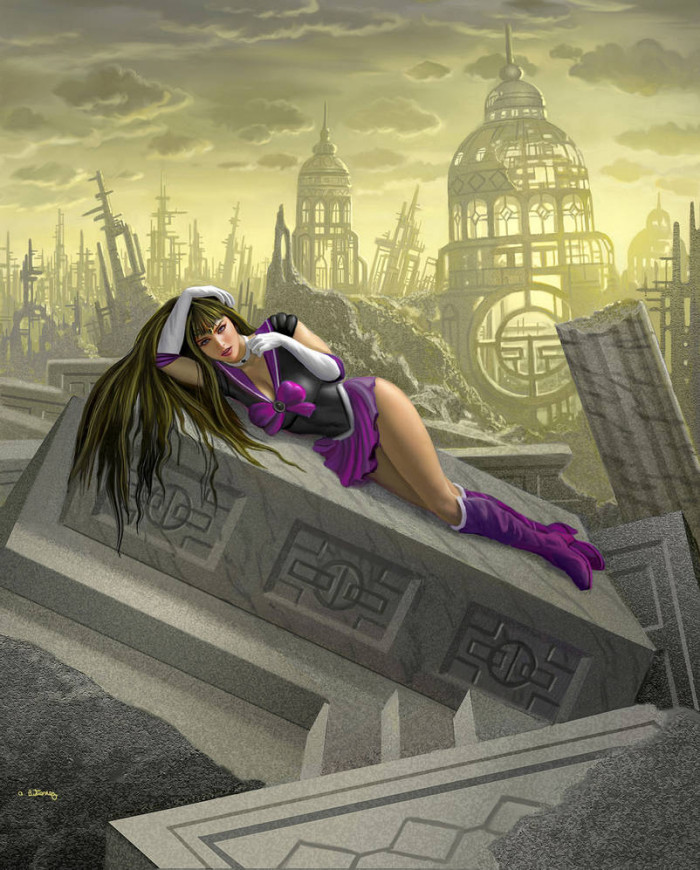 "I made the cape transparent looking, since the idea of an invisible cape was a bit hard to convey." 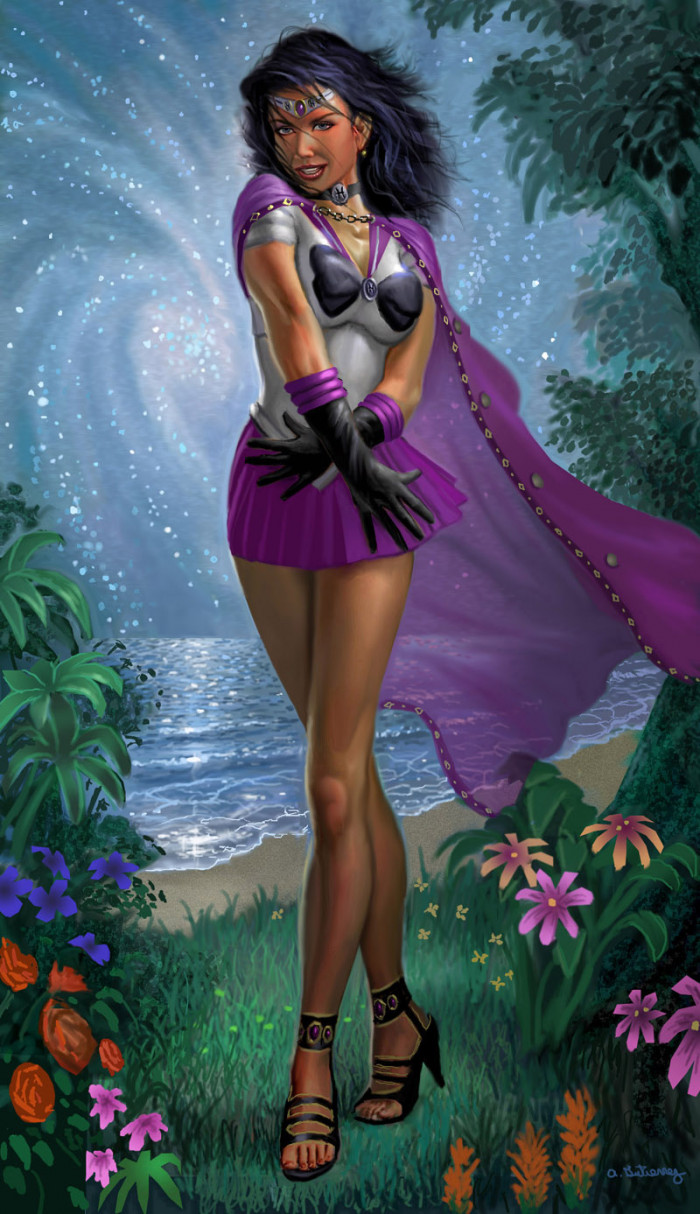 "This is a great example of a purple-green color system I learned, studying Goethe‘s color theory, at the Art Center College of Design. It’s one of my favorite of the series." 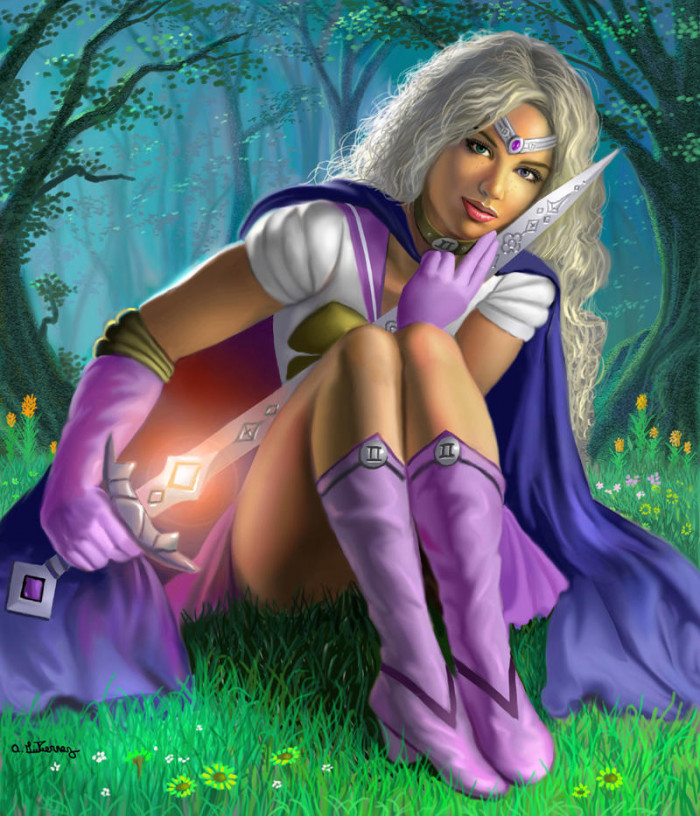 "The first of several animals I wanted to incorporate in the series." 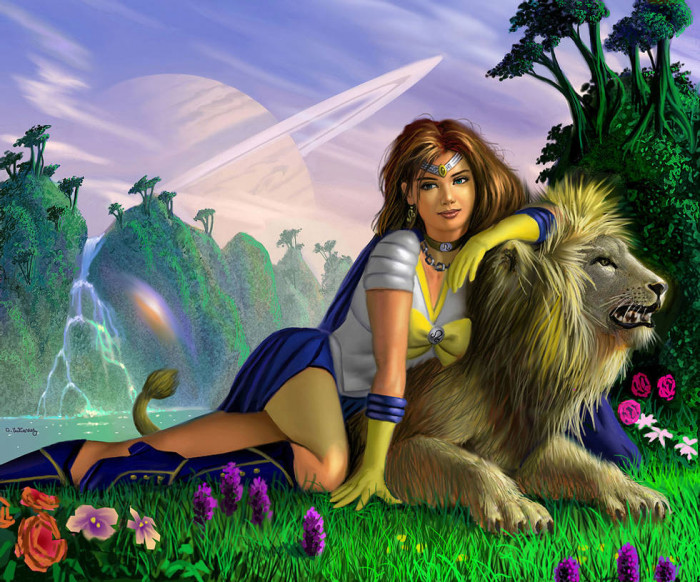 "Europa rides across the heavens upon Zeus, transformed into a white bull, and wielding her Javelin-a gift from Zeus, and used as a weapon for her attacks." 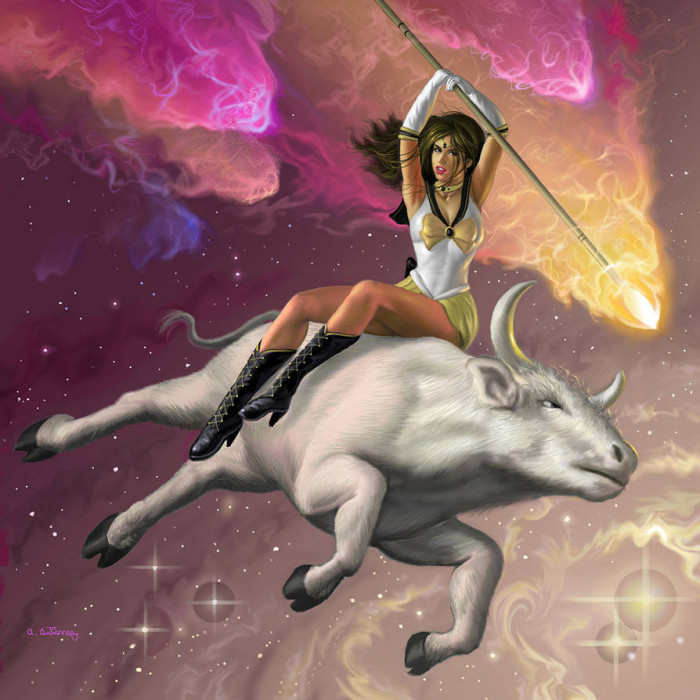 "The idea behind this, was a “historical“ Senshi past, using an ancient stature of a previous Sailor Libra. It was very hard to find a suitable reference for the Boa, a weapon originating in Africa, I believe." 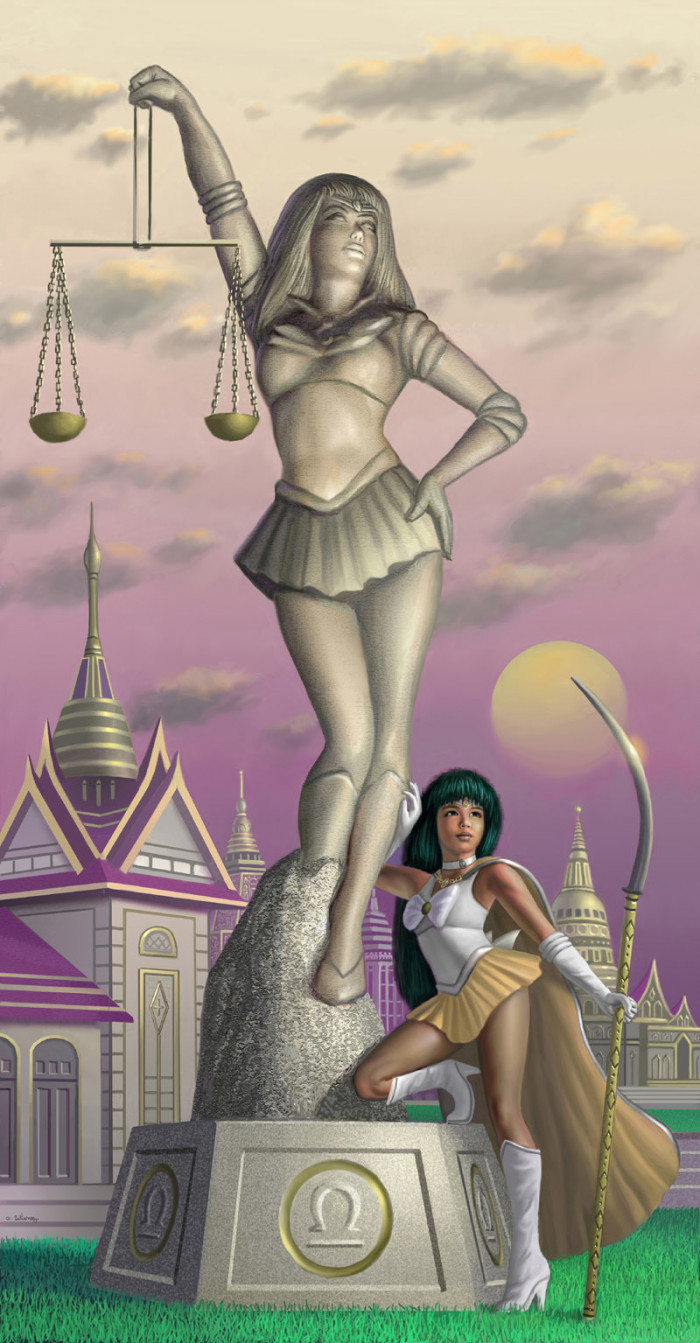 "This was voted the most popular of the Senshi Zodiacs, in a poll on my website." 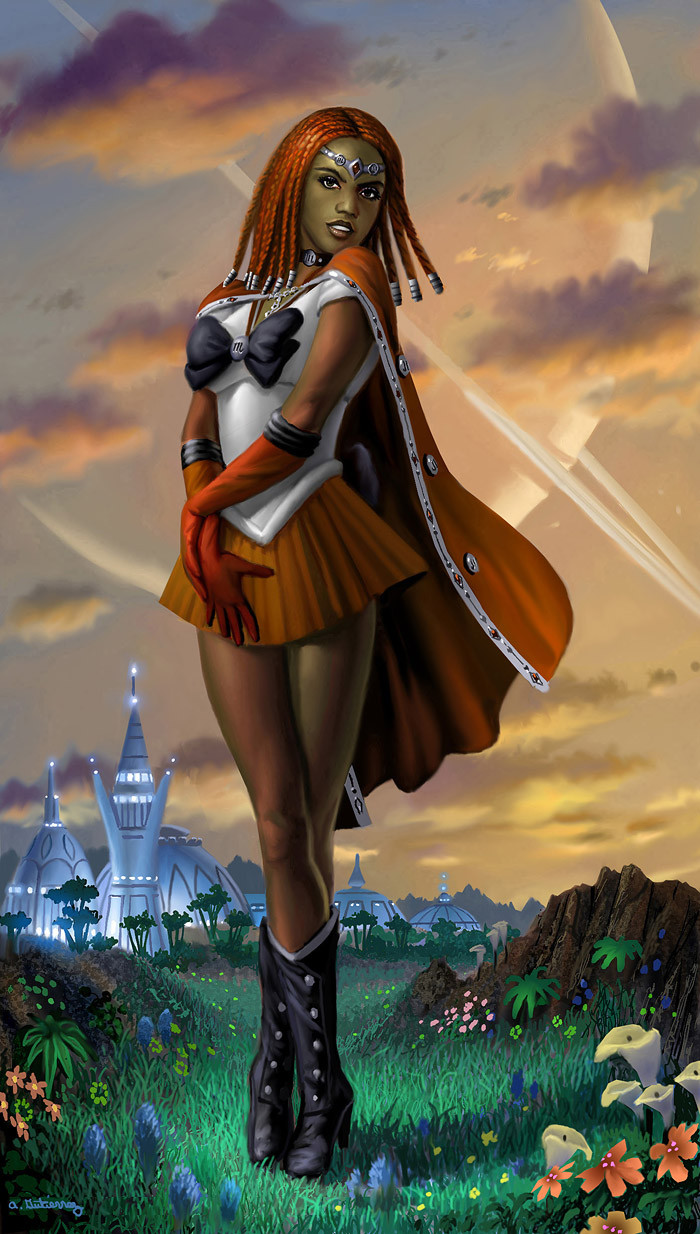 "When I did the original Sailor Gemini during the Zodiac Senshi series 11 years ago, I wanted this idea, of a twin, or mirror image, which would be left somewhat vague to the viewer." 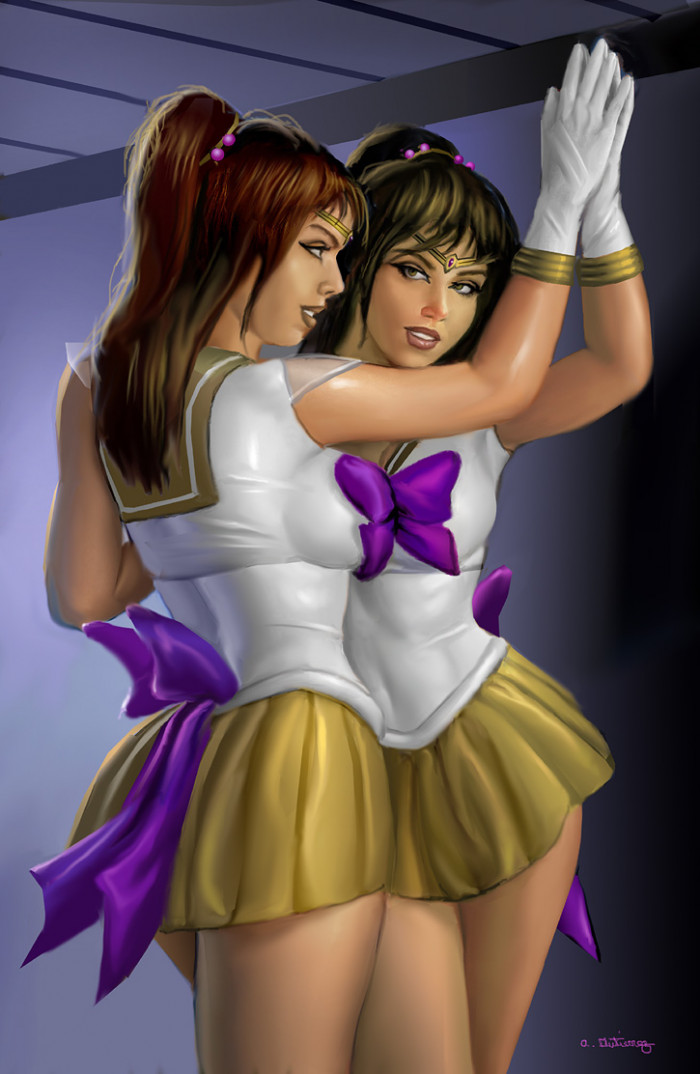 12. Sailor Phobos (Phobos is the innermost and larger of the two natural satellites of Mars)

"Phobos is on her home moon, with Mars, and Denimos (Mars' other moon) in the background. Mars would appear much larger in reality." 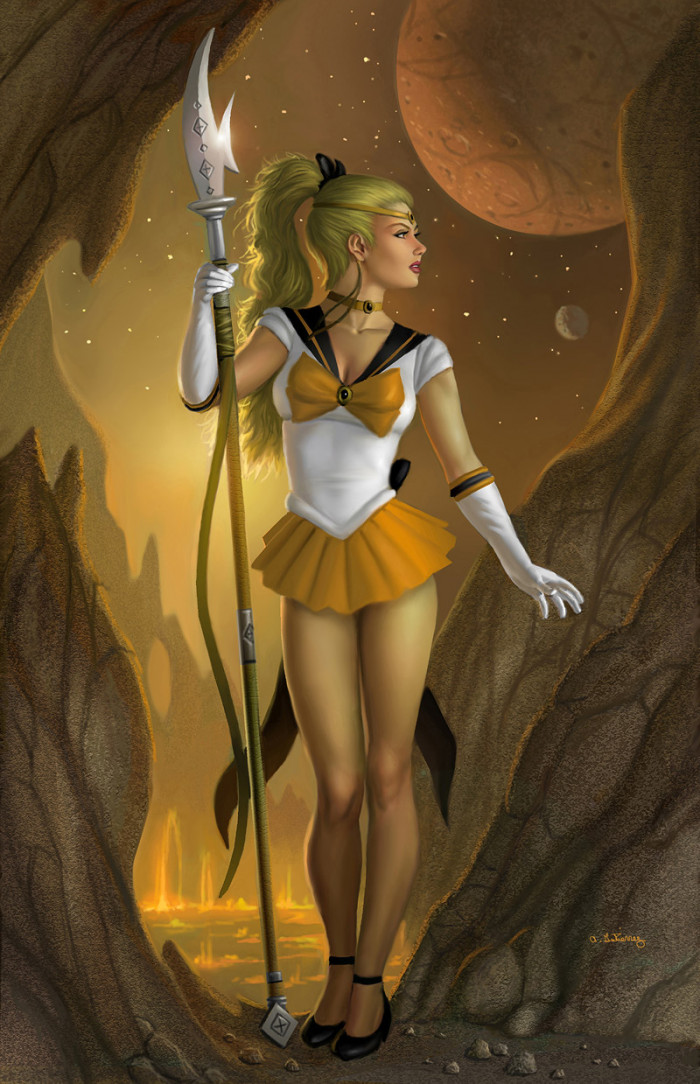 "This was a very rewarding piece for me, especially seen large. I thought the attack effect was nice, using some distortion filters." 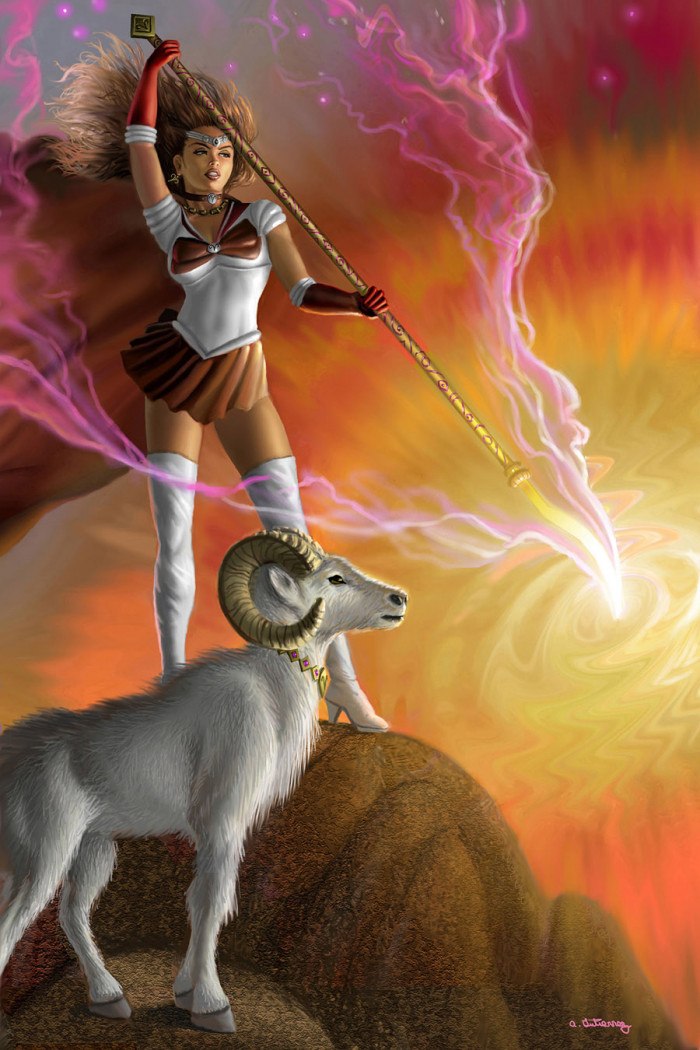 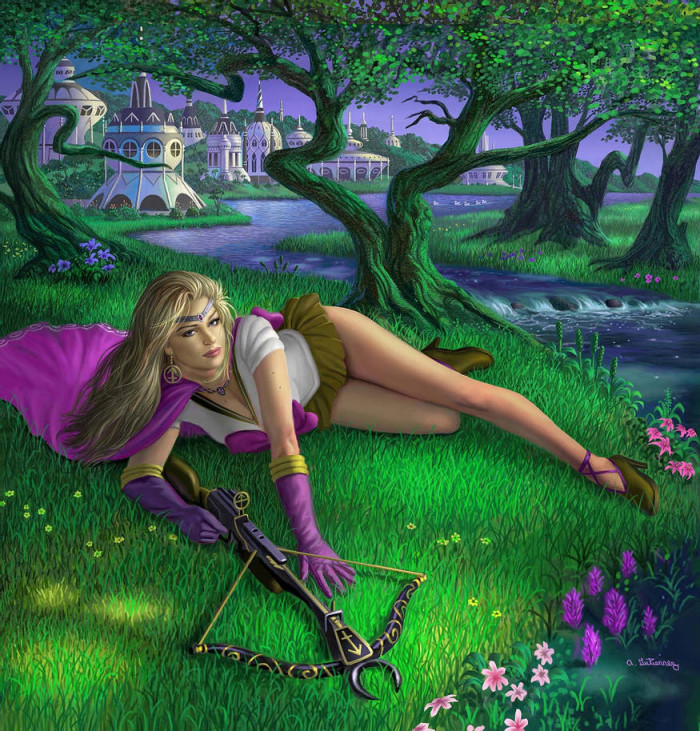 "She, like Sailor Nereid, draws her power from the ocean-by calling upon King Triton's own life-force, shaped in his image from the sea itself, then amplified through the trident." 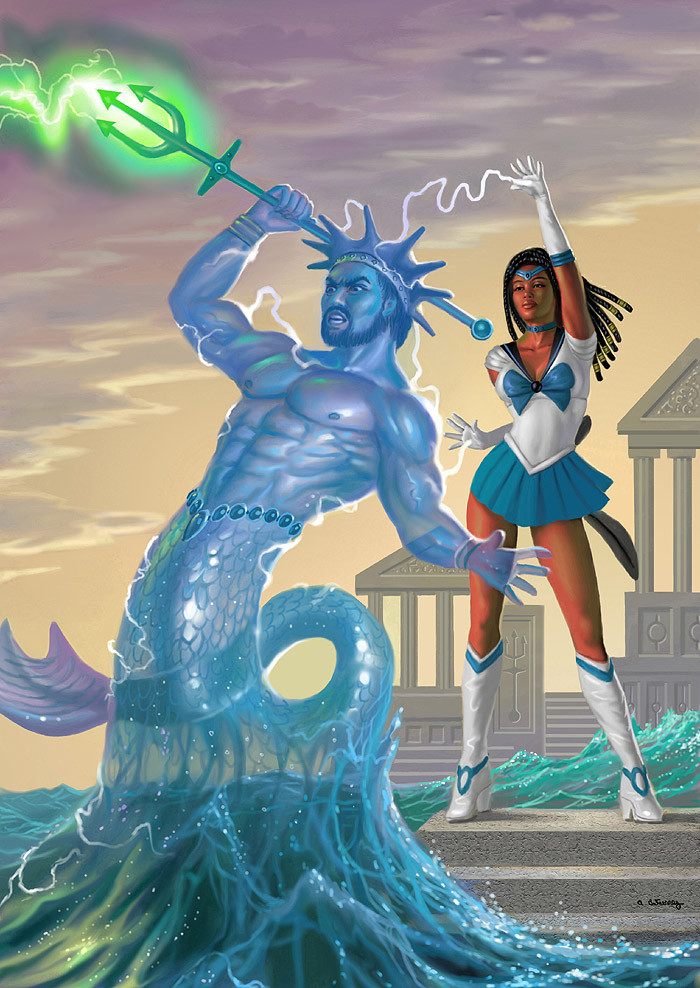 "An attempt at a more “sexy” Senshi, and, a windswept, prairie style setting." 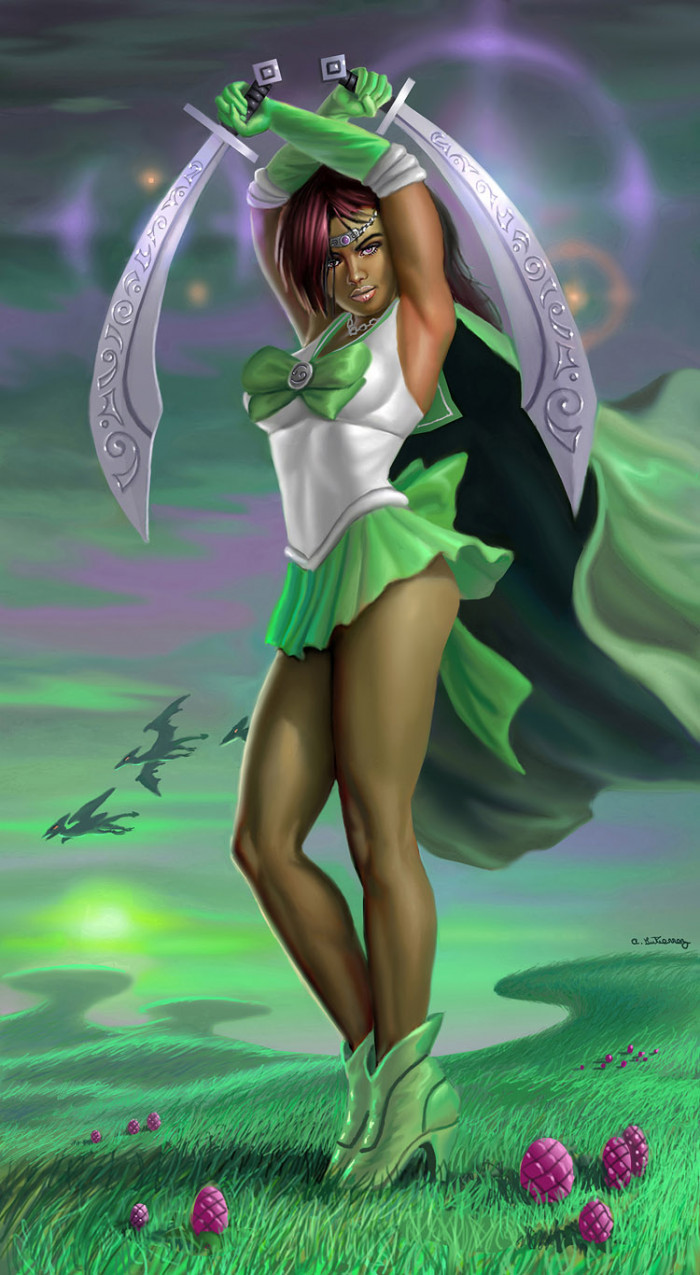 "This started out as a 'star-gate' painting, but, not able to get the desired effect, I decided on Mesoamerican motifs as the main background theme. Hyperion, in Greek is "Watcher from above", so, I used the Sun image, so much a part of Mesoamerican culture." 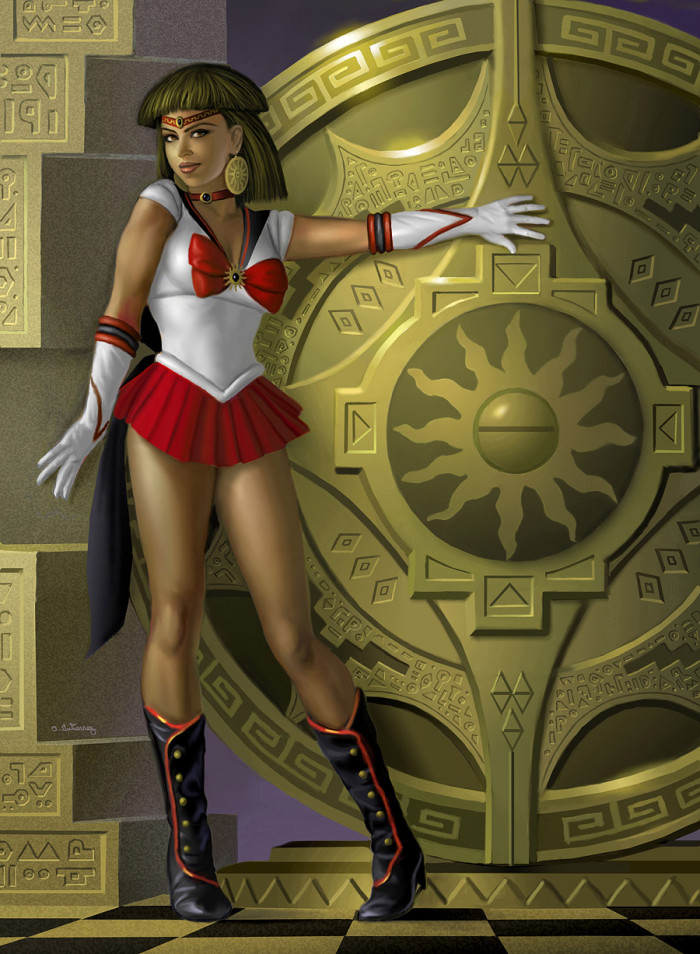 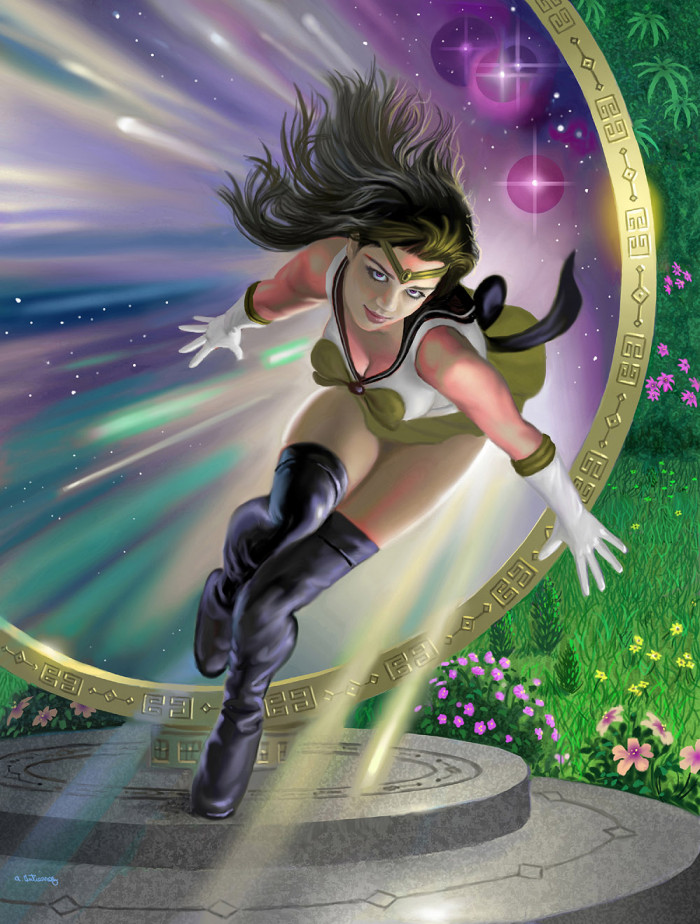 "...Sailor Virgo, passing through the star-gate, the method of travel between the worlds of the galaxy." 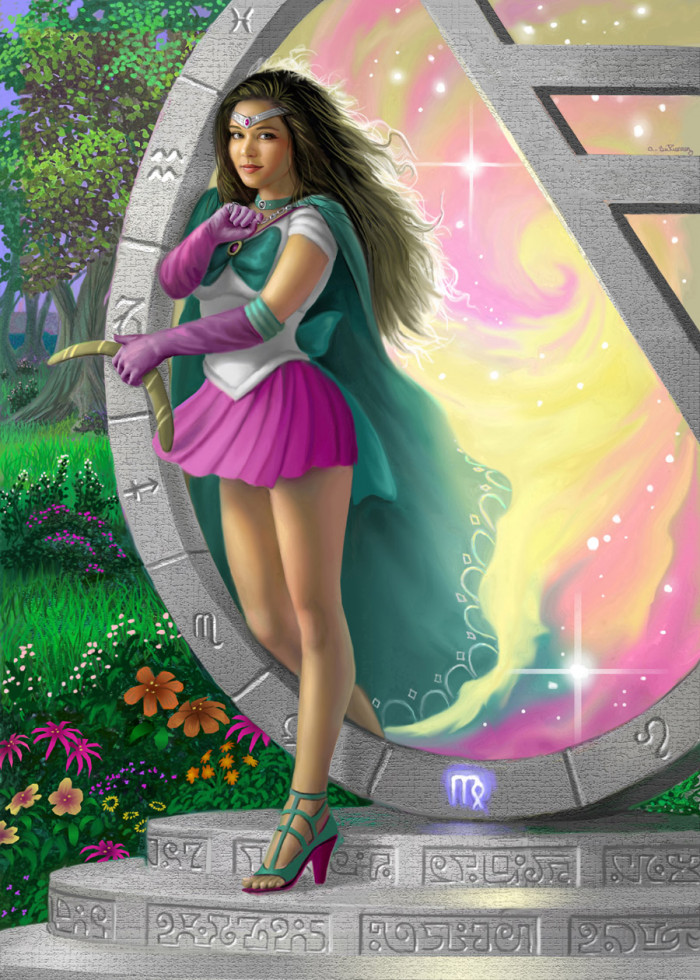 20. Sailor Andromeda (In Greek mythology, Andromeda is the daughter of the king of Aethiopia, Cepheus, and his wife, Cassiopeia.) 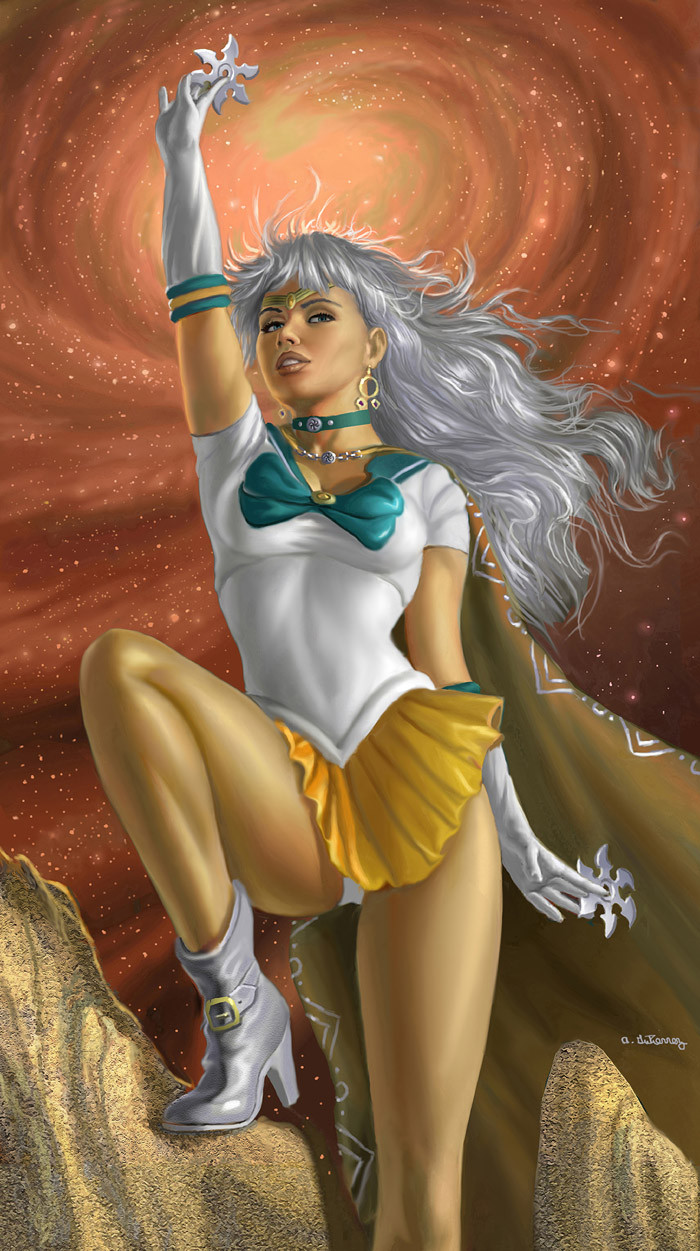 "I had this one planned out even before "Senshi of the Galaxies" was finished. This is another "Senshi in Motion" painting, and gives an idea of what Senshi are capable of...She draws her power from the ocean, and the stars. Nereid is the daughter of sea god Nereus, in mythology, so water had to be in this piece." 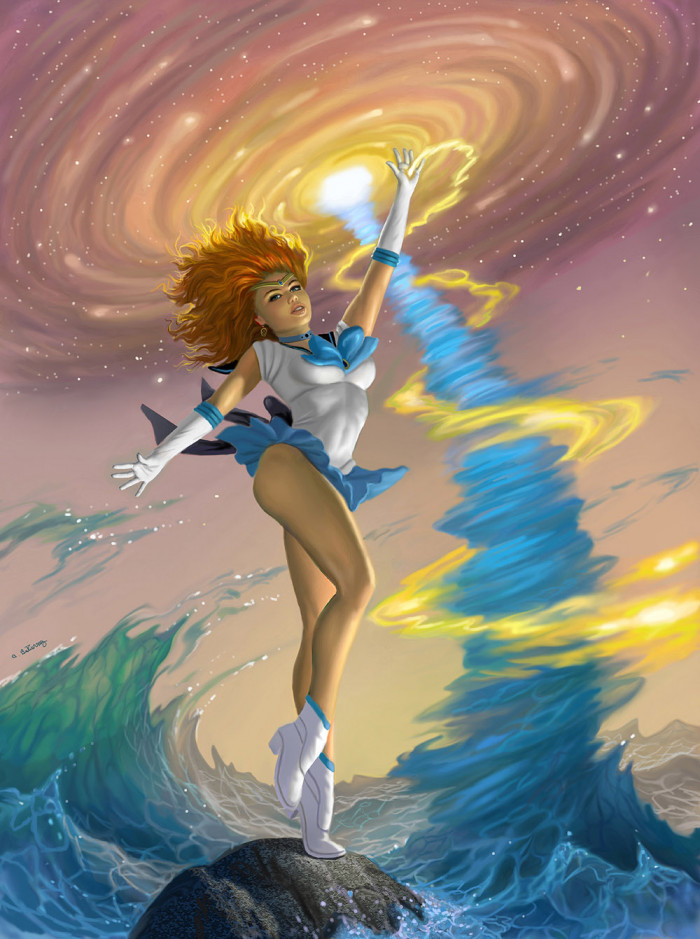 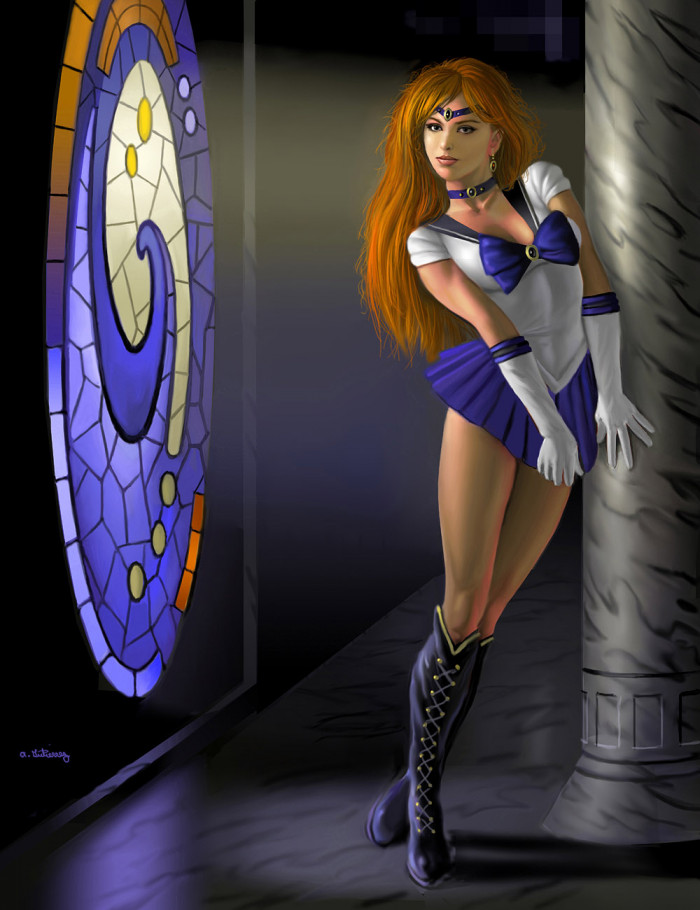 "Since everything connected with Titan suggests size and strength, I made Sailor Titan the strongest of the Senshi Zodiacs. She draws her power from the molten magma cores of planets. In this way, she can lift anything." 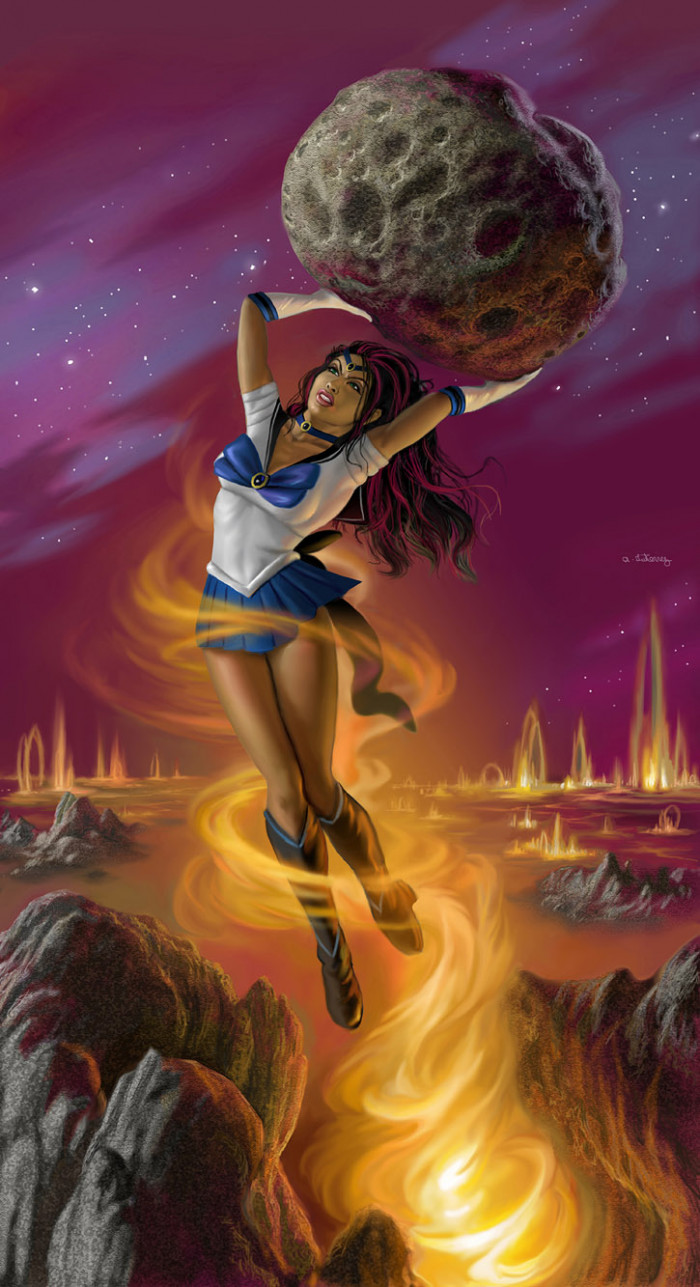 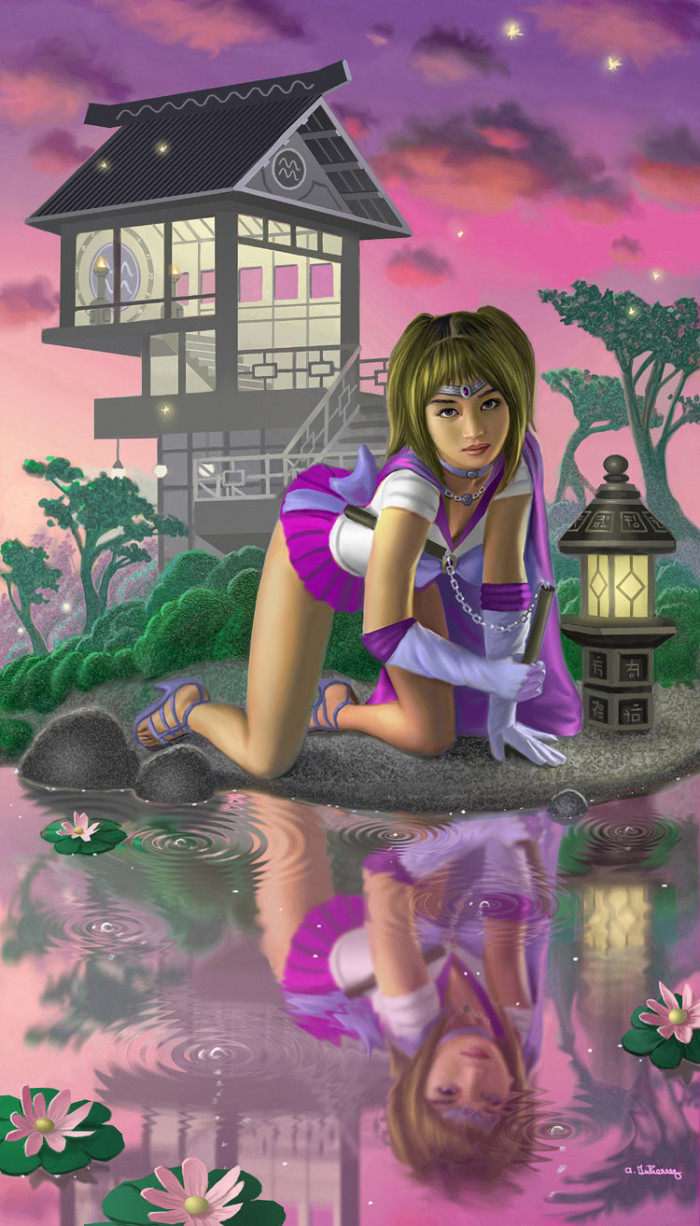 26. Sailor Io (Io has 400 active volcanoes and is touted to be the innermost moon of the gaseous-giant planet Jupiter.)

"Sailor Io is the only Zodiac that does not use the Star-gate. She has the ability to teleport, and, can go anywhere in the galaxy." 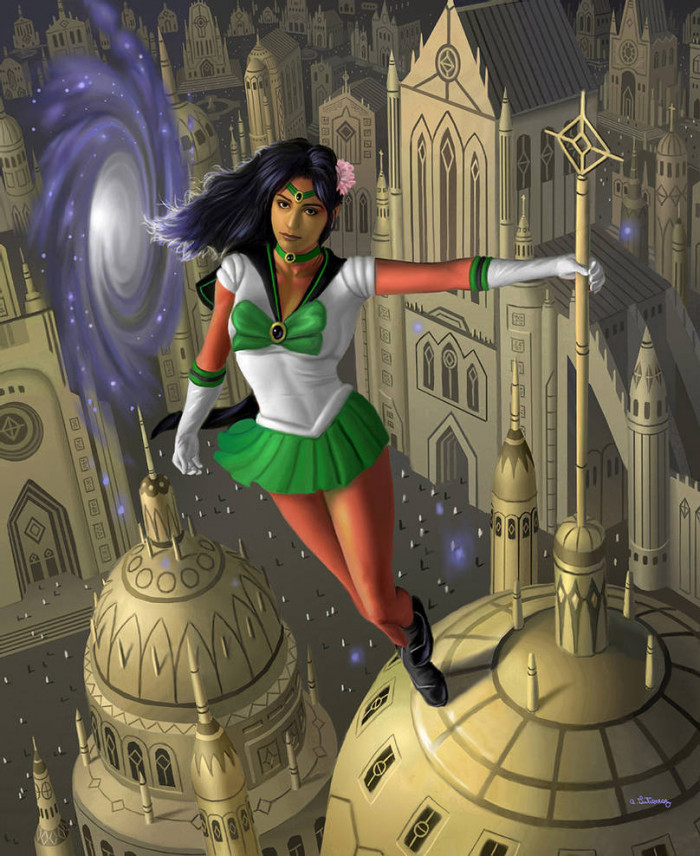