This rare encounter happened one day in the Democratic Republic of Congo. BBC Reporter, Gordon Buchanan, and his team witnessed the amazing moment.

Buchanan is a renowned Scottish filmmaker who travels the world to create nature documentaries. He and his team were in the Kahuzi-Biega National Park when they happened upon a male silverback gorilla.

The gorilla was hiding behind thick bushes and was waiting for a safe time to cross the busy dirt road ahead of him. If the adult male was alone, he would have crossed the road easily without worrying as much.

This time the gorilla was waiting for a less busy time to cross the road because his whole family was with him, including the young gorillas. He has to be very careful leading them to the road because one mistake can result in a catastrophic accident for his family.

Buchanan and his team warned the oncoming truck that a troop of gorillas is about to cross. When the adult silverback noticed that the road was quieter, he moved to the middle of the road.

He stayed there, standing confidently until the last member of his family has safely crossed the road. Satisfied that all of them crossed to the other side, the dominant male gorilla walked around as if to double-check.

Seeing that no one was left behind, the proud gorilla followed his family's tracks. The protectiveness displayed by the gorilla is a sight Buchanan and his team won't easily forget.

Look at how massive the silverback gorilla is

Experts estimate that there are less than 900 gorillas living in the wild. They can only be found in Rwanda, Uganda, and the Democratic Republic of Congo.

The gorilla population suffered a lot in the past decades because of illegal poaching, human encroachment, and human civil conflict. Since then, volunteers, governments, and non-profit organizations have been working tirelessly to promote their conservation.

Although the fight to prevent the extinction of mountain gorillas is a continuing uphill battle, hope is not lost. Recent reports have shown that the gorilla population is steadily growing in the past few years. 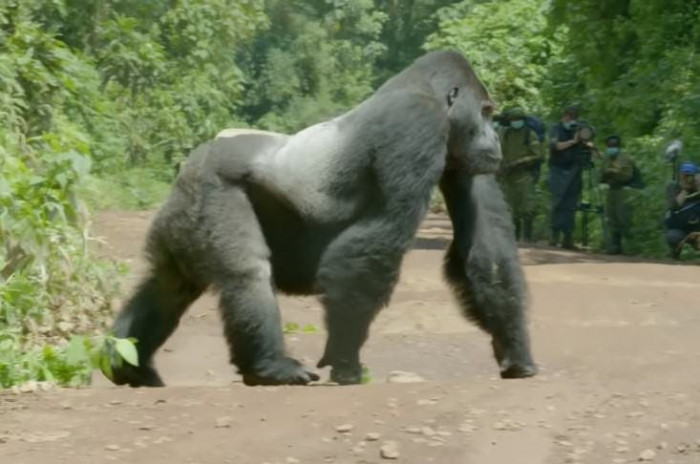 Here's the adult silverback gorilla in charge of protecting his family.

He's looking around the area to check for any other potential threats. He's aware of every sound and movement in his vicinity.

When a silverback gorilla is threatened he will stand on his hind legs, beat his chest, growl aggressively and charge at the threat. Normally, gorillas are gentle and even considered shy. 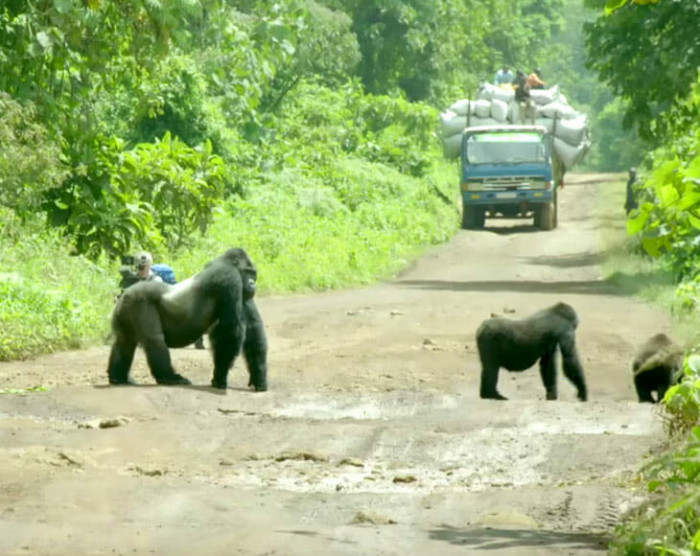 The adult male gorilla seems to be staring down the oncoming truck.

His absolute confidence that he can protect his troop is evident in the way he stays still as his whole family crosses the road. He didn't move an inch until everyone was across the road safely.

Humans may have breached his mountain and his home but he knows this is still his territory. Not even a truck would dare cross this gorilla's path. 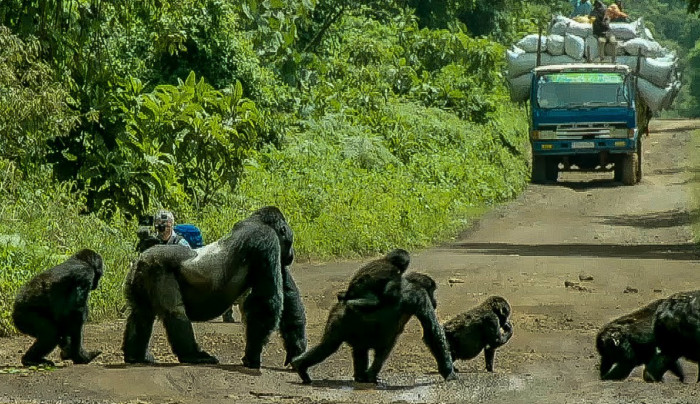 You can watch the full footage captured by the BBC crew here:

It's amazing to see that silverback gorillas, just like humans, value familial relationships. It's crucial to their survival that they look out for each other.

It's promising to know that despite human interference, silverback gorillas are still able to thrive. The dedicated efforts of organizations and governments in preserving the gorilla population are admirable.