Presenting any topic in front of the whole class is an absolute nightmare, it only takes a couple of minutes but it always feels like a lifetime. Any random distraction manages to drive fear and uneasiness into your heart and that's when you start doubting yourself entirely and screw everything up.

However, public speaking is an essential skill that most people must master in order to have a successful professional career, but sometimes a couple of factors make the process so much harder and almost impossible. Anxiety is one of the major factors that most people struggle with, it's a huge issue that can easily get out of hand.

A Twitter user recently tweeted about how teachers should exempt students who suffer from anxiety from presenting in front of the whole class, and not everyone agreed with his proposal.

People with anxiety often have a hard time presenting in front if their whole class. 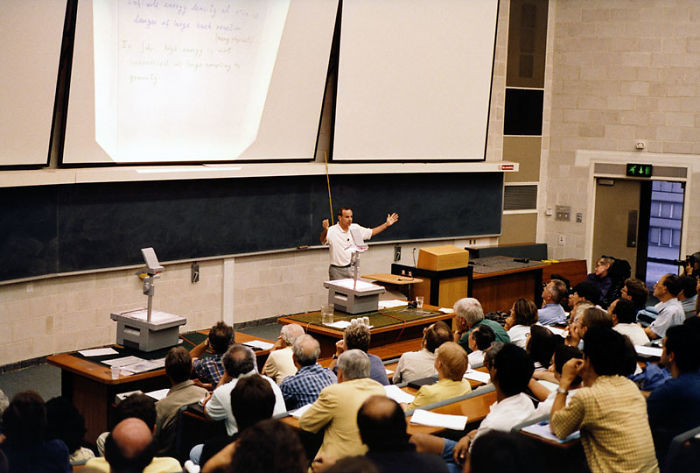 Twitter user @bluexmasgcv or Jordan recently brought up a very important point in one of his rants, he explained in his Tweets that people who suffer from anxiety should be spared from presenting in front of the whole class. Jordan explained that he was lucky to have an understanding teacher who allowed him to present privately which allowed him to be more comfortable and reduced the amount of stress substantially.

This whole rant raised a very important question: Should schools provide more options for their students who suffer from anxiety or is the current way of doing things better? 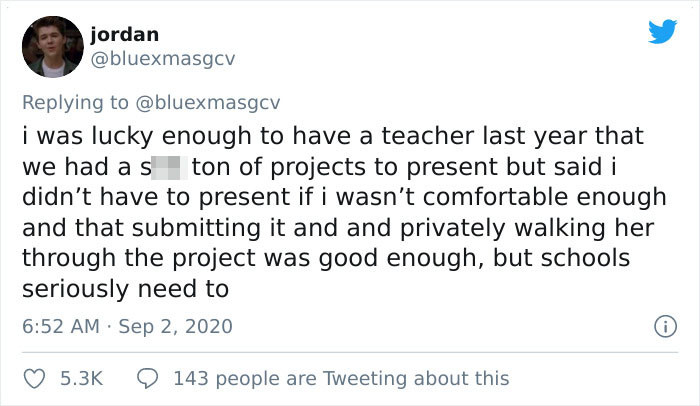 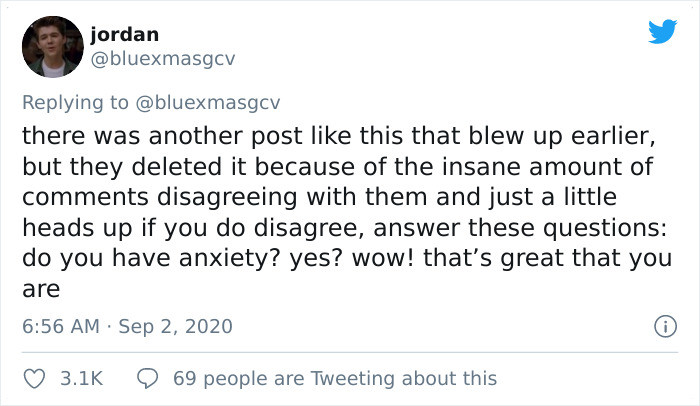 Putting yourself in the shoes of someone who's suffering from an anxiety disorder is quite hard, but the feeling can be described nevertheless. Imagine being constantly afraid and constantly living in an unrelenting sense of dread and unease. When you have anxiety you're always convinced that any attempt you do will end up failing and you will have to face the consequences of your failure.

These thoughts will leave you drained almost all the time, it's like spiraling down an endless hole of intrusive thoughts and you start feeling like your life is cursed. This is just a general idea of what it feels like to have anxiety, the experience may vary from one person to the other.

A heated discussion was sparked after Jordan's Tweets: 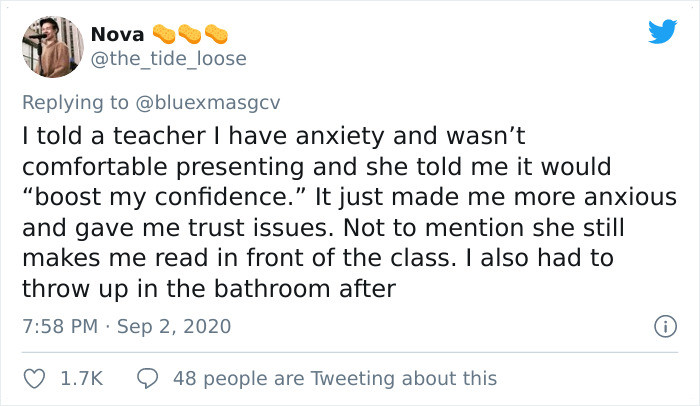 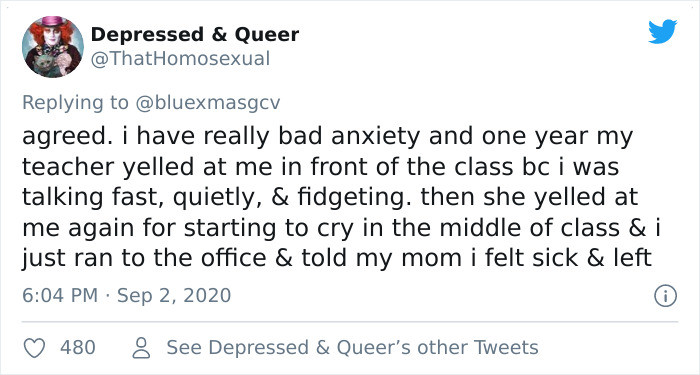 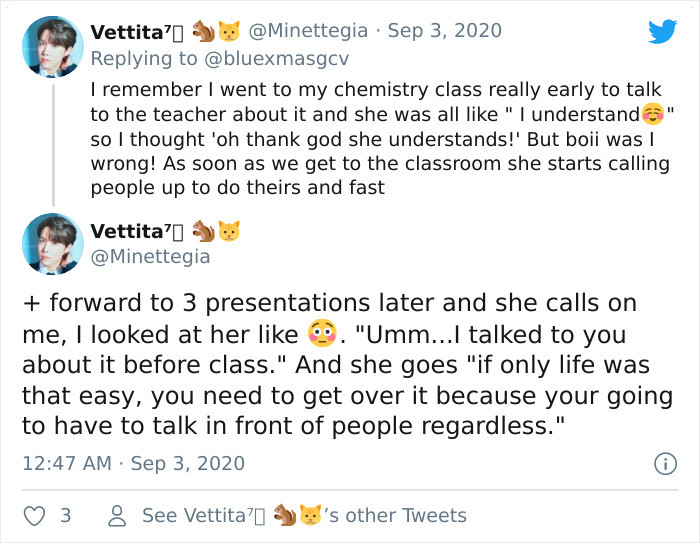 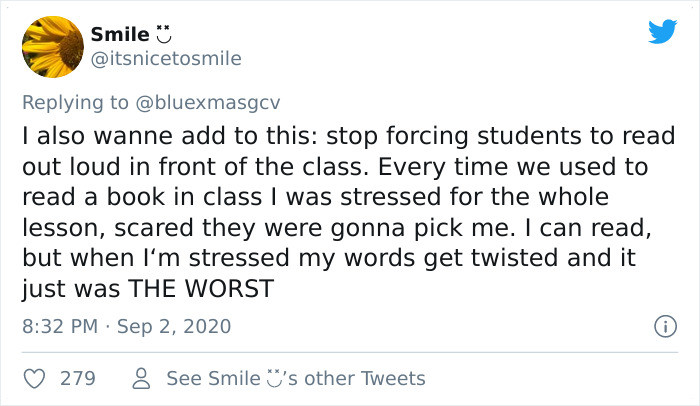 Some people pointed out a very important aspect that the others forgot to mention, some teachers simply don't care about their students' well-being and they can sometimes respond with negative comments, give them a bad grade, or even yell at them for refusing to present. Unfortunately, things like this can only lead to even more anxiety.

Many people disagreed with this and insisted on the fact that public speaking is an invaluable skill that can be reinforced in more positive ways: 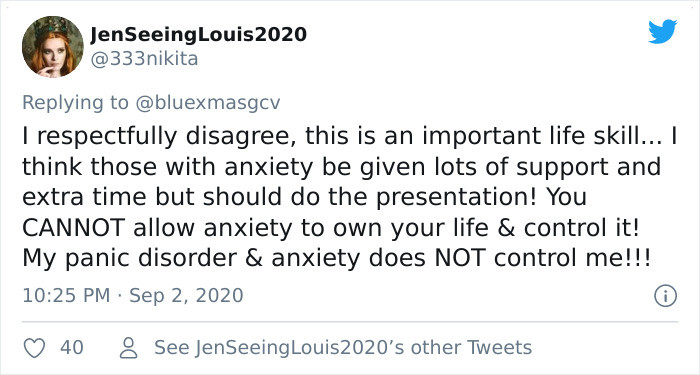 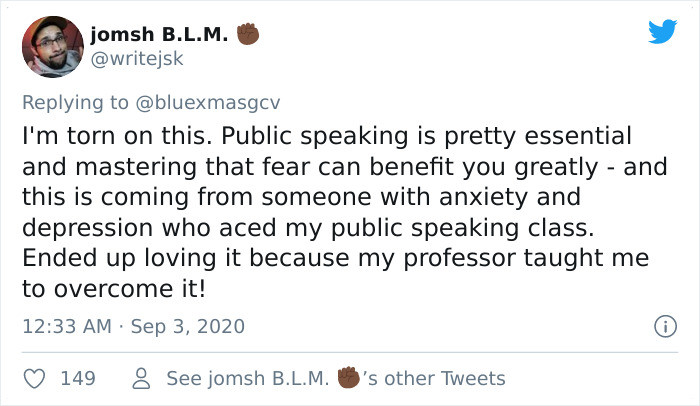 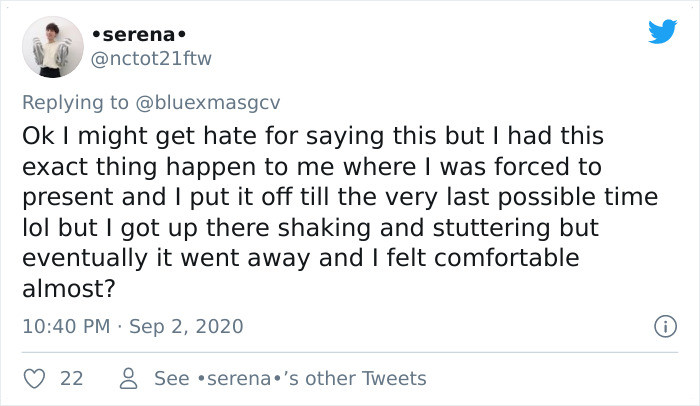 Some even brought up other aspects such as speech impediments and how that might worsen things quite a lot. Speech impediments can cause a lot of stress and public speaking doesn't help at all and may even end up putting someone into a vicious loop that most people can't understand, which will only reinforce the problem further.

This issue is obviously way more complicated and is nowhere near one-sided, there are quite a lot of nuances and factors involved which means that each individual case needs their own solution to the problem. 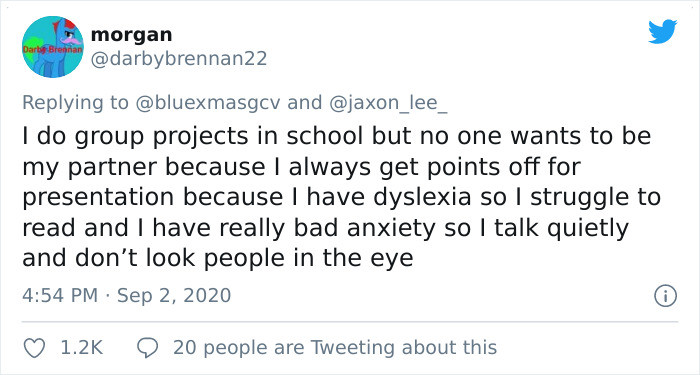 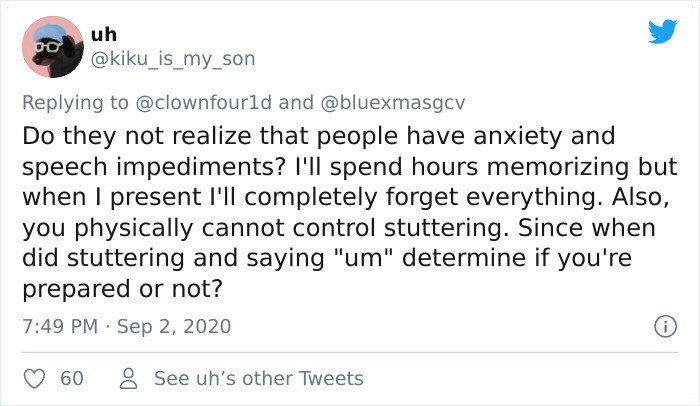 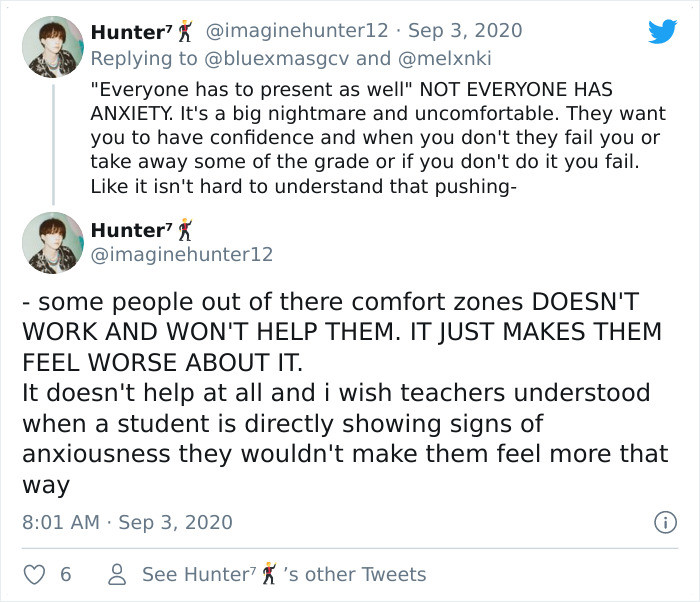 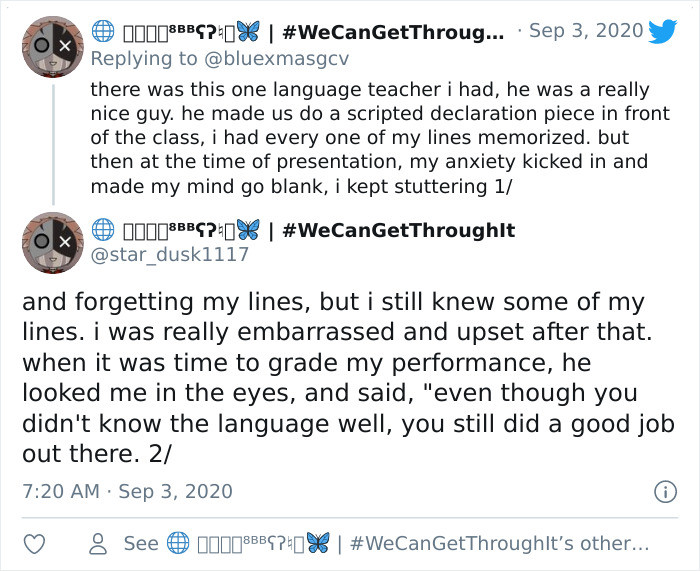 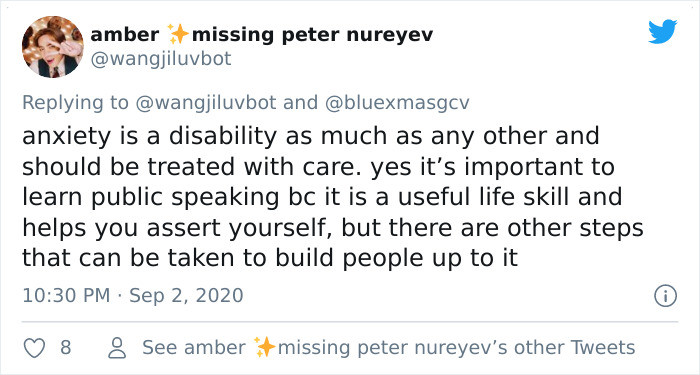 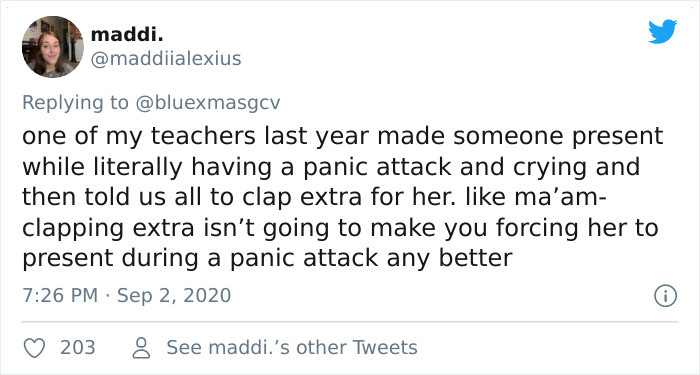 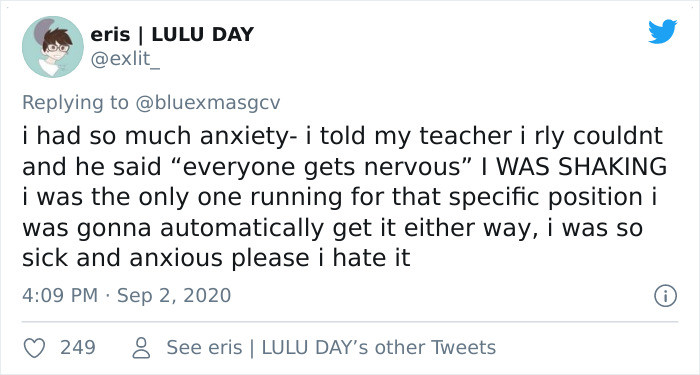 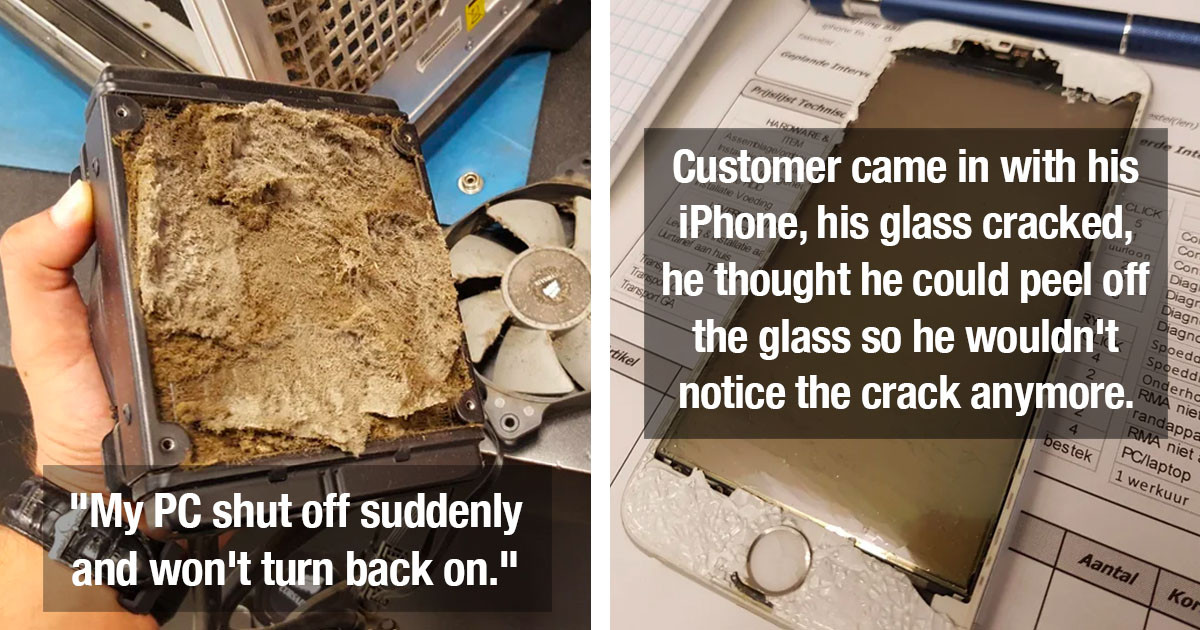