Depression is one of the sneakiest illnesses. You can’t see it coming; it affects every aspect of your life and can result in physical illness. People can even take their own lives.

But it doesn’t get much attention, probably because depression is not an obvious mental illness; people are often ashamed of it and think it is a sign of their weakness. Emily,19, is a mental health activist, and she recently shared a post about lesser-known symptoms of depression.

She wanted to raise awareness and reach out to people who need help. Everyone should read it because maybe we have a person near us that needs help, but we have no idea. 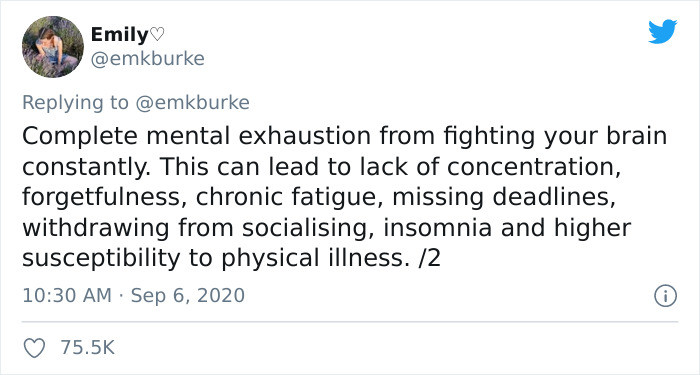 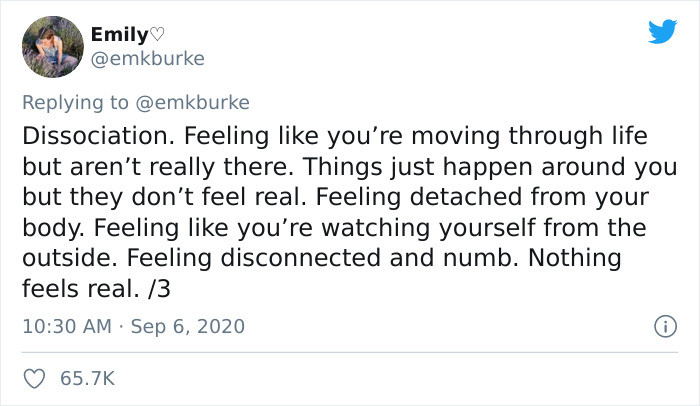 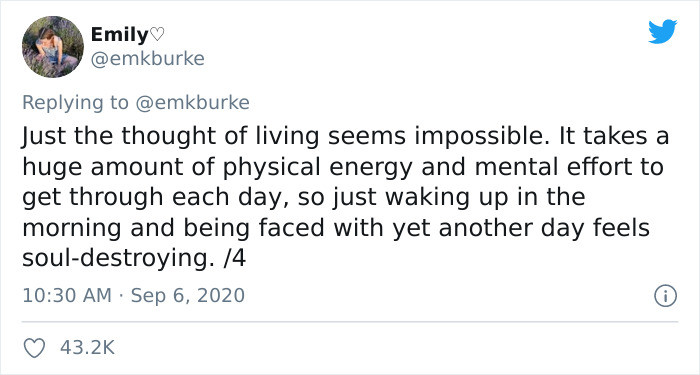 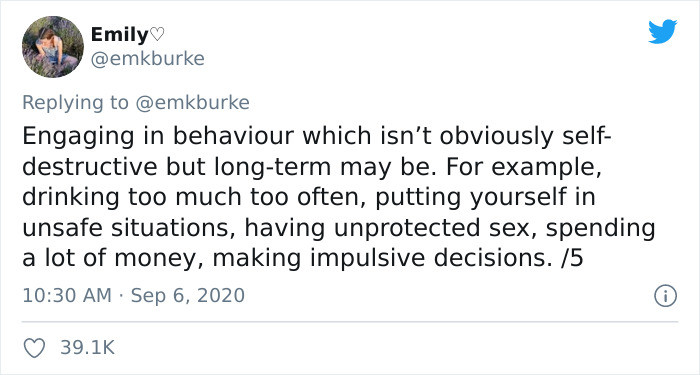 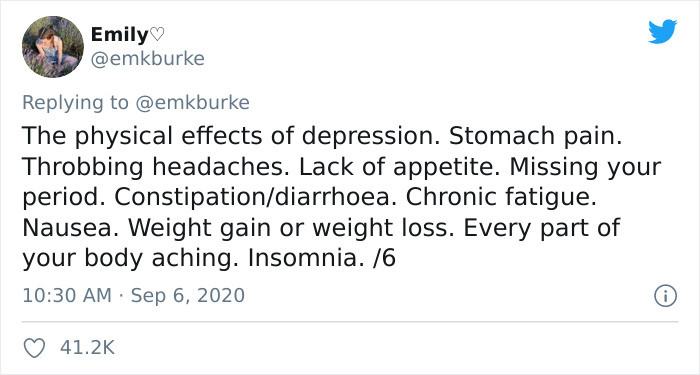 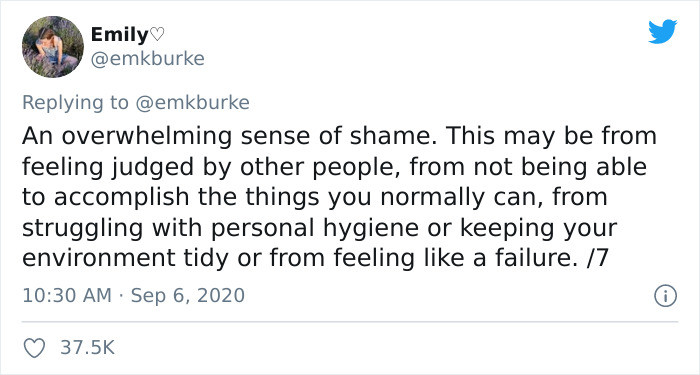 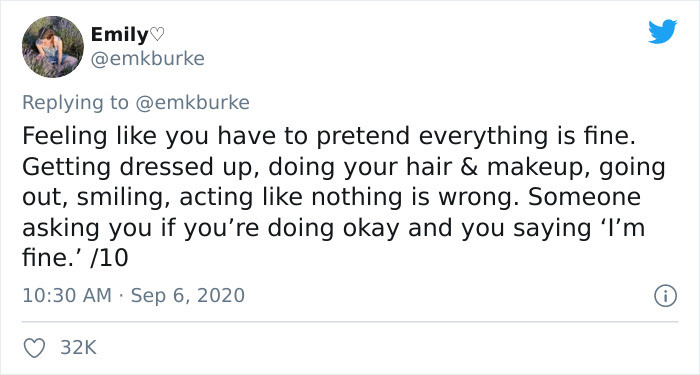 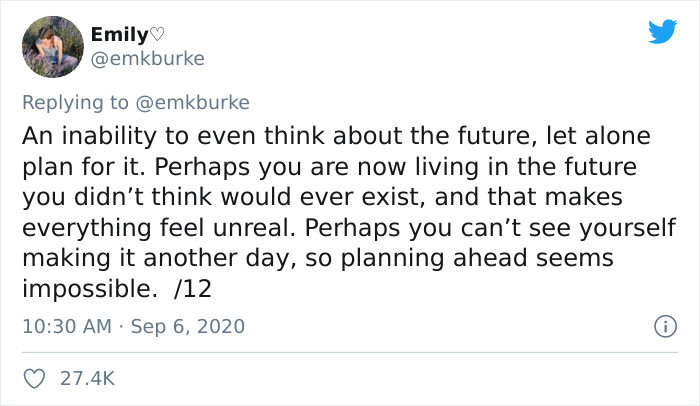 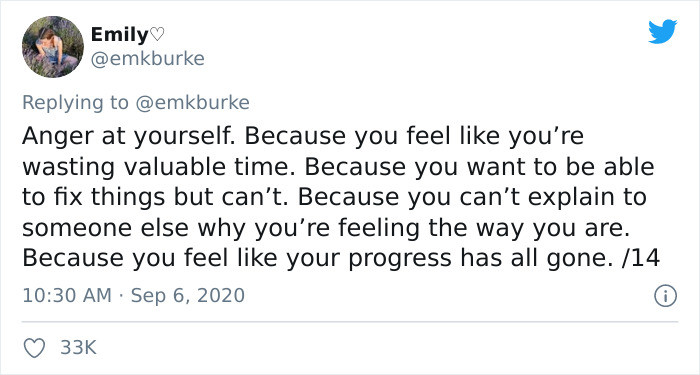 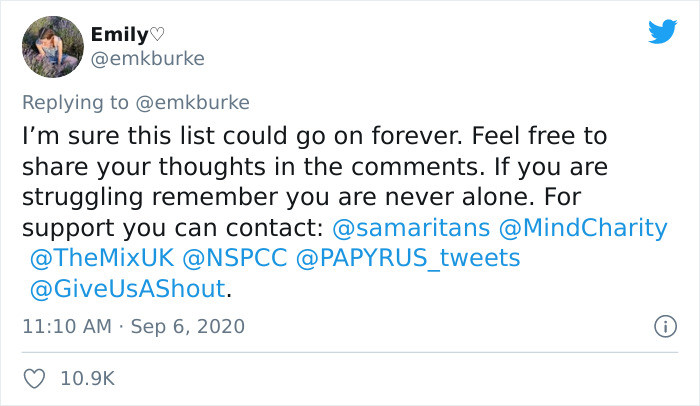 Emily say she never planned to publicly speak about depression. “One day I just started tweeting about my experiences. I had a lot of things inside of me that I wanted to say. Or maybe even I needed to say, to start to process the things which had happened to me.

The more I found that others related to the things I posted and the more I became a part of a sort of community on Twitter, the more fire I had within me to speak out even more, and even louder,” she says.

“The power of social media is really quite something. I can connect with people all over the world, with different experiences, upbringings, and cultures. I learn so much every single day. I also find a lot of comfort from finding others who have experienced similar to me. It reminds me that I’m not alone.”

Her mental health journey had its challenges “My panic attacks started when I was 13, shortly after my grandfather passed away and I went on a school trip to Belgium to look at the war memorials. This trip really triggered something in me,” Emily remembers. From that point on, her panic attacks and anxiety practically ruled her life.

“I was terrified to go anywhere. I didn’t want to leave the house. I started self-harming. Then I developed OCD, I believe as a way to try to get more control over my anxiety. Soon though, this got out of my control too.

I slipped into depression and attempted suicide for the first time when I was 16. I was admitted to an adolescent psychiatric unit for 3 months and this was the start of two years in and out of the hospital for self-harm and suicide.

Thankfully, I am no longer in that dark place. I am healing every day. I am carving out a purpose for myself and living in the future which I never thought would exist.”

“I am autistic, and I hate it when I am told to not let this define me. Being autistic shapes every part of me. It defines how I see the world. It defines my intense passions and interests. It’s not a bad thing that this defines me,” Emily stated.

“However, my mental health diagnoses I suppose don’t define me in that there is more to me than my mental illnesses. I love horse riding. I love to read and write. I love spending time with my friends and family.

My day is no longer defined by my mental illnesses like how they once consumed every waking thought. This took a great deal of time though, and therapy. It didn’t happen overnight.”

Depression is widespread. According to the WHO, it affects more than 264 million globally. “Depression is different from usual mood fluctuations and short-lived emotional responses to challenges in everyday life.”

“Especially when long-lasting and with moderate or severe intensity, depression may become a serious health condition. It can cause the affected person to suffer greatly and function poorly at work, at school, and in the family. At its worst, depression can lead to suicide.”

Almost 800,000 people commit suicide every year, and it is the second leading cause of death in age between 15 and 29. 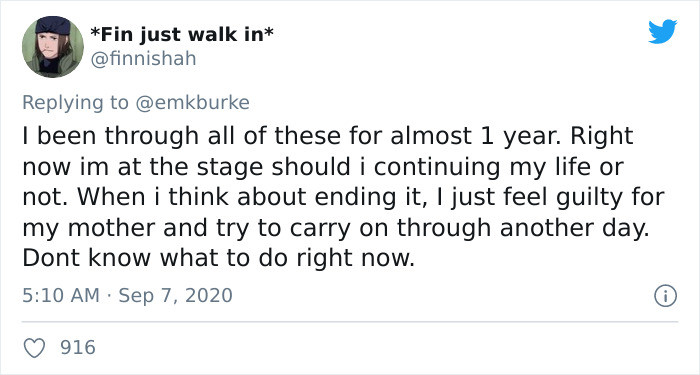 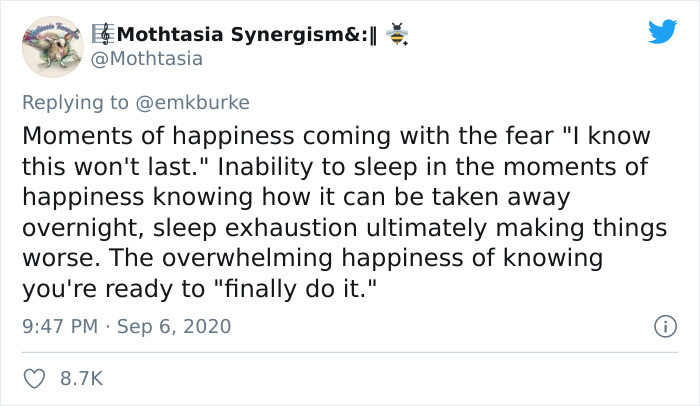