Let's start this off by saying that what you're about to see below should NOT need to be news, however right now it is, and it is very, VERY important.

Because this conversation could have gone a complete other direction than what it did. The conversation below held between Tiffany Monroe, from Texas, and a man she was chatting you is the prime example of a positive experience that transgender people, like Tiffany, are often deprived of. Because what a lot of people don't understand and that for transgender people, telling someone about their past can be frightening because you never know how someone might react. You not only face rejection from your potential romantic partner, but also the possibility of verbal abuse, public attempts at "shaming" and more trouble than it's really worth.

That's exactly why this short text conversation is the breath of fresh air that everyone needs to see and plenty of people can learn from.

Here is the text that has earned internet fame. Simple, right? Wrong.

This was an easy text for a man to send, but no one could have dreamed that his words would essentially go viral, with people from all over the place praising him for his open-mindedness and honesty.

As many people pointed out this simple message should not warrant any kind of praise, but as this kind of open acceptance and human decency appears to be so rare these days this guys really has come as a breath of fresh air, and he deserves it.

I told this guy I was trans and look at his response pic.twitter.com/wqPzIqJEzr 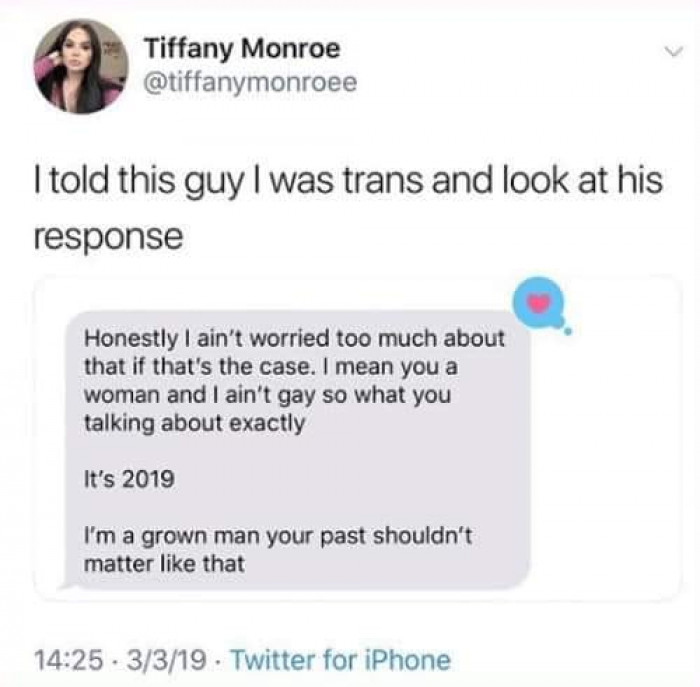 Many people told Tiffany she should marry the man, but so far it is unknown if they are going to be seeing each other

Whether it works out for them both or not, the thread that their interaction created has been a great opportunity for people to enjoy some not-so-common human decency.

Let's see what some of the replies in the thread looked like:

The energy he gave pic.twitter.com/XvwG40eVIf

Girl, you better put a ring on it before somebody else does!

This is what I mean... High five dude, good work.

I don’t want to praise him for the simple fact that we’re praising him for treating someone like a damn human being as he should, but I’m going to praise the absolute fuck outta him because people ain’t shit anymore

Unfortunately it wasn't all happiness and rainbows, but I'm sure we all want to overlook that...

Of course, this is possibly what trans people face on the daily, so that definitely warrants Tiffany's response. Sometimes you've just got to vent your feelings. Nevertheless! This is one small blemish won't ruin the lovely meaning behind the thread.

And all the ugly men quoting this and being transphobic, I hope the girl you fucking with gives you chlamydia. You ugly bitches

And thank you Tiffany! Let's keep our fingers crossed for an update of the couple madly in love, shall we?

Anyway, thank you to all the lovely people being so nice to me, y’all are beautiful, deserve love and I hope you have a good night/day! To everyone being rude & transphobic, suck a fart outta my ass bitches.