Being a subject that has been heatedly debated about over the years, abortion brought out various views and opinions from people around the world. As with any major topic, however, some people will take more extreme measures to state what they believe in than others.

20 year-old college student and Reddit user molesterstall0ne recently told a story about how her Uber driver had left her on the side of the road after hearing that the purpose of her trip was to get an abortion. The full story was submitted to a subreddit, where she sought advice on taking legal action against the driver who stranded her.

A strong opinion based solely on your personal experiences doesn't give you the right to strand someone in the middle of nowhere.

Seeing as her story was shared on r/legaladvice, responses on what kind of action she should take started coming in.

Comment from discussion My Uber driver left me on the side of the road because he figured out I was going to an abortion clinic.

Of course, there were also frustrated responses at what the driver had done.

There was a variety of reactions and opinions on what she should do next, but they all agreed that the driver had been irresponsible and strictly opinion-oriented. 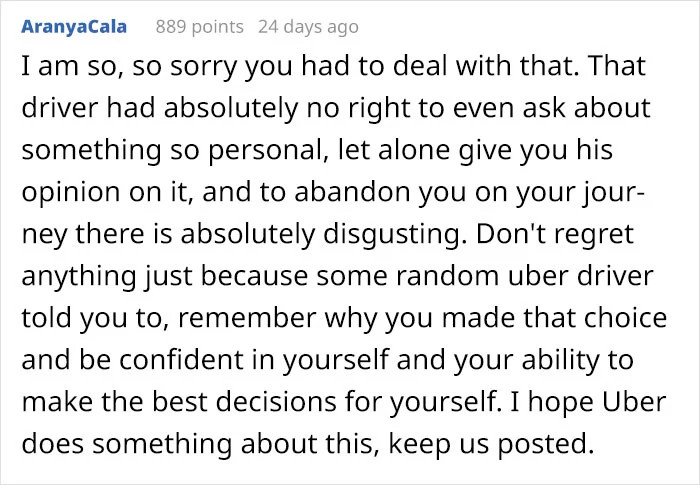 I'm hoping Uber took care of this the right way.