A form of worldwide sightseeing that has gained momentum of the last decade is that of abandoned locations and believed haunted locations.

In these locations guests re-live the histories, indulge the spooky claims and frequently take photographs either of the location itself or of themselves in the location. Australia is home to a lot of these locations, many of which have rich back stories connected to Australian history that go back to the 1800s.

Here are a selection of these abandoned and believed haunted locations that are a must visit if you are a fan of spooky and abandoned locations.

The tale behind this pool involves married woman, Oolana of Yidnji who fell in love with another man from a passing tribe. The pair planned to flee together but before doing so were caught by the woman’s husband.

To avoid him she threw herself into the water and asked her new man to follow but when she looked back he was leaving with his tribe. It is believed that she haunts the pool, luring young men to their death. To this day sixteen young men have lost their lives, having seemingly been held under the water by an invisible force. 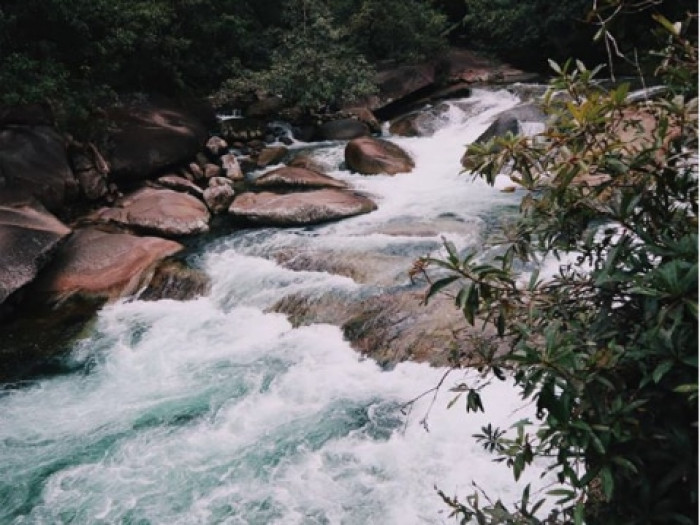 Also known as Mayday Hills, this location is it to be a hotspot for ghost hunters. There have been many accounts of unexplained figures walking the halls and interacting with visitors to this location. This asylum closed in 1995 after 128 years of operation. At its peak the asylum had around 1200 patients. It is believed that the doctors would put patients in shackles, pull teeth and even subject them to electroshock therapy. Many of the patients were buried on grounds with unmarked graves and it is believed that their spirits still want the asylum. 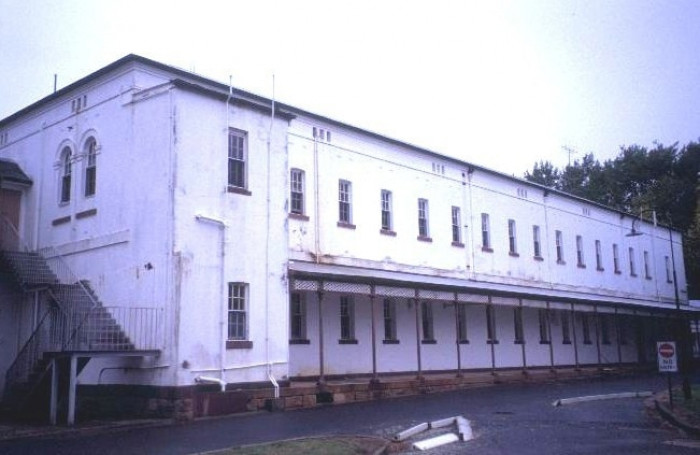 via: Heritage Council of Victoria

The Waterfall Sanatorium is located an hour south of Sydney. It was built to treat thousands of patients of varying ages with advanced stages of tuberculosis between 1909 and 1958 (most of them against their will). These patients were not released until such time that they were cured although many were not so fortunate. Over 2000 of the patients have been buried at the on-site Garrawarra Cemetery. Ghost sightings at this location or rare although the concept of the location is haunting enough. This location is no longer accessible by foot and it is required to have permission by the government to walk the grounds. 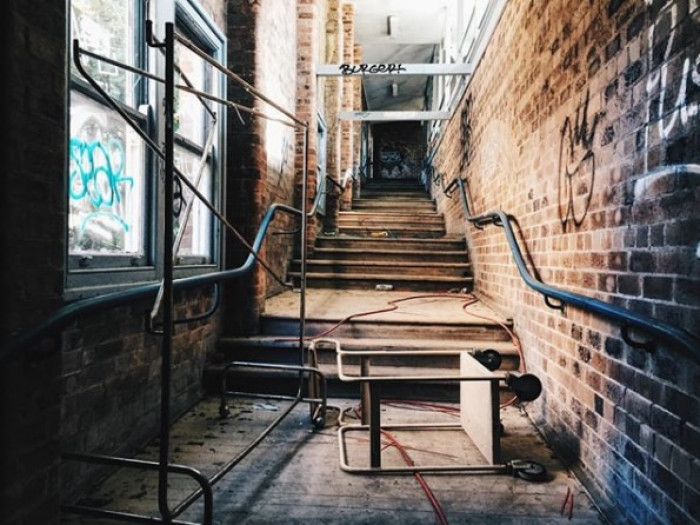 Not much is known about this abandoned cottage south of Brisbane or its previous owner. The cottage is filled with various old items that have collected dust over time. It is believed that this house has been like this for decades. 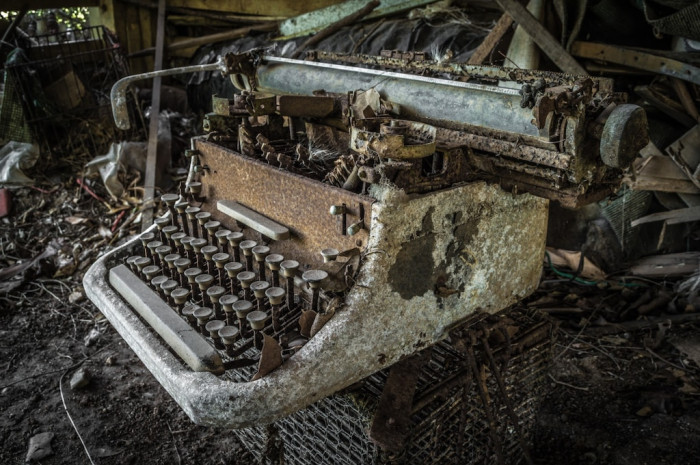 This location was built in the mid 1800s and housed some of Australia’s most notorious criminals. A notable example of this is the famous bushranger Ned Kelly who was jailed and executed at this location in 1880. 130 inmates saw the final moments in the gallows that today host weekly ghost and hangman tours, searching for spirits.

This location services are reminder of the conditions in a 19th century prison. 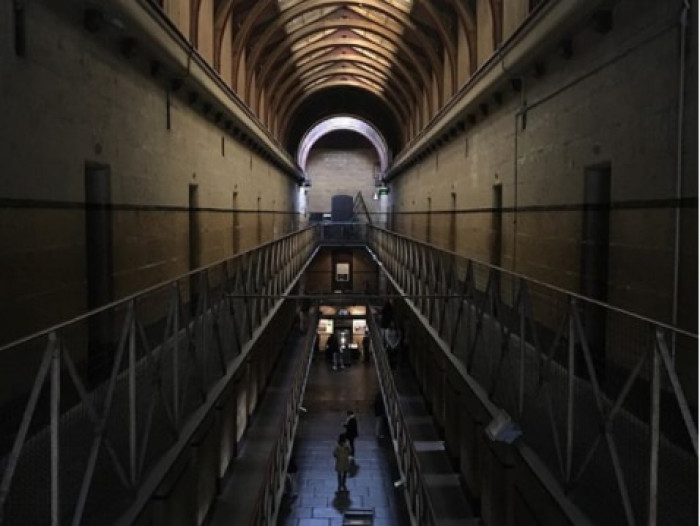 This location is considered one of the most haunted locations in South Australia. It is said to be visited by many of the violent criminals and guards that walked its halls. One of these figures is Ben Ellis, Hangman for the jail between the mid 1860s to 1870s. Ellis was known to be precise and that his kills were instantaneous. However due to error, one prisoner was hung alive for 22 minutes before his death. Many have claim to have seen Ellis’ spirit walking the halls, potentially to atone for this error.

This location is where South Australia's criminally insane were locked up for nearly 100 years (Between 1888 and 1973). It housed over 1500 predominantly male patients. This location was originally called ‘L Ward’ until 1932 to avoid the phonetic link to Hell ward. During the operation of the asylum there had been 80 deaths of inmates and staff alike. Visitors have been known to experience patching and touching from the spirits. It is also claimed that male visitors are targeted most. 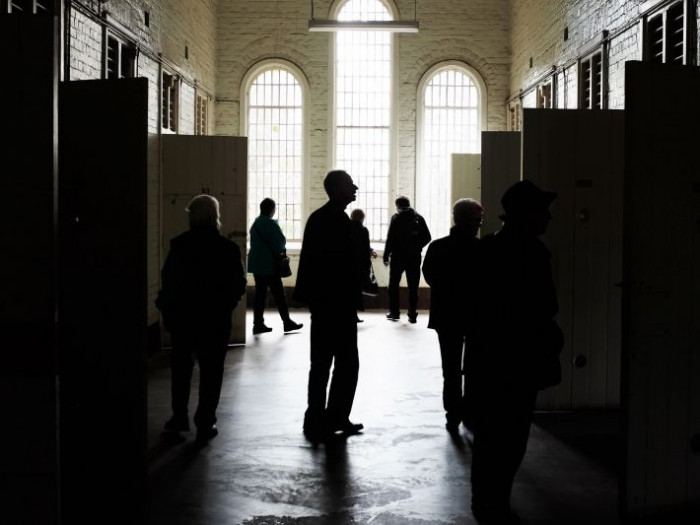 via: National Trust of South Australia

Port Arthur is considered to be one of the most haunted locations in Australia. Is even referred to as Hell on Earth. This Tasmanian town became a prison settlement in 1883 for male convicts. Port Arthur contained over 1000 people who believed to have died on its grounds. In 1996 it was the scene of the Port Arthur massacre that took the lives of 35 visitors to the town. This location is known to have seen over 2000 operations over the last 20 years. 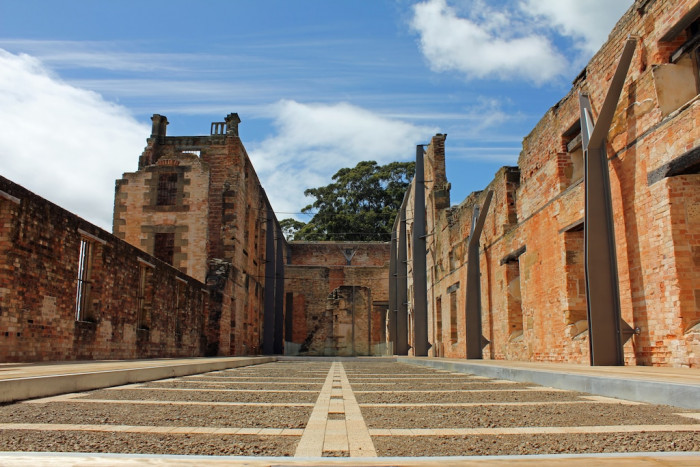 This Homestead overlooking the Township of Junee, New South Wales has an extensive, tragic, history. The previous owner of the location was known to be a reclusive woman who reportedly still walks the halls today. It is believed that a string of horrific events took place in the building.

Sightings include the bloodied body of a woman who fell off a balcony who is still seen in that location, cries from the coachhouse believed to be made by a stable boy who had burnt alive as well as appearances by a mentally disabled man who had been changed to his bed for 40 years. This individual is known to make his presence known with the sound of his chains. 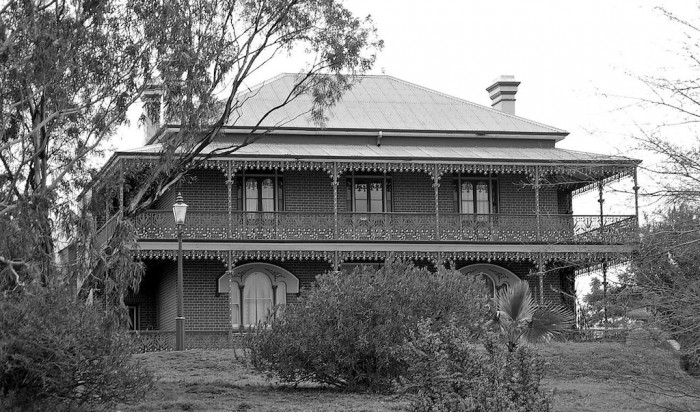 This location was Sydney’s first psychiatric hospital having opened in 1838. The hospital also known as ‘Tarban Creek Lunatic Asylum’ has had a sinister history. This hospital held its patients in prison like conditions and was to known to mistreat patients with overcrowding, physical and sexual abuse as well as violent shock treatments that left patients with burn marks on their heads. The hospital closed in 1997 after having run for over 150 years. If claims are to be believed there are over 1200 and anonymous bodies buried in mass graves underneath the hospital. The many reports of operations in this location have made it one of Sydney‘s most haunted locations. 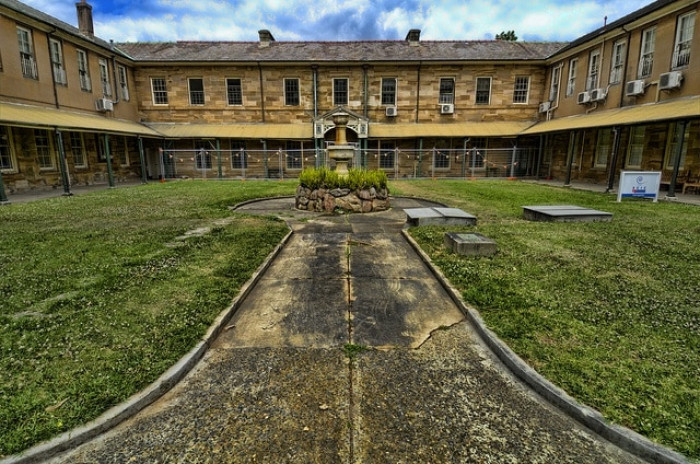 This location will set up for migrants that landed at the shoreline near the location to ensure that diseases like smallpox and Spanish influenza were not spread. Out of the 13,000 individuals the past through until its closure in 1984, 500 died in agony. It is believe they still walk the halls to this day, haunting the corridors, the showers and the attached morgue.

This location is now a tourist attraction that frequently holds ghost Tours. 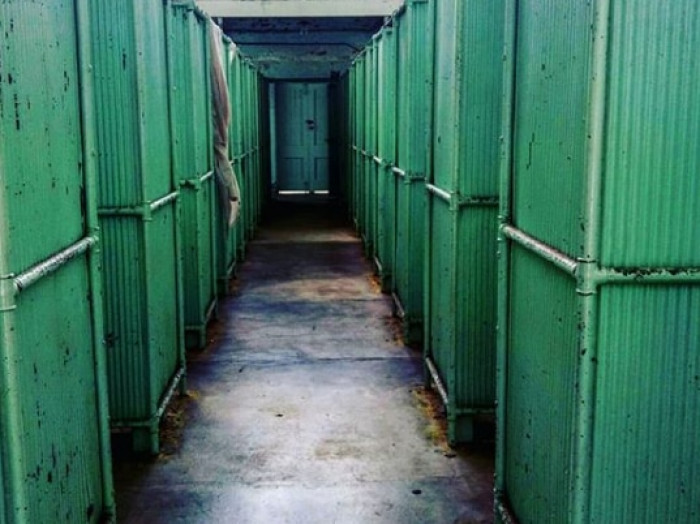 This location has been home to many of the worlds most infamous killers including backpacker killer Ivan Milat. The prisons disciplinary regime included starvation, floggings and hosted 16 public hangings with many more believed to not be recorded.

This location has been re-purposed for regular ghost Tours. 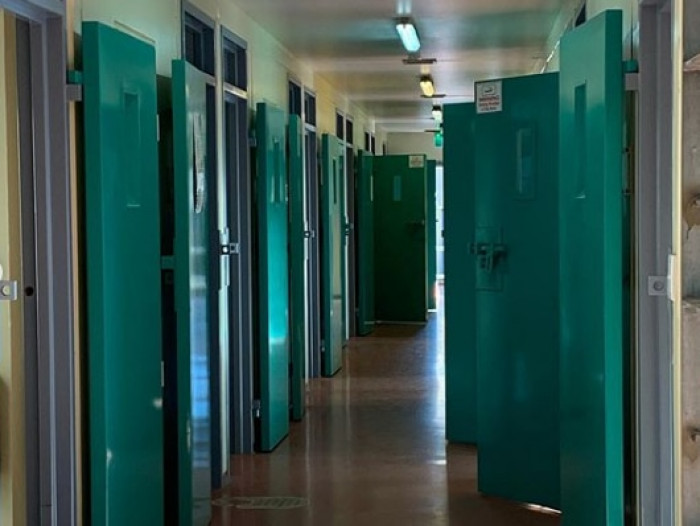 These tunnels were built in the 1880s but we abandoned less than 30 years later which saw the rainforest around them take over. It is believed that the ghost of miner, Robert Hales, who was hit by a train in the location in 1895 haunts the tunnels. This location was a prime spot for ghost hunters but has become a home to many glowworms and has been blocked off from the public since 2018. 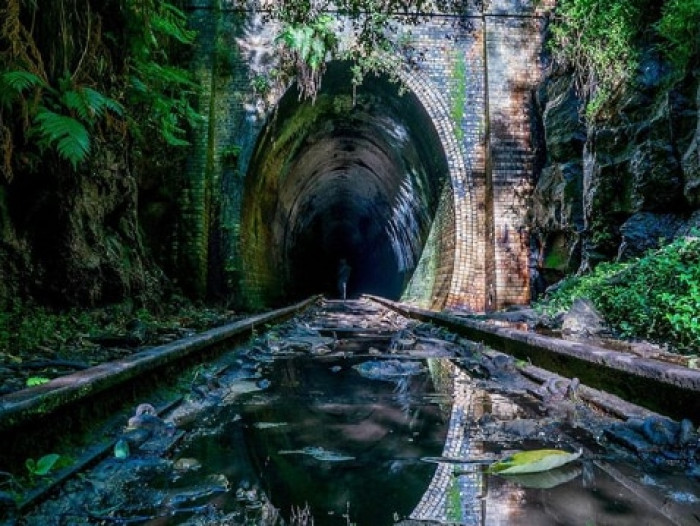 This penitentiary held chapel services for early convicts arriving in Australia. Little did they know, under the chapel floor were lines of cells. The spirits of over 40,000 prisoners are believed to still walk the halls today. This site is open to frequent ghost Tours. 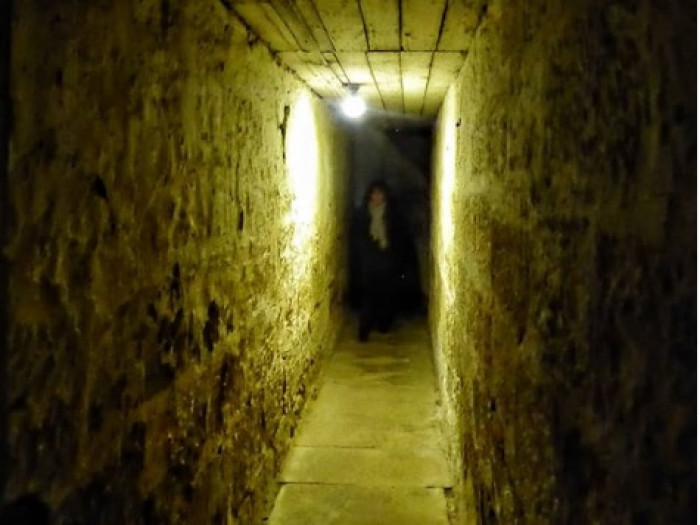 From 1913 until 1978, this orphanage was run by the Sisters of Mercy and the Catholic Church who took in more than 2,500 orphans and homeless individuals during World War II. The nuns were known to give out tough love and beatings. In the years since it has been vandalised and destroyed. Many consider it as part of "Australia's Bermuda Triangle of haunted places" with Kenmore Asylum and St Joseph's Orphanage. 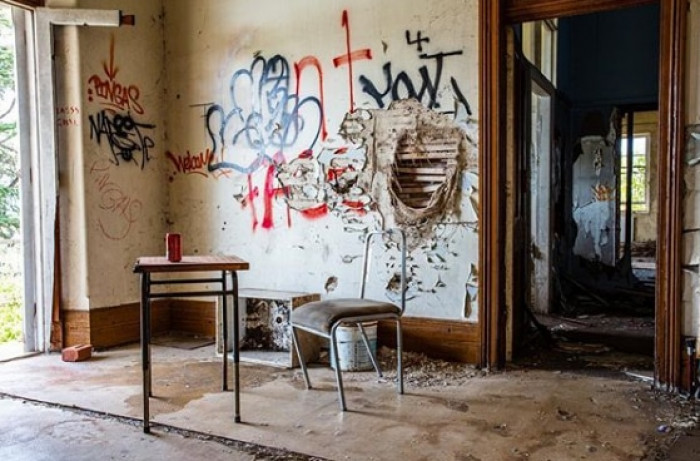 What do you think of these locations? Do you know of any other abandoned or haunted locations in Australia or around the world?